Comics 2014 is continuing along in fine fashion; today I bring you news of two honestly great-looking web-comics that you'll want to keep an eye on. First up is Jason Shiga, Eisner award-winning author f Fleep, Meanwhile and Empire State: a love story (or not), fame (also Bookhunter, which I've never been able to track down, goddammit!). I think most people know Shiga from his earlier work Fleep, in which a man awakes to find himself in a phone booth encased in concrete and with no memory, or Meanwhile, his widely acclaimed, innovative choose-your-own adventure comic which has over thousands of possible outcomes, and he's one of a few comic creators who always manages to keep things interesting. His last book, Empire State: a love story (or not), was a more straightforward narrative (still good), published in 2011, so this web-comic is his newest  comics work since then.

The comic, titled Demon, is already a few pages in and rather intriguingly set up- bookmark/favourite it now, I think you'll want to follow this one. It's accompanied by a few sentences of explanation from Shiga:

'Can’t talk too much about it yet but if you’re wondering why I haven’t put out a new book out in a while, it’s because I’ve been hard at work on a top secret project for the past 3 years.I’ll start posting pages every weekday starting Monday. Check back here for more info about the project itself. And in the meantime, enjoy the poster.'

Another fantastic-looking web-comic which launched recently is Drew Weing's The Creepy Case-files of Margo Maloo. Weing's comic updates several pages at a time, every Monday, and although there's no formal description, you can see where it's heading: a boy- Charles- and his parents moving into a new town- and namely, a huge block of ominous-looking brown flats. I know secret-harbouring mysterious flats when I see them, and these ones are definitely of the type.

Weing is the author of (the by all accounts excellent) Set to Sea from Fantagraphics, another of those endless books I've been meaning to get around to, and now definitely will. Love the art style here, too- lovely colours, detailed and clear. I'm not very good at keeping up with web-comic, but I'm going to make an effort with these two -and you should, too! 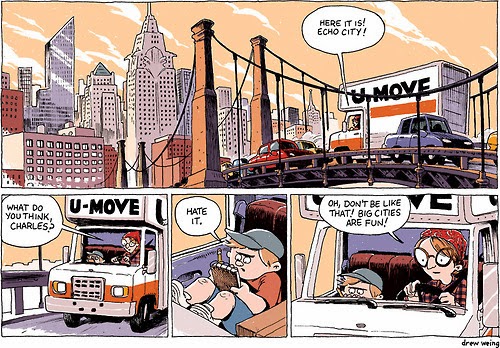 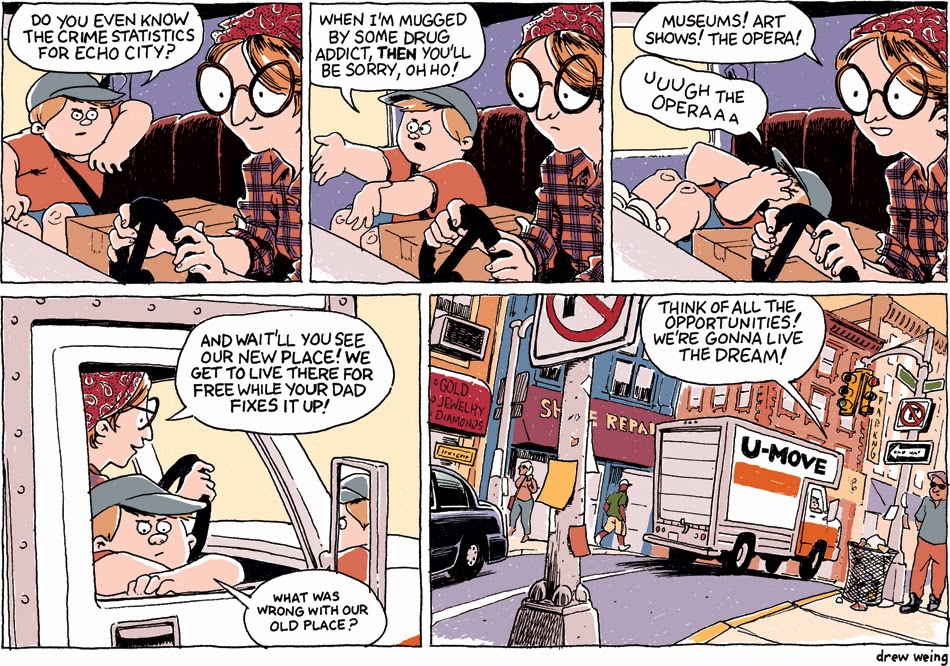