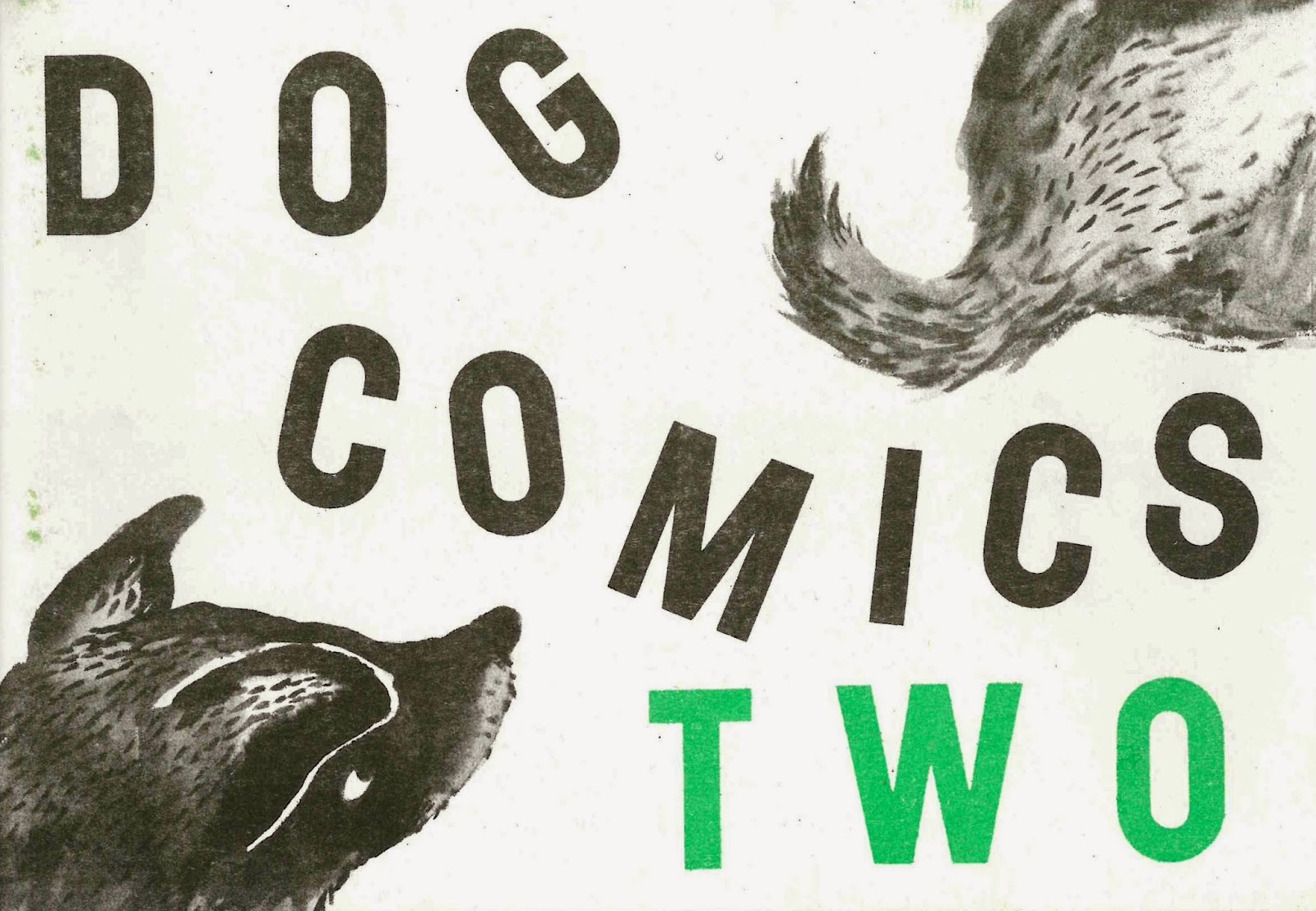 When I get review copy requests, I check the work out a little, see if it's something I may be interested in and then respond accordingly, always with the disclaimer that I cover books at my own discretion, and after reading them. I wasn't aware of Dog Comics before editor Rose Robbins got in touch, but I was familiar with a number of the contributors, so I asked her to send along a copy. I must admit in the back of my mind to thinking something along the lines of 'dog comics? an anthology about dogs?!' I can now honestly say I cannot remember an occasion on which I have been more wrong and more surprised and pleased to be wrong, about a comic.

Dog Comics, is (yes) ostensibly a comics anthology about dogs, but the theme is so widely and cleverly interpreted that it encompasses a breadth of experiences and emotions. Featuring a green and black two-colour scheme, It is beautifully edited and curated by Robbins, in the selection and pulling together of artists, the sequenced ordering of the strips, each which complements the one before it in tone and style. You don't often think of editing in comics anthologies, but the smooth cohesiveness and rhythm is a credit to Robbins vision and abilities. The landscape layout really works here, and is used in a variety of ways: 8 panel grids, 12 panel grids, 2 panel pages, full out drawing every space of the page, whole page spreads, double page spreads and on and on. The quality of contributions is ridiculously high, with a real range of illustrative techniques on display; often in an comics anthology you get a few differing styles, but almost each of these is truly distinctive and of its own.

The content stretches from bizarre, humorous, reflective, cute, surreal, joyous, poignant- the full gamut. Naomi Wilkinsons'  beautiful, almost lino-cut, pattern strip of a happily dreaming dog gallivanting in the park, growing huge enough to give his owners a ride on his back, then waking up safely ensconced with his family. Robert Ramsden's delightful Shirley Hughes-reminiscent instances of a boy and his dog hiding, sitting, rolling around together. Donya Todd and Jack Teagle's strips are lovely and light, featuring Space Pup and Dogweena respectively; I'm such a fan of Todd's art style, it's cute without being saccharine, a little bit trippy, candy for your eyeballs. I have to admit to not always being party to the humour Teagle and Todd deploy, but these comics were charming and funny- and I understood them! Karoline Achille's 'Max' is gorgeously rendered and evocative, even in black and white, the leaves, dappled sunlight, shadows of the trees and the effortless yet exact manner in which Achilles conveys the movement of Max's jumping, running frames as he bounds across the grass, jumps, stretches, plays.

Martha Hearn's 2-page, 6 vertical panelled comic is so much fun, I love the clean-ness of the lines and shapes, and the consideration for the black/white colours and how that's used to the best advantage. Disa Wallander brings her wry, off-beat tones to the page- an artist's hand struggles with a pen, as the dog drawn from it tugs at it's freshly-penned lead, pulling this way and that. Elena Arvelo Melville is another stand-out, her watercolour dogs languorously smiling, little rabbits set against faintly patterned rugs.

I could sit here all day and list the merits of each strip in Dog Comics, but I would really, really encourage you to buy a copy and experience it for yourself. I've never even had a dog (though I suspect if you do have one, your appreciation of this would increase 2 fold), but that doesn't matter, the comics are great because they simultaneously embrace and transcend their remit, and the visual goodness never wavers, meaning you're nothing other than engaged and immersed. A superb anthology.