January's a weird month: laborious, hungover, the days short and pensive, the nights long- it's enough to make even the most cheerful person a bit depressed. This year I made a couple of intentions where my writing was concerned- write a minimum of 500 words a day, update the blog every Mon, Weds, Thurs with a couple of pieces each. I have these conflicting notions, where I'll tell myself I do this because I enjoy it, so that means I should only do it when I feel like it, but essentially I know that the more I write the more I improve, and the easier it comes. The words flow in a progressively organic manner the more you write, which isn't to say you don't come across blocks, but there's a discernible difference in quality of output. There's also a discipline to sitting down and producing something- big or small- every day. It feels good. Towards the end of January til now it's been feeling very good, there's a rhythm to things, and I'm just having fun- I lost some of that last year.

That aside, I haven't done a badly photographed 'currently reading' post in a while, so what better way to ease into Monday, right? I think Oliver's taken it upon himself to educate me on the more high-end side of comics, so he lent me a load of stuff (and some James Stokoe, haha! I kid, I kid) which I'm yet to make a dent in: some Lorenzo Mattotti, an Italian graphic artist, whom I've heard a great deal about but never actually read- his style seems to lean towards fine art, David B, who I have read, but again is considered more literary. He's also lent me Igort's (aka Igor Tuveri) Baobab series, published with Fantagraphics; been reading a little about him, and he appears to be a really significant figure in comics, founding Italian imprint Coconino Press (who publish Gipi), successfully producing work for the Japanese market, and working in a variety of fields and styles. Really looking forward to reading these, but waiting until I can set some time aside and immerse myself a little. I'm interested in reading this sort of stuff, but historically, these are the kind of comics that I don't really connect with, though I can appreciate their merit and technical ability. But we'll see how it goes. The Baobab books look especially great.

Sullivan's Sluggers... that whole sorry saga... Oliver backed the Kickstarter and has still yet to receive his book- this is a copy he actually was gifted for his birthday! It's illustrated by James Stokoe, which is what matters and why we're on board. 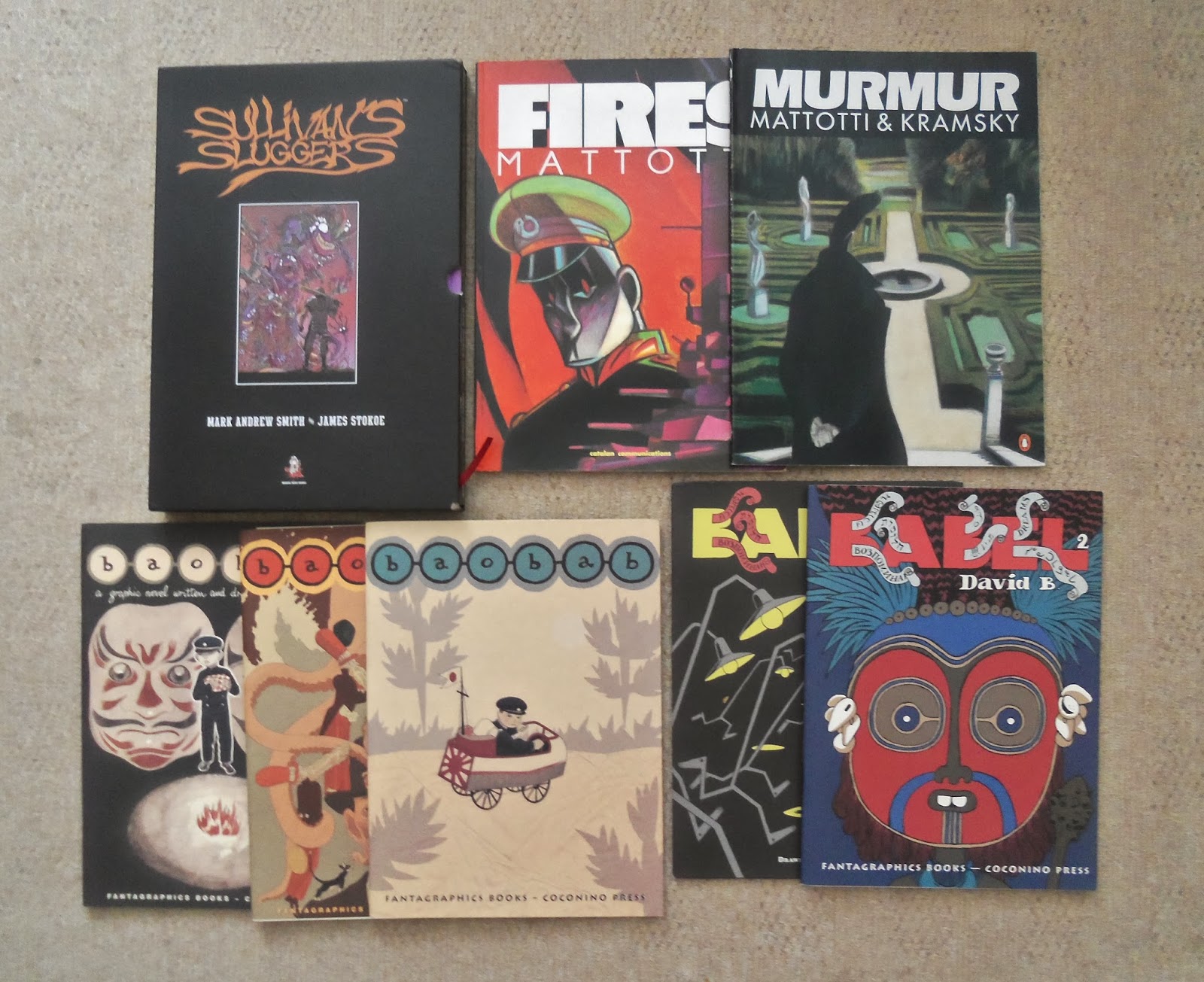 Yesterday's Tomorrows is a collection of Rian Huges work (I've actually managed to read the whole of this one). I picked up Tales from Beyond Science last year when it was ridiculously cheap, and it was fantastic- like a humorous, British version of the X-Files. Hughes art accentuated the nuances of each story, penned by various writers. 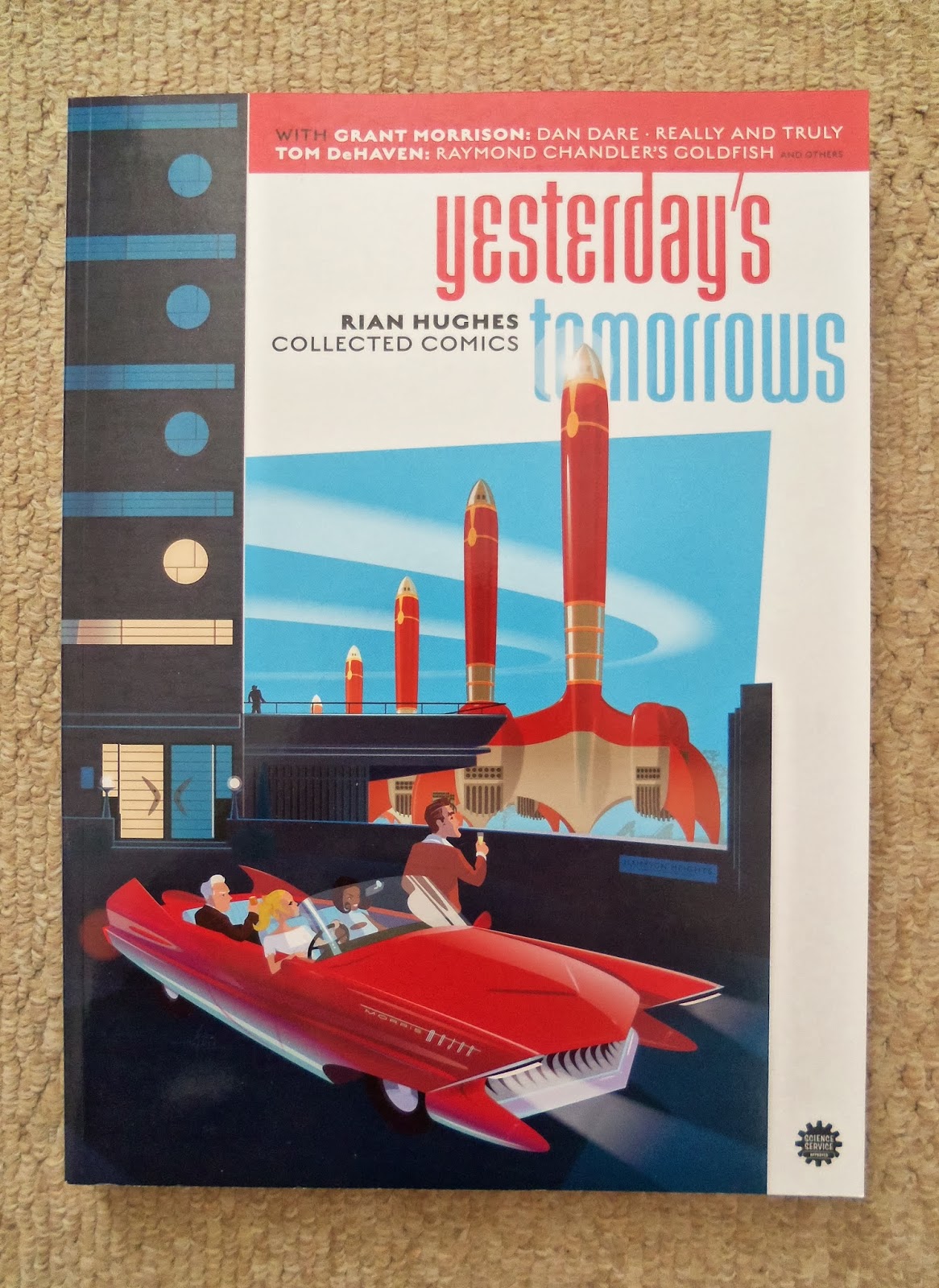 This collection, released in 2011, includes Grant Morrison's superb, futuristic re-imagining of British sci-fi hero and pilot, Dan Dare (originally serialised in Revolver), ostensibly a political critique that's surprisingly (or not so surprisingly) relevant today. I didn't realise until I was reading, but Hughes also illustrated Goldfish, an adaptation of Raymond Chandler's Phillip Marlowe story, also collected in the adventurously titled Raymond Chandler's Marlowe: the authorised Philip Marlowe graphic novel, which I already own. If you like Darwyn Cooke's Parker comics, you'll most certainly like this, it's as on-point as adaptations get. I'd say the collection is honestly worth buying for either one of those stories alone; there's a couple more stories in there, as well as some art and design material: card designs, concepts, pin-ups, etc. If you've not read or seen any of Hughes work before, it serves as an ideal introduction.

Here's some pictures of the pin-ups and more: 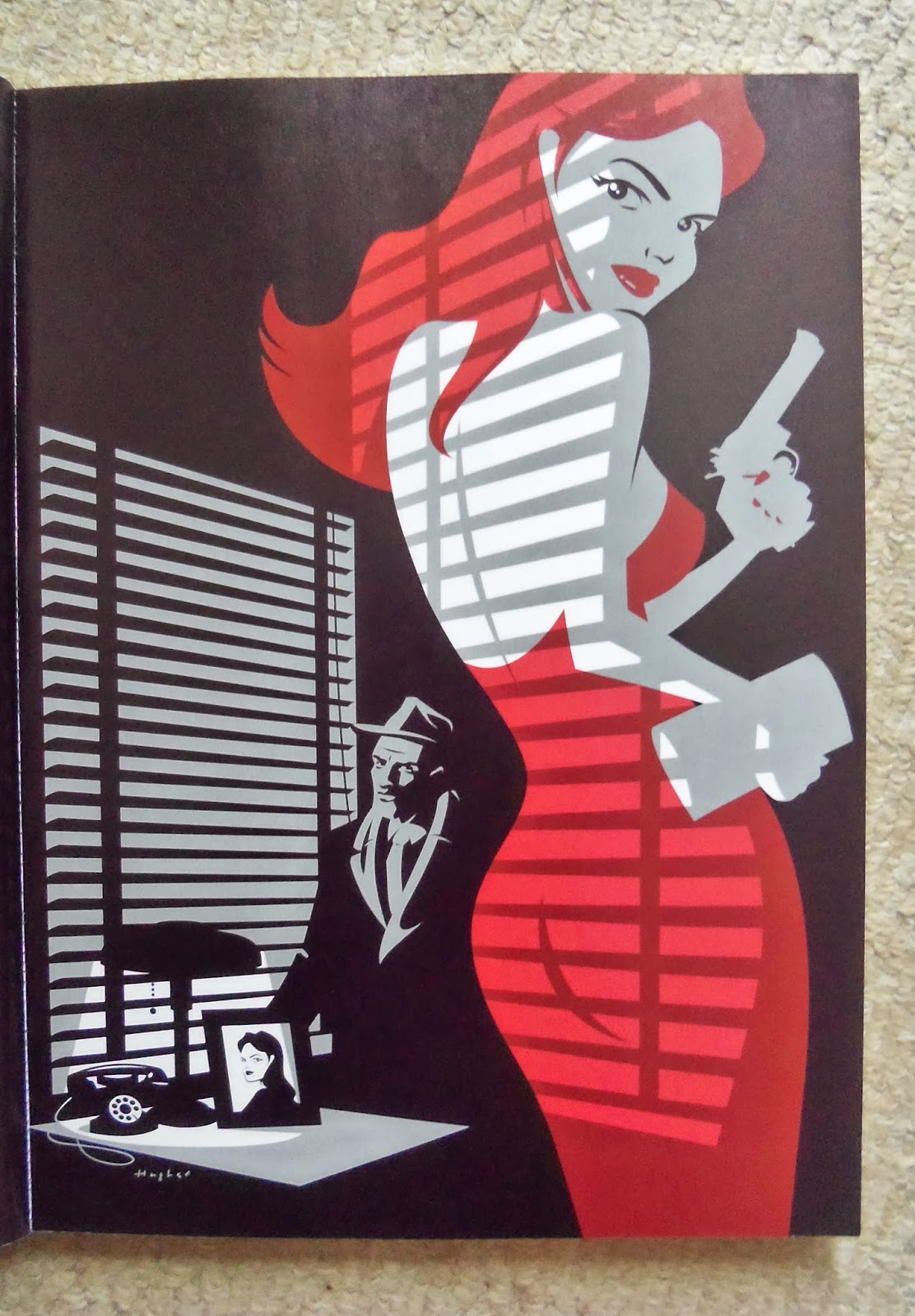 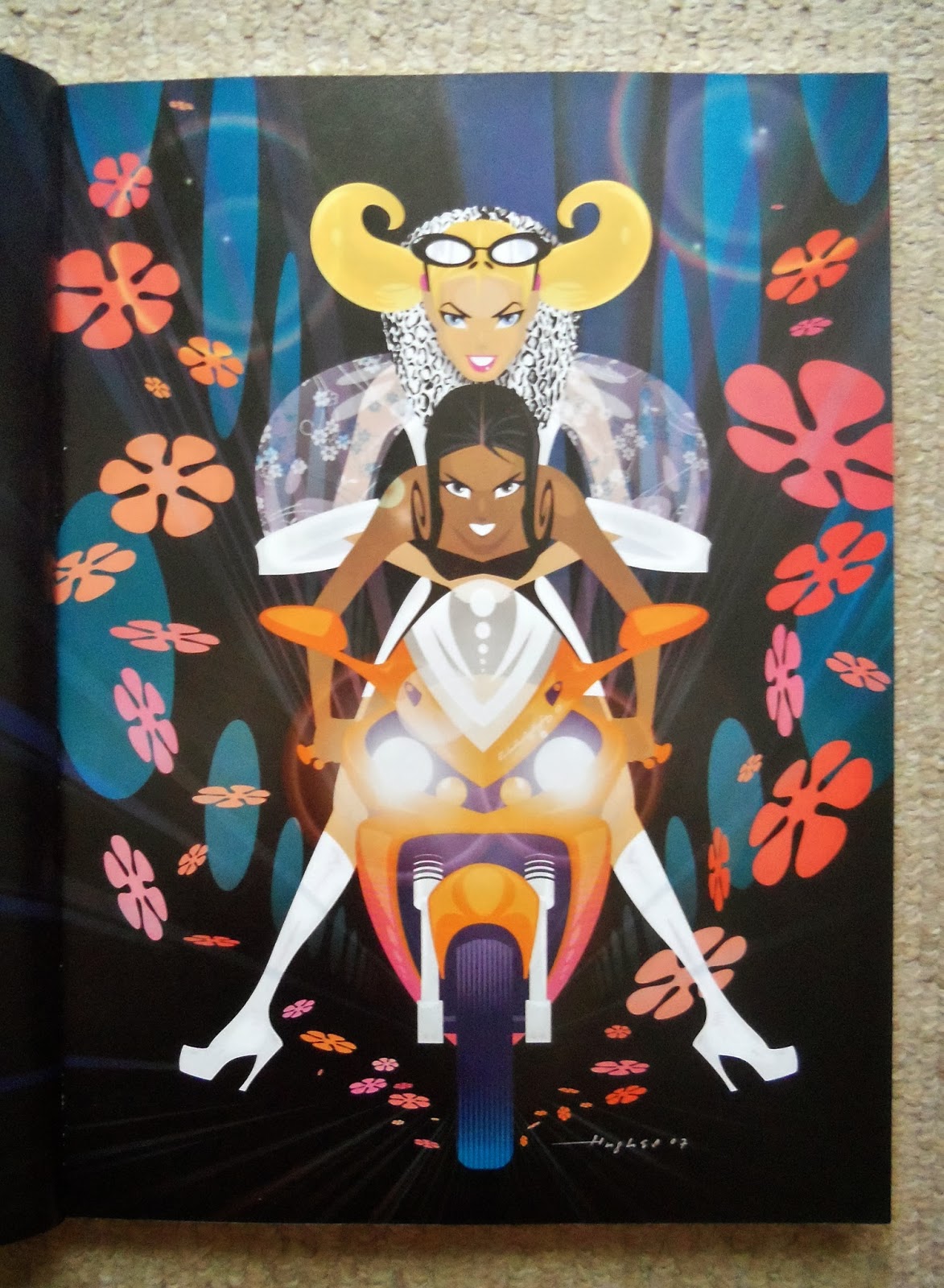 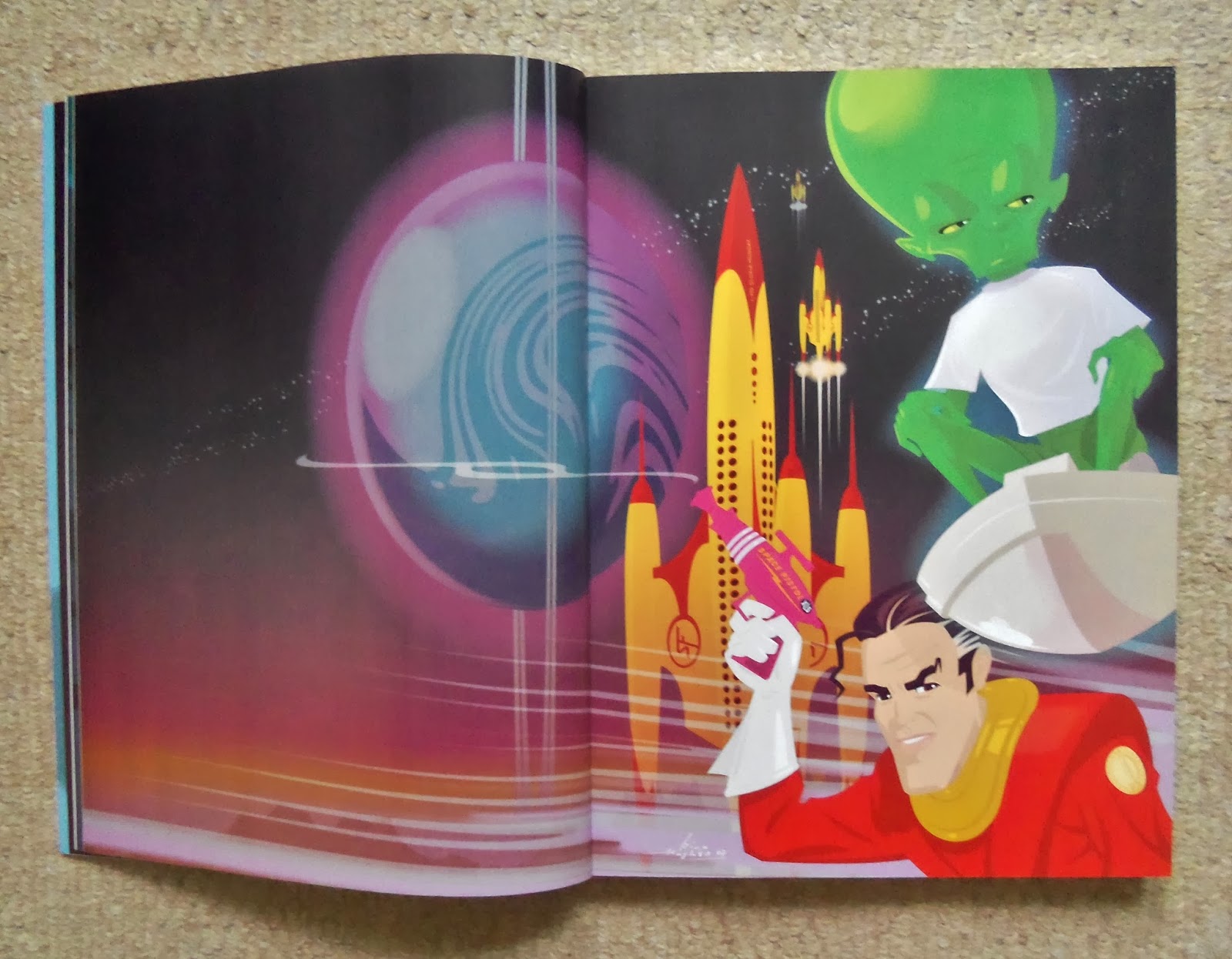 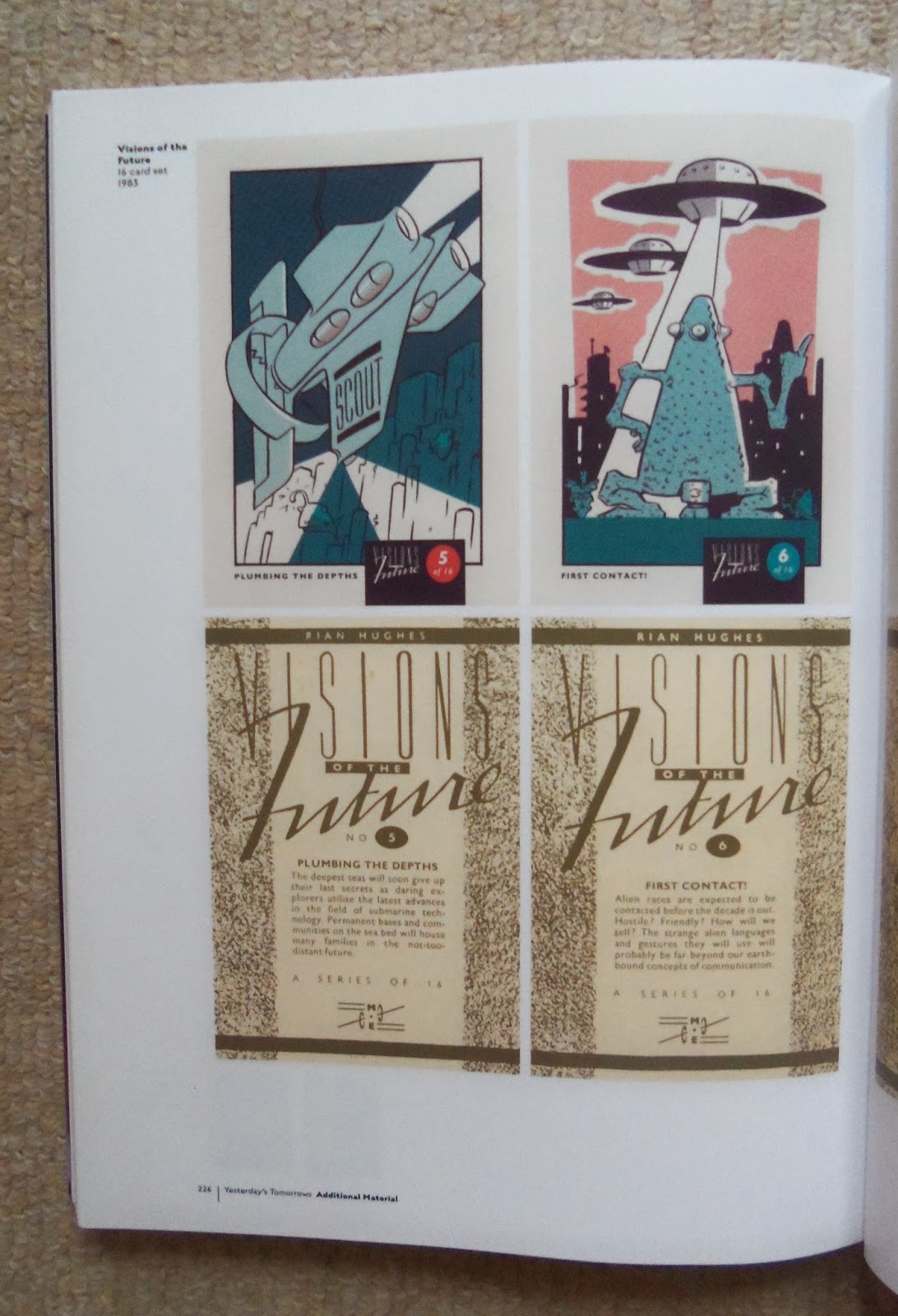 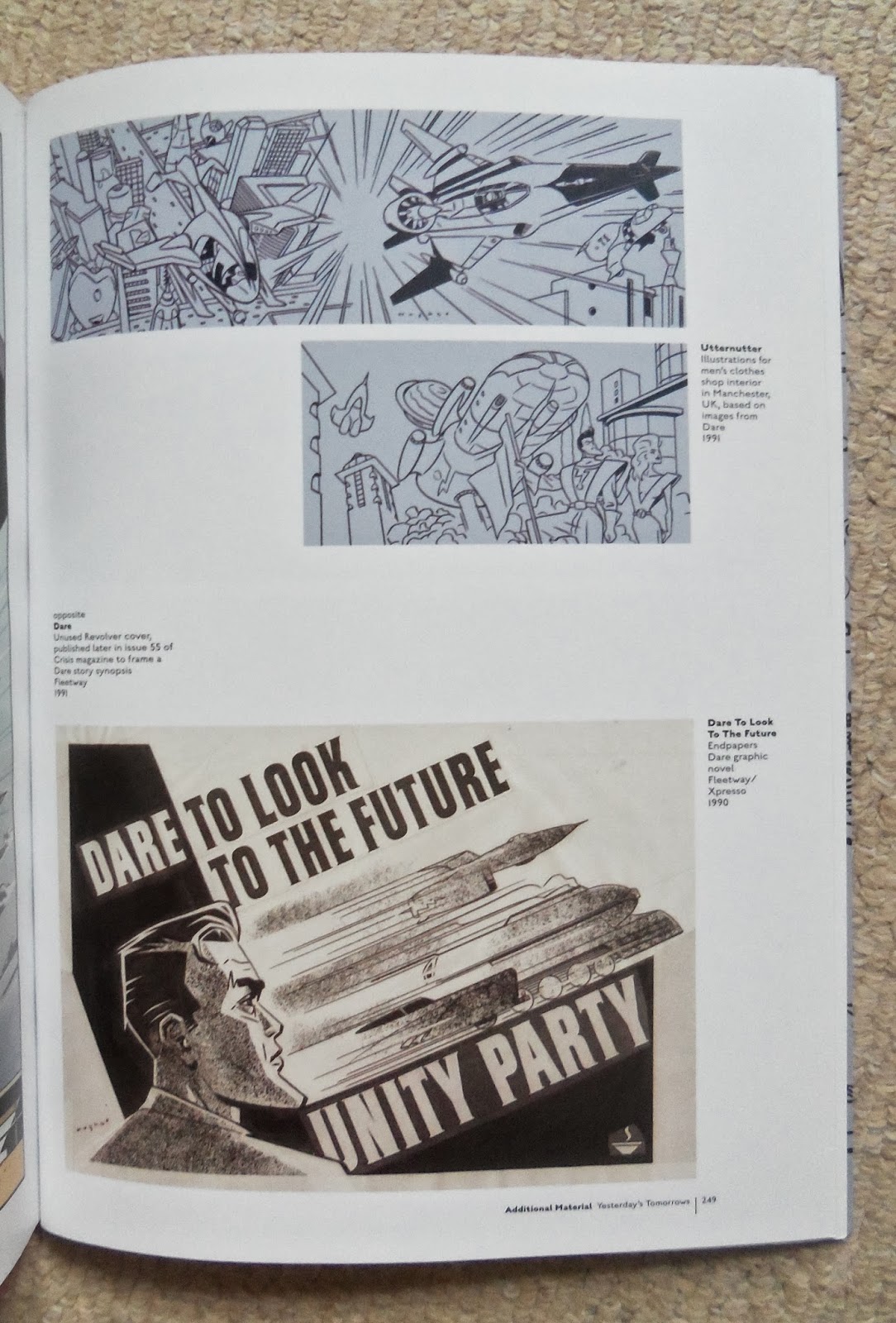 There's not a great deal of Sergio Toppi's work available in English- even this book, Sharaz De: tales from the Arabian Nights, published by Archaia, quickly went out of print when it was released in 2000. Last year's second printing will probably go the same way, so having missed out the first time, I nabbed a copy from the store while we still had some. Toppi is another of those comics creators whose artwork isn't any derivation of the traditional cartoony aesthetic, but again more fine art-esqe: glorious and proud, the border-less, panel-less images gnarly and evocative. I think this interpretation of the Arabian Nights tales has Toppi drawing deep on the mythic elements of the stories, and the influence of the spiritual on the everyday. 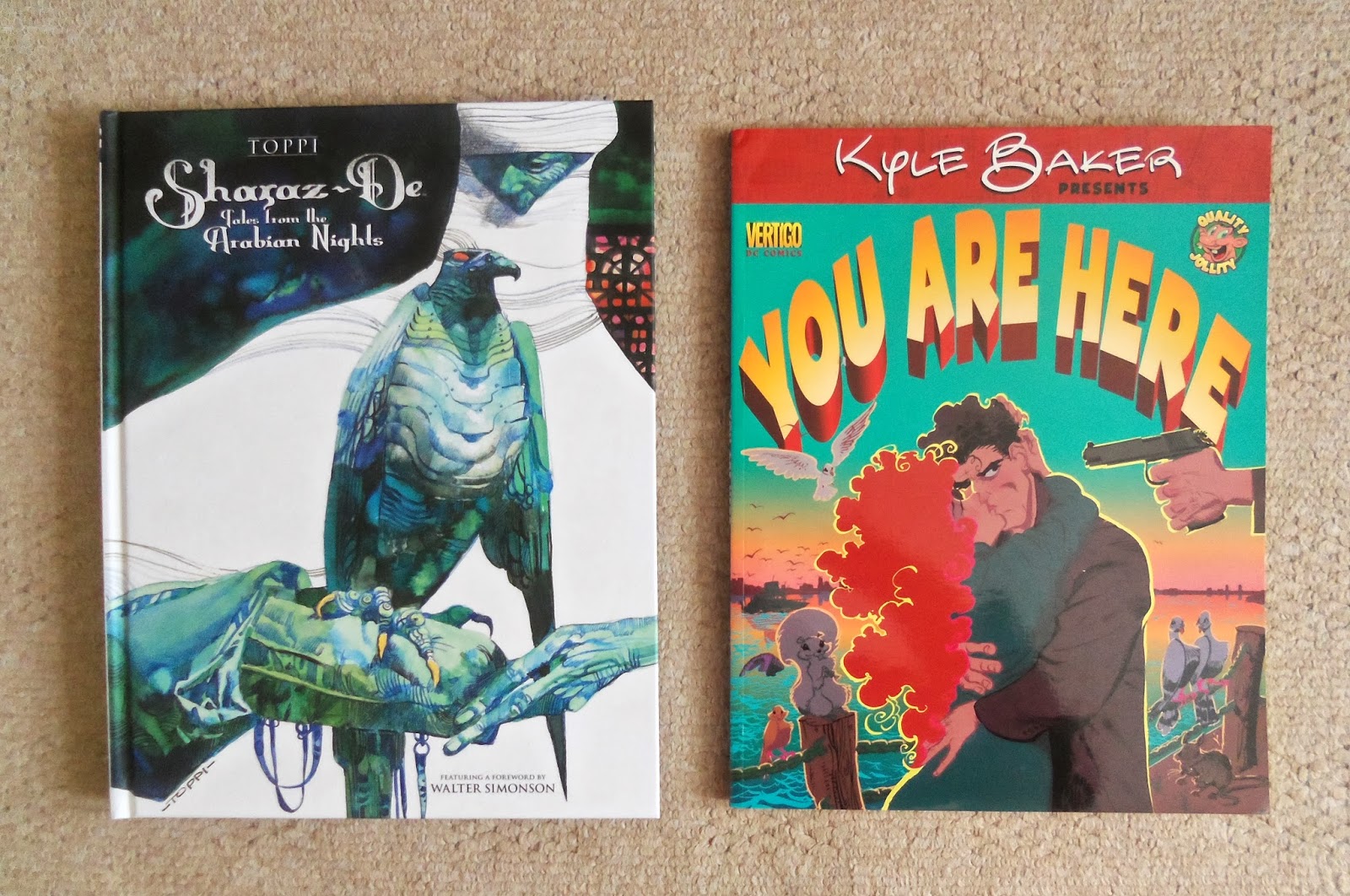 Kyle Baker's You Are Here- I read Why I Hate Saturn (apparently considered his breakthrough work)a few months ago and it blew me away. Why isn't Baker talked about more when we talk about the great comics creators- that book itself is deserving of a higher place in comics history. Here's an interesting quote where Baker discusses how Saturn came about:

'I wrote Why I Hate Saturn at a time when comic books had stopped being fun for me. I was tired of being told how to draw and what to draw. And I was sick of begging people to let me work the way I wanted. Editors told me my stuff was 'underground' and 'alternative'. I decided that if I were going to work in a creatively oppressive atmosphere and not even be allowed to own my work, I might as well go to Hollywood and be oppressed for big money. Back in the eighties, DC and Marvel wouldn't let you own your characters, and Fantagraphics had no money.'

According to Wikipedia, he was still sporadically producing material for Marvel as far back as 2007- and winning awards for it, too, but this is one of the things I find so weird about comics: why isn't someone paying a talent like Bakers to do his thing? It flabbergasts me, especially when you look at a lot of the things that are being churned out. Anyway, I'm enormously excited about reading this, and tracking down more of his work, I mean, seriously, just look at the cartooning and colours in the pages below, those room scenes from various angles- fucking amazing. 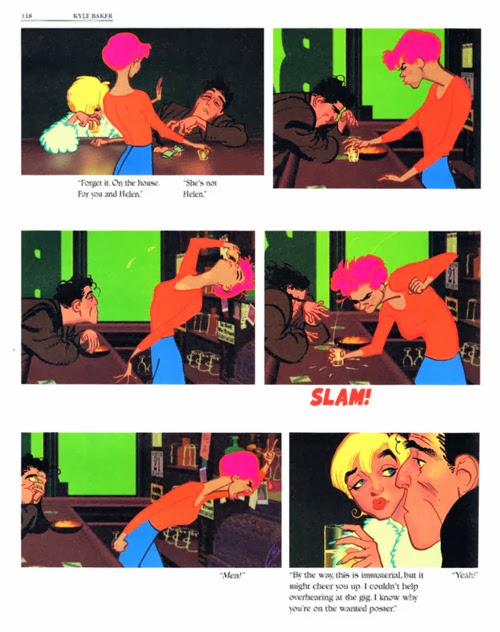 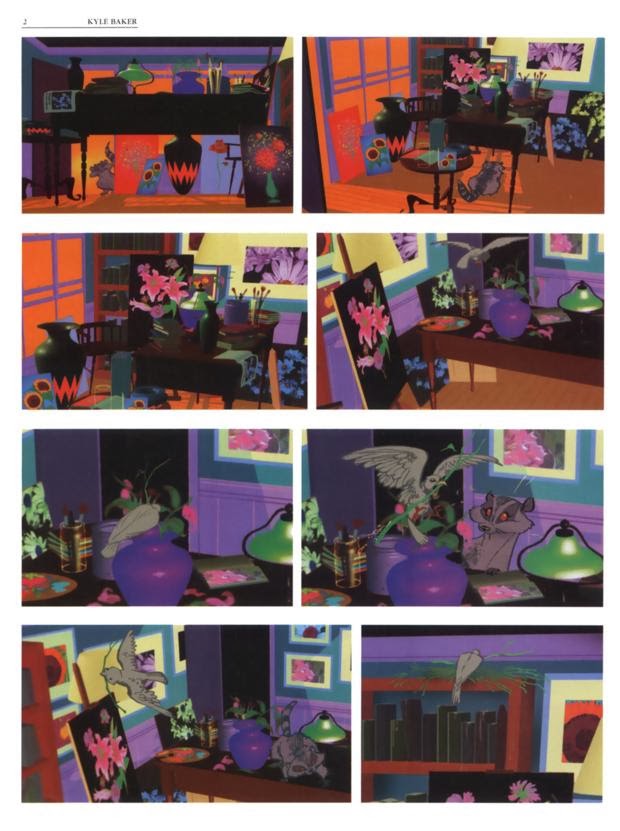 And, finally, a couple of great commissions from Josh Shepherd- Godzilla and Tintin. I'll have some proper writing and news up later today, I promise. 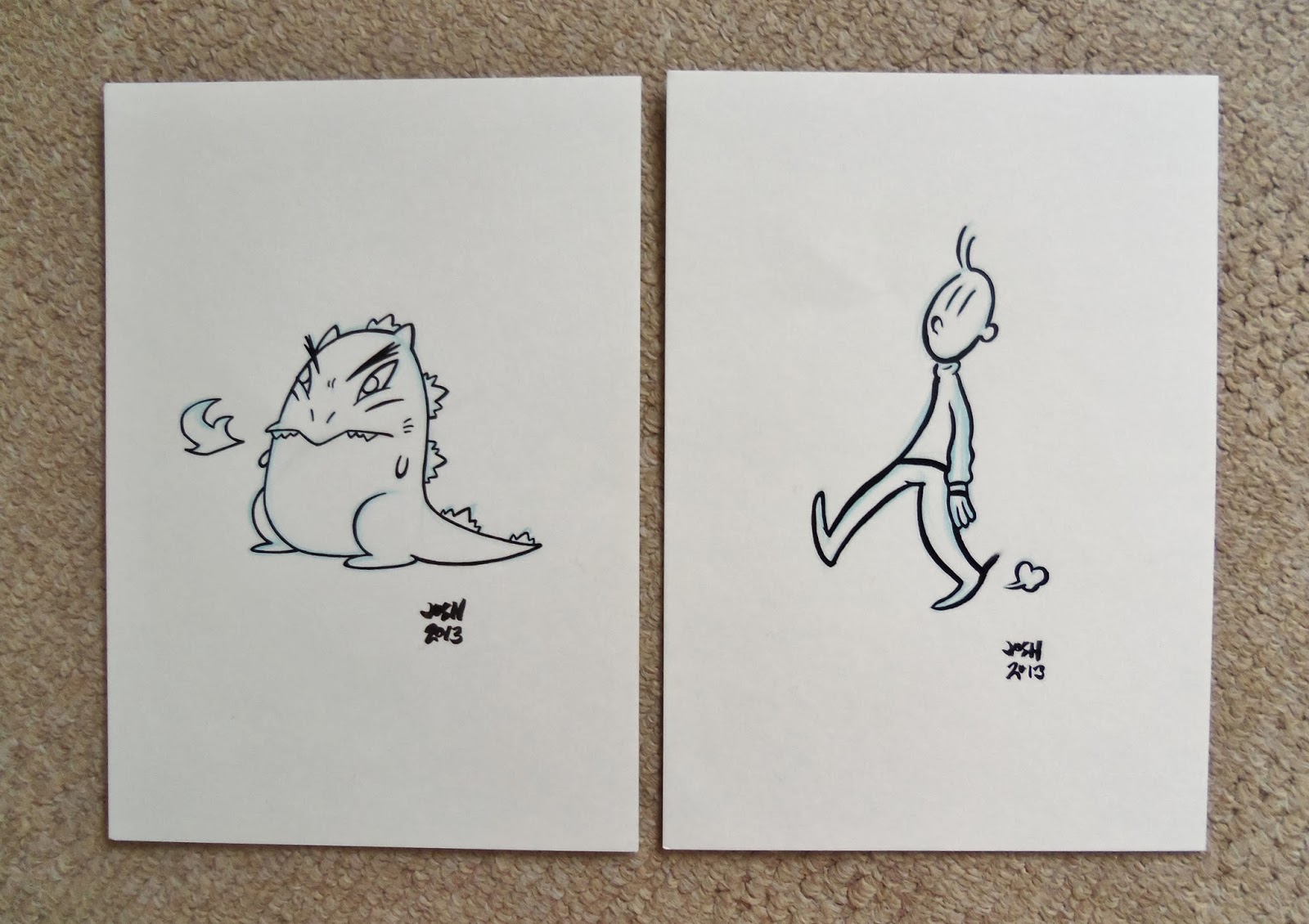