I've been disappointed by the amount of coverage Angouleme's sponsorship with SodaStream, and the subsequent protesting of it by professional cartoonists has received in the comics media. Part of that may be due to what the definitions of comics sees to encompass in the US and UK, and the niche interest in anything beyond that, and part of it seems to be a deliberate effort on Angouleme's behalf to keep the association with the Israeli drinks company as low-key as possible: with many unaware that SodaStream were a sponsor of the festival until late on Thursday last week, when the 'Drop SodaStream' protest was announced.

Cartoonists from around the world have put their names to a letter urging festival director, Frank Bondoux, to end the affiliation, with former Grand Prix winner, Jacques Tardi, being the latest signatory to back the protest. Tardi's work was the subject of an extensive, and extremely popular, special exhibition at Angouleme this year, but he is quoted in Le Monde as stating that had he known SodaStream were funding the festival, he would not have given permission for his work to be displayed. Tardi and his wife, Dominique Grange, whose music was an accompanying feature to the exhibition, also released the following statement:

"We believe, as artists participating in the Festival (which, however, we are not attending), that it is as if we have been taken hostage by those who run it and have not felt it necessary to inform us that this year's event was partly funded by a company based in the Occupied Palestinian Territories, and endorsing the settlement policy of the State of Israel, the Gaza blockade and recurring human rights violations of the Palestinian people!" 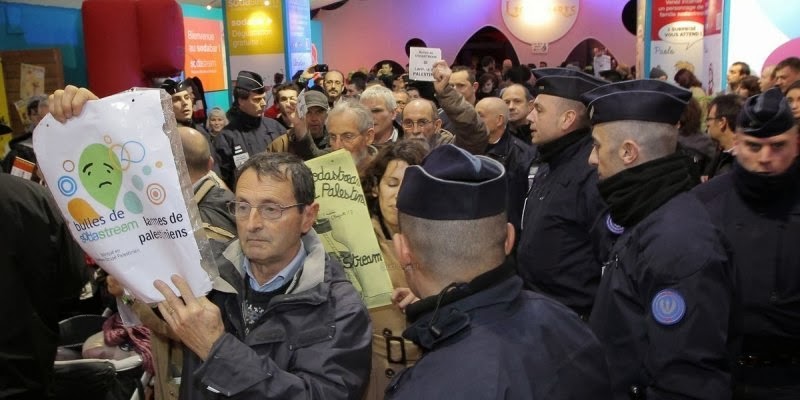 French website, Sud Ouest, reports on a a small demonstration held at festival grounds on Sunday, which saw 15 activists peacefully enter the SodaStream tent to distribute leaflets and posters, where they were   forcibly removed by police. Meanwhile, in their latest update, the 'Drop SodaStream' organisers state that,

'French media have reported that Bondoux has refused entirely to consider dropping SodaStream, instead defending the location of its primary factory in the West Bank settlement of Mishor Adumim. All of Israel's settlements in the Occupied West Bank are illegal under internationl law, and SodaStream's factory in specific was build on land seized from several Palestinian villages in what is regarded as the largest single act of expropriation by the Israeli government in its 47-year long military occupation of the West Bank.

Organizers of the open letter continue to call for more artists to join their call to increase the pressure on the Festival, and have promised to continue and expand their efforts to ensure that next year's festival does not include the SodaStream partnership.'

If you're a cartoonist, and would like to endorse and put your name to the letter, simply send an email to  lettertoangouleme@gmail.com

A full list of the signatories to the letter can be found at: lettertoangouleme.tumblr.com
Posted by Zainab at 10:10