All I seem to do nowadays is produce lists. But it's International Woman's Day and this is my opportunity to share with you some of my favourite cartoonists- who also happen to be women. I get to talk about cartoonists who excite me in a semi-validated way, and it also saves me from, y'know, actually writing a proper article or anything. I promise you-  there is some amazing work waiting to be discovered here. Read on! 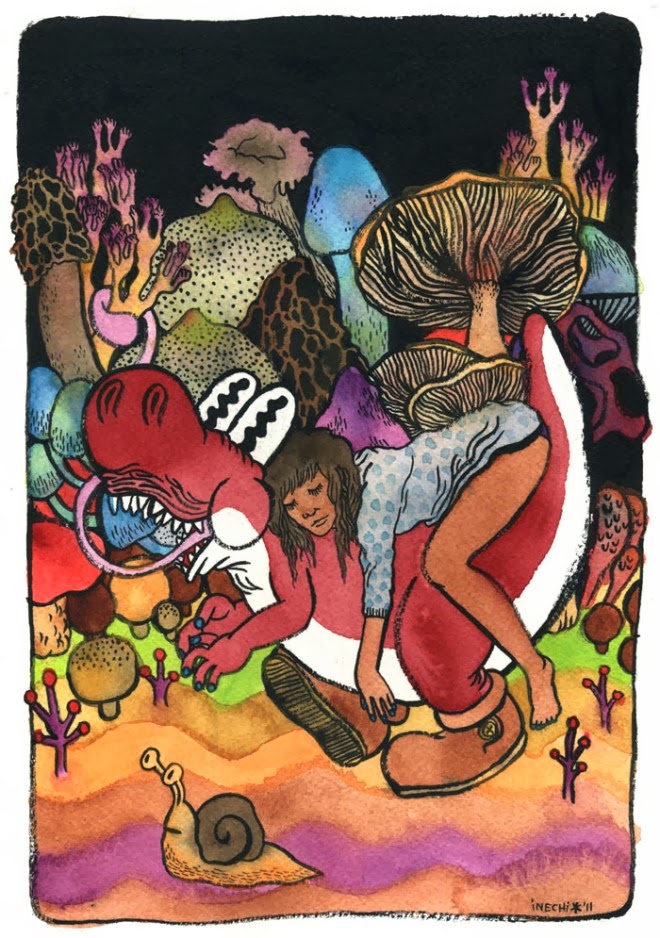 Ines Estrada: Hailing from Mexico, Estrada is a supremely confident and accomplished cartoonist, who can coax colours and translucence from her paints, the likes of which you will have never seen before. Her work may wander into the dream-like deserts of consciousness, and be rendered in psychedelic tones, yet there is always some very real experience or thing at its heart. Estrada is a prime example of a comics multi-tasker and community cultivator: as well as making weekly comics for Vice Mexico, she also writes reviews for the magazine, on top of which she runs the online boutique, Gatosaurio, collaborating with various artists to create zines and the most gorgeous stickers, and publishing her own books. 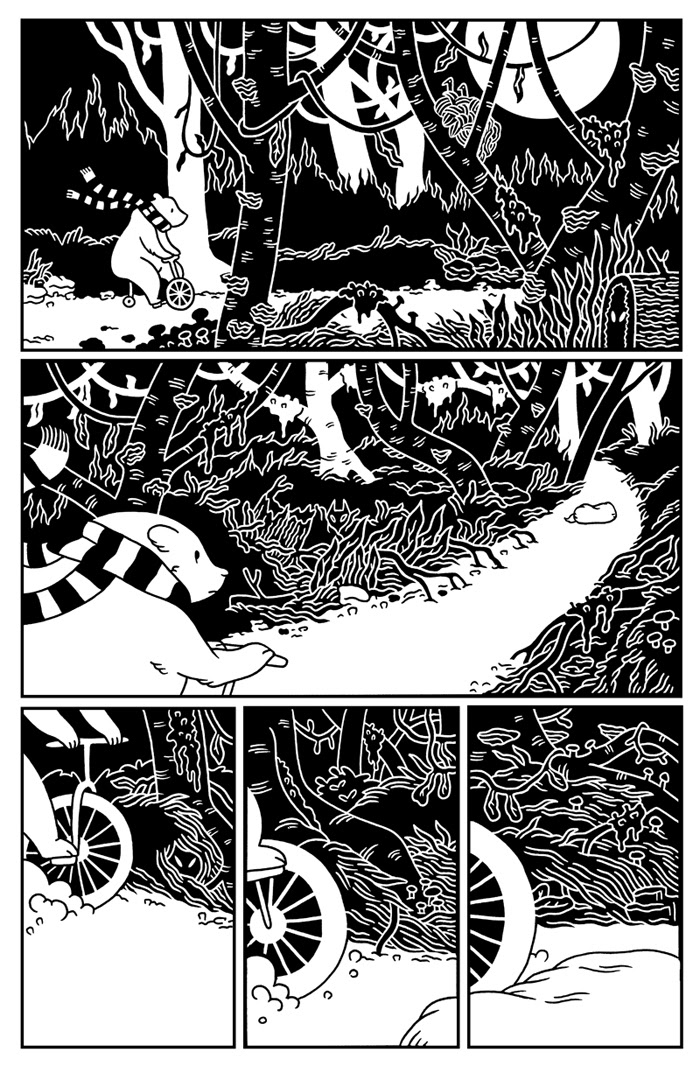 Sophie Goldstein: I first came to Sophie Goldstein's work via her Betsy and Mothership Blues comics- sci-fi tales with disturbing, ponderous elements- often with a focus on issues relating to women- in Betsy wombs are become a commodity, removed and used to breed the perfect space explorer. Goldstein's work has continued to evolved; in 2013, her superb comic, The Good Wife, showed a shift in style and a leap in artistic development, and was subsequently included in the Best American Comics 2013. Her web-comics, co-created with Jenn Jordan, Darwin Carmichael is going to Hell, has been updating weekly since 2012, and recently ran a successful kickstarter.

Hanna K: You may know of Swedish artist Hannah K via Bryan Lee O'Malley- she won that Scott Pilgrim drawing competition he ran a while back, and its easy to see why: her style has that cartoony, anime lilt to it, offset with delicate fine lines, which help lift it above the crowd. It's beautiful -particularly when its focused in illustrative spreads- and the combination of it lends itself well to both lighter fare, as well as being able to take on greater emotional resonance when needed. She produced a comic called New Frontier publishing outfit Peow! Studio last year which sold out very quickly, and is working with them again currently.

Julia Wertz: Julia Wertz is, I've found, somewhat of a Marmite figure for many people- her searing and apparently absolute honesty depicted in her auto-biographical comics, is ironically viewed with either suspicion or distaste, but I admire the balls she has- more so because that honesty is most often directed at herself, although not in a self-absorbed way. She's one of the few auto-bio cartoonists who I actually find interesting, as opposed to those who find themselves interesting. Her comics discussing her alcoholism, and her battle with  Lupus disease in The Infinite Wait, are some of the genre's finest contributions. Oh, and she's bloody funny, too.

Buy now: The Infinite Wait and other stories 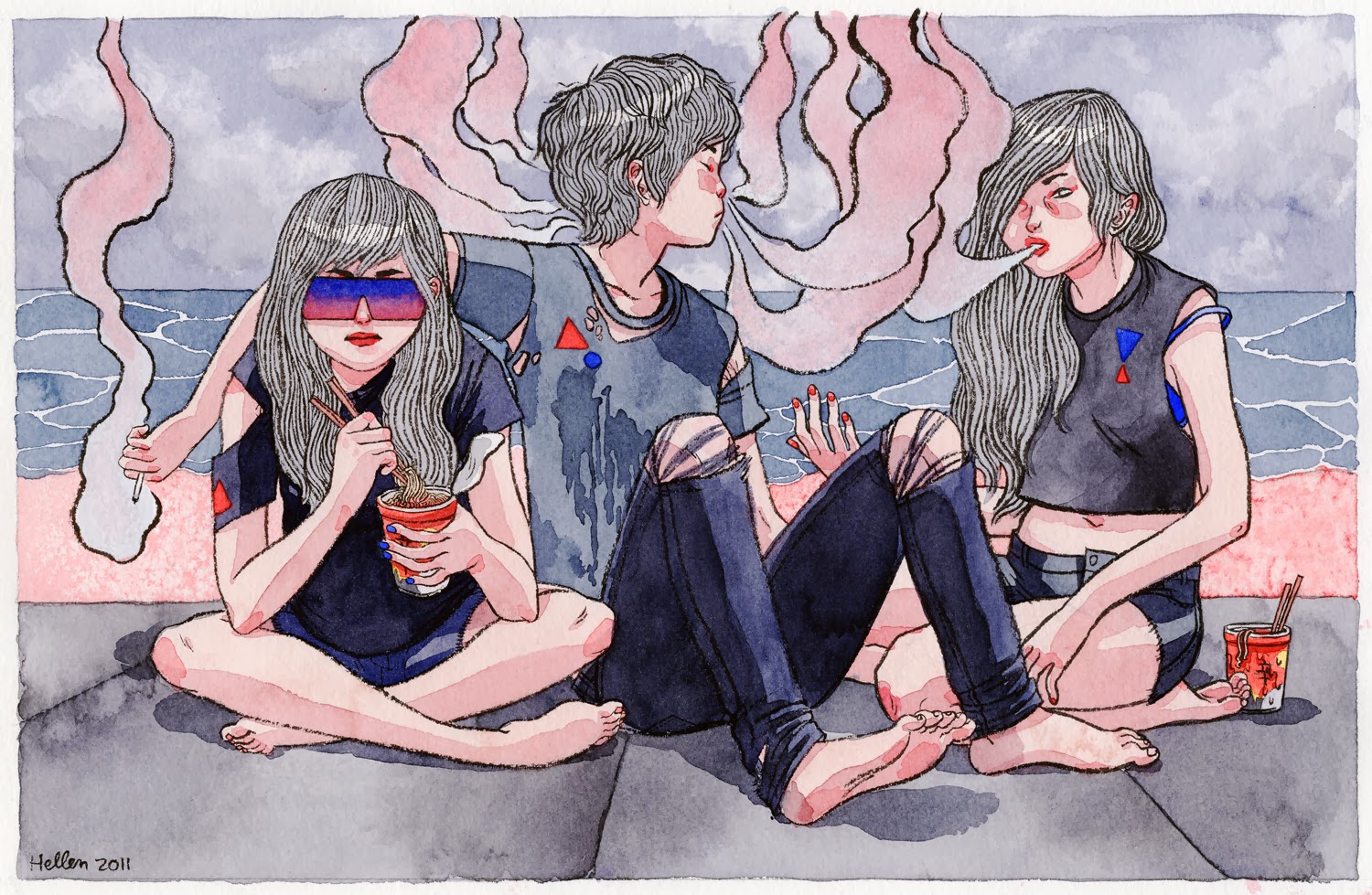 Hellen Jo: Jo's contributions to comics seem to have been mainly in the US underground and indie scene, or self-published and long out of print, but what she has done is heads and fucking knees above other's, and lets not pretend if she chose to spend more time on the medium (she works at Cartoon Network story-boarding etc), she'd probably be ruling it by now. Her paintings of fierce, bad-ass beautiful girls are the epitome of cool, and last year, Youth in Decline published a gorgeous, glossy monograph of her work, which you should really get your hands on. Her comic Jin and Jan, published with Sparkplug Books in 2008, features more trouble-making teens and is a thing to pore over. She's currently working on Jin and Jam 2 as well as a watercolour comic for Koyama Press. 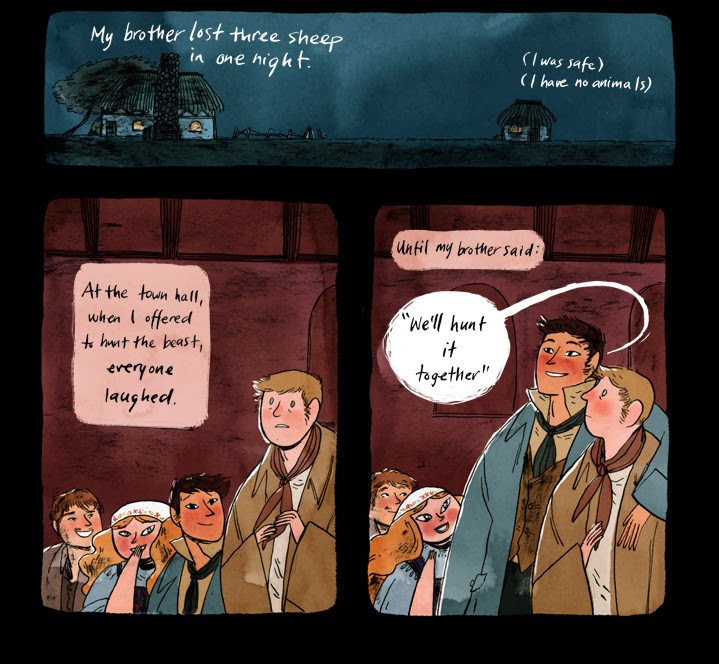 Emily Carroll: I often feel a little daft talking about artists like Emily Carroll, who has a huge following and is so good, that surely everyone must know her and her work. But there's so much good comics available nowadays, that you just never know what might have slipped under the radar, and I wouldn't like to risk leaving her off. Carroll is one of comics internet's success stories, creating genuinely creepy and unsettling horror comics, bringing together strong narratives with her uniquley evocative images, often with interactive elements. Her first, hugely anticipated print collection, Through the Woods, is due this July. Put it on your list.

Read now: His Face All Red and Out of Skin 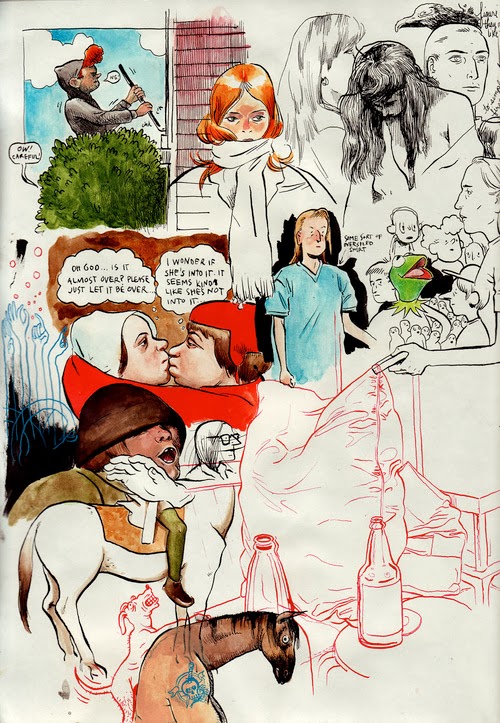 Sophie Franz: I had the hardest time choosing one image that would depict the extent of Franz's talent. I scrolled through her tumblr, up and down, up and down, agonising over, and admiring the images. She is the cartoonist, along with Joseph Lambert, who excites me the most, in terms of what they can, and no doubt will, achieve. Her ability is astonishing, and innate; there is something European about the way she draws- the women, the expressiveness, the noses! I am desperate to see more comics from her, anywhere, anyhow, although I'm not aware of anything she has published at the moment. Spend 15 minutes going through her tumblr- you won't regret a second.

Read now: This and this

Julia Gfrorer: Perennial favourite, consistently amazing, Gfrorer's continuing discussion with all that is dark and disgusting about humans, always gets me thinking about my own motivations, examining my own reactions in a manner that few others do. I love and appreciate that she writes about sex and emotions in a manner that's simultaneously validating and straightforward. She can go from that to using the associations of myth and lore to further explore those fascinations; her fine, gothic-tilted art suits her subject matters perfectly: fragile, romantic, human, creepy and attractive. 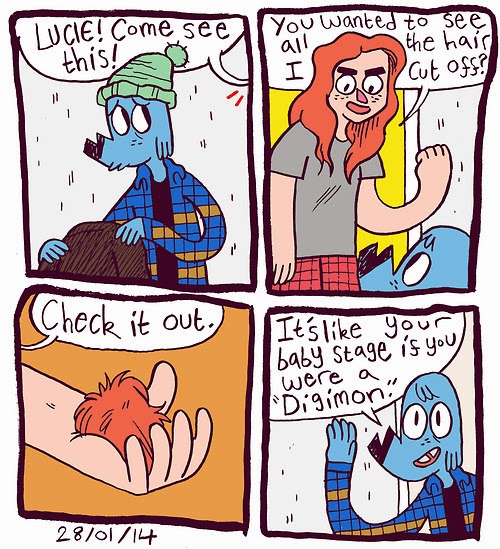 Lucie Ebrey: Ebrey is currently an illustration student at Falmouth University, and first came to my attention via Tumblr, where she's been posting her 4 panel diary comics. Ebrey's pretty prolific with these, producing many in a week, which are reminiscent (like many a diary comic) of James Kochalka, and there's an easy, sketchy naturalism to her style and tone. But she's capable of diversifying, and pushing herself, as her impressive work in the Pic'n' Mixtape anthology  and other university art projects show. Definitely one to keep your eye on. 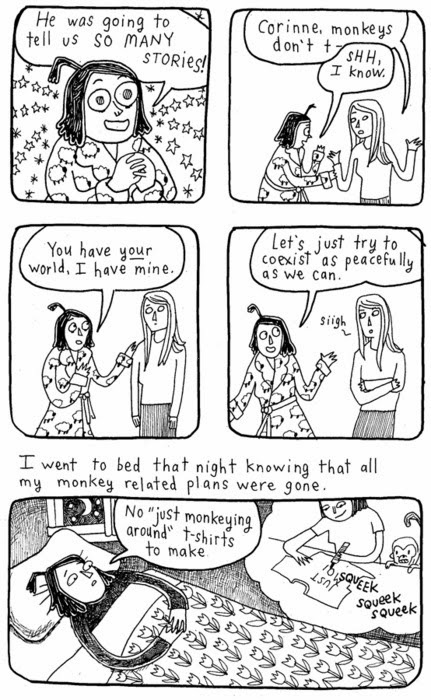 Corinne Mucha: If you read this blog, you'll know I'm a longtime admirer of Corinne Mucha's work. At her best, Mucha does what every cartoonists aspires to do: amalgamates accessibility with emotion, depth and intelligent writing. She won an Ignatz for The Monkey in the Basement and Other Delusions, and also wrote a graphic novel for kids: Freshman Tales of 9th Grade Obsession and other Nonsense. I was thrilled when Secret Acres announced they'd be publishing her first book-length comic, Get Over It, later this year. Mucha is able to talk about the societal expectations of women, their image and relationships unlike anybody else: un-preachy, smart, insightful and super on-point.