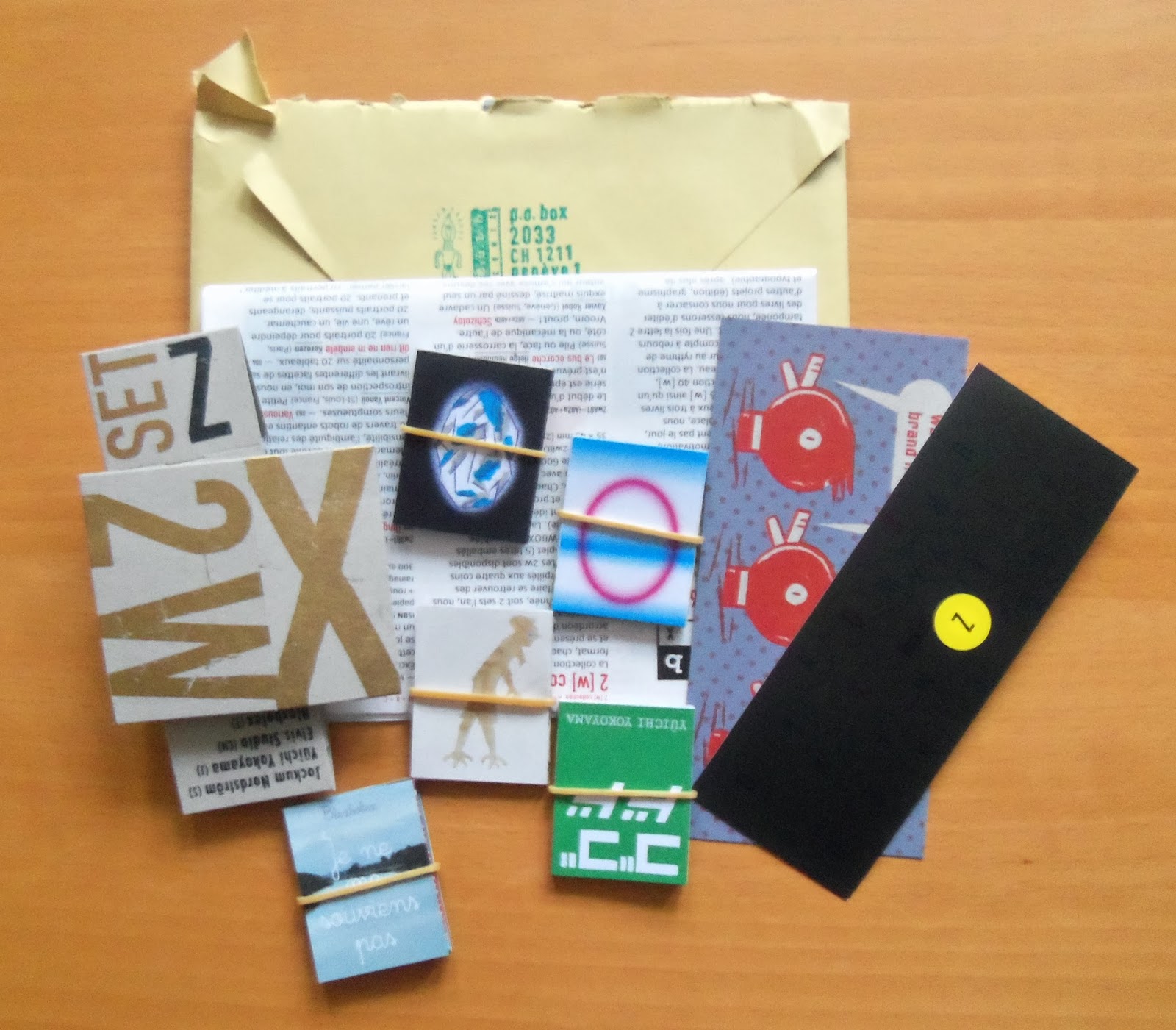 The folks at B.ü.L.b Comix sent me this intriguing little package a while back: 5 mini books, rubber-banded, 2 cardboard box nets, and a couple of sweet bookmarks. Chris Ware made a big impact with his boxed comics ephemera, Building Stories in 2013, but B.ü.L.b Comix have been producing comics with a focus on form and interactivity since 1996 (and Ware has, in fact, produced a comic for the outfit, along with artists such as Charles Burns and Tom Gauld). A non-profit organisation founded by Nicolas Robel and Heidi Roethlin, later joined by Mathieu Christe, they have a passion and focus is centered around the DIY ethos of self-published and small press comics, with an aim to replicate some of the visceral physicality of that experience, to offer a tactile-ness that doesn't extend to digital comics (there's some fantastic photographs of how the comics are printed and produced here- giant sheets of cardboard which are then cut up) . What B.ü.L.b tries to do is cultivate and present that DIY experience for the readers too: the assemby of the box, choosing which order to read the comics in, viewing the concertinas tiny page by page or as a panorama- an emphasis on form.

B.ü.L.b have been producing these boxed comic 'sets' in limited editions of 500, labelled after the letters of the alphabet combined with actual bulb wattage's. This, then, is Set Z (the 26th) in the 2W series, bringing together a group of international artists from France Sweden, Japan, Transnistria and Switzerland to create concertinaed sequential art books. I put the box together first- it's a really nice, sturdy thing with crinkled gold matt font- the mini pull-out drawer effect reminded me how I used to use matchboxes as storage for bits and bobs as a kid- sticking several together with sellotape to make a chest of drawers- using split pins as little knobs. 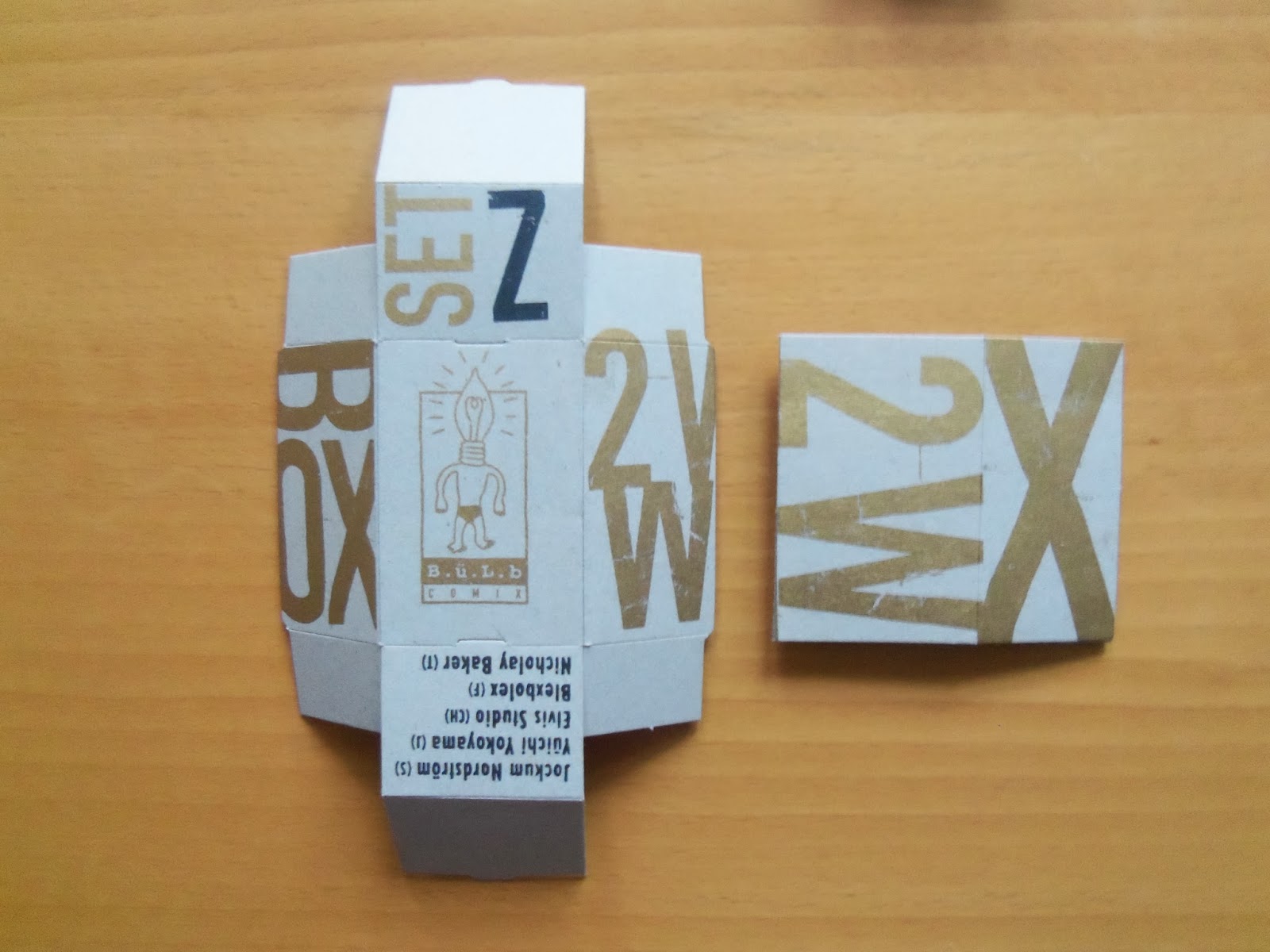 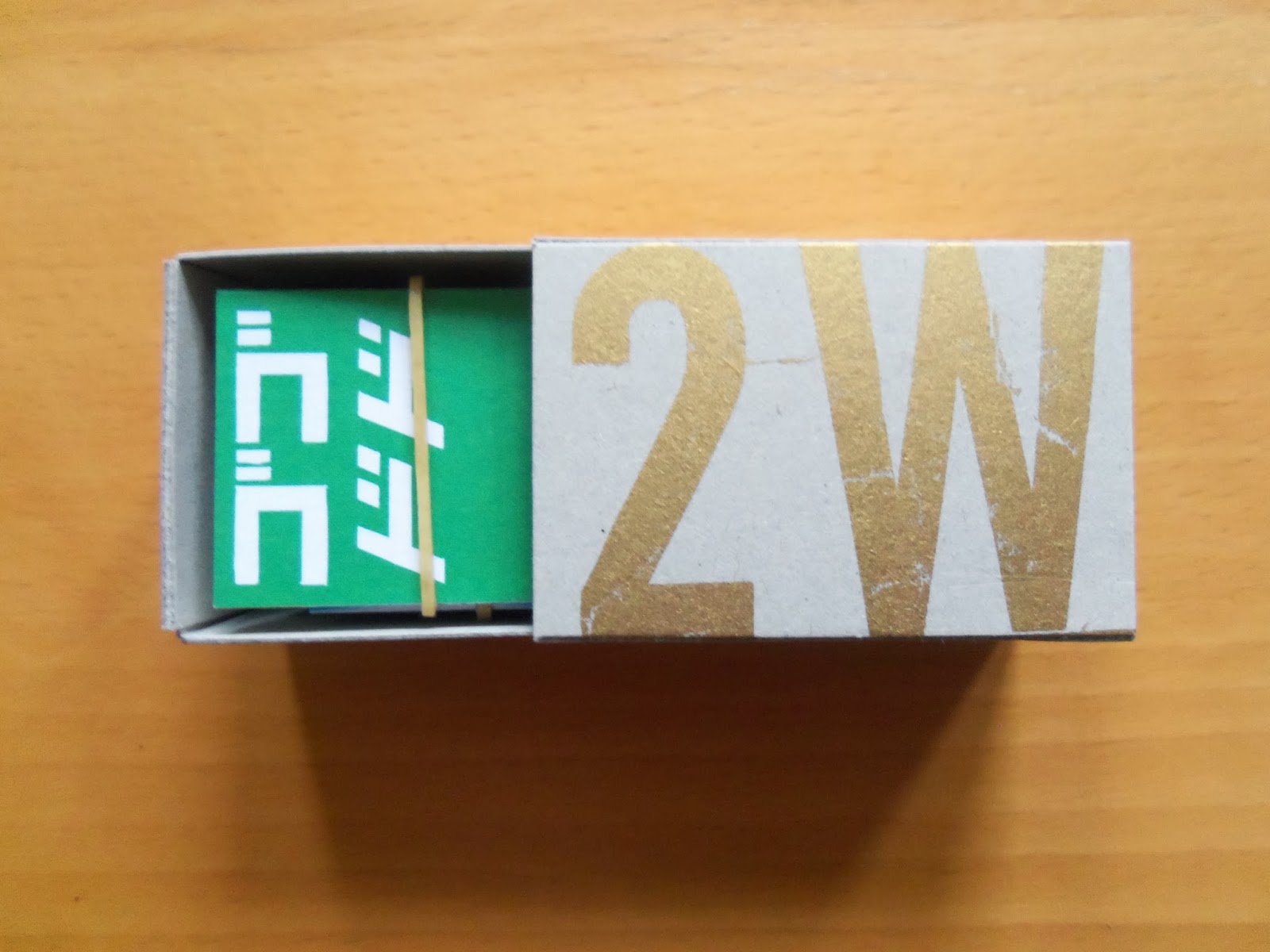 Here's a closer look at each of the books:


Untitled by Jockum Nordström: Nordström's book is a procession of textured animals and human beings, trees and rough wood-hewn objects: there's a Noah's ark vibe as beast and man interact with nature and one another, coupled with an innocent romanticism, a new freshness, which is further emphasised by the pale watercolours and the cut silhouettes. I like how looking at the panels singularly gives a 'one-by-one' presentation, and the pulling wide the full procession.

Kunsttempel by Elvis Studio: Kunsttempel is probably the most fully realised vision here, a mashed smorgasbord of surreal and sic-fi imagery: packing in planets, strangely grinning man grouped together looking at the reader as if commemorating an event with a photograph, impossibly geometric building structures, ice, wood, melting vibrating beings, translucent beasts, with the waves of neon yellow pulsating all the way through, exacerbating the almost hallucogenic atmosphere. The penciled drawings are minutely detailed, the scrutiny of which reveals more each time you look at them.

Je ne me souviens pas by 'Blexbolex' Bernard Granger: This was a bit of a surprise- Blexbolex experimenting and giving us a photographic sequence of images, beautifully edited to sharpen and saturate the colour and contrast. The holiday, tourist-esqe snaps of spires and turrets, food and plants, graffitied buildings, are at odds with the title 'I do not recall'- people take such pictures a way to preserve their memories- meaningful only to the taker. At once personal, they're also universally impersonal- familiar in type to all.

Shades of Shards by Nicholay Baker: Baker's strip purports to work as a zoetrope when the ends are stuck together and placed on a turntable, but I don't have a turntable so that rules that reading out. One side features a rock exploding into pieces, rays of light beaming from it, the energy force within eventually freed and star-like in appearance. The other, I presume, is intended for the zoetrope effect, a blue circle shot through with red lines, giving a negative cell look. I liked the crystal breaking up and the geometry of the rays.

Go go do do to by Yūichi Yokoyama: Yokoyama's book was easily my favourite- stylish, streamlined, the colouring- that bright yellow pop, the dots, the textured, the Japanese font. It's sort of pop graphic and very appealing: looks like a bunch of people either working or dancing- the guy in front has a music player of some type, but the row formation seems a little formal. I like how the bold zig-zag and polka-dots on the clothing punctuates the image. The flip-side is a sparkling spread of rice? rain? -the fruits of the labour.

For me, the best thing about the B.ü.L.b set is its aesthetic quality, design and its experimentation with form and content. It's a nice physical object as well as a genuine attempt to offer something new in terms of comics, and that's to be applauded.