Comics Carousel: art it up

Reviews! Or something approaching them... As ever, click on pictures to enbiggen, and click on bolded titles to lead you to places where you can buy said publications. Breaking this up this week- 2 more on Friday. 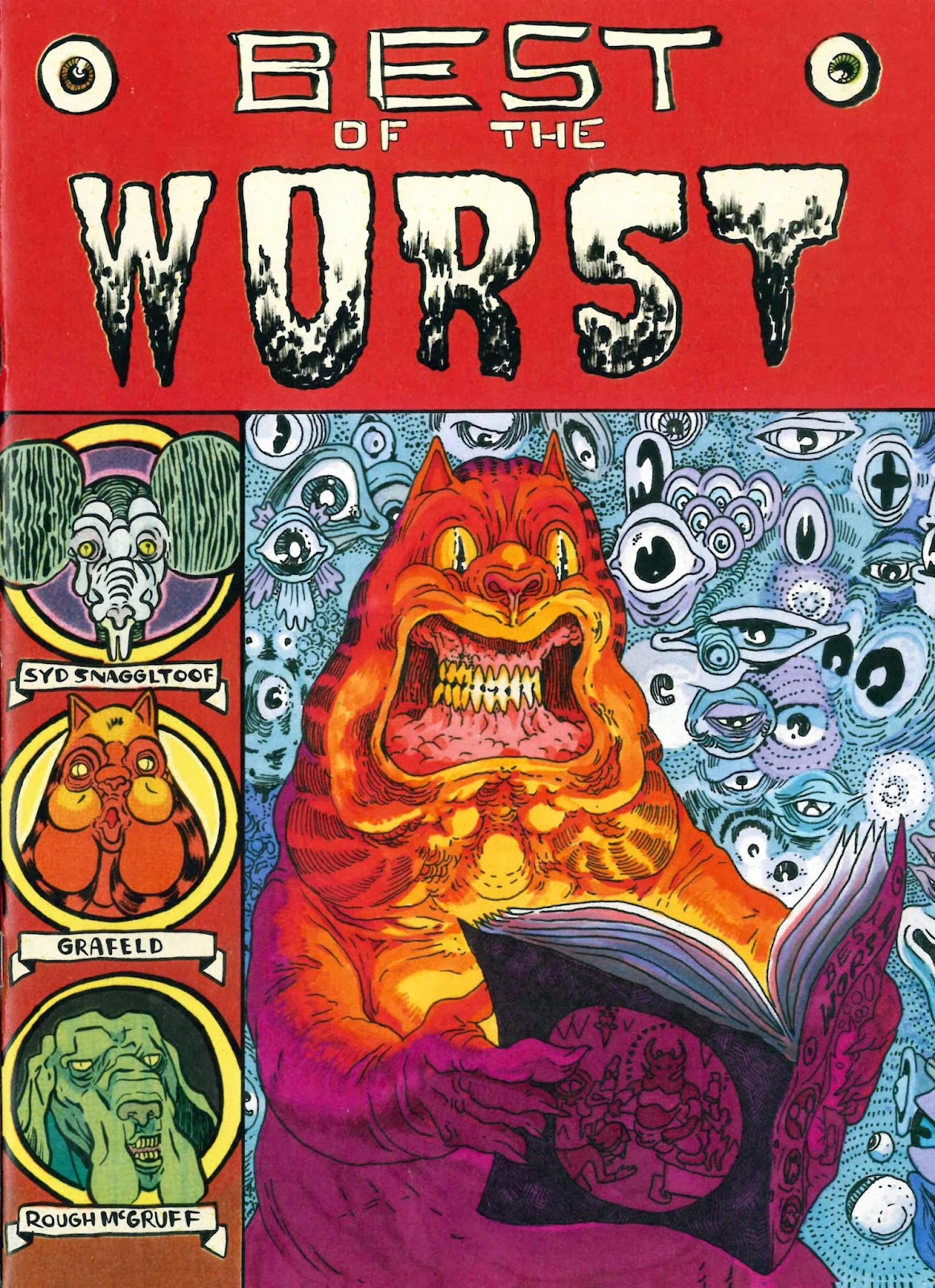 Best of the Worst by Josh Burggraf: I'd never come across Burggraf's work prior to buying this- not even online and that's surprising, because he's super talented- in fact, take a quick minute and check out his tumblr. Every now and then I come across someone's work who I almost instantly become enamoured with, checking out anything they've done and keeping an eye out for future projects- this collection of Burggraf's work had that effect. Burggraf edits the Future Shock comics anthologies and has a series called Kid Space Heater amongst other things, but this is a nicely put together showcase of his abilities.

'There's a lot of sex organs in underground comics,' muses Burggraf in his introduction (I really like the introductions he gives here, a sort o fintricately bordered ex-libris bookplate page with the text in the middle) to the opening comic, Syd Snaggletooth and the Sex Worms, a parody of those often poor Crumb-style comics in which droopy eyed, leery characters partake in lurid sexual acts in phallic, membrous environments in a manner that can only be described as boring, and to no purpose: perverse for the sake of being perverse with no other function.. They're supposed to be funny, I think, and the author extolled for his outrageous daring. Burggraf nicely takes the piss out of those with a rabid Mickey Mouse character acting as the chose one in a land of sex worms. I've been trying to determine what the difference is between those sort of comics being good or bad, and one of the aspects is tone- here it's an obvious ribbing, but without malice, and a lack of pretension.

The other 3 sections comprise a bunch of Nancy and Garfield strips, an anthropomorphic McGruff comic, and a meta roundtable, where a gathering of Burggraf's characters debate their popularity and the decision as to who should be the focus of his next comic. The Nancy and Garfield comics are basically an exercise where you take two original panels- one as starting point, one as an end, and then draw your own comic in between. These are pretty superb fun- you can see the energy and good time right there on the page and it passes through to the reader- that first felt-tipped, madcap Jon and Garfield is great, but they're all just incredibly entertaining and so good to look at.

McGruff is another pastiche of McGruff the crime dog, a bloodhound cartoon character created by Saatchi & Saatchi to help the American police in building crime awareness among children. Burggraf's version is an older, slightly sad, drunk version- and man, the cartooning and colouring here is exquisite. The lines are crisper and cleaner, the industrial warehouse setting providing the opportunity for some lovely moody green backgrounds. I love the page I've posted below right (click on it to see it larger) the jowly movement of McGruff, the dynamism of that first panel, the orange and yellow cranes popping against the emerald- so, so  impressive. So yes, Burggraf's immensely capable at this comics lark: he can mix that weird, slightly gross, out-there material with a genuine, accessible humour, softening the edges, and making even the uglier aesthetics, pleasing and attractive. 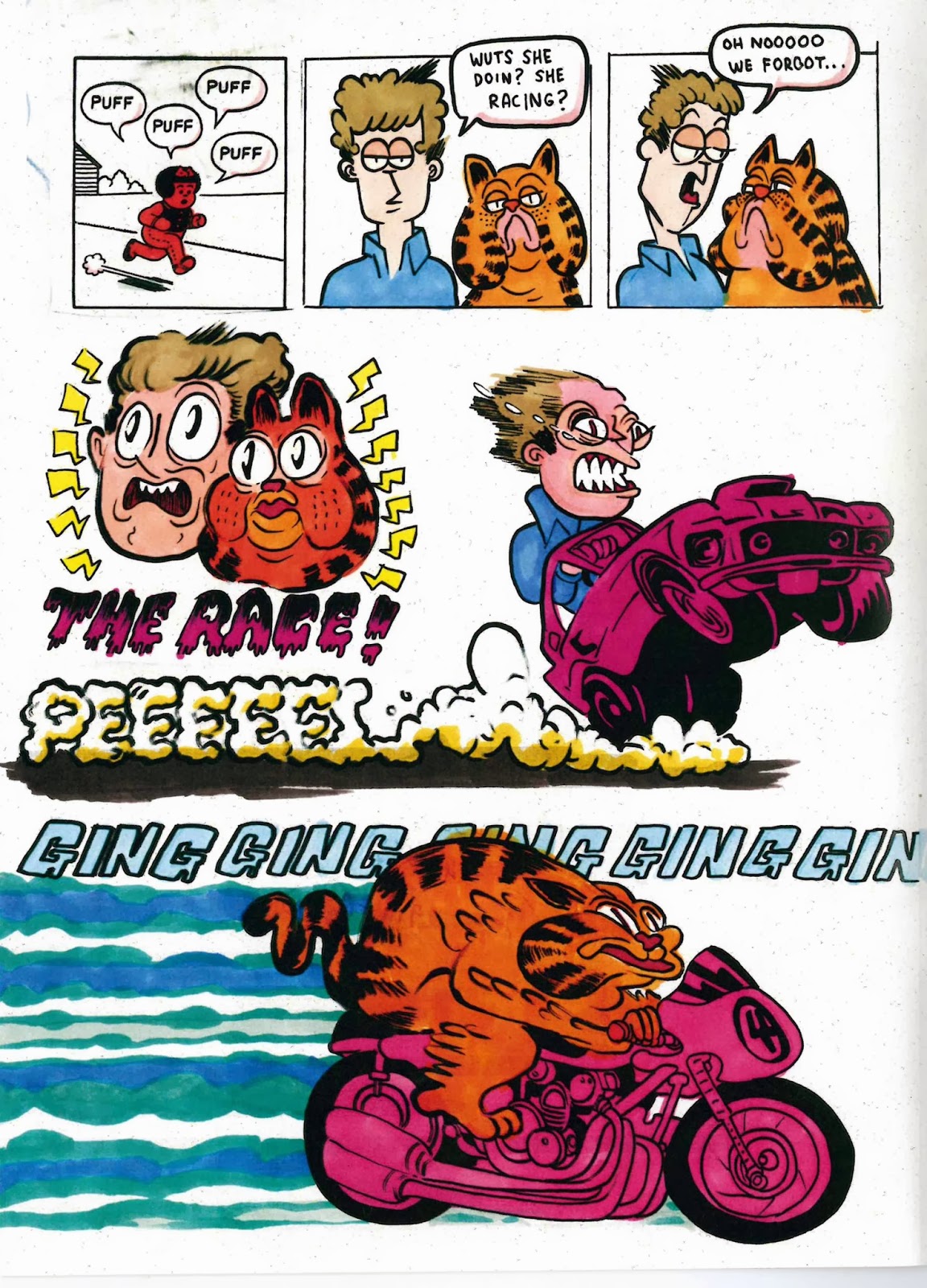 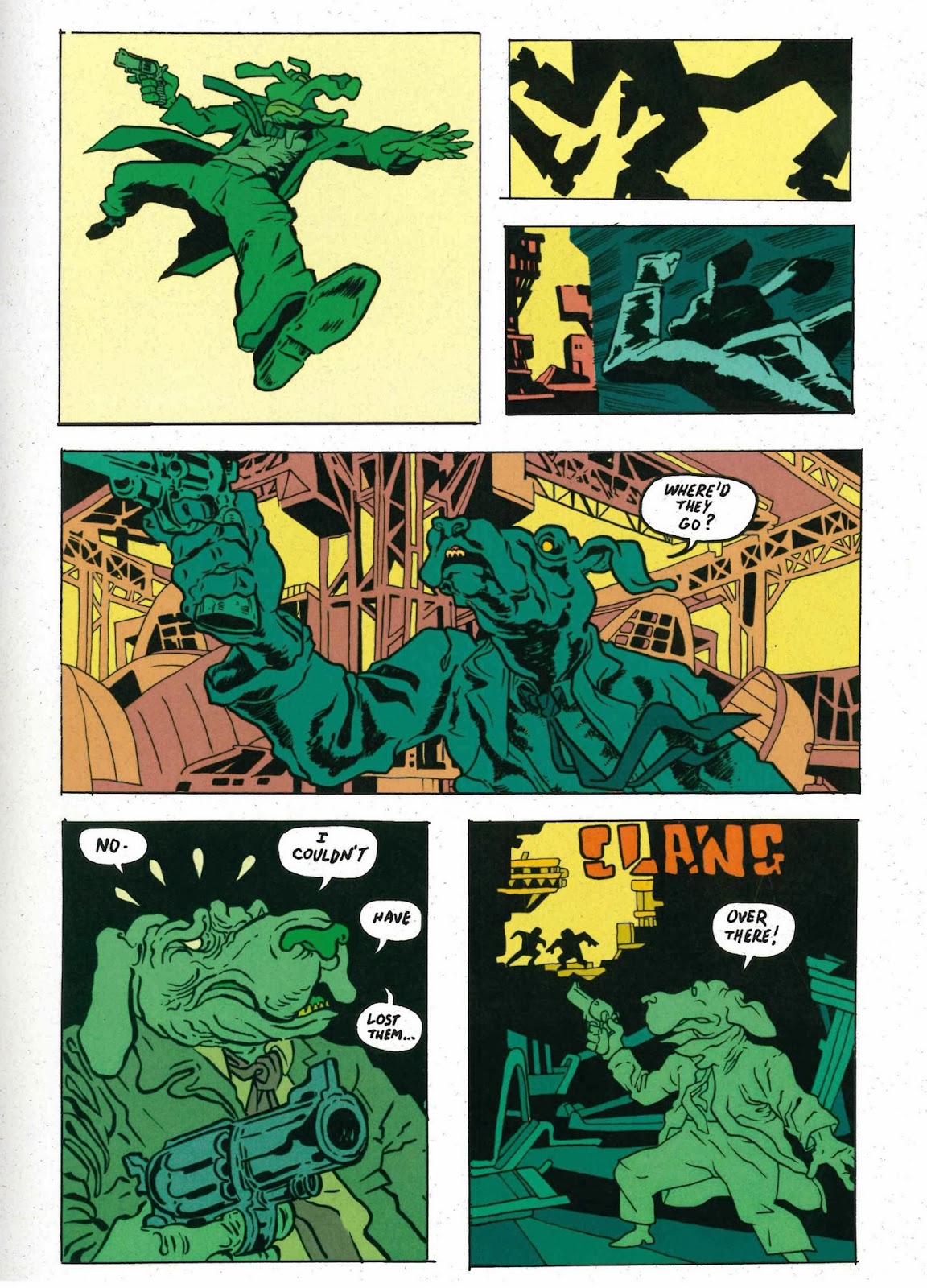 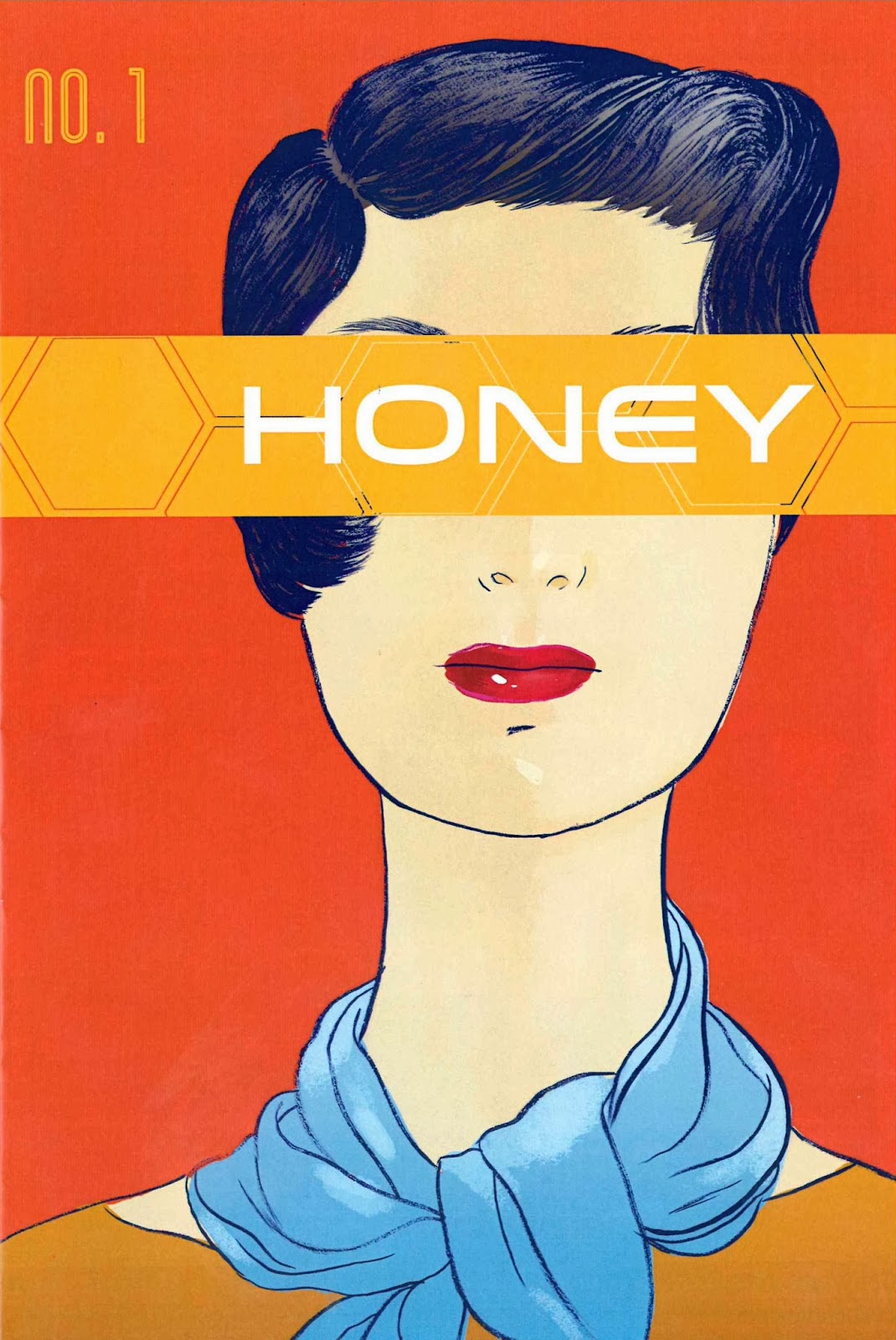 Honey by Celine Loup: Honey is Celine Loup's debut comic book, a lyrical, beautifully realised vision in which she makes the interesting choice to render the insect world in human form. Bees, wasps, dragonflies, all largely female, mini humans, and yet obviously not as they all go about undertaking their respective insectoid tasks and roles. Loup bathes the whole thing in sunlight and air, perfectly conveying that hazy summer feeling.

The focus of the tale is on the nectar gathering bees and their practices: they have a life expectancy of 3-4 months, and old bees are quickly gotten rid off once they're no longer able to work. Bea and Delia are a couple who go out in search of nectar and are be ambushed by a eerily pale dragonfly, who they manage to fend off, only to be attacked by a wasp who takes away their friend. The sequence in which the wasp takes back an unconscious Edith to her nest, is genuinely creepy and disturbing. The panels cut between the wasp and the bees, now back at the hive and discussing a course of action, so you get a panel with the wasp holding a pair of nasty, large scissors, then a sinister 'snip snip' as she cuts off her clothes and finally your'e shown the wasp eating a chunk of meat.

The page on the right below is the first piece of work I ever saw by Loup, and the one that pulled me into  purchasing Honey. The orange wave emanating from Bea is the smell of her nectar after being cut, and Loups deepened the colour to an ominous, dangerous tone as the wasps stand menacingly. I mentioned   character design earlier, and I know I'm not meant to root for the wasps, but they're so bad-ass looking: ninja-esqe in their huge black visors, motorbike influenced, grooved suits, where the bees are more romatically dressed  in stripy, nautical retro bathing suits.

Honey's strength lies in Loup's elegant, graceful art, and delicate lines, the inventive creativity of it and the world she's created. It's a truly sublime-looking comic- I mean those trees in that stretch panel in the page  on the left below are gorgeous- and there's lots of that, variety in the backgrounds- an aerial view here, moving blue skies and clouds as the wasp ascend further upwards. Having said that, it's all over very quickly, and the early, promising ideas where Bea and Delia argue over the treatment of the bees not really expanded on. It's a world I'd love to see explored further and in greater detail. 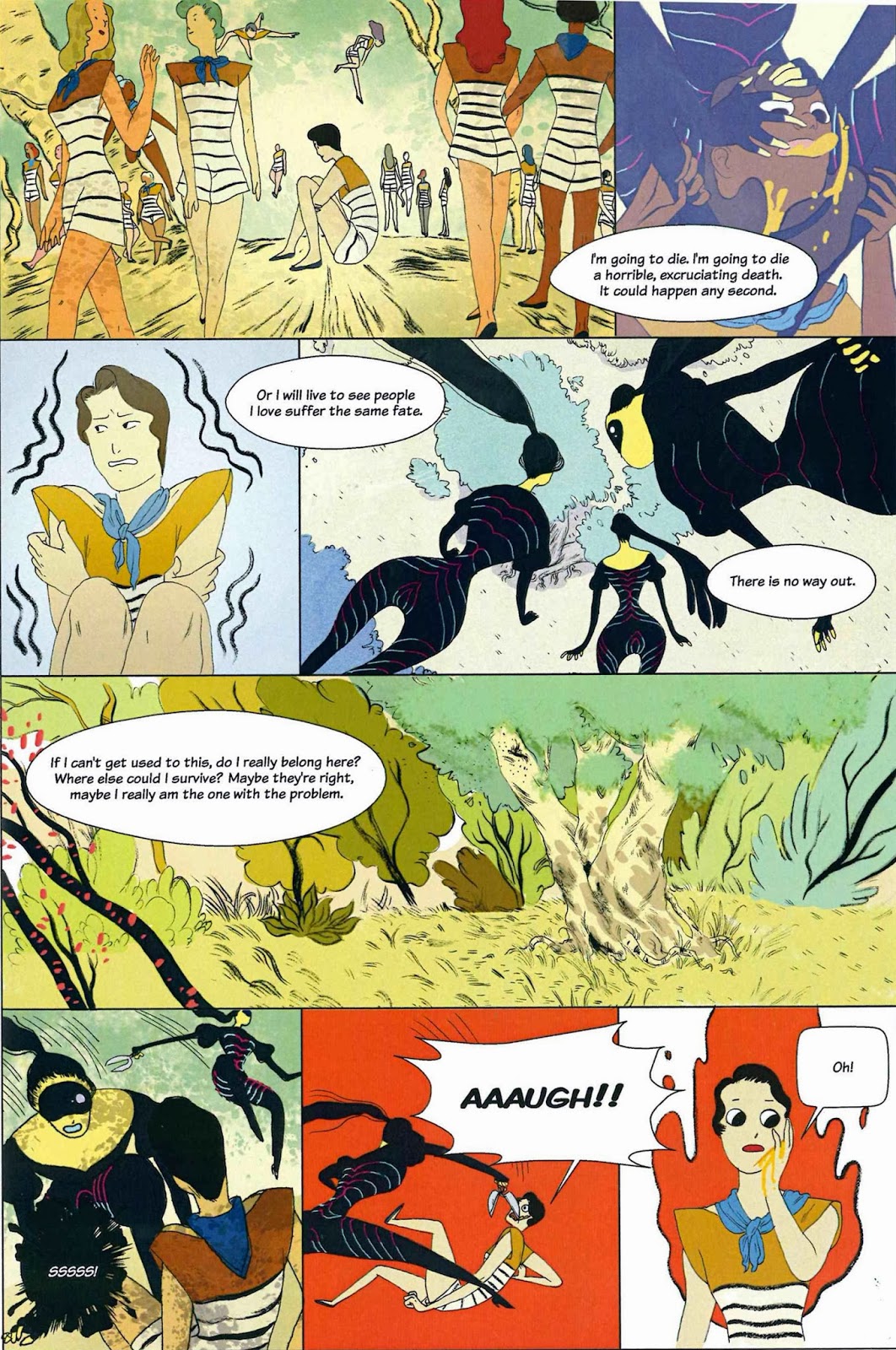 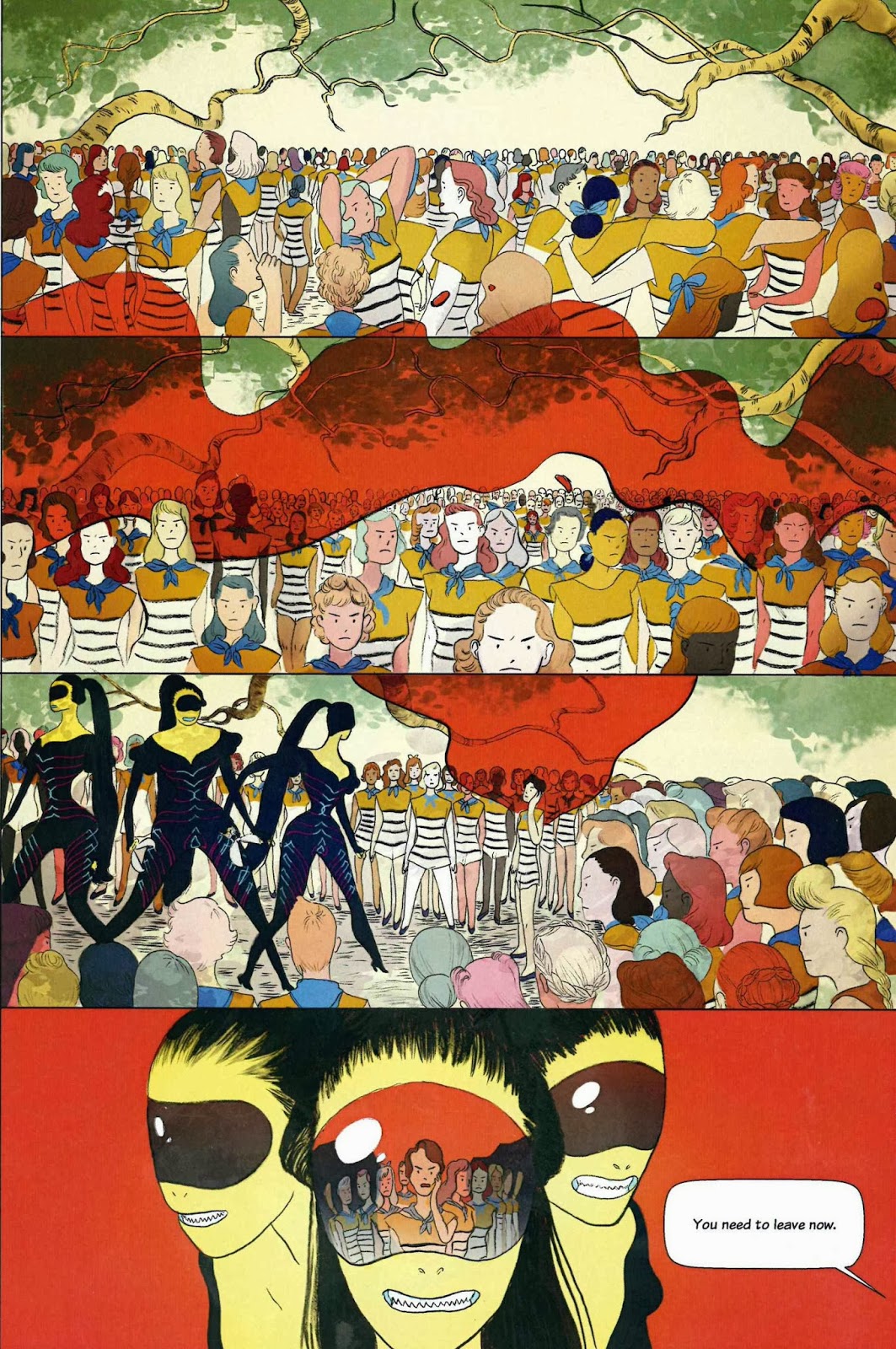