News from a while back -last August in fact, when I was mired in my Masters and rather less focused on everything comics. Locust Moon, a comics store in West Philadelphia, who have also moved into publishing (most notably with the Once Upon A Time Machine anthology) announced a huge project- both in scope and in news worthiness/excitement. This autumn will see them publish Little Nemo: Dream Another Dream, a tribute book dedicated to the creator of the Nemo newspaper strips, Windsor McCay. The project will see a dizzying range of comics creators author Nemo by creating their own interpretations of the strip- and when I say dizzying range, how about Mike Allred, Paul Pope, Bill Sienkiewicz, Fábio Moon & Gabriel Bá, Neal Adams, Peter Bagge, Farel Dalrymple, Brandon Graham- seriously, just check out the litany of those involved below. Locust Moon are aiming to publish the finished product as both a newspaper and a hardcover book at the original, full size format of the Little Nemo broadsheet pages (16″ x 21″), and it's really cool to see people take on something of this magnitude- and something that's a perfect canvas/showcase for print.

McCay's Sunday strips, generally considered his masterpiece, featuring Little Nemo would see his young protagonist embarking on fantastical adventures each week, only to wake up in the final panel. The strip ran from  1905 to 1926, moving from The New York Herald to the New York American and back again. I've only just started reading Little Nemo (Oliver lent me this huge tome- that man is a gem- and way too trusting) but it's one of the most brilliant comics I've clapped eyes on. I mean, here's one of my favourite pages, which leaves me a open-mouthed: the tall panels and the perspective as the elephant gets closer and closer, and the sheer artistry on display blows me away: 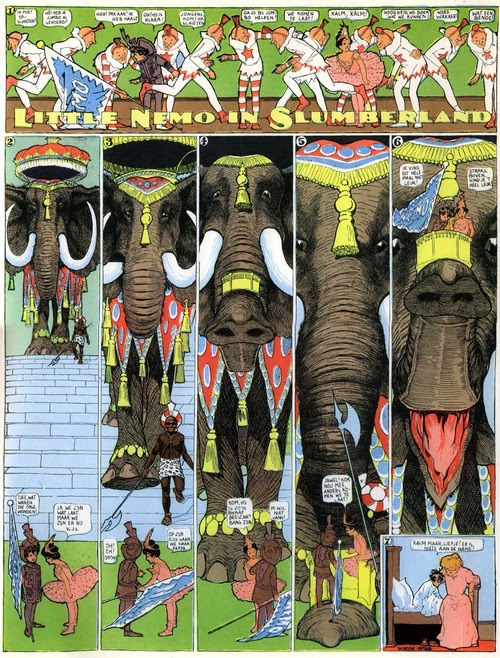 I can see myself having to write a few long pieces to get the buzz out of my system; it's a real shame more of the comics aren't in print, although pricier copies and editions are floating around.  Anyway, here's the list of people doing strips for the book so far (more being added still, I believe):

And here's a look at some of the pieces people have done so far:

More details over at Locust Moon.
Posted by Zainab at 00:04