Bastien Vives' Polina and the dance of life 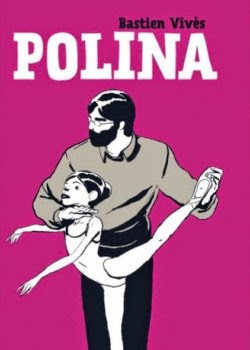 Polina is the second of French cartoonist Bastien Vives books to be give an English language release by British publishers Jonathan Cape, who were also responsible for bringing his  Le Goût du chlore (A Taste of Chlorine) to English reading audiences. While that book marked Vives' formal coming onto the scene, punctuated by his 'Essential Revelation' prize at the Angouleme Festival in 2009, Polina is a definite indication  of progression, of a further maturation of his talent. For those only ever exposed to these two of Vives' works, like myself, that progression is even more pronounced. Chlorine was a beautiful exercise in pacing and ambiance, and while the narrative was by no means poor, it was the art that made the impression- the innate ability and comprehension, rather than characters or story.

To an extent, the same could be said of Polina, with Vives using the simplicity of his tale to allow the illustrations to flourish, but ostensibly the beauty of the story lies in its cohesiveness as a comic, the organic manner in which it functions as a whole. Part of the appeal of Chlorine, I think, was its ephemeral ambiguity, almost, which was cognisant with what Vives was attempting to achieve there; it played to that subset of thought that believes in the greater merit of work with a degree of unknowability, viewing it as more challenging, and while rapid exposition is never an ideal, a work is not elevated simply by being sparse and inexplicable. Still, there are those who will no doubt consider Polina a lesser book due to its linear narrative, bildungsroman theme, and use of dance as a foil. That is not the case.

The plot is a coming-of-age, finding-your-own-path- a young girl is enrolled at ballet school, taken under the wing of a notoriously demanding tutor who sees her promise, and as she grows and graduates, struggles with the path and school of dance that is laid out before her. In a way, it's a very middle-class exploration of self -ballet is still considered an elite and expensive profession (?); where many thematically similar narratives deal with teens or 20-somethings attempting to retain a sense of self, or losing it, while being worn away as they eke out mindless jobs to survive, not being able to do what they truly love or have a passion for due to socio-economic factors, Polina is lucky enough to seemingly not worry about these things. She's found what she loves to do, but the practicalities of executing it in a  fulfilling manner eludes her. The universality here lies in the experience of growing up, of questioning what you've been taught, of figuring out what to do, your place in the world.

It's underpinned by Polina's relationship with Professor Bojinsky, a famously strict teacher who becomes an instrumental figure in her life- the voice in her head, and whose lessons about dance she learns to apply to other areas of her life. Apart from in the opening sequence where she drops her off, we never see Polina's mother, or even know if she has a father, or hear her speak of them; while she is not close to Bojinsky in a confidant or  emotional sense, his is a significant, totemic role; she certainly respects him and his knowledge, and listens to him, and in turn, he affords her the same. It's interesting, because there are long stretches where Bojinsky doesn't feature (and yet, as the only adult shown present in Polina's life from beginning to end, his presence is always felt), nor is the relationship always harmonious- Bojinsky wants Polina to star in a dance performance he's written, but it doesn't work out, and as she struggles to adapt to other schools, she uses his teachings as a defense and crutch, and ultimately a way out. 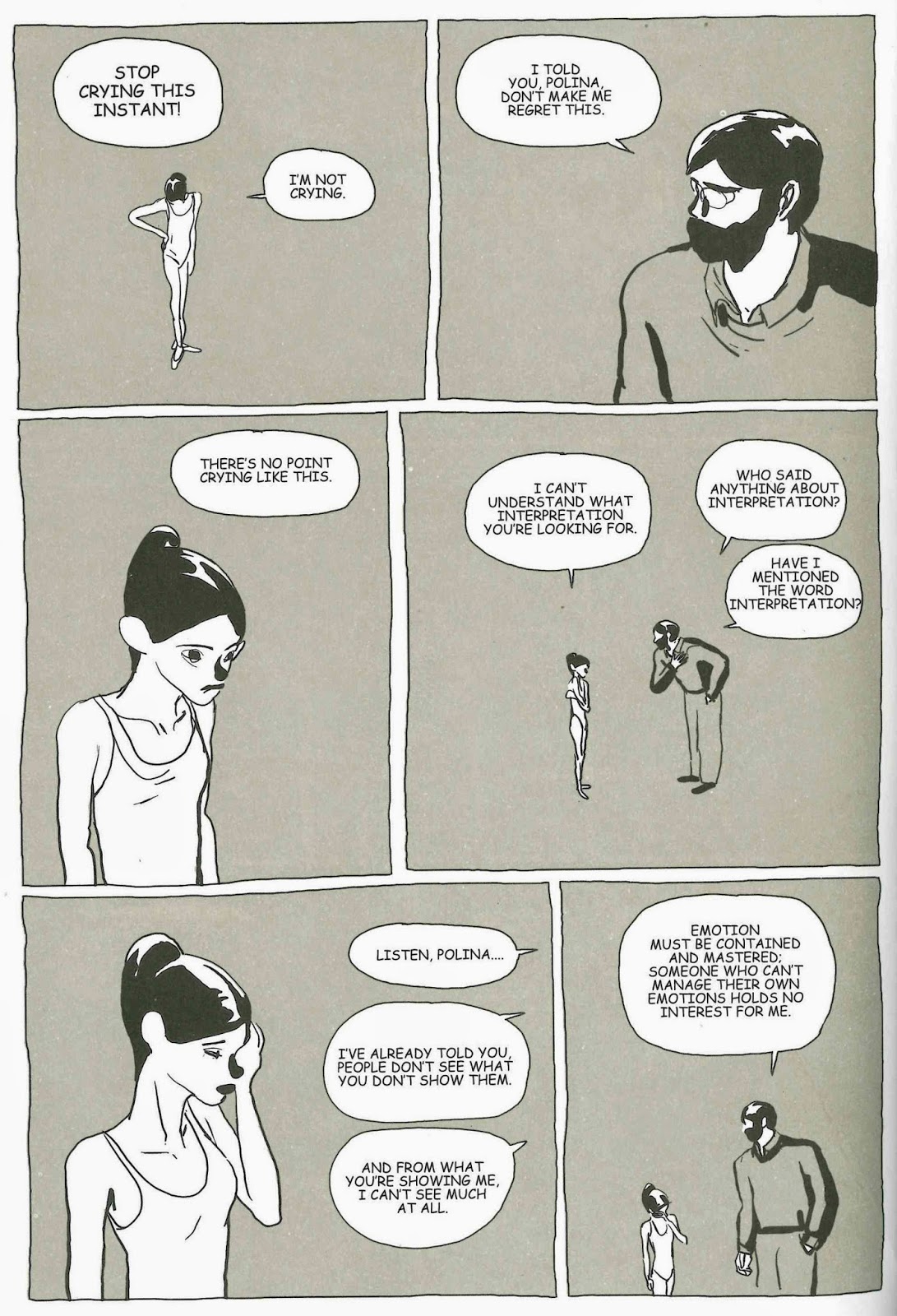 It's a very believable rendering of an interchange- there aren't any jarring, cute moments (until the third act, at least), but a mutual understanding that grows. As Polina becomes an adult, the relationship begins to change- she is less cowed, more appreciative; when she becomes famous, the dynamic and power comes full circle. There is a wonderful, glorious trick Vives employs all through the book, and simple in execution:  Bojinsky wears glasses and they present a barrier of sorts, we are unable to see his eyes, and they take up a good portion of his face- devoiding him of any expression, and adding to that strict, po-faced characterisation. It's clever, too, because it serves to neutralise and remove the 'male gaze', Vives draws the glasses blank- so he can't 'see,' keeping him at a distance, professional, in an environment where he is in a position of power and working closely with young girls. The instant he removes them in the third act, he is humanised, but only when Polina is older and there is more of an equal standing between the two. 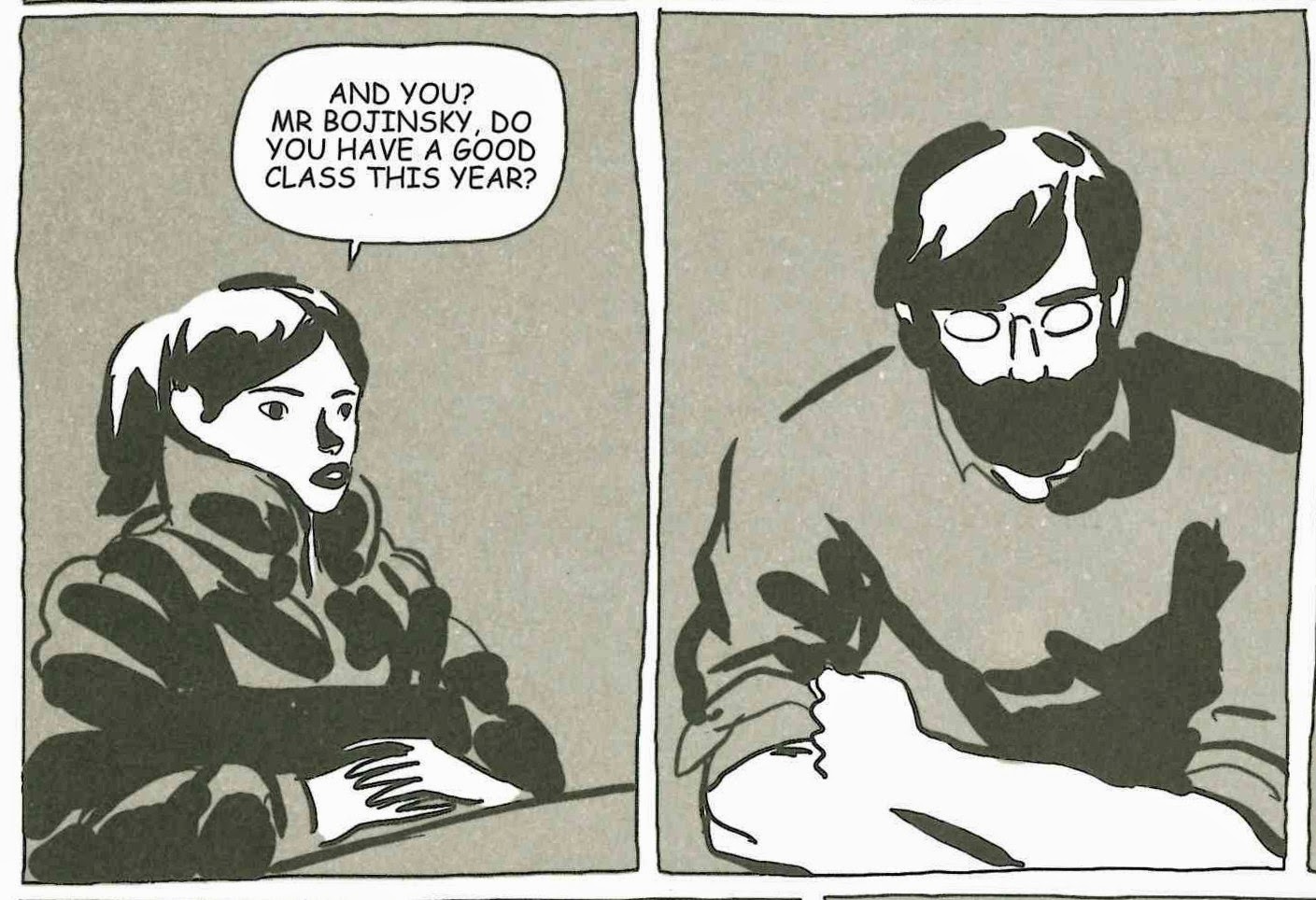 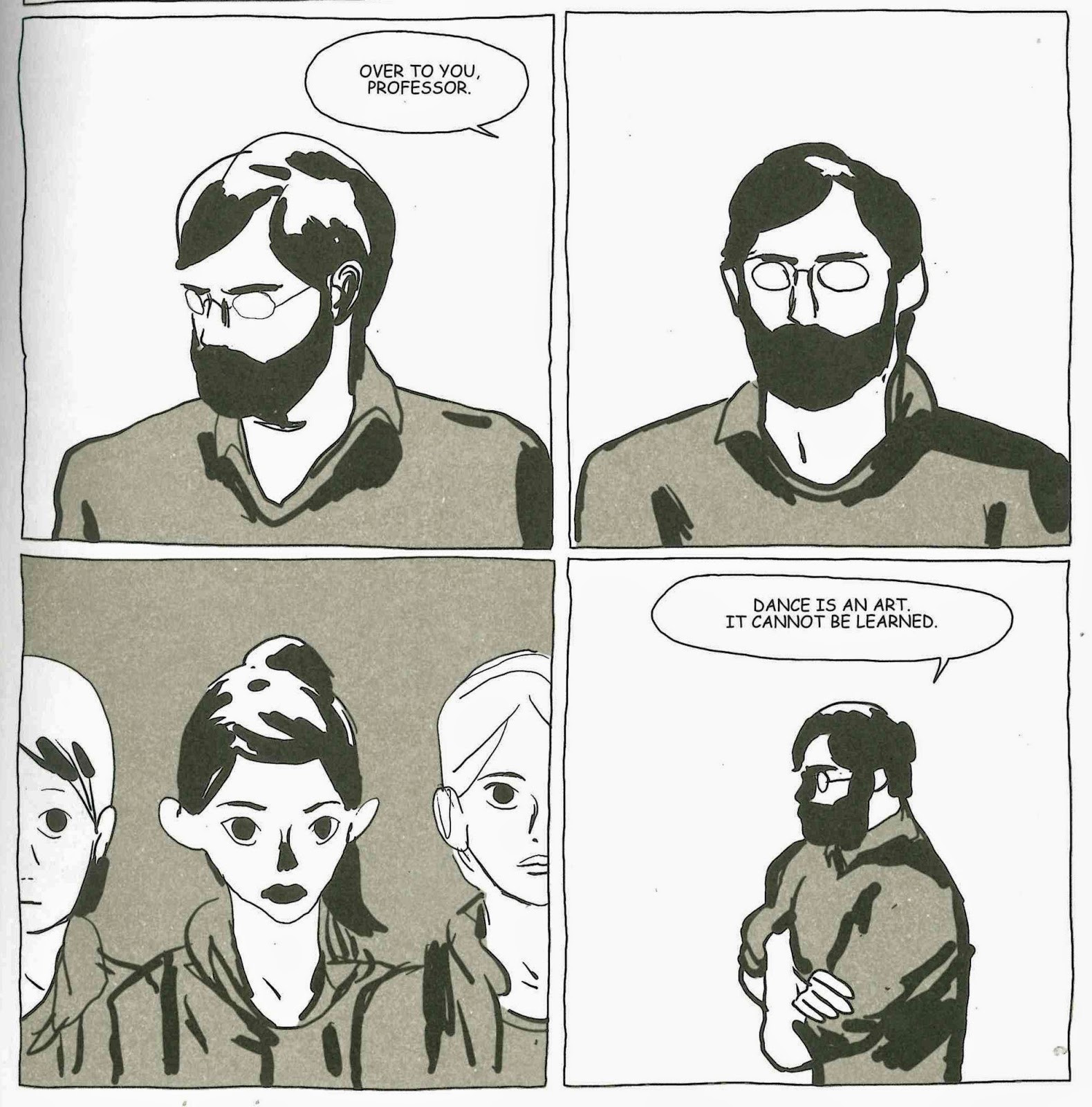 Ever present is Vives love of drawing the human figure- in Chlorine, it was people at the swimming pool stretching, moving, distorted and separated by water, and now it is ballet that serves him- as people prance and leap and pirouette. I read somewhere once that you can see in Christophe Blain's art that he loves drawing- that joy that comes across in the quick expressiveness of his style, and I would say the same of Vives when is drawing people- particularly dense crowd scenes- packing them in nightclubs, or at dance rehearsals- just people upon people, letting the ink flow. It looks so loose and unfettered, so without artifice and it is a pleasure to take in. Another technique he employs is a studied repetition to establish rhythm and tone- same location, same people, same routine, and then breaks away from that to effect. Here, he leaves vast space all around her when she's a child, emphasising her uncertainty and place, as she grows into her late teens, the backgrounds come into being, busier, intricate buildings with swathes of people, excursions to the countryside and cities, to cafes and dance halls, as she sees more of the world it becomes more for her, almost as she's willing it into being. When she dances, everything melts away, and the background is either white or black; there is nothing- only Polina. 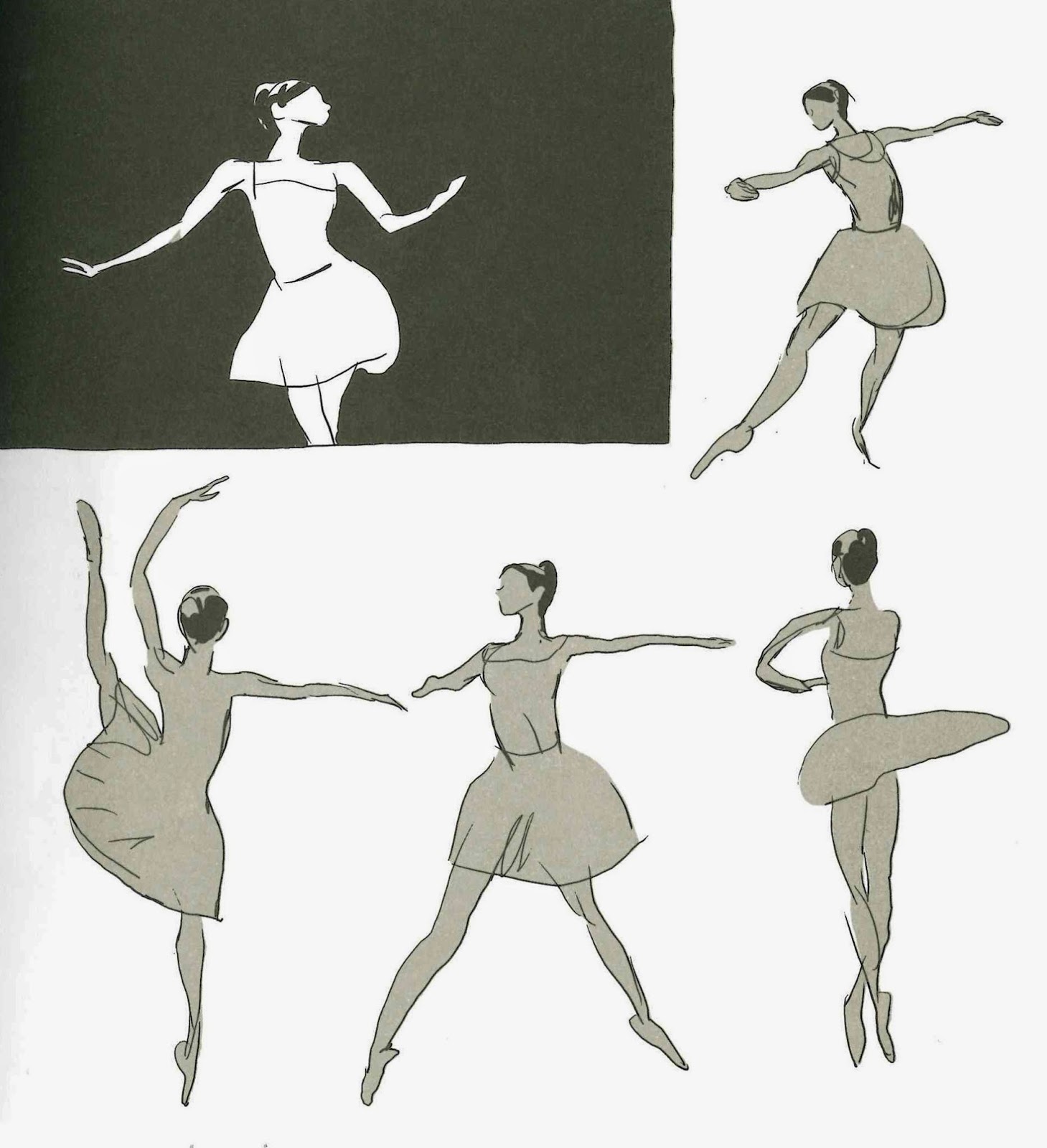 As mentioned, Vives likes readers to do legwork; rarely using internal monologue or omnipresent narration- it's all down to the art, dialogue and the reader. 'People don't see what you don't show them' Bojinksy reiterates to Polina- 'you manage to get across a lot emotion in a very simple way' a friend tells her- and it's these principles Vives seems to be applying to his own art- express -show the emotion, use words only  where necessary. It would explain why Vives is fascinated with the human figure- his mastery of it, the ability to bend it, to squeeze as much as he can from it to depict a range of body language that will convey whatever he chooses. It gives his books a contained, tight feeling, because often the reader is interacting with the art on a more intense level, searching for nuances and meaning. It's there in the hunch of shoulders, or the tilt of a head, the pulling up of a collar, hands in pockets, widening of eyes, the curl of fingers. If that makes it difficult to connect to the central character, Vives does a nifty trick where he has Polina looks out at the reader, staring into space, or smiling at a video, but looking directly at you.

I really enjoyed this lovely one-two- the first page from the opening pages of the book as a very young Polina takes part in the ballet school entry trials, watched carefully by a panel of teachers and Professor Bojinsky, and the second page from the closing section of the story, with a grown-up Polina returning to her former school to inspire and chat to the student body, giving them an impromptu dance demonstration, as the young faces look up to her in reverence. 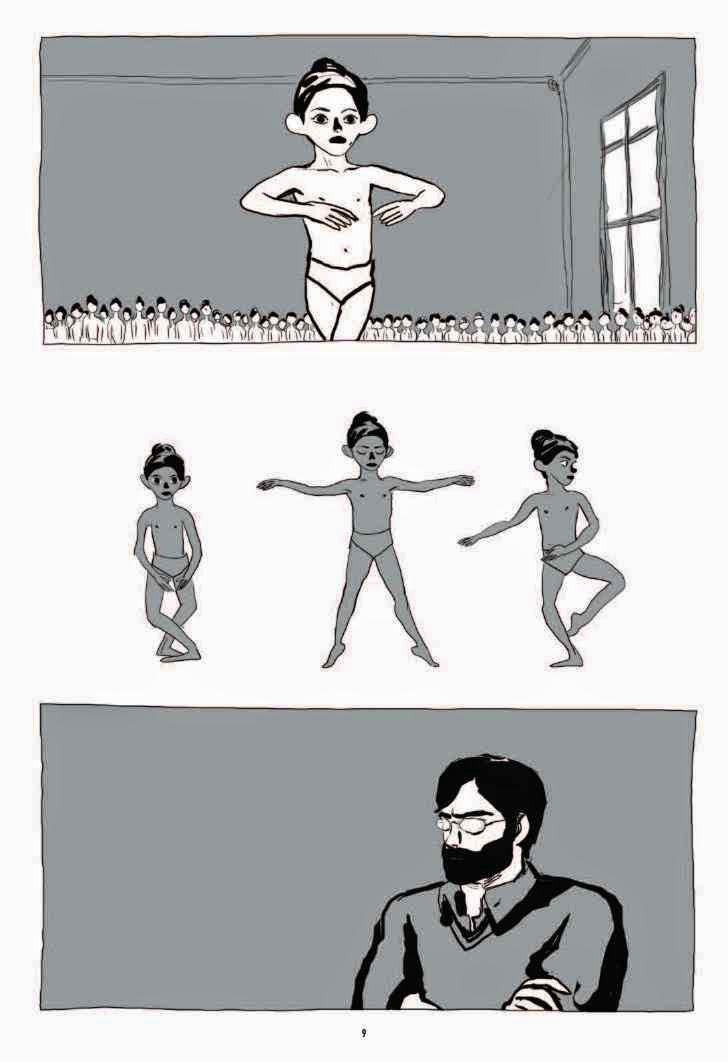 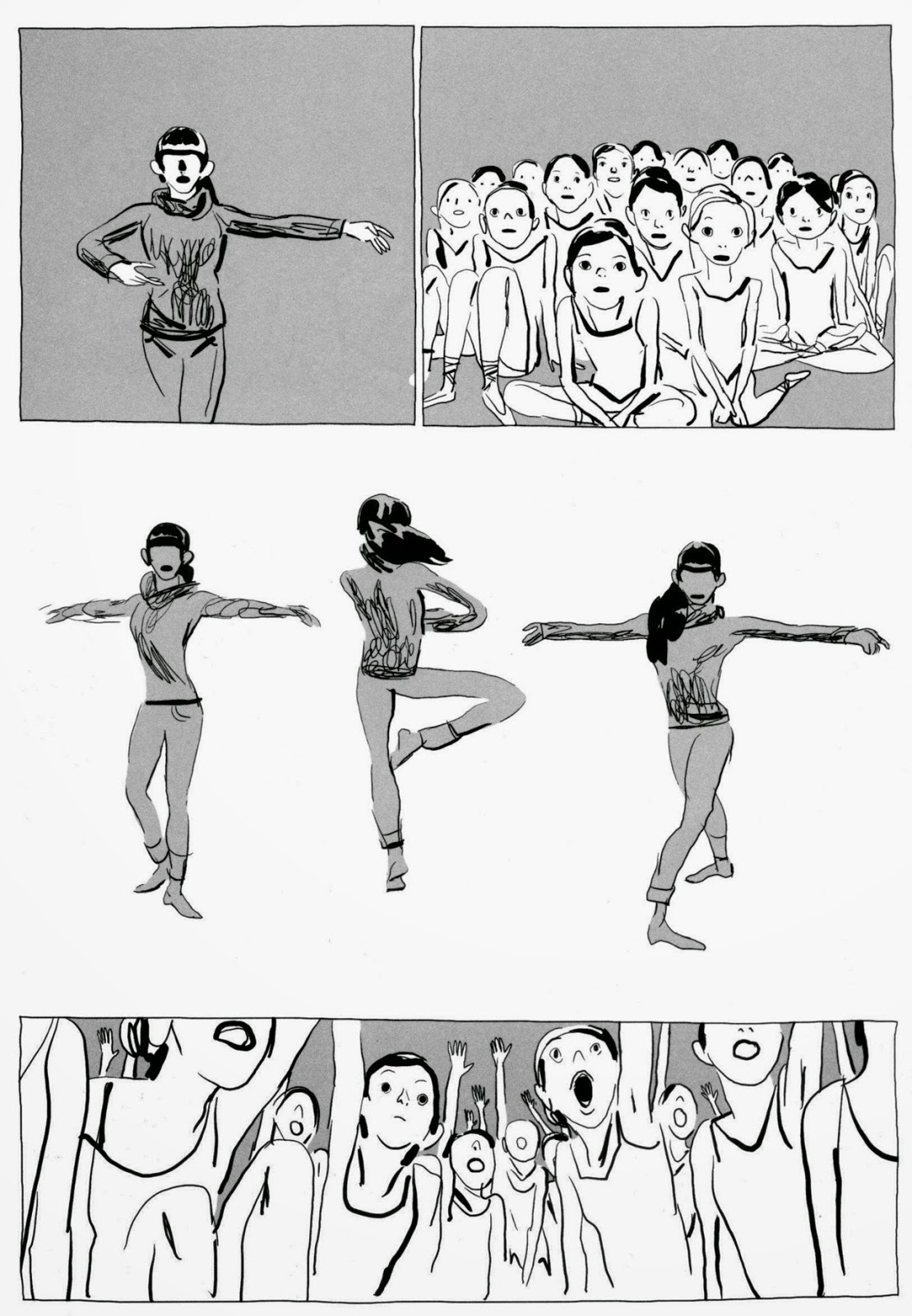 It has one of the most beautiful endings to a comic, too, as Polina sits at her apartment window, half-smile on her face, as Vives closes in, watching a video of Bojinsky tutor her younger self jumping and turning:

'There's no point soaring as high as you can if you don't take the time to look out.

Whilst you are at the top, take that time.

A glorious triumph of a book. 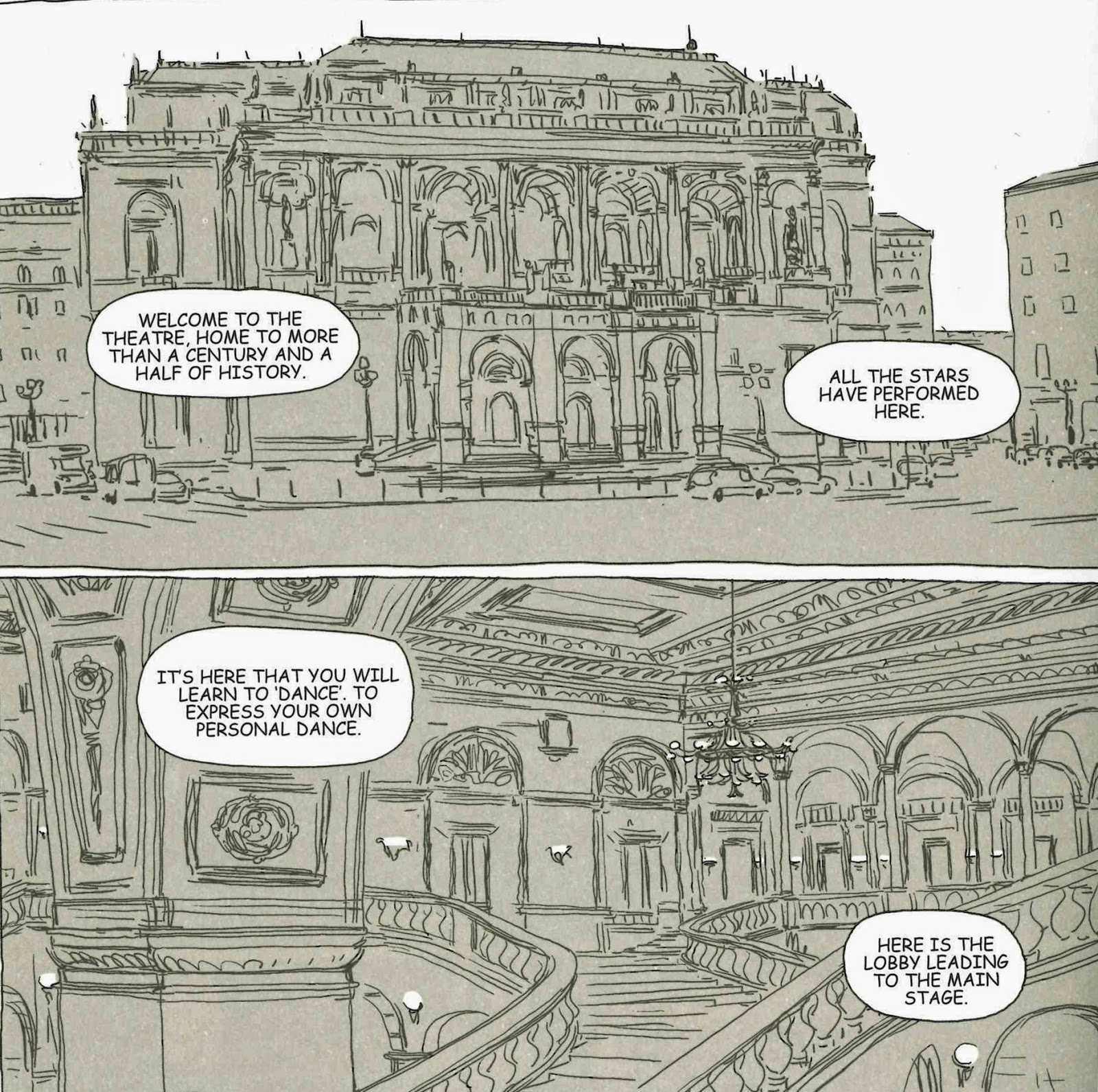