Get acquainted with the art of Felicia Choo 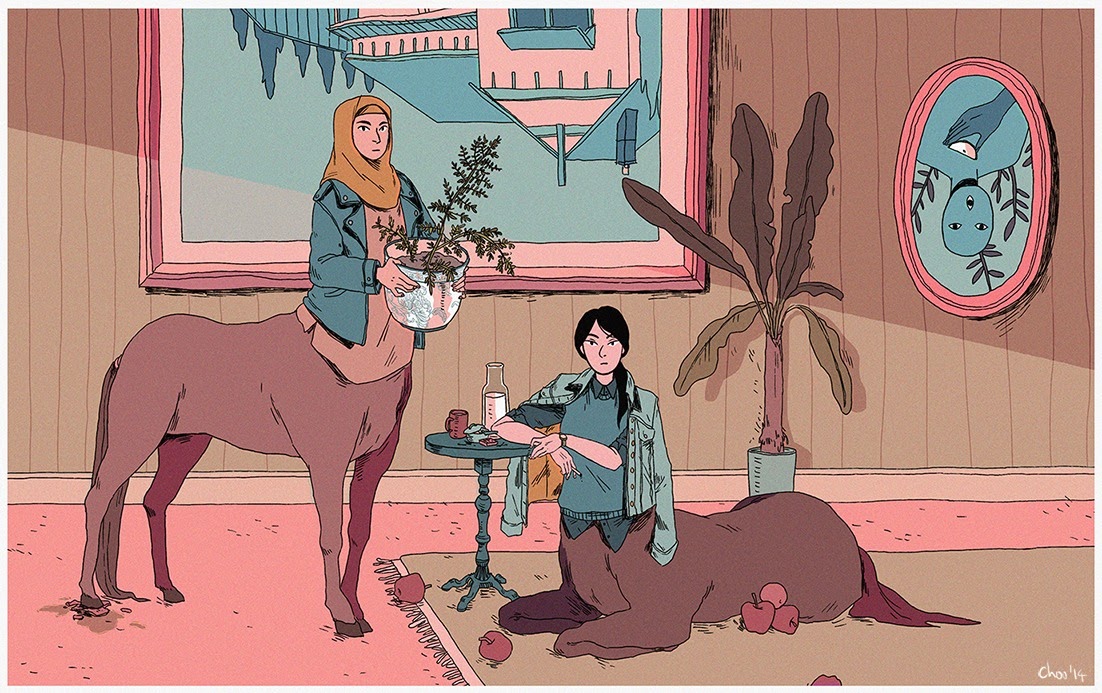 Whatever your thoughts on Tumblr, for the comics fan, it is a fantastic way to both follow, and discover comics, and creators on a truly international level. While established artists debate the usefulness of the blogging platform in terms of its ability (or lack thereof) to translate popularity into actual sales, for the budding creator, it's a valuable tool when starting out and getting eyeballs on your work. Many editors- Francoise Mouly and beyond have talked of using the site to sift for fresh, new talent, looking for artists to hire. It was via Tumblr I first came across the work of Australian artist Felicia Choo. Choo's comics and art are instantly eye-catching- not only for the aesthetic beauty on display, in particular the wonderful use of colour, but there's a level of capability, of assurity, that indicates a passion and thoughtfulness for the art, and  -to use up my one cliche per piece- a bright future. Choo completed her Bachelor of Illustration last year; and is now looking to make professional forays into the medium- what better time then, to catch up and discuss all things comics.

Tell us a little bit about yourself.

Well hm. I’m 21, I live in Melbourne Australia, I get seasick easily, and I’m allergic to cats.

You'll be graduating in May- did you find studying helpful to your development as an artist? I know people take to it differently- some leave, finding it 'undoing' their style, others feel it enhances their work and equips them with greater tools, etc.

I did find the study helpful to an extent, but at the same time it wasn't as useful as I was hoping it would be. Australia hasn't really got much in comparison to the US when it comes to art or illustration courses though, so I guess I was expecting a little too much. I made some good friends and had my first life drawing classes which were great, but I found the stress of the more theory-driven activities weighed me down a lot and I didn't do as much drawing during those periods. I’m not sure if I would have benefited more if I had dropped out, but I pushed through a depressing final semester. I learned from my experiences one way or another! I seriously doubt I’ll be doing any more study though, it really wasn't for me.

How did you get into comics- are they something that have always been around you, and you've read, or did you become more aware of them later? What sort of things did you read?

Comics were something I really enjoyed when I was about ages 5-12, but at 13 my mother went through what we refer to now as her ‘hardcore church era’ and she banned me from reading comics and watching television. Thanks to the internet I managed to sneak some manga into my life without her noticing, but as soon as I turned 18 and she released me from my church services I got straight back into the swing of things and caught up on everything I missed in those 5 years. I actually can’t remember what the very first comic I picked up was, but I remember being vaguely obsessed with Naruto.

What is the Australian comics scene like? Is there anything going on - events, community, creators, where you live? Is it something you're aware of or involved in?

I’m a bit ashamed to say I have no idea! I’m not very active in the local scene, I only know a few people working in comics in Australia! Most of them not in Melbourne. I’m a pretty nervous and solitary person unless I’m behind a screen, so meeting new people is a little bit terrifying to me. I know there are few conventions that happen in Melbourne but I rarely attend unless I’m physically dragged out of my house by my friends.

What is that you get out of comics, as a reader, and as a creator? What do they give/offer you?

As a reader I like having the actual book in my hands, I prefer to buy physical copies rather than read online. Something about the tactile nature of books and the page flipping gives me a lot of enjoyment and I’m not sure why! That being said, I love how people have been taking advantage of the internet and are being so creative with their presentation! Seeing comics like Thunderpaw presenting a story with animated elements and Margot's Room utilising the scrolling aspect of an internet browser is really exciting. As a creator, I find it to be the perfect mix of writing and drawing to keep me going. It also offers me a lot of space to experiment, with panelling and pacing and using type, so it’s not really something I can get bored of.

You make pretty awesome gifs and use motion well- is animation something you're interested in perhaps pursuing?

I don't think I'll be pursuing animation, it's very much a hobby for me. Although the course I was in taught a little animation I didn’t find it helpful, we only really learned about tweening. Eventually I taught myself some animation basics simply so I could make little bits of my drawings move.

Who are some of your favourite comic creators/books?

There are so many! It’s going to be really hard to pick, but I love virtually anything by Moebius, Mike Mignola, Naoki Urasawa, Katsuhiro Otomo, Hiromu Arakawa, Kerascoët, Junji Ito, Jillian Tamaki, and Luke Pearson. I’ll also buy basically anything that Nobrow puts out because I’m really into their beautiful publications, I even have a shelf dedicated to just their output.

What are you influenced by outside of comics?

Plenty of stuff! Television and film are a big influence for me at the moment, I especially love seeing how shots are framed and I think it informs the way I frame my drawings. My regular rewatch list consists of Twin Peaks, The X-Files, Garth Marenghi’s Darkplace, Jodorowsky’s Holy Mountain, and The Royal Tenenbaums. Some other assorted influences of mine are Rene Magritte, Edward Gorey, candid photography especially polaroids, The Moomins, and my peers of course.

A lot of your work has elements of horror- sort of a quiet horror- and also a sweetness, sort of a refined, distilled manga aesthetic. Are there any areas you particularly want to explore, or themes you enjoy writing about?

I don’t really consciously decide to write or draw unless it’s for a larger project that I need to share with others before completion. I like having flexibility with personal comics and drawings so I tend to just wing it without any writing involved. Also since I feel like I’m still in my infancy when it comes to comics, I like having the freedom to just explore themes and styles. I find myself always leaning toward more morbid themes though! I guess it’s hard to hide what I like best, and I like everything a little spooky.

You use colour so beautifully- is that an intrinsic grasp, or a skill that's developed more deliberately from looking at things and taking them in, and an idea you have in your mind?

I find colours to be the most intuitive but also difficult part of an illustration. I used to obsess over them, and I would compose palettes using all the colour theory I could remember before starting to add them to a drawing. It was a pretty stiff and boring process, and I often wouldn’t like the end result. Now though I find I like my drawings more when I'm having fun with colours. Just throwing them down and tweaking them until I like what I see always yields the best results. I guess my colour sense matured over the years? Or at least I hope so. 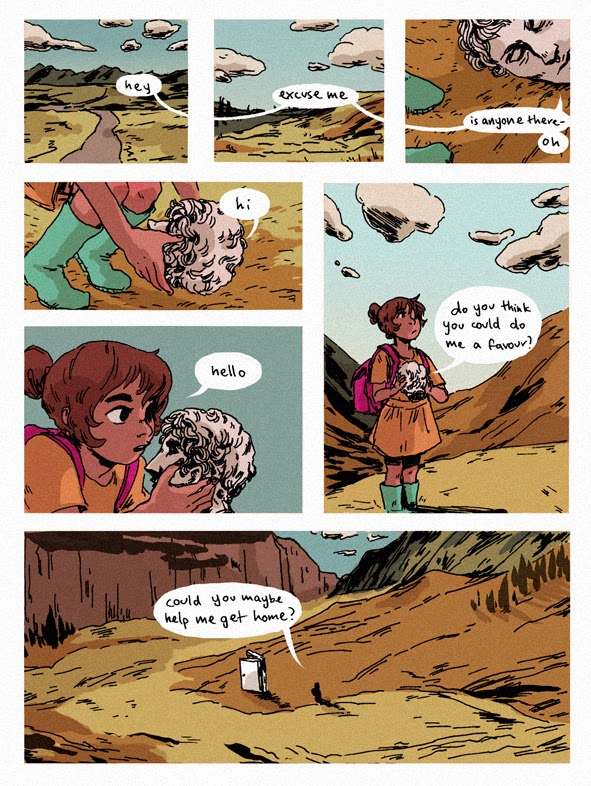 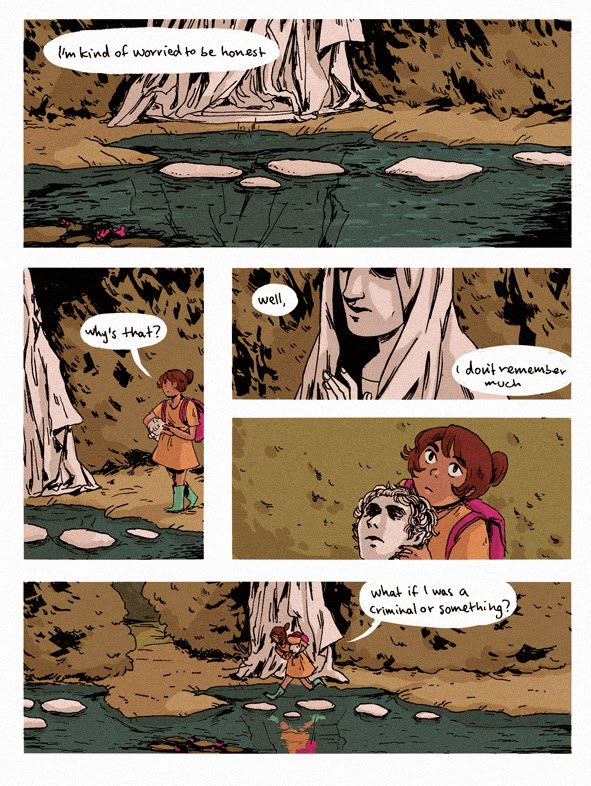 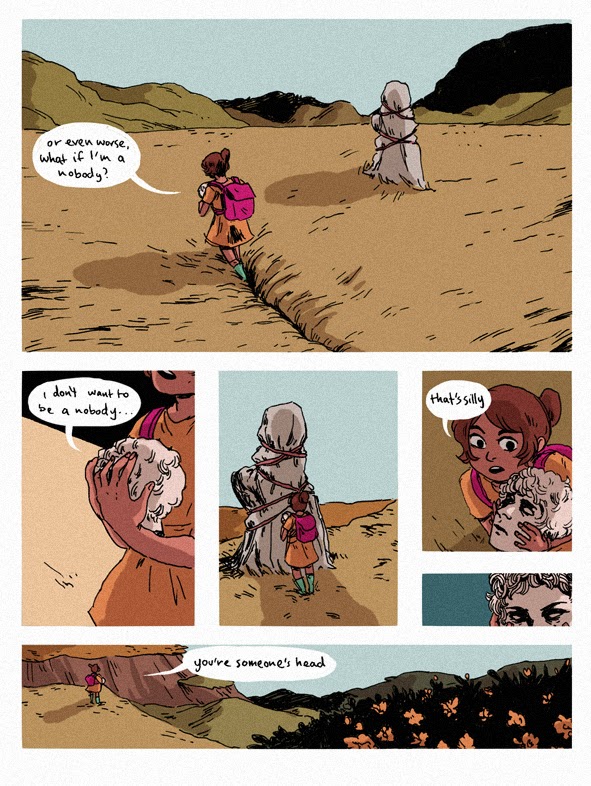 Do you take much notice of the culture surrounding the medium- issues affecting it, changes taking place- do you see those as affecting you ever, or something that you keep abreast of, to be aware?

I try to keep up to date with everything that is going on because i think being aware of what is happening is really important, but at the same time I try not to get too involved. I’m very pleased to see more and more very successful women and poc in comics, both in writing and illustrating! It really gives me hope, since a lot of people around me tried to discourage me from pursuing comics telling me it was a small space for a very select group of people, which is a little ridiculous and untrue.

How helpful has it been to have an online presence- both in terms of people being aware of you and your work, or to you in terms of having an audience, and also as it being much more easy to access a broad spectrum of work to read and look at, and communicate with artists?

The internet has pretty much been the reason I’ve been able to expand my interests and abilities. I like how I can basically throw up some drawings and get instant feedback on them. It's given me the opportunity to speak to many people I admire, I got to know a lot of great and encouraging people, and gained access to a lot of inspirational material. It’s also the only way I’ve been able to get work, so I’m pretty fond of the internet except for when I fall into the internet black hole for three days and get no work done.

Publication is the dream, I think. I would love the opportunity to work on something for print! Ultimately though I would just like to be able to support myself doing something I enjoy, I want to be able to devote my time to just drawing comics and thinking about drawing comics and talking about drawing, and comics. I’d also like a lifestyle that allowed me to have more dogs.

I have a comic project I’ve been mulling over for a really long time, but hopefully I’ll have enough work done to release it into the internet wild sometime this year. I also have a food related batch of illustrations that I’m working on for a zine. Other than that I’m just trying to draw as much as I can!

Currently watching: rewatching all the Cube films
Sound: My dog, snoring in the laundry
Closest thing to hand right now (not your computer!): a congregation of empty coffee mugs
One food: beef hot pot
Could not live without: warm socks
Raising an eyebrow at: my tablet, which is very very old and in need of replacing
Something beginning with 'g': green beans

You can find Choo's Tumblr here, and on Twitter here 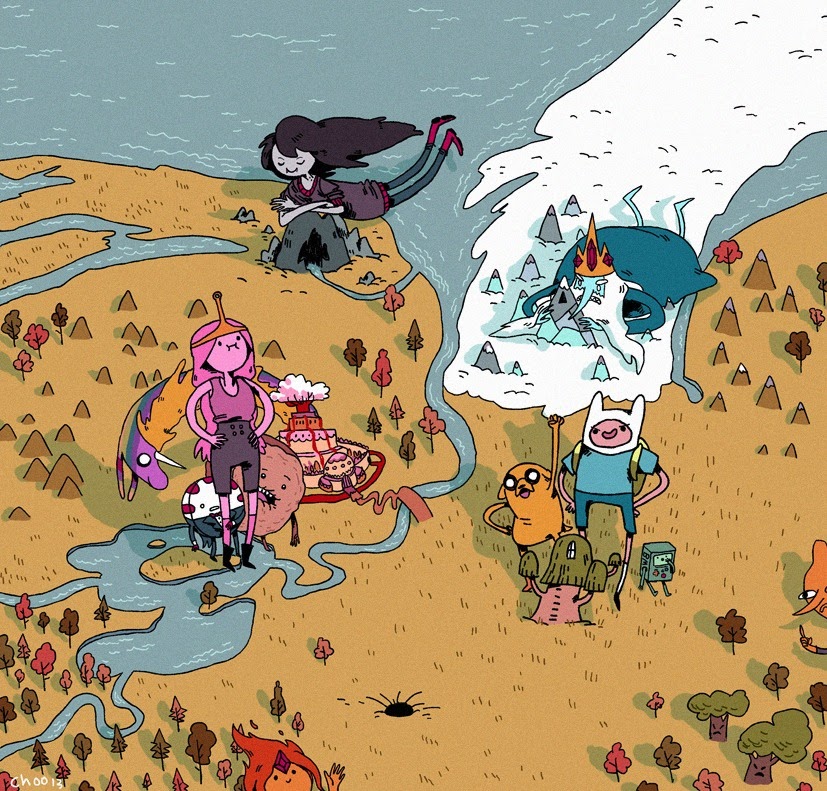