Time for the semi-regular update about what I'm reading and what I've bought (or a segment of it at least), set against the back-drop of my magically colour changing carpet. I really should get Instagram and just filter the shit out of everything.

I read a lot more serialised comics since I started working at a comic book store: initially, I went through a period of trying to read as much as possible, so I'd be able to provide a better service to customers, but a) that wasn't feasible (not to mention it didn't leave time for me to read the things I actually wanted to read), and b) when I was hired, the employment specification required a candidate who was more familiar with independent and small press, so. Additionally, I think I read pretty widely anyway, and the guys cover the areas I'm not as knowledgeable about- it works out. 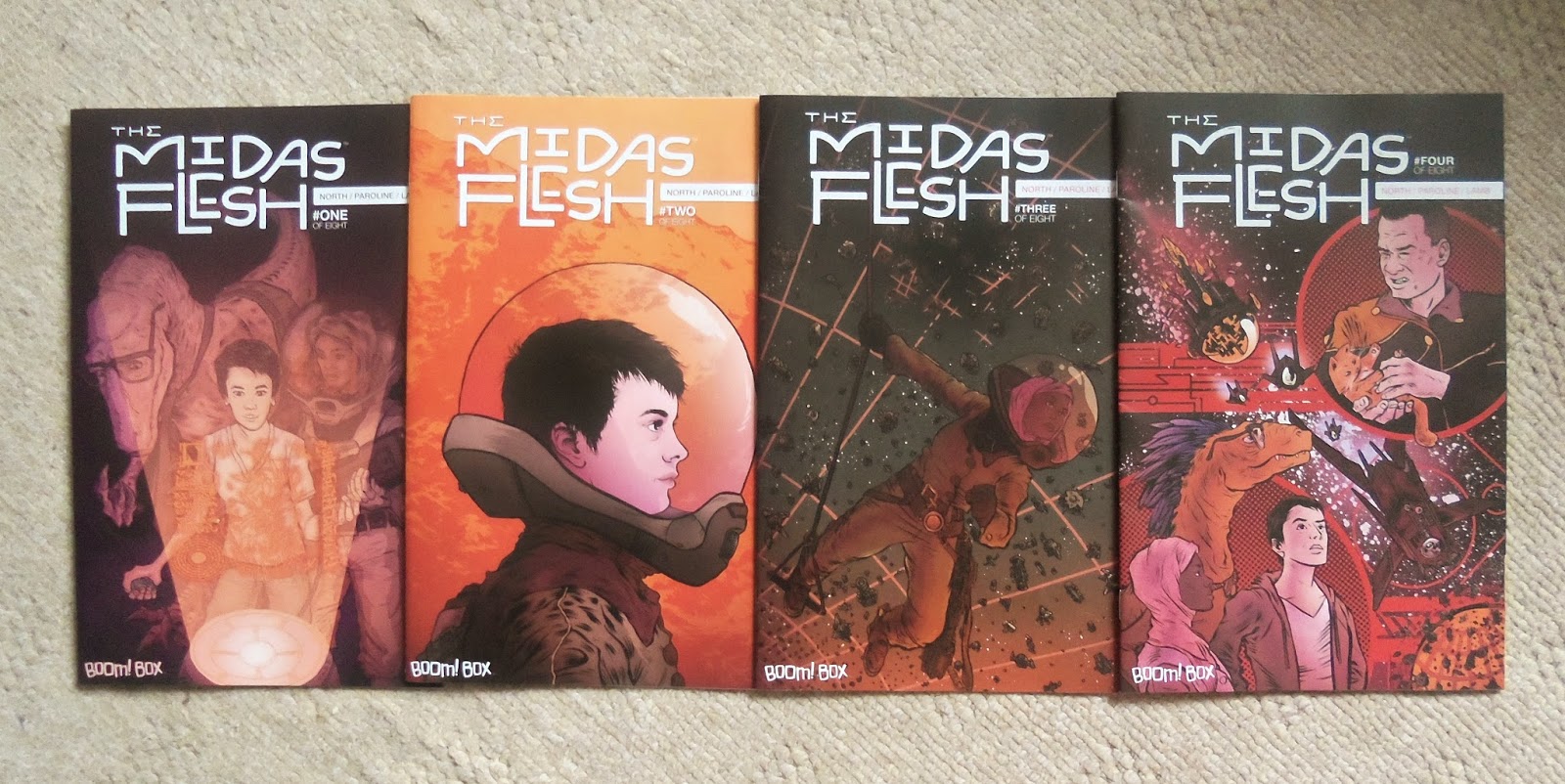 That said, I'm aware of and pick up a lot of titles I normally wouldn't: case in point: The Midas Flesh, illustrated by Braden Lamb and Shelli Paroline, and written by Ryan North.. It seems to have flown under the radar somewhat, or at least I've not read much about it, which I find surprising because it's a really great comic that manages to amalgamate a host of things: sci-fi, Greek mythology, dinosaurs- do each of them well, and still come out as very much its own thing. The premise sees a spaceship with a crew of 3- Joey, Fatima, and Cooper (bespectacled scientist dinosaur) flying out in search of a mystery planet: Earth. But this is Earth that never progressed beyond Midas and his golden touch, with the king having turned it all into gold: a frozen, dead planet with a remarkably well-preserved (although seemingly dead) Midas at its centre. As the story unfolds, we learn that space is embroiled in an intergalactic war/heading fast into dictatorship, and the friends plan to use Midas and his unique ability as a means to bring about peace. Of course things are never that simple, and there's a reason Earth has been hidden from the radar of everyone else for so long. The pace set is beautifully measured- with each issue serving up some action, yet the narrative unfurling slowly- tricky to pull off.

North, Lamb and Paroline have created a high quality all-ages comic, suspenseful, engaging,  smart, funny, and one that ticks a hell of a lot of boxes of what I constantly read people are looking for- diverse and representative: 2 intelligent, capable female protagonists- one a pilot, one a pilot/scientist, one of whom also happens to be a Muslim woman of colour. Those aspects are never shoved in your face at any point, but presented as completely natural- which they are- I point them out in case that's something you're looking for, and in a bid to further flag up how good this comic is. And a dinosaur- did I mention the dinosaur? The Midas Flesh is a monthly comic, currently at the half-way point, with 4 issues released, and four to go (the 5th comes out this month), and something you should be reading. If you it's too late, and don't want to start bang in the middle of the story, ask at your comic book store- they often have older copies, or may be able to order them in for you. The comic also has a dedicated website here, where you can view preview pages from each issue, and a whole lot more.

Heyyyy, Brandon Graham goodness. It seems Graham's doing a lot of collaborative work recently, smaller projects and covers which is nice as a fan- it means you still get things from him regularly: on the left you've got the first issue of Shutter, illustrated by Leila del Duca, and written by Joe Keatinge (somebody on Tumblr bought the original art to Graham's variant cover- as shown in the photo below- and I'm so fucking jealous, I don't really want to think about it), and on the right an Empowered one-shot written by Adam Warren, also illustrated by Graham. I was going to take a look at Shutter anyhow; I liked how Keatinge was talking about the old-school, adventure-story-in-the-vein-of-Tintin vibe he was aiming for, so getting a Graham cover for it was a bonus, especially one so lovingly homaged. The first issue was spot-on in terms of capturing that tone of classic kid's adventures: spunky kid globe-trotting around the world with her dad, who dies, fast forward to adult-hood and she's a children's writer. I loved that detail- it's a recurrent trope, almost, meta-like in authorial reflection. But I'm not going to lie: I'm going through a major Herge phase where you simply have to say Tintin and I'm going to look at the thing.

Empowered, I don't read (and I've not read this yet), but I'm a huge fan of Graham's art. More so than his writing, which is very much its own thing, which I respect for its imagination, but isn't really for me. But his art- yeah. His art, to me, is the most well-done fusion of ligne claire and Japanese manga, so aesthetically pleasing, just clear flowy lines- the cleanliness and clarity of it, even when it's detailed- I really appreciate it. It transcends its influences, too, you can easily recognise anything he's drawn. He's also one of those artists who you can tell loves drawing- that transmutes in people's work, and it's present in his. 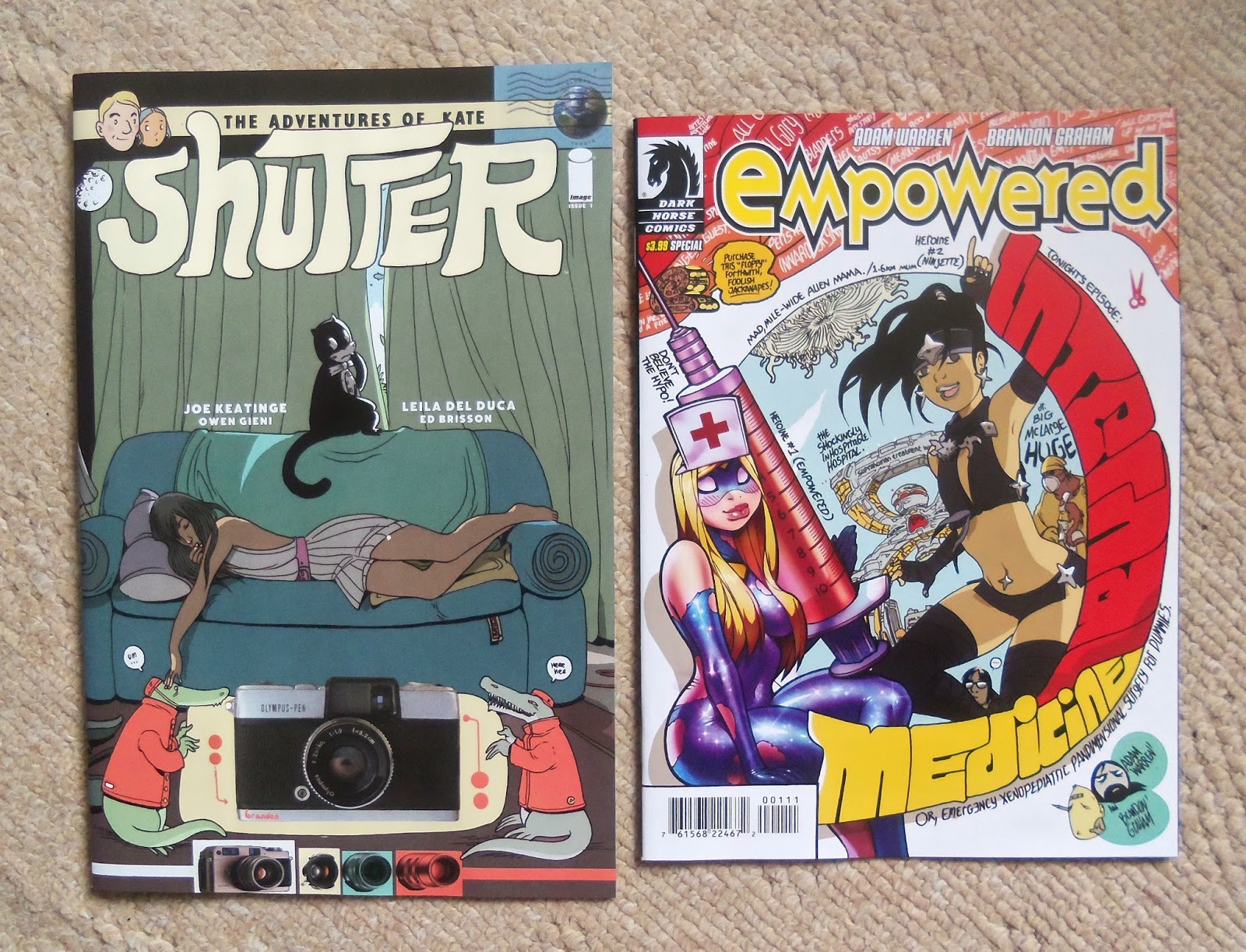 It's going to sound weird that I say this because I work in a comic book store, and a great one at that, but I like visiting different ones if I can. We're lucky enough to have 3 comic books stores in Leeds, and it's surprising how each one manages to have an identity of their own, and - major books aside- the variation in stock. Steve and I went out on Friday, and I dragged him around a bit, picking up the Gerry Alanguilan book, Elmer, along with Sam Hiti's El Largo Tren Oscuro (The Long Dark Train). It cost about £10 for both, which I consider a good deal. They're both older books; Alanguilan's was published in 2010 and Hiti's even further back, in 2005.  Been meaning to get hold of a copy of the Hiti book- a long, flip book format comic about a train headed to Hell- and that completes my collection of his work, I believe.

I think everybody likes that feeling of discovery, especially in a exposition heavy world where so much is available, and made available, to us, so it's sort of thrilling to come across a book I've never heard of before, and which looks flat-out amazing: Elmer's set in a world where chickens have suddenly acquired the intelligence and consciousness of humans, recognise themselves to be sentient and are campaigning for equal rights as humans. Looking forward to reading this- sounds like Animal Farm crossed with Duncan the Wonder Dog. 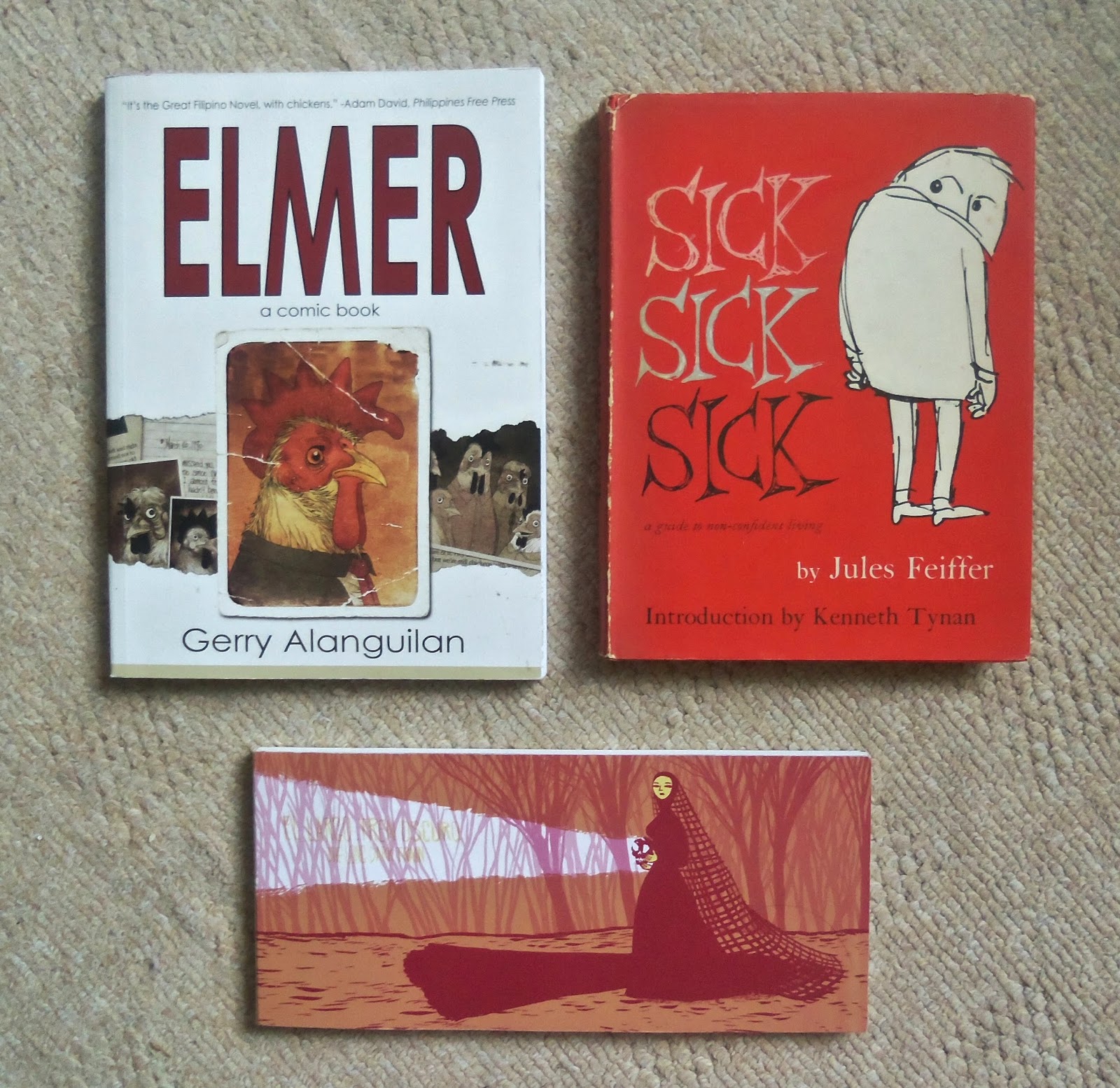 Sick, Sick, Sick I bought second-hand from Amazon, on Tom Spurgeon's recommendation and loved it immensely. I'm aware of Jules Fieffer and his standing as a cartoonist, but hadn't read anything of his prior to this. I think he was about 25 when he produced this collection, and it's glorious. You know when you expect nothing from a book because you don't know enough to know what to expect, and then it turns out to be fantastic- well, that. Acutely observed, sharp, bloody funny- he reminds me of Posy Simmonds, apart from that I always felt Simmonds could never really take down the middle classes she was cartooning because there was a genteel streak, an affection that obstructed it. I'm not saying you have to loathe something to take the piss out of it, but I do think you have to stand a little apart from it; Simmonds' work never quite rang wholly true for me. Fieffer doesn't suffer from that problem.

I like how Sick is both of its time, in its portrayal of ad men and politics, and yet timeless- people are people, even decades on, and culture, it seems, rarely changes drastically. Not that of the upper classes, anyhow, with the partying, and shagging, and Taking Up of Pursuits. His cartoons are often very minimal, but the emotion's all in the lines and curves and angles, which convey so much. Going to be hunting down the rest of his work: instafan!

Got the special edition of Oliver Schrauwen's My Boy from Bries, which is a thing of beauty- look at that cover: 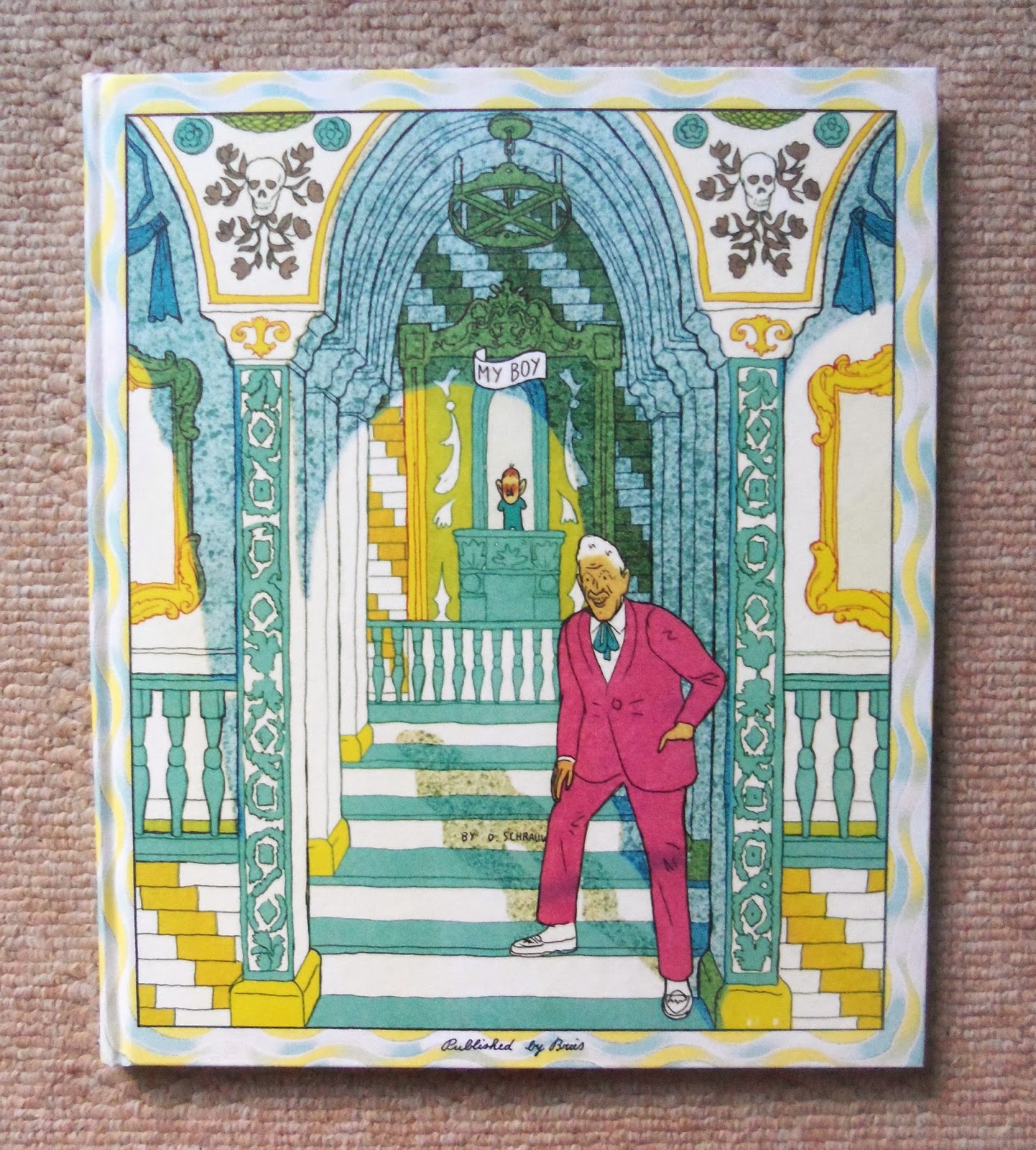 It's a slightly surreal thing, following the trials of a stately Victorian gentleman and his pocket-sized, baby heir, where Schrauwen mocks the British 'oh by gum, golly' facade of proper-ness, instead envisioning a rather frankly do-lally older gentlemen who has no idea about children, but not in the manner of 'I shall attempt to raise him as best I can and hire him a governess etc,' but 'I'll take my 1 year old to the zoo and allow him to smoke cigars etc.' A pastiche of those warm, Dickens novels, eh? Regardless, it's captivating to look at: the oddness of the subject matter married with spider-fine lines, faintly worn colours to mimic a yellowed newspaper effect. The zoo story is stupendously illustrated: as if the more absurd and objectionable things get, the more beautiful they appear in some effort at placation. 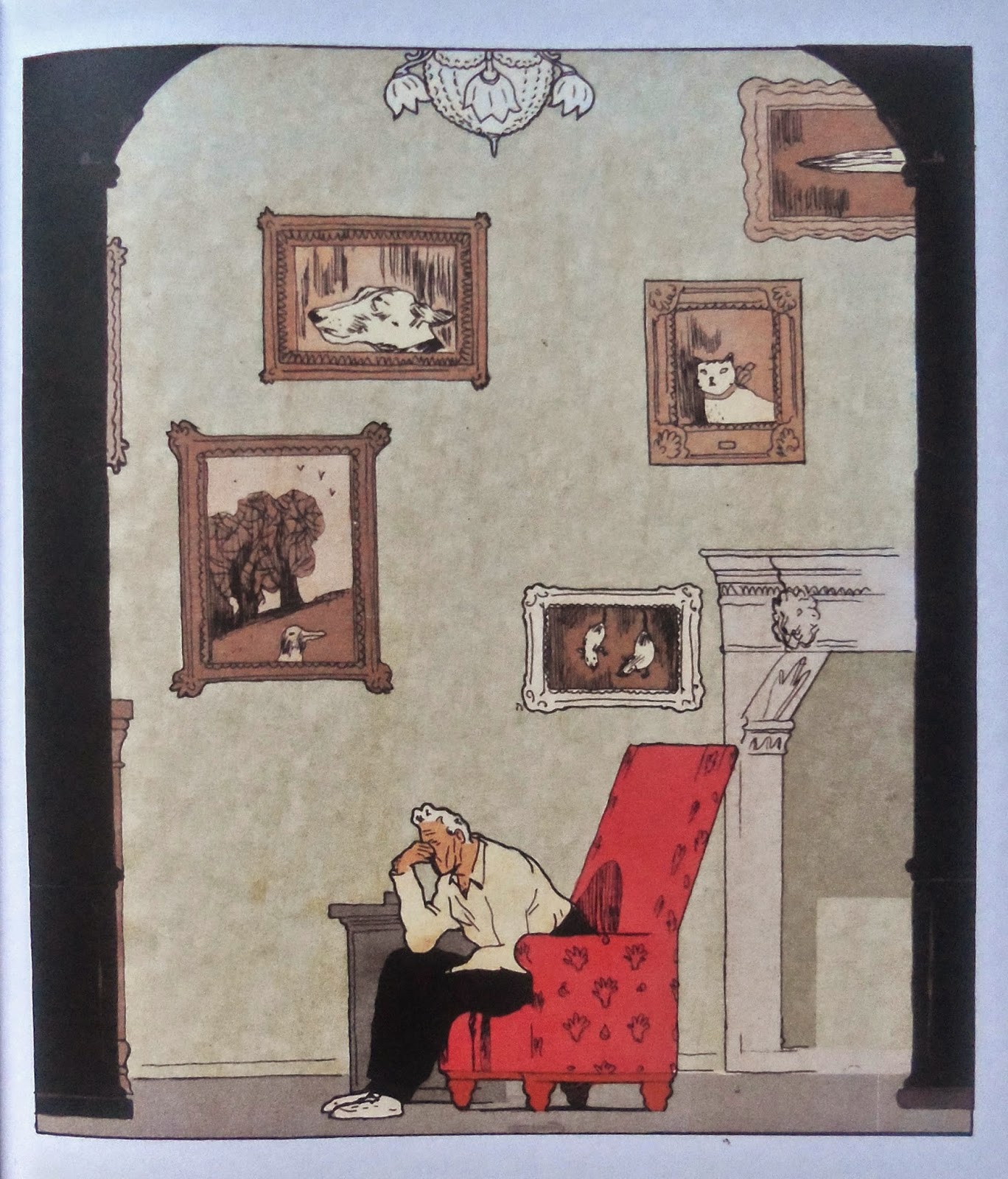 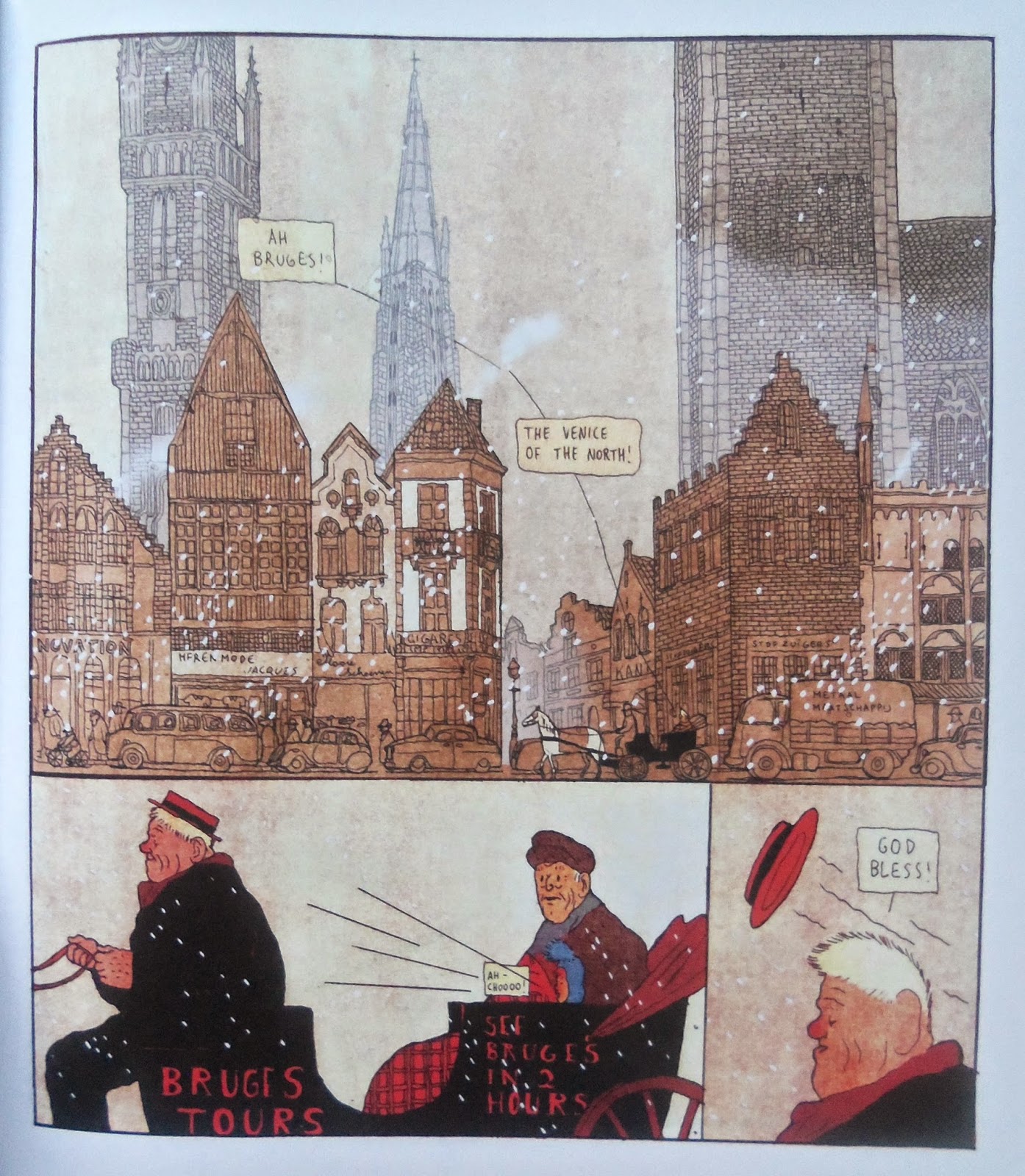 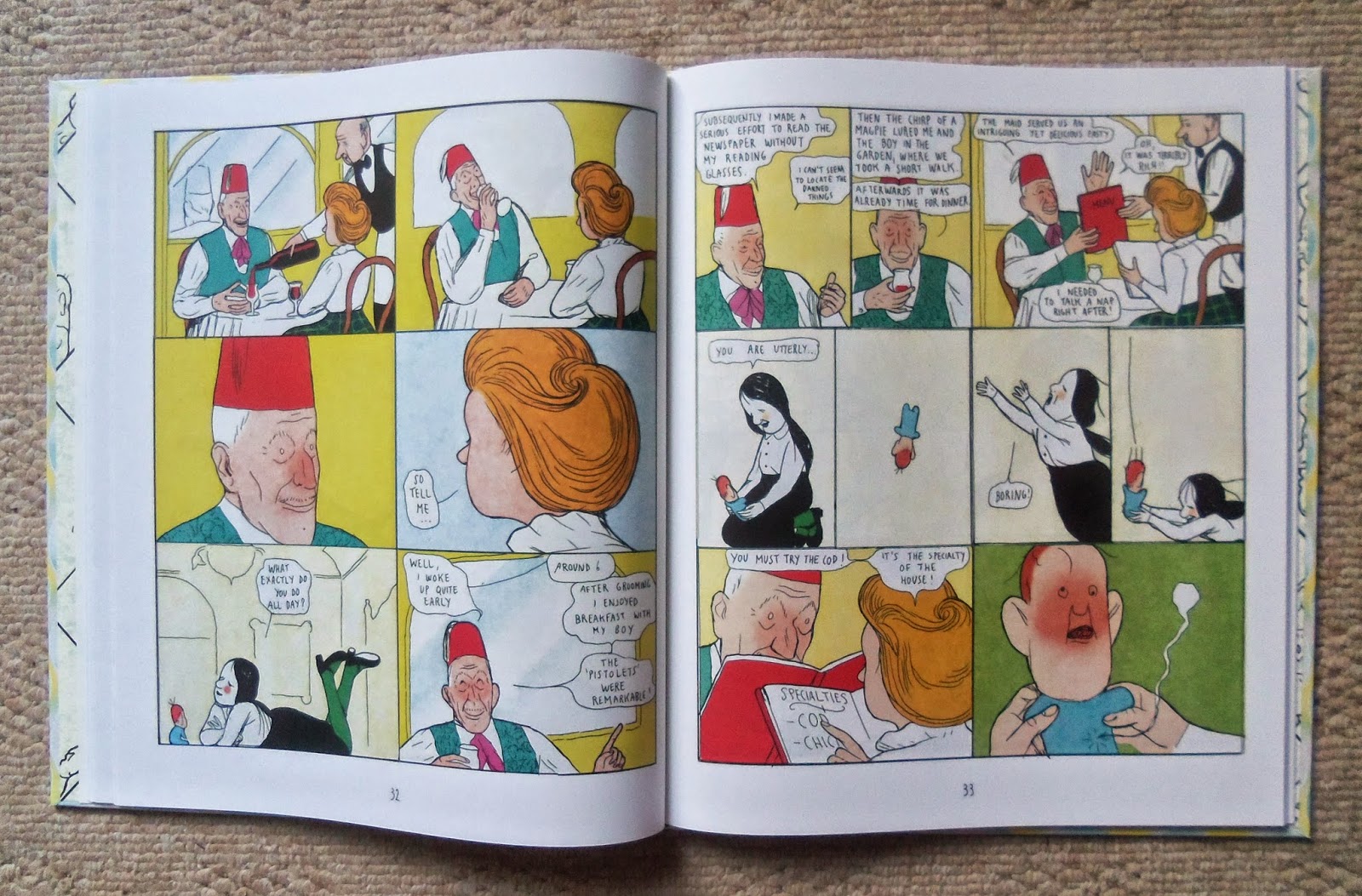 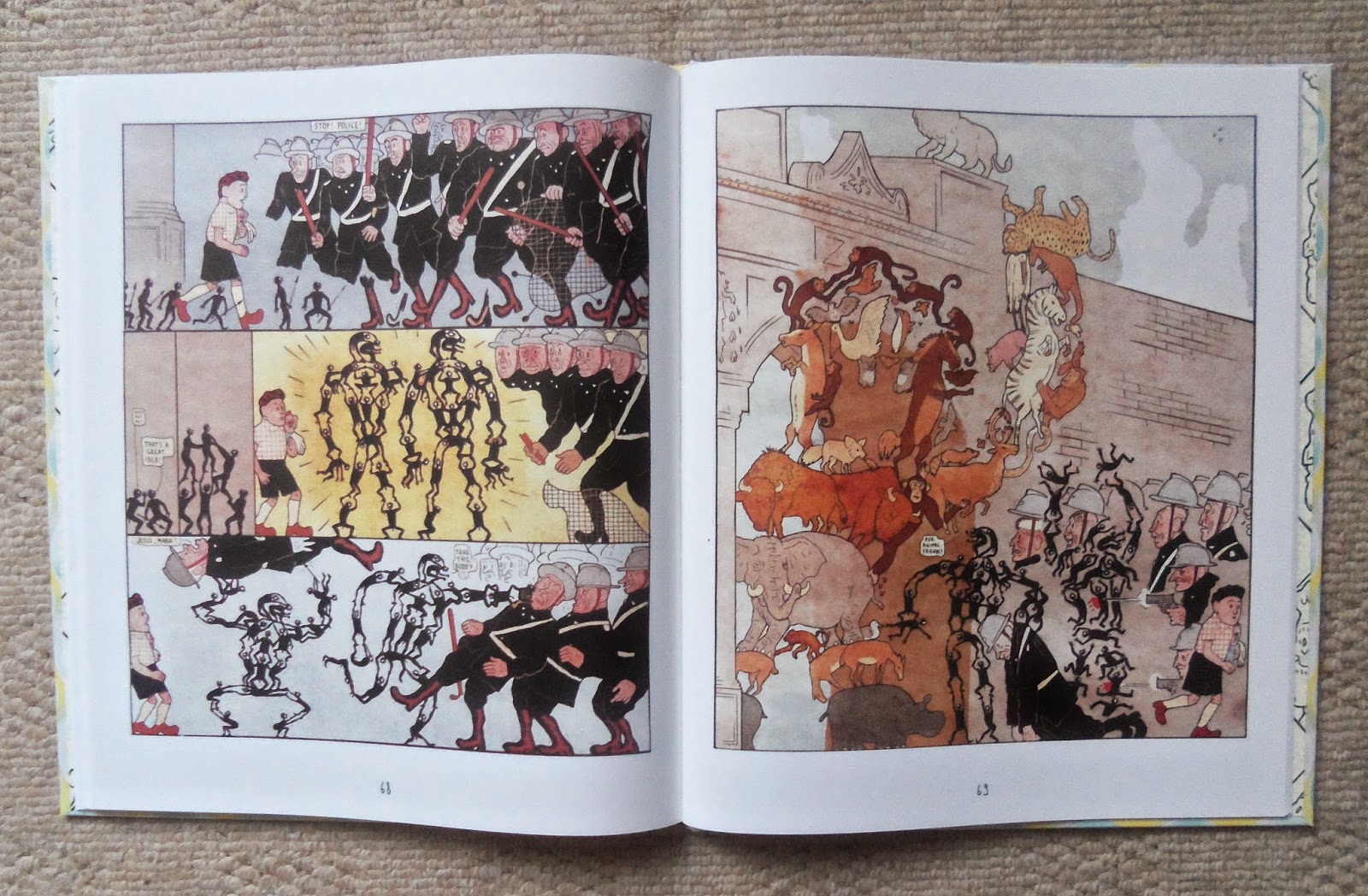