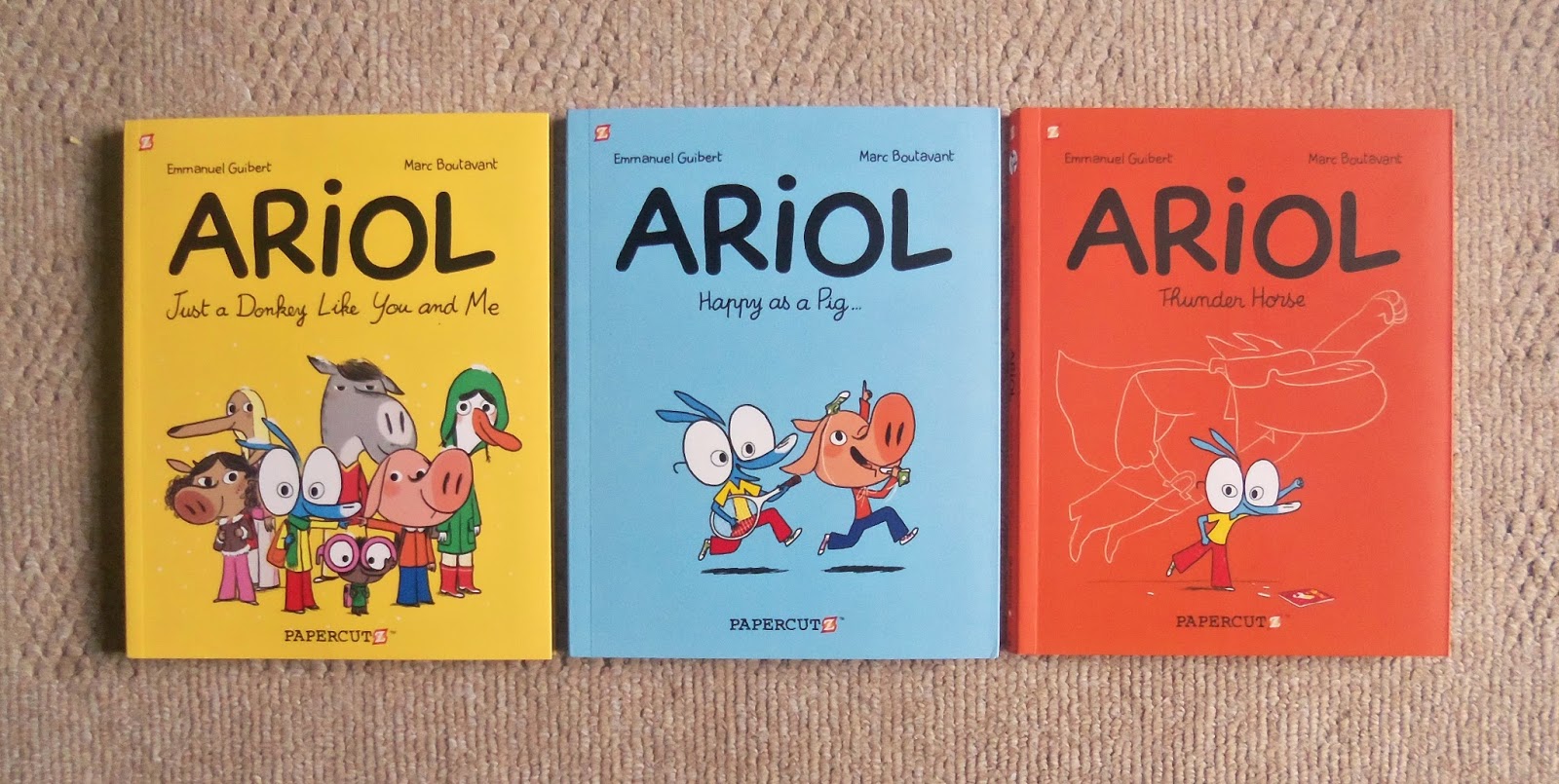 It's been a while since I wrote, or added to, the comics for kids list, and after putting together this month's 'With pound in hand,' gathering April's most anticipated graphic novel releases, including the fourth volume of French all-ages comic, Ariol, I realised I've never actually talked about the series here, so let's address that. Ariol is published in English by US publishers, Papercutz, who specialise in all-ages comics, and for some reason it's another of those imprints whose books seem to be strangely under represented in the UK; this is not, as far as I'm aware, due to any distribution problem (stores can order them via Diamond, and no doubt various other book distributors). Papercutz publish quite a few 'property' comics- Power Rangers, Disney Fairies, as well as translating Peyo's The Smurfs, and most recently, the hugely successful Lego Ninjagos, but the undoubted gem in their crown is French children's bande dessinee series, Ariol. Illustrated by Marc Boutavant (Mouk) and written by Emmanuel Guibert (The Photographer), Ariol follows the everyday life of its titular character, a young, blue, 9 year old donkey, and his cast of animal family and friends.

And when I say everyday, I mean everyday- nothing hugely remarkable or unbelievable happens- Ariol chats to his parents, has his best friend, Ramono, over to play, goes to the shop to buy stickers, accompanies his dad while he uses the ATM, visits his grandparents, reads his favourite comic, Thunder-Horse. But there's a a straight-forward charm to that- yes, children have imaginations and love to be immersed in new worlds, but it's lovely, and important, I think, too, to have their world, and themselves reflected back at them, for them to see the ordinary, and all it encompasses- humour, differences, accidents, love, friendships, falling outs, - all of that presented as being enough. It's a beautifully, evenly written comic which never panders or postures to any of its audience- there's a great story where Ariol asks his mum  about the phrase 'dumb-ass' and why donkey's are considered stupid, and horrified, she begins to explain to him how people can be ignorant and why he must never think of himself that way. Ariol's busy following his own thought process however, musing on how pigs considered dirty and his best friend, Romono (a pig), is indeed, so perhaps there's something in the way people think after all. It's pretty much how you would imagine a conversation about prejudices with a 9 year old might go. It's clever writing from Guibert who wisely refrains from shoehorning any stodgy ideology, instead just sparking a point of discussion or thought, in service to the narrative. 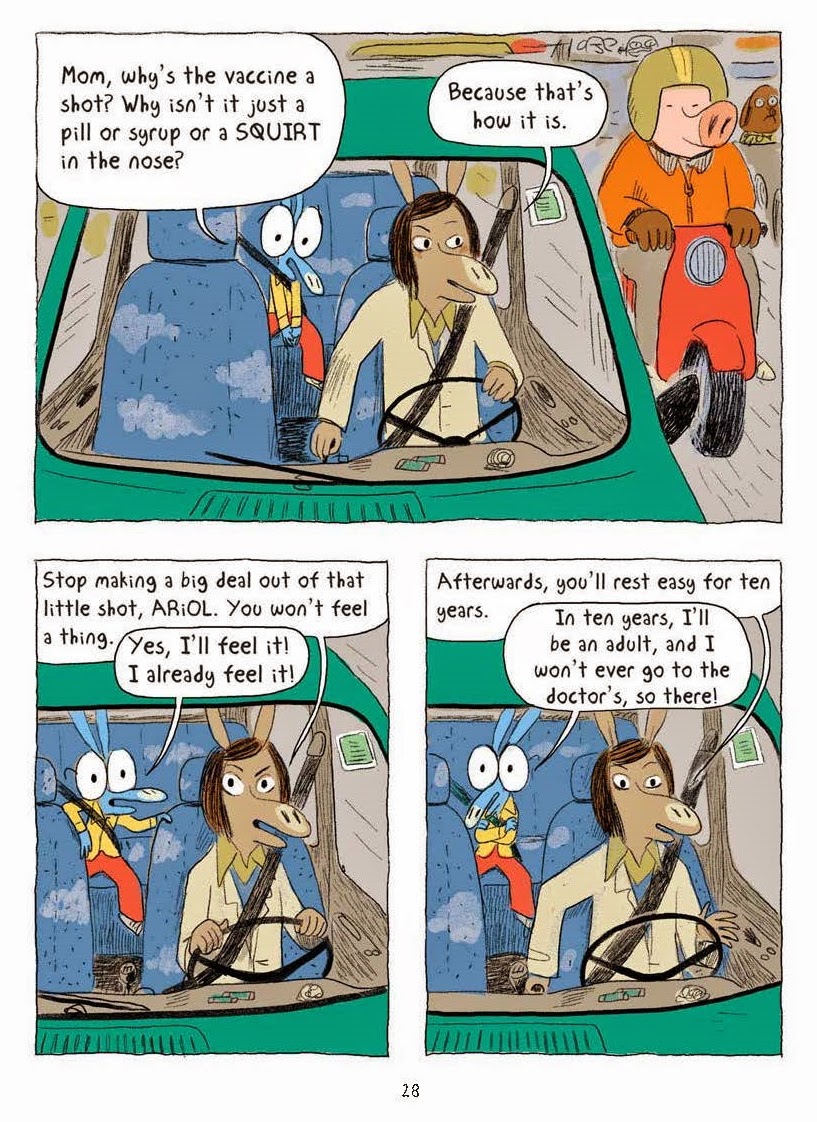 That approach fits with Guibert's previously stated 'I write for adults thinking about children and I write for children thinking about adults. I want to be clear, simple, and candid with the adults and subtle and engaging with children. It merely means providing them with all the truest things that life has taught us,' and I always think that's a hallmark for all-ages comics that are genuinely special, appreciable to both children and adults, although perhaps on different levels. Ariol originally began serialisation in 1999, the popularity of which led to the strips being collected and released as individual volumes, the fourth of which will be published in English later this month.

I know some people are put off by anthropomorphism (someone once asked me, very distressed, 'but why are they animals?!'), but I love it, and generally kids do, too- and are much more accepting of it- kids don't blink an eyelid at upright, clothed, talking donkeys. It's another way also of presenting differences, various family units and situations, without making it overtly political. While a number of anthropomorphic books focus on realism, rendering the characters as naturally as possible when blending human postures and frames to animal facets- like in Blacksad, for example, where Canales and Guarnido take the underlying characteristics of animals and emphasise them in both charcaterisation and visual depiction- Blacksad himself, a cat, a detective, wily, smart, always managing to get out of scrapes- that whole nine lives aspect, the faithful dogged nobility of an Alsatian translates into a police inspector, a young fox is a reporter looking to work his way up, and so on- all exquisitely painted by Guarnido.

The pleasure in Guibert and Boutavant's anthropomorphism is that the animals are given unexpected quirks and facets- personalities- which still fit in loosely with their animalistic associations: the duck is the laid-back, cool kid, surgically attached to his headphones, off in a world of his own, Bizzbella the fly is a nervous type, Petula the cow, lovely and a little stuck up. Those qualities are then blended with the inherent nature of children- curiosity, forthrightness, innocence and wonder, all of which Boutavant illustrates with clear, fine lines. 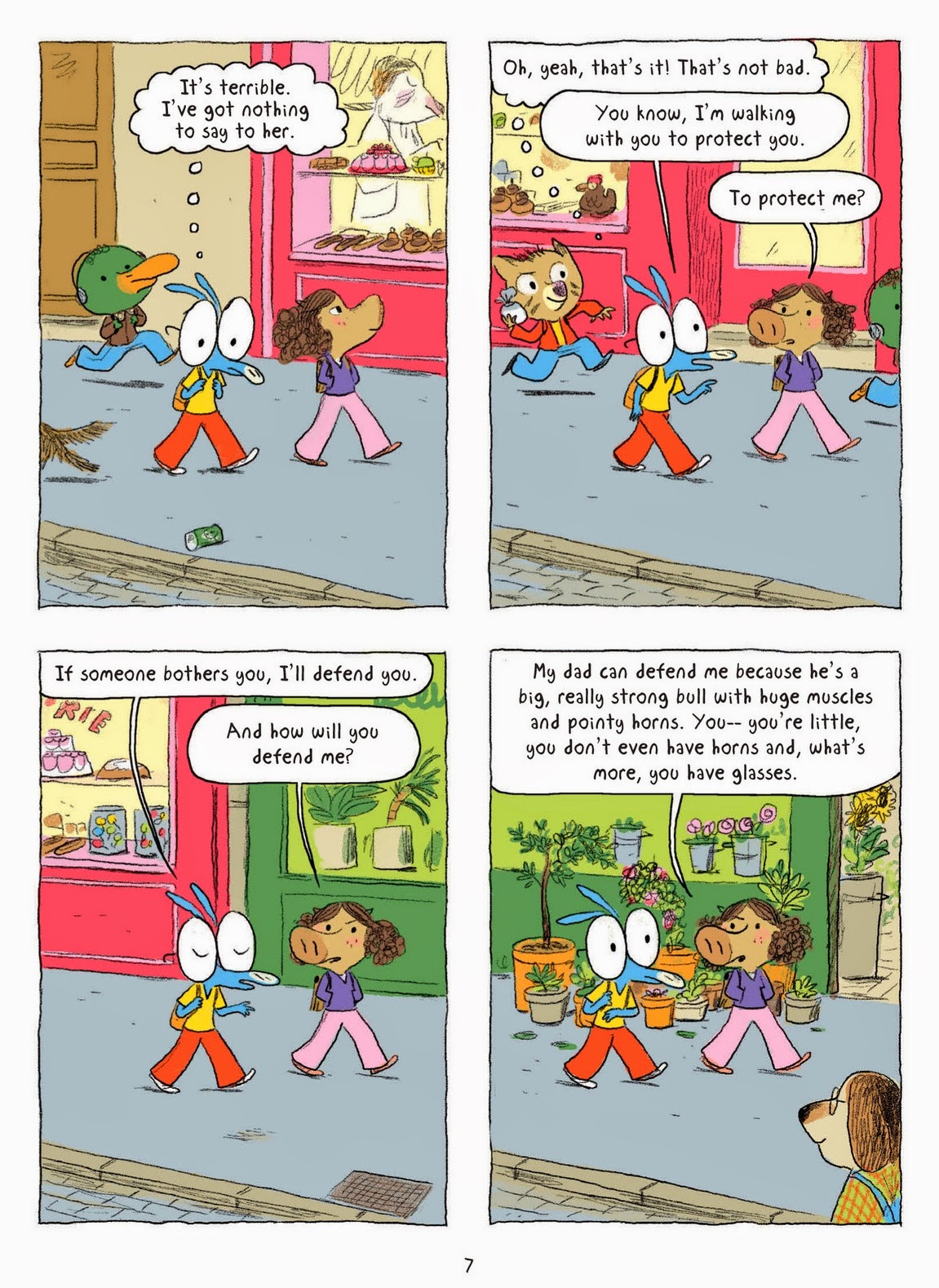 The books have a lovely design, too, a nice size to hold- slightly larger than A5, a bit more square (easily transportable to take and read, and as pedantic as it may sound, to hold) sturdy cardboard covers with french flaps, where all the characters and their names are listed along with little icons, making it easy to familairise (or re-familairise) yourself with the characters. Another aspect that I like about the Ariol books is that each volume contains roughly 12 individual stories- there's a contents page at the front- with individual stories flagged by a title page (see below)  with an illustrated mast-head, making it easy to dip in and out of, and clear to follow. The four panel pages are similarly simple to navigate, so even if you or your child have never read comics before, this is uncomplicated and a great way to ease in to the medium. Ariol is a fantastic series- gorgeously illustrated, intelligent, well-written ,with absolutely nothing to worry about in terms of content, and one that I, at 26 years old, enjoy immensely and which I'm confident children of all ages will love, too. 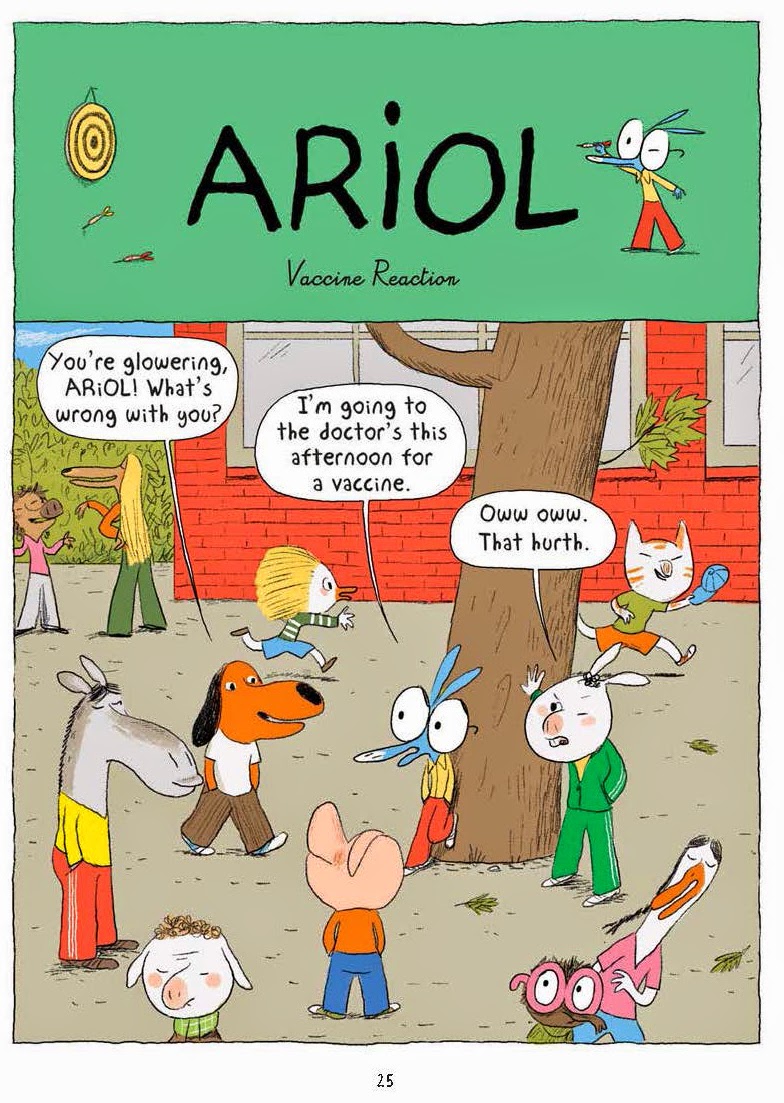 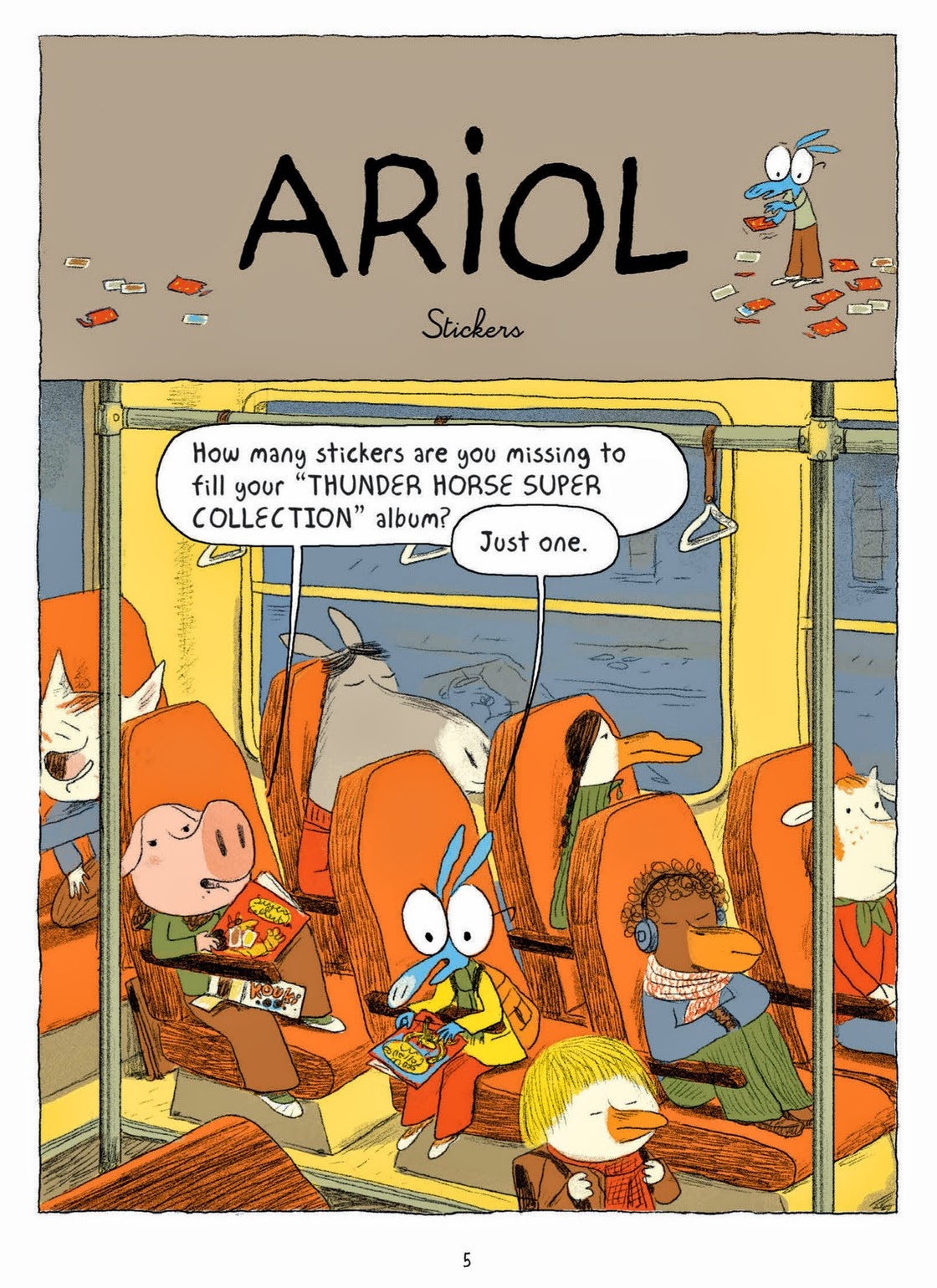 The comics were adapted into a French-Canadian production TV show in 2009, I've included some screenshots below, because I love the way they've retained Boutavant's characters and style and blended it with digitally produced backgrounds: 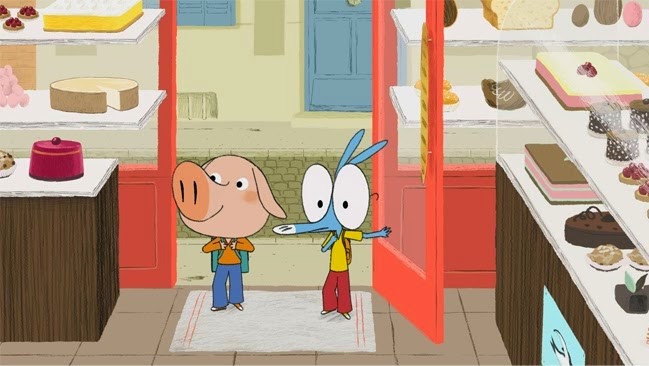 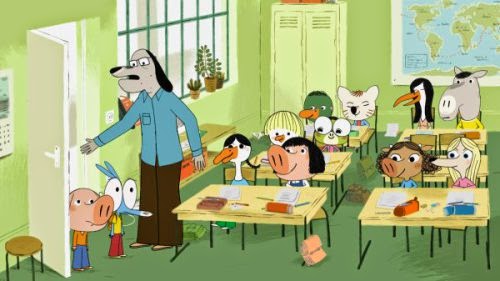 Here's one of the episodes I found on Youtube (this one's in English and about 4 minutes long)- it's pretty much a direct adaptation of 'The Videogame' from Ariol vol 3: Happy as a Pig, yet mysteriously re-named 'The Twiddle':

You can find the Ariol website (in French) here http://www.ariol.fr/
Posted by Zainab at 22:19