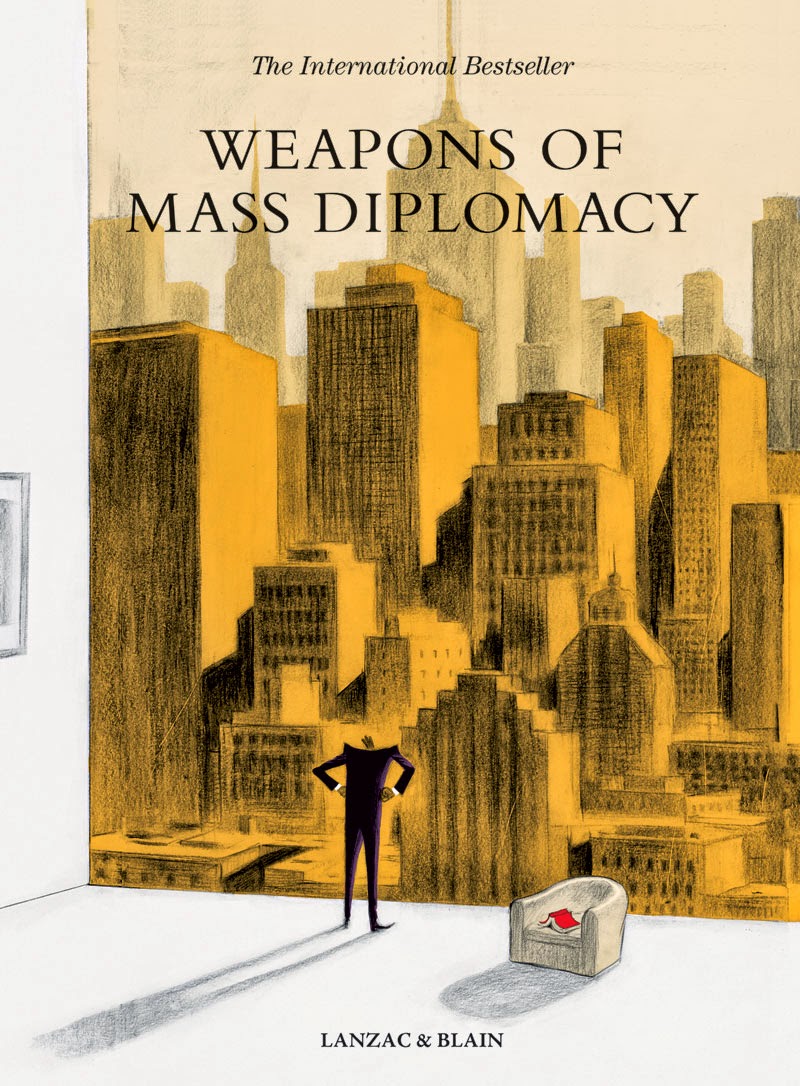 
Your enjoyment of Weapons of Mass Diplomacy, I suspect, will depend on how you view politics. It's co-written by Abel Lanzac- the pen name of Antonin Baudry, a diplomat currently 'Cultural Counselor of the Embassy of France to the United States,' who , from 2002-04, was speechwriter and adviser to French prime minister  Dominique de Villepin, working for the French Ministry of Foreign affairs on issues of culture and international economy. This quasi autobiographical book is based on the experiences of that time, in particular, the build up to the Iraq War.

I would argue that the Iraq War was a seismic, catalytic event in our relationship with politics- the need for transparency and accountability greater than ever, and marking an era denoted by disillusionment and distrust of politics and politicians. A reading of this book is probably coloured by your responses to various questions: what do we expect from politicians? Are they simply people doing a difficult job? Are they hugely privileged individuals in cushy positions of power, with little interest in the greater workings of their office? To what extent can they actually effect change? And so on.

Weapons opens with Arthur Vlaminck arriving the Ministry of Foreign Affairs for his appointment with the prime minister, Alexandre Taillard. Vlamnick's taken from one hushed room to the next, escorted by imposing security guards, nervously imagining himself flanked by storm troopers en route to Darth Vader, until- DOOM!- in bursts Taillard, pumping him by the hand, ushering him into his room, offering him wine, showing him passages from Marx. What follows is a bombardment of rhetoric, a rat-a-tat-ta: the world is a volcano about to erupt- on the brink of world war III- Taillard needs a team- a crack squad, first responders- the French Ministry is raft, but a raft with the cream of the crop, and so it continues. Before he knows it, Vlamnick's at home telling his girlfriend how he's been recruited for The Word. 'Of God?' she asks. 'No! Y'know... words! Words are... They're what must be said. A minister must choose his words wisely... Actually, I'll get the full details tomorrow.' 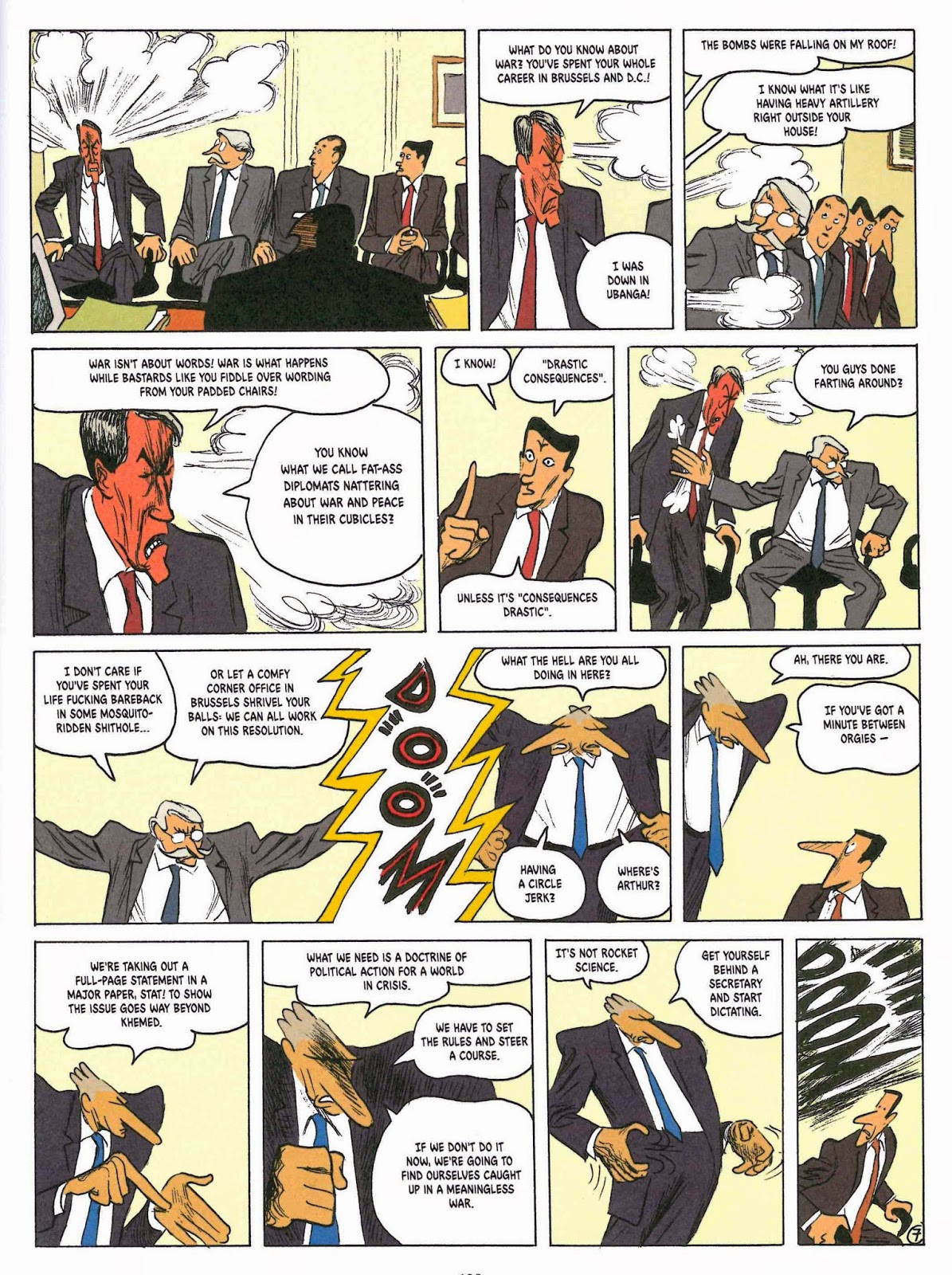 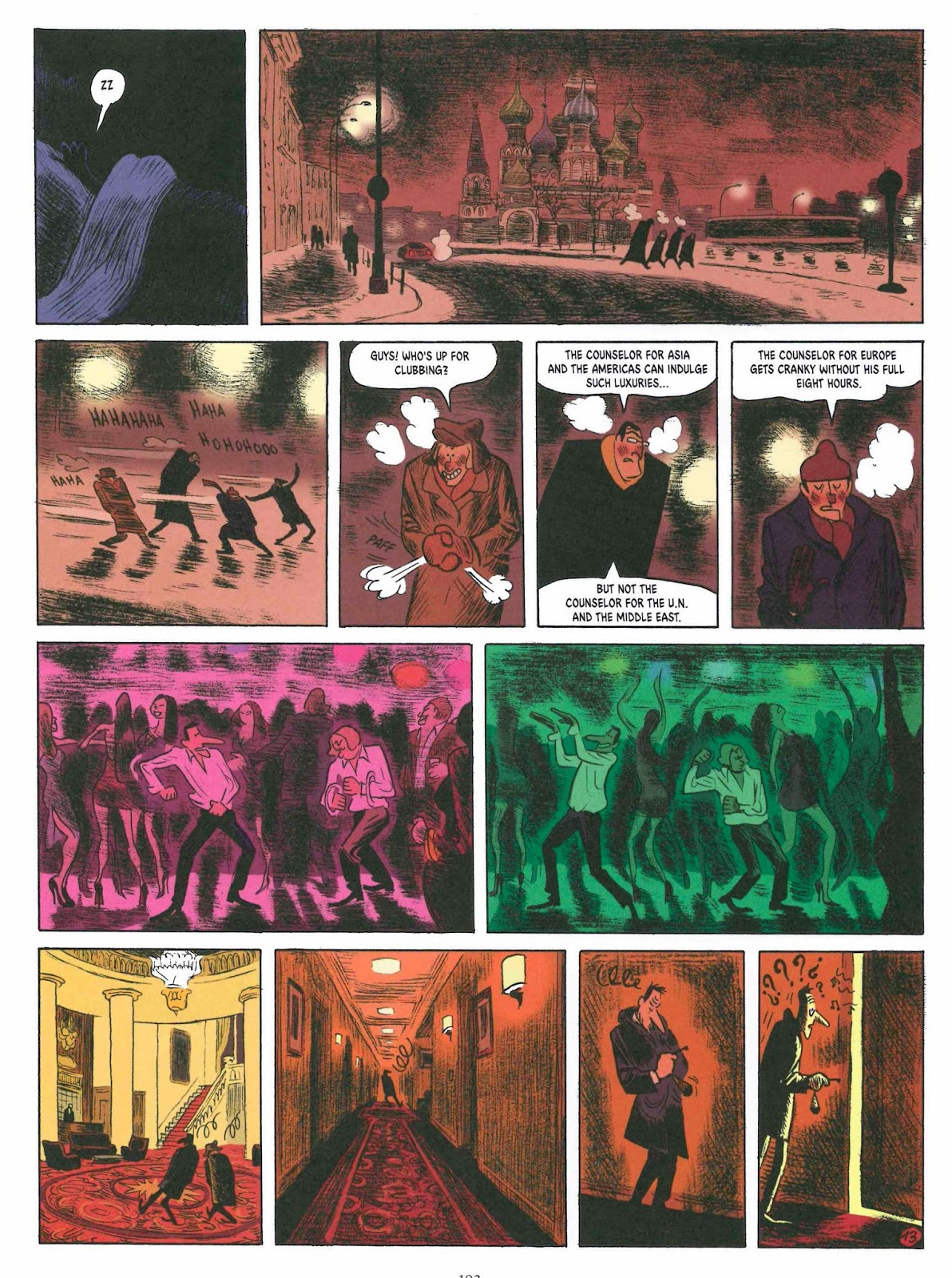 And with that, the reader is thrown in with Vlamnick as he starts his new job, writing speeches, meeting the other key workers and advisers in the ministry, learning who to trust and who not to, travelling to international summits and conventions, re-writing speeches, navigating office politics. As much as we'd like to imagine the people and offices in charge of the running of our countries, as efficient, hard-working, noble, above the pettiness of everyday concerns, politics as portrayed here is like any other job -a ton of paper pushing, form filling, lip service, poor inter-departmental communication, rivalries and one-up-manship. But Weapons is a curious book, in that it's protagonist is not Vlamnick, but Taillard. Taillard, whose politics lean right, but is presented here as an astute, forward thinking genius, whose charismatic, overpowering personality is half cultivated, half natural- the bluster a smokescreen for an incredibly keen and sharp mind,  a misdirection almost, as he attempts to navigate his peers in order to line up dominoes for the larger vision which he sees and believes.

It's Taillard who is the heart and life of the book, Taillard to whom Blain lends all his dramatic movements and flourishes- flagging every appearance with a sudden DOOM! DOOM! and here comes Taillard swishing, swooshing, spirals in his wake, motion, motion, motion, so many lines. The satirical element is, I'm guessing, supposed to be the audience laughing at Taillard's ridiculousness, his quirks and eccentricity, the ineptitude of the vastly paid people in his office who seem more interested in navigating their career upwards than actually doing their job. 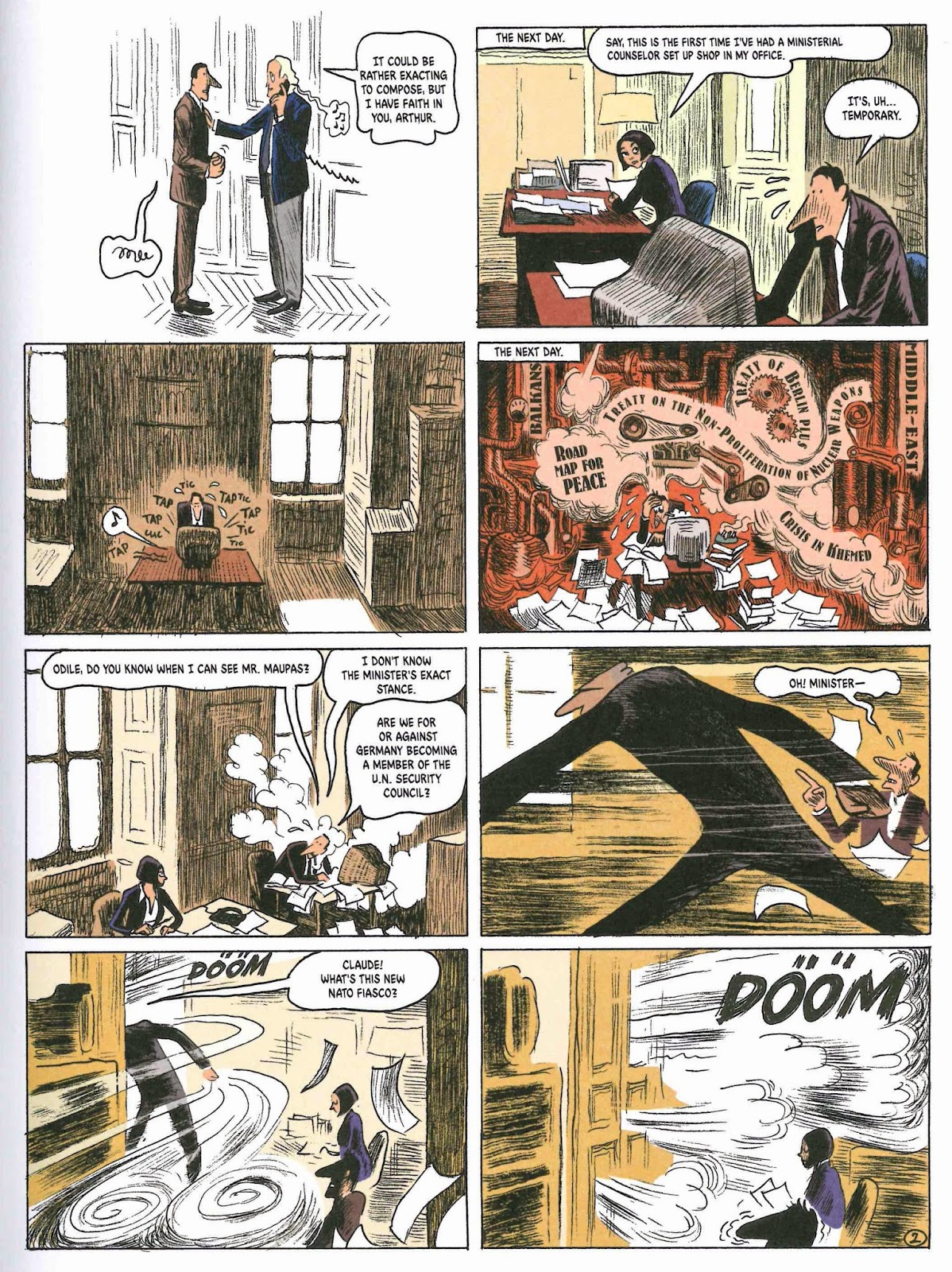 But it doesn't really work. The emphasis on Tailliard as a misunderstood genius type is too pronounced- there's admiration and even reverence, while the people are all ostensibly 'good' doing the best they can, rendering the purported satire toothless. It ends with a rousing speech by Taillard just before the Iraq invasion takes place; with the idea of 'we were right/you should have listened' hanging obtrusively. Nor does it function as a vehicle for the journey of an ordinary man in extraordinary circumstances- the fish out of water. After a brilliant opening passage, where Vlamnick is given his first speech to write, we hardly get to see much of our speechwriter every-man. He's present, of course, but events are focused on Taillard, and the few forays into his personal life with his girlfriend fall flat (she leaves him at one point, but then they are inexplicably back together). He's too thin a foil, his story too slight; if you were to pick this up and attempt to read it as the story of a man who gets a job in political office, and the journey that follows- it would't work.

And so it rafts in a rudderless middle-ground - neither sharp or incisive enough regarding politics or people, nor empathetic towards any one person. What makes it worthwhile, however, is Blain's illustration, which is always a pleasure to see, and he does his utmost to imbibe the text with the life and edge it's lacking. Take a look at the  beauty of this lone splash page, for example: 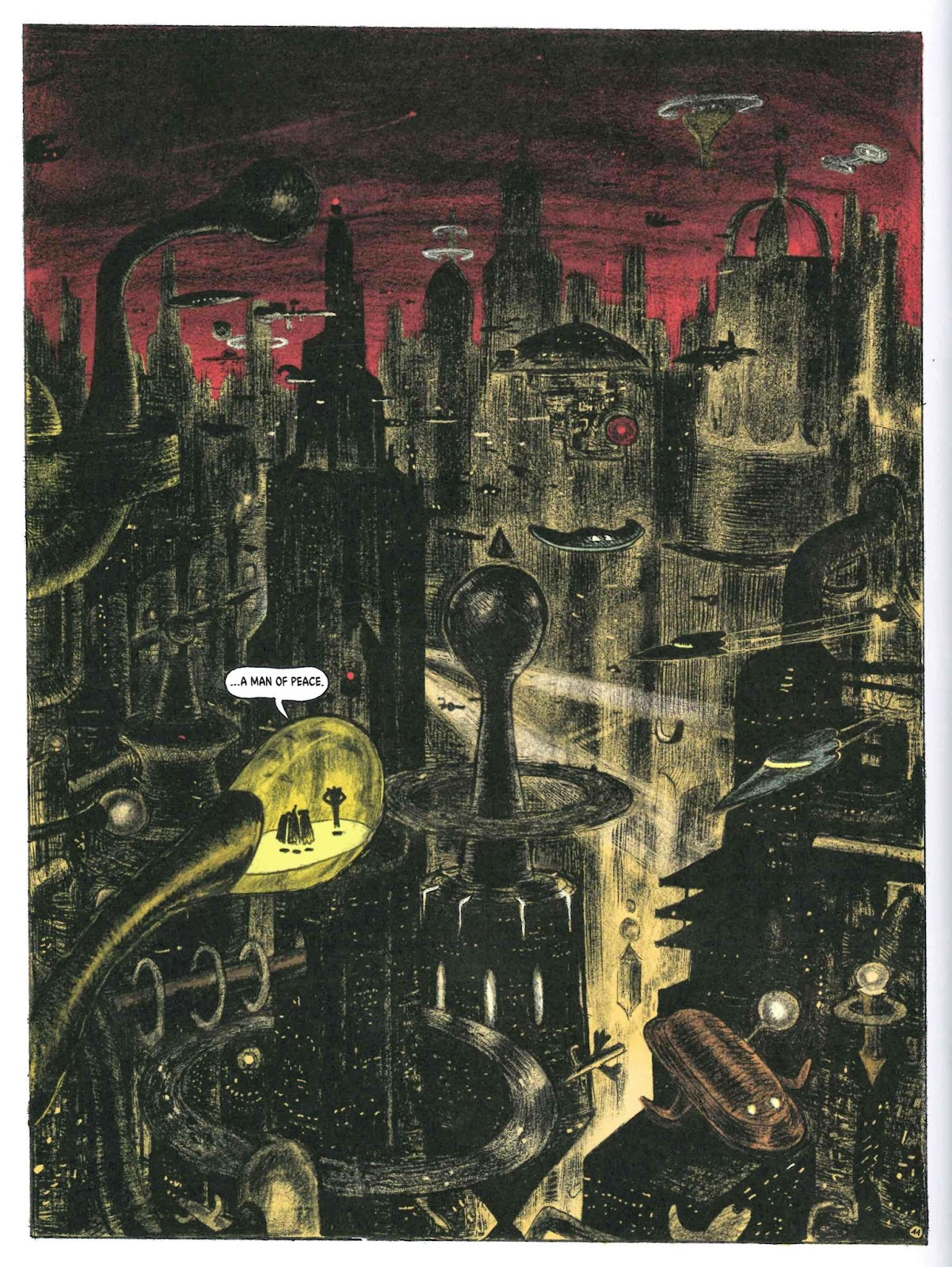 That comes by way of a Taillard dream- merging a cartoon and his own fantasies, that highlights the collaborative nature of Weapons- that's a very Blain touch. So too, is the running gag of Taillard as Darth Vader: 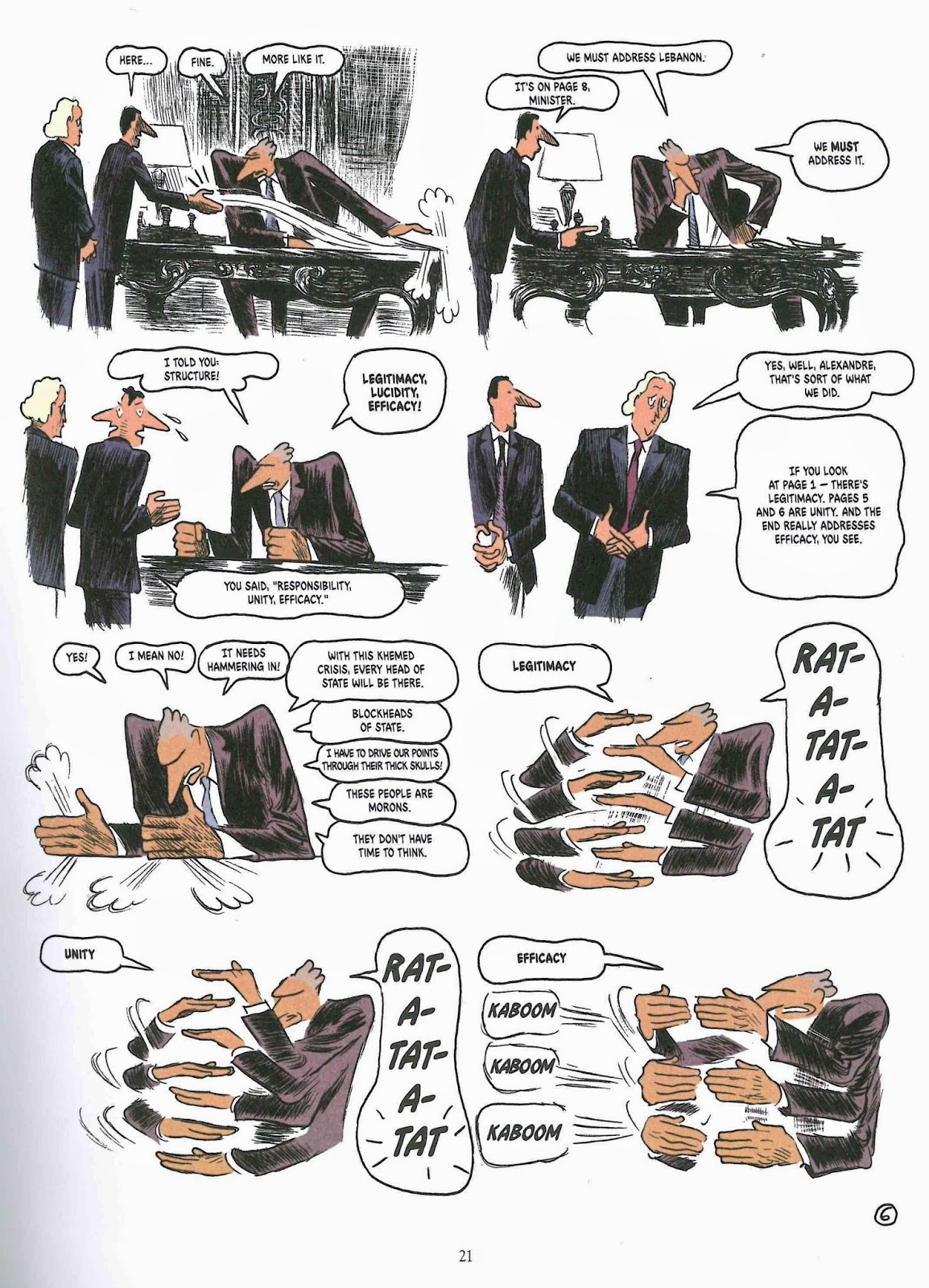 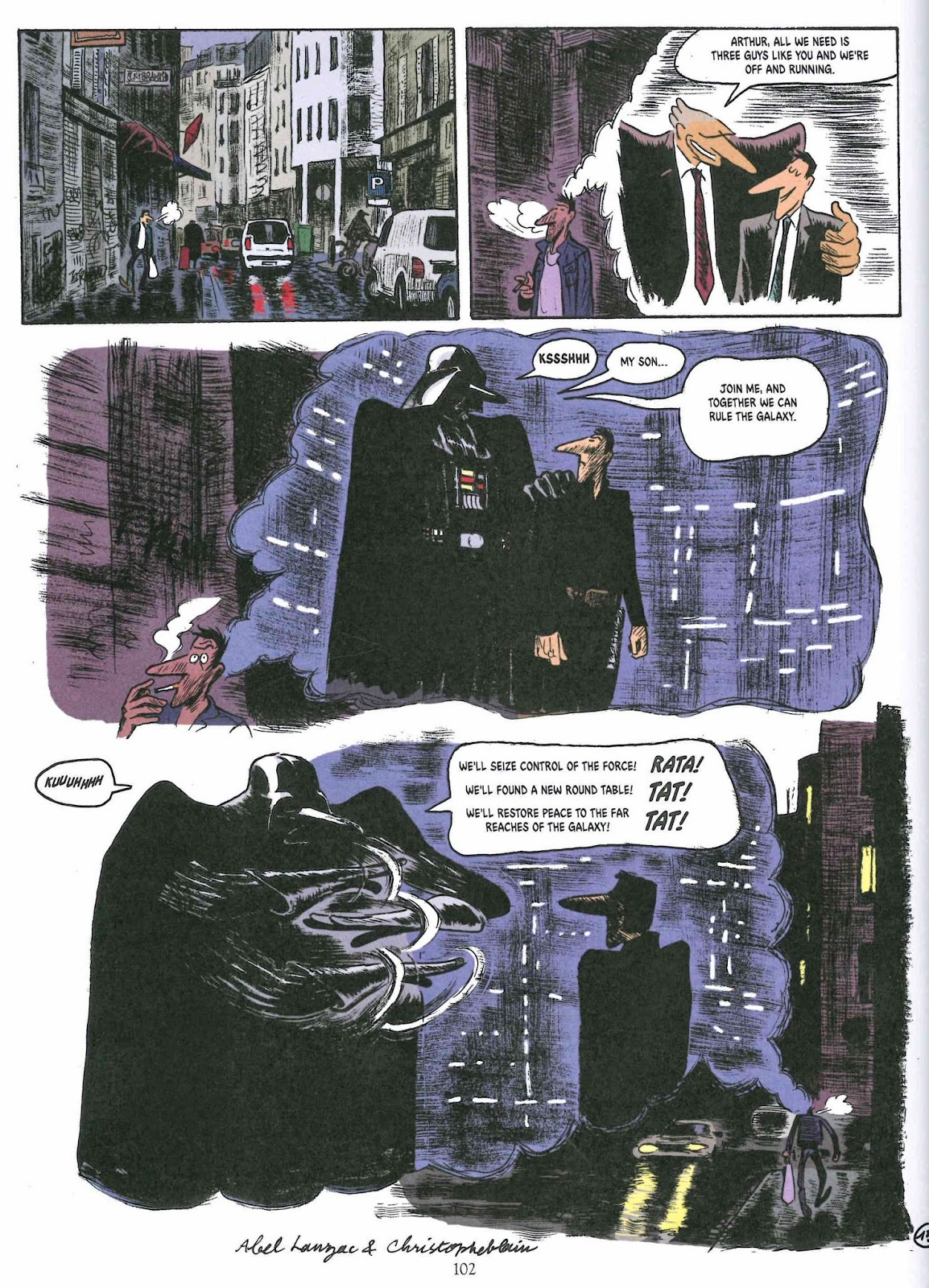 The white backgrounds Blain employs here, used to tonal effectiveness in In the Kitchen, don't fare as well. The expanse of white space punctuated only by talking busts of people, cramming word balloons everywhere are remarkably flat- conveying little but boredom. I'm sure it's done when there's more words to be fitted on the page, removing background to free up space, because it doesn't mark a shift in tone or emphasis. Blain's legendary expressiveness and dynamic movement is on display; he uses a lot of clouds in this one- bid clouds, little, mini clouds- of frustrations, of perspiration, nervousness, effort, concentration, it's a great little thing to see- the universal application of the common cloud. His fondness for visualising sound through colouring , lettering and sfx makes an appearance too, when the French delegation suffers a spot of turbulence to their aircraft: 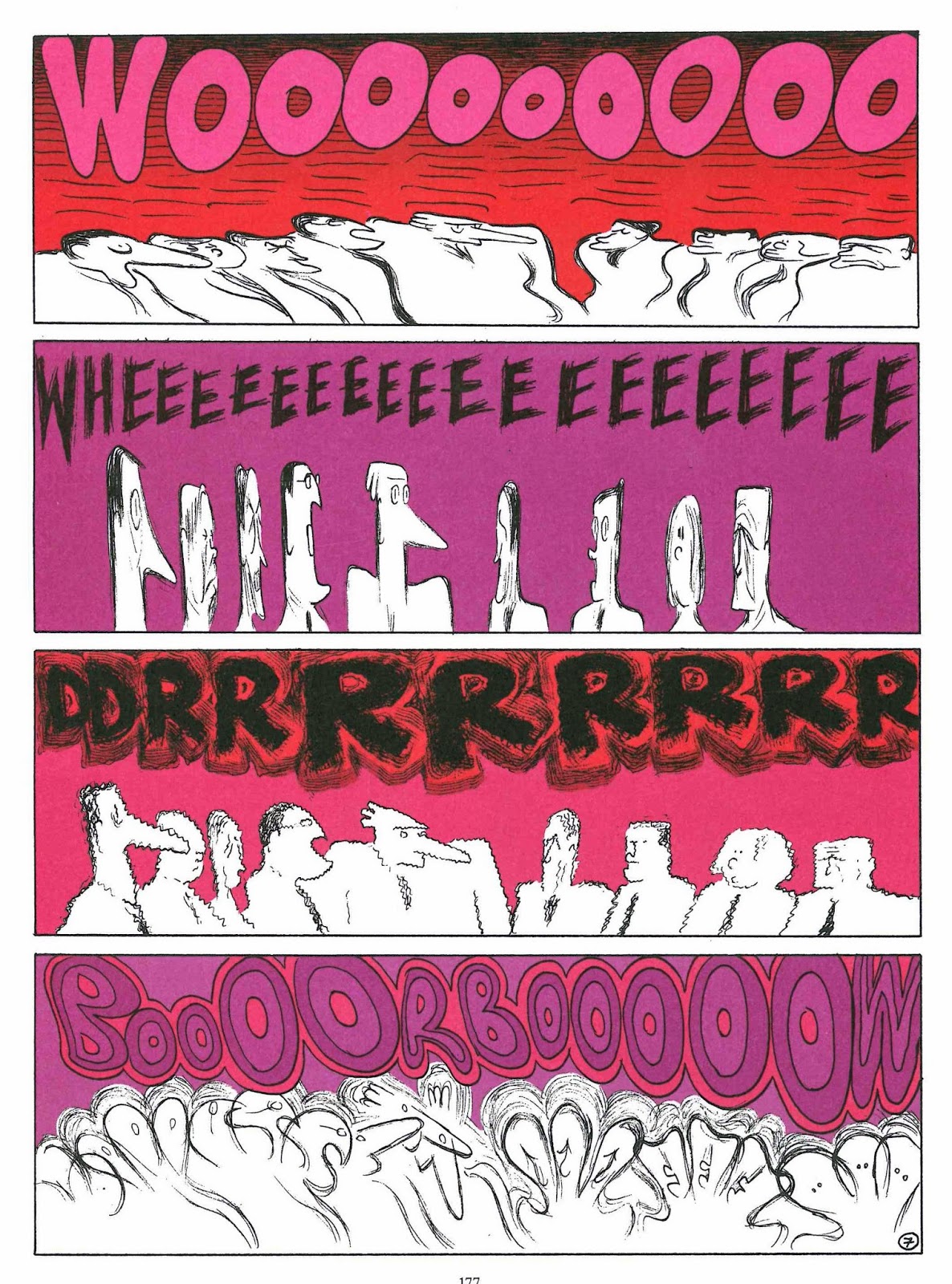 I can't imagine anyone depicted within the pages of Weapons of Mass Diplomacy being even mildly offended by it- it's a book that they'd laugh at together, in its gentle caricatures. I wrote the other day of effective satire coming from a position of where you stand a little apart from the thing which you're taking jabs at, and I think this suffers from Lanzac's affection for the subject, and also, as someone who continues to be employed by the French government, his refusal to go full throttle. As a fan of Blain, I relish any opportunity to see his work, and as much as it elevates what is here, even he can't quite save this from stodginess and a whiff of self-righteousness.
Posted by Zainab at 01:08