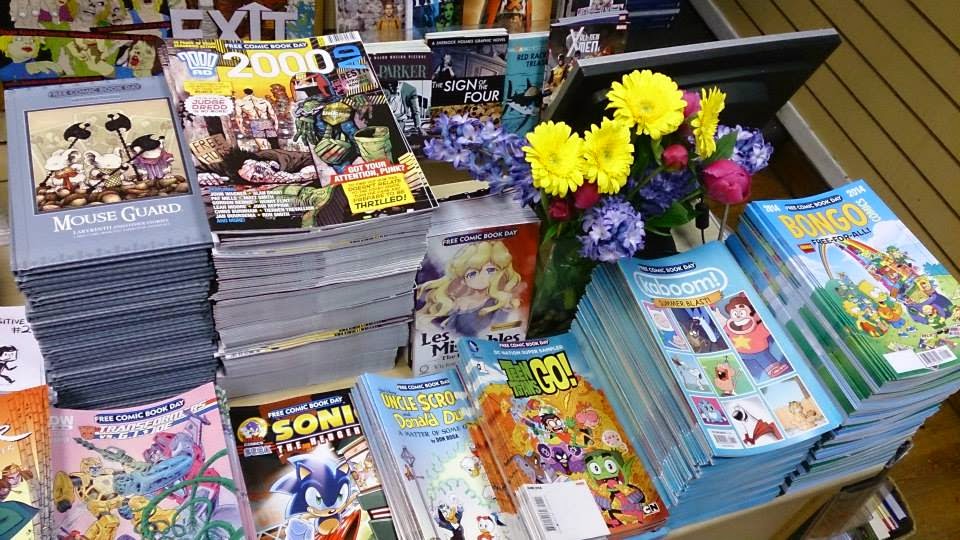 As you probably know, it was Free Comic Book Day this Saturday gone (for the uninitiated, FCBD is a wordlwide event which takes place annually on the first Saturday of May, with  participating publishers producing special free comics for comic retailers to distribute). I thought I'd write a little about my experience, because to be frank, I've never been frankly that invested in it before. As a customer, I've taken part in 2 FCBD's- by which I mean specifically visiting a comic book store to get my free comics; I've always considered it a positive initiative in an offhand manner- free comics for all, publishers supporting comic retailers, but that's been the extent of it- I've never really been super keen to get my hands on any particular title.

This year was different in that I was on the opposite end of the deal, somewhat- working in a comic book shop, which I'd been assured by various people was the summit of comic retail hell, but for some reason (my birthday- the reason was my birthday) I was looking forward to it. I'm always cheery on my birthday- nobody is happier that I'm alive than I am. Jared had asked me if I wanted to work it, and I'd said yes, and yes to being 'on the door.' The shop is pretty small- despite having two floors- so it was essentially my job to act as bouncer and let in as much people I thought the guys could handle without being inundated, and without the customers feeling they were getting a cramped shopping experience. I knew people would be queuing up early (I'd been told one year we had campers!), but we open at 9, and when I got in at around 8:30 in my new sparkly summer sandals, it already looked like this: 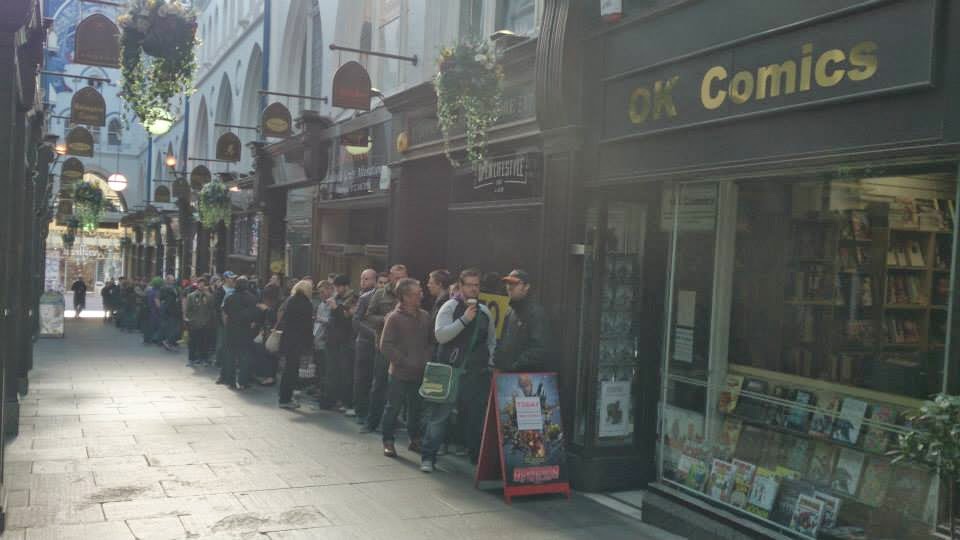 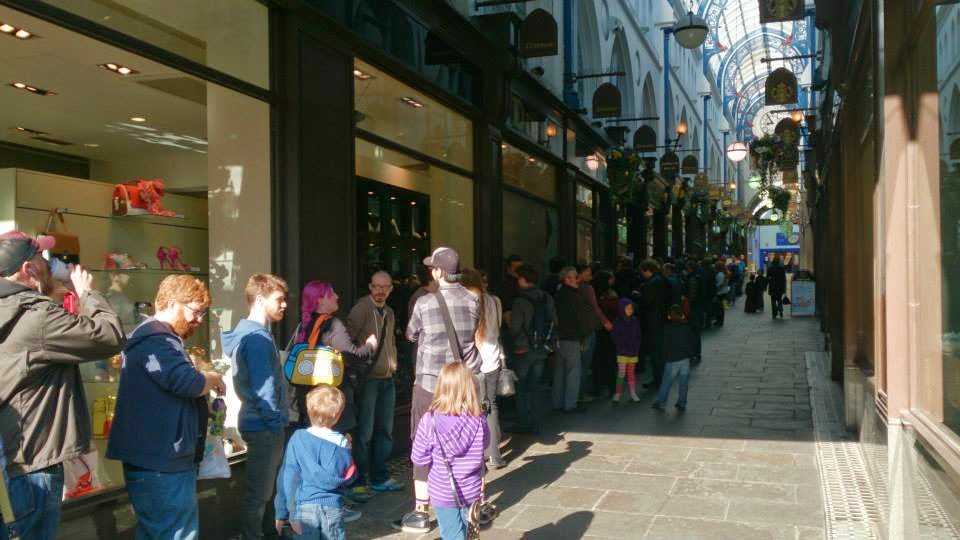 The picture above is the end of the queue- as you can see the shop's located inside an arcade- the queue here is so long you can't see the shop front at all, and from the sunlight hitting, you can tell it's now also trailing out of the arcade (there's a slightly better panorama picture here). I got in- and the guys had given in to my shameless demands and bought me BALLOONS- all was going well. I was happy. I could have gone home then and it would have been a day well done. But there were people who wanted comics, and I was now in a good enough mood to help them.

9 o clock hit and all men to their stations. I generally only work at the shop on Tuesdays- one day a week (I work in a college library as my main job)- so it was really nice to see and meet and chat to so many of our customers. Jared had tweeted about it being my birthday, and complete strangers were wishing me happy birthday, which was lovely. People talk about comics sense of community, and while I've experienced that at cons, online and through the friends I've made, this was a different vibe- as trite as that may sound- everybody happy and upbeat, united by a common passion- there was a tangible buzz to proceedings helped along by a rare occasion of good weather. It was really heartening to see lots of families come in together, parents, grandparents and siblings, and a lot of very curious people passing by stopping to ask what was going on and then explaining the concept to them. I wasn't expecting it to be quite so cold (hence the hopeful sandals, thank you, pretty lady for saying they were great- you made it worthwhile), but the arcade is obviously covered and shaded, and after 4 hours I was getting freezing, so grabbed an extra layer. Some of our awesome customers noticed and offered to buy me a hot drink, but alas I am a strange beast who does not drink hot drinks (the offer left a warm glow, though).

These guys were great: a couple of dads who'd hastily put their costumes on whilst on the bus, and their cute kids- it's cool that they can share that together and make an event out of it: 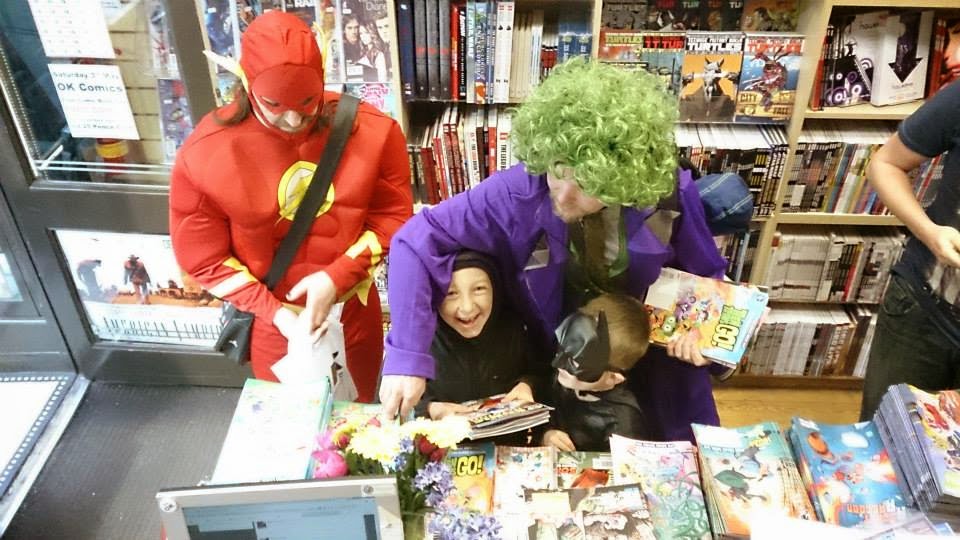 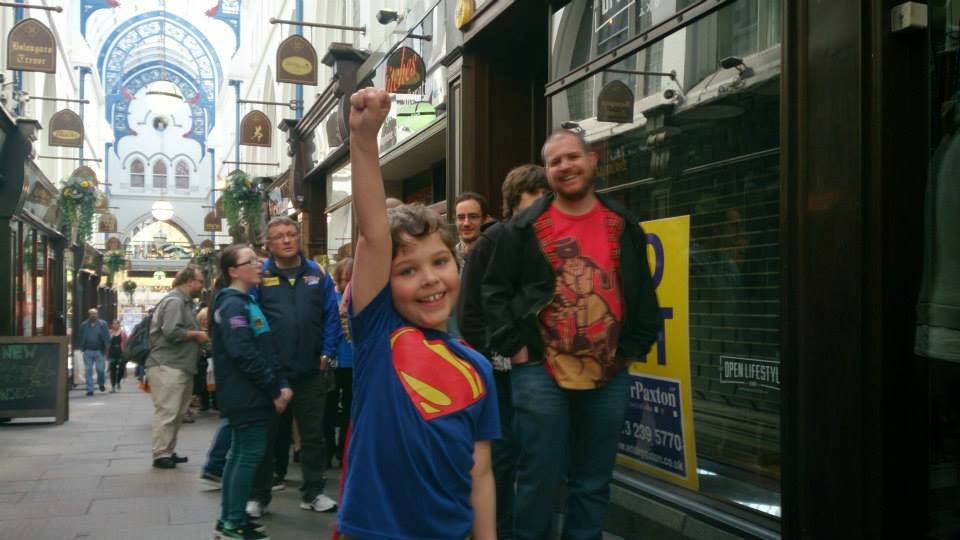 Without doubt, the cutest, and best, Robin costume I've seen to date: 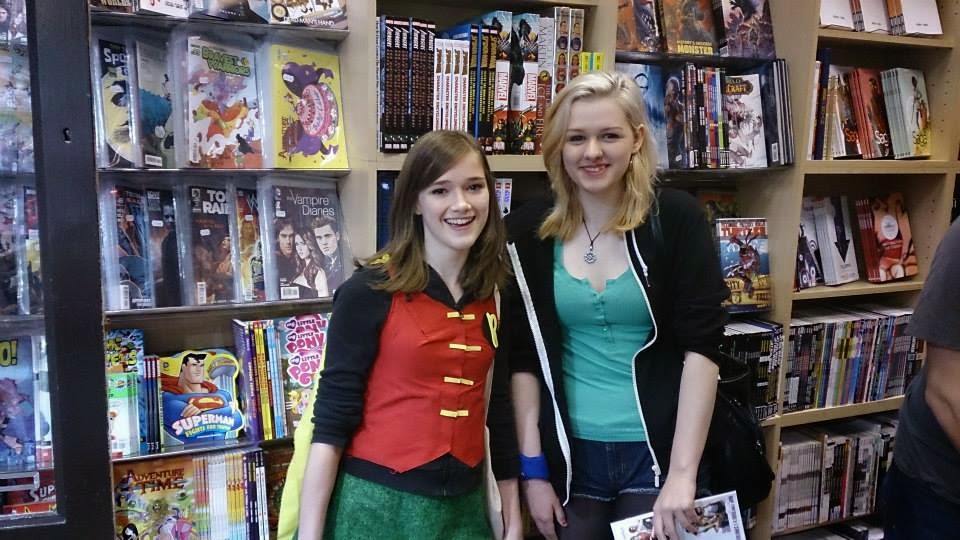 'Right. There's 3 ginger-bearded guys at the end of the line,' Jared told me at about half past eleven. 'One's got a short beard, one slightly longer, and the other longer still. When they get to the front, you'll know that's where the end of the queue was.' Here are the lovely gents in question: 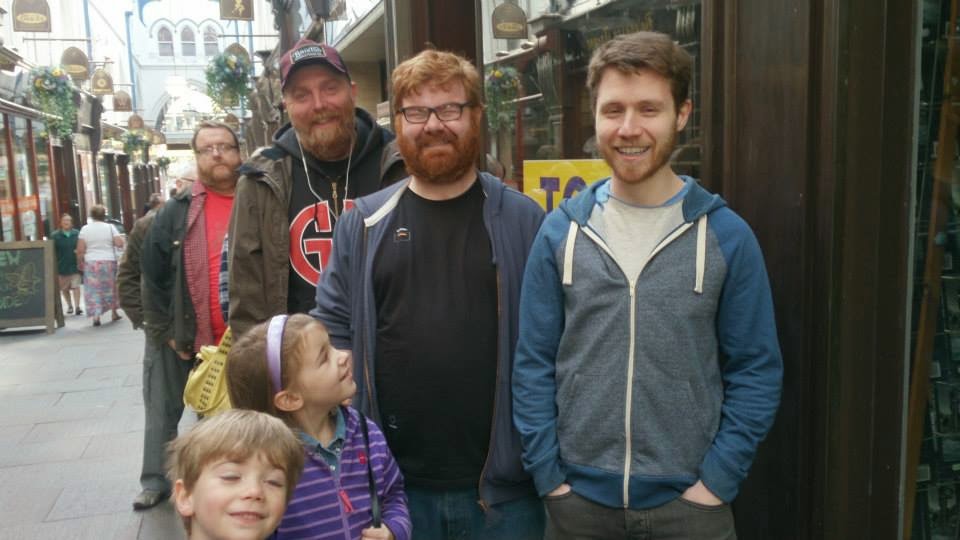 Oliver and Sam (in the green Hawaiian shirt in the corner) doing all the hard work- you can see me chatting away outside: 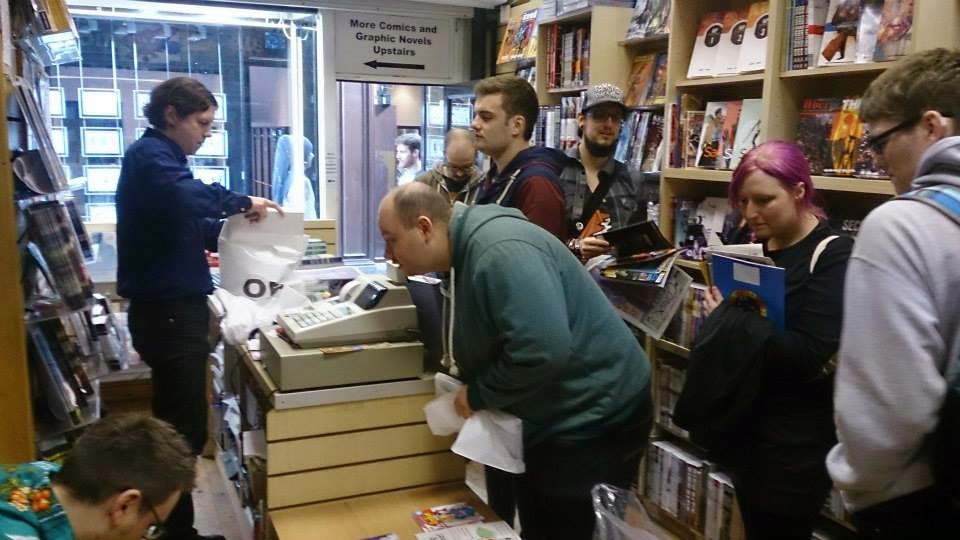 Being on the door was just management, really- we had a massive 25p back issue sale on at the same time on the upstairs floor, so it was a matter of keeping an eye on how many people are currently on the ground floor, but also on the security monitor (which luckily I could see from the door) so I didn't end up sending 10 people in, only to have a group descend from upstairs- maintaining a watchful balance. The ease of it was helped by the fact that we had no complaining, no bad behaviour or rudeness, with everybody happy to wait their turn patiently. The queue lasted until about quarter to 2, at which point all the free comics had long gone, and there was less of a rush, so I could come off the door. Helen (to whom I have now pledged my undying love) from Hepworth's cafe next door to us bought me birthday cupcakes:

We closed up at 6 as normal and went out to dinner and ice-cream (balloons in tow) rather tiredly, but good tired. A little girl (Ruby) I think, had her daddy ask me if it was a bit rubbish working on my birthday, but it wasn't at all- it was pretty damn great. I expect the newness of the experience contributed to that, but it was what it was: a good time. And hey, I even managed to get a few comics out of it! From what I've read and heard, Tom Scioli's Transformers/GI Joe seemed to be the one to get, and it looks amazing- that guy can really draw. I liked 2000AD's offering- the Chris Burnham illustrated Dredd strip alone was worth it, and I always enjoy Kaboom/Boom comics. Didn't realise Archaia were  putting out another hardback this year, as well- that was a nice surprise. Not read all of these yet. but I will. I will. 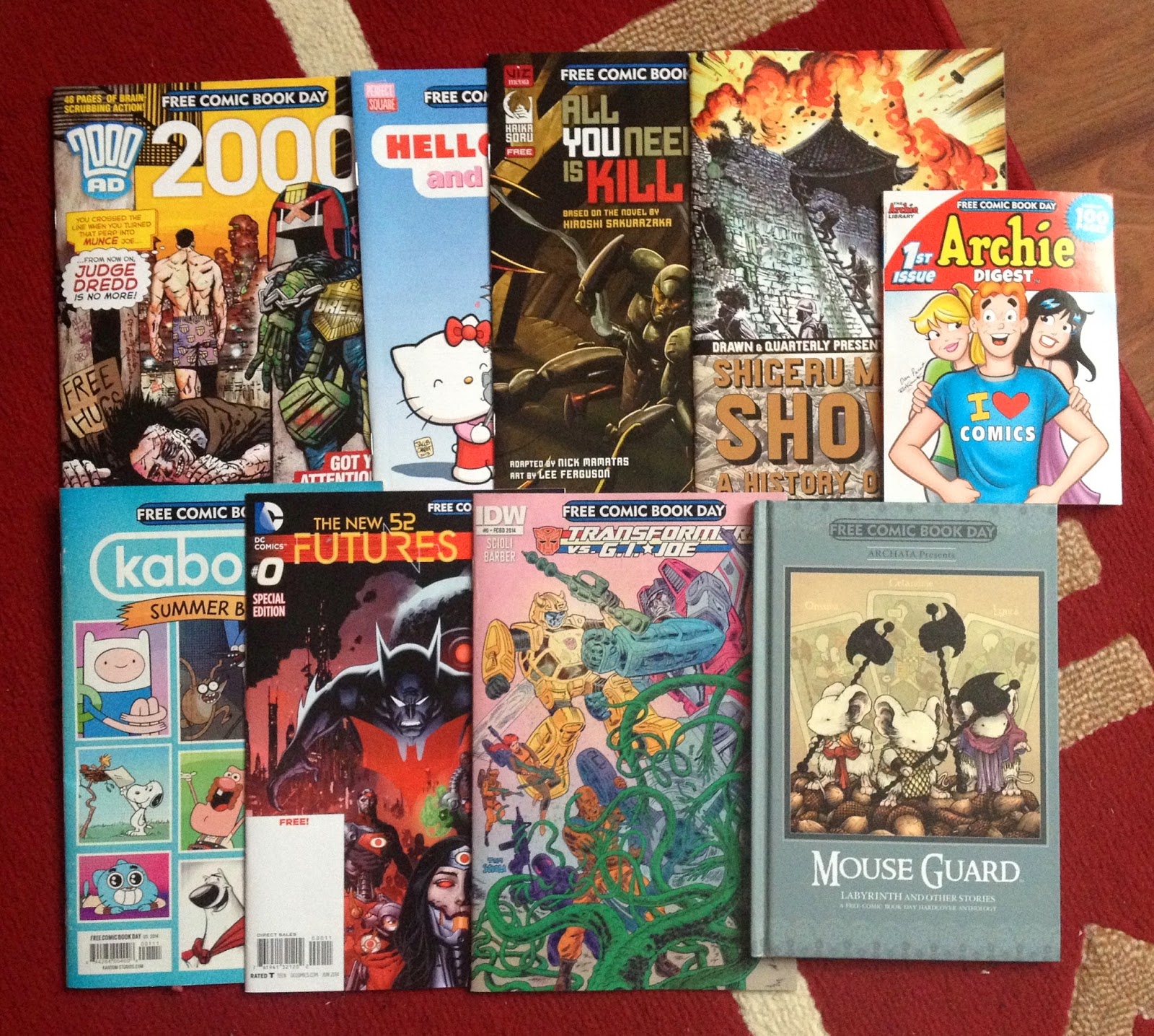 All photographs (apart from the final one) courtesy of the OK Comics Facebook page.