Alone: The Vanishing: living the dream 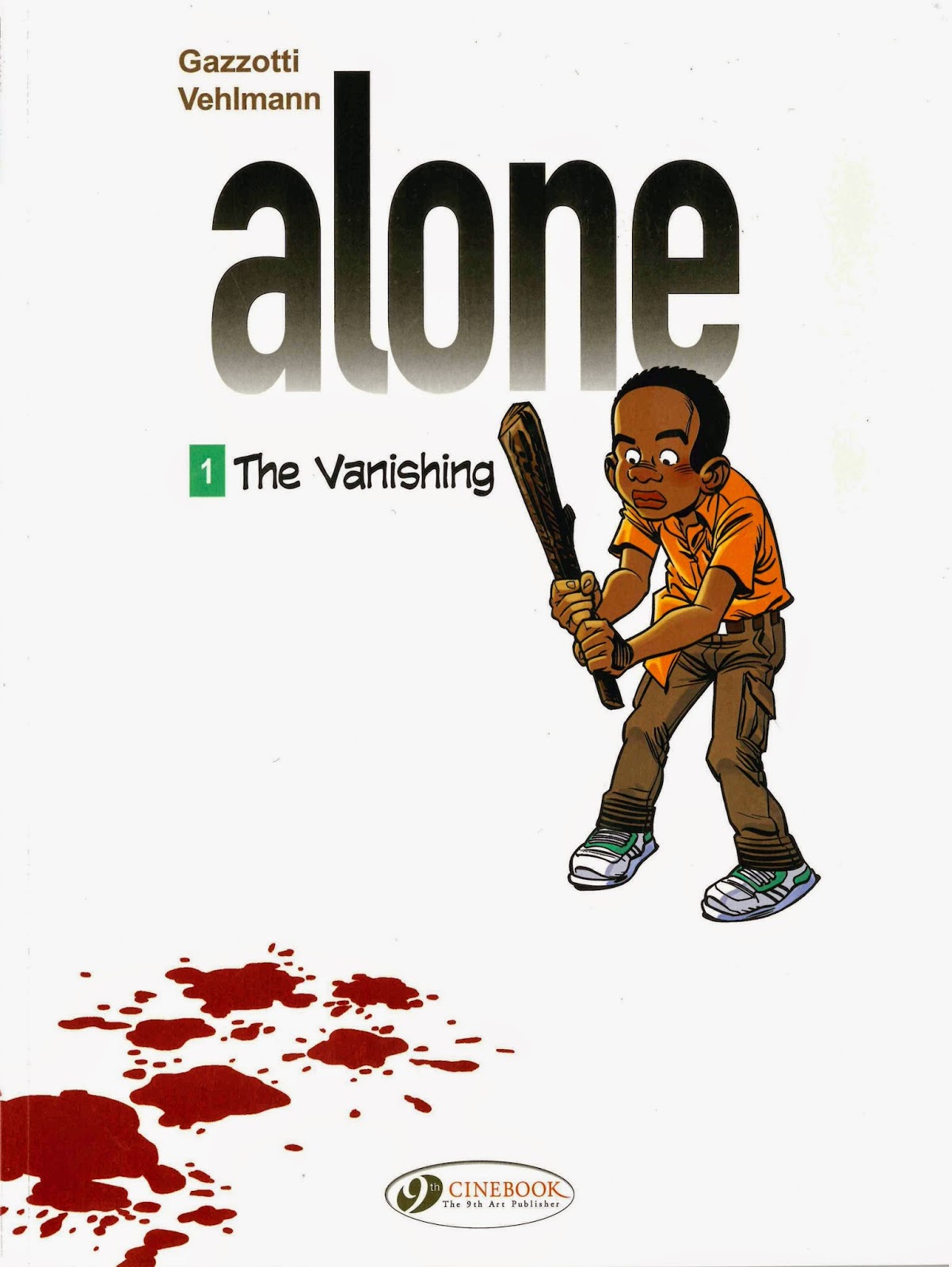 Alone: The Vanishing by Bruno Gazzotti and Fabien Vhelmann, published by Cinebook

Into it's eighth volume in its native France, Bruno Gazzotti and Fabien Vehlmann's popular and acclaimed series 'Seuls' (only), this week saw the release of the first book in English. Re-titled 'Alone,' volume one, The Vanishing, is a brilliant and distinct start,  setting a strong standard for the upcoming installments.

The Vanishing opens with an omniscient narration that introduces us to our 5 main characters; here is Ivan as he turns from school to a house devoid of busy but absent parents and sets himself in front of the TV with some snacks. Here's Leila- smart and stubborn as she and her dad argue over the best way to improve the scientific invention she's building, while her mom and sister look on in exaspertaed affection from inside the house. A pig-tailed  Camille studies hard into the night in the flat she shares with her father, as little Terry fights with his mum to stay up and watch a film. And finally we meet Dodzi, enduring his first day at boarding school/care home, receiving the new boy treatment as he's beaten up for his trainers. This is the prologue, this is life before the event.

And then it's tomorrow and everything has changed. The five children wake up to find everybody gone- not just the adults, but all the other children too- babies, teens, everybody. Apart from them, it would seem. Wandering tentatively into the streets to determine what's happened, they slowly cross paths and band together- nervous, scared, but rapidly making adjustments as they assess their situation. They're all smart kids, floating numerous theories ranging from the possible to the outrageous- 'We're the ones that are dead, and we're actually in hell now!'- that would possibly explain the disturbing phenomenon; Vehlmann and Gazzotti, however, avoid giving them set roles to fill- 'the smart one,' the athletic one,' 'the nerd,' instead making each one intelligent in individual ways that suit their personality.  It's Dodzi the other four naturally look to, though, to lead and make decisions; Dodzi, who is used to looking out for himself after being in care homes, resourceful, alert and more familiar with isolation than the rest. 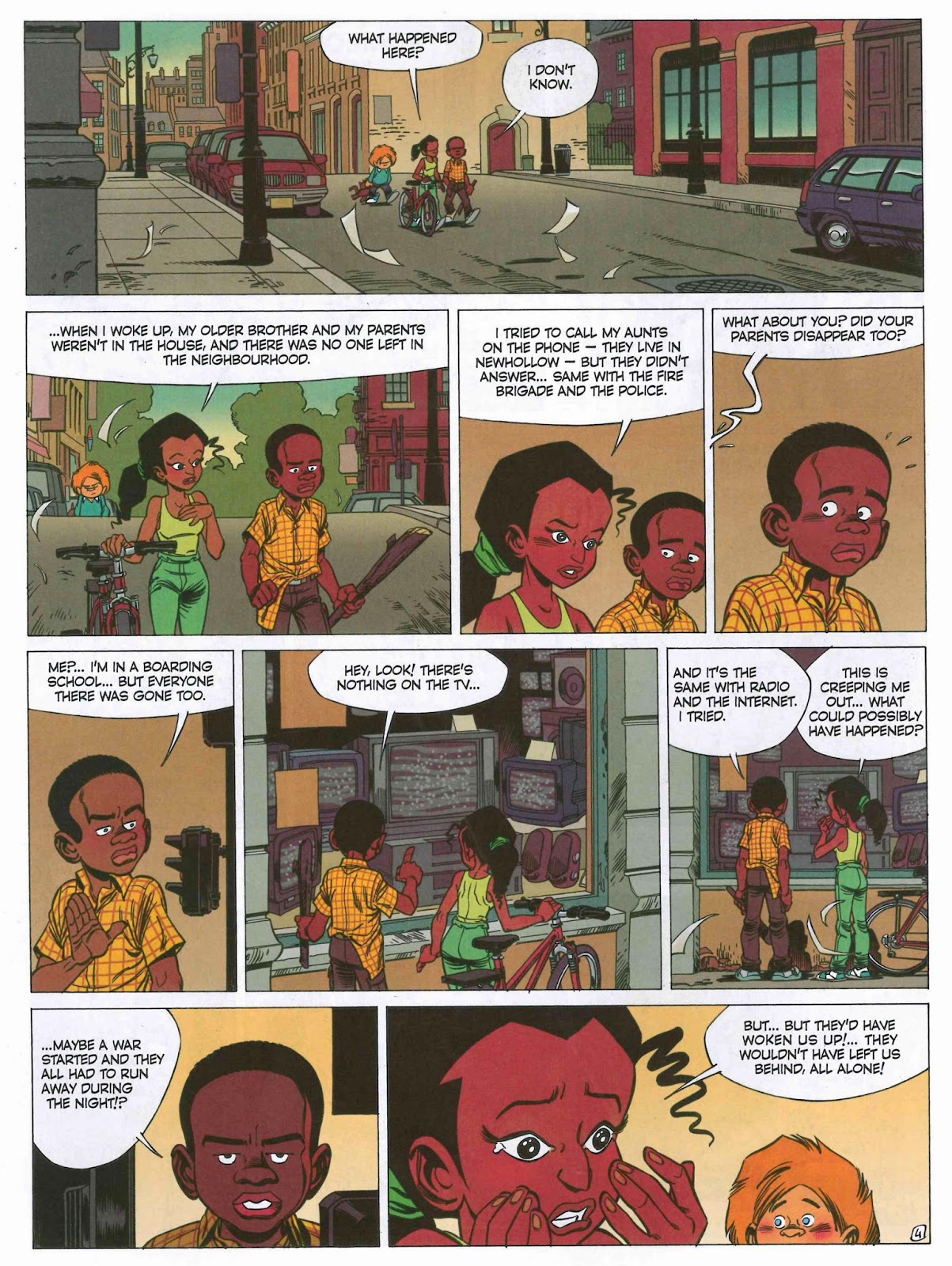 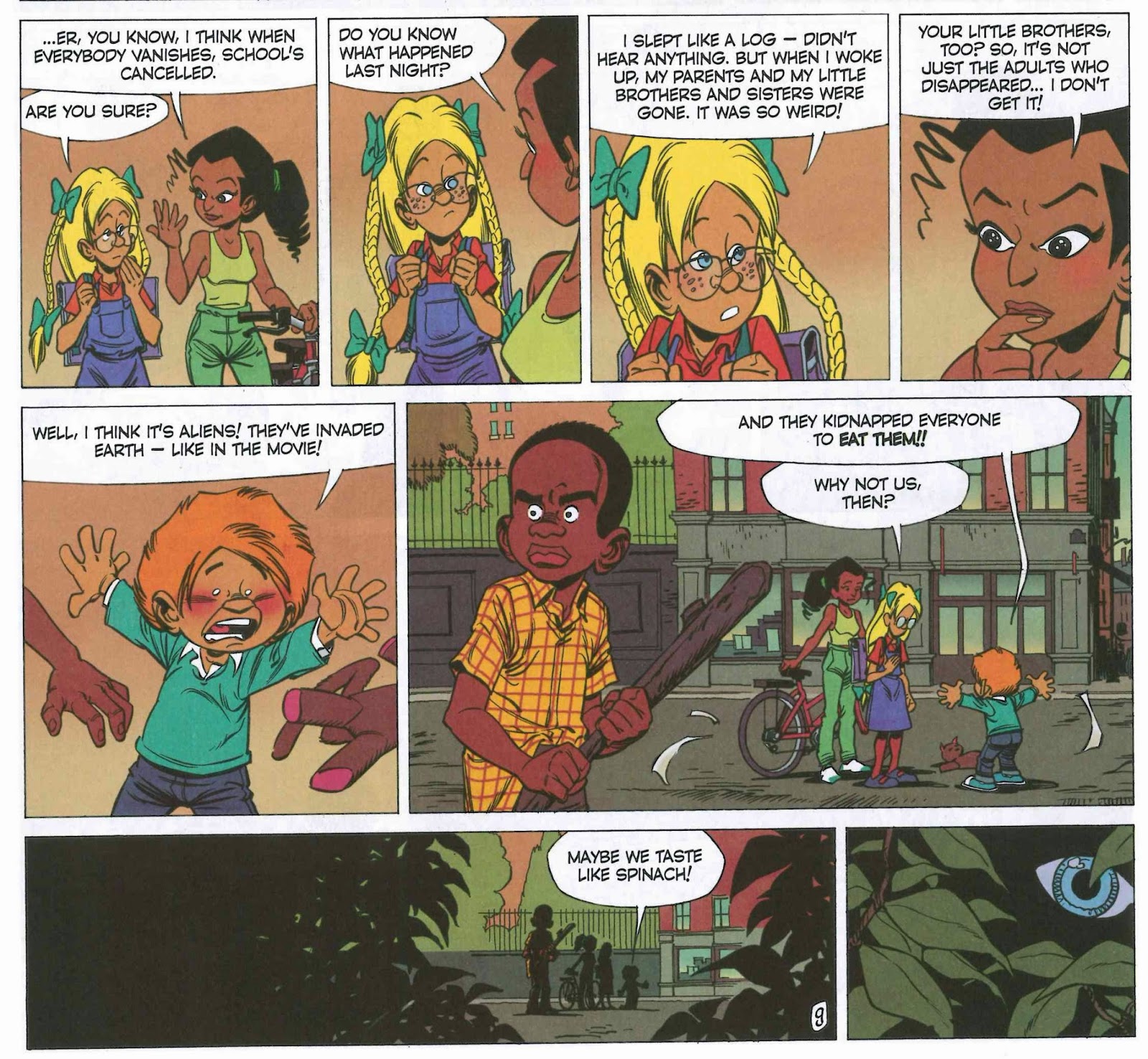 There's a real air of utter quiet and stillness that's conveyed particularly well- lots of focus on stationary objects- buildings and cars and just seeing these detailed backgrounds of a town completely devoid of people, made even more pronounced because it's these 5 children juxtaposed against it, with everything much bigger than them, combined with the notion of children as innocents to be protected, highlighting their vulnerability further. Gazzotti also uses a technique where the children are the most lively, animated aspect, brightly coloured and dynamic, the only source of movement, with all else rendered in a much more realistic style,  and hues of darker green , grey and brown.

Alone veers away from the traditional children free from parental or adult figures portrayal- all of the kids seem apprehensive and sensible, keen to work out what's happened and to restore order, whilst simultaneously being relatively unfazed and curious. Vehlmann avoids the cliches- there's no going into stores and grabbing whatever they can, doing what they couldn't do in the absence of adults, at this point they're still scared and unsure- the most they indulge in is a swim and splash in the previously off-limits water fountain and raiding a snacks machine for sweets and chocolate.

There's action too, as the kids discover their feeling of being watched is very real- animals have escaped from the zoo, but there's no time to ponder as to how, as they customise a jeep that will help evade the tigers and rhinos on the loose, and attempt to find a suitable place -safe enough and high enough- to make base. The kids make a fort and snuggle in, wondering again about the fate of their loved ones, while thanking Dodzi for taking care of them, and that leads to this incredibly poignant moment: 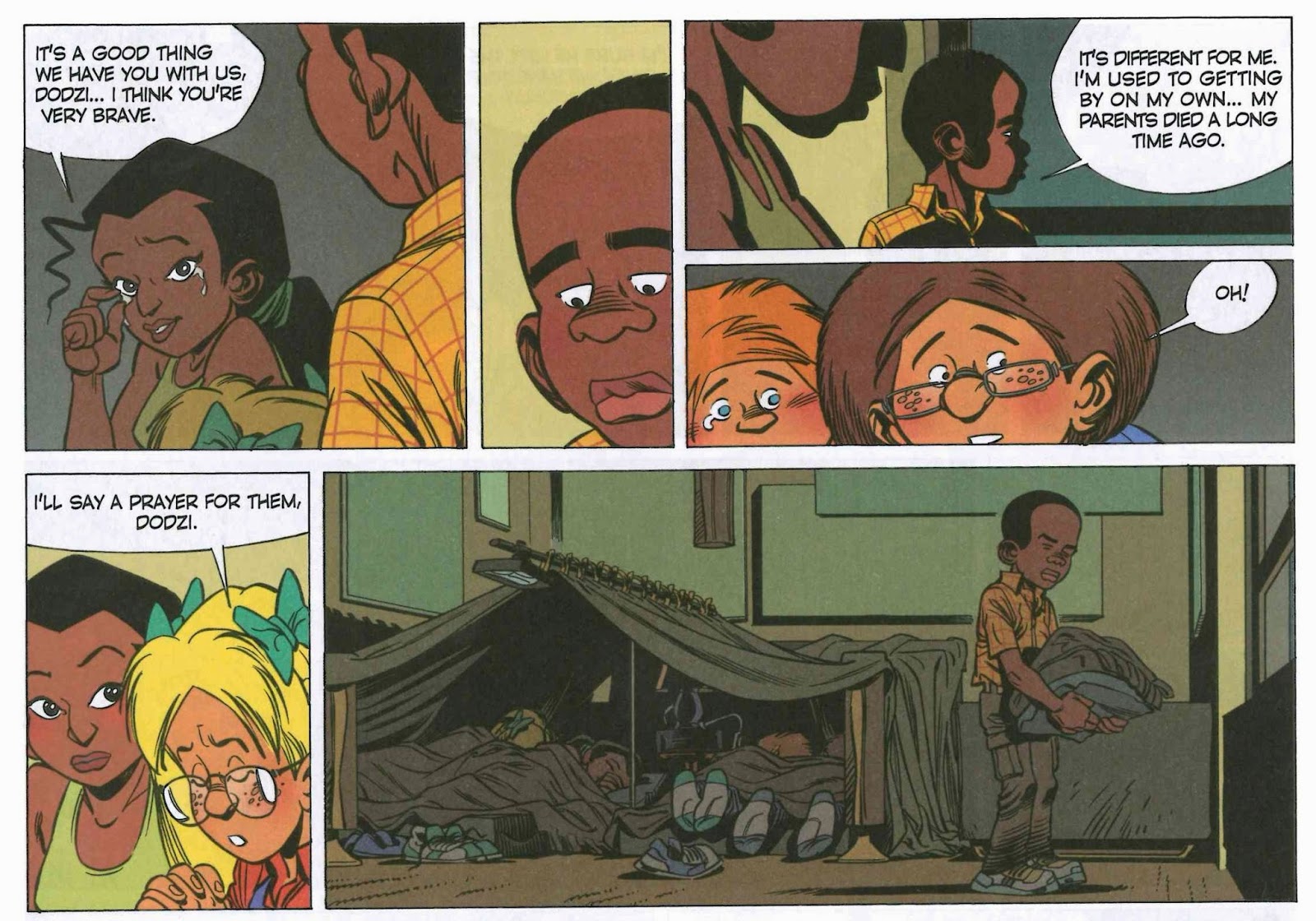 The Vanishing is such a good beginning, focused, a comic that kids will absolutely love with adventure and intrigue, and 5 great characters to get behind. This first volume sets the tone firmly- smart drama with the potential to go in a variety of directions- you get the feeling this is the kind of series that could continue strongly for a while, progressing nicely, revealing a little here and there, weaving in new threads and people, building on tensions and situations, but it's set itself apart already. I'm very much looking forward to the second book in a few months. 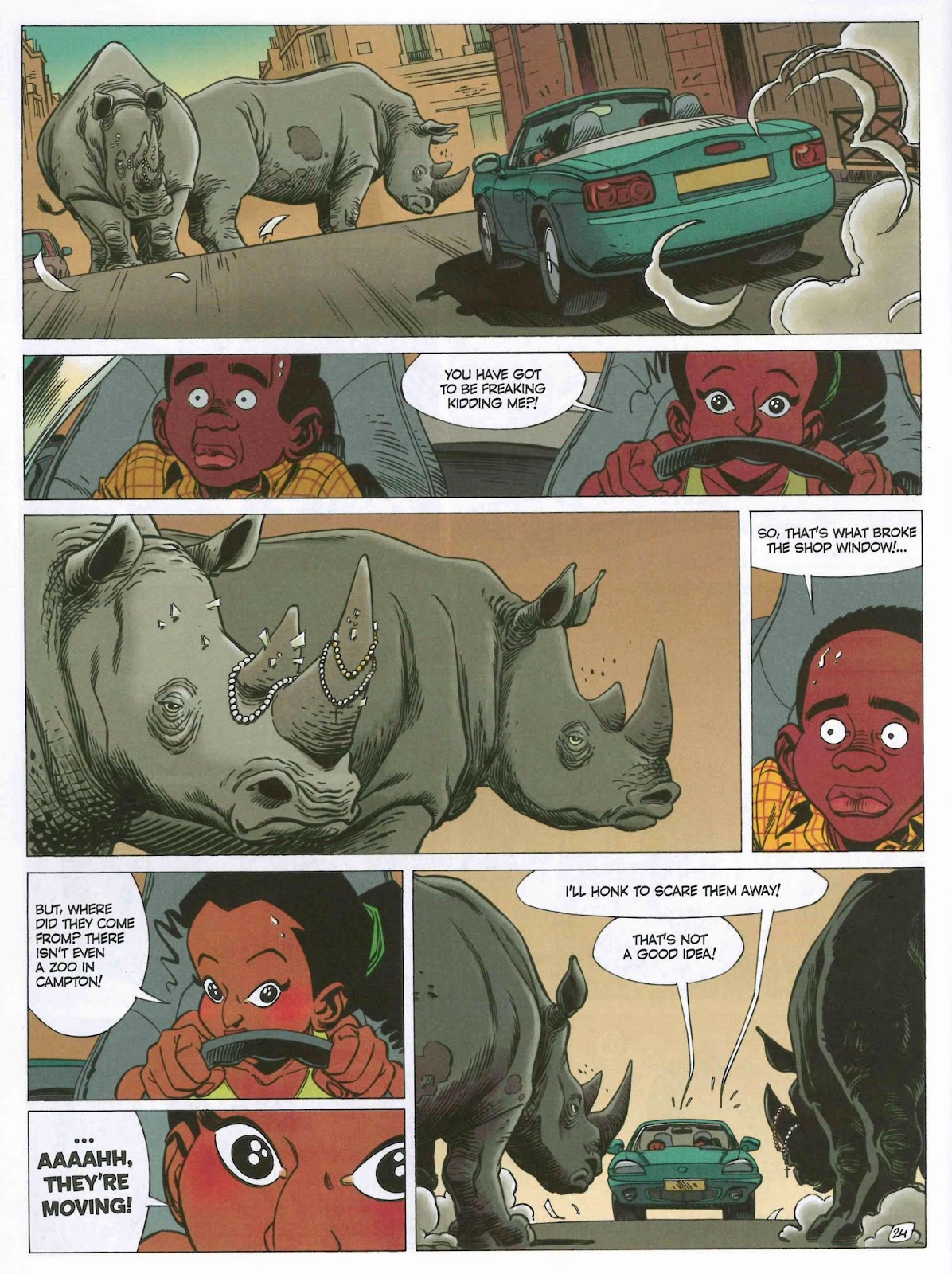