Comics carousel: monsters, outside and in 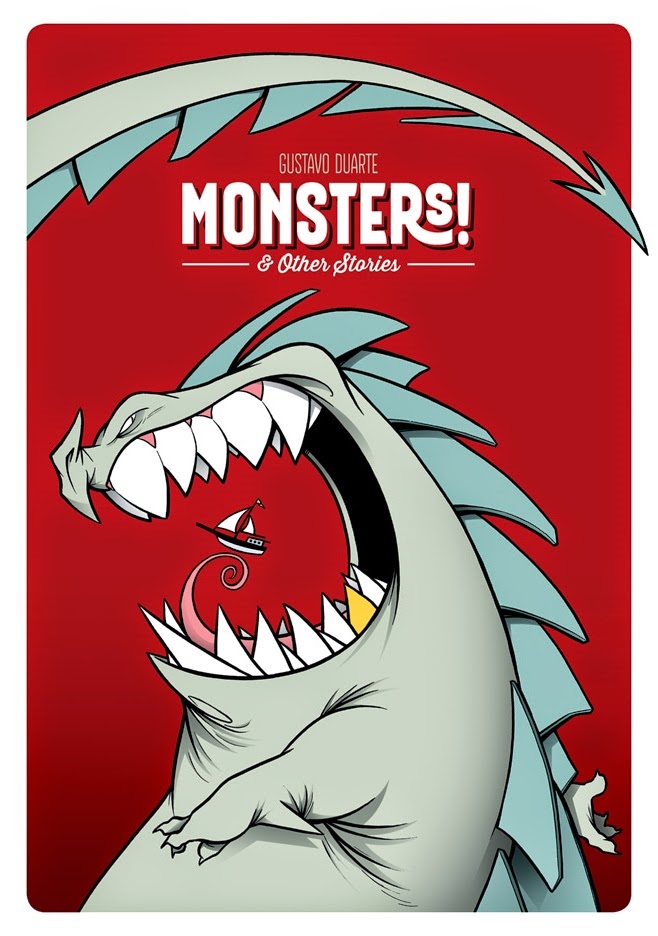 Monsters! & other stories by Gustavo Duarte, Dark Horse: Duarte's first American book release collects 3 of his wordless stories in one volumes; the titular Monsters (published in 2013), Birds (2011) and Co! (2009). I hadn't heard a peep about this book or Duarte prior to comic across this on a visit to a comic book shop, and I always find it that bit more exciting to come across an amazing work like this totally unexpectedly without any familiarity or preconceptions- the thrill of discovery.

Monsters opens with Co! in which a farmer is settling in his armchair  in front of the TV after a day's work, only to be startled by a bright light blaring through his windows, which upon investigation, turns out to be an alien in his garden complete with vast hovering UFO directly above. There's just so much pleasure to be derived from Duarte's cartooning; as an ascending vortex of twirling pigs and equally rotund man is sucked up aboard- it's timeless, classic, and the epitome of 'deceptively simple,' in that it looks effortless, beautifully clean and clear, the lines fluid, the movement organic, but we all know achieving this kind of seamless magic is far from easy. As the farmer finds himself first turned into a pig and then over-run by chicken- chickens everywhere- in the fridge, baby chicks, eggs, a giant hungry chicken waiting outside, Duarte takes the reader on a woozily happy, trippy, out-of-body dream sequence, popping the bubble at a perfectly judged moment.

My favourite story here is Birds, a darkly humorous sketch of 2 feathered office workers who find their workplace the target of the grim reaper, and hole themselves into a room together, scrambling to outwit him, even as their colleagues drop one by one. It's a superb, escalating comedy as they realise everything around them is a death-trap, even the water from the cooler, with Duarte again building, building the narrative and tension to his sublime, patiently waiting end. Monsters sees three gargantuan beasts -a Godzilla type lizard, a turtle and an octopus- emerge from the sea and proceed to wreak havoc upon the city, with only one man able to stop them. It's the longest story here, and where the others are tightly paced, this spins out for too long, loosing the rhythm and beat Duarte's previously established so well. Still, Monsters is an exquisite, joyous book, which to the uninitiated heralds the arrival of an exemplary cartoonist. It's the perfect antidote to more text heavy comics, providing a more internally quiet reading experience, allowing the reader to soak and revel in the expressive beauty of the work. Highly, highly recommended. 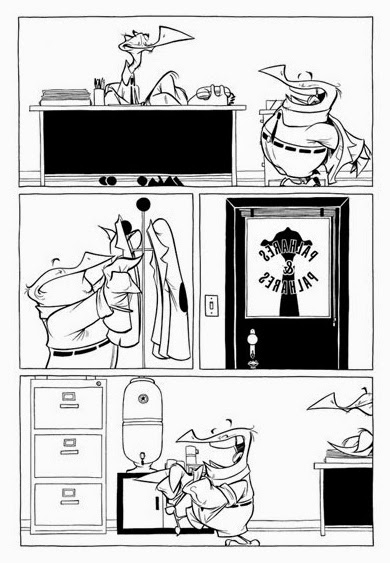 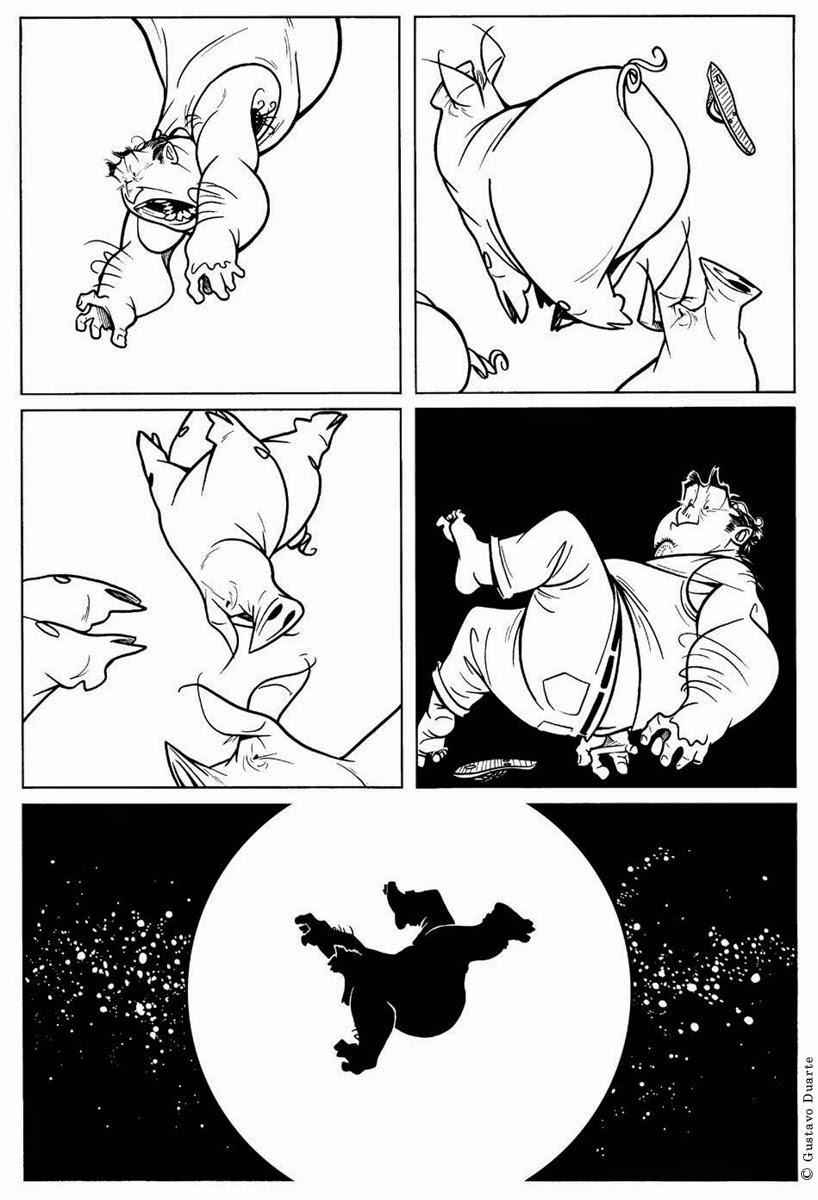 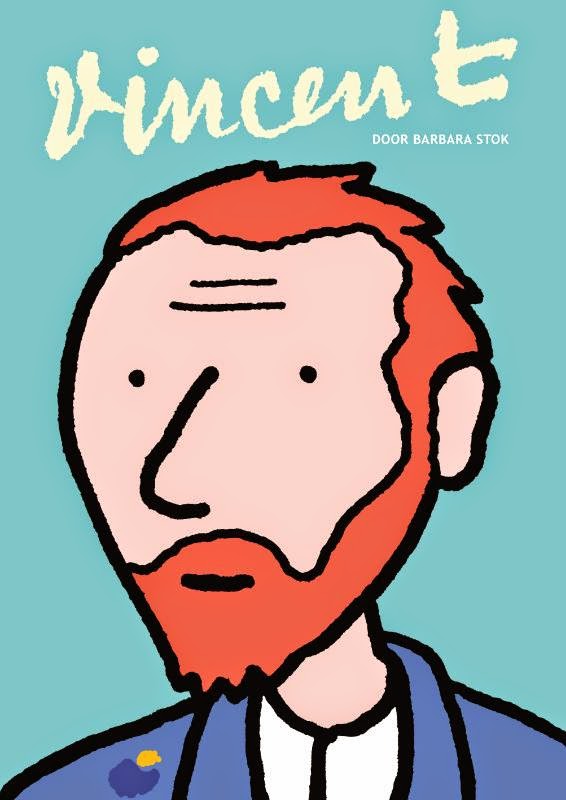 Vincent by Barbara Stok, Self Made Hero: Something I'm still working on doing is viewing comics as a whole. When I'm reading, I tend to whizz through, not really focusing so much on art, and then coming back a second time to take in. I think this is partly because I was such a huge prose reader, my focus has always been on narrative, so when I read that's what I want to get at straightaway. But in comics the art is part of the story, working in conjunction with the words to convey narrative. It's something I actively work at in my comic reading, slowing down and paying closer attention to what the art's saying. Which presents an applicable angle for the graphic biography- a rising genre in comics. Comic biographies aren't simply a distilled, illustrated edition of packaged facts, to succeed at their function, they must offer new element, one which can often come via the artist.

Stok's biography of Van Gogh focuses on the time he spent in Provence, as Vincent leaves behind his brother Theo, determined to strike out and push his art further, to place on the canvas what he envisions in his mind. At the same time he dreams of setting up an artists studio, imagining every artist to be like himself, placing art above all else, fully dedicated to relentless improvement- renting a house to which famed artists will flock to as a haven of creativity. The latter pursuit is given a rude awakening when his first guest, Gaugin comes to stay, at first game to painting together and encouraging one another, but increasingly weary of Van Gogh's intensity and lack of other interests, leading him to leave. Even as his art begins to slowly gain some acclaim, Vincent's bouts of what appears to be deep depression grow steadily worse, lasting for days and weeks on end, cutting into his painting time and cyclically making him more despondent.

The manner in which Stok has approached this subject is masterful. You have a person and images which are so widely ingrained in the consciousness of your audience, but Stok has chosen to go for a simple, clean, stylised cartooning with bright, vivid colours, an integral facet taking into account the material at hand. The way she illustrates Van Gogh's illness, breaking up panels with sudden, jagged zig-zags, and a descending curtain of black dots- a pointillism almost, as everything around him becomes unclear, disorientating, is such an effective technique. It's her individual style that manages to portray Van Gogh, the man (to use an awful cliche, but stripping away some repeated associations), his love and passion for art, the pleasure he derives from it, his healthy, supportive and loving relationship with his brother Theo, and yet still conveys the melancholy and acute pain his singular temperament and uncompromising attitude brings him. You might look at the cover and pages here, and think this isn't the kind of comic you'd call beautiful, but it truly is- Stok's cartooning is so pleasing, and her crisp, symphonic renderings of Van Gogh's instantly recognisable masterpieces have a charming character that's all their own. 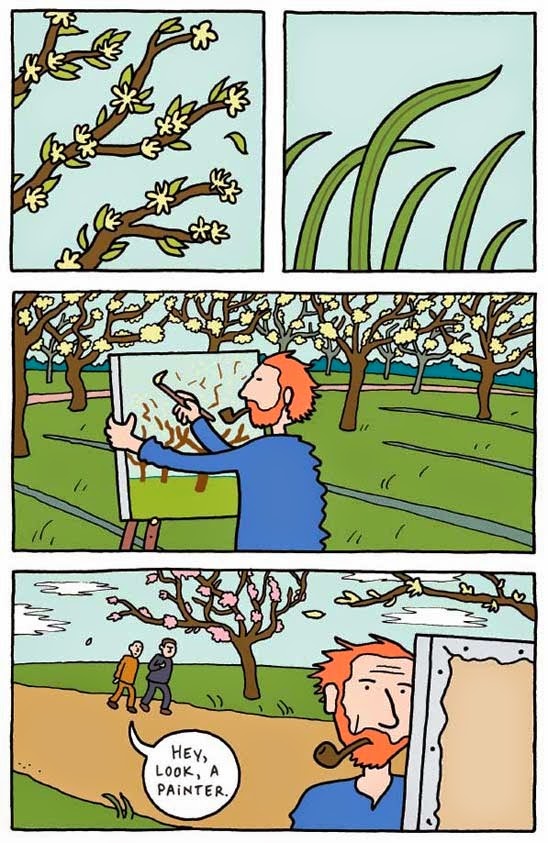 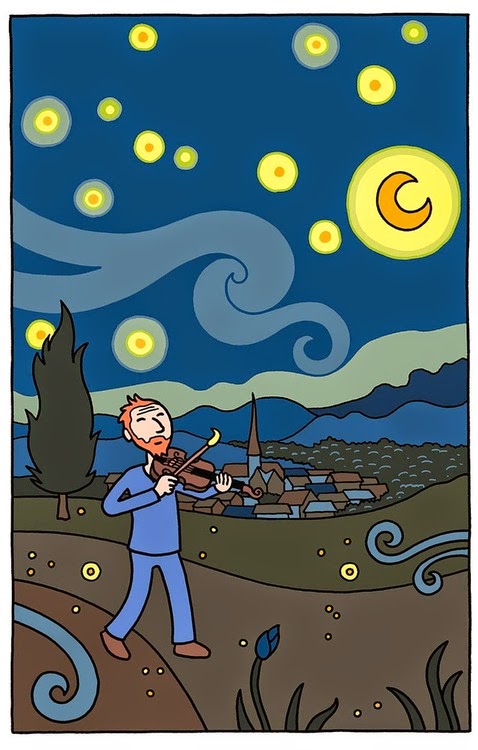 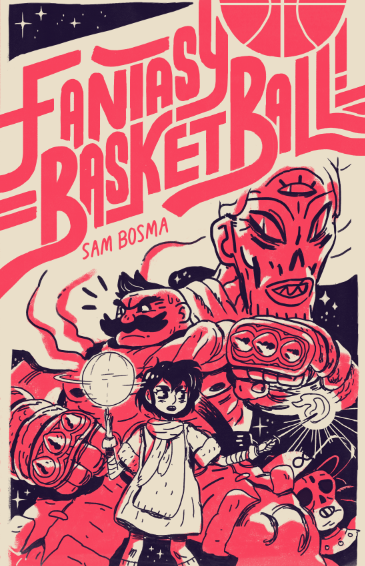 Fantasy Basketball by Sam Bosma: The first Sonic the Hedgehog was released in 1991 and within a years time, we had acquired a games console and would play it rabidly after school. I was 5 years old,  and my sisters and I were very fond of telling anyone who would listen- and those who wouldn't- that we were the proud owners of a SegaMegaDrive. It had to be said like that- fast and all together, or extra slow 'Se-ga. Me-ga. Dr-ive' to sound extra important. To date, that (and the Lego Batman game adapted for mobile phones which briefly obsessed me) is the extent of my gaming experience.

It's with genuine interest that I've watched the gaming and comics communities enmesh ever closer over the years, with the former arguably influencing the latter in a more impactful way, in terms of artist style and choices. It's difficult to quantify, but there's a plethora of artists- comics-specific- and otherwise, who draw greatly from video-games and animation- a segment that I would argue have provided comics with yet another facet which enriches the medium. While some gaming comics explicitly reference or play off particular texts recognisable only to the already familiar, others are much more  deft and evolved, taking tropes and borrowing elements to amalgamate ideas and produce a new narrative. To that end, Sam Bosma's Fantasy Basketball is a terrific example of that- and in case it needs pointing out, a hugely fun, and stupendously good-looking comic in its own right.

Bosma's an immensely gifted artist, mixing the Japanese manga adventure/mission with staged quest gaming, throwing in a little magic along the way. Fantasy Basketball sees it's odd-pair characters - Mug, a huge, mustachioed, brick-house of a man (I think), and Wiz-Kid, his apprentice/partner in a temple, trying to pass from one level to the next in order to meet and defeat the boss, gain his power and continue further. Only the decrepit being they face refuses to engage in such piffle as single combat and may the best man win, instead challenging Mug to a basketball game. It's knowing and cutesy, but aware of it, and frankly, good enough and funny enough that it doesn't matter. Bosma plays the tropes with affection- there's a fantastic moment when the boss having agreed to the game, rises up, this ancient, wrinkled looking dude, casts aside his swathes of robes to reveal a  tall and lithe, sprightly figure, clad in Converse and shorts. Bosma really works the layouts, showcasing the dynamism of his  gorgeous art in some excellent slim, wide panels as the players lock in game, swishing around one another arms open, passing on the left, on the right. Incredibly fun, and so lovely to look at. 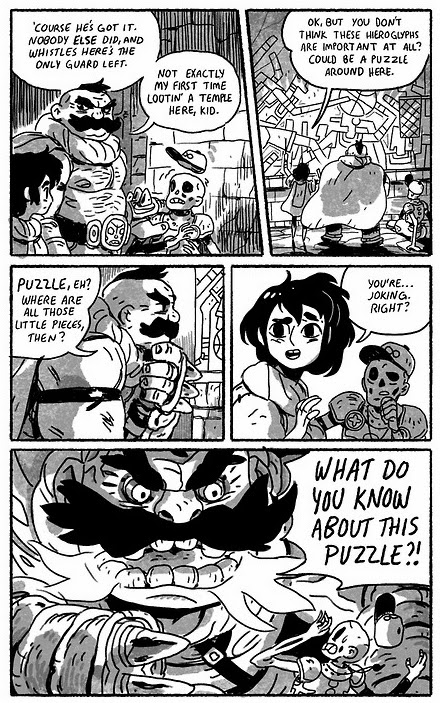 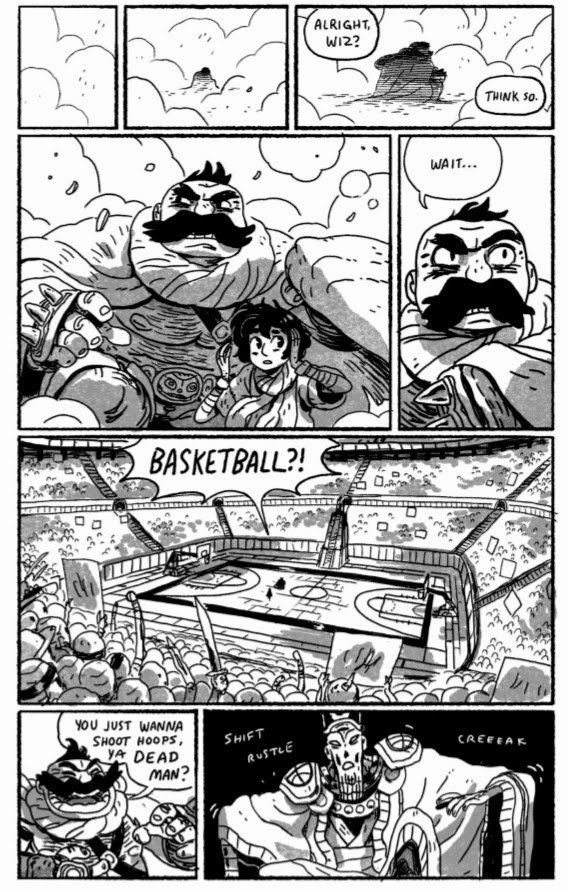