Dangeritis: a comedy in two styles 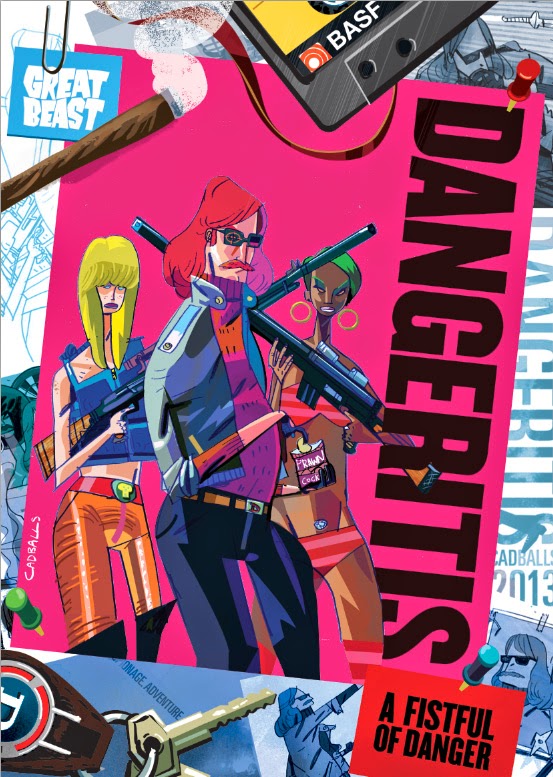 A measure of how slow I am to getting around to things: I bought Dangeritis at Thought Bubble last November, read it last week, and am writing about it now. It's the most fun I've had with a comic in a long time. I remember when Cadwell and Ball announced this project, and thinking about how different their styles were- Cadwell all frenetic movement and lines, Ball with his sleek, clean design focused art- it was difficult to envision the two working side by side. And yet they do- rather gloriously, in fact.

The subject of Dangeritis is one that usually leaves me feeling indifferent; low budget, 80's B-movie complete with token action hero. That goofiness, or love for bad actors cast in superior movies, averaging out the ratio to bearable isn't something I have a preference towards. But Dangeritis, and it's unlikely, rather gangly, flame-locked and mustachioed protagonist, Derek Danger, are a very British set-up in nature. Derek stops at a petrol station to fill his car, pops into the station to pay- where a pie catches his eye, so he buys it from the bored girl at the till, and begins using the service's microwave to render it edible. At which point he's attacked by a group of ninja's.

Which is straight-forward enough, but what you have here is Cadwell and Ball executing a concept; for the whole of the first act, they take it in turns to illustrate a page each and then pass off to the other, building up to a frenetic point which ensues in both artist illustrating various elements separately on the same page. The book is almost wholly wordless- it's all about the art here, about capturing a moment, a scene. Instead of being visually jarring, the Ball and Cadwell's styles are complementarily juxtaposed; essentially bringing the same facets to the table - a sense of pacing and individual character. From the very first page, where Ball opens with 5 page-wide horizontal panels, with Cadwell following up with a 10 panel effort- small, tight panels focusing on a close-up of the shop-clerk painting her nails, a fly buzzing, the timer on the microwave- roles are established: Ball's art the straight, dry witted man to Cadwell's zany, careening, everything going on all at once japes. So often Ball will set mood and atmosphere with his contribution, allowing Cadwell to exploit it, play off it. 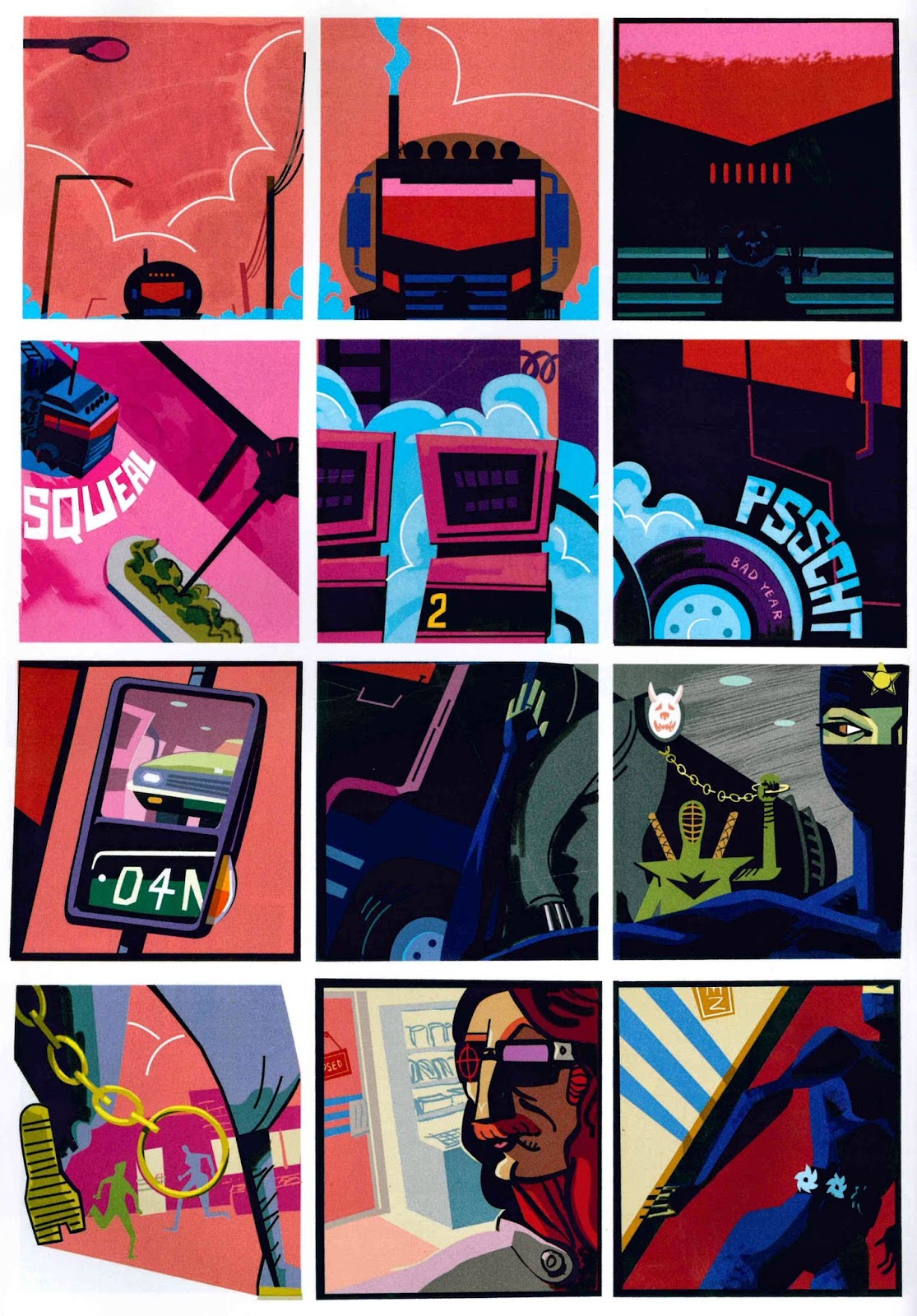 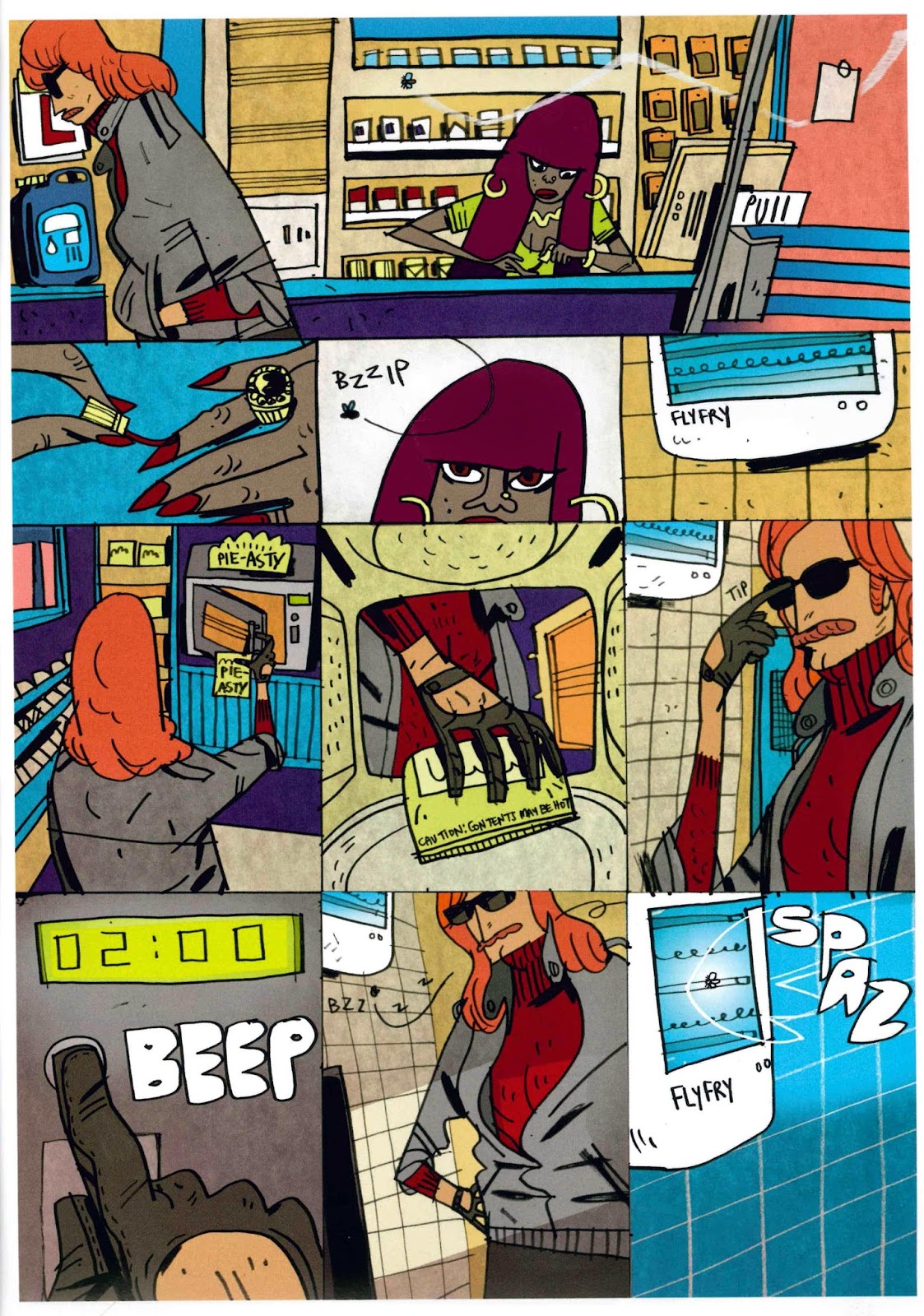 It's a comedy, ostensibly, a farce that gets even more ridiculous once Ball and Cadwell up the ante and start switching the baton from panel to panel, at which point the roles also get reversed, as the placing of Ball's very proper, sedate, timely-fashioned contributions while poor Derek struggles madly with cars, and knobs and ninjas, seem wildly inappropriate and therefore even more hilarious. There's a great double page splash spread (see below) of  Derek desperately trying to get the car to start while an assortment of ninjas descend on him- Ball illustrating the smooth vehicle bonnet and contained panic interior, and Cadwell the rain of fire outside of it.

I feel I have talked about the merits of Cadwell's art previously, and I would like to talk a little more about Ball, who, like all the newly converted  I have become such a zealous fan of. I was pretty sure I knew the parameters of digital art and comics, and equally as sure that it didn't do much for me, until I came across his work- and man, wow- really- just go take  a look at his website and pore over some of that goodness. I don't know how he does it, but he manages to infuse such character and life in his work- one of my problems with digital art has always been that it's rather flat- he can get at the essence and feeling he wants to convey, and make it all look incredibly beautiful, too. Magic. 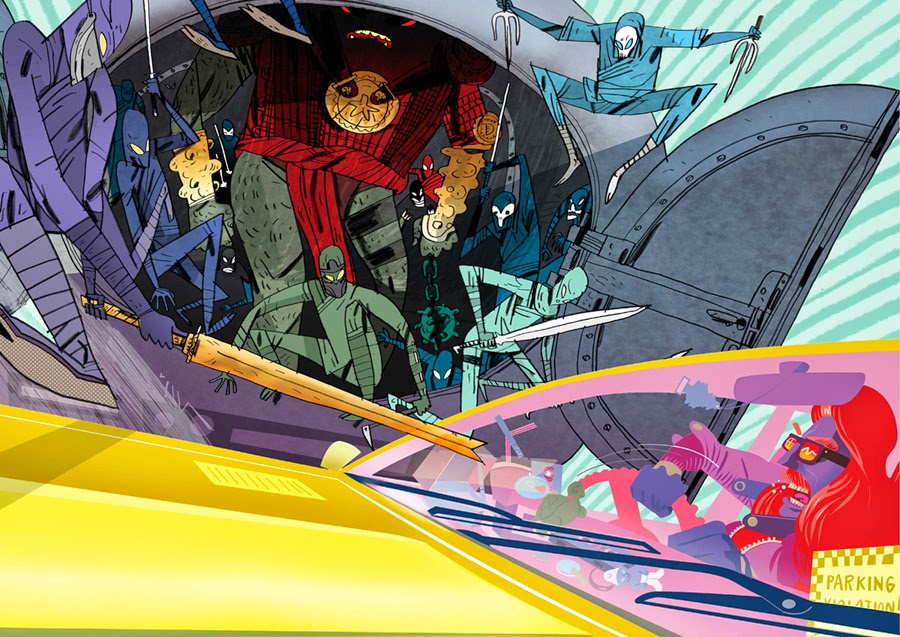 Comics are often discussed in relation to the medium of film, in the marrying of words and pictures, and also the framing of moments and events- the ability to choose, manipulate, and depict angles, lighting, colours to harness a certain atmosphere, emphasis, or effect, using them to pace the narrative, and that aspect has been deployed to a great degree here. One of the things that's instantly noticeable is the dynamism of the page and panel layouts, directing the gaze up down left right, diagonally across, inwards towards a counting down clock, outwards to a hidden figure, with the slower, introductory give and take quickly making way for a fast moving, riotous explosion of events. The gorgeous colours play their part, too, with Ball making more aesthetically pleasing, considered, harmonious choices, and Cadwell more instinctive, sticking with the same one throughout. Kudos to Great Beats for publishing it in the glossy, A4 format it needed.

It's such a showcase for comics, for storytelling, for the artists, and their work- you can see the fun Ball and Cadwell are having on the page, as they to and fro- and it translates- it's a fun, silly, read, but one that will leave you open-mouthed to the abilities of the artists and the verve of their accomplishment. 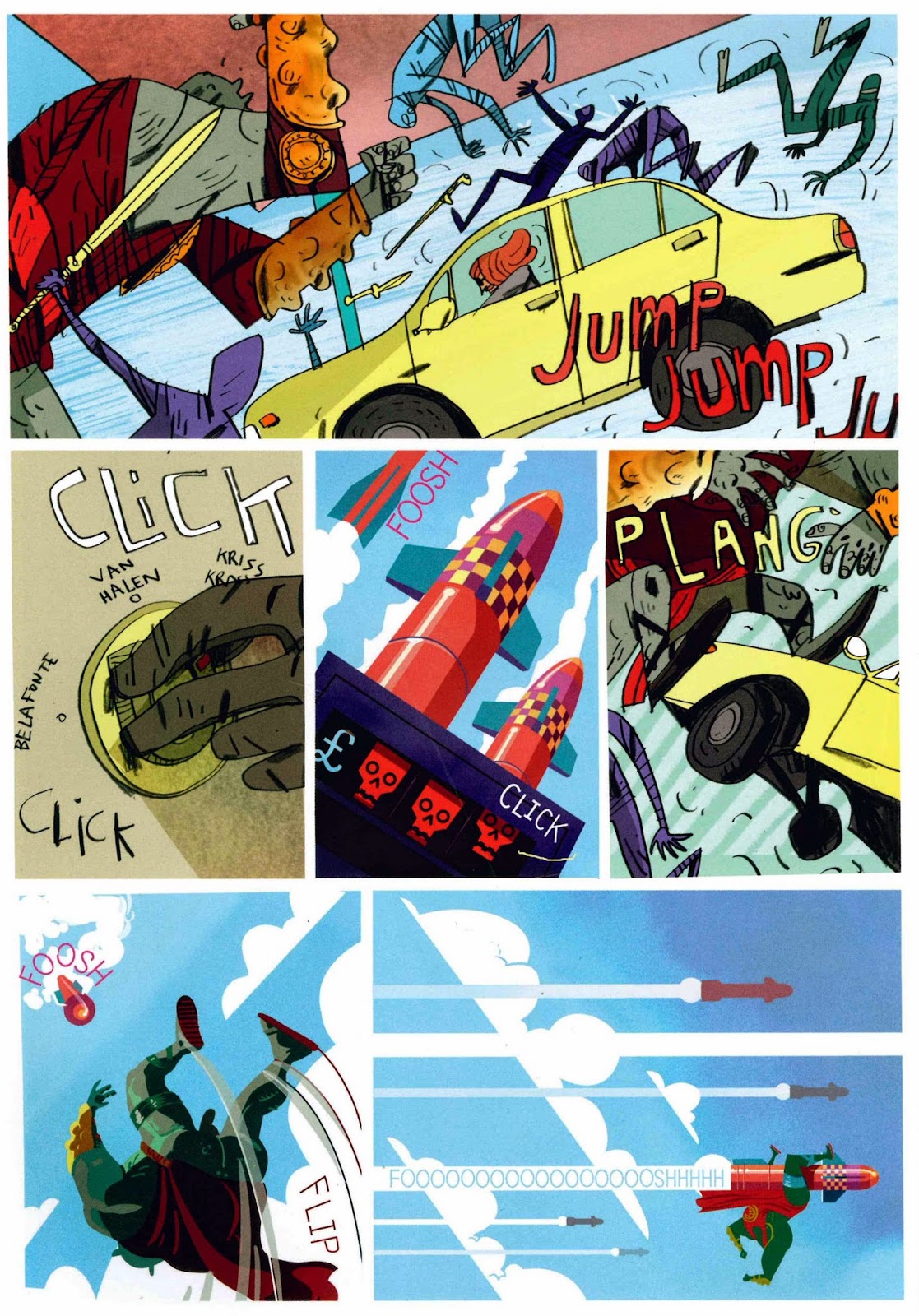 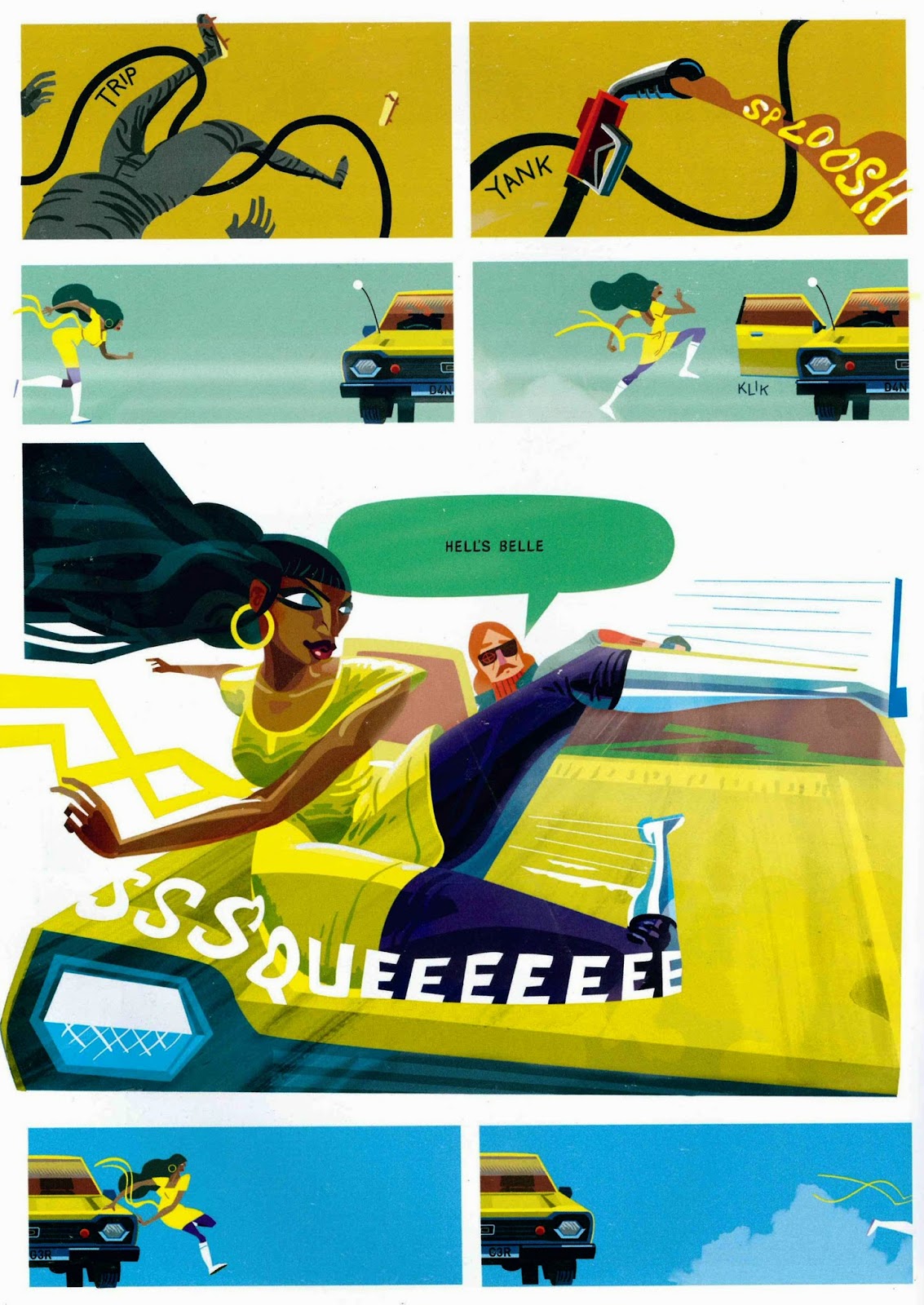