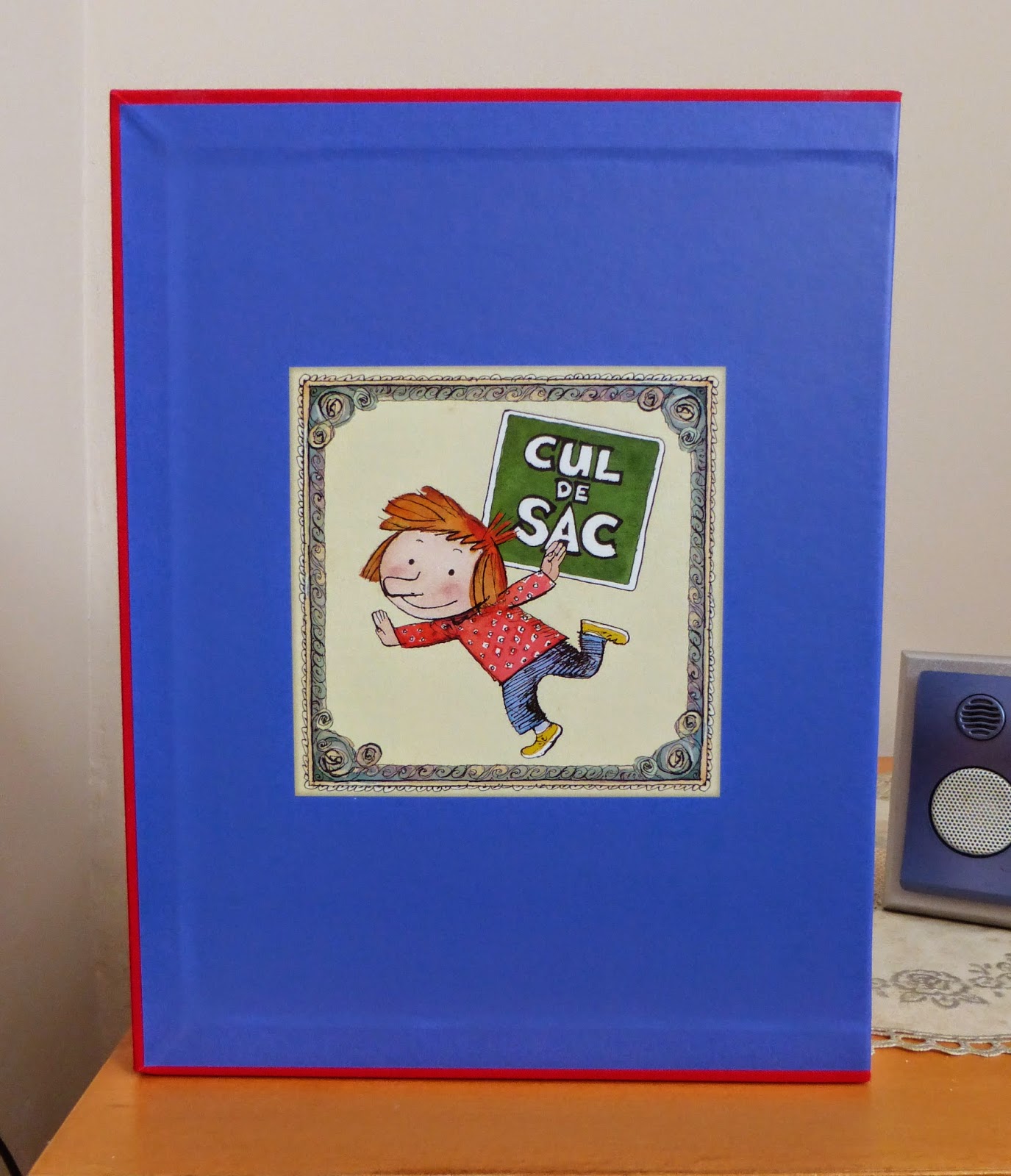 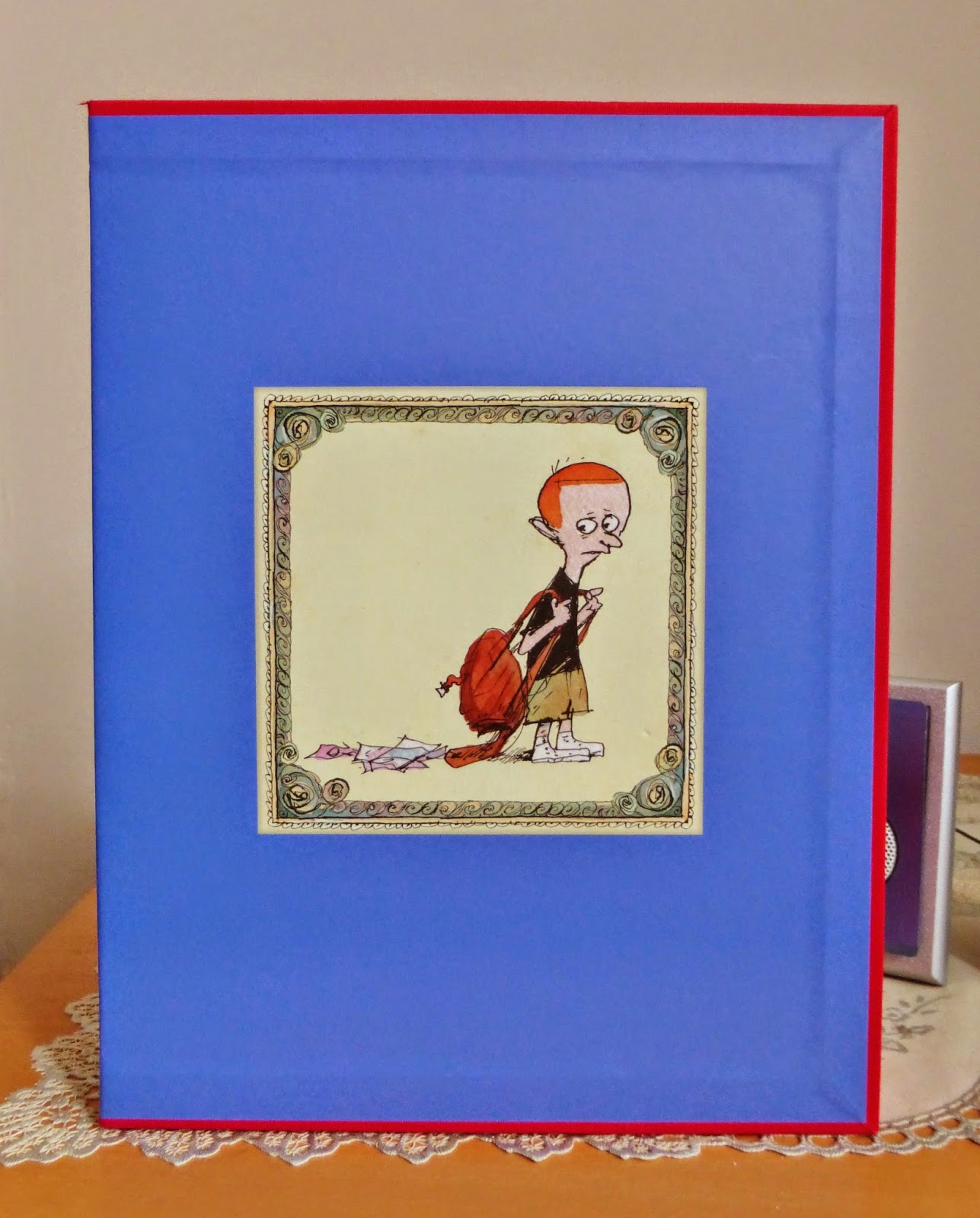 I bought the complete slip-cased edition of Richard Thompson's Cul De Sac (gestures towards pictures), and statement of obviousness aside, I thought I'd do a quick photo post on the production and design aspects of it. Although I'm very much looking forward to doing so, I haven't read any of it yet; I like the idea of going completely unknown into a work, and not just any work, but a definitive version of said work, in this case, 5 years worth of newspaper strip cartoons, and am looking forward to the immersive experience of spending continuous time within that world- I'm not a dip in, dip out sort of reader. I only know of Thompson and Cul De Sac thanks to Tom Spurgeon's relentless championing of it over at The Comics Reporter, so on the other hand I purchased this solely on the strength of Tom's respect and appreciation of it (it's been on my periphery for a while due to him)- that, and an eventual search to view a couple of strips to see whether it'd be something I'd be interested in was enough to bring us here. Thompson is currently the co-subject of a 2-man exhibition at the Billy Ireland Cartoon Art Museum, alongside the great Bill Watterson, which belies the calibre of his work. Cul De Sac has as its protagonist the 4 year old Alice Otterloop, following her life at home and at school.

So, the two pictures above are the front and back of the slip-case. It contains 2 just-slightly-wider-than-A4 paperbacks- volume one and two, each running to 314 and 315 pages respectively, with a 5 page introduction by Art Spiegelman in the first book. The bright orange/blue/red/yellow colours look lovely- attractive and inviting, but the cardboard used for the covers isn't very durable or thick, which is what you look for in 'heritage' editions which you want to be long-lasting. The binding appears to be perfect bound with the covers glued on securely enough if you take care of them. I don't mean to sit here and be nit-picky, but I like my books to be able to take a bit of a battering and still be okay, scuffs and dents aside, especially when you're paying a princely sum of money for complete/absolute editions like these, and I'm not convinced by the covers here at all, really. The paperback covers are inset with a high shine, veneered, cream, inset image which is well-done and pops nicely against the background block of colour. The paperbacks have a nice heft to them, and are much more easily manageable size, and pleasant to flip through compared to some heavy hardback beasts- looking at you Calvin and Hobbes. A purported drawback could be that the strips are presented smaller, but that's not a problem here, with either 2 double-row strips or 3 single-row strips displayed on each page clearly (some in black and white, some in colour), giving the art plenty of room to breathe.

Front covers of the paperback volumes: 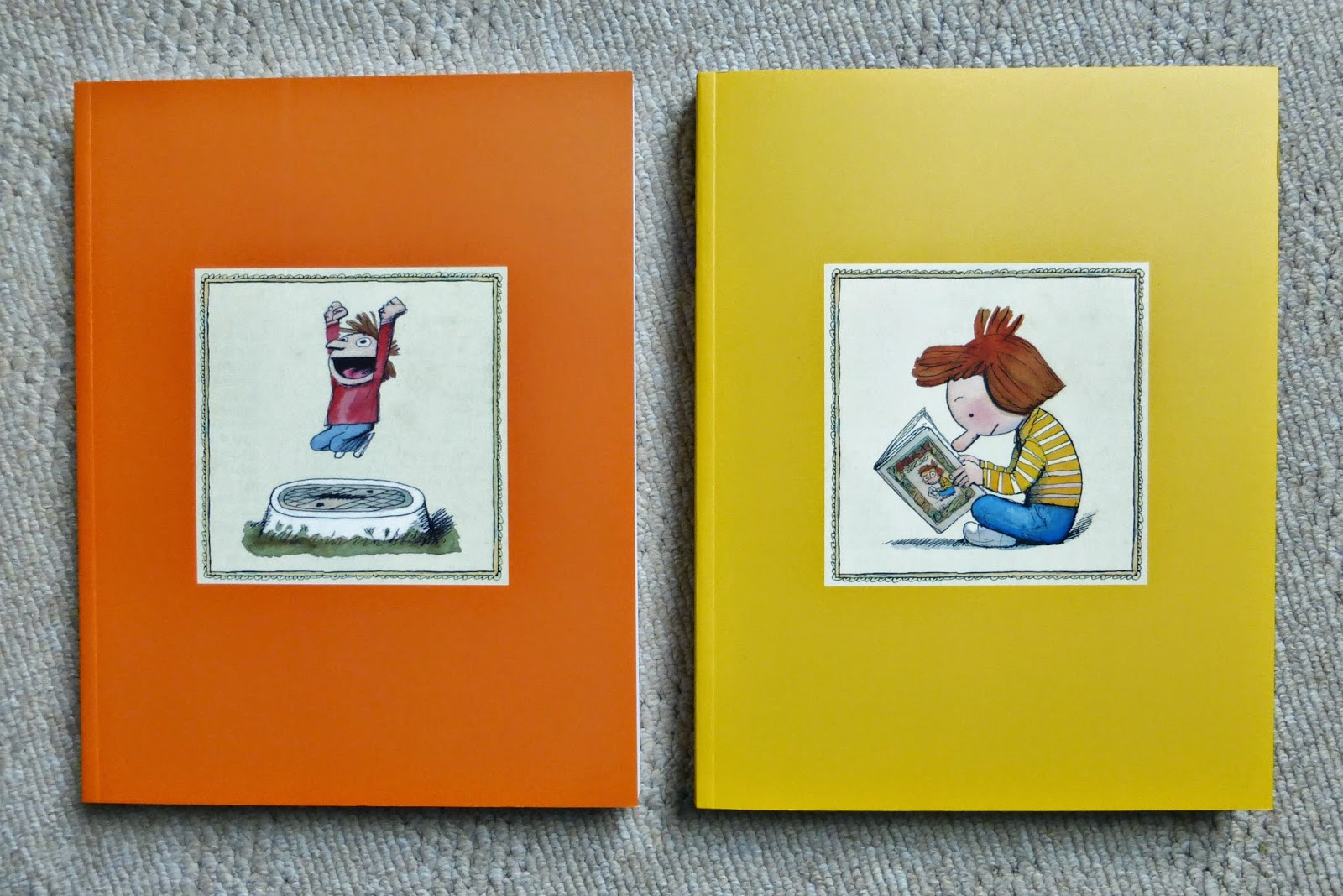 Back covers (An aside: I had trouble deciding which covers were the front and back when inserting the pictures here; I'm starting to get really dis-orientated theses days with which way books read, as stupid as that sounds. I've read and wrote Arabic and Urdu since I was a child which goes right to left, so I've never really had a problem reading Japanese comics that way, but I picked up a volume of Ghost in the Shell which was a 'flipped' left to right and my head actually dizzied in trying to wrap around the concept. I'm not sure why I'm starting to have difficulties with it now -I read Akira flipped and that was fine- but recently even with English language books something inside my head wants to start at the right): 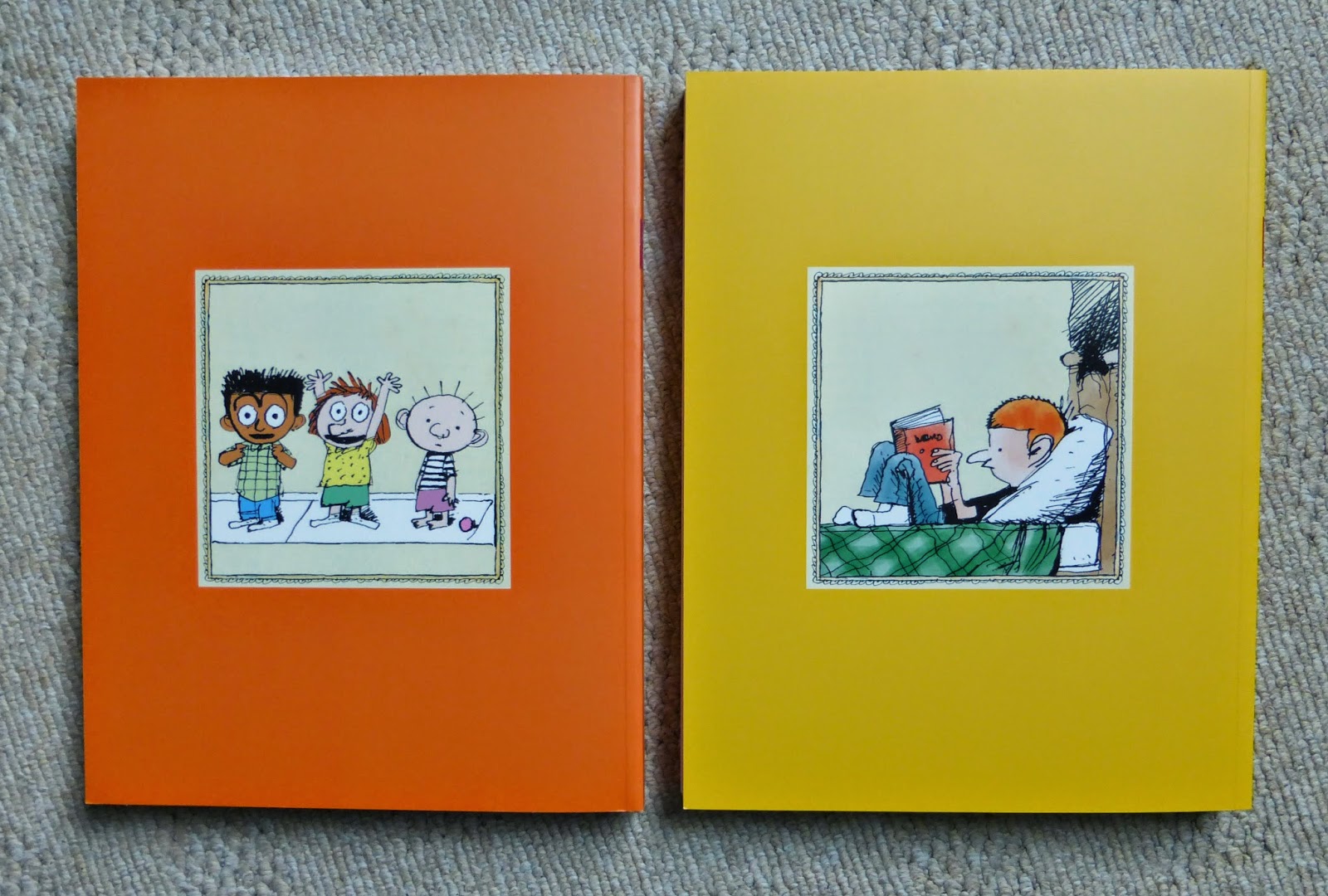 Another disappointing aspect was the production on the slipcase- it's  generally solid, but I'm confused as to why the whole thing couldn't be cloth-bound instead of just the sides. Or if not cloth bound, something more substantial than the thin paper covering used here- as you can see from the picture below, the indentations where the paper's glued onto the cloth and the edges of it, is pretty visibly pronounced. This paper covering is going to succumb to any knocks and scuffs much more readily. I don't quite understand why you would scrimp when producing something like this- people tend to expect to pay a little more for absolute/ definitive editions anyhow, and the RRP on this is £57, even getting it at £45, you'd expect something that reflects a respect towards the first complete collation of Thompson's work.

I'm not hugely bothered by it, but it does seem to be very poor practice- I always refer to the Hellboy library editions in instances like these, which are a feat of exquisite, quality book design- sturdy, stitched binding, cloth bound covers and cost a lot less than productions like this one. Granted, Dark Horse might have a bit more money to play with, and are aiming at a larger audience- than Andrews McMeel are with Cul De Sac, but surely you take into account costs which you intend to recuperate. It seems all the more incomprehensible because it's only a few small matters that could so easily be addressed, and yet in not doing so, it's resulted in the creation of a lesser product. 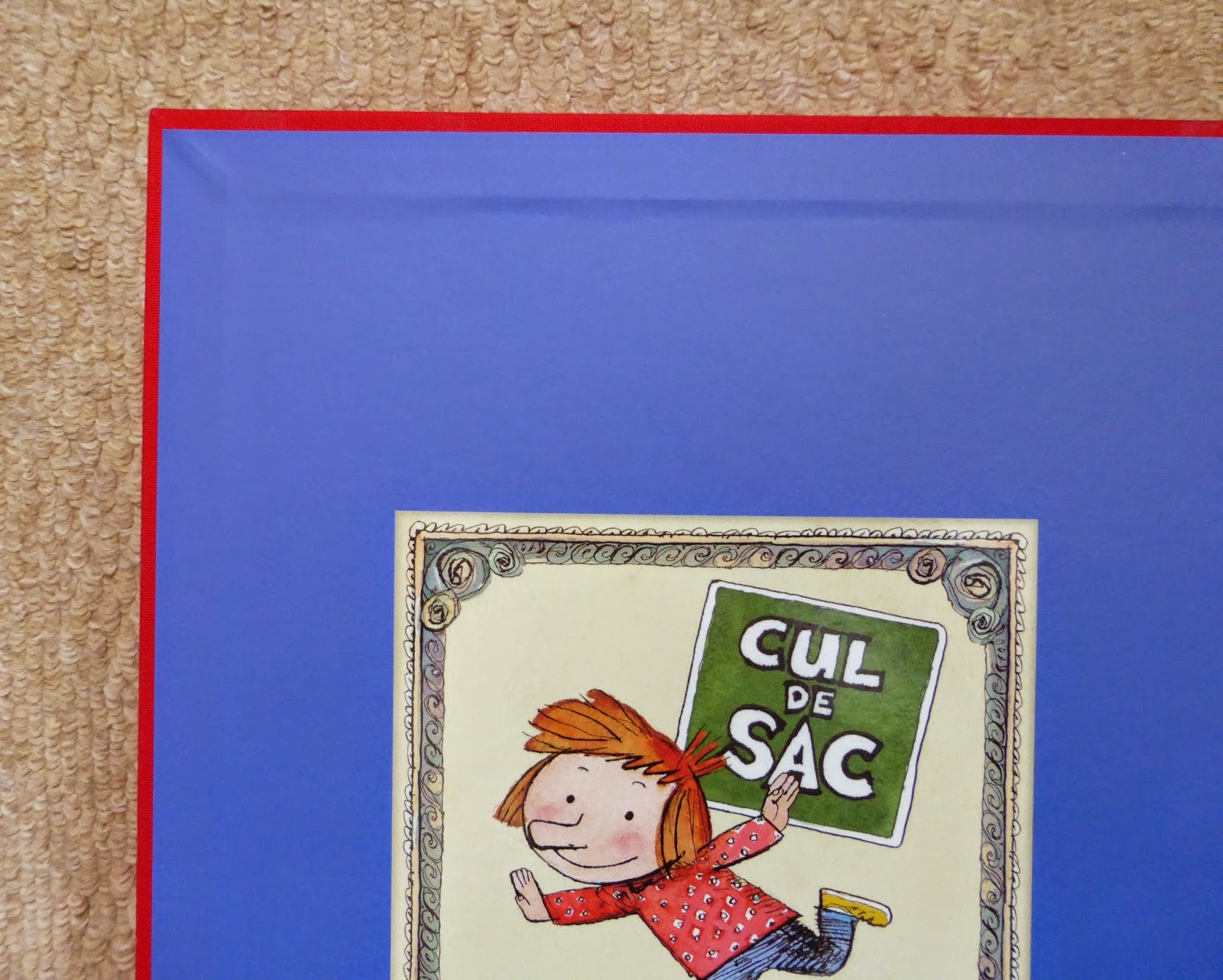 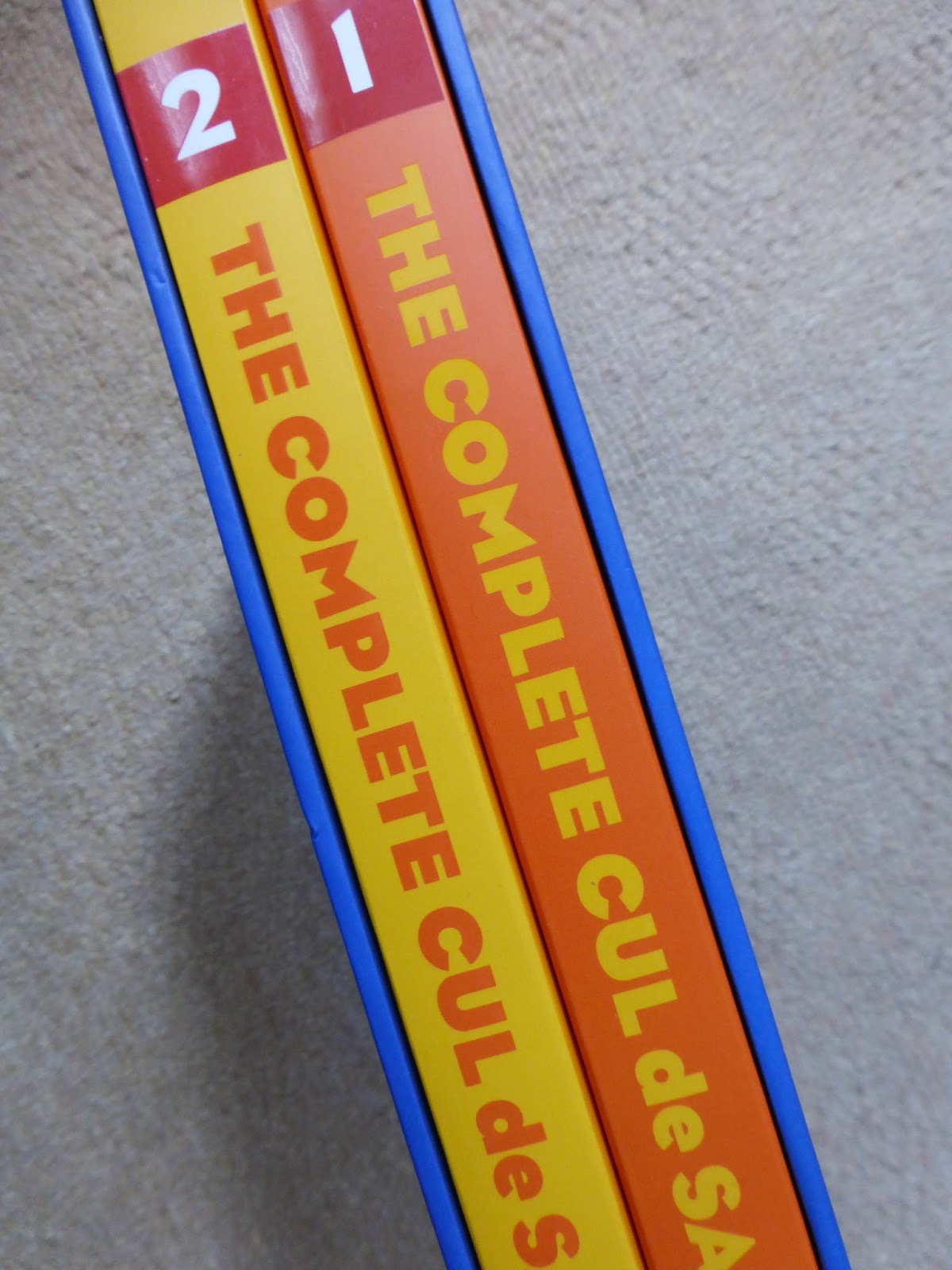 Despite these niggles, flipping through the books has me more excited than ever to begin reading them (some time in June when I'm next free)- Thompson cartoons like a wry, restrained Quentin Blake and the few strips I've been unable to resist have been excellent. I'd enthusiastically recommend familiarising yourself with Thompson's work- there are a few different paperback editions around which would provide an ideal introduction.

Some interior pages and close-ups: 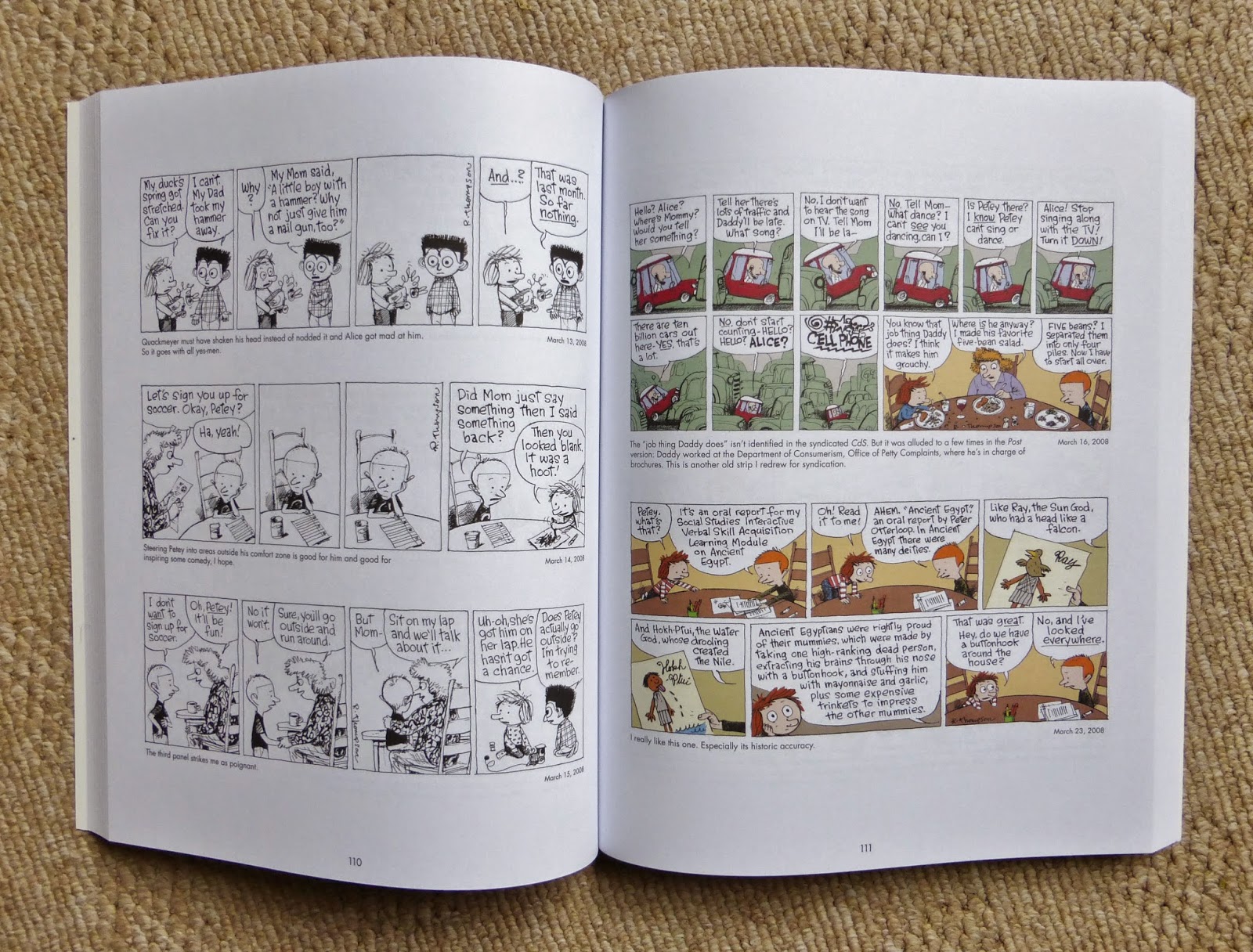 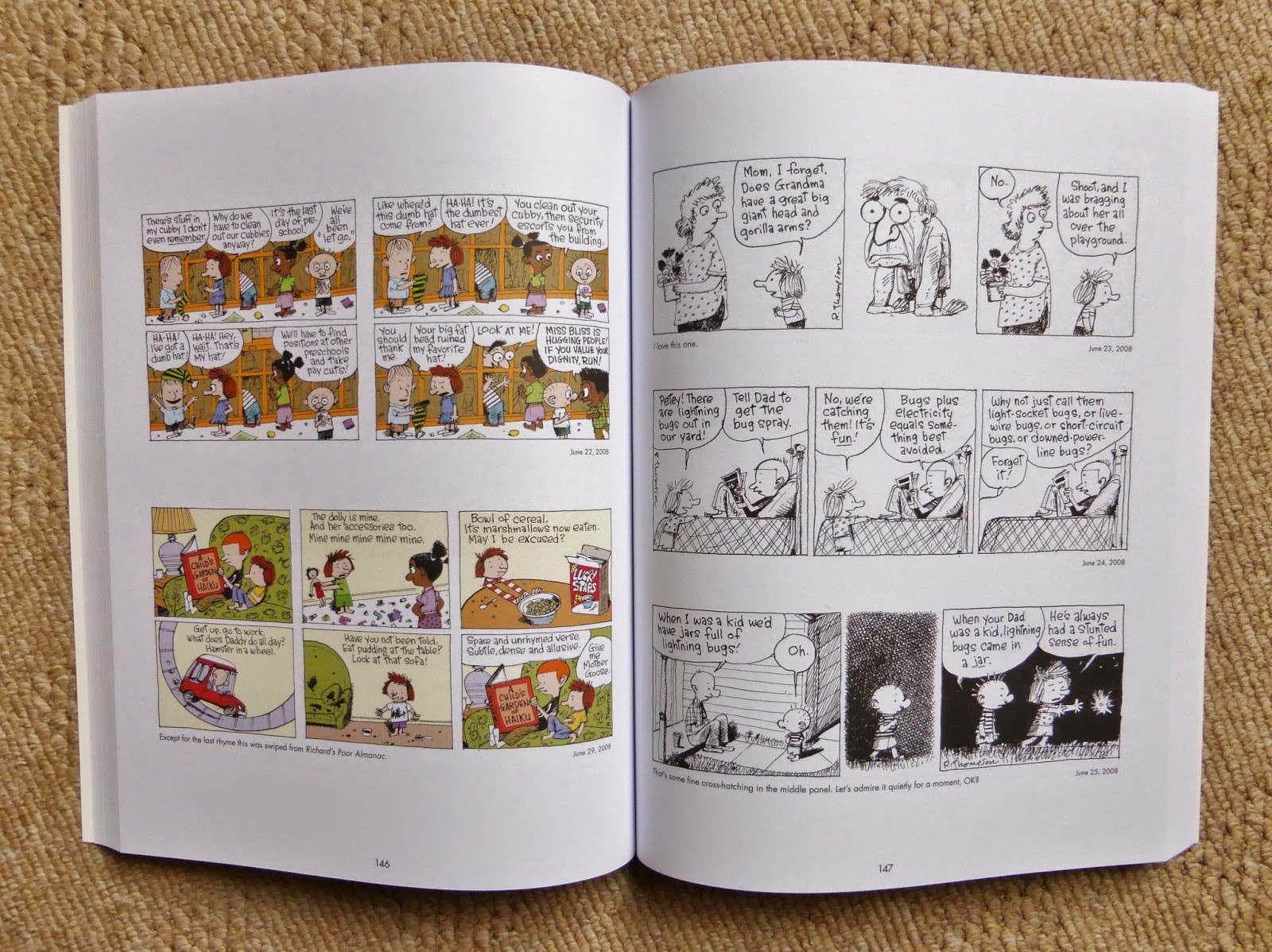 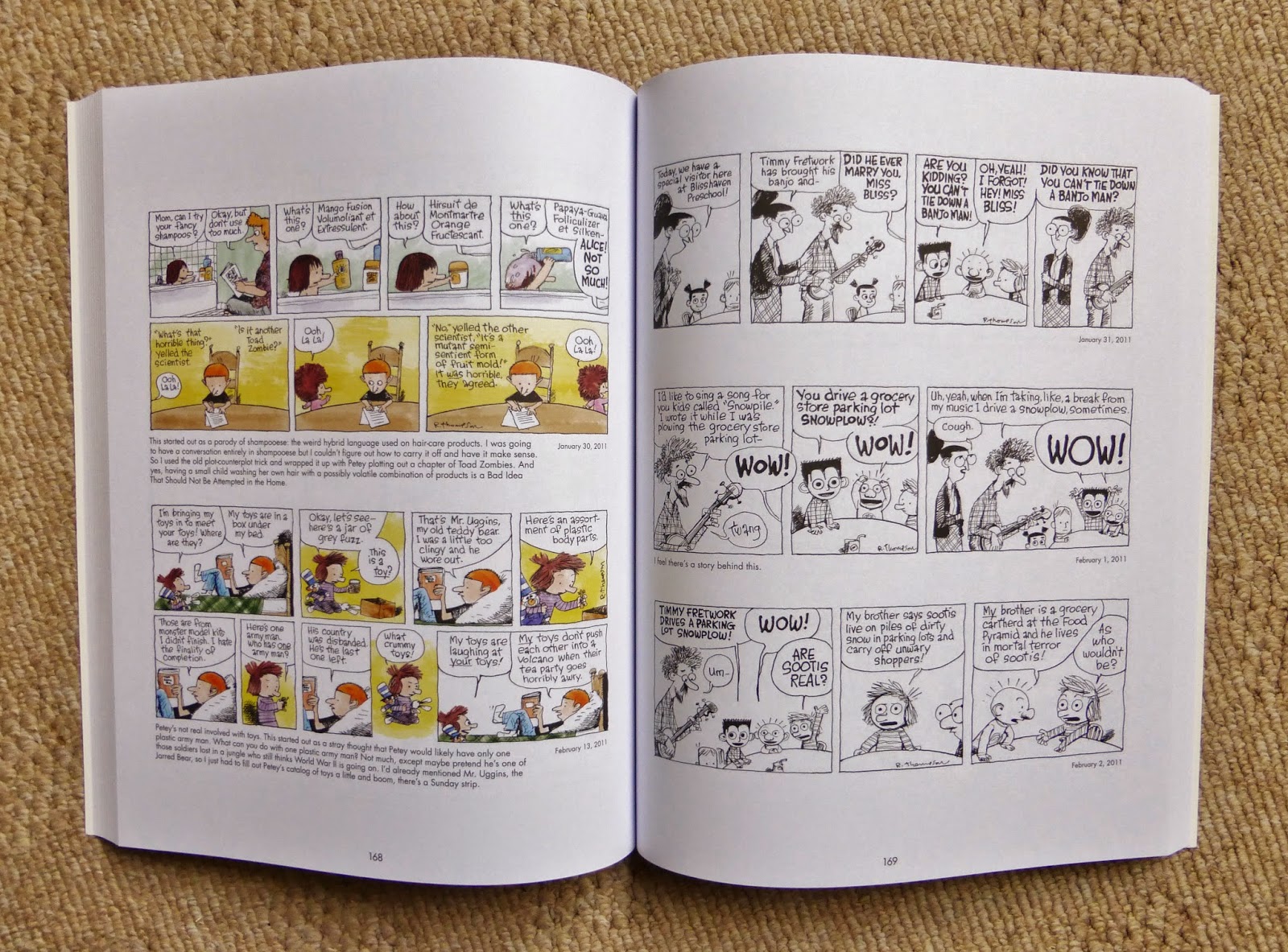 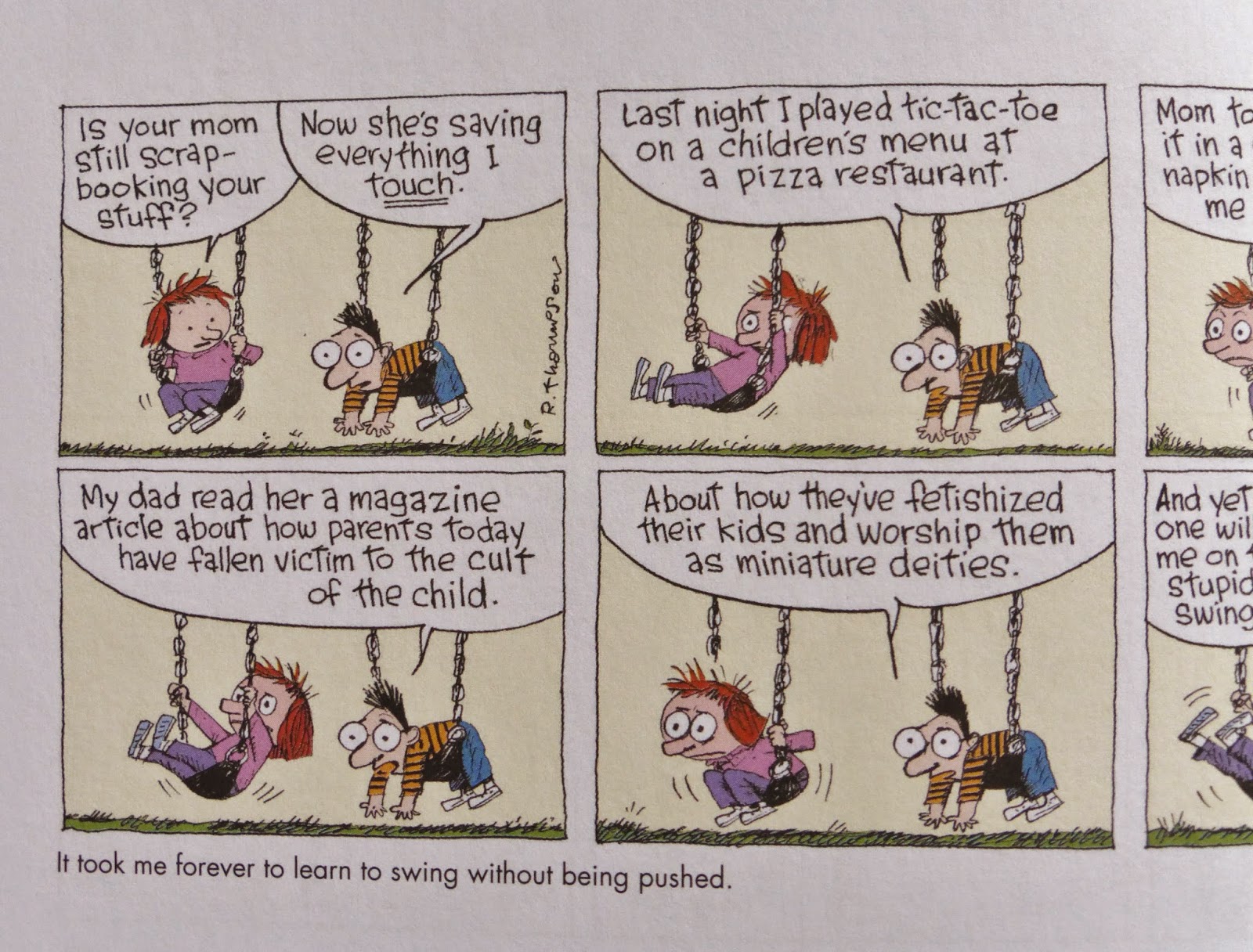