Too orangey for crows 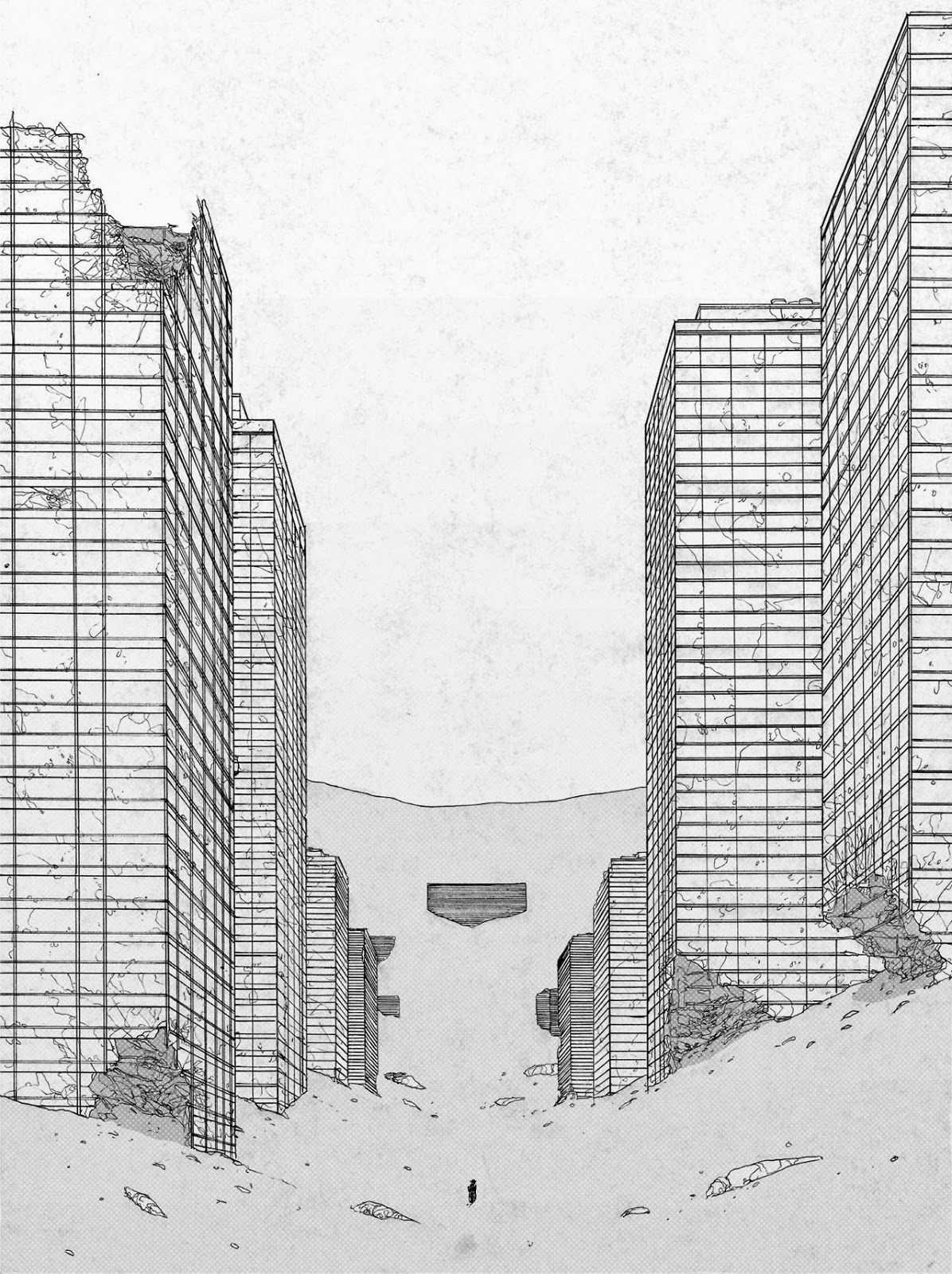 I came across Liam Cobb's excellent short comic, 'Death of a Crow' earlier in the week, which I recommend you go read first, as I'm going to discuss it, and the ending- here a little. Cobb's comic is impressive in its artistic technique- he's stated  it was an homage of sorts to Moebius and Otomo and those references are easy to see not only in the visual style, but in the strange, mythic sci-fi overtones as well as the immense buildings and post-apocalyptic landscapes. In fact, a lot of the work posted on his Tumblr is still very much of its influences; the detailed  dimpled, crumbling sci-fi comics evoking Geof Darrow and Moebius, and other pieces are Otomo from the lettered sfx to the architecture. Cobb's work is strong and capable, and he's obviously learning and studying from the best, so there's no doubt his style will evolve and come of its own.   Meanwhile, let's talk a little abut 'Death of a Crow.'

The comic features a plague doctor-reminiscent character making a trek through the desert, walking past  vast, abandoned ruins, half-buried skeletons, stopping every now and then to survey the land, and take stock of his journey. eventually he comes to what is (presumably) his destination- we get a view of his face as he looks up at this huge object, casting him in shadow. And then we get to see the object itself: a giant statue of Kia Ora bottle (or a giant Kia Ora bottle turned to stone). Around it's base, scattered lay the dead corpses of others like him- you can make out their hats and beak shaped appendages- some of them . Some have died reaching out  desperately, arms outstretched in a bid to touch/attain the statue.

It's a very good piece of work- simple, focused, and arresting. Even if you weren't aware of what Kia Ora is, you're able to enjoy it's surreal quality. If you're aware that Kia Ora is an Australian dilute fruit juice, which takes its name from the Maori greeting- kia ora, meaning 'be well' or 'be healthy,' made popular in the UK in the 70/80's and was still well-known in the 90's when I was drinking it growing up. And if you remember the popular TV and cinema advertisement they were running for the drink well into the 90's, it may just take on another meaning still. If you don't- here it is below- give it a watch:

Indeed. Made as close back as the 80's- and still running in the 90's (and people talk of racist things being of racist times), it's frankly horrible and cringe-worthy to watch: you've got what appears to be a little golliwog kid, followed by a parade of jive-talking crows- each one seeming to represent a different racial stereotype- a basket-ball player, a mammy, a sax musician. 'It's too orangey for crows, it's just for me and my dog,' say the little boy as the crows follow him, attempting to get some of the drink. So you have that racist ad, and then you have Cobb's comic which is a direct riff on it- or perhaps it can be read as something deeper.

There's the portrayal of Kia Ora as a decrepit monolith, a relic of the past, something people died trying to attain/uphold/protect- and y'know what is it, after all- a giant frikkin' bottle of juice could be equated to the equally stupid and ignorant idea of racial superiority or the preservation of 'whiteness.' This is a future-scape where civilisations have collapsed, a plague-like disease has wiped out reams of people- this is where their beliefs and ways have led them. In this landscape, the man in the mask has journeyed, perhaps in search of something he believed would help, or save, only to find a lie, and death. And above him in the sky, the  crows fly free.

I know- it's far from the most convincing of theories, but I really enjoyed reading Cobb's comic with that extra layer of reference, and playing around with the strands of rejection and de-construction of it in my head. I like it when artists take something small and push and pull it like that- it makes for interesting reading. 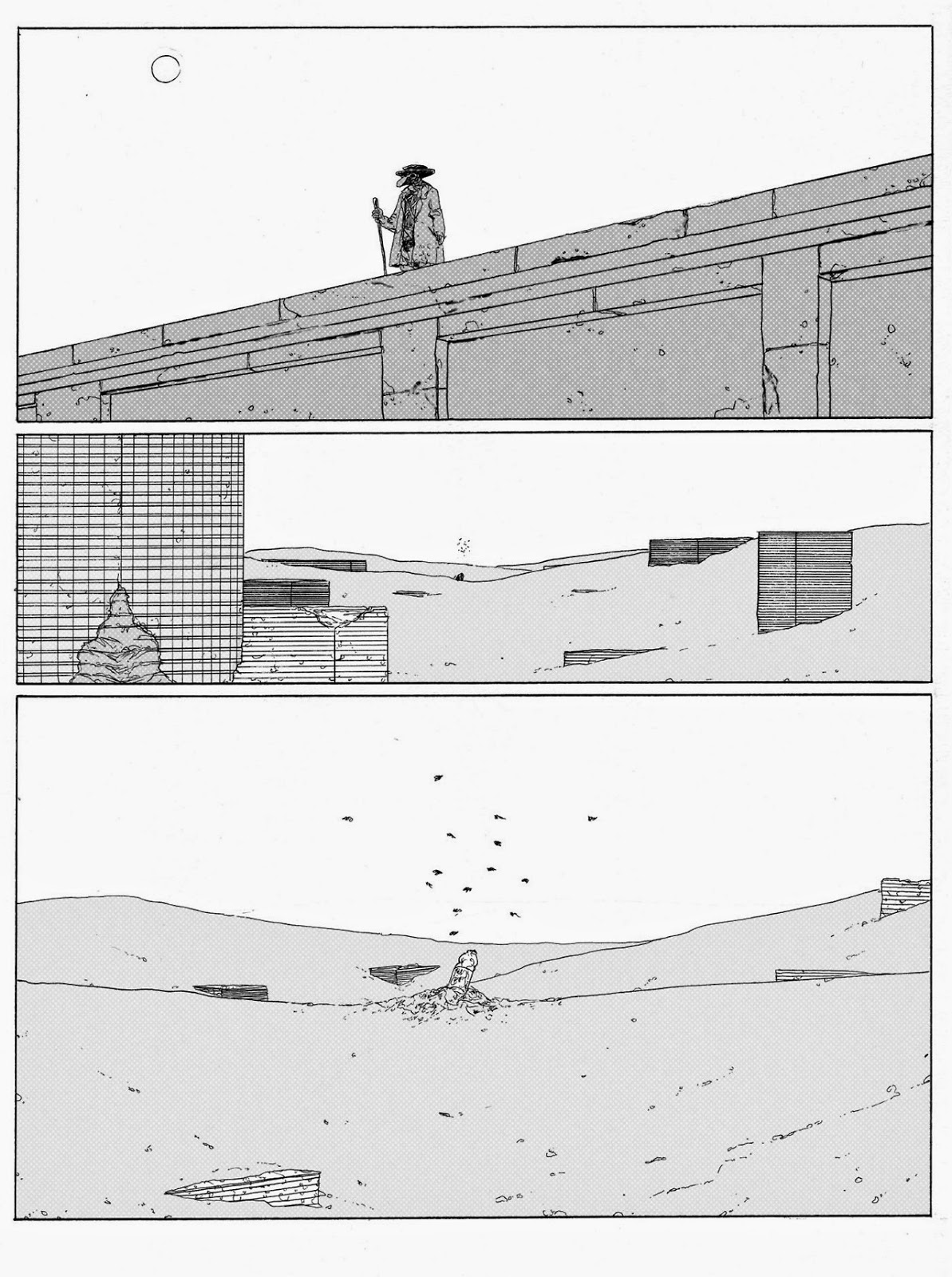 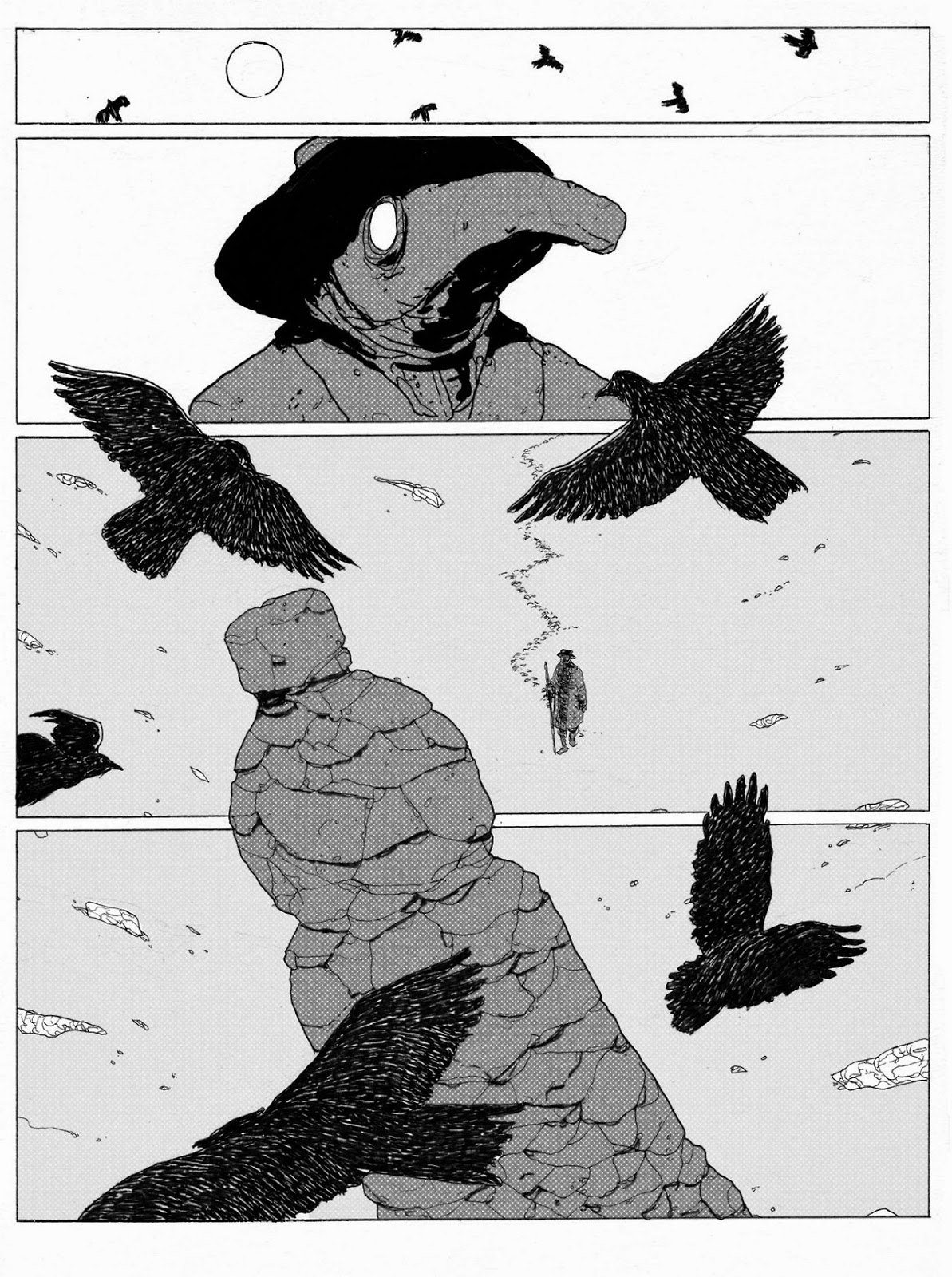