I'm a bit of a sucker for comics that do anything different format/production-wise; even something as simple as a landscape book- as long as the actual comic within is good. You generally find landscapes formats are used for newspaper comics and strip collections: Calvin & Hobbes, Mrs Weber's Omnibus, You're All Just Jealous of My Backpack, Barnaby, Liberty Meadows, etc.  But that's not always the case, and when there is one of those longer books sticking out on the bookshelf in the shop, I like to take a look at it to see what it's doing. I guess at this point, the format is still used by so few, that it stands out. Anyway, for the sake of it, here are five of my favourite landscape format comics. Note favourite, as in personal and subjective, and not 'best!' 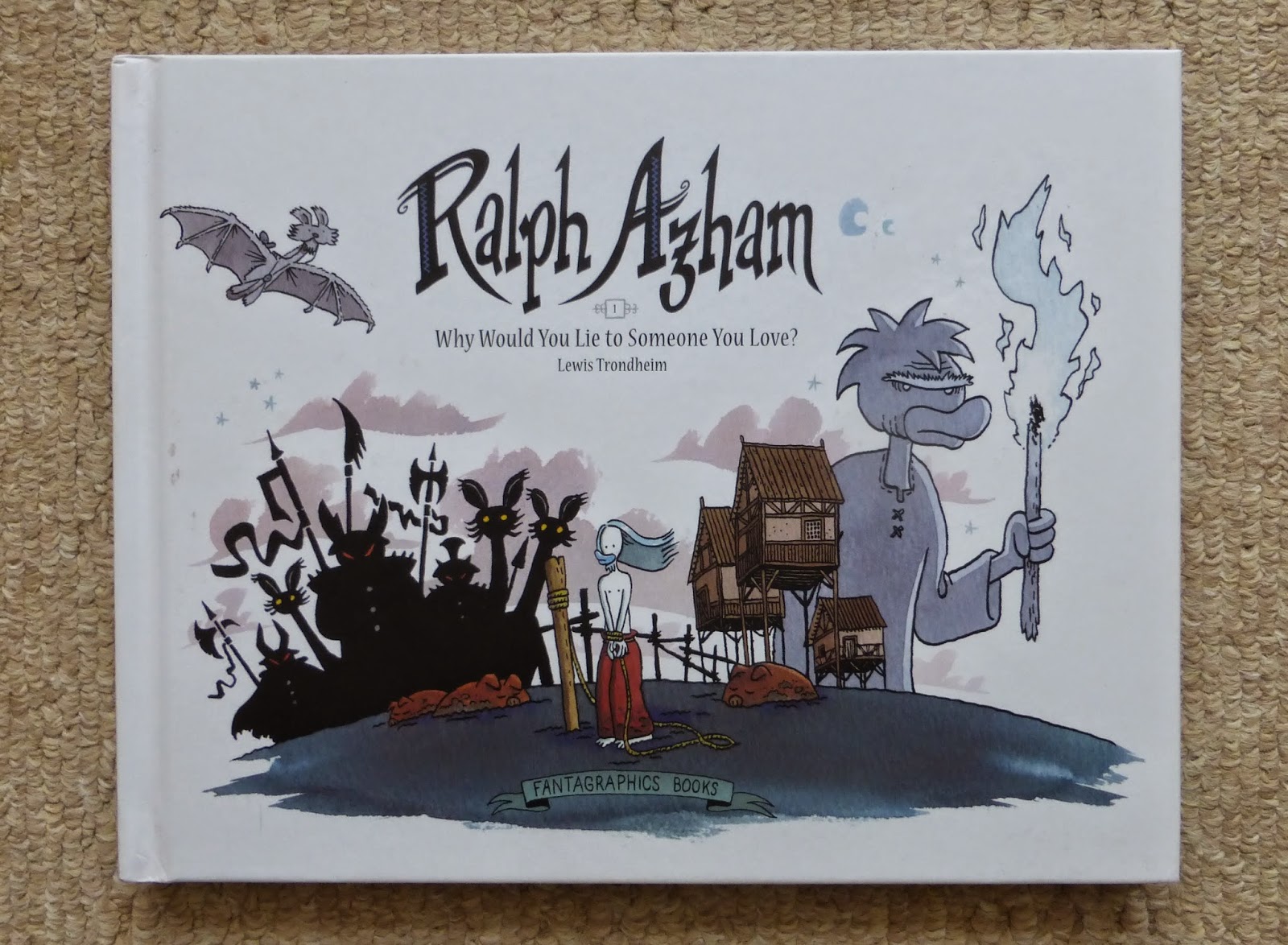 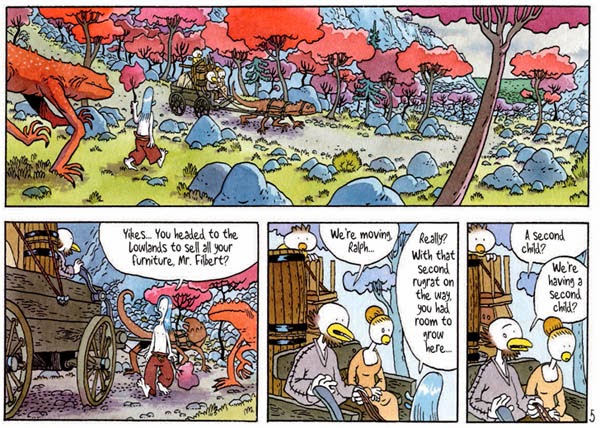 Ralph Azham vol 1: Why Would You Lie To Someone You Love? by Lewis Trondheim, Fantagraphics: I have a confession to make: I'm a bit hot and cold on Lewis Trondheim's work. I really like his style and his mad-cap fantasy bent, but Approximate Continuum Comics, the Little Nothing series while fine,  I can't quite connect with,  as deprecating as Trondheim is about himself and his life. Harum Scarum and McConey is similarly more about 3 blokish mates blundering about together than anything else. I like his kids stuff a lot better- the Monster series, and I love Dungeon- the meatiness of the layered world building there. But my personal favourite, the one in which Trondehim's writing clicked for me is Ralph Azham.

Fantagraphics released this sole translated volume of the series at the end of 2012, and I believe have the rights to more, although production was sadly stalled due to the passing of Kim Thompson who presided over (and translated) much of the foreign rights acquisitions. It's just so fucking funny and sad at the same time; Trondheim nails the measurements of humour, pathos, drama- all of it, perfectly here. Ralph was supposed to be the chosen one, the one who would lead his people out of trouble, but instead he's become the village loser whose only power seems to be telling when people are pregnant and how many children they've had (note: not an endearing power to have). Naturally everyone in the village resents him for it, but there's more going on than they're aware of. I find it interesting that this landscape format seems to be specific to the English language edition- wonder what led to that choice. It works fine, though. 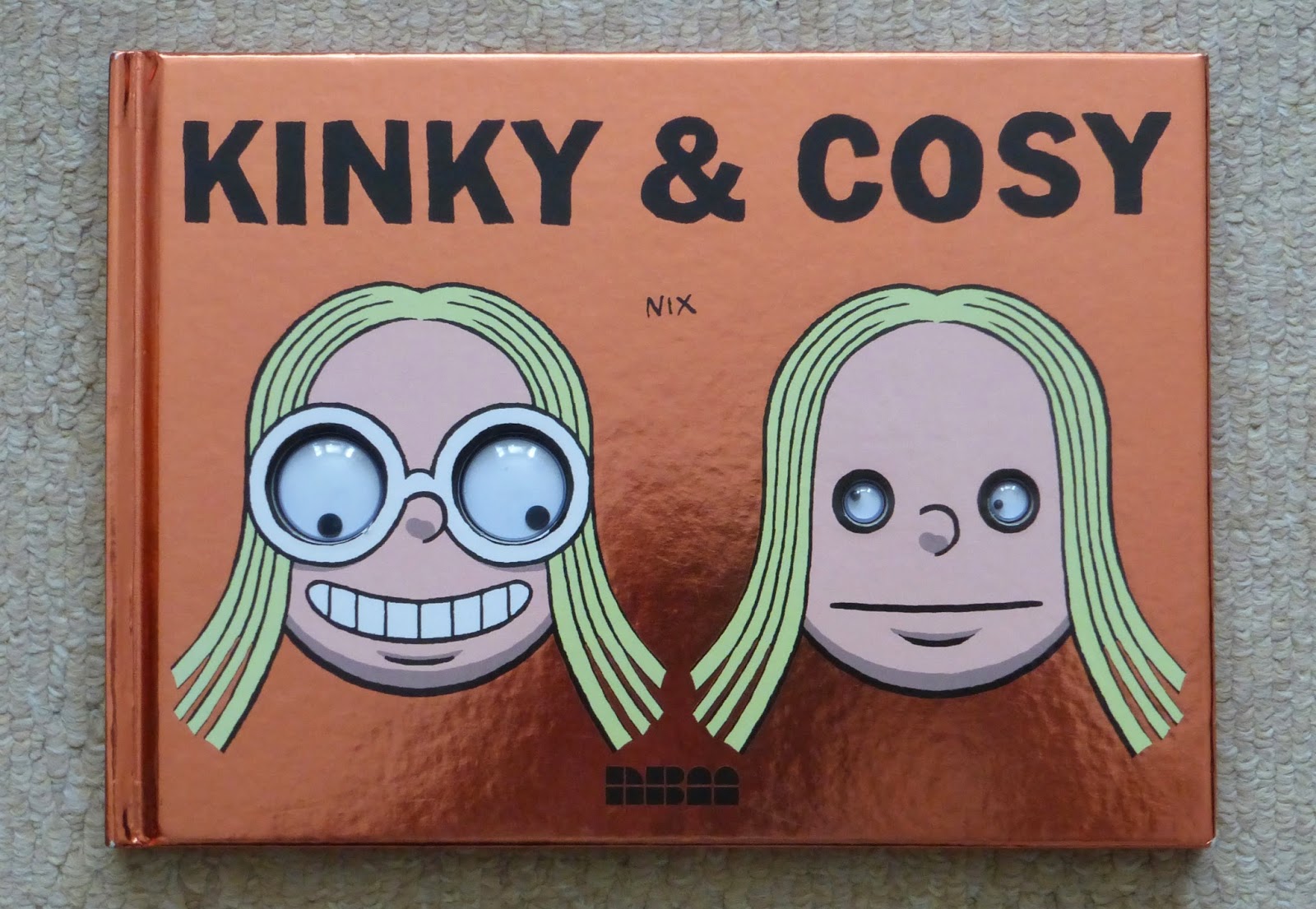 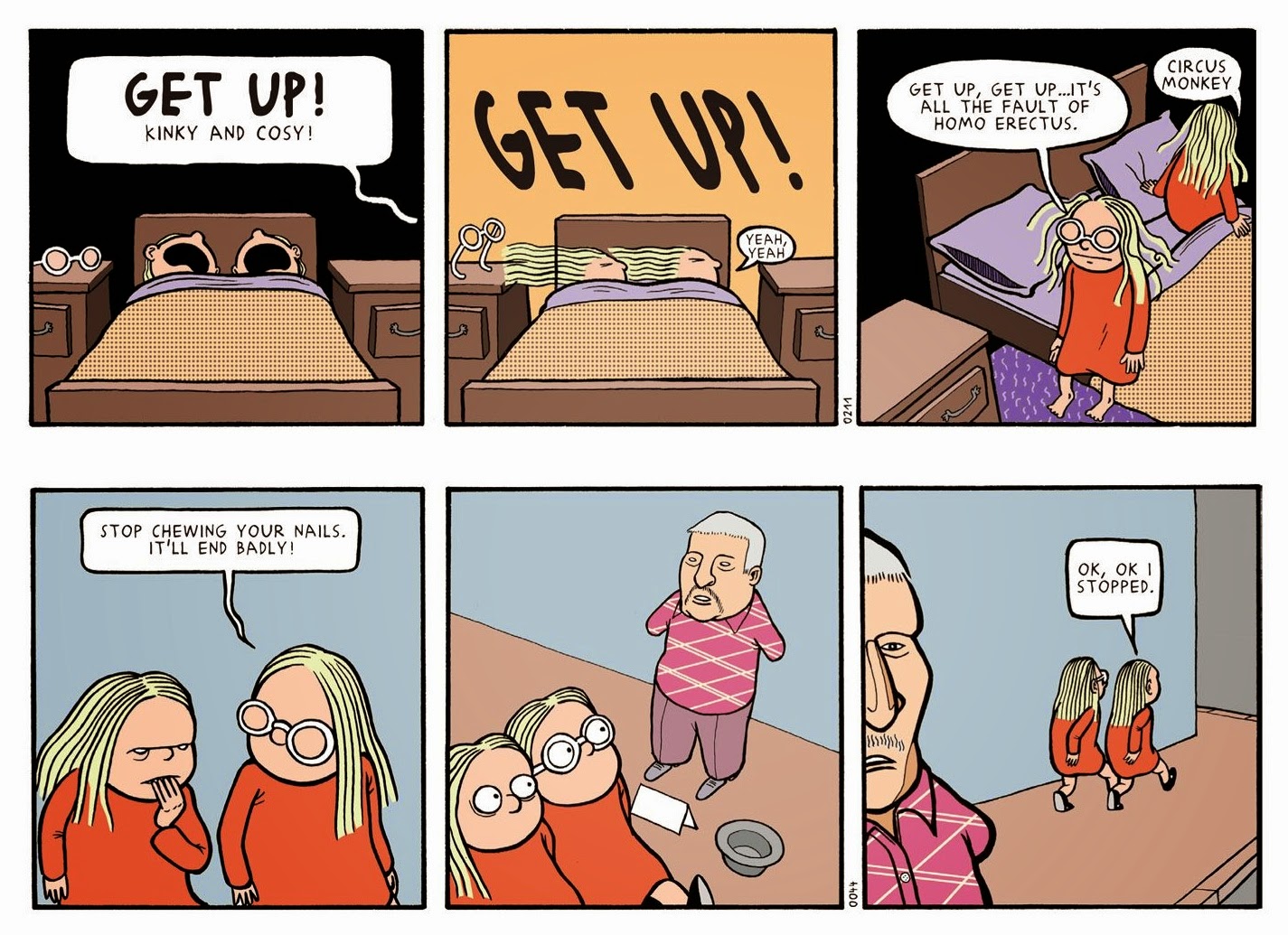 Kinky and Cosy by Nix, NBM: I always come short when trying to articulate what is so special about things I really, really loved (which makes me wonder why I even do this) but Nix's Kinky and Cosy is one of my all-time favourite comics. The strips revolve around the fearsome, awesome twins in red, who alternate between being thick as hell, caustic, beadily-eyed sharp, gross, and childlike, as their long-suffering mother tests a range of vibrators in an attempt to relive some of the stress of having such special children. Between the strips of the gloriously sociopath twins wreaking havoc, you get photo comics of Nix and friends doing prank gags, some of which riff on the inanity of craft and how-to-make programs, while others are simply completely, utterly nonsensical, coupled with dead-pan, black humour brainteaser puzzles which also function as part of the narrative. And there's also title pages featuring a disturbing photograph of Nix in which he dresses up as each of the characters in turn. It sounds like a blathering hot mess, but it works spectacularly. I'm not a fan of puerile humour but even that, when enforced, is so genuinely odd that it plays to the strengths of the book. I think they key to Kinky and Cosy is despite all the utter mad-cap and bizarre antics, it retains a naivety and charm because it feels so sincere with what it's doing, So, so brilliant. I desperately want someone to release an English language translation of his Billy Bob comic. 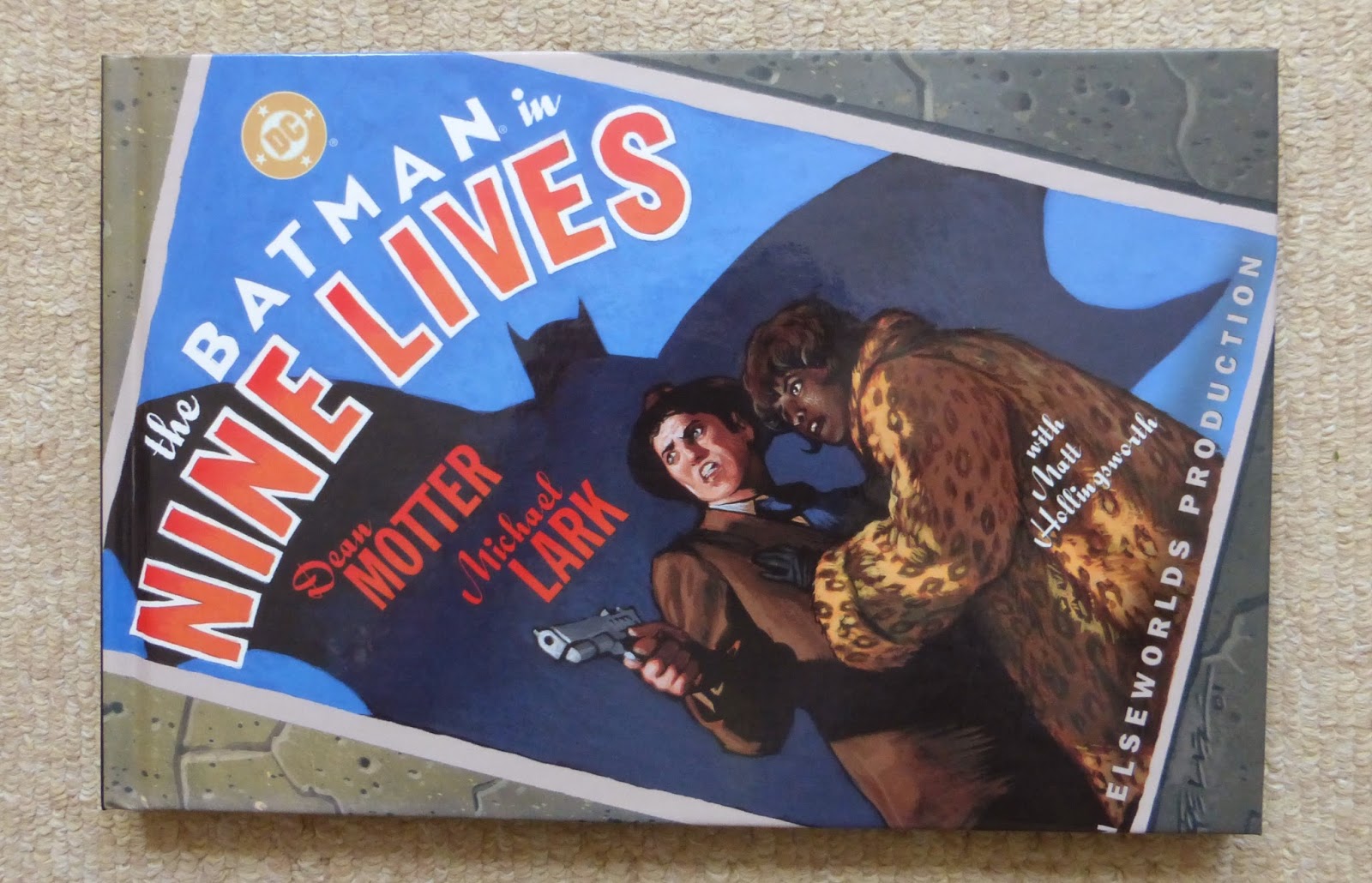 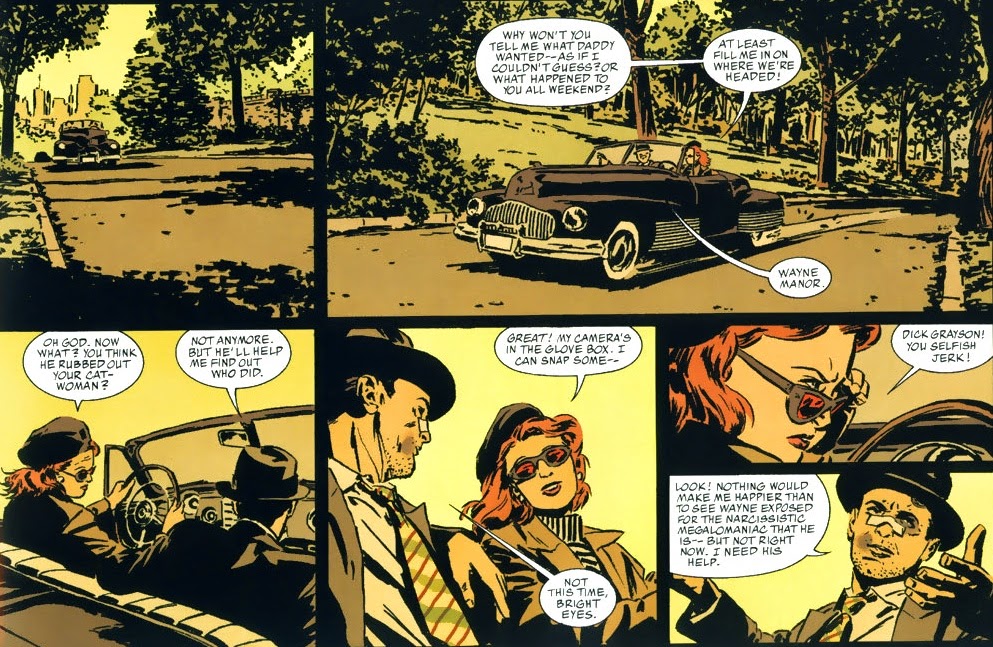 Batman: Nine Lives by Michael Lark and Dean Motter, DC: Nine Lives is an Elseworlds story, which essentially mean shifting characters, roles, time, place and setting- re-imaging them elsewhere- in this case moving the Bat-verse to 1940's Gotham and shooting for a film noir, hard-boiled crime feature. Batman/Bruce Wayne remains as constant as ever, but Dick Grayson takes up the PI role, with Barbara Gordon as his secretary, while the murder of popular crime moll and prostitute Selina Kyle throws light upon a familiar litany of mob bosses and criminal underworld types (though the substitution of Kyle's empowered white, powerful Catwoman to a black woman who is depicted as basically sleeping with anyone and everyone for money is shady as hell). To be honest, it doesn't work- the mystery is weak and uninteresting, and the changes in charcterisation aren't strong or compelling enough to make you care, but Michael Lark does a beautiful job with the art, all shadows and ink, and as a Batman fan, I have a soft spot for Dick's narration and the way he views Bruce here from an outside perspective, coming to know him for who he actually is. There's an amazing car chase-sequence in it, too. It's a shame it's poor because Lark and the format are singing here. 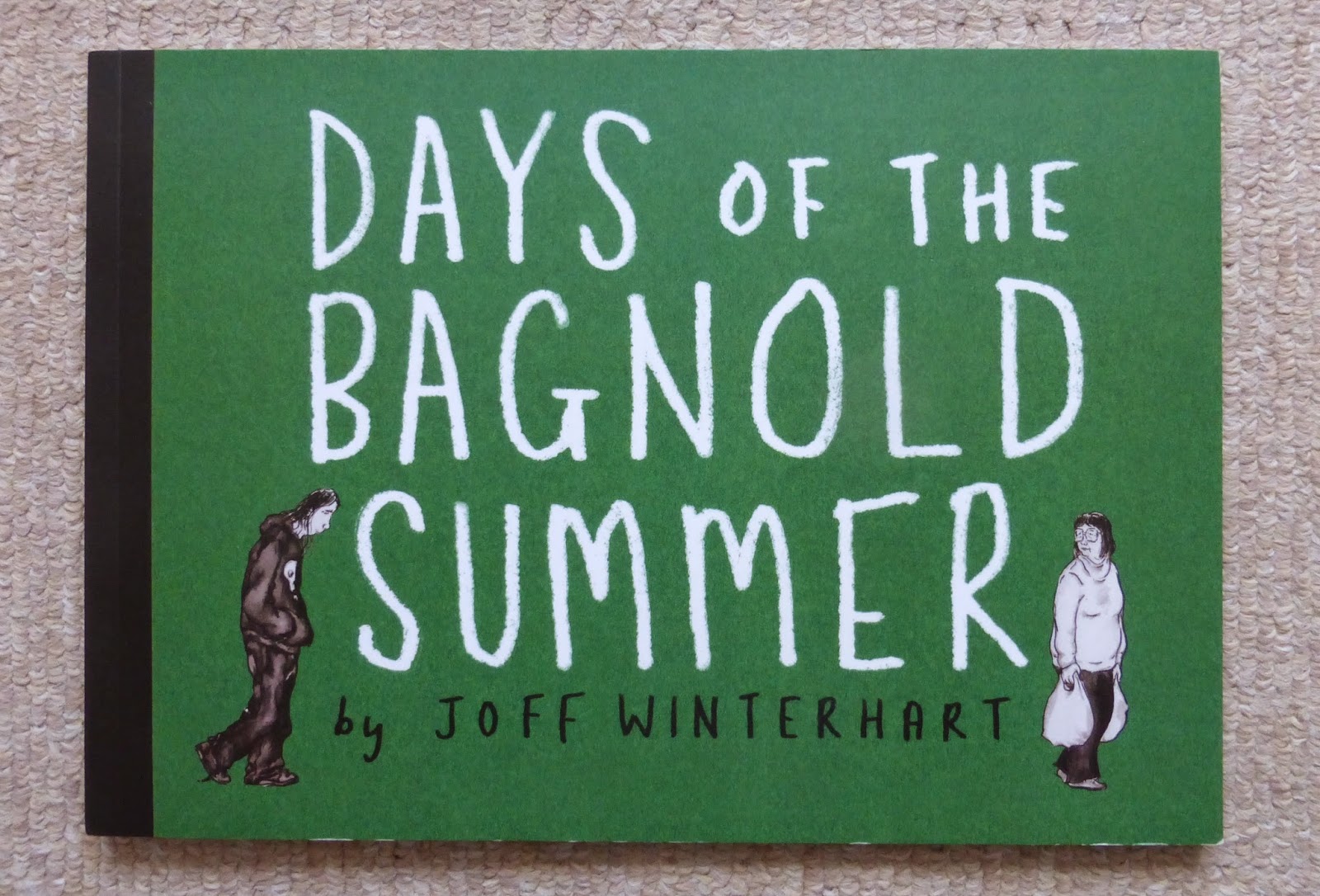 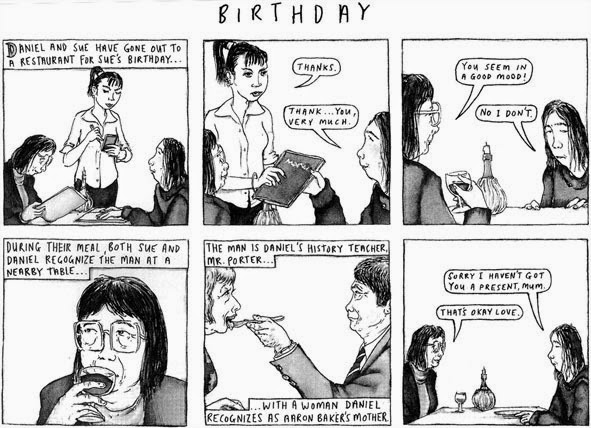 Days of the Bagnold Summer by Joff Winterhart, Jonathan Cape: Bagnold is a very British book: it follows a mother and her teenage son over the six-week summer holiday period, which they're forced to spend together after his plans to go visit his father fall through. It's to Winterhart's immense credit that in quietly celebrating the everyday, he never pities or puffs up his characters; in looks, in personality, in the choices they make: presenting them as close to unvarnished as possible. The series of vignettes is in chronological order, each given a little headed title, as the holiday stretches on and Sue worries about how to better understand and bond with her son, even as he lays in bed thinking up rubbish music lyrics. It could be the most mundane boring comic ever, as nothing much happens, and yet it's sweet and weirdly comforting to see them both sit on the sofa watching crap reality TV shows companionably, or semi-awkwardly eating out. Probably one of the realest, honest books I've read and yet it manages to be hopeful and warm. You can read a full review here. 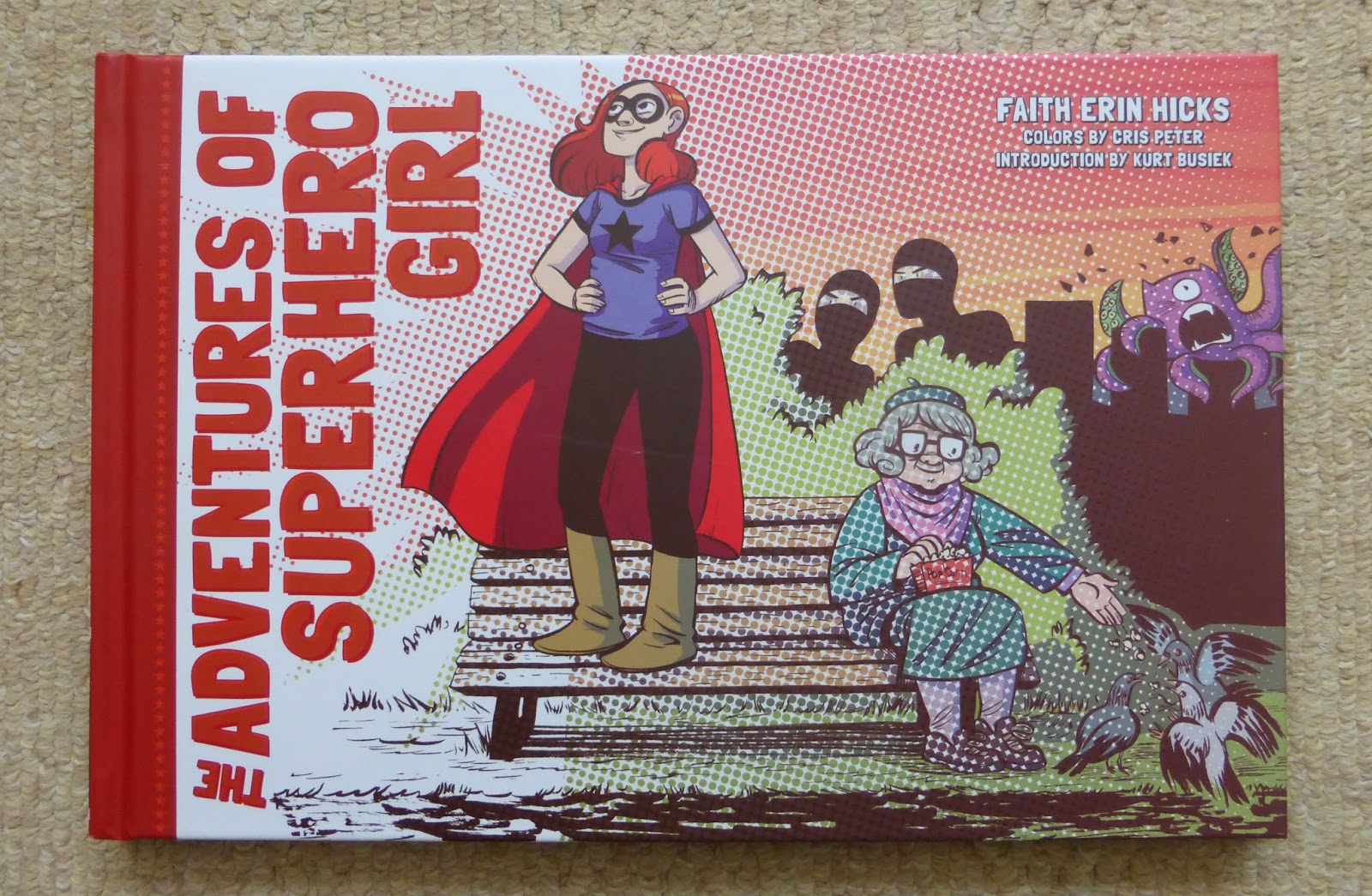 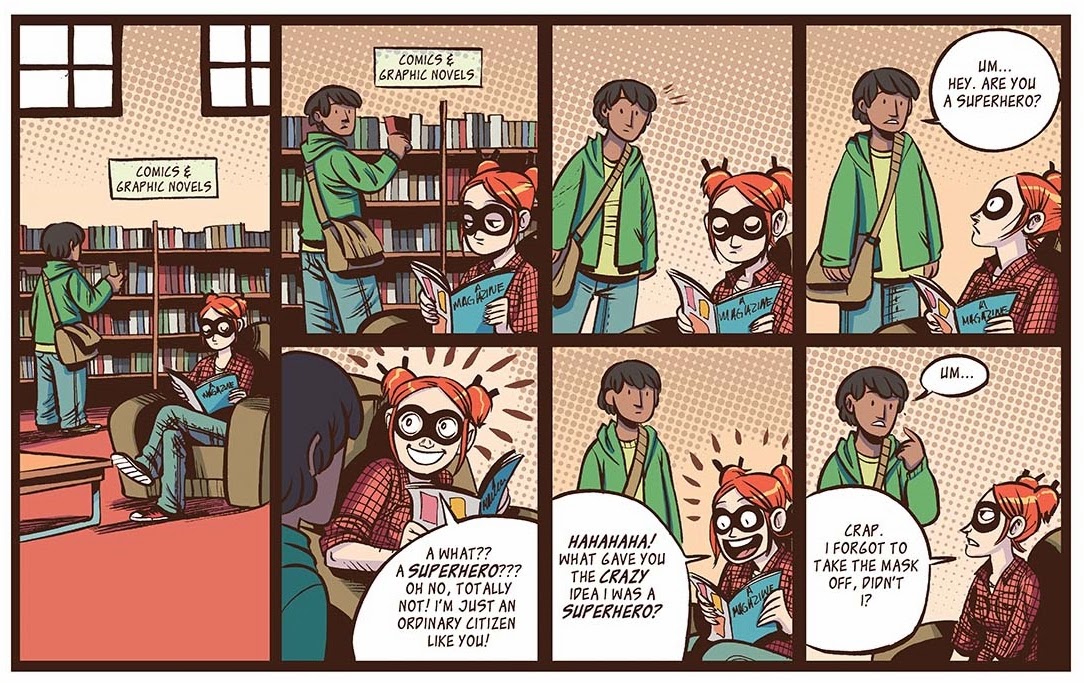 The Adventures of Superhero Girl by Faith Erin Hicks, Dark Horse: I believe Faith Erin Hicks drew these strips as a black and white online comic initially, which were then coloured and collected into a single volume by Dark Horse in 2013. Superhero Girl has moved away from her super family to get some breathing space and decide how best to go about the cape life in a way that suits her. It's a really gentle, fun take and ribbing on the genre, as the realities of heroing are faced: what if there's just not a lot of crime in your area? What if there's a dearth of arch-nemesis? What if your friend wants you to go out to a party and socialise with people? Hicks' comic is smart and funny and suitable for all-ages and the book itself has top-notch production: glossy full-colour pages, with a sketches/bits'n'bobs section in the back. I can see a few people rolling their eyes at a skewy, affectionate capes parody, but when it's done this well, who cares.
Posted by Zainab at 23:45