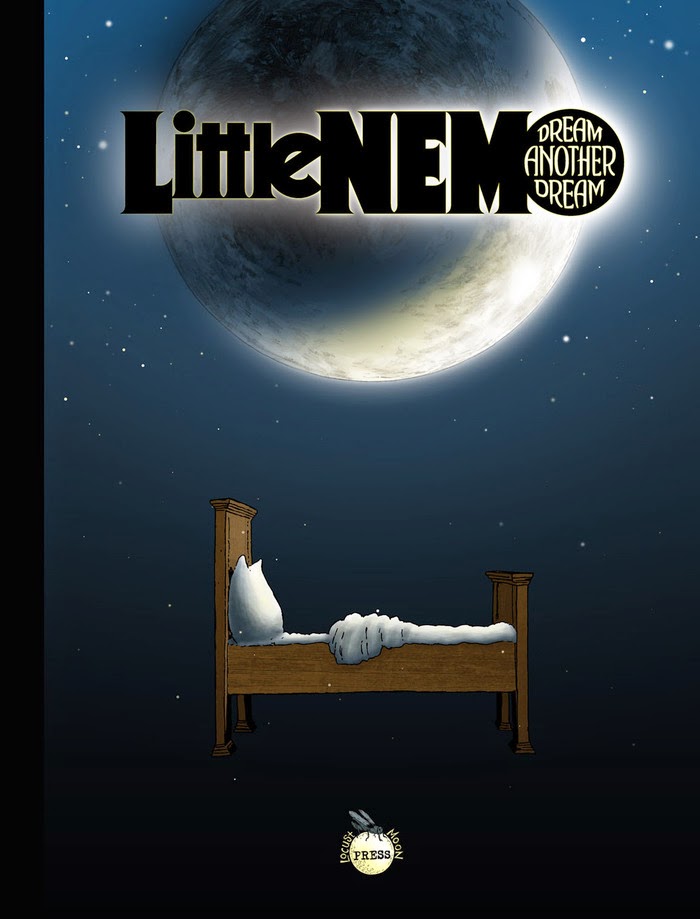 You may remember I wrote about Locust Moon's hugely ambitious Little Nemo tribute anthology back in March earlier this year:

'Little Nemo: Dream Another Dream, a tribute book dedicated to the creator of the Nemo newspaper strips, Windsor McCay. The project will see a dizzying range of comics creators author Nemo by creating their own interpretations of the strip- and when I say dizzying range, I mean over 100 cartoonists including the likes of Mike Allred, Paul Pope, Bill Sienkiewicz, Fábio Moon & Gabriel Bá, Neal Adams, J.H. Williams III, John Cassaday, J.G. Jones, Craig Thompson, David Mack, P. Craig Russell, Yuko Shimizu, Dean Haspiel, Paolo Rivera, Scott Morse, Denis Kitchen, Carla Speed McNei, Peter Bagge, Farel Dalrymple, Brandon Graham- and so many, many more. Locust Moon are aiming to publish the finished product as both a newspaper and a hardcover book at the original, full size format of the Little Nemo broadsheet pages (16″ x 21″), and it's really cool to see people take on something of this magnitude- and something that's a perfect canvas/showcase for print.'

Well, Locust Moon have now taken the project to Kickstarter- the campaign went live about half an hour prior to my writing this, and they're looking to raise $50,000 in order to get the book to print. I got the press release information for this a few days ago, but had been waiting for the Kickstarter to go live so I could link to it. I'm not going to lie- $150 for a copy of the book is a steep price- a lot of money, but one I've paid for two reasons. The first is- I think this is exactly the kind of projects and comics that are perfectly suited to crowd-funding, specialised: huge, over-sized, full colour, newsprint hardcover- and that roster of names is inarguable. It's the kind of book that just couldn't be replicated anywhere near as equally in a digital version, one that reminds you of the unique physicality of print. Second: I've been lucky enough to see most of this in PDF format and it took my breath away on screen- I can't image what it will look like in print, in that gorgeous large format. There's a preview of some of the art and comics on the campaign page, and if you keep an eye on it, I'm sure more will follow. Even if you're not after, or can't afford, the book, there's a variety of prints and other rewards also on offer that are worth a look.

'The contents of the book, assembled over the past two years, are now complete. The deal with the printer is in place, and the Kickstarter campaign, to be launched on 6/23/2014, will go directly to cover printing costs, for a limited release in the fall of 2014, and national distribution in the spring of 2015. Locust Moon is inviting fans of art, illustration, and beauty of all kinds to get involved in this literal and figurative dream project: a love song for Winsor McCay, Little Nemo, and the limitless possibilities of comics.'

You can find the Little Nemo Kickstarter campaign here. 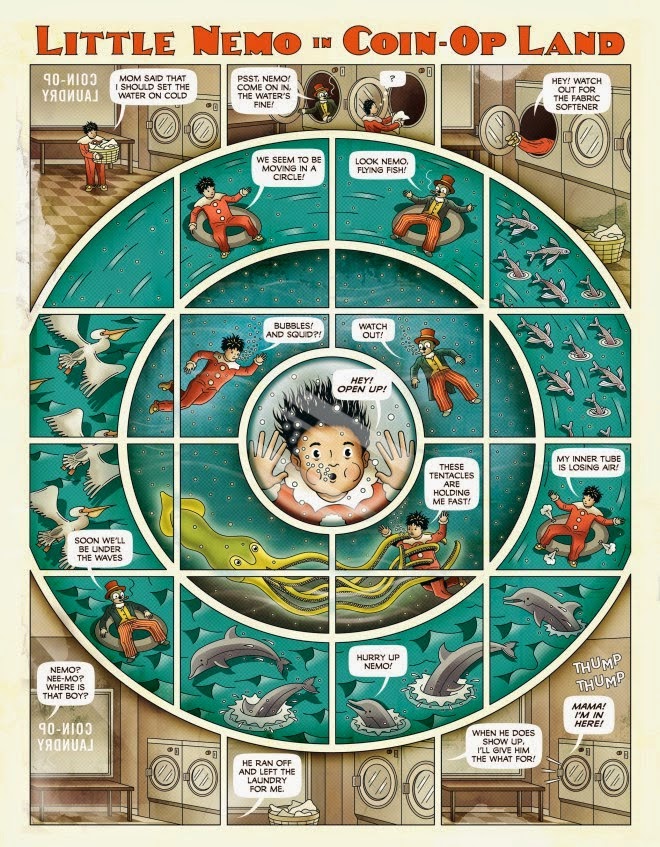 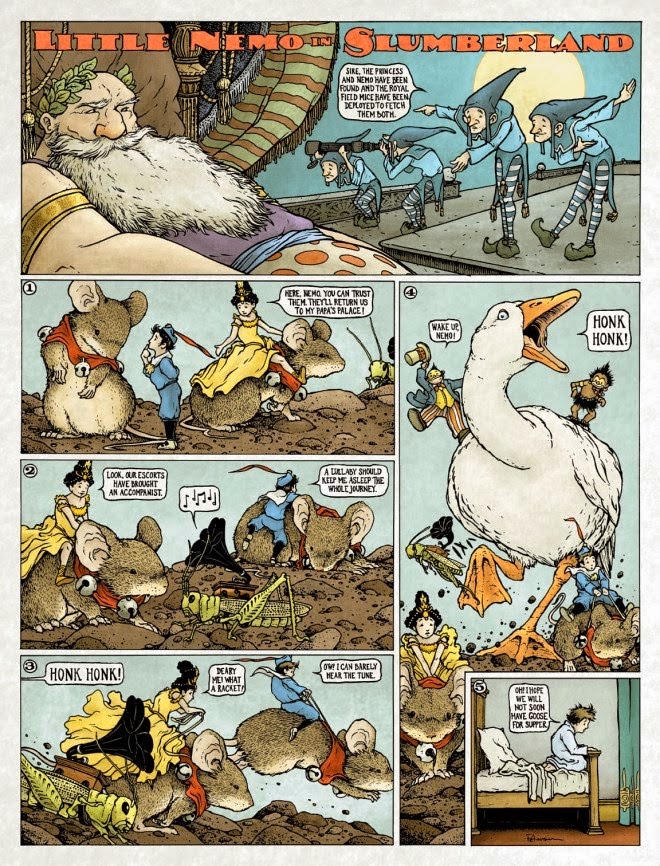 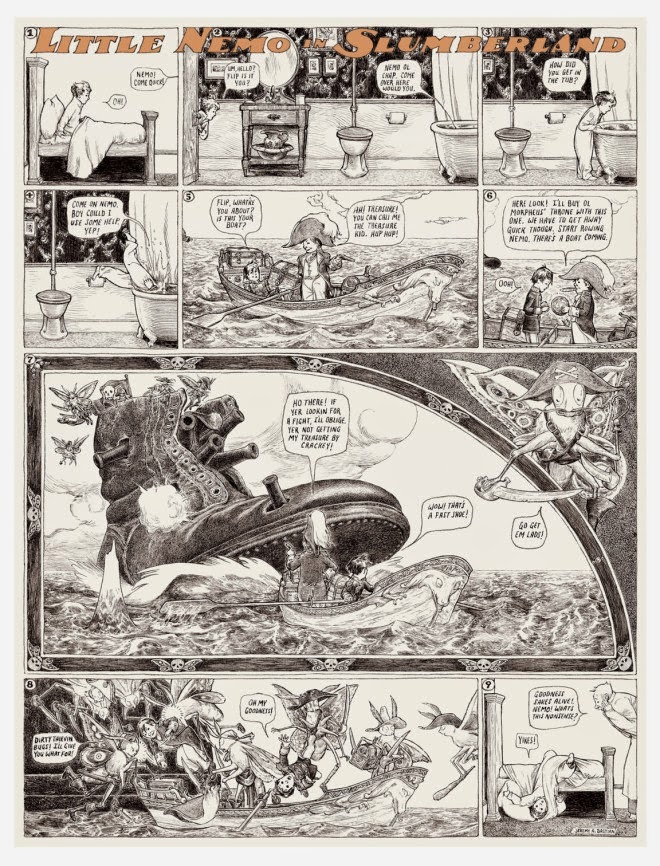 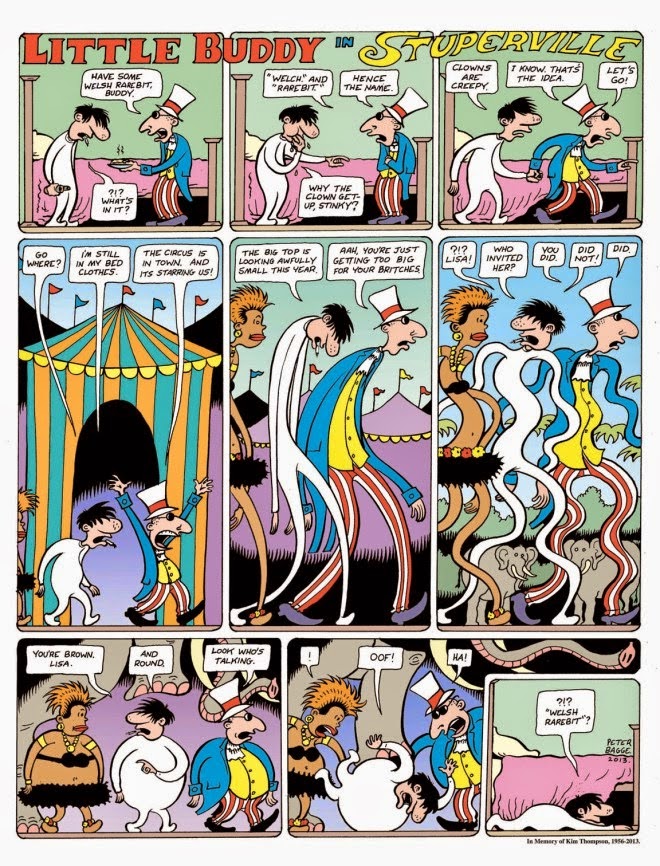