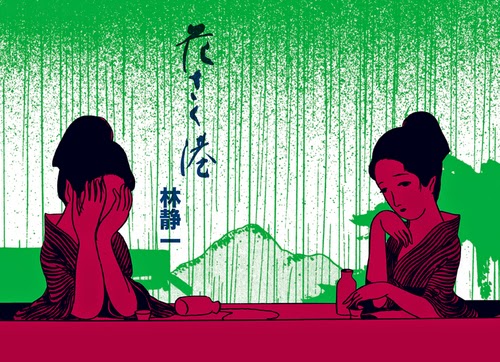 Sometimes news is made all the more pleasant because it's unexpected. I have to confess, after PictureBox closed its doors, it seemed unlikely we would be getting anymore English language editions of alternative, experimental Japanese comics artist, Seiichi Hayashi; the publisher was the first to translate his work with Red Coloured Elegy and subsequently, Gold Pollen and Other Stories. However, British comics imprint, Breakdown Press, announced yesterday that they would be publishing a translation of Hayashi's 1969 'blues manga,' Flowering Harbour, as the first in a series of translations of classic and avant garde Japanese comics. Described as 'a love story filtered through the aesthetics of enka music, known informally as “Japanese blues” ' Flowering Harbour will launch at the Japan Foundation on July 1st, with London's Gosh Comics hosting a special event to celebrate the book's publication, which will see Hayashi in attendance, discussing and playing the songs that influenced his work, along with manga scholar and translator Ryan Holmberg. Holmberg will be working with Breakdown on the series of translations, in a similar capacity and role as he held at PictureBox.

It's immensely pleasing -and exciting- to see the landscape of British comics develop in this way. Breakdown Press, founded by Tom Oldham and Simon Hacking with the assistance of Joe Kessler, have been incredibly enriching to the scene since their founding only last year, releasing work by French comics artists Antoine Cosse, and the superb Connor Willumsen, along with impressive work by Kessler, and this announcement consolidates their intentions to continue in that vein, and marks them as ones to keep a firm eye on. I think they're exactly what UK comics needs right now: quality, diverse work leaning more towards the experimental that can work to refresh, inform and influence others.

If you're unfamiliar with Seiichi Hayashi and his work, Gosh! have provided a succinct biography:

'For those of us who are less familiar with Hayashi’s impressive resume; he’s an award-winning multi-disciplinary artist who, after beginning his career as an animator at Tōei Studios in 1962, became a leading figure in the vibrant avant-garde cultural scene of late 1960s and early 1970s Tokyo. As a regular contributor to the legendary alternative manga magazine Garo, Hayashi became renowned for pioneering new territory in the medium of comics, with stories ranging from allegorical critiques of postwar Americanisation and the Vietnam War, to touching reflections on motherhood inspired by Japanese woodblock prints and pop music. Hayashi is perhaps best known for his graphic novel masterpiece Red Coloured Elegy (Sekishoku Erejii, 1970-71) and his distinctive character designs for Lotte Koume (Little Plum) candy drops, which debuted in 1974; his images of a young girl in kimono still grace the candy’s packaging today.'
Posted by Zainab at 12:31