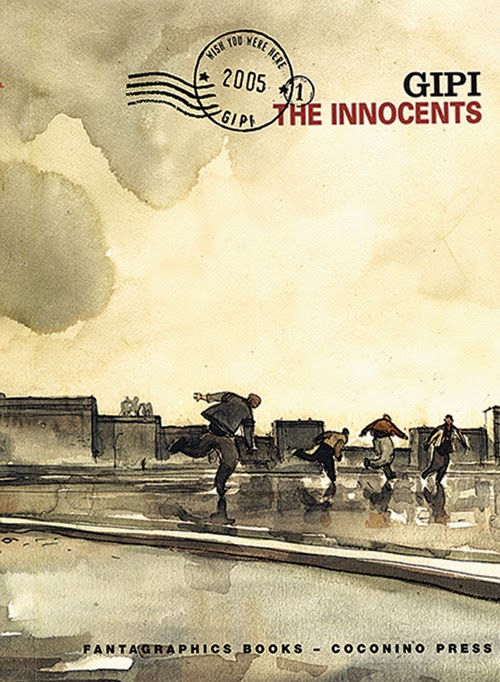 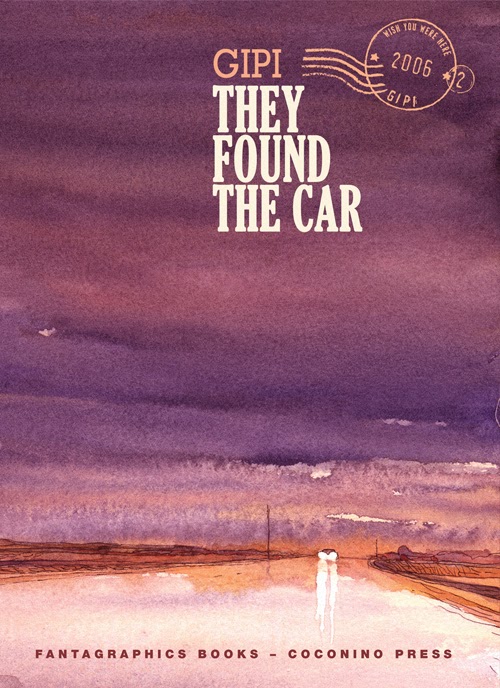 There's not much Gipi published in English- two books by First Second: Garage Band and Notes on a War story, and these two out of print, 'wish you were here' A4-sized books- The Innocents, and They Found the Car, published in 2005 and 2006 respectively, as a collaboration between Italian publishing imprint Coconino Press and Fantagraphics. You can currently find copies for the stately sum of £3000 upwards on Amazon and the like, or you can do what I did and 'borrow' them from a friend, and then un/subtly badger him until he lets you keep them (yay! Thanks, Oliver). However, I'm not only here to be a little bit smug, what I really want is to talk briefly about crime and cars and movement and time and so forth in these two books that read so well as a diptych. I have been thinking a lot recently about what comics do that other mediums cannot, and these books seem a good place to explore some of that.

Superficially, both narratives appear similar: in each, the male protagonist is jerked from his present life by a person and event from the past, yet the manner in which they play out can almost be read as a two-hander- a tale of youthful folly turned tragedy, and a weathered, measured tale of cold survival and the lack of honour amongst thieves- a song of innocence,and a song of experience. The Innocents takes its cue from its title; a man, in his mid 30's drives a car along a long stretch of road, his young nephew of about 9 in the passenger seat. They banter and josh- and the boy convinces his uncle to tell him about the man they are going to meet- this friend who has called him up for help after years of silence. Gipi interjects the conversation here with the landscape passing outside: page-wide panel of the ocean and sky, 2 panels of conversation, another wide panel of smoking buildings and hills. It seems to be very early in the morning, the sun marbles light through the clouds- Gipi's watercolours are clear, almost golden. He establishes a calm, serenic tone, the comforting hum and rhythm of the car as it unhurriedly travels towards its destination. As the man begins narrating his tale, Gipi gets rid of the watercolour, stripping away any colour and effects, leaving only the indelible marks of black pen, spindly, but stark against the rich cream of the page.

The story is a sorry one, as teens, the man and his best friend, Valerio, find their town suddenly occupied by a burly police presence after a terrorist shooting of an officer. The boys are constantly harassed by a couple of nasty, corrupt specimens of police- who one day take things further and pull them both in, beating and questioning them. The man they let go, but Valerio they keep overnight, and when the man next sees him he is a changed person: violent and moody, looking for aggravation. A few weeks later, once again finding himself picked up by the same officers, he sends his waiting knife home in the policeman's shoulder and is jailed for 12 years. It is Valerio the boy and his uncle are going to pick up now on his release from prison. 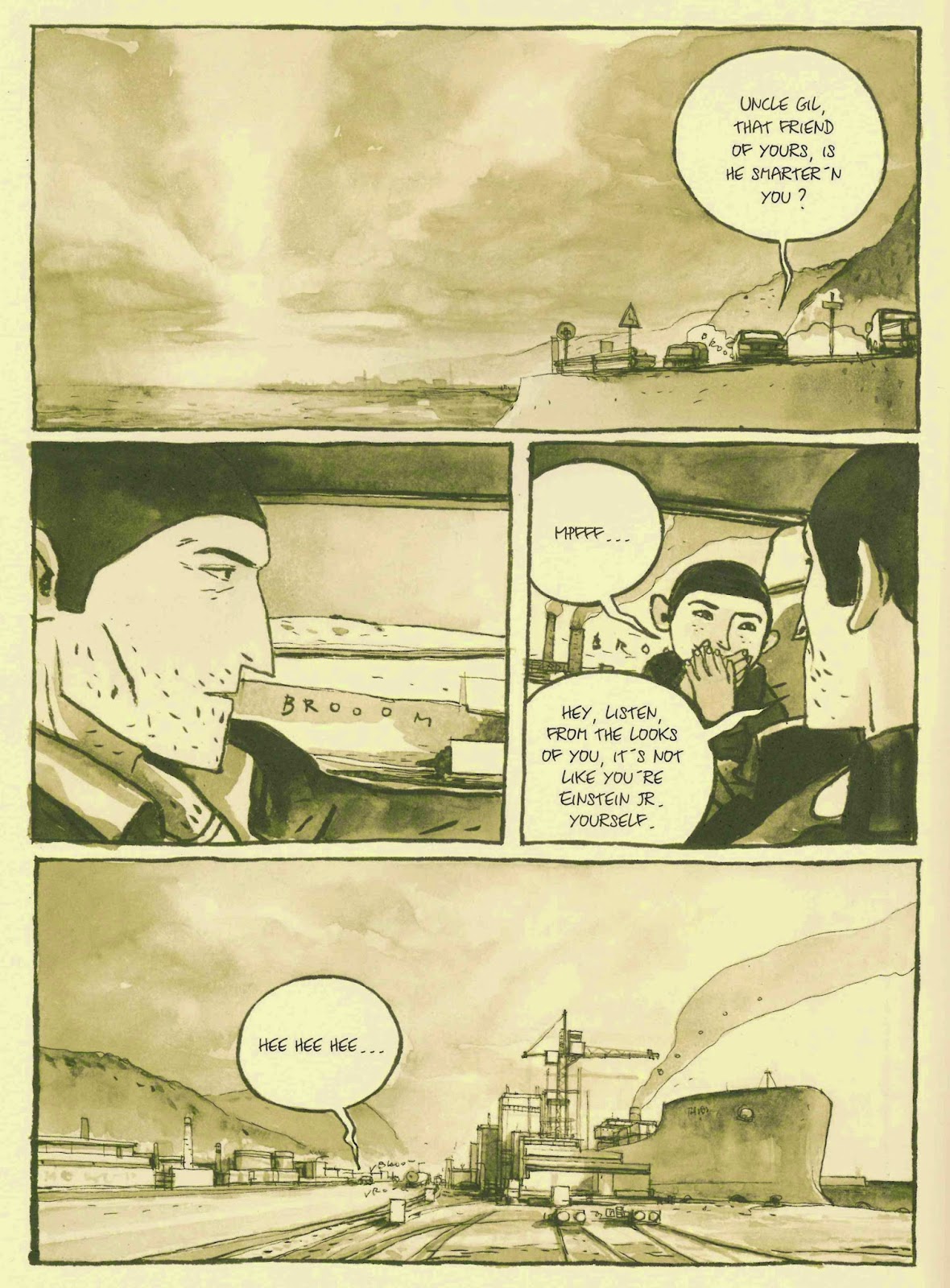 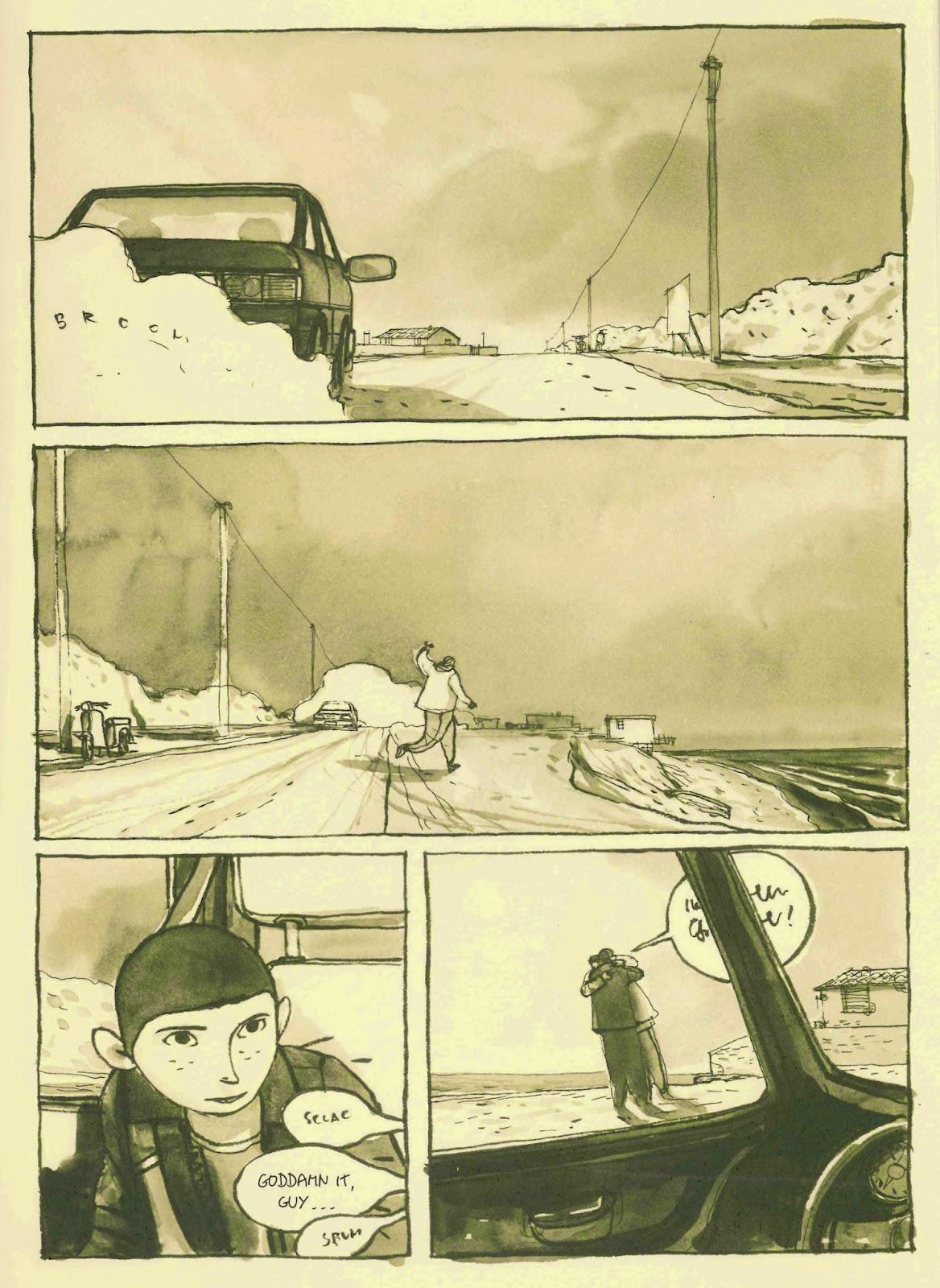 As the car comes to a halt, we get another two wide, open panels, the second in which Valerio is waving to flag them down. There's no tension, no animosity, no sense of threat, even as the boy leans forward, wide-eyed and curious, to see the old friends hugging heartily. And quickly the reason for meeting becomes clear- this is the location of one of the police officers that put Valerio in jail and he has revenge on the mind. But nothing comes of it- the house they visit is empty and Valerio, a non-threatening haggard, unkempt figure in baggy hoodie, kicks at some pots. While the presence of the boy  is a  visible reminder of 'innocence', Valerio, too, is an innocent in grip of an arrested teen-hood of sorts (despite prison)- his plot for revenge impulsive and ill-thought out, his rage child-like in it's single-mindedness and the ease with which his pent-up emotions dissipate once released. There's no real intent behind his actions. Gipi closes the book with an image of the 3 stood on the beach sharing a cocoa banana flash-bang (a chocolate treat), all three equal in their enjoyment, again the simplicity of the pleasure taken is absolute and child-like- it is children who are placated with sweets and treats.

From the outset, Gipi places Valerio to be viewed sympathetically even as the reader is told his story through the eyes of his best friend who in turn portrays him  as victim and not perpetrator. The 'crime' in The Innocents (note the defintiveness of that title) isn't Valerio's, but that of bent police officers; Valerio is a product of abuse by political authority, his actions a direct result  of external circumstances and environment. That positioning, and the meandering, dawning car journey spliced with beautiful scenes of passing ocean, buildings, mountains, open road set the tone for the narrative- and thus at no point do you feel unsettled or uncomfortable- wary of what's about to happen, or of Valerio. Subject matter aside, it's hazy and nostalgic- almost road-trip-like in trope. 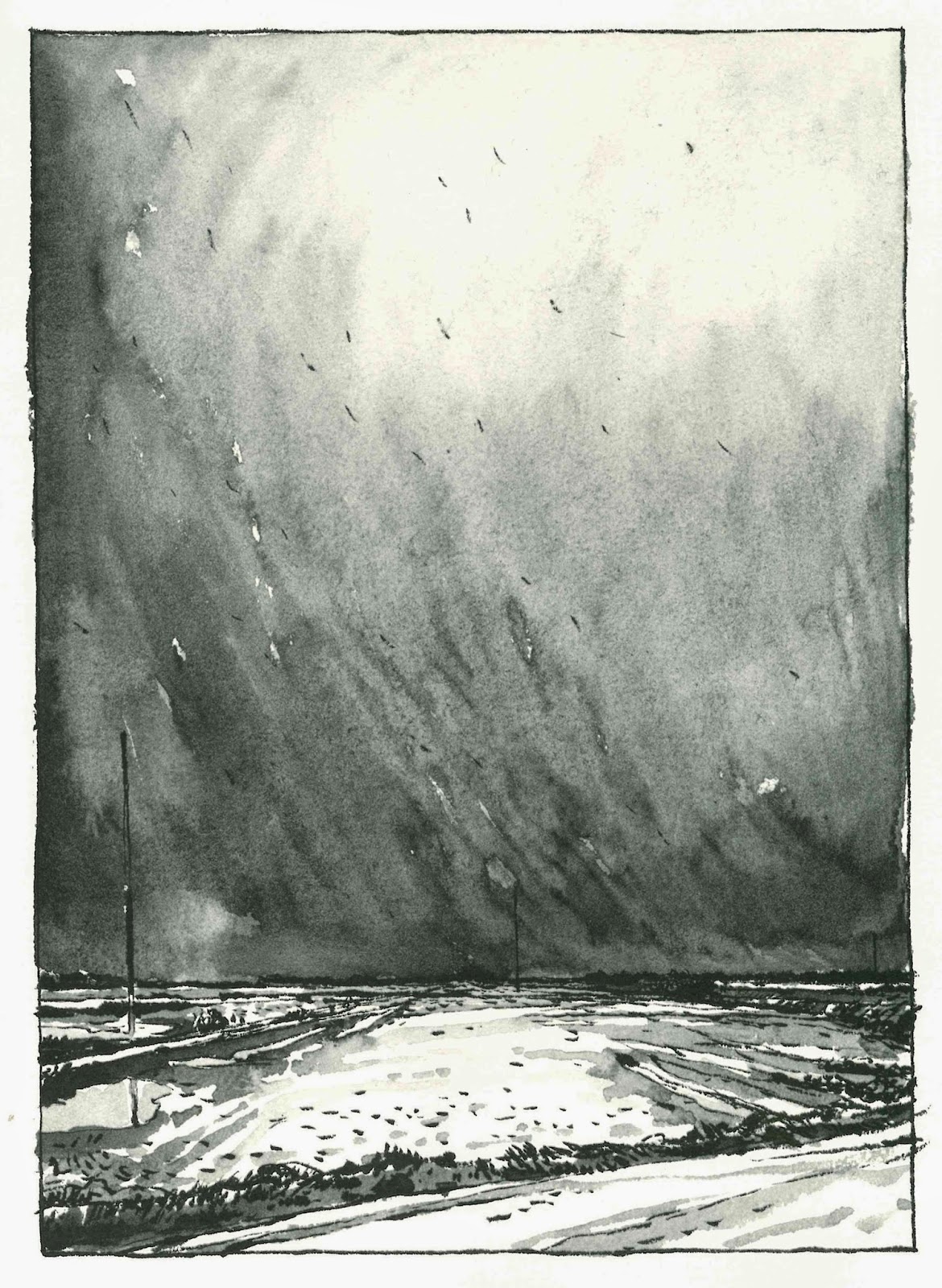 With They Found the Car there's an instant immediacy and sense of urgency, an ominous quality that radiates from the title alone- the phrase dredges up all manner of connotations- a hidden car- why would you hide a car? unless you've been involved in unsavoury activities to say the least, and the reappearance of said car, the potential of discovery, of an awful secret being unveiled, of consequence. Even the cover shows a heavy, looming purple sky, the paint bleeding into the red-streaked horizon. They Found the Car is much more noirish- Gipi lashes it in rain and dark blues and gray washes- the pathetic fallacy of the howling wind and storm as a man is awoken by a phone-call in the middle of the night: 'They found the car.' And then getting dressed and being picked up by his smoking, curly-haired co-conspirator, as they drive to visit another man, to ensure the secret remains contained. The car here is rarely seen whole, instead we get tight interior shots- uneasy, foreboding panels of watchful eyes in rear-view mirrors, the atmosphere tense. The smooth, winding journey of The Innocents is in sharp contrast to the vehicle here: not only is the car the catalytic object which has triggered this turn of events, this second car is now a harbinger of death, its occupants poised and plotting, bought together by necessity. In both books, the movement of the car mirrors that of the narrative, with Gipi using it as a literal and figurative vehicle:, the first ride is long and generally seamless, spanning the tale of youth and returning to the present, while the second is a jagged, stop/start journey, that doesn't allow for a rhythm, or predictability.

They drive to the third man's house and the curly-haired man shoots him quickly. The man- ostensibly the protagonist, the one Gipi has opened with, and has been woken, is rather belatedly shocked 'You asshole. I thought I'd seen that kind of thing for the last time.' But he isn't really that  moved. He knows the purpose of this journey- knew it from the phone-call and knows where it is all leading. That's the key difference between the books: They Found the Car is all about knowing, about deliberation, planning and thought: premeditation. The Innocents saw things happen to it's characters -or to Valerio- things beyond their control and actions that were directly derivative from that, so the culpability there is passed on to the policemen who instigated that chain. Here, the men are the instigators, the do-ers, and are responsible and guilty for their own actions. Although not much is revealed to the reader about the first incident which led to the concealment of the car, the second, in which the two men kill the third of their group who they had gone to visit, leaves little room for doubt as to their culpability. The third is perhaps the most damning: it indicates that the man has been scheming and planning from the moment he received the phone-call, revealing his perhaps justified suspicions about his curly-haired companion, and the level-headed, calculated manner in which he is able to make decisions about murder. 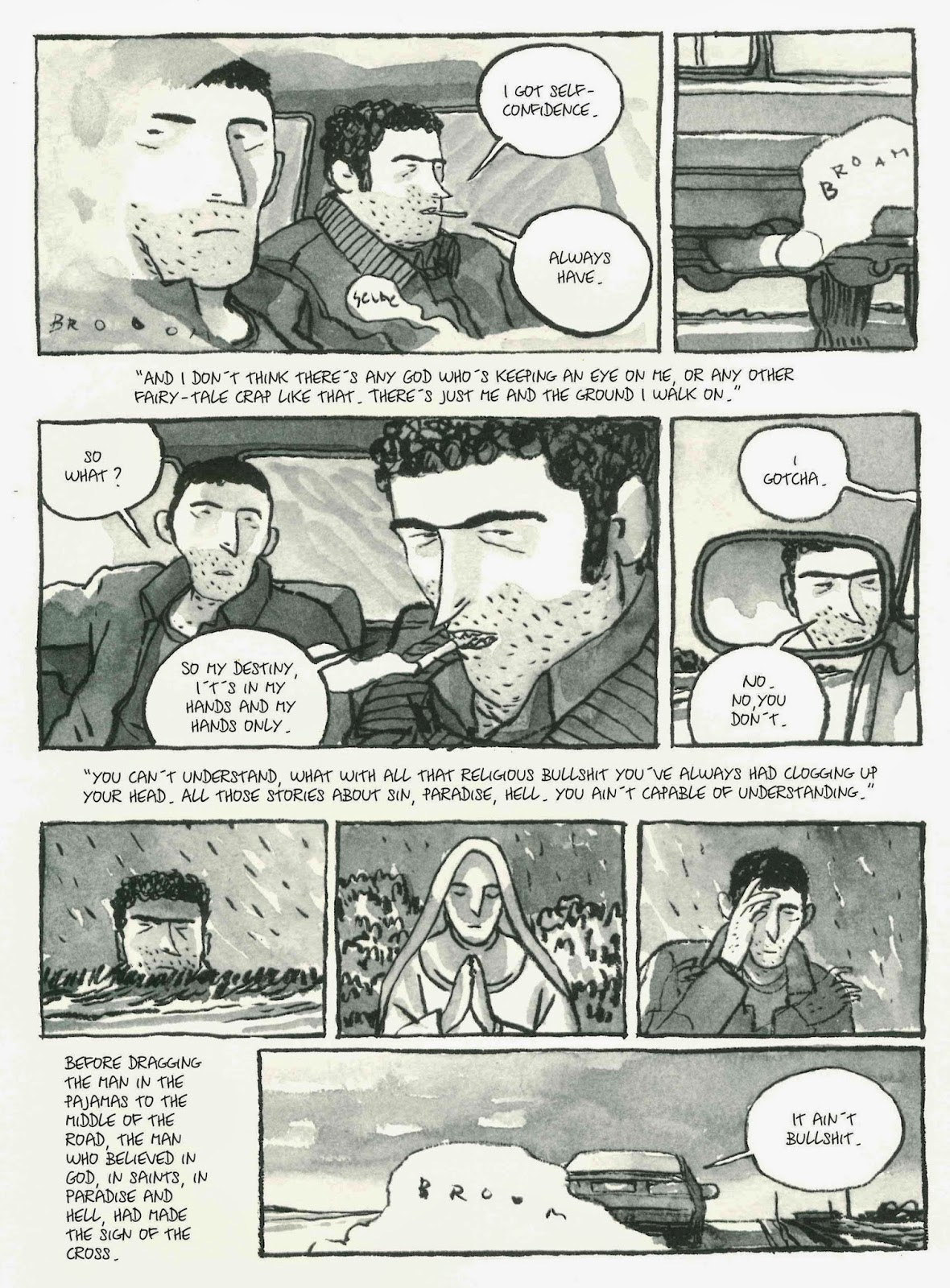 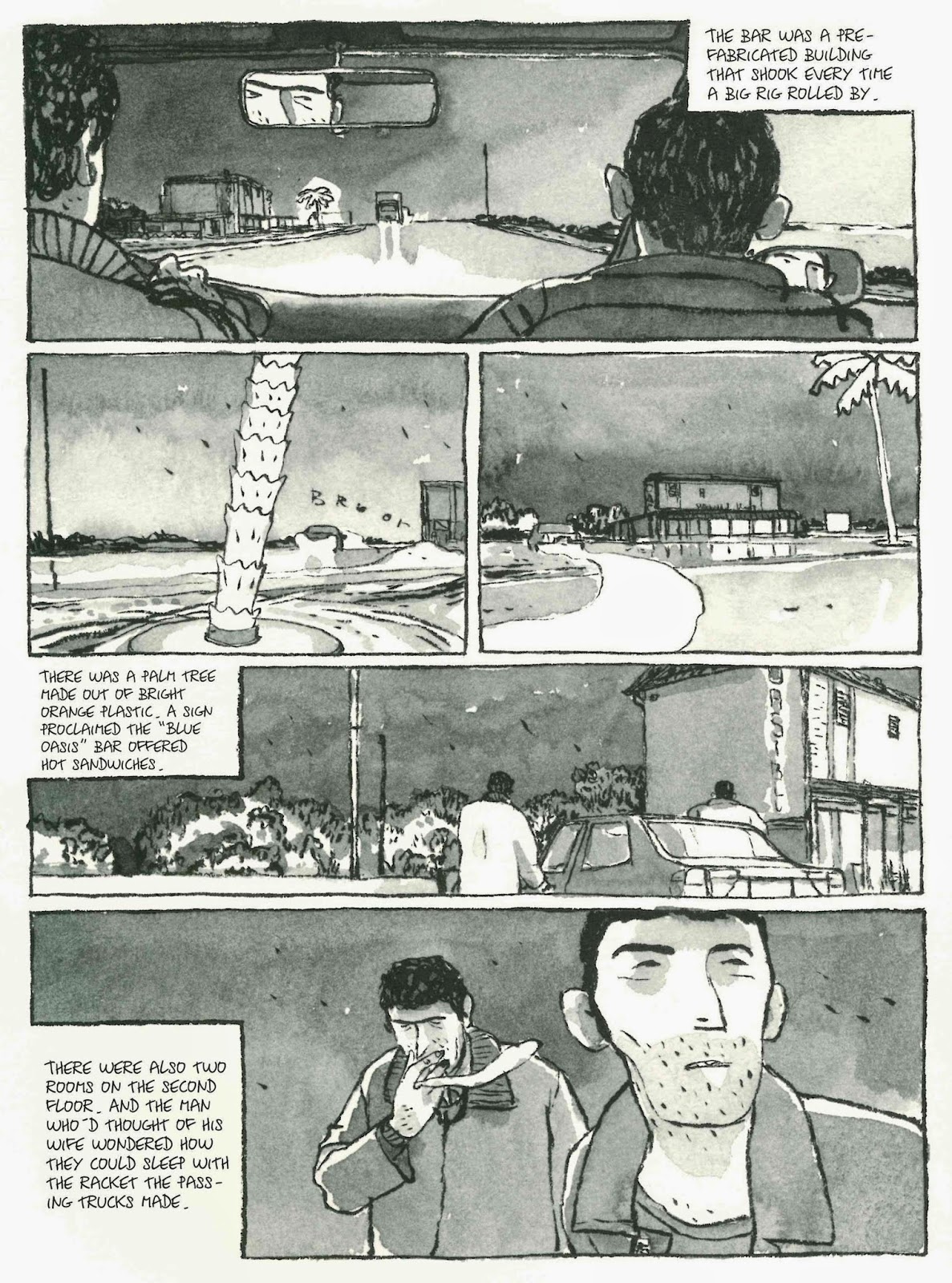 There is probably no such thing as the 'good guy' but it's natural for the reader to side with the introductory character whose arc we follow, and against the interloper- here Curly- yet both men in They Found the Car are framed as dangerous and malevolent: Gipi giving them sharp noses, pointy triangles of teeth, eyes that always seem to be looking at you sideways; Curly's eyebrows regularly drawing together in a thick black unibrow. Curly might be the disturber of the peace, but it's rapidly apparent that 'our' man is equally vicious- if not more so. Where the dialogue in Innocents is sparse and straightforward, here it's much more dense as the two men try parry verbally, cloaking and layering meaning, with the addition of an omniscient narrator providing further substance- the pithy intonation of which reinforces the crime noir tradition- 'The man at the door had dragged the guy in the pajamas to the middle of the road. "Damn you!" he'd screamed at him, "You made me take the Lord's name in vain!" Meanwhile, in the field, the severed head had reappeared.'

Gipi throws in religion here, as the two men debate about God and conscience, but who is worse: the man with a conscience by way of religion who kills, feels some semblance of guilt, and hopes he is forgiven, or the man who kills and takes his actions for his own, with no attribution or retribution from any alleged higher power. No one is innocent here, as much as the man clings to religion as a purifier, as a vessel for the restoration of his innocence as a moral harness. When the man wavers from shooting Curly, it's his beliefs that are used against him as Curly assures him that this action is a mortal sin and will guarantee him a place in hell. He can't go through with it, but it doesn't make him good, it makes him stupid: there's no scenario in which Curly won't kill him if he doesn't shoot him now. It's his wife who pulls the trigger, although she assures him there's no need to dwell on what they've done: 'I know in my heart that God has already forgiven me.'

Increasingly it seems to me what comics can do uniquely is examine the momentary and nuanced unlike any other medium, to be very present, and what Gipi does is strings together a number of these moments to create two narratives with similar premises that fork out in very different ways, but both with swells and turns and beats of emotion: one almost languorous, one more strident, using time and weather to great effect. His watercolours play into those moods: it has a peculiar, chameleon-like quality that seems to shift and change, taking on the attribute and direction of the narrative. They're superb works which can be read as a parlay on the nature of man: what he is, how he becomes, what he gets, what he deserves, and whether any of it means anything at all. 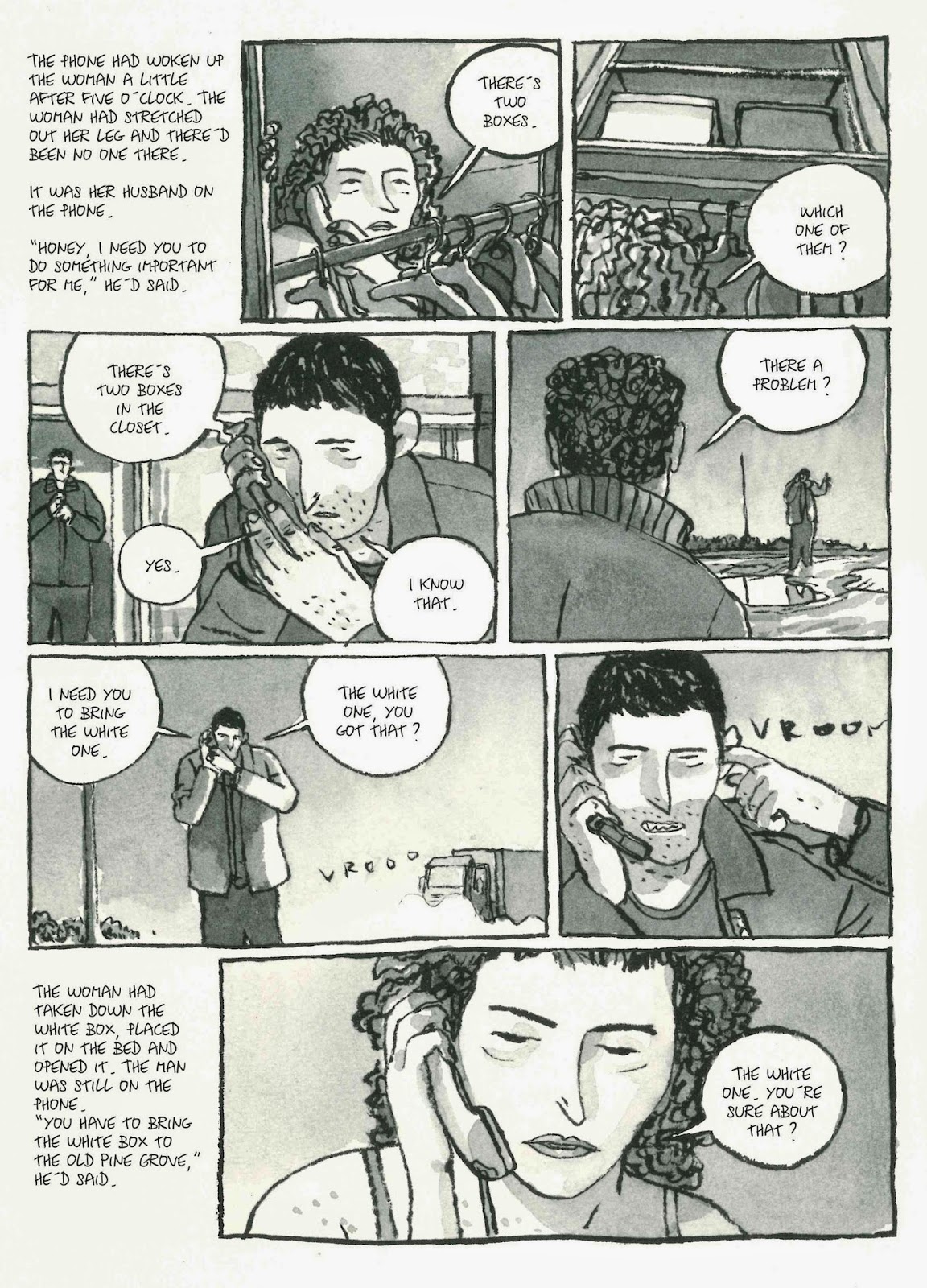