Jules Feiffer's Kill My Mother: a new direction for noir 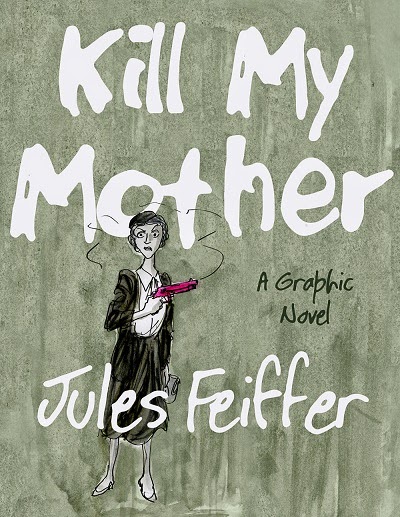 Hmm. Been looking ahead to what's coming out for the rest of the year- so often June onwards is the business end of the year for releases, and once you hit it, it feels as if the remaining months are spooling through your fingers. I'd read about Jules Feiffer's new, upcoming graphic novel a while back, but at that point  I had no familiarity with his work whatsover, despite his stature. I've since read Sick, Sick, Sick, which in my opinion is as close to perfect a book you will get, an exemplary volume of cartooning, which is still remarkably fresh and relevant, considering it was produced over 60 years ago- certainly you can't fault the sharpness of Fieffer's art and wit, even as the topicality of some of the subjects may have waned (although I'd argue not).  It's made me pay more attention to this book, Kill My Mother, which I'm pretty excited for as it sees Feiffer take on one of my favourite genres: crime noir. The New Yorker had the exclusive preview back in February along with some commentary by Feiffer himself, and there's quite a few things I find interesting about it.

Feiffer talks to the New Yorker about his love for noir, which inspire him to pen Kill My Mother:

'It goes back to my early years, when I was an addict of hard-boiled crime fiction and newspaper adventure stripsAs I aged into my eighties, I found that my interests in the long form, which over the preceding forty years had been largely taken up with theatre and film, shifted back to what I loved most as a kid: the classic adventure strips exemplified by Will Eisner’s ‘The Spirit’ and Milton Caniff’s ‘Terry and the Pirates.’ Both strips offered role models and crucial learning experiences.

I worked for Eisner from when I was about fifteen or sixteen, around 1946, on and off until 1951. Toward the end, I was ghostwriting ‘The Spirit.’ Eisner found me useless as an artist, but he liked the way I wrote.nd, for me, it was painfully frustrating that, no matter how hard I tried, I couldn’t learn to draw in noir style. It only took me sixty additional years to figure out how.'

While it's understandable to associate noir comics with a particular style- Eisner, Sean Phillips, Alex Toth, Frank Miller, Darwyn Cooke- I find it interesting that as a cartoonist he would feel he has to draw in a specific style in order to work within a certain genre- all the more so because what he's come up with doesn't look derivative of that at all! As much as genres and books can be subject to styles, with a cartoonist as renowned as Feiffer, one would think that he would use what makes him special, what makes him him: the character and paradoxical sharp/loose quality of his lines- and apply it to the genre- which makes me wonder how much of a visual style we associate with genres, or subject matters. I'd like to think I don't expect any book to look any certain way- I think subject has always been determined by the writing and illustration works to convey and narrate the subject, but perhaps that isn't true. That's what makes a book special- when a cartoonist makes it their own (otherwise we end up with homogeneous texts), offers a fresh take, which ironically it looks like Feiffer's ended up sort of doing, anyway.

'I began fooling with a story line, not really knowing where I was going, leaving behind the sketchy line drawings I had become known for and the satiric political and social ideas that made up my subject matter for over forty years.'

For me, Feiffer's visual aesthetic is half of what makes him him, (the other half being the manner in which he writes), but  it sounds like he wanted to make a clean break from what he's associated with, which seems to have pushed him to a new direction which is admirable- many artists don't consider experimenting with their style, particularly later in their careers, or perhaps that's an element of what's driving Feiffer- I doubt he can do much to take away from his reputation at this point. It frankly looks rather messy and slapdash to me, as brilliantly written as it may well be, but I'm still intrigued to read it.

Kill My Mother will be published in August. Quotes and images via the New Yorker. 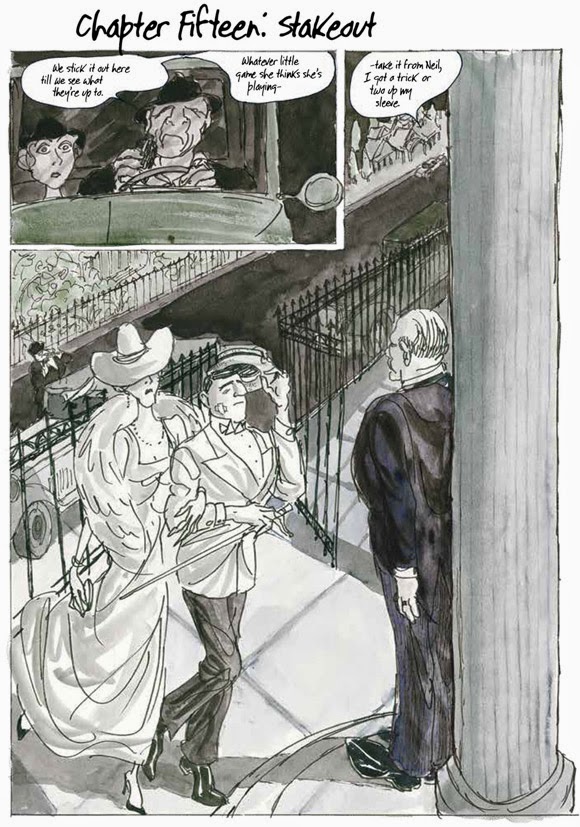 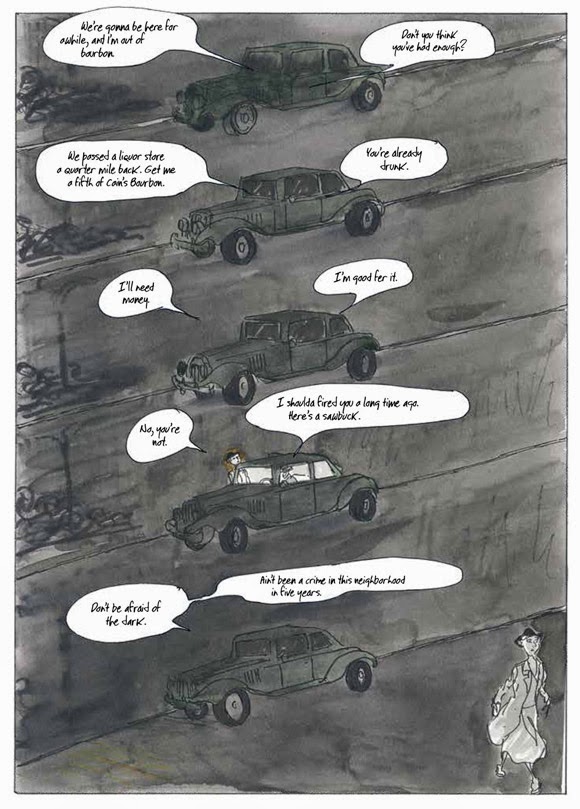 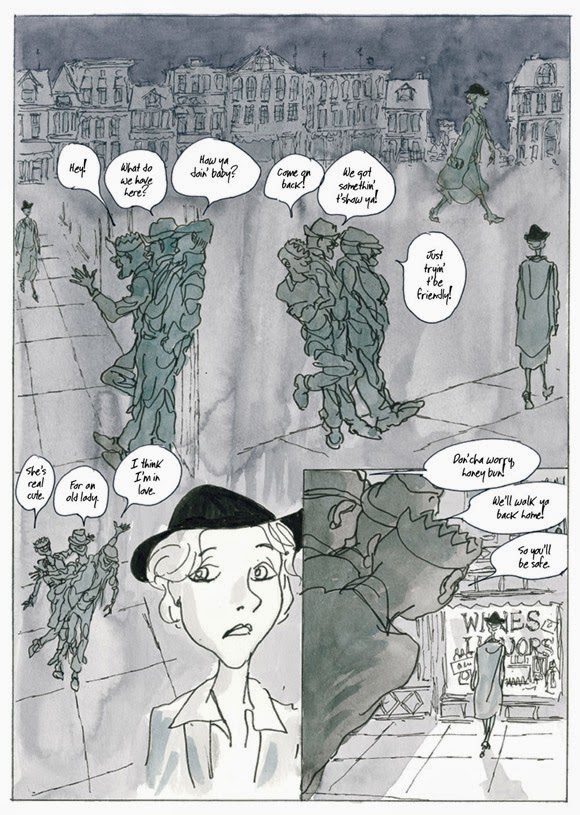 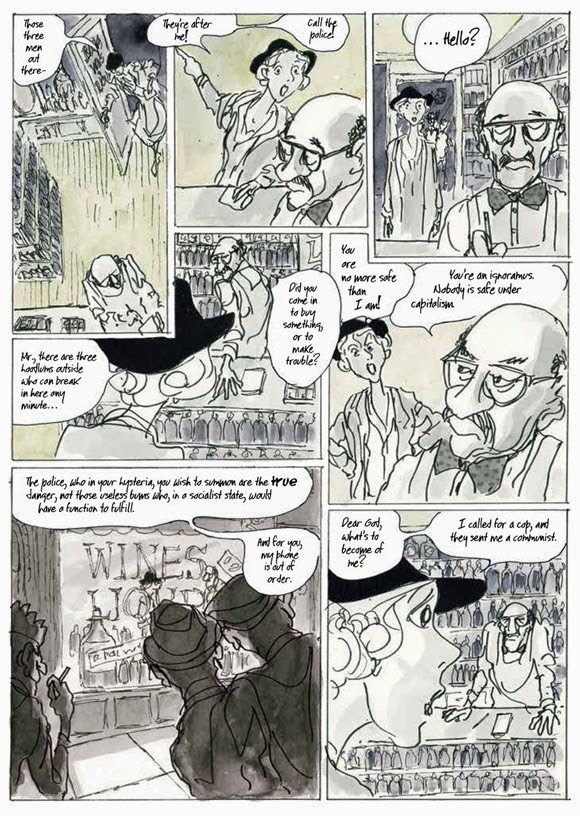 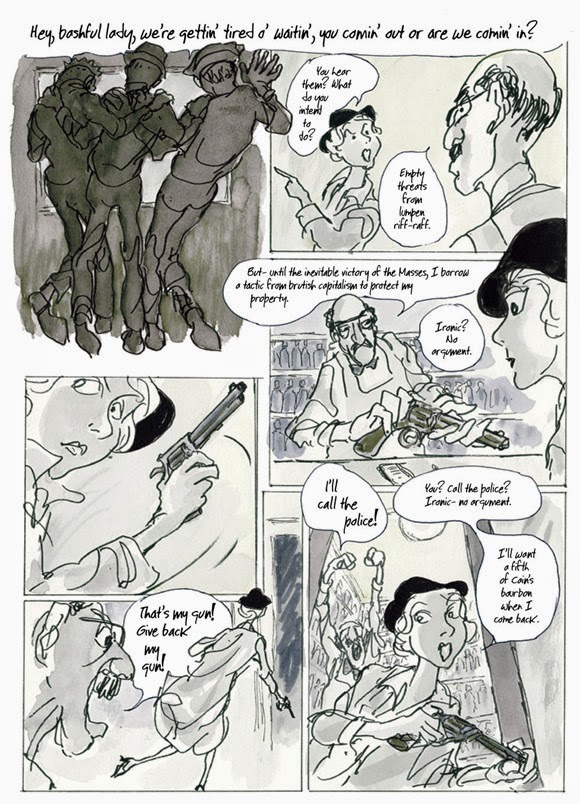 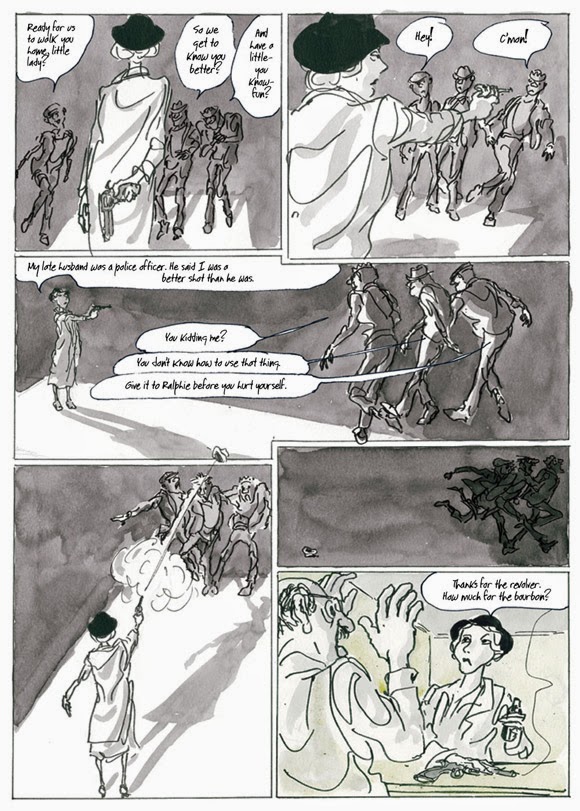