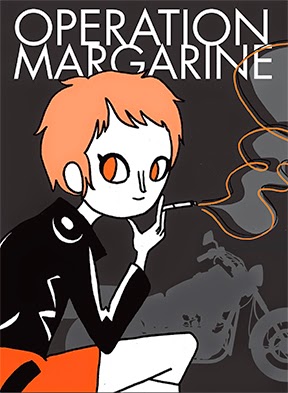 On the surface, Operation Margarine is one of those pulpy, fun tales in the vein of The Adventures of Jodelle; the ones that have various elements of cliched cool randomly thrown together- motorbikes, beautiful women, danger- creating something entertaining, often a bit light and silly. Here we have Bon-Bon, in the role of the 'wild-child-' drugs, married men, getting into fights, and Margarine as the spoilt little rich girl- rich but unhappy, whose efforts to go looking for something to stimulate and interest her confuse and unsettle her family, who constantly check her into rehab clinics where she's kept and forcibly drugged and docile much of the time. Skelly flags up these archetypes on the very first page -trouble tufff girl' 'rich girl runaway.' The story begins after Margarine's broken out from another facility, bumping into Bon-Bon a few days later who comes to her defence by punching out a creepy, antagonistic man. When Bon-Bon suggests Margarine should leave with her to escape her life, Margarine agrees more due to a lack of options than anything else

And so you end up with this narrative of the two of them riding huge motorbikes around the desert, getting into trouble, getting drunk, chased down by old gang enemies of Bon-Bon. All the while Bon-Bon empowers Margarine by both caring about her and taking her under her wing, and also by simply being Bon-Bon: tough and uncompromising, but also kind.  Slowly Margarine begins to come out of her shell and trust herself and her new friend. Similarly Bon-Bon finds someone who looks up to her, and likes and accepts her for who she is, although there's an undercurrent of whether she's able to accept who she is to herself. Bon-Bon and Margarine are essentially both isolated from society for being who they are, for not conforming to expectations, the duly labelled 'bad girls' and so gradually discovering that they can be themselves around one another without judgement is precious. 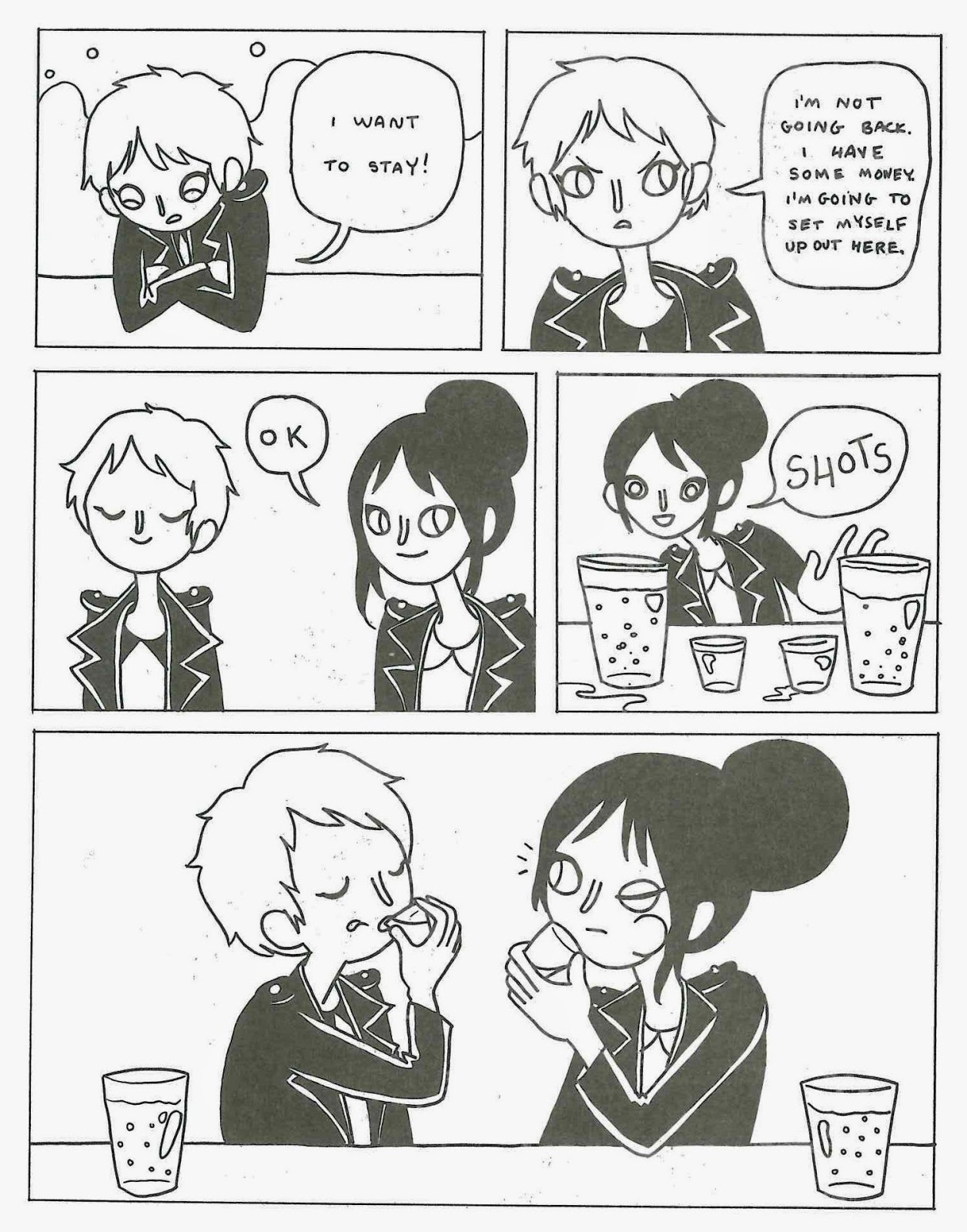 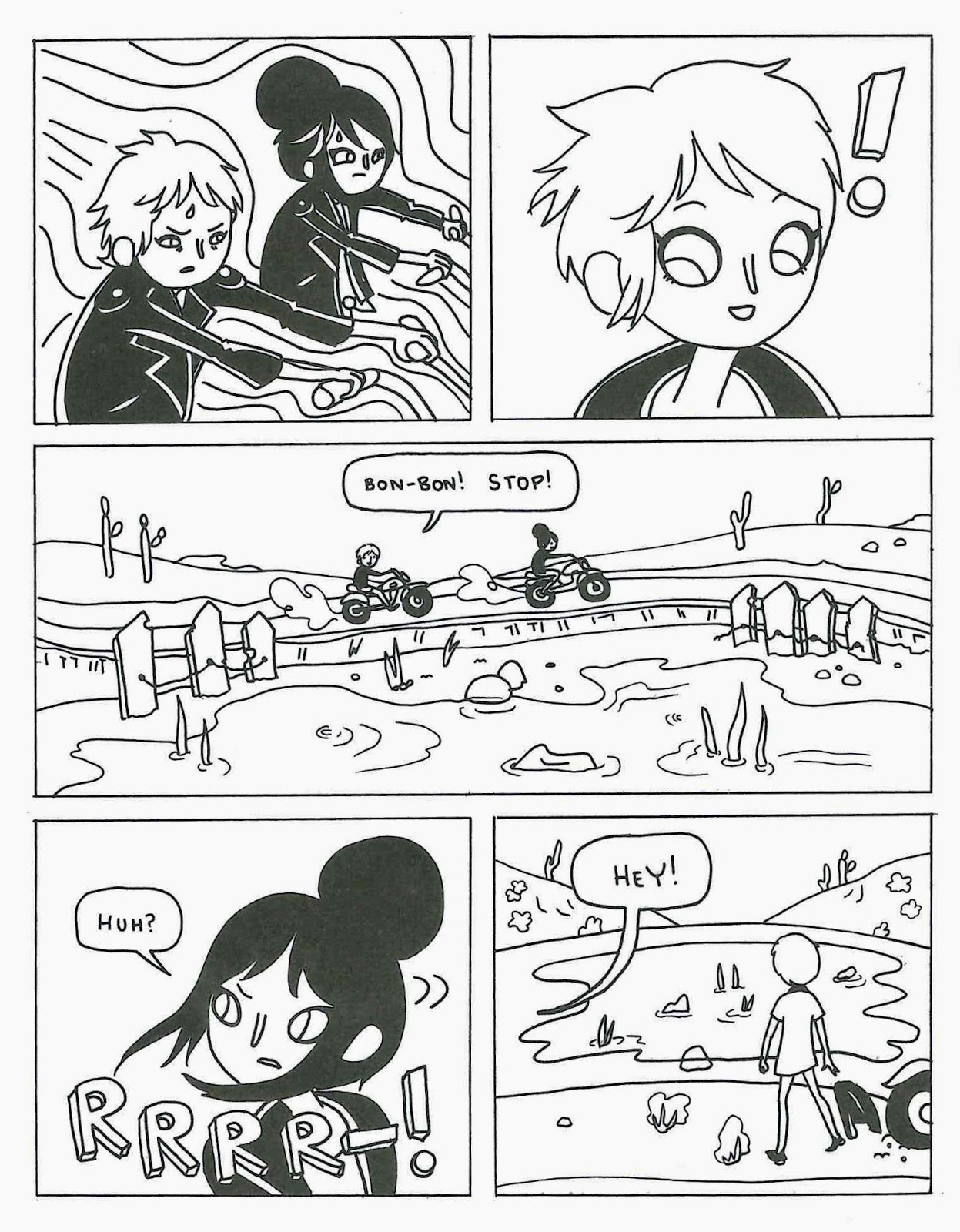 Operation Margarine is an ode to those movies and tales of yester-year, in which seeing women have sex, smoke, drink, ride motorbikes, and generally be independent, self-thinking beings with needs and desires -'bad behaviour' - still offered shock and novelty value. Despite not being close to an ideal in the attitudal balance between men and women, presented in contemporary guise, that shock value is much diffused. So you're left with the looking cool, and the emotive depth Skelly's interposed in the relationship and journey of the two women. The difficulty is that these kind of stories aren't traditionally supposed to be overtly emotional, so it's a careful treading of weaving in those facets while not losing the inherent laissez-faire component of the narrative. It's a tricky balance that's not quite achieved here, that reconciliation not really connecting, but hovering reluctantly in between.

The thing I loved most about this was Katie Skelly's art and cartooning, and the visual strength of the images. There's a real pop aesthetic present, the bold simplicity of a black and white ligne claire style (with the addition of huge bug eyes which makes it more dynamic), clear working with that means you can take almost any part of the comic and the individual illustrations and panels work as stand-alone 'pop' imagery with a 60's psychedelia slant: the 'please stop!' panel with the needle, panels of Bon-Bon smoking a cigarette in a fat curtain of rain, the bouncy bubbled sfx, a close panel of Bon-Bon's head and shoulders in which the background is those swirly thick lines, indicating a sudden heightened emotion, tightly spiralled backgrounds with a hungover Bon-Bon's head floating in the centre. Skelly has a really sure, but easily cursive line, and she's able to render things swiftly and thoroughly with the use of minimal lines and detail- although she can do intricate, too- there's a couple of great wide panels- one with Margarine walking down a city street, another in which the girls are in a motorcycle garage, that are wonderful.

This isn't the kind of book I'd normally pick up, but I'm glad I did because it's so refreshing in it's individuality. 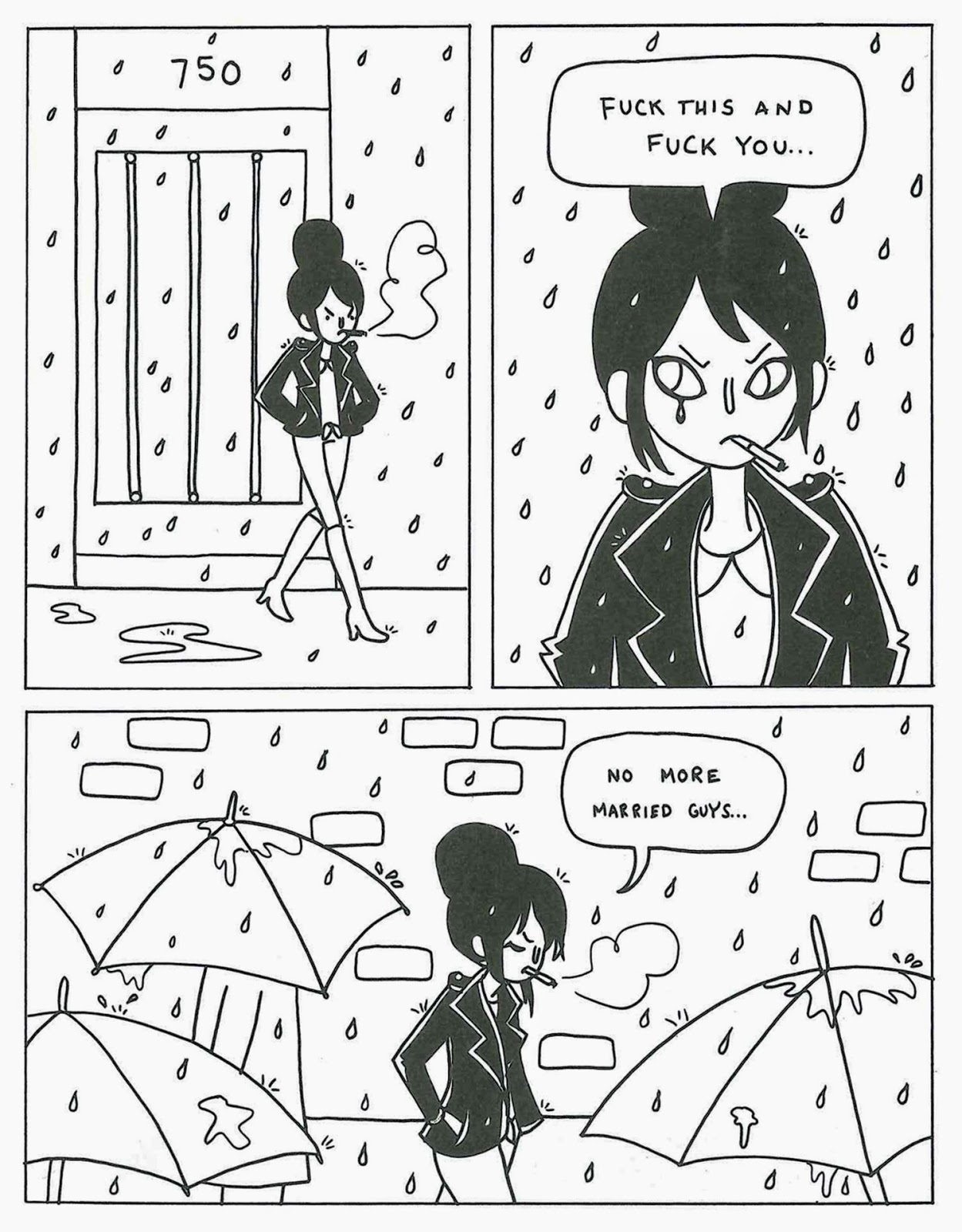 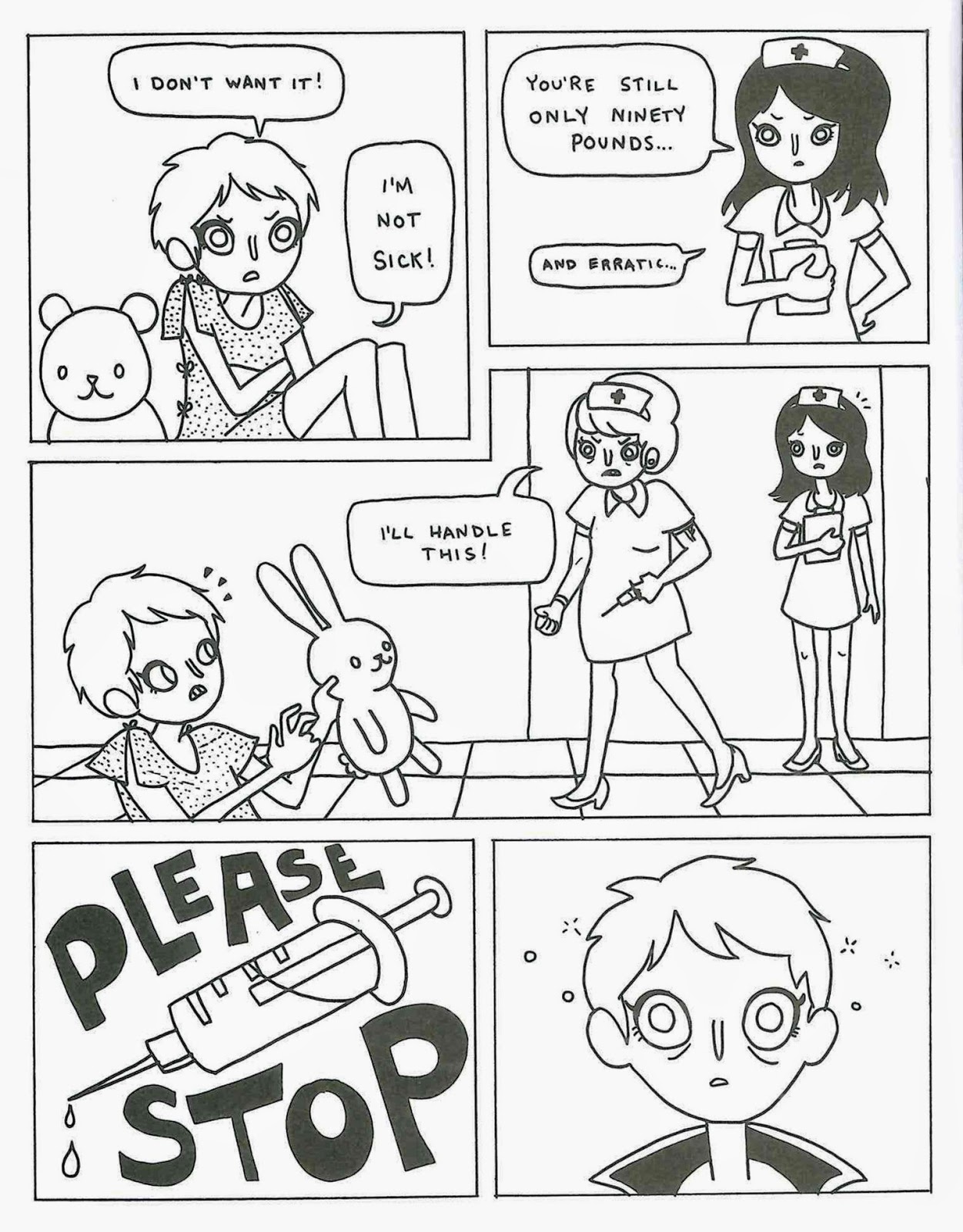 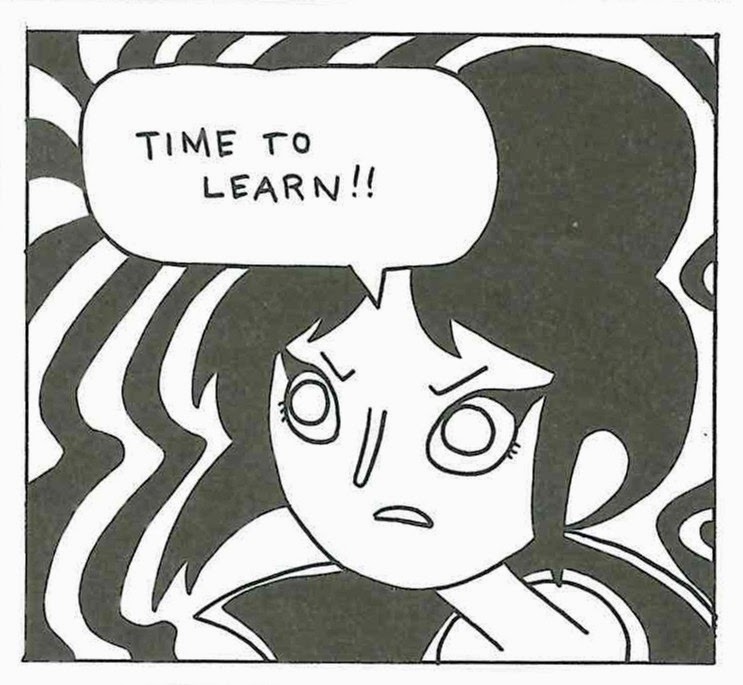