Resident Alien 2: The Suicide Blonde: noir as the other 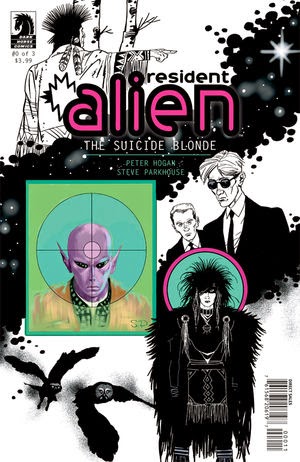 Resident Alien 2: The Suicide Blonde by Peter Hogan and Steve Parkhouse, published by Dark Horse: How much do I love Resident Alien? Well, although I took several books- both prose and comics- with me on holiday, when I saw this newly-released second volume on the shelves at Kinokuniya, I bought it without a second thought (and y'know I could have waited 5 days and got it substantially cheaper thanks to the glories of staff discounts).

If you've been reading this blog for a while, you will recognise that Resident Alien falls firmly within my personal genre and interest preferences: it's about a stranded alien who takes on the role of a medical/investigative consultant to the police. While I'm more inclined to pick up books about dinosaurs, crime, humanistic robots, and strange worlds, I would hope I'm equally liable to put them down if they're not any good. Resident Alien is good- very good, almost deceptive in its solidity. It's an understated book, in the sense that it's story is not only straight-forward and linear but clear regarding plot and meaning: a choice has been made to focus on characters, their development and the 'mystery of the week' narrative services that larger aim, as well as being enjoyable to read.

The first volume introduced us to Dr Harry Vanderspeigle, an alien who crash-landed on Earth many years ago, and after being unable to communicate with his home-world, has eked out a quiet existence, settling into a lakeside home in the Pacific Northwest (appropriately enough, in a town called Patience), and keeping himself to himself. That existence was disrupted when the town's resident medical dies suddenly and the police turn to him for help. Harry's reluctance to get involved and put himself at risk of discovery slowly dispersed as his aptitude for getting to the bottom of mysteries unfurls; the connection with people he has long sought to stave off, now lit. The Suicide Blonde picks up pretty much exactly where that book ended, with Harry recovering in hospital from events, and once more drawn into another investigation- this time an apparent suicide-, struggling between heart and head: the former wanting to learn more, reveling in the company of others, with the latter urging him to return to anonymity. 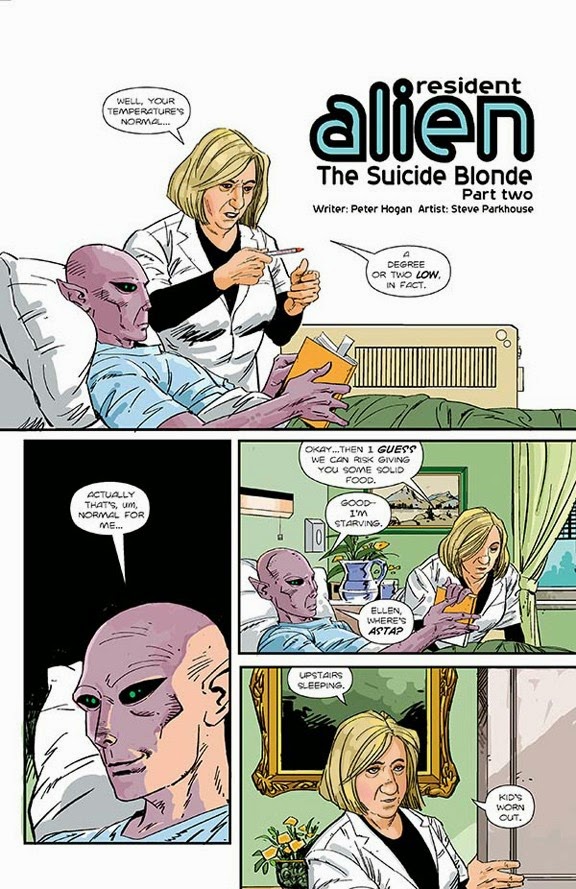 I've been trying to pin down why I have always  gravitated towards the crime, mystery, noir genre so much, and one of the reasons is the notion of the accepted outsider. The atypical protagonist so deeply entrenched within these tales- the misunderstood maverick, the brilliant loner, the guy treading shifting boundaries, is traditionally somewhat of an outcast, often viewed with suspicion and wariness. It's a placebo position of 'other' that is usually asserted by the protagonist make-up and personality, a refusal or inability to change who they are in lieu of a paid-up place in conventional society, You could argue the notion of the outsider in a role which has been overwhelmingly inhabited by white males, although in prose fiction, at least, it has been readily adopted by female investigators - Kinsey Millhone, Kay Scarpetta, Temperance Brennan, etc., the otherness here- conveniently or inconveniently enough- is presented as more of an internal function.

Growing up I loved reading crime mysteries, loved reading the clever, brave people who would unlock these puzzles, who were always right, and who made things right. On the one hand it fed into my feelings of otherness as a British Pakistani kid, and on the other end of the spectrum the trope allowed me to indulge/believe in my own 'specialness;'on some level we all believe we're different, that nobody quite understands us- there's an inherent vein of moral or intellectual superiority at play in a lot of crime noir. There's judgement in there: even as we view the increasingly violent and depraved tendencies of human nature from a safe, and accepted distance, and release, and quandary, too, as we contemplate hypothetical actions and situations.

Where the crime noir protagonist is often portrayed as the stranger within, medical examiners, police detectives -however rebellious or lone wolf- are still backed by authority and establishment, the safety of their roles (the private investigator or gumshoe less so). It's here that Resident Alien turns some of those conventions on their head:  Harry wants to fit in, but at the same time he want's that unequivocally- without having to change. Disguising his alien features via the use of a perception filter, he knows his differences would not be viewed favorably were they to come to light, despite him meaning  no harm and there being nothing wrong with who he is. It reads very easily as an immigrant allegory. Hogan and Parkhouse shift this volume a little more in the direction of Harry's background- his black-suited government pursuers, once dubious as to his existence, now moving ever closer.

Parkhouse's art evokes the more recent comic noir style of Sean Phillips and Michael Lark, the line more controlled and complete, again lending that solid quality to the narrative: a realness. He does a masterful job of seamlessly integrating a purple alien into the banal landscapes of the everyday, so well that you never question his presence, but somehow begin to look at everything as perhaps he would- with people and places taking on a strange tinge, an effect compounded by his colouring choices- the greens and purples working to both ground and emphasise the wonder of the ordinary. Hogan and Parkhouse have created a superb comic, an exercise in measured excellence; I hope they are given the opportunity to continue the story they obviously have in mind. 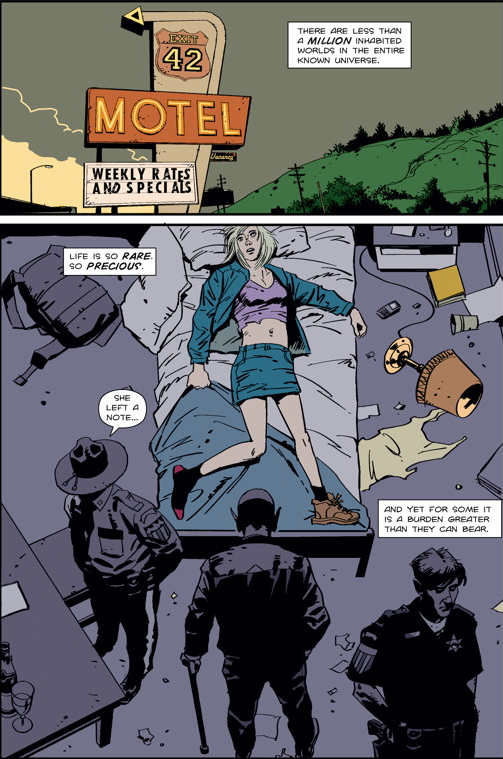