You know how I've been extolling the praises of Swedish publishing outfit Peow Studio and their beautiful risographed books for a while now- well, having returned triumphant from TCAF, they will also be tabling at two UK comic festivals this year: ELCAF this coming Saturday, and Thought Bubble later in November (nice of them to split the North/South so equally). Peow have just released a host of new comics, and the guys were kind enough to send me some copies of various publications (which worked out really well, because they were all on my 'to buy' list), and since these are the comics that they'll be selling at afore-mentioned festivals, I thought it'd be a good idea to take a couple of pictures of each book, tell you a little about it, for anyone wanting to add it to their con buy list, or those who simply want a look-see-know on any title. I'll no doubt be reviewing some of these somewhere down the line, but the purpose of this spotlight is simply to provide a visual feel for the comics and a brief run-down of subject, along with my, um, esteemed opinion.

All books are available to buy online from the Peow shop. 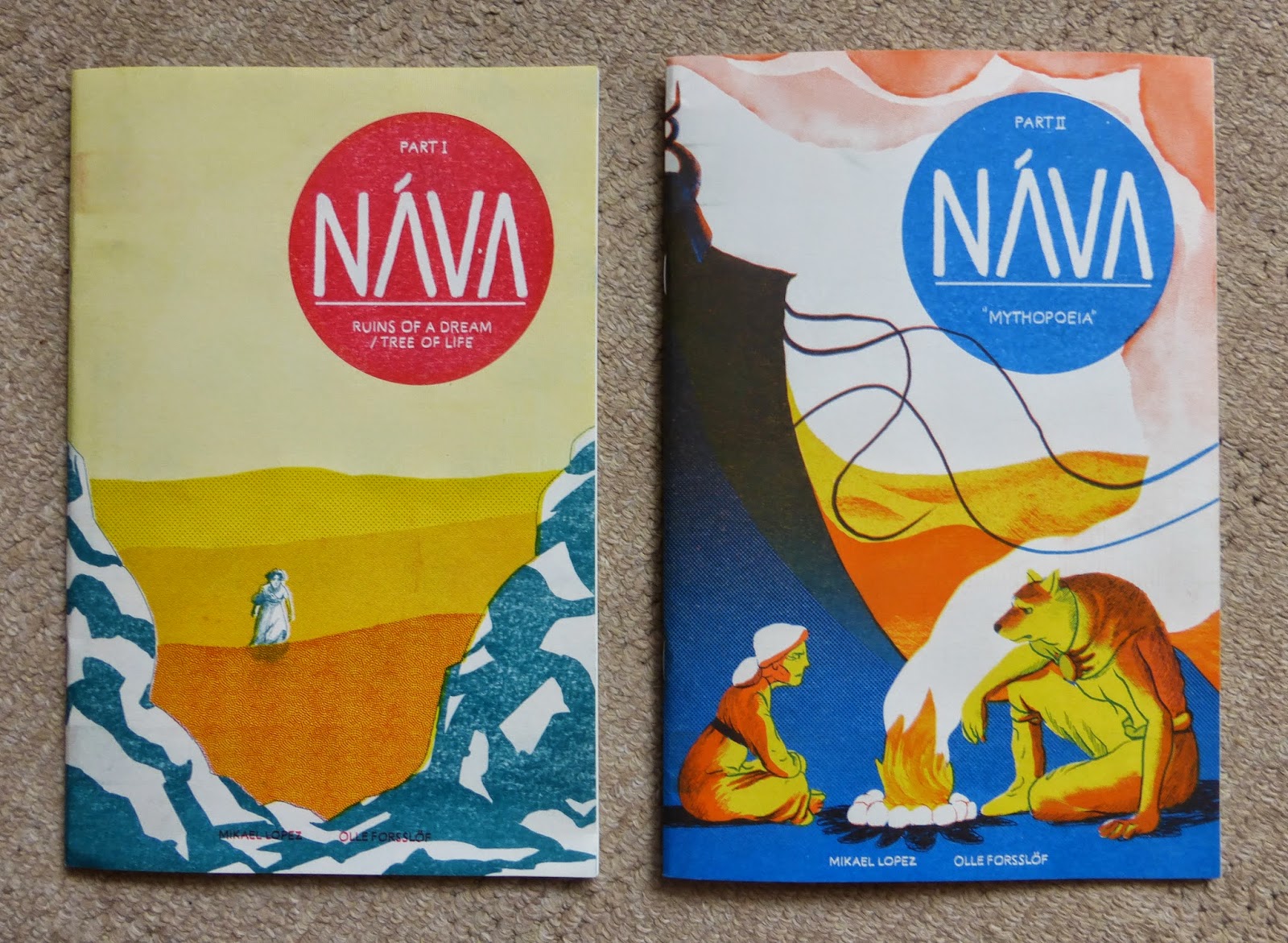 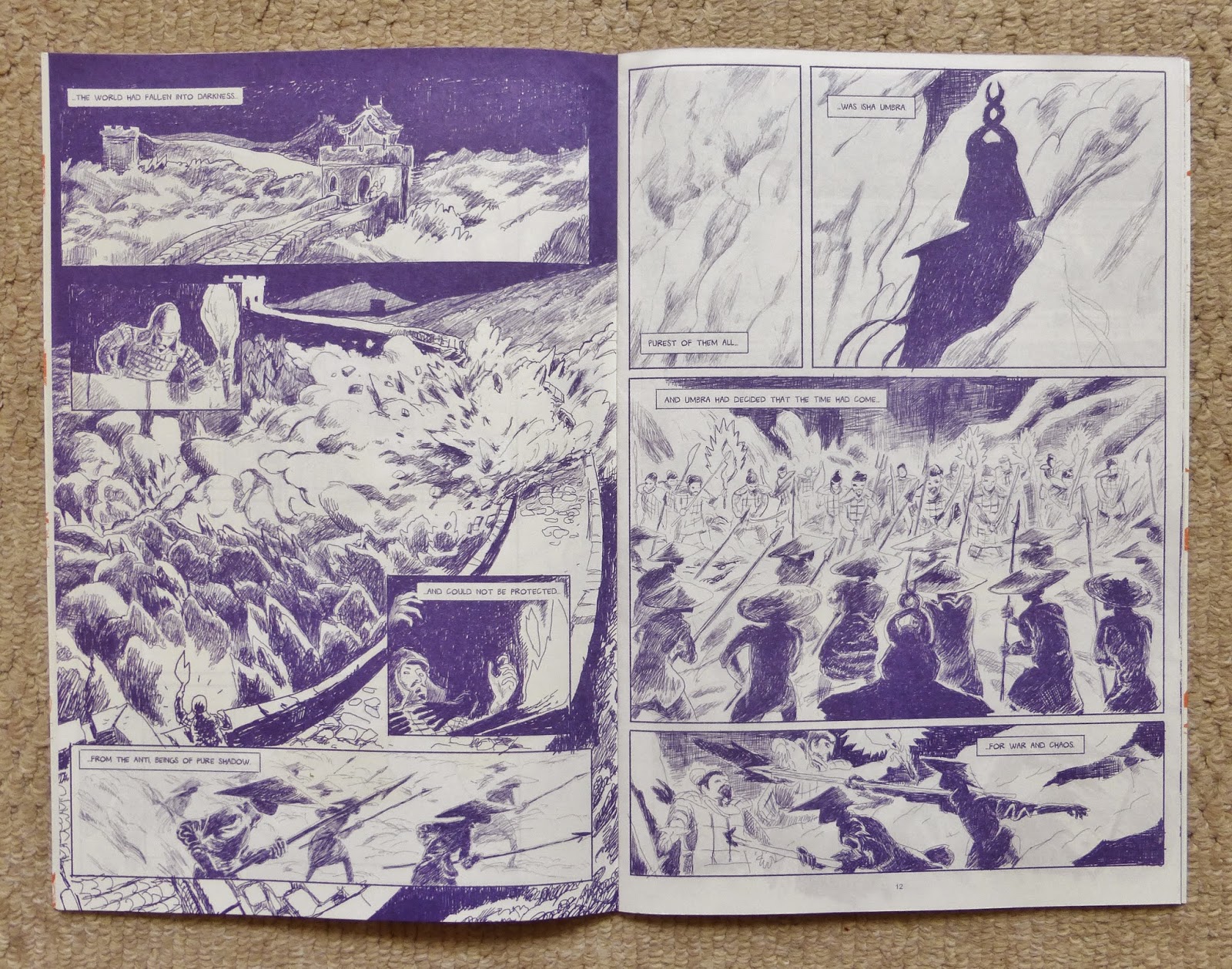 Nava 1: Ruins of a Dream & Nava 2: Mythtopoeia by Olle Forsslof and Mikael Lopez, 32 pages each, A4: You may remember that the first book of Nava, Ruins of a Dream was one of my best reads of last year, so to say I've been anticipating the second volume is a bit of an understatement. I ran a first look 6 page preview of part 2, Mythtopoeia here if you want a closer look, although that's before it went to print and the colours were added- and they make a huge difference. I see some people saying they're 'over' risograph comics as if its a fad or gimmick, which is something I disagree with, especially when you have an outfit like Peow who use the risograph method as an integral component of making comics, taloiring material from the beginning to consider elements unique to that printing process, instead of say creating a comic and then deciding to print it via risograph to give it an edge. As much as I'm a champion of their work, you only have to hold one of their books in your hands to see the quality of production and the thought that's gone into every aspect.

Coming back to Mythtopoeia, I have to harbouring reservations after seeing those uncoloured pages and the change in art style; one of the things I loved so much about the first book was Forsslof's beautiful fine lines and ephemeral vistas. Obviously, artists are continually evolving and pushing themselves, but there was apprehension over maintaining consistency over a series. Having now read it, I can happily say those fears are totally unfounded (as you can see from that great double page spread photographed above) -it matches the excellence of the first in an equal but different way, moving the story along, with the art style and colour changing as various characters take turns in telling stories. Highly, highly recommended, and Peow have released a  new printing and cover for the first book, to go along with the publication of second, each complete with luscious patterned endpapers.

Read a review of part one, Nava: Ruins of a Dream, here. 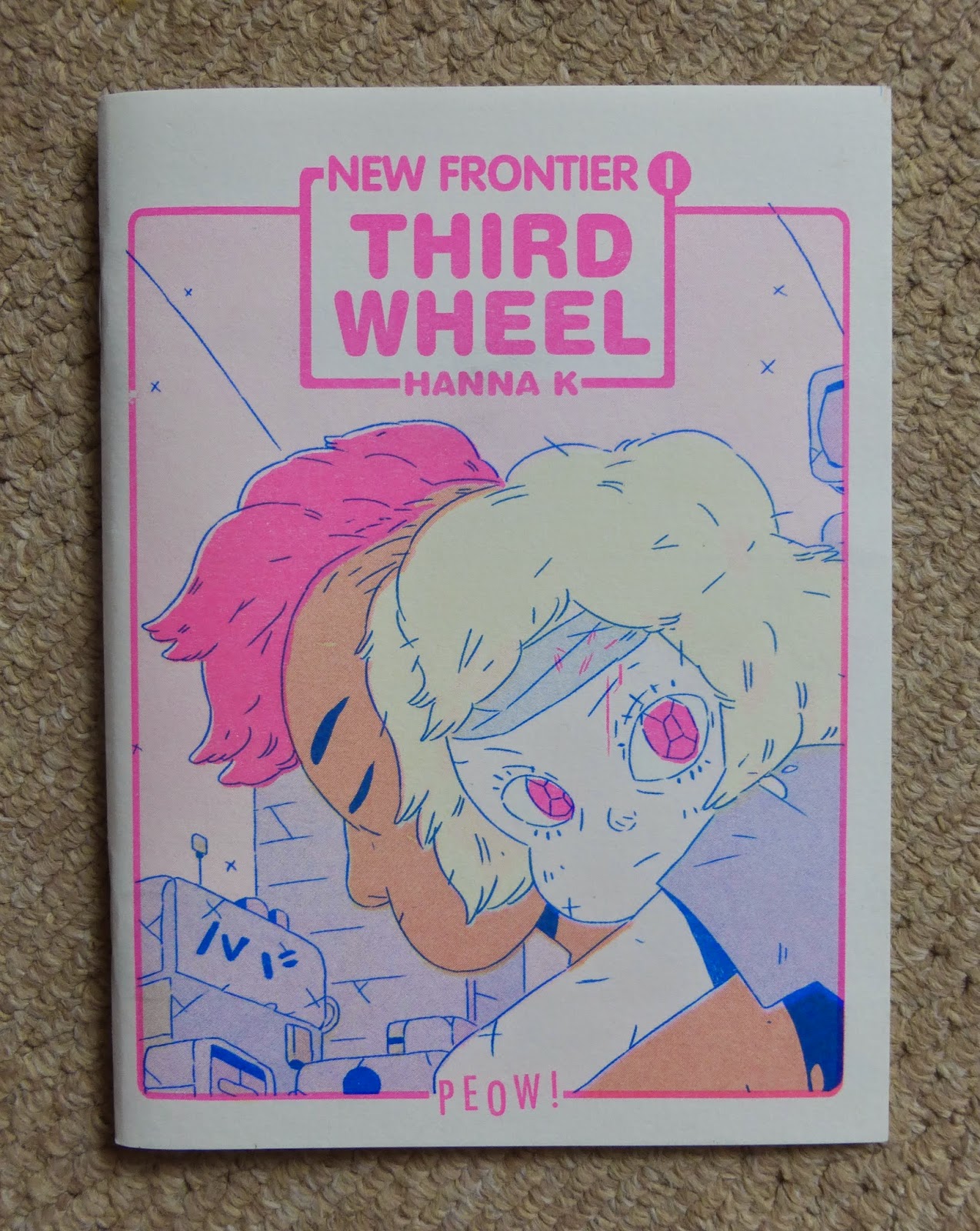 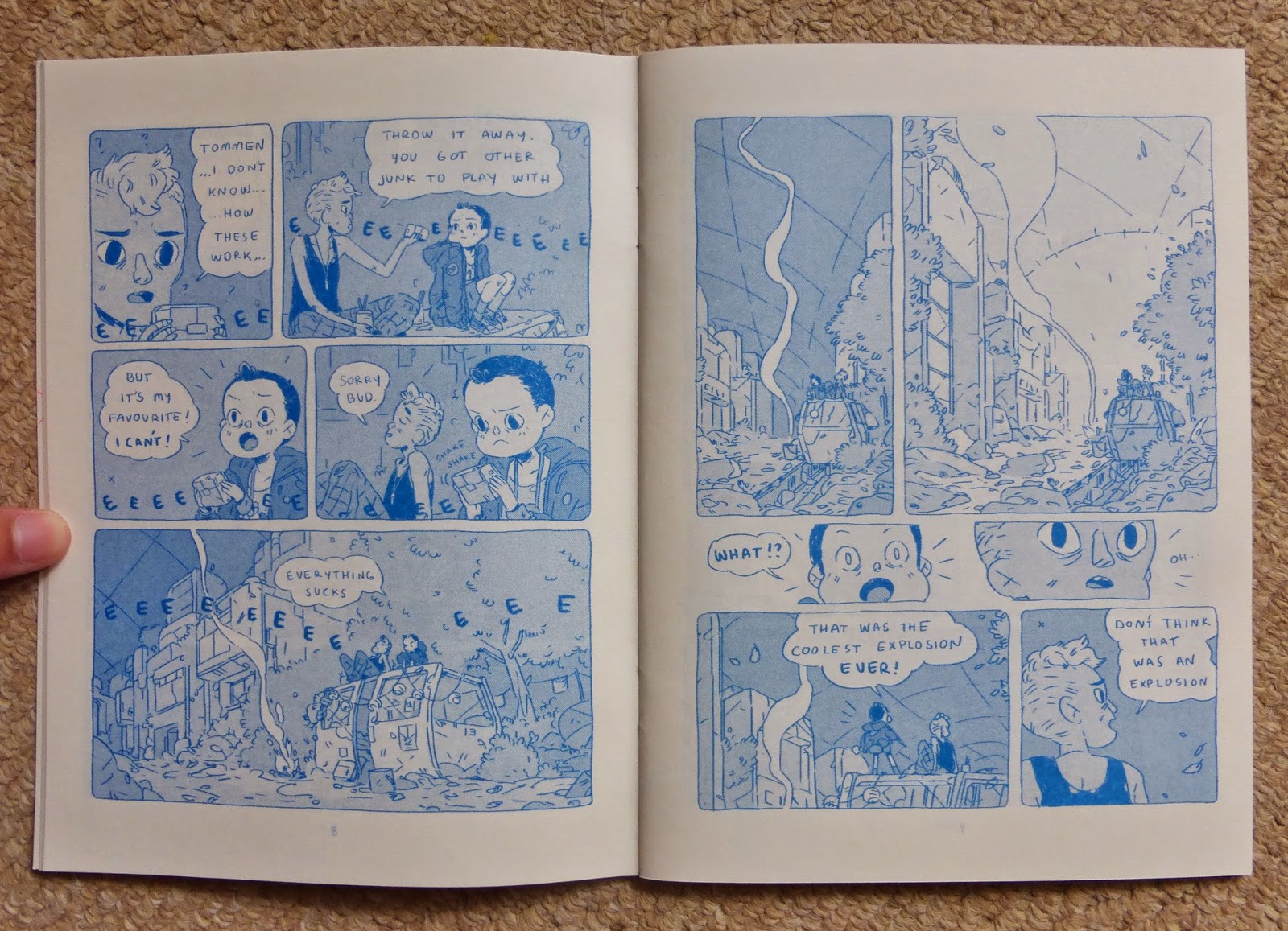 New Frontier 1: Third Wheel by Hanna K, 40 pages, A5: This is the first part of Hanna K's space saga about 2 orphaned boys- one older, one younger looking out for each other in the distant future of 2007, scavenging ruins of abandoned cities for food and technology that they can make use of, whilst evading other opportunists and any authority figures. The dynamic between them changes, however, when they hear a ship crashing and decide to go and investigate the scene. Suitable for all ages, and attractively drawn as every by Hanna K, in a scuffed-anime style. 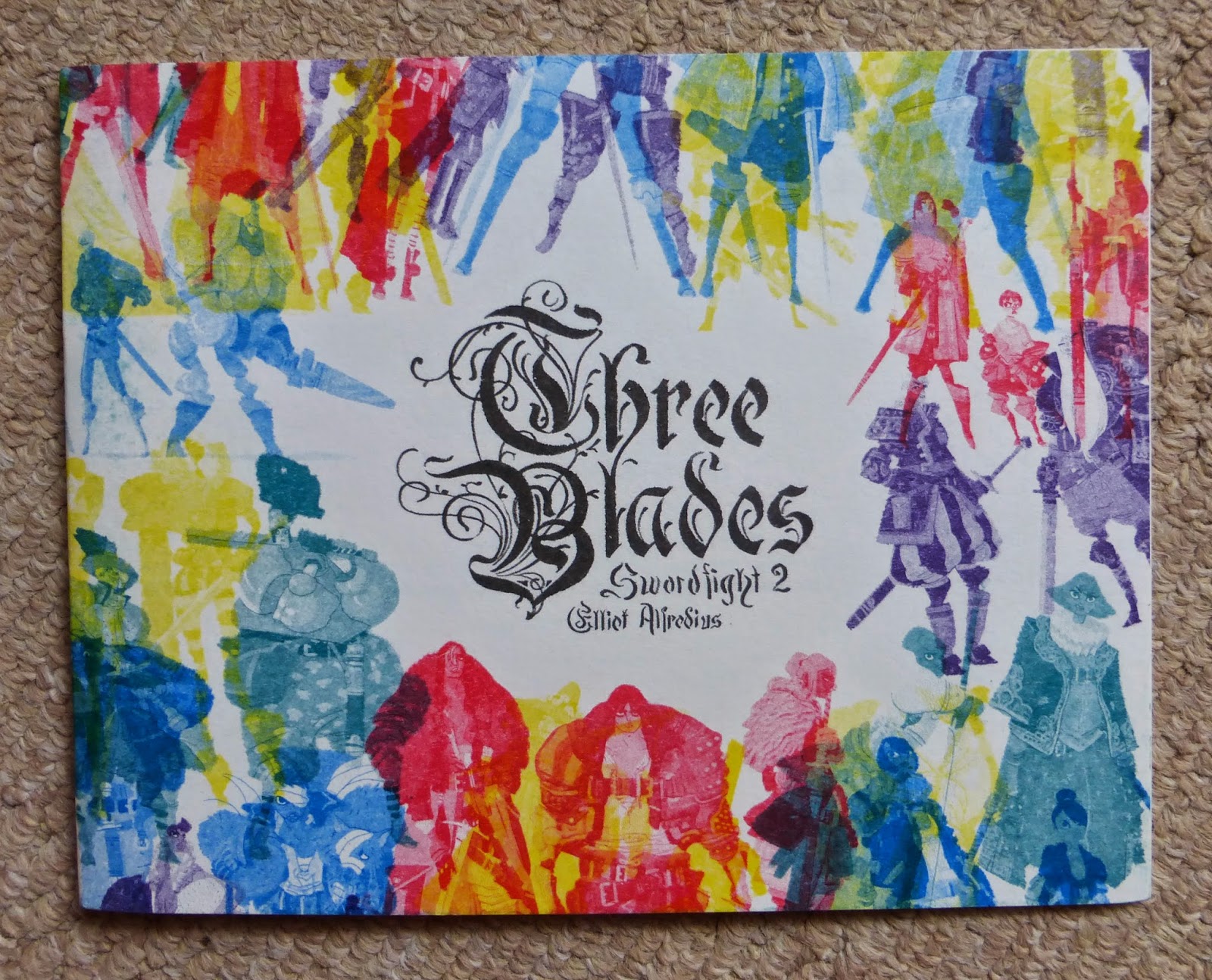 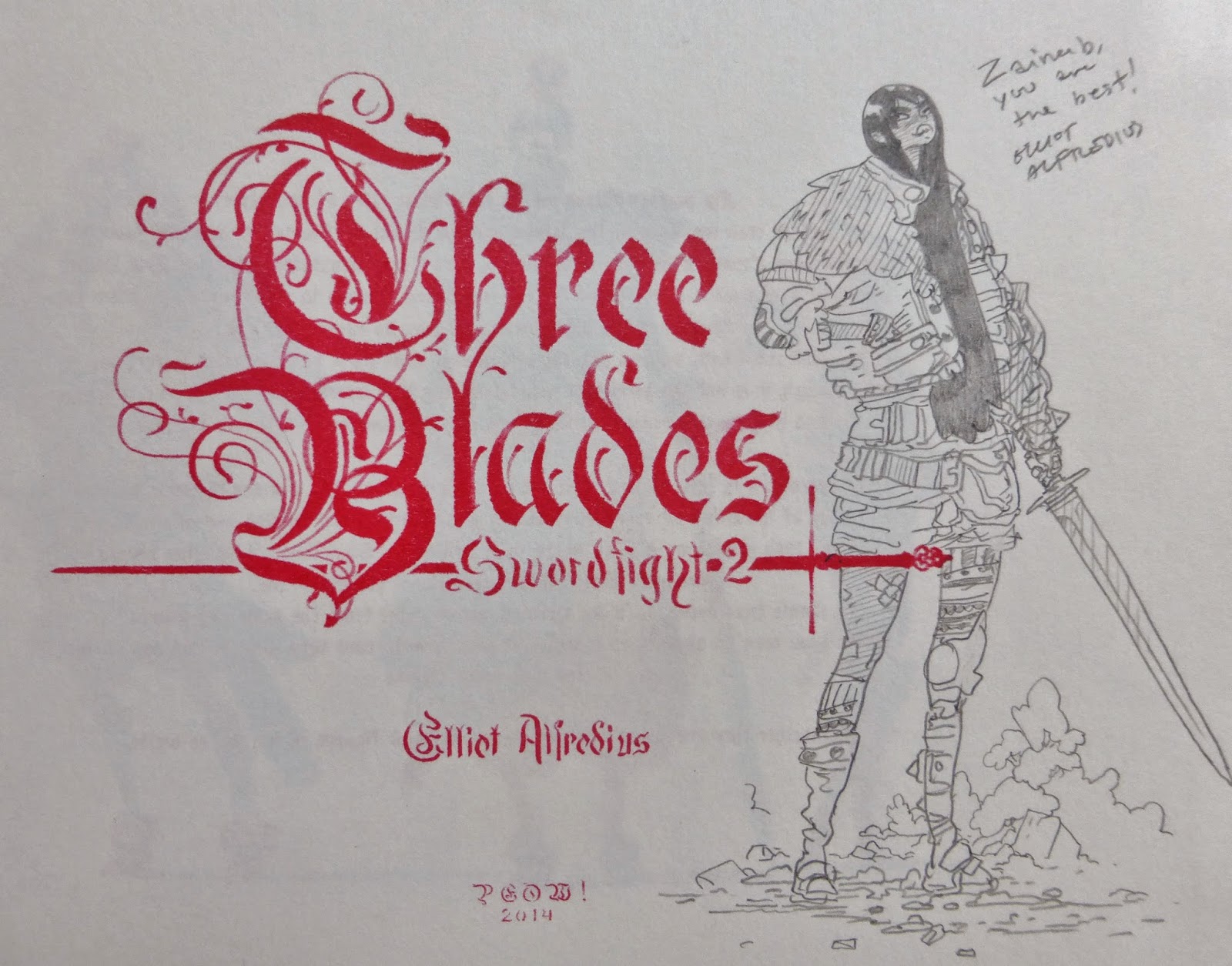 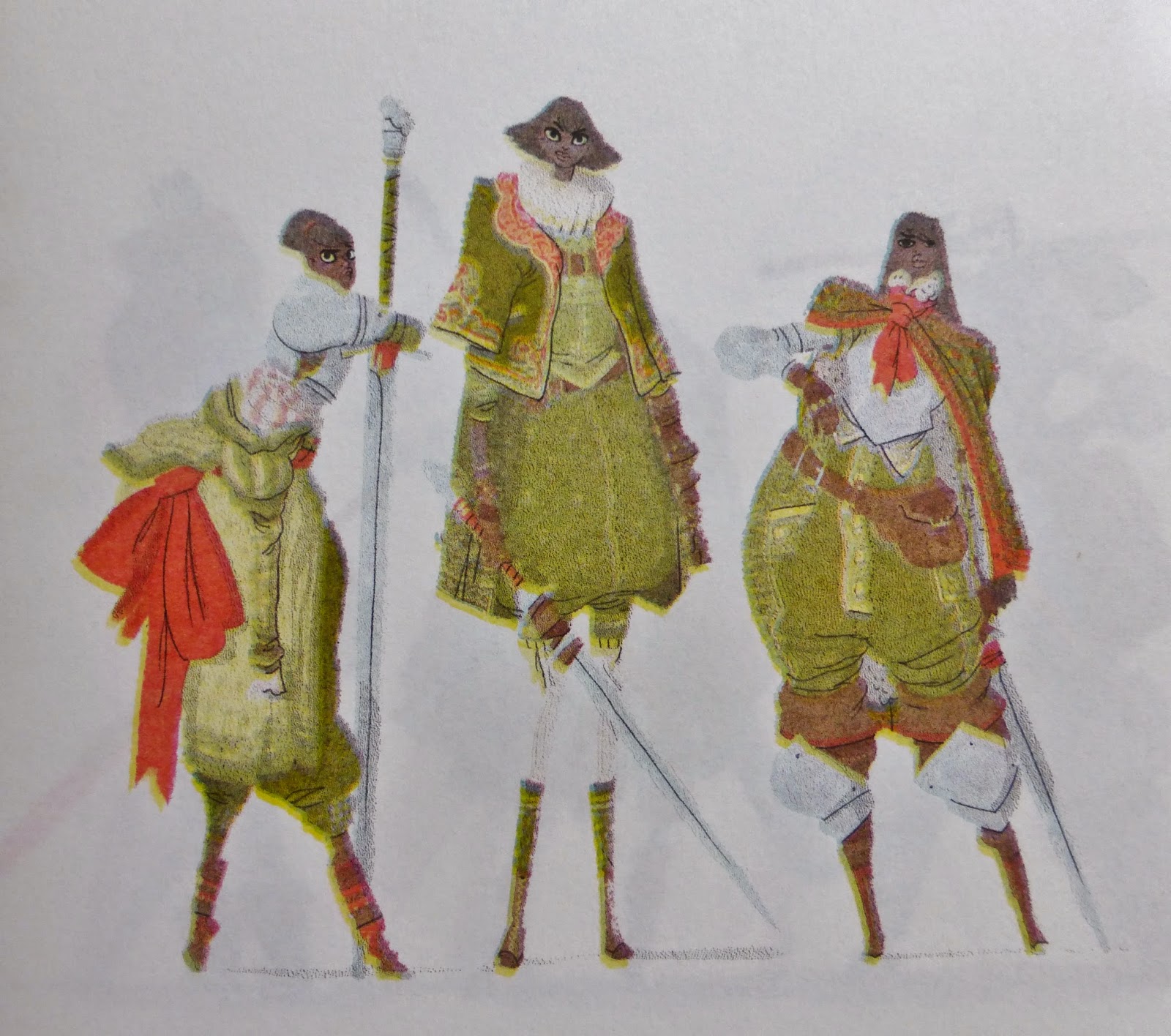 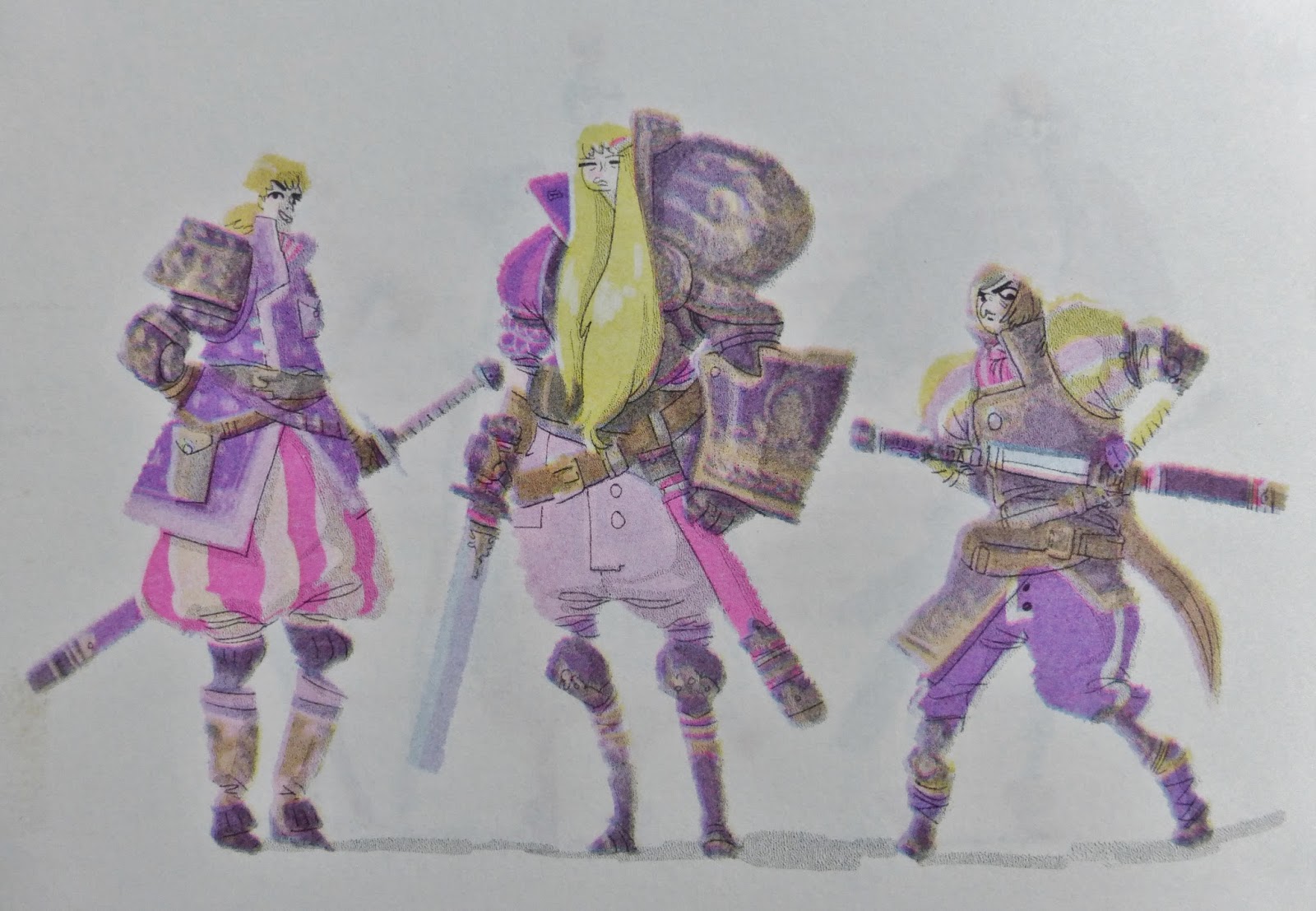 Three Blades Swordfight 2 by Elliott Alfredius, 24 pages, A5 landscape: I had to include the picture of the dedication that Elliott did- how amazing and bad-ass is that knight?! This isn't a comic, but more an art-book, as Elliott writes in the introduction, he's been fascinated by swords and the people who carry and master them since he was a child, which has evolved over the years into imagining who these warriors are, giving them back-stories, and transmuting their personalities via their armour, clothing, and stance. It's acutely beautiful and the detail wonderful to look at. 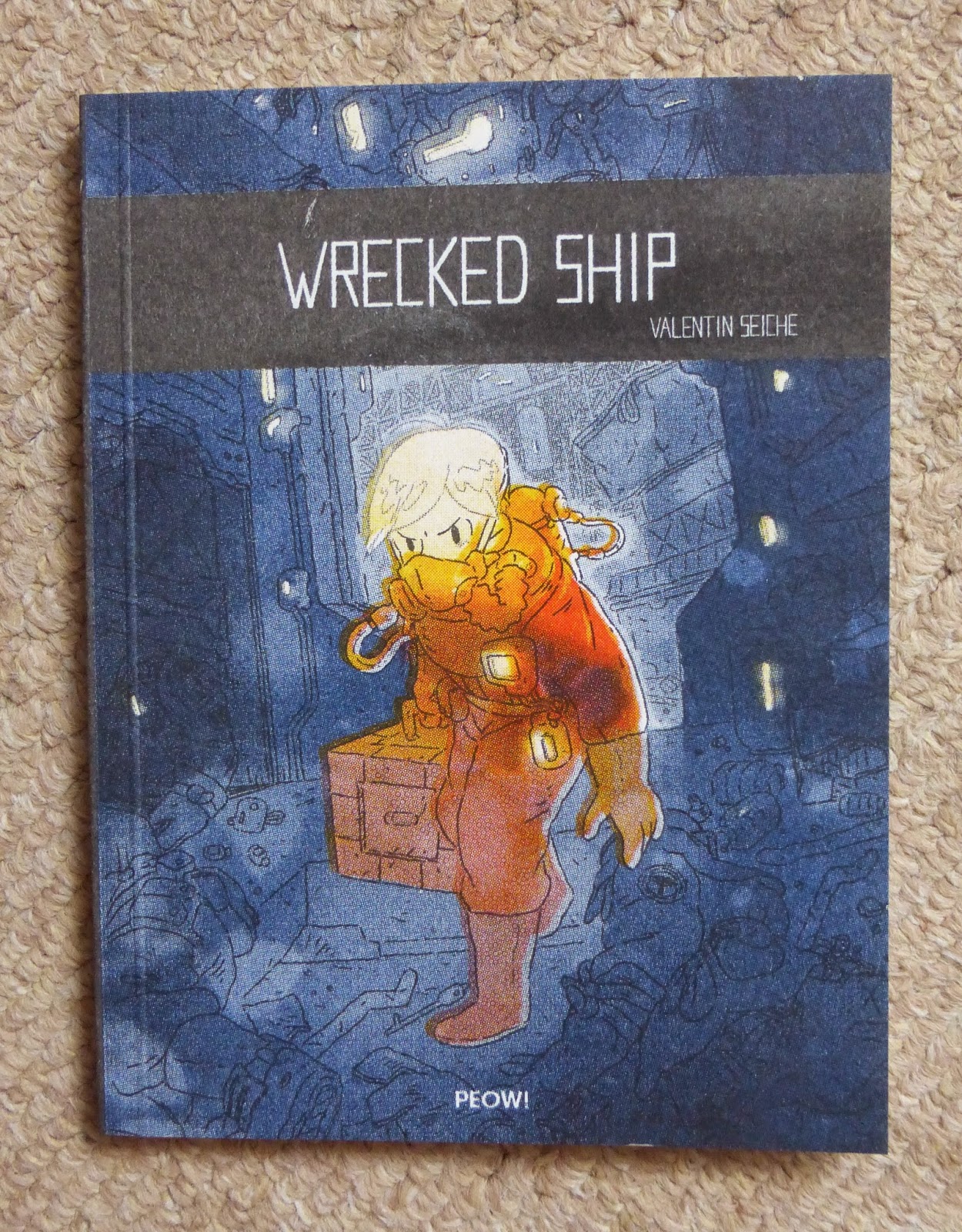 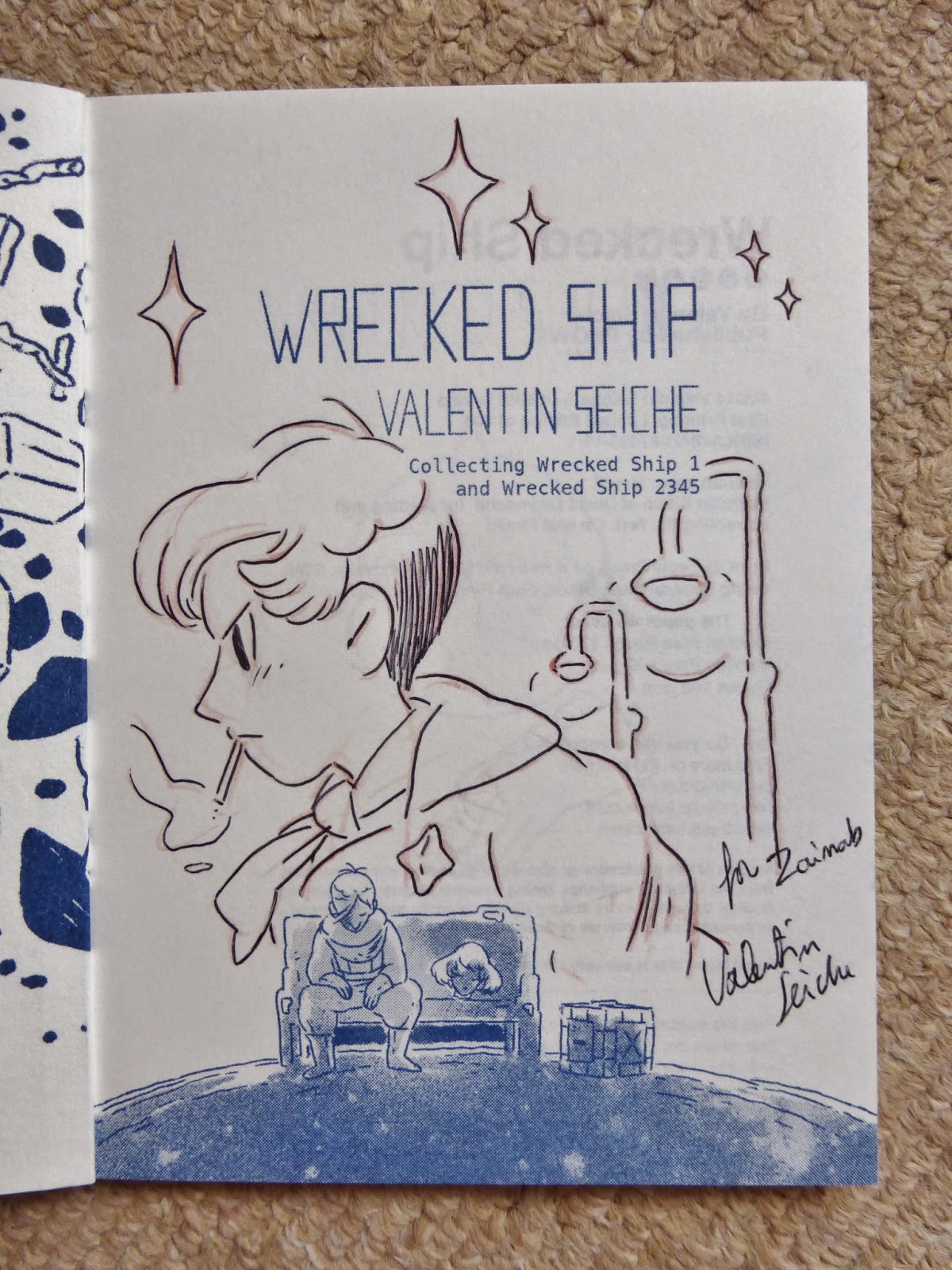 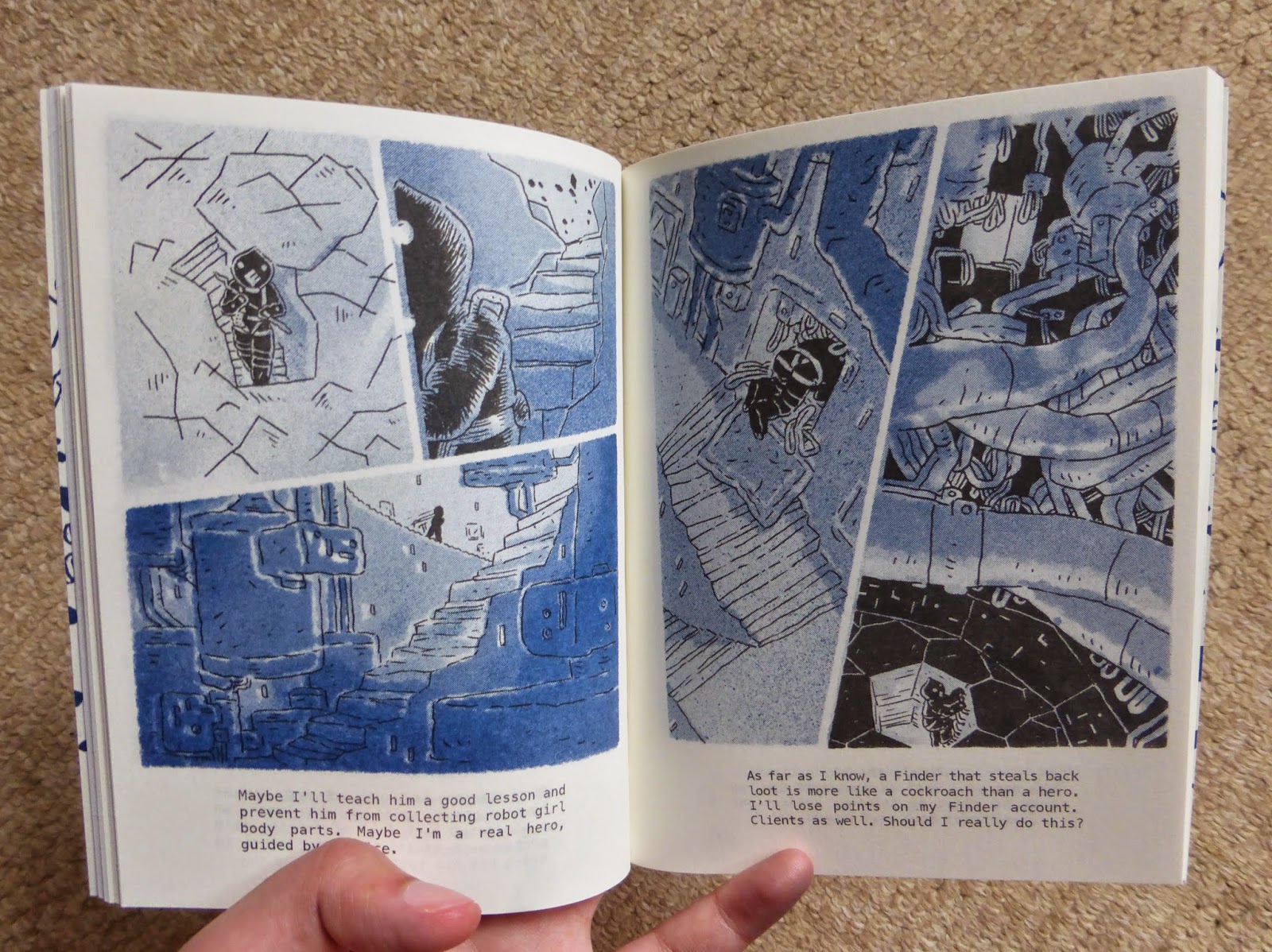 Wrecked Ship by Valentin Seiche, 84 pages, A5: This is Peow's first perfect bound book (with another cool dedication!), continuing ace French artist Valentin Seiche panel per page comic, Wrecked Ship, of which this is the complete edition (it was originally introduced as an 18 page mini-comic; you can read a review of the first installment and a short profile of Seiche's gorgeous art and concept portfolio here). I've not managed to dive into this one yet, but I really liked the lonely story of deep space excavator Andre Melchior and his discovery of what looked like a damaged android- that first mini ended somewhat ambiguously, so I'm glad Seiche has finished the whole thing. Whilst I'm not always a fan of the panel-with-text-below format (it disrupts flow and movement), Seiche's art makes up for it, and I do find that even the slight difference in layout is pretty refreshing- it works to give it a different feel, more like illustrated prose. 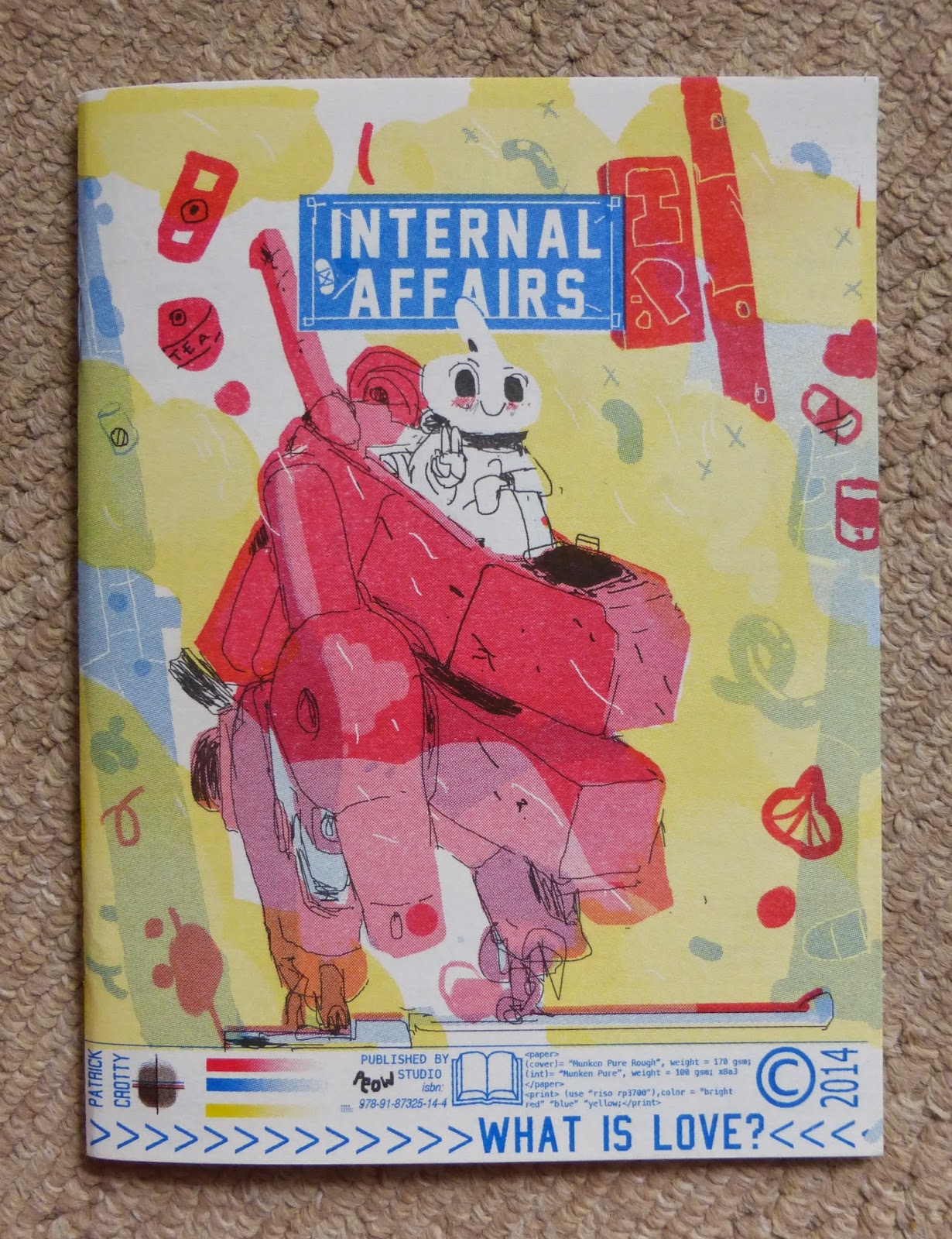 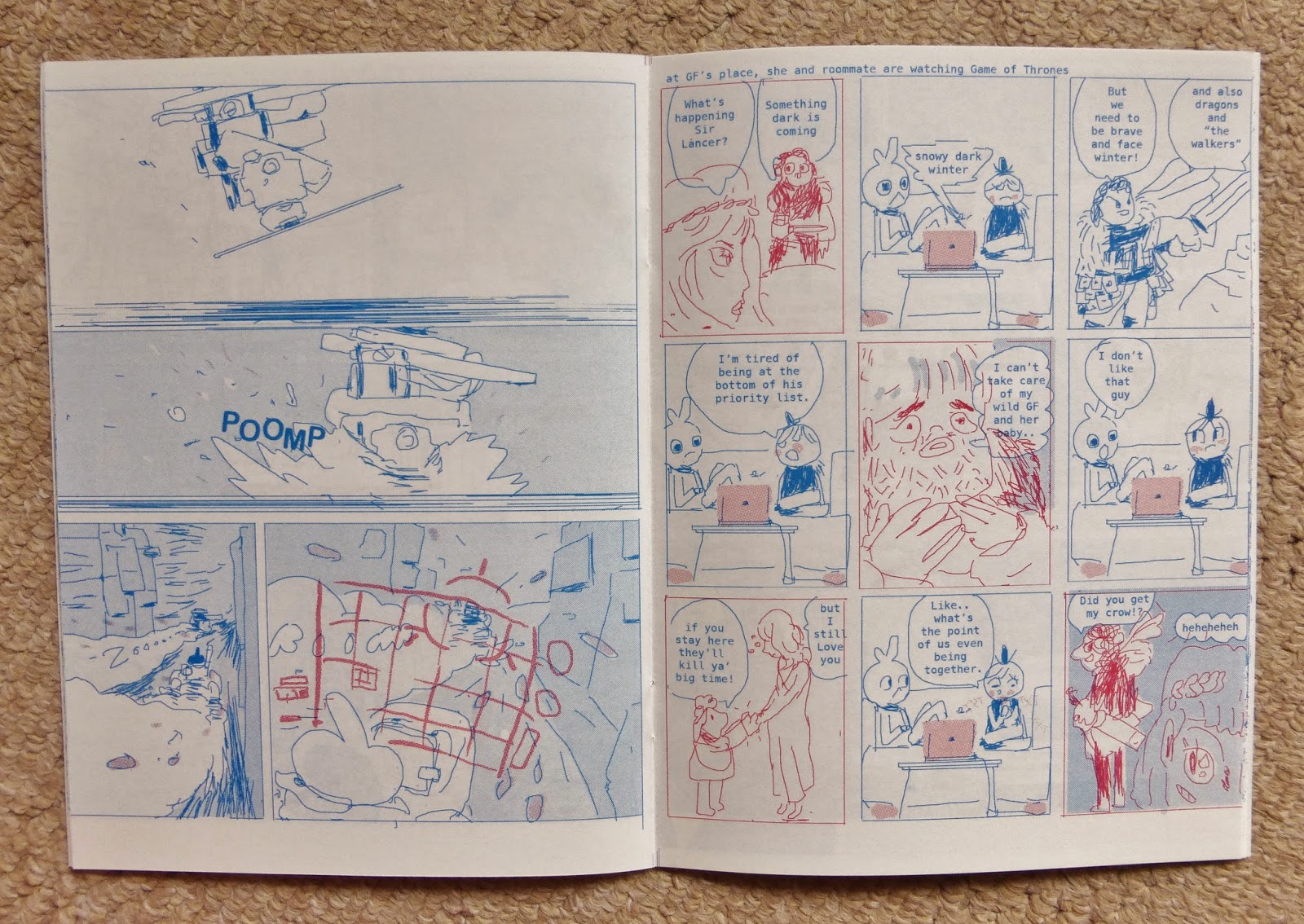 Internal Affairs What is Love? by Patrick Crotty, 32 pages, A5: Ah, this was a complete surprise, because for some reason I thought it was a new printing of Crotty's first Internal Affairs book featuring the bodacious Onion, but it's a completely new adventure, so that's exciting! I've not read it yet, for said reason, but the first comic took me by surprise in the best way. Out of everyone here, I think Patrick's work is probably the most unique, certainly the one that seems to be the purest in the sense of having and executing a unique vision, which extends to his art, as well- the amalgamation of babyish crayoned figures with adeptly rendered  vehicles and buildings, all of it veering just above the abstract. Here, Onion is still interning with a company in the big city, this time featuring more mechs, fights and even parties and romance.

And that's the end of that- I hope it's been useful in some way, if you were wanting to know a bit more about any book before buying, or maybe even as introduction to some of the work Peow do. You can find their website here.
Posted by Zainab at 19:21