One of the things I love about the comics shelfie feature -apart from getting to nosy around people's shelves and inducing serious book envy- is the way everybody takes to the task in their own manner. If you scroll through the tag, almost everyone has tweaked the set-up at least a little to fit it to their liking and personality. Today's comics shelfie is courtesy of Box Brown, author of the New York Times best-selling Andre the Giant, and the brains behind Retrofit Comics, the comics subscription that started it all, gathering the best comic authors and bringing them to your door. They announced their 2015 line-up last week, and it looks stellar.


'So, my bookshelves and comic collection have become incredibly unkempt.  They are in no order and things are just thrown in wherever. There is no order whatsoever except through daily life and use these books ended up together.  There are remnants from past eras of organization, e.g. MOME and the comics journal all together.  Even in those cases, there are missing issues of MOME and comics journal in other parts of the bookshelf not shown.  This is just a little look at my "collection" I'm not being cagey more just self-conscious because this place is pretty trashed. 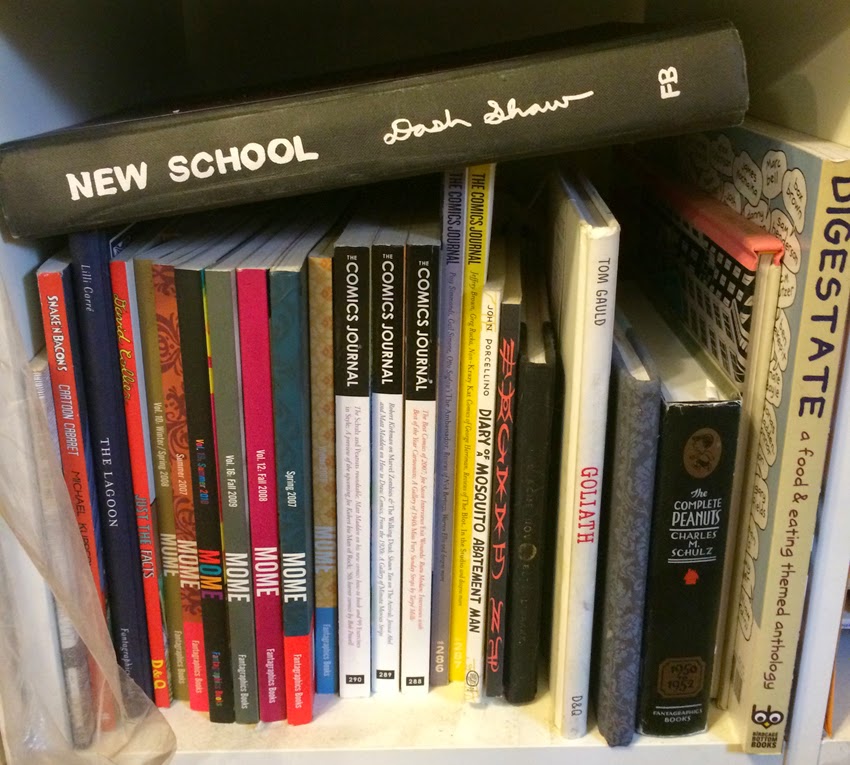 Here is where there is a remainder of some kind of order, but I have probably five more of those complete peanuts books scattered throughout the house.  The book with the alien writing is a Charles Burns "fake bootleg" version of the book The Hive.  The Death Ray is titled the wrong way and the blueish book is Chris Ware's ACME #20. 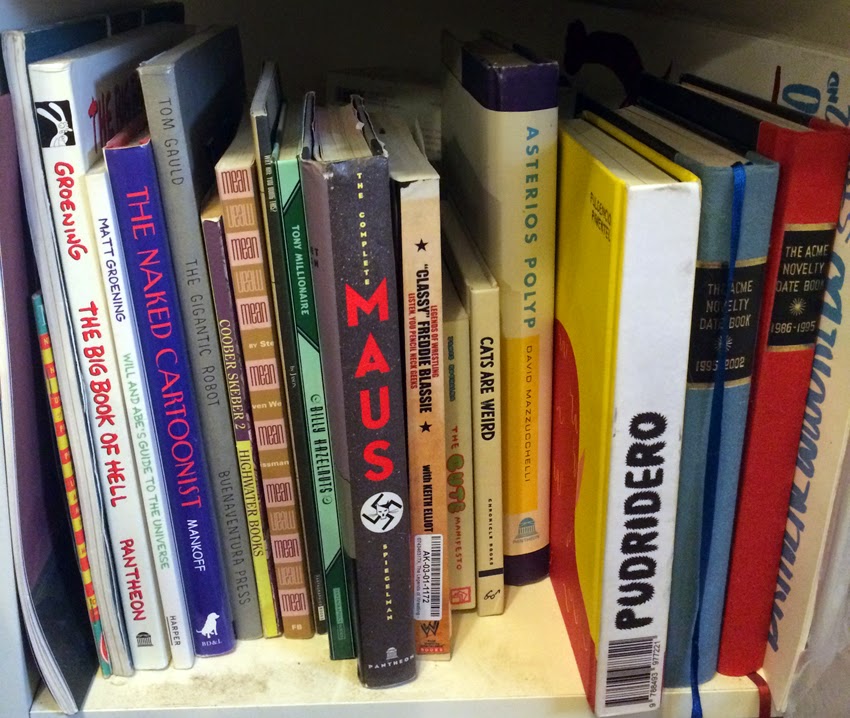 "Pudridero" is the Spanish edition of Prison Pit. 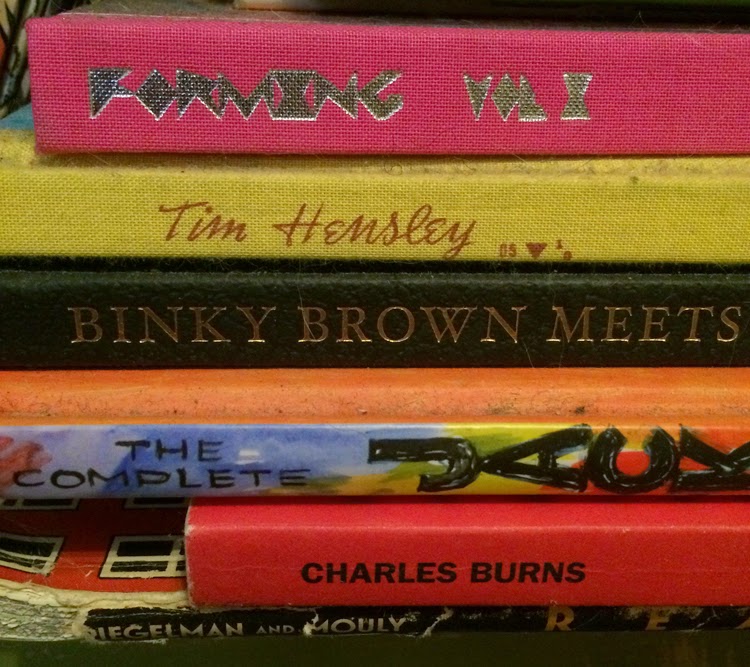 All these books lay flat cause they're too tall for my bedroom bookshelf.  The one is The Complete Jack Survives and the bottom one is a really beat up copy of one of the RAW reprints. 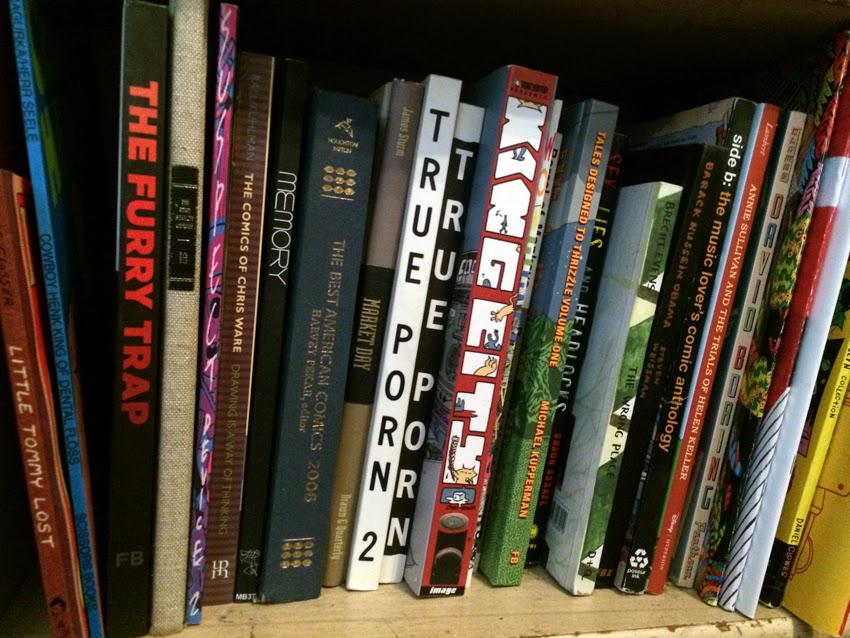 These are books from my bedroom bookshelf. 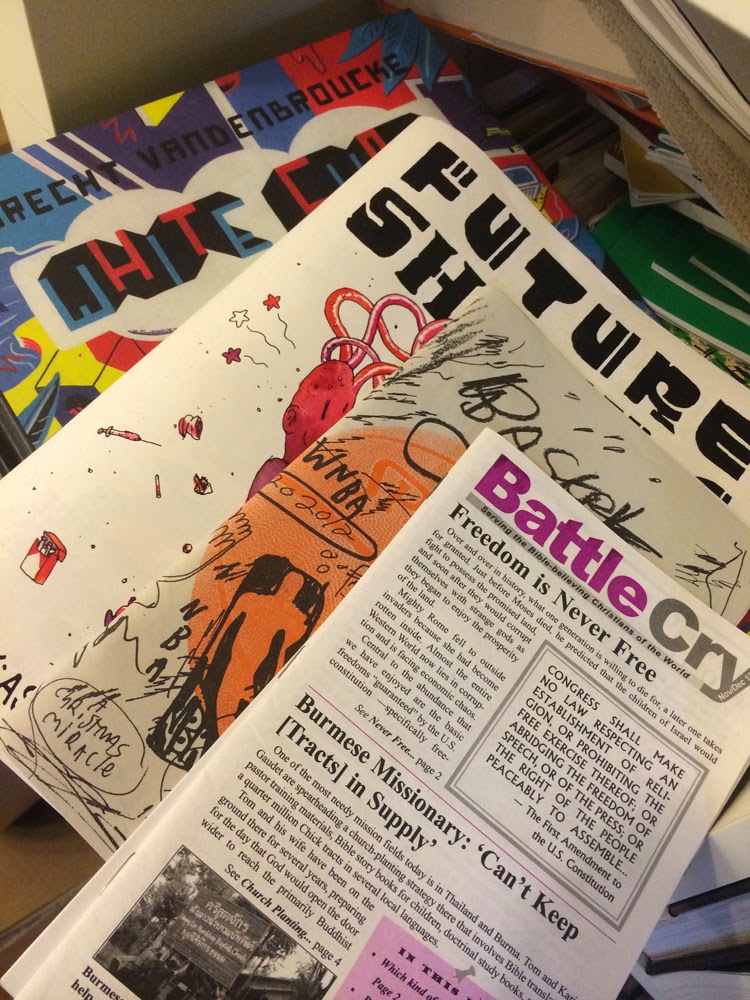 A good example of how things get all mashed together.  Here's a random pile around my book shelf. Brecht Vanderbrouke, Future Shock, Basketball Comics #1 and a pretty recent Jack Chick Newsletter.'

Many thanks to Box for his time and participation. You can view all the previous installments of Comics Shelfie here. Remember to stop by in a fortnight for the next installment.
Posted by Zainab at 07:43