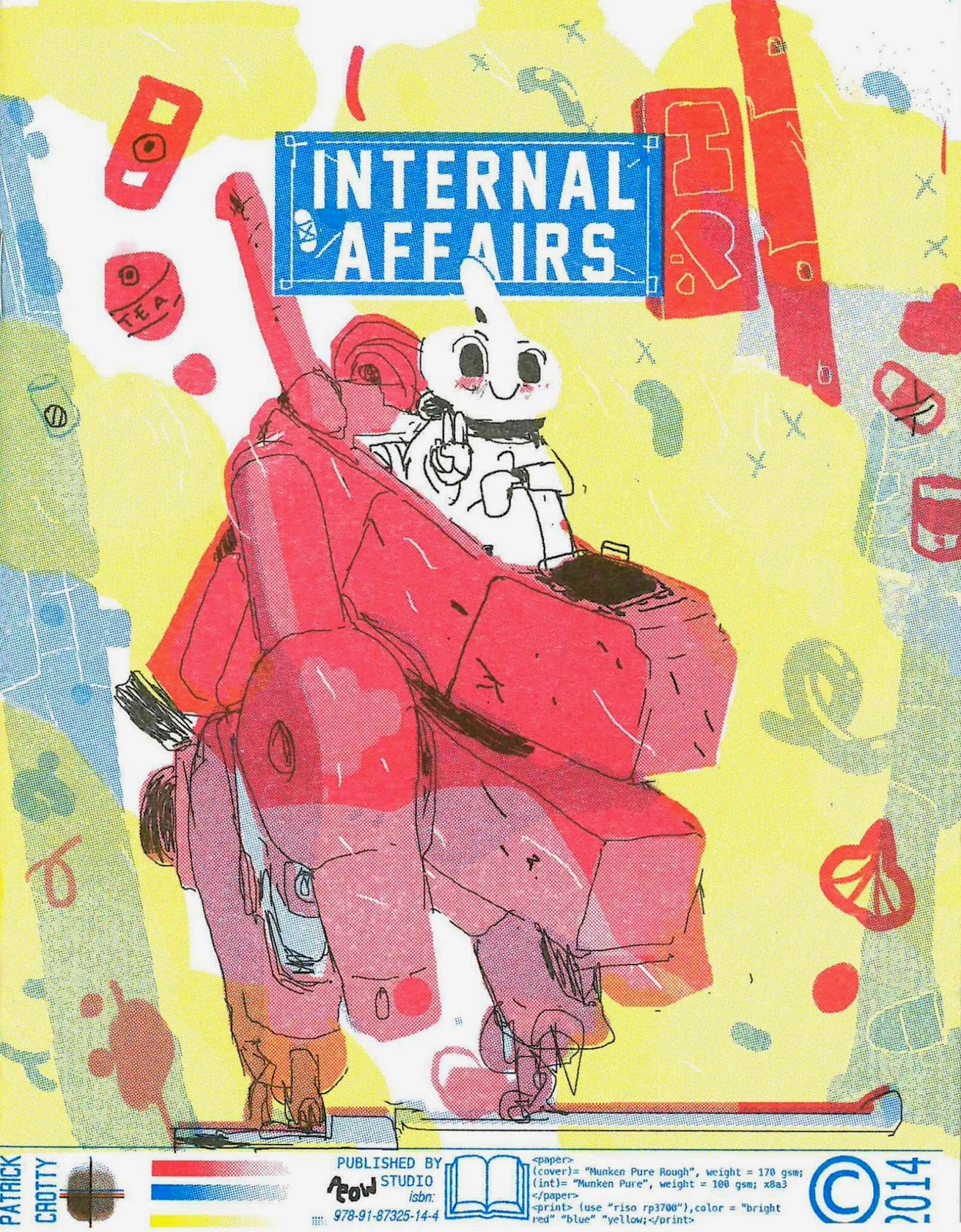 Internal Affairs: What is Love? by Patrick Crotty, published by Peow! Studio

I was surprised last year by how much I enjoyed Patrick Crotty's Internal Affairs, the tale of a young onion with a love for mechs interning in the city. I was surprised again upon seeing publisher Peow!'s 2014 releases, and realising that Crotty had done a follow-up, featuring the same character. In What Is Love? Onion is still happily interning at the big business in the city, still struttingly confident, and now with a girlfriend. Towards the end of the day, as he's getting ready to leave, he's dumped on by his manager, who's forgotten to arrange goody-bags and promotion for an event taking place that  very night, and passes the buck to an unwitting Onion as he exits. Initially daunted, Onion's on board when he realises the job will involve him riding in the new Mizuda GT, even as his girlfriend questions his priorities whilst (not) watching Game of Thrones with her room-mate. Things take a turn for the curious when the event is crashed by some saboteurs and Onion sets off in pursuit.

And you know what- it's something special.  I usually present reviews of shorter books and mini-comics grouped together as a capsule of thoughts, but I want to focus on what Crotty is doing here and show you some of these pages as larger images.

Below is the opening page of the comic and probably one of the more 'put-together' pages in that while lines and figures are sketchily done, they're not overly abstract; you can still clearly tell what they are. A few things I like here: in that top wide panel, Onion is picked out by the pressed crayon effect of his outline, making the blue and pink darker and more vibrant. In the second panel, he's amongst a crowd of people, but centralised, with the pink outline of his trousers (which only he has- everybody else is in blue) high-lighted by the pink shading on the tomato-man to the front right. There's a nice job with depth and perspective there, too, the commuter in the foreground closest to the reader  taking up a third of the panel, and cut-off as he walks away, the tomato-man slightly smaller, indicating a degree of distance, tapping away as he walks out of panel in the opposite direction, and Onion coming up third. Note how the buildings, storefronts, stairs are still accurately detailed- there's some ruling which has then been added to in a deliberately off-hand manner. 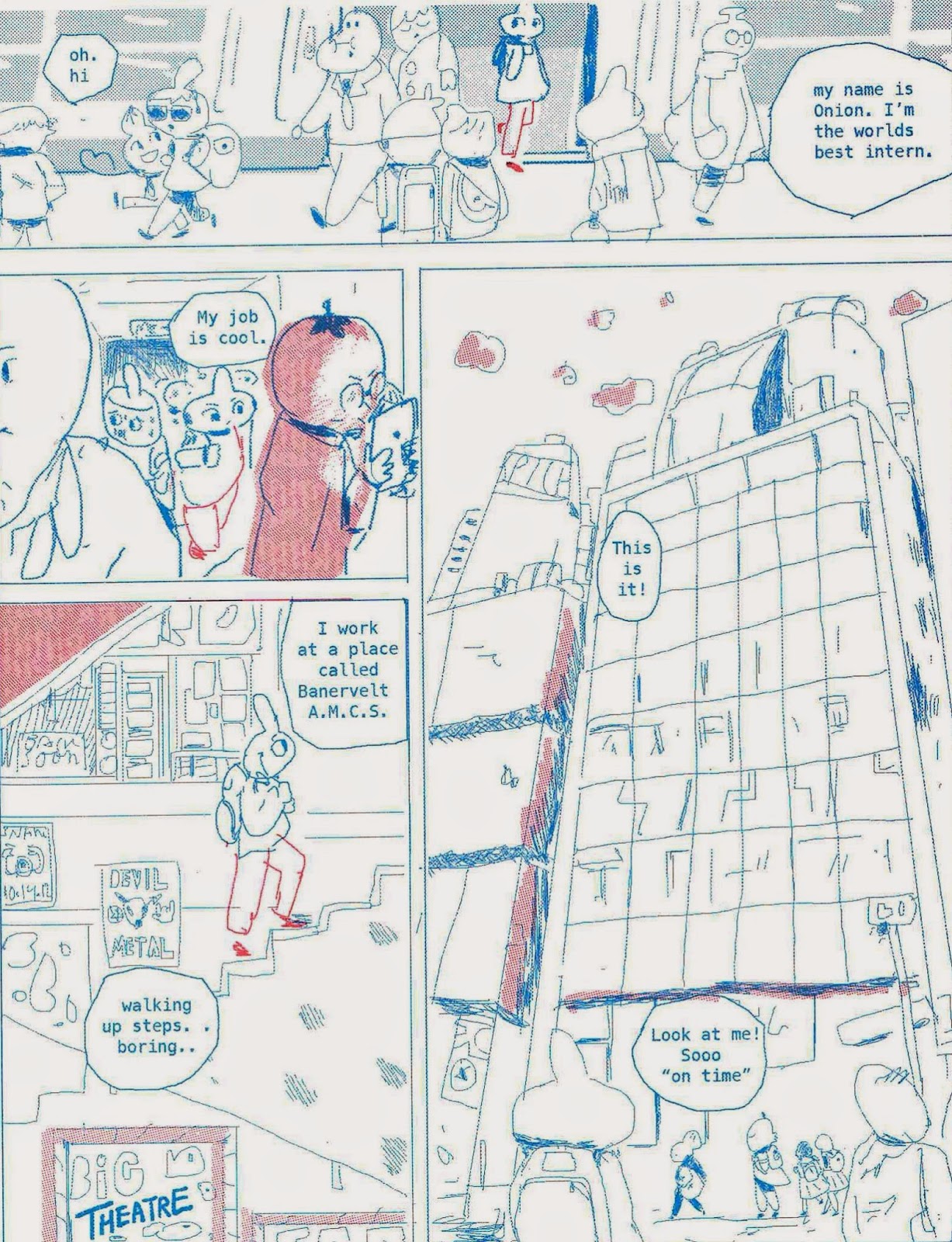 The way Crotty uses space is interesting- often with lots of white backgrounds, I'm guessing the risograph printing comes into the equation here- but the way he chooses to fill in that, and when makes for some effective comicking. In the page below, you have Onion at work in the office, beginning with a panel at which he's at his desk in the process of opening an email. It's a long-shot: you can see all of the desk and Onion in his chair, with his back to the reader: decisions which are paid off in the  juxtaposition of the next panel: a tight, head shot of  a wide-eyed, panicked Onion as the text of the email drowns and overwhelms the whole panel. Pretty simply done and rendered, so for the third panel Crotty gives us a panoramic view of the office, again using skeletal geometry and angular lines as a  base, here for the windows and outlined buildings, filling it with blocks of pinks, and then layering on a rough, shaded texture. Presented with the previous two panels, and the chairs and bar-trolley, existent only by their outline, the appearance of this sudden vista is quite beautiful. And yet still minimal. 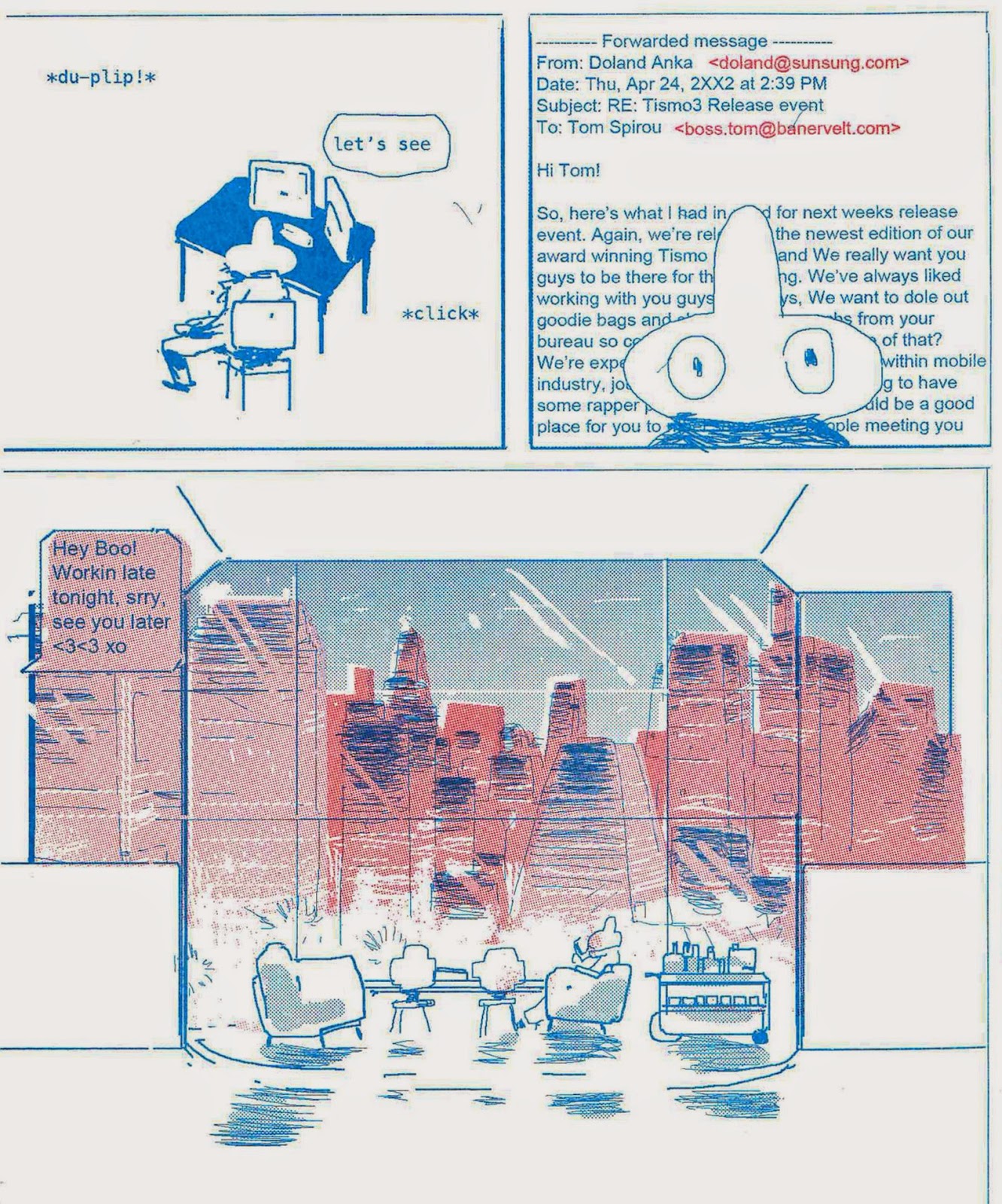 And then the page immediately after that which is just lines- the last two panels same, one with shade It's almost an inversion or evolution of the thinking that peak comicking is achieved when you can convey a maximum via the minimum use of lines: Crotty experimenting with how much can be done with lines, more, few, ruled, loose, what effect it has, switching between, bringing in colour to see what that does. It's a one and done feeling- as if he puts pen to paper and simply draws lines- continuous lines, and then manipulates the riso colours to lend a bit of shadow and ambiance. Look at the bottom two panels here: no texture, just lines- little rectangles for computers, a circle for the back of a chair- there's a remarkable balance between the loose, organic feel and having these objects identifiable; a studied laissez faire. The window in the background with the blotch of colour provides a nice pop. 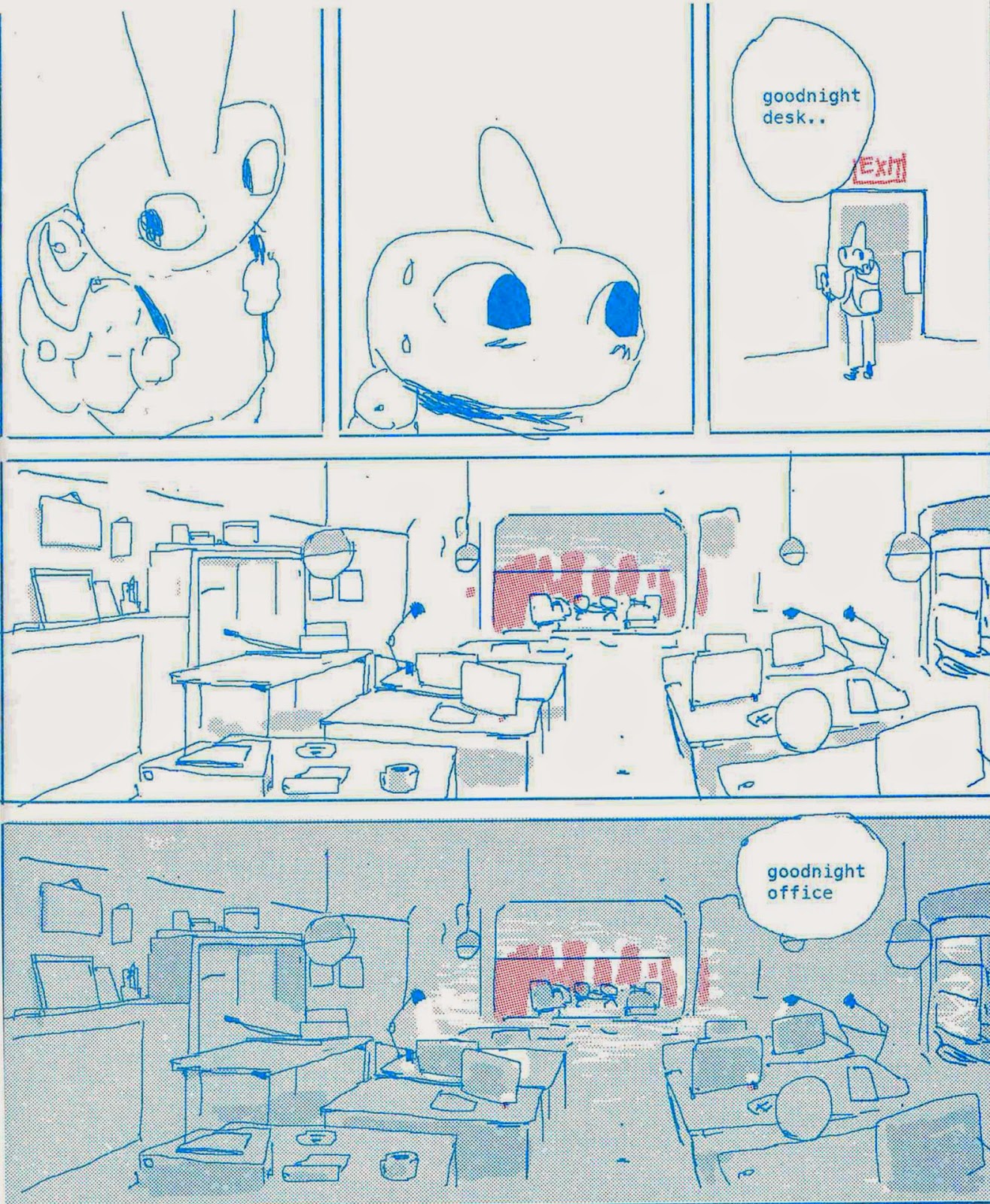 I've seen variations of naive and abstract art-stlyes, but nothing quite as comprehensively realised- the specificness of what Crotty's doing here really gets me. Whenever you begin to appreciate something you formerly failed to see any merit in, it's takes on angels singing epiphany, 'zeal of the newly converted' aspect, so there's a degree of that at work. Contrary to the laid-back, too cool to try vibe it emanates, there's a whole lot of thinking and construction gone into this. As the comic pushed towards it's final effect, the crescendo's reflected in the art. Here's another example: in the page below, the top three panels show Onion in the background, picked out only by his eyes and the faint difference in colour, which, coupled with the small, tight boxes emphasise his indecision and ineffectuality. The harsh red lines gradually encroach- initially loose and then taking a certain grid form, block letters blaring.

The page opens up to the wide panels of action: Crotty's colours and motion lines directing the gaze and injecting dynamism: the block writing getting closer stretching out, focusing in. 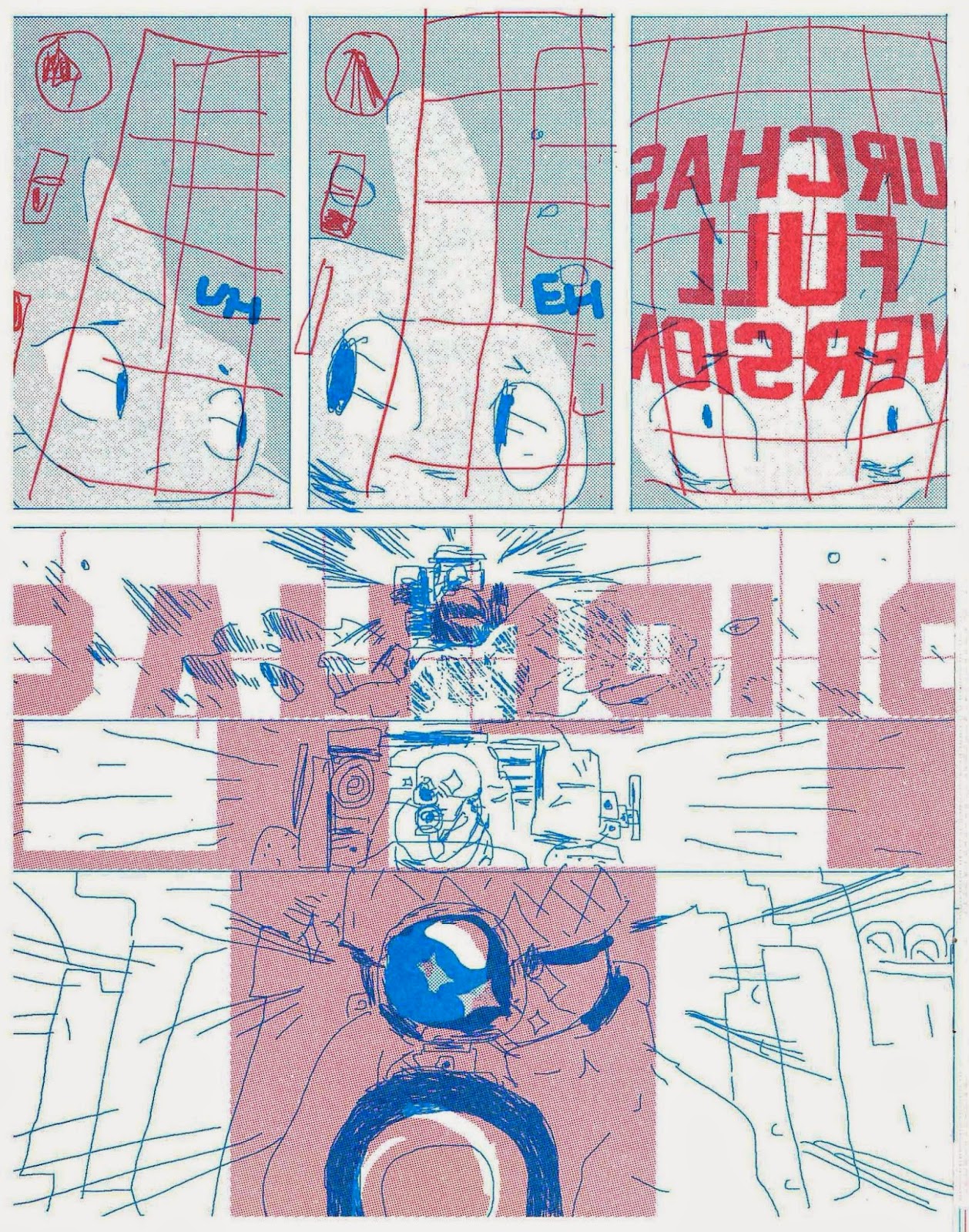 The very next page you get this page: all in with the texture and shading now as things get serious, save that one panel which serves to break up the tension: an exaggerated, literal display of life passing before your eyes, a blend of rose-tinted memories and the the equivalent of seeing stars and birds. A switch to the inner thoughts of a cartoon and back. 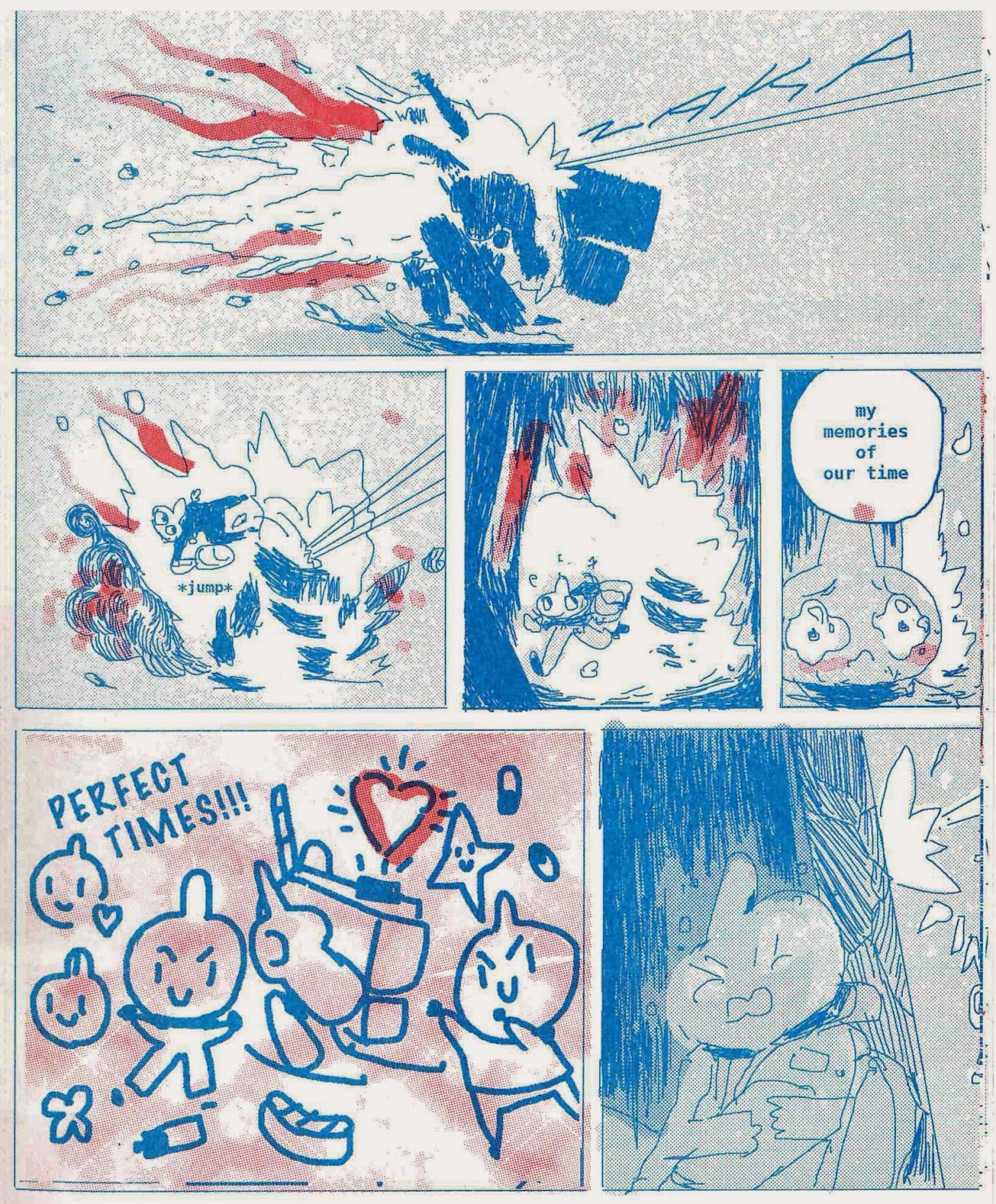 I've waffled on for quite a while, intelligibly, I fear, but I appreciated this comic so much and I hope I managed to convey some of why. Apart from anything else, you can see how much passion Crotty has for his work, and how much  serious care and thought is put into creating something that is ostensibly fun in nature: the fine execution of a singular, silly, but wonderful vision. It's a unique a book I've come across, with a heck of a lot going on, the plot of which is the least important (there's so much more than narrative to be got at here, it serves as a vehicle for stylistic ideas and function)- which reminds me why I love and am excited by this medium.

Peow! books generally have great production values, but what I love about Crotty is that he likes to add all kinds of kind of minutiae and detail to his comic- this time the interior covers- both back and front carrying diagrams of the Mizuda GT, the Brioche eatery hot-spot, quasi-fictional tweets, as well as they type and weight of paper it's printed on. It's this attention and what I'm sure others would consider pointless add-ons that make it for me. So refreshing, and so very, very excellent.

The first Internal Affairs book, although sold out through Peow!, is still available from UK distributors Impossible Books,  and this second installment is available online here.

A look at those interior covers: 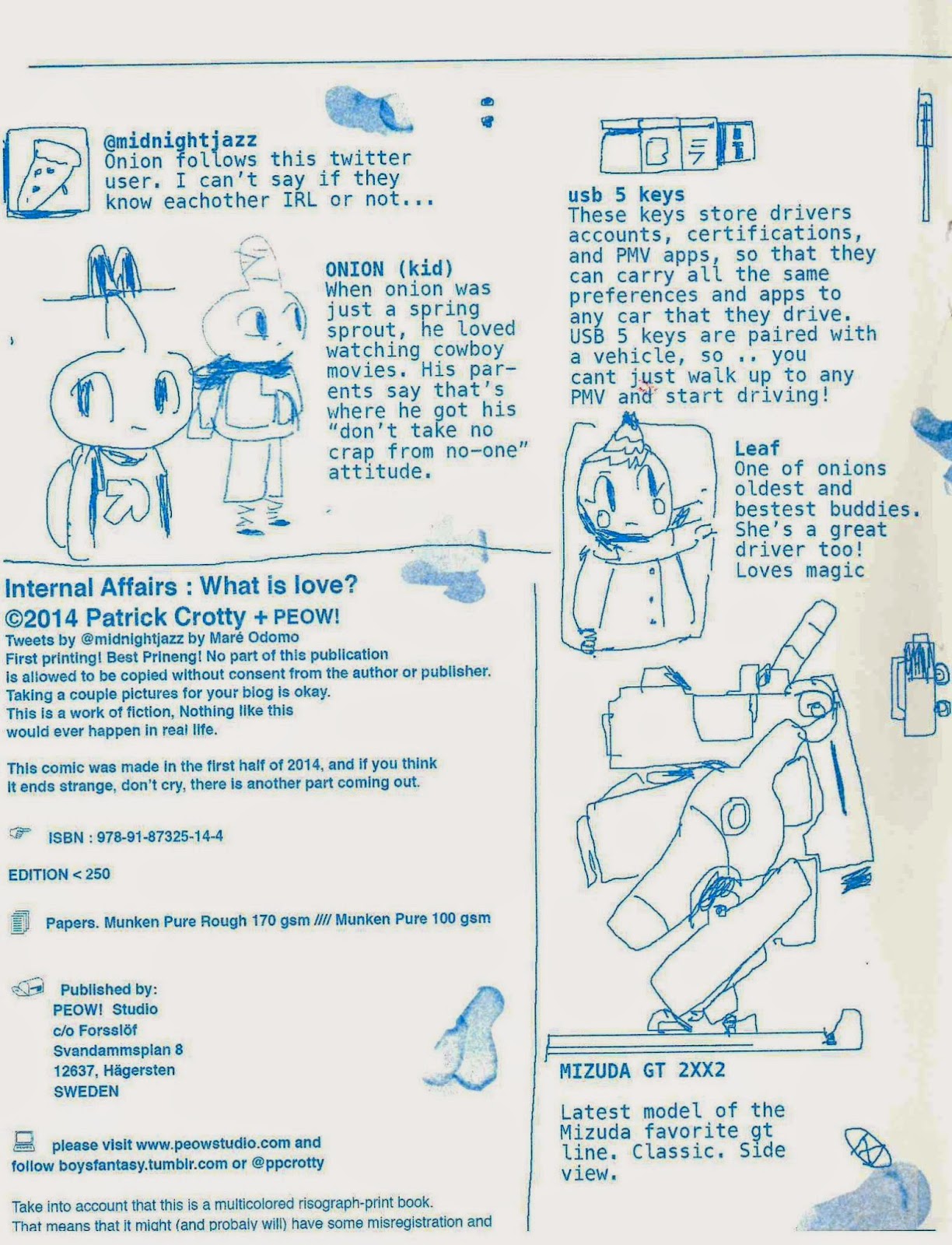 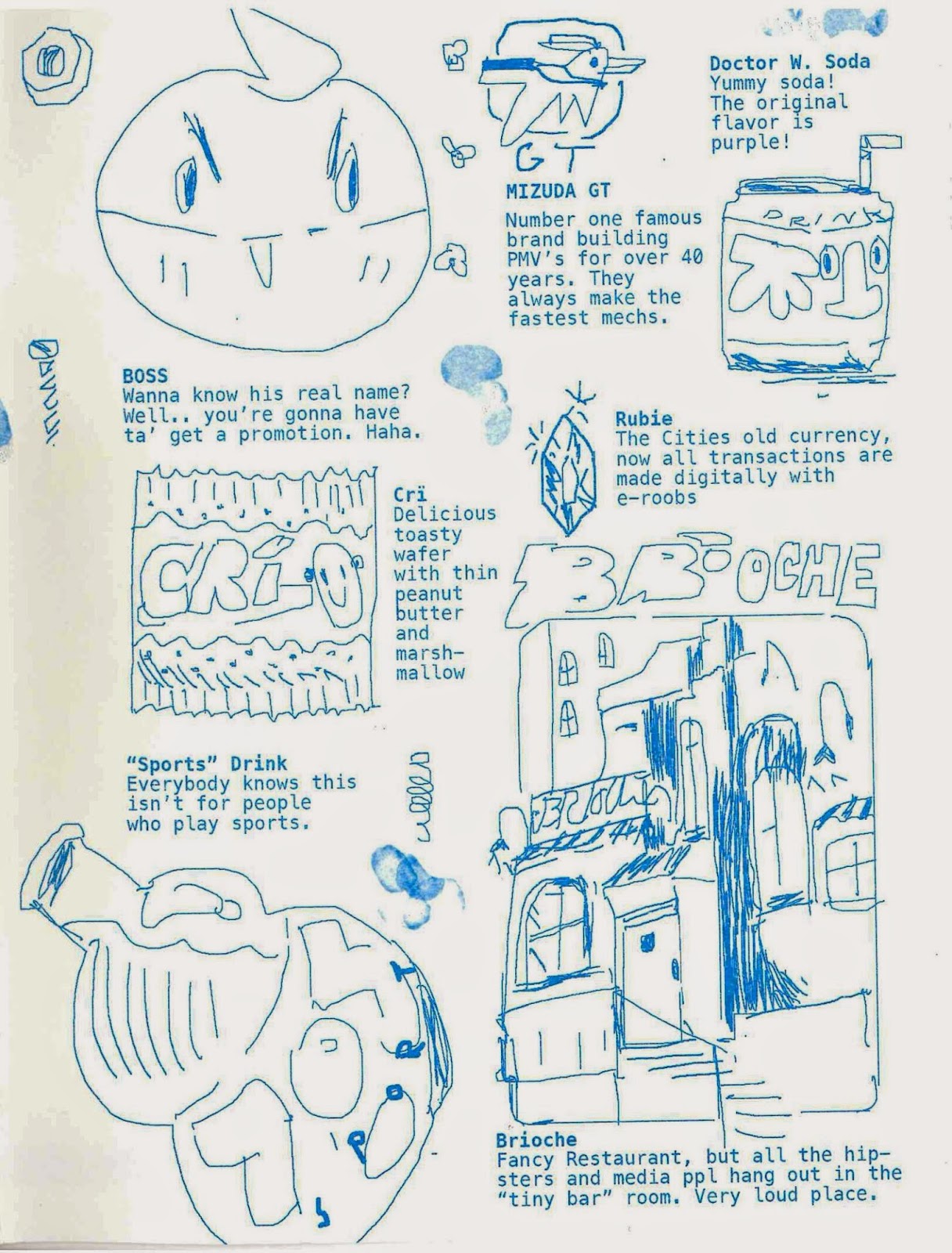