Pippi Longstocking: a hero for all times 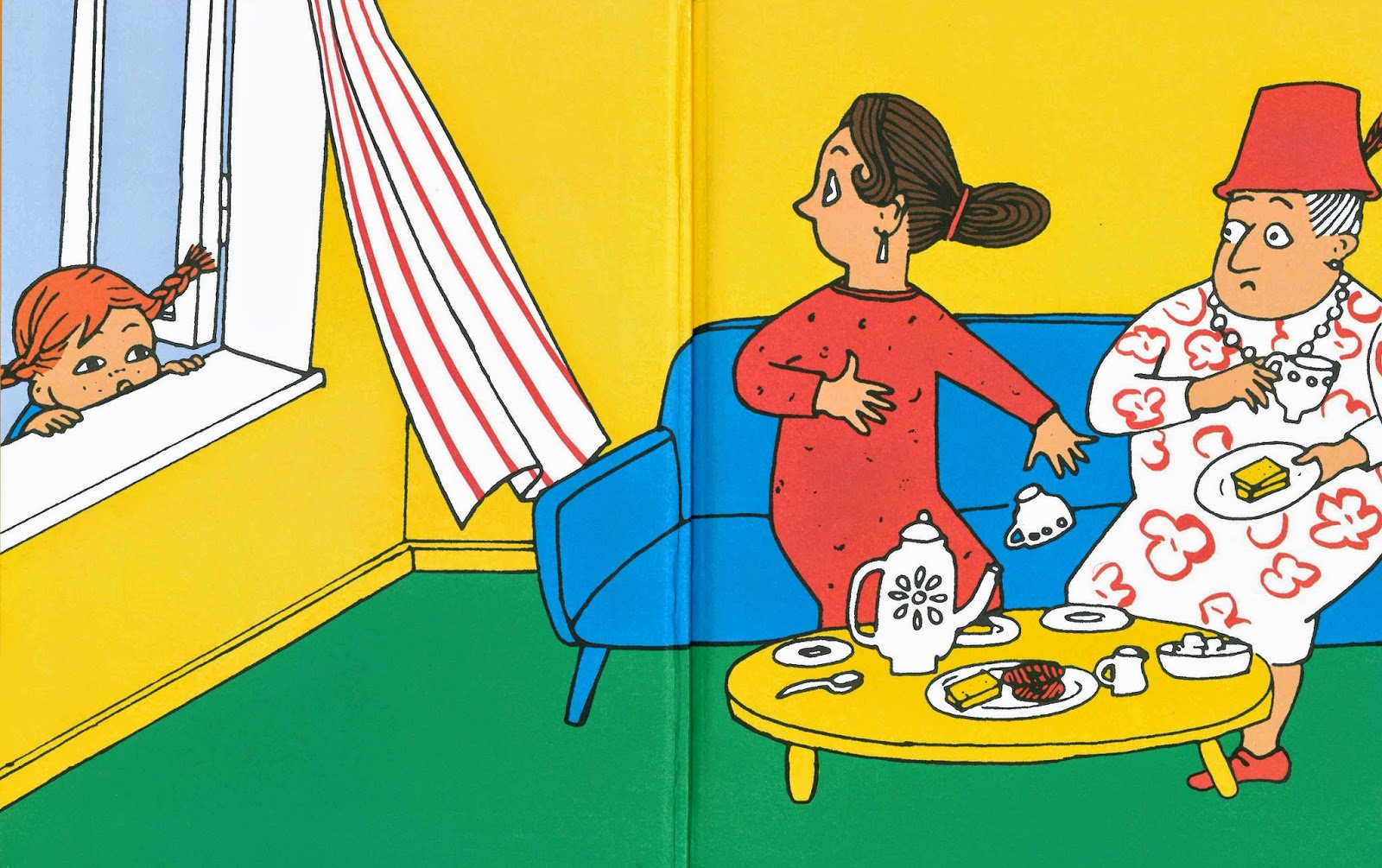 Two of the best all-ages comics are currently being published by Drawn and Quarterly, and both are English language translations of European comics. I've talked about Anouk Ricard's excellent Anna and Froga series previously, and hope to do so at greater length in the future, but today I want to talk a little about the Pippi Longstocking comics D&Q have been releasing- the third volume of which- Pippi Won't Grow Up- is due for publication this October.  Although aware of Astrid Lindgren's iconic character, I never read Pippi as a kid (or later) so I have no prior attachments or associations (having also managed to miss the movies and TV show), which may have contributed to my loving these comic off the bat. Interestingly, these comics were written by Astrid Lindgren herself, and illustrated by Ingrid Vang Nyman who was also responsible for the chapter illustrations in Lindgren's Pippi prose books. Originally published in Sweden, they ran in Humpty Dumpty magazine from 1957 and 1959, as an expansion on the books: 'the further adventures of Pippi' sort of thing.

Translated by Tiina Nunnally, I was surprise at just how taken I was by these; I often find some older styles to be impenetrable and static, and there's certainly an element of that here, but it's played of by the bright colours and the personality and character of the book and Pippi. It's served well, too by the sheer oddness of some stylistic choices- a major one of which is the way in which Vang Nyman renders the children's eyes- a strangely un-moving almond shape, while giving the adults the traditionally rounded oval peepers. It has a slight flat-eyed, creepy Chucky doll effect initially, but as you go along, it settles and becomes one more quirky thing amongst several, all of which meld together to give the book its unique tone. Van Nyman's style is probably in vogue as appropriately retro now, but that aside it carries its age very well, and her familiarity with the subject matter feed into her ability to complement Lindgren and infuse the text with deliciously off-beat humour and a distinctive weirdness. Words like universal and timeless are frequently bandied about, yet when they are truly applicable to a work, it's a hallmark of how remarkable it is: that it can be read years later and still delight and resonate.

Having not read the Pippi books, I'm unfamiliar with the line they take, but here the narratives have a strong vein of genuine oddness that Lindgren plays straight. In the first book, Pippi moves to a new town, on her own devoid of parents or guardians, filthy rich, buying out sweet shops for the neighbourhood children, a lot of classic childish wish-fulfillment. But she's also the strongest girl in the world- tossing cruel circus handlers over her shoulder, wrestling with tigers, throwing tired horses over her shoulder: 'Everyone should be nice to animals, and carry them when they're tired.' Lindgren inserts quite a few ideological nuggets: Pippi doesn't go to school, and when she attends curiously to see what her friends get up to all day, she doesn't understand the rigidity of the structure or thought, which leads to some wonderful exchanges between her and the teacher:

'All right Pippi dear, let's see if you can add. How much is five plus seven?'
'Shouldn't you already know that?
'Pippi, sit properly! And five plus seven is twelve.'
'See, you knew all along. Why'd you ask me?'

Or ' 'I' is for Ivan the hedgehog' says the teacher, holding up a picture of a hedgehog with the letter 'i.' written next to it. 'I don't buy it. I think it looks like a black line with a spot on the top.'

Of course, sometimes she gets things wrong, like not knowing how to behave properly when invited to dinner, but for the most part she's everything you'd want in a role model for children: individual, strong, fearless, loyal, smart, resourceful, and independent. Pippi doesn't have a mother, but in the second book, her father turns up for a visit (although not before she's intercepted and dealt with a couple of robbers who break into her house in the middle of the night), with whom she has a fantastic relationship, and they have a splendid time together, as further hi-jinks ensue (you begin to see where she gets it from). I am, ostensibly, an adult and I enjoy these books immensely- the spirit in them is so vibrant and individual and natural with it- singular, refreshing and unlike any other kids books I've come across. I don't doubt that they'd be a huge hit with children too. 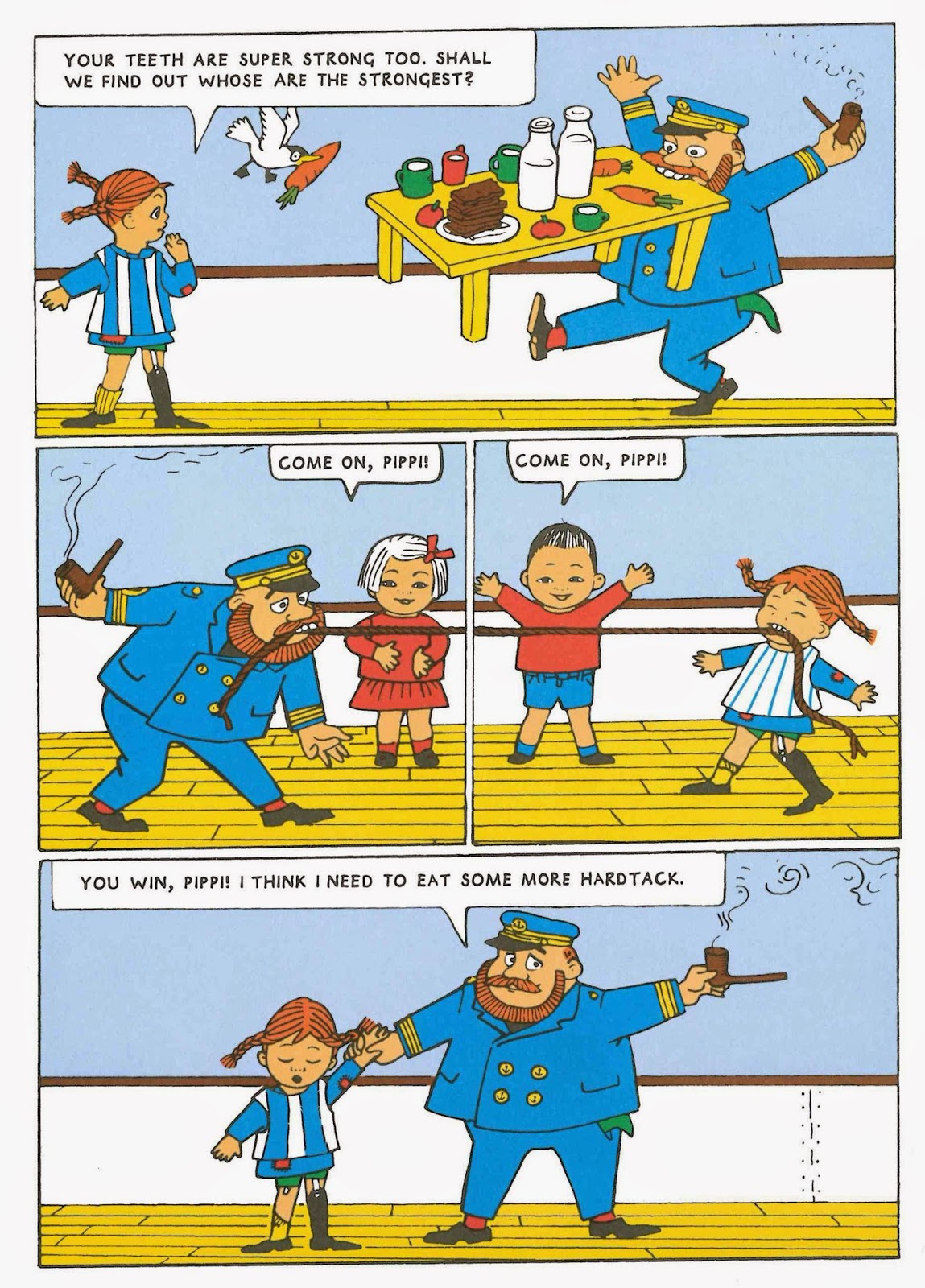 I really like this page (below), particularly the final panel of  the yellow burning house: the stylisation of the licking flames and contrasting blue window frame, the angles and red of the old-school fire engine and the fire-men's uniforms, made complete with Pippi throwing her arms up in delight and exclamation: 'What a blaze!'. That panel of Pippi riding heroically to the rescue on a white steed, her faithful little monkey accompanying her is pretty great, too: 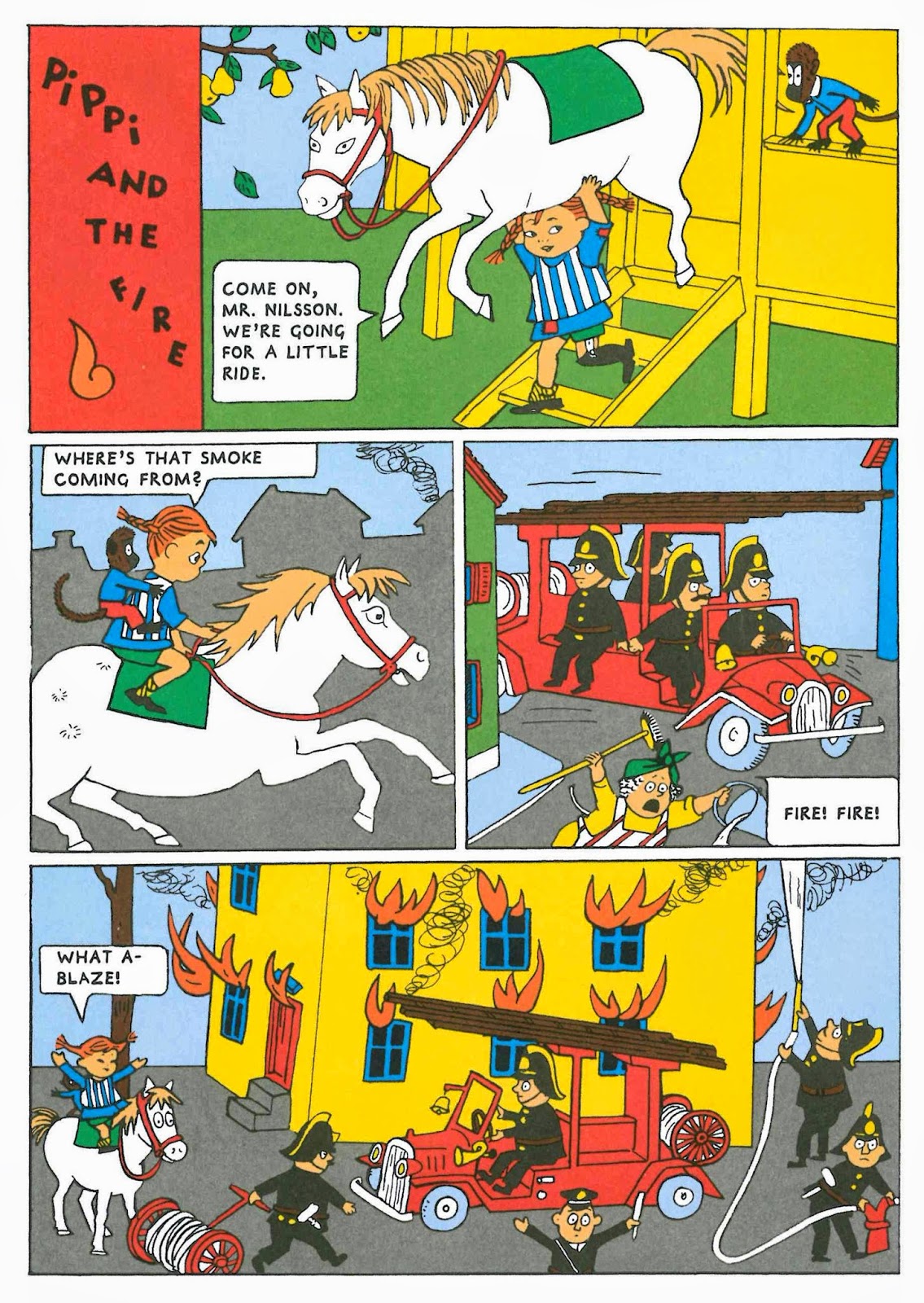 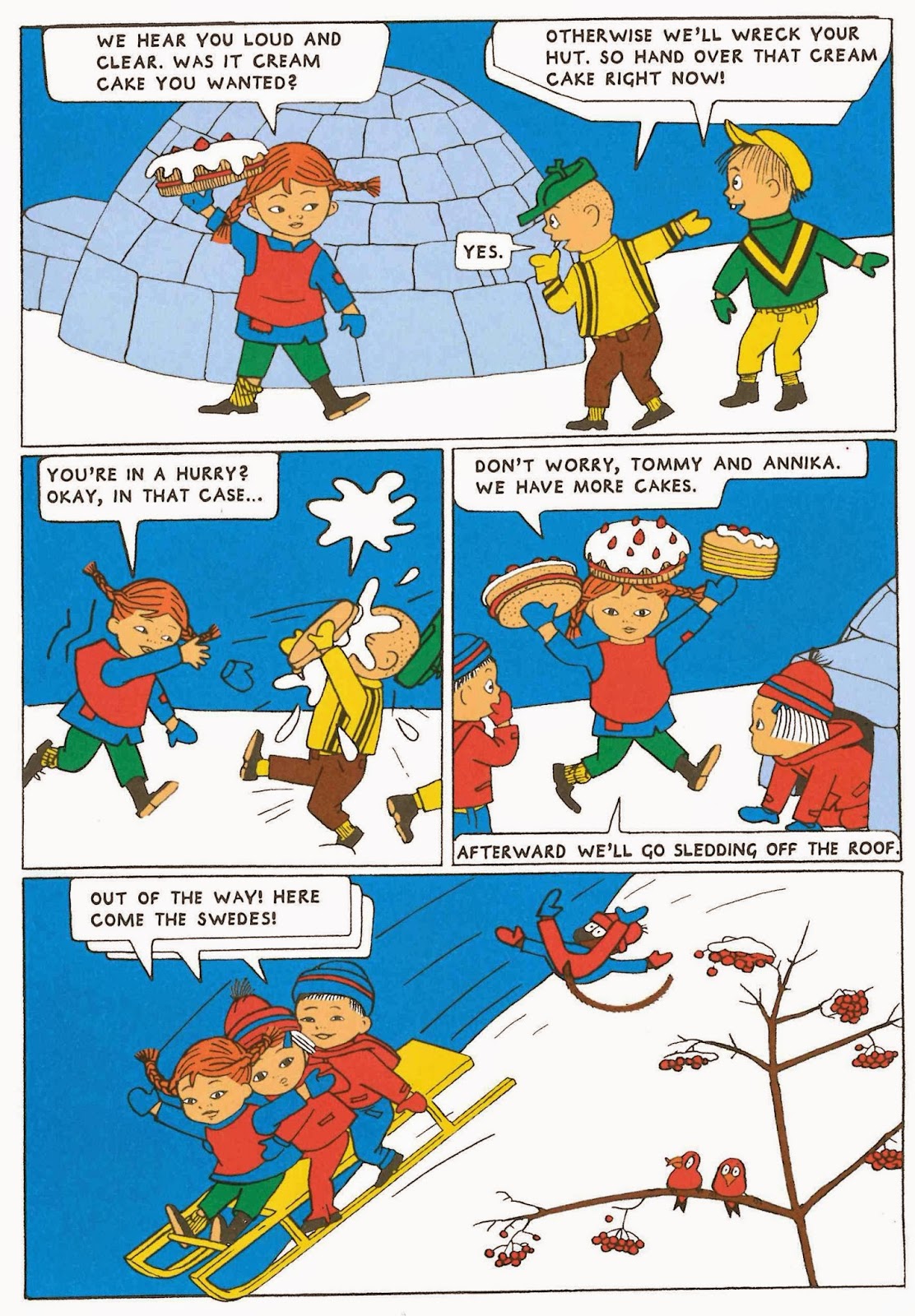 Attempting to get rescued after losing their boat: 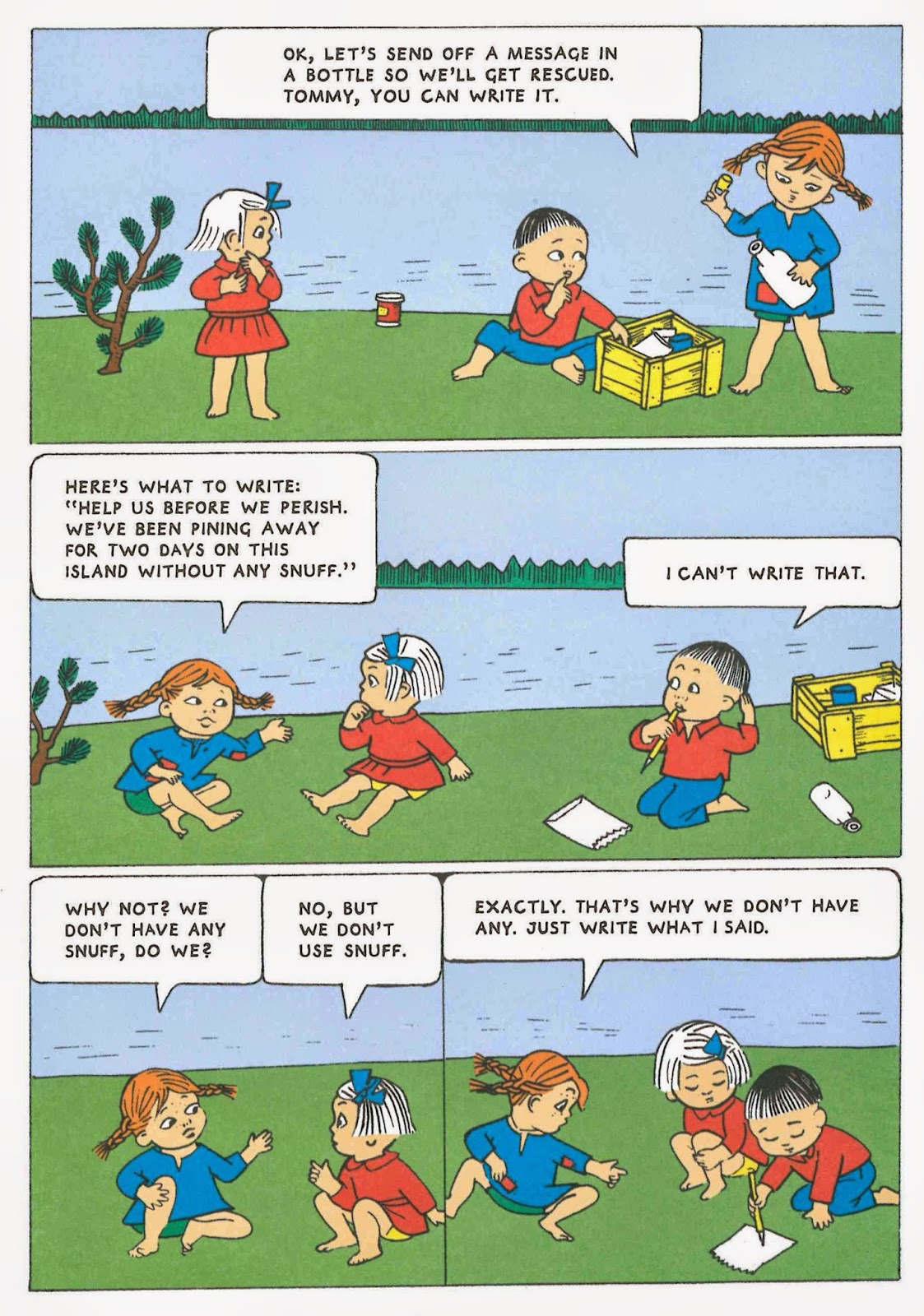 D&Q have done a superb job with these books, hardback with spot-glossed covers, and gloriously bold end-papers, and double page spreads at both the beginning and end. 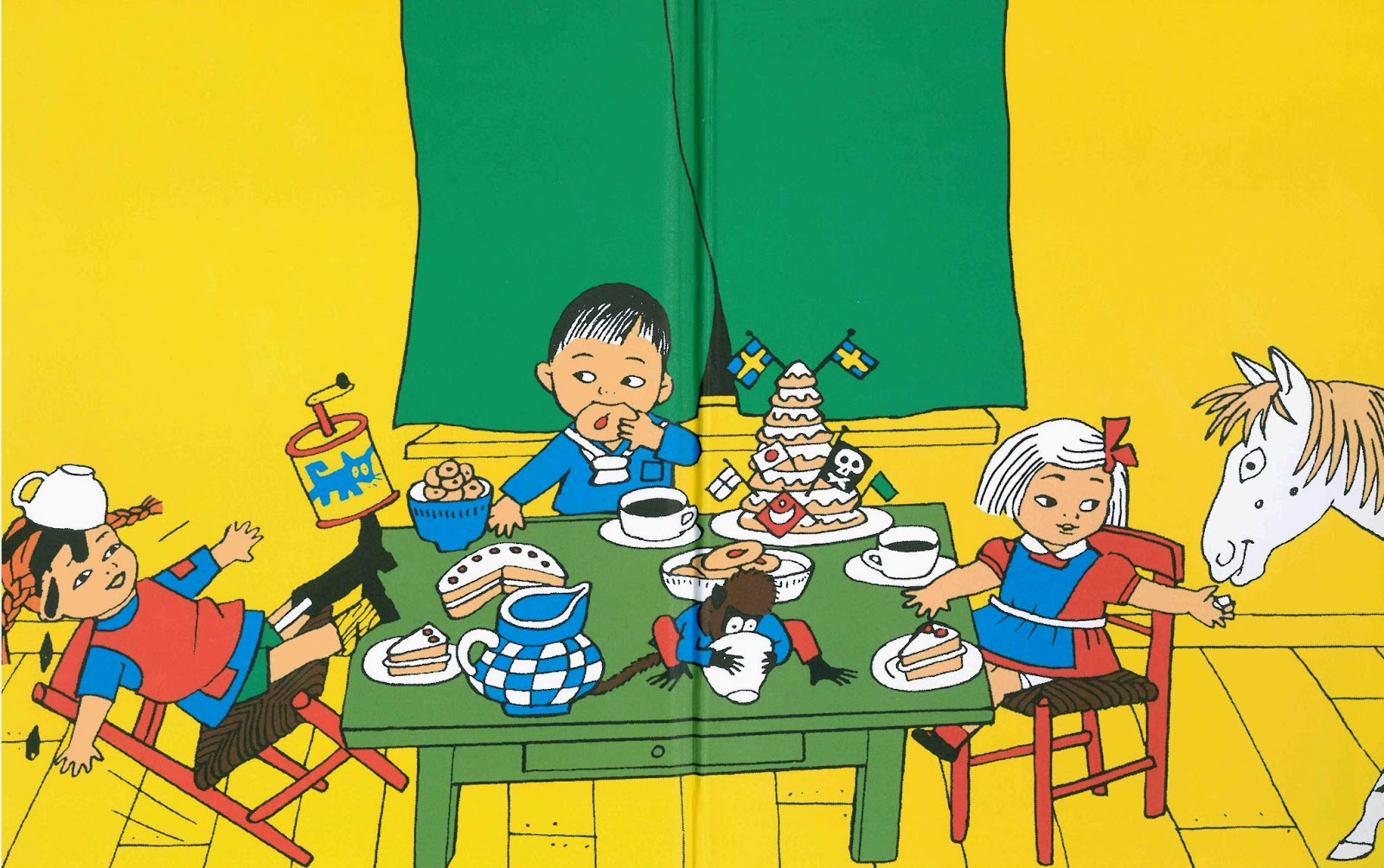 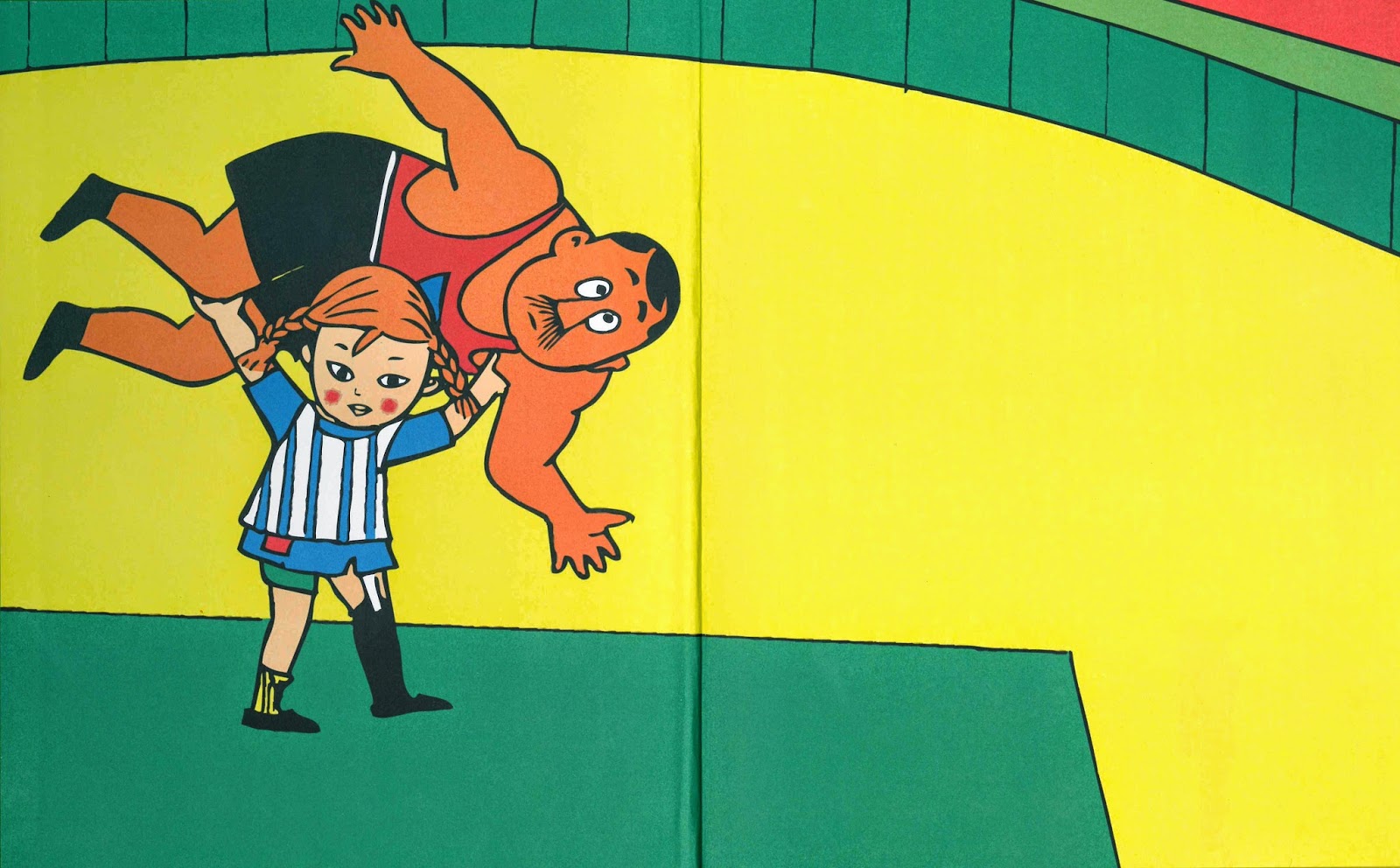