The more he saw, the less he spoke

I worked my last day at the comic book shop yesterday- I currently have 2 jobs: my main one working 26 hours at the library and 1 day a week at OK. I left to concentrate on writing- I guess I have to pitch and get my arse out there more, which is time-consuming and scary, because all I sort of know is comics and it's long been established nobody wants to pay for words on those. But we'll see- 'if you never try, you'll never know,' right? I guess the ideal would be to expand into my other areas of interest: sports, culture may be, but nothing feels as good as comics. I'm gonna give it a good shot, I don't think it's an unrealistic goal, and I don't want to have regrets that I didn't try my best over doing this one little thing, when, a few years down the line, circumstances have consolidated in me getting a proper full-time job. So, I worked my last day, and I was pretty bummed about it, but to be frank, it was the best decision. I am no seller of anything, especially not comics, where the majority of people who come in want to know about superhero lines of which I have no knowledge and even less interest, and my pretentious ideas of ideals get in the way. I like to think my face is rock-like in its inscrutability; it is not.

Anyway, I panic-bought a whole bunch of comics (staff discounts are not eternal), despite having no room and no time to read the already amassed, teetering piles of books in my room currently inducing equal levels of anxiety and comfort. Most of these are older releases, which I like, because I feel less pressure to write about them within a certain time-frame - trying to get out of that mentality/impulse where I want to write about every good book I read- unfeasible and tiring. Below we have Jules Verne's Twenty Thousand Leagues Under the Sea, adapted by Gary Gianni, and 5 is the Perfect Number by Igort. Gianni is probably best known for his work on the Prince Valiant newspaper strip, and while that cover's not really anything special, he's done such a magnificent job on this- I took a couple of pictures incorporating two of my favourite splash pages- the divers in their old-school suits, and Atlantis. It has that traditional illustration cartooning feel to it: leaning more towards the realistically rendered, with a more subdued colouring palette, which I like in these kind of tales, it adds a gravitas and gives the story room to breathe- especially when you're telling a story as fantastic as this- anchoring it in the familiar offsets the unbelievable elements of it. 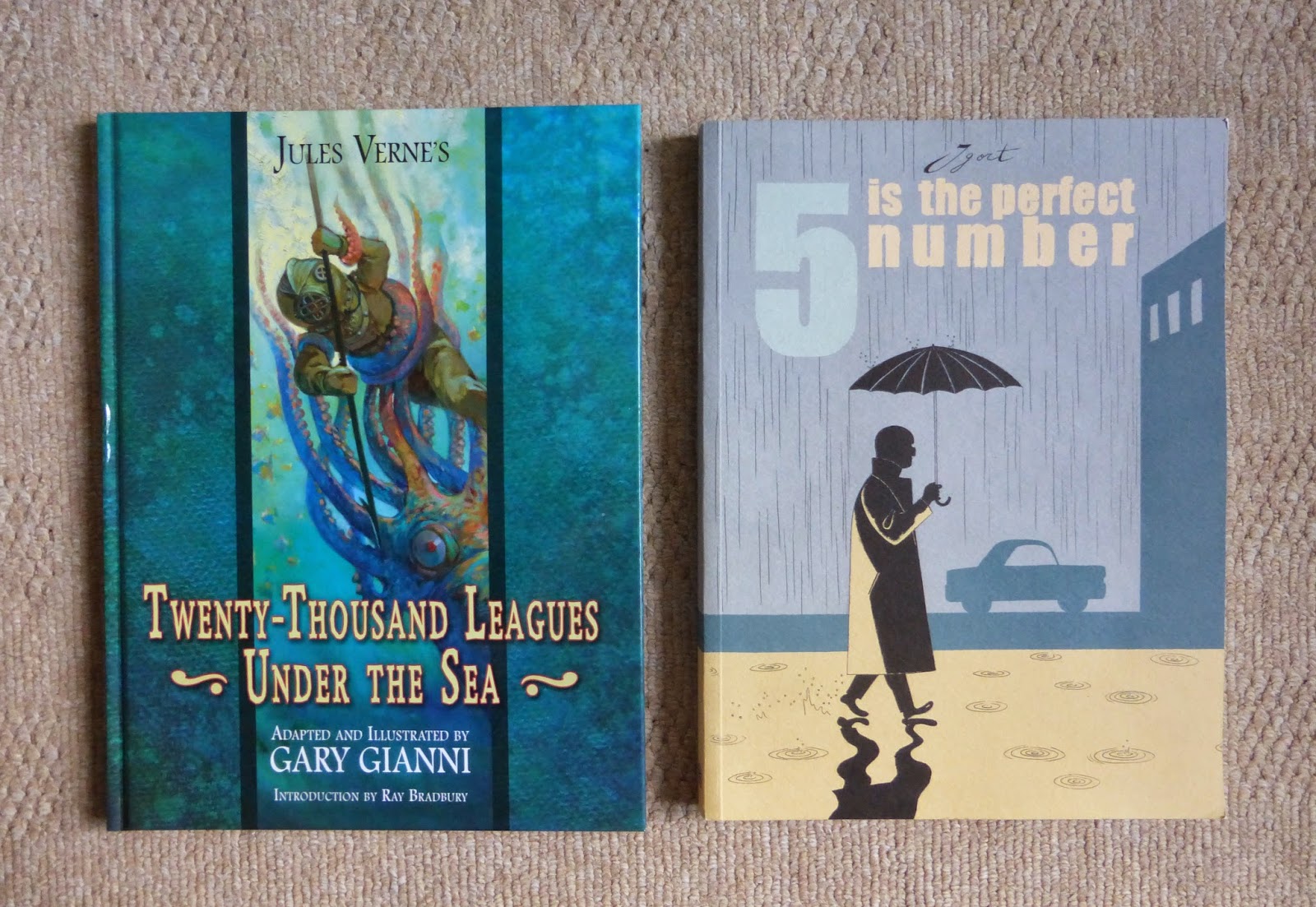 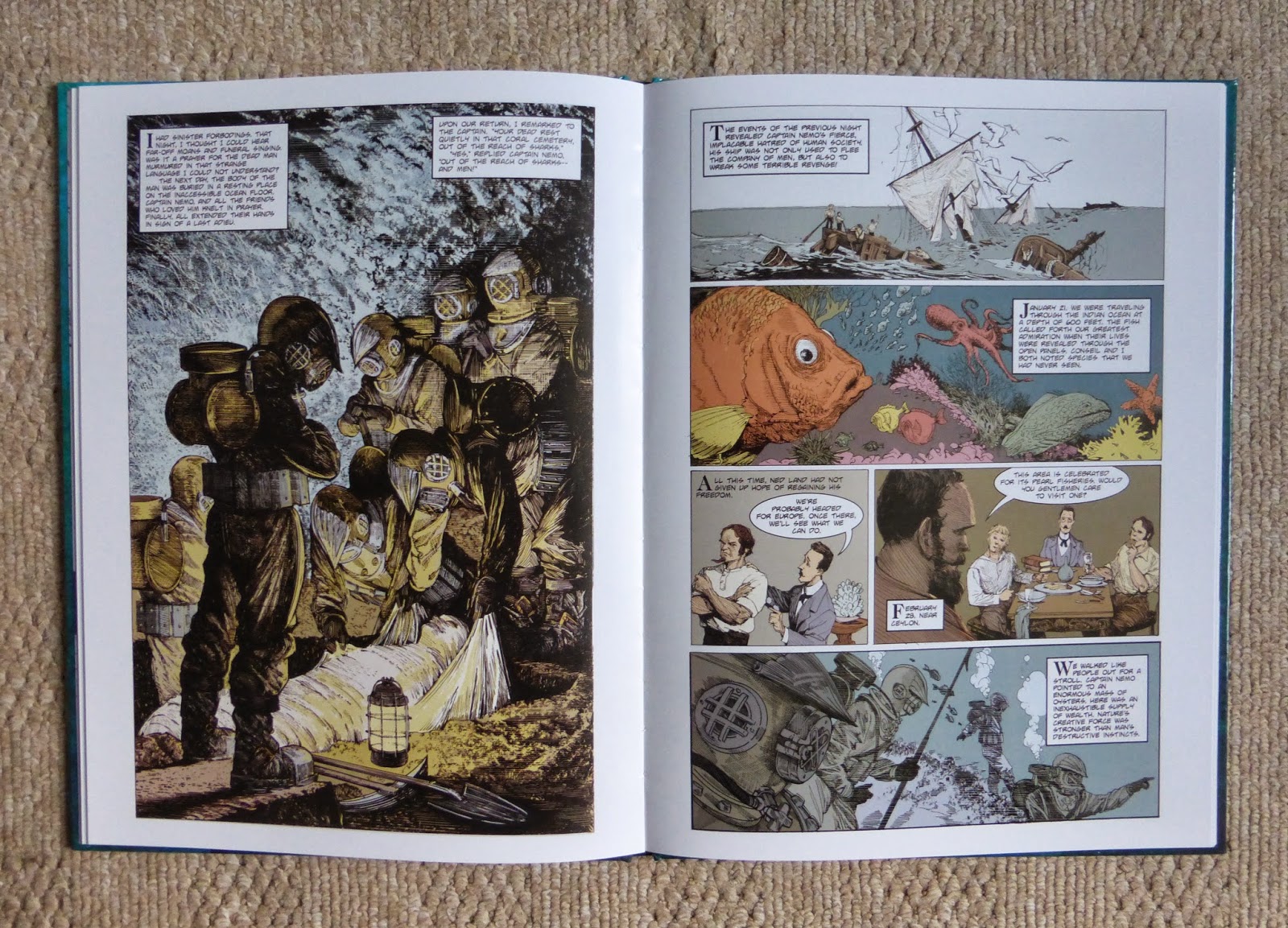 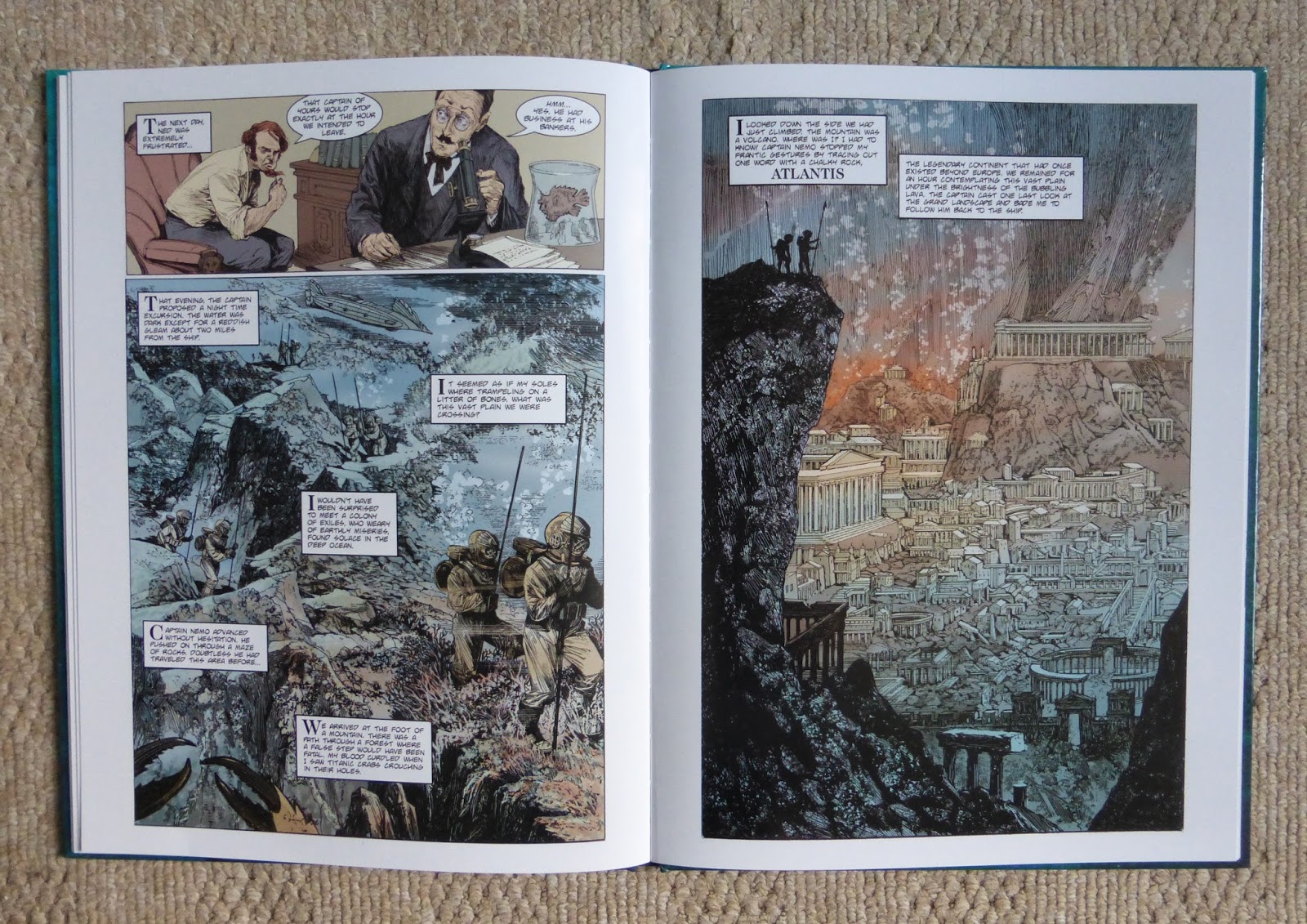 Igort's 5 is the Perfect Number is another of those books that's right in my ball-park- with descriptors such as 'hard-nosed modern noir' and 'the best crime comic of the past five years,' a story about an old mafioso who comes out of retirement to investigate and avenge the murder of his son. I blame everyone for not telling me about it earlier. Part of me feels guilty about not reading as widely as I used to, but with the wealth of material out there now coupled with a dearth of time, I'm finding I juts get selfish and stick to what I know I'm likely to enjoy. Back to Igort's 5, it was published by D&Q (and subsequently Jonathan Cape) in 2004, so 10 years ago now, and I'm so excited to read it because the visuals and layout seem to be doing all sorts of crazy good shit- especially the way he goes from clean and controlled lines to this murkier, more textured style.

Oliver gave me the Book 5 of Anderson PSI Division as a leaving present- it's written by Alan Grant and illustrated in black and white by the incomparable Arthur Ranson. Haven't investigated what it includes yet, but that cover's not boring, is it? And as we got the new comics delivery yesterday, a book I've been waiting for: Judge Anderson: PSI Files volume 4- again, the bulk of which is Grant-penned, Ranson-drawn stuff. I've read a number of the 2000AD collected books over the years: Stone Island, Cradle Grave, Stickleback, Mazeworld, but my entry into the Judge Dredd-verse has come through following Ranson specifically, and via Anderson. I guess I find it odd because on paper, at least, Dredd as the authoritarian, hard-line law enforcer is the character I'd expect to gravitate more towards, but Anderson is the more believable, more fully realised and empathetic. On a mission to get everything Ranson drew, if possible. 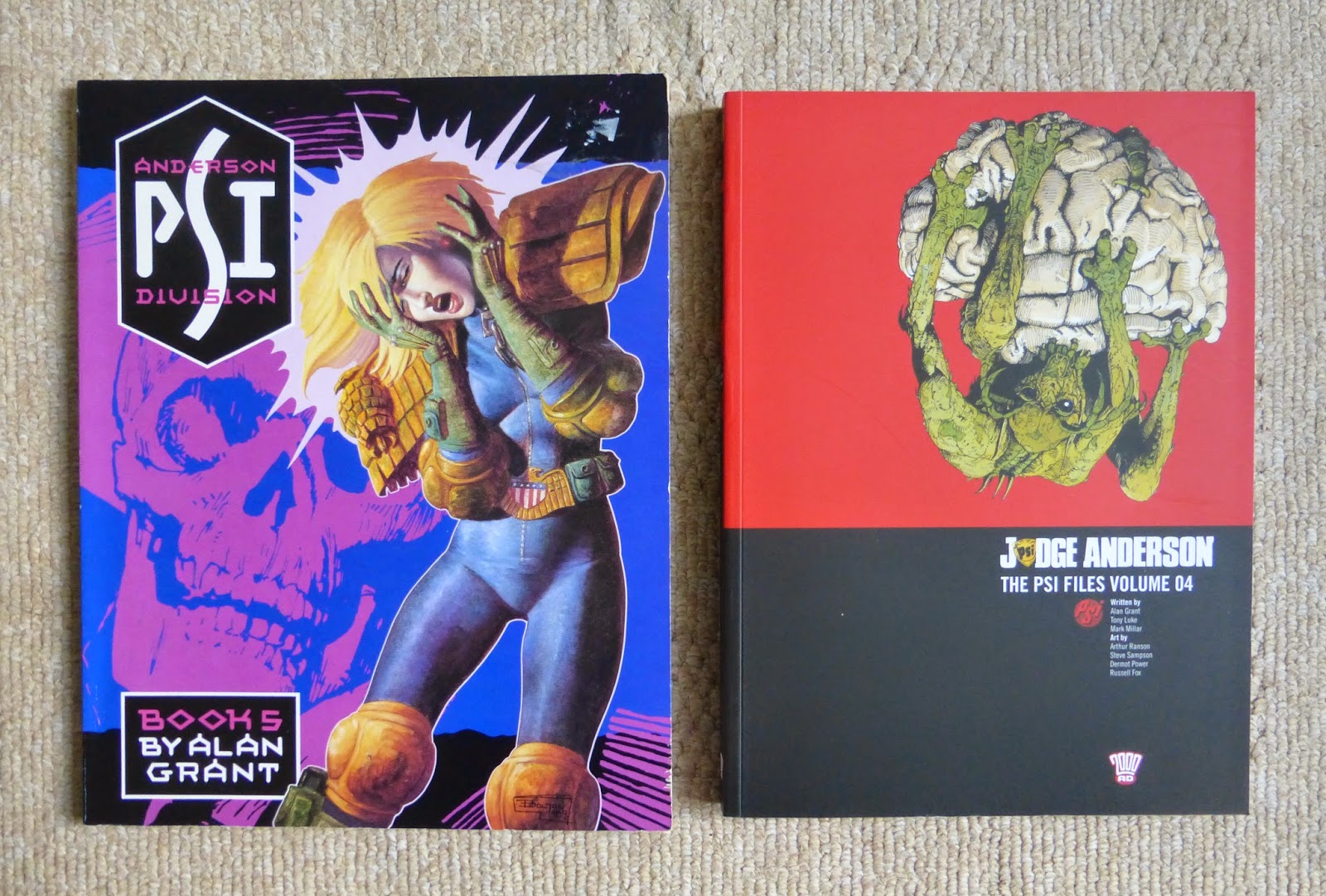 Look at some of these Ranson pages: 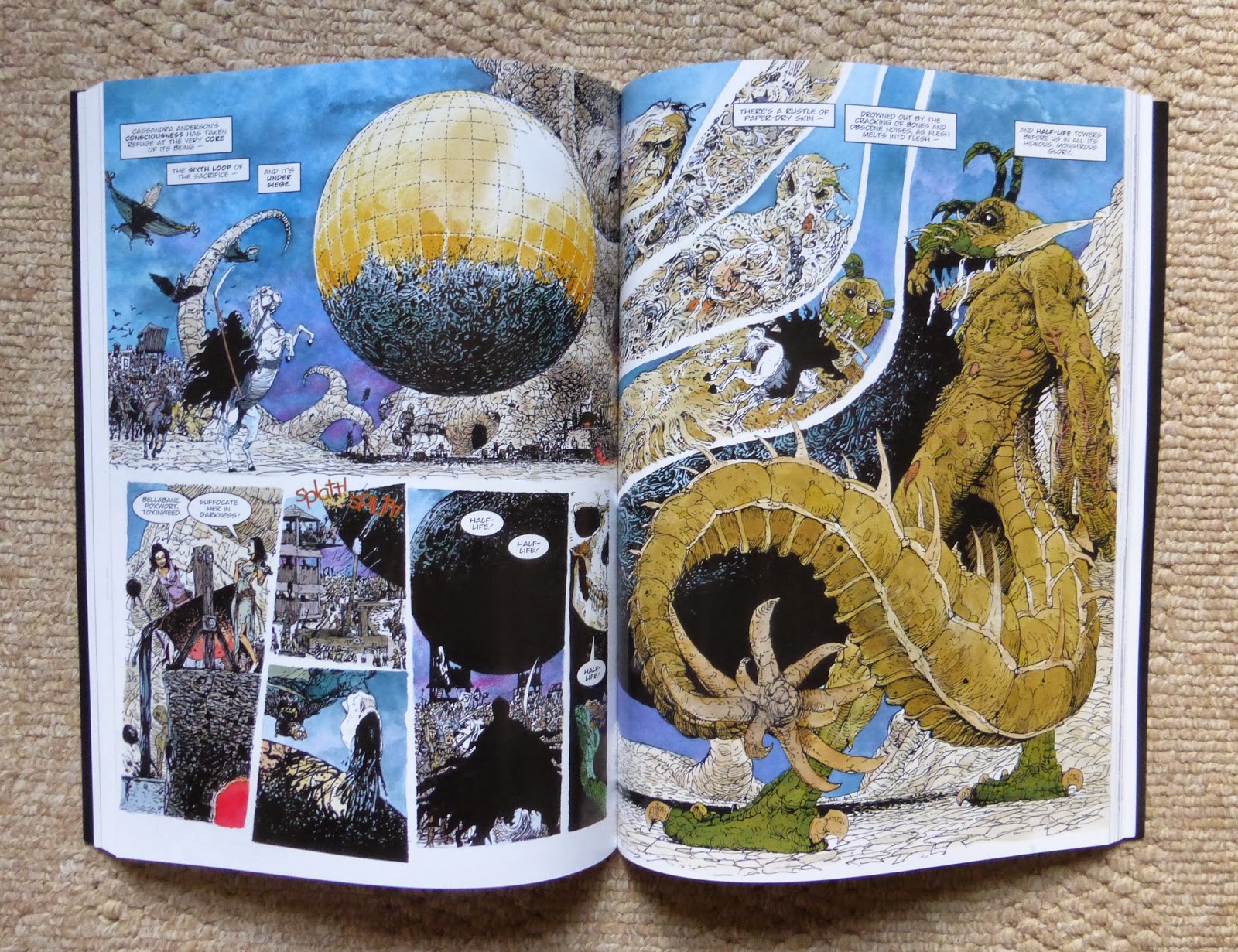 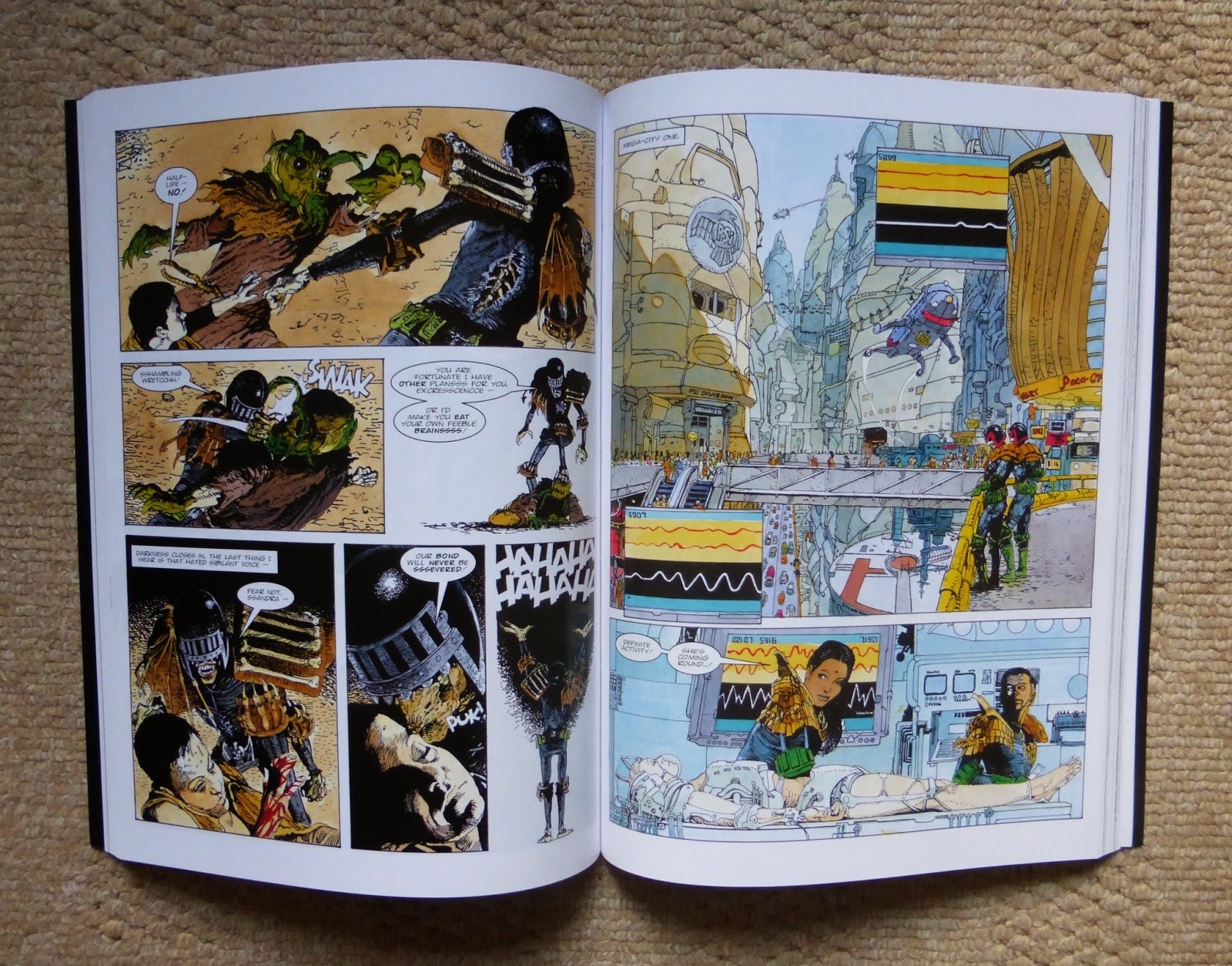 She-Hulk by Charles Soule, Javier Pulido, Muntsa Vincente: I read this when the first issue came out and it was good (somebody next to me muttered that Charles Soule was writing so many books, that the odds were one was going to hit pay-dirt, cough, cough)- not even super-heroey at that point, more girl about town with edges (obviously), but then Ronald Wimberly went and drew issue 5, so I've gone back and picked up the rest of them. Those covers by Kevin Wada do it for me, too- his attention to fashion and character detail is minute and it shows in his work- stupidly good. You can find his Tumblr here. 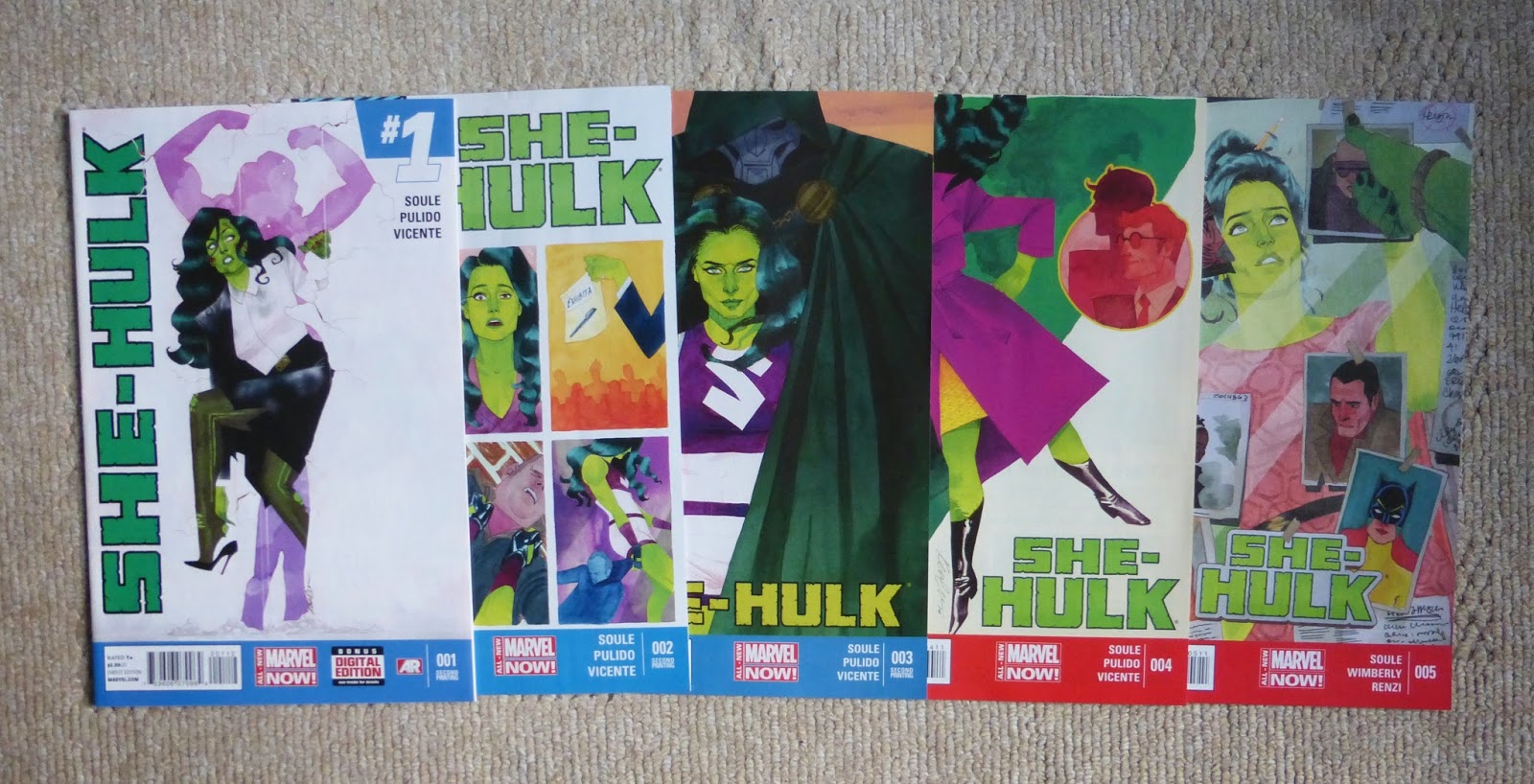