Around the room in comics in 60(ish) seconds

In case you thought this was a serious comics blog, I don't really have much to write today, apart from review and lengthier pieces that need finishing, so instead of piling on review after review, I thought I'd just go around my room and take pictures of some comic-related things that I have hanging about that I'm fond of (I'm fond of most of the things I have otherwise I wouldn't have them, but these I perhaps like more). Fail-proof riveting post, right? Anyway, the pictures shockingly turned out okay for me- as you know I can't photograph for toffee, so here's some stuff:

Forager print by Evah Fan, and Tyrannosaurus Bats by Dustin Harbin. I love Evah's work, it's so clean and simple,  charming and fun. Dustin's pretty amazing too- especially at dinosaurs which are my weakness- I wanna get more of his prints once I'm rich again. I'm totally shit at framing and hanging prints- I've got Drew Millward's awesome The Fly poster, Zac Gorman's Do What makes You Happy, a Dilraj Mann, and all sorts of others still in tubes. These are smaller, A4-sizish, and protected in wrapping, so they get to go on top of the short bookshelf. 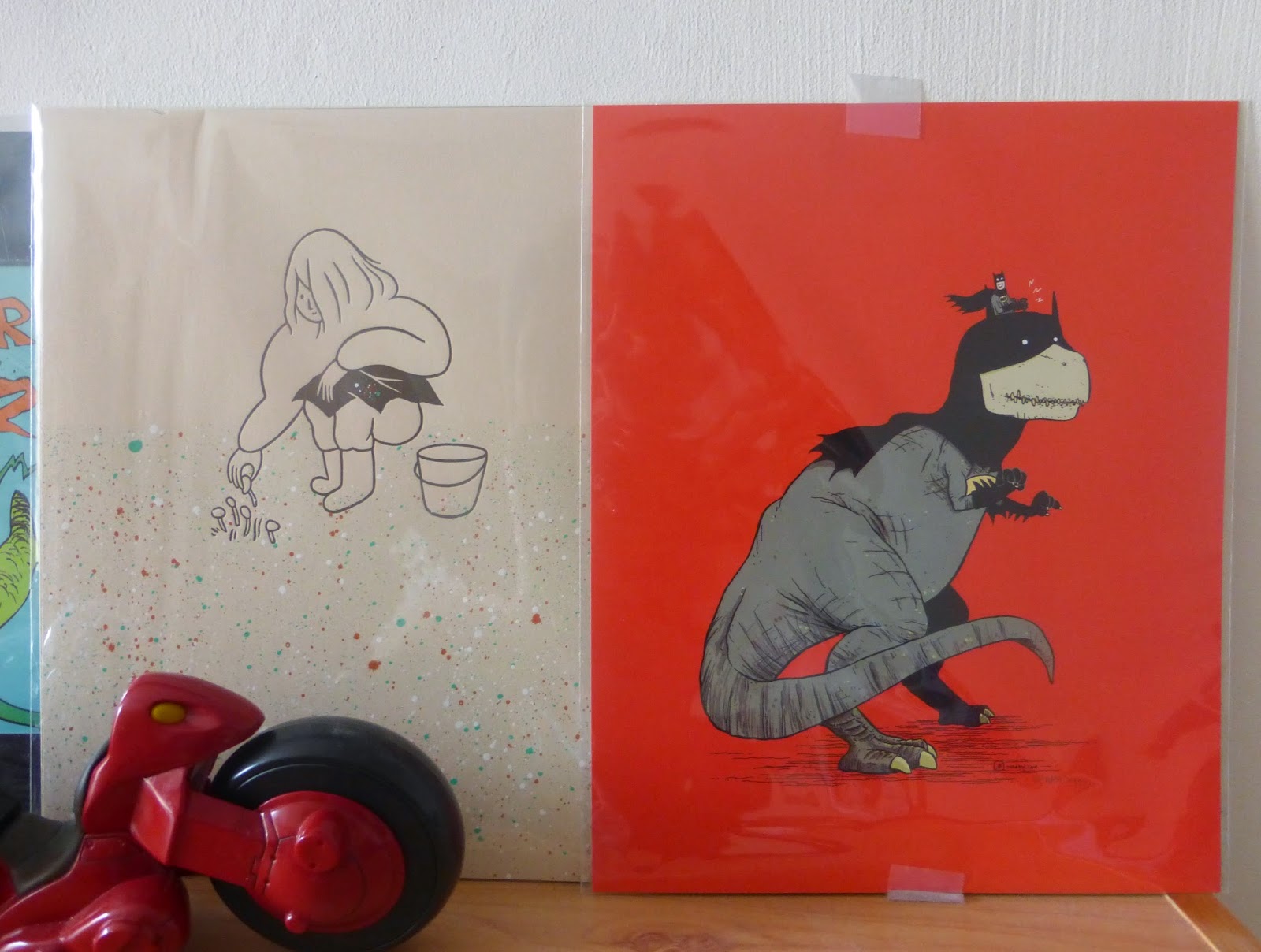 Koma by Pierre Wazem and Frederik Peeters is one of my all-time favourite books. It is just so many things, and I love the relationship between Adidas and her father, both of who are such amazingly warm and funny characters in their own way. And Frederik Peeters draws the heck out of it. I wrote a review of it a long while back, which would probably be quite a bit different now, but worth perusing if you want to know more about the book. The English language release from Humanoids has a fantastic cover, too which I could look at again and again: the colours are great: that turquoise/teal, the bold red lettering, the little girl and the beast gazing at their reflections in pink water. It's a nice reassuring weight and thickness, too. 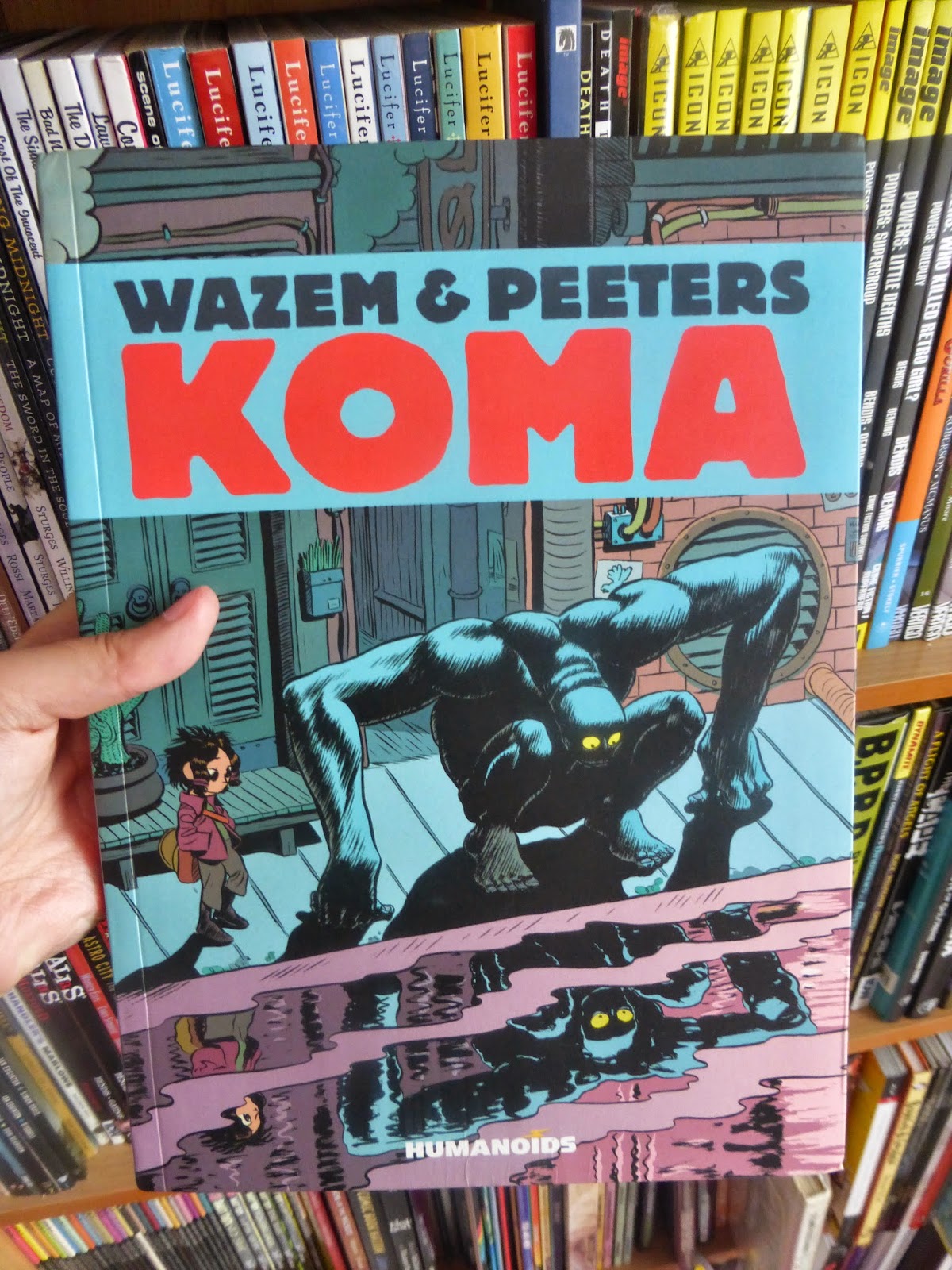 Last year's Thought Bubble pass stuck on a glob of blu-tack on the wall. If you think about in a scrunch sorta way, there's only August and September and then it'll be Thought Bubble in November. That is the best news. 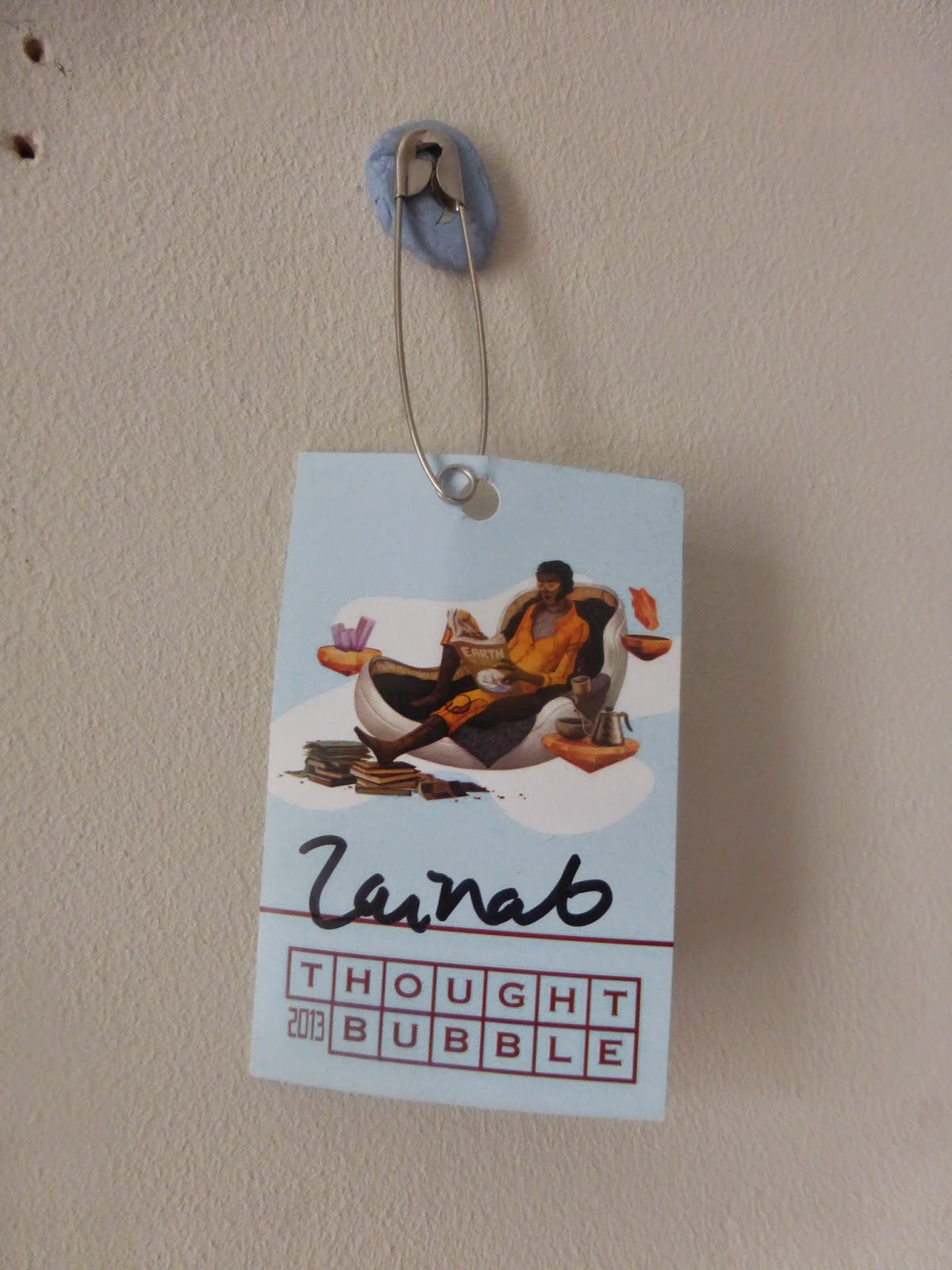 My Batman ring, made by, and bought from, the ace Lynn Allingham at Thought Bubble a few years back. You can find her jewellery shop online here. This is a super dangerous ring- sometimes to me, too. 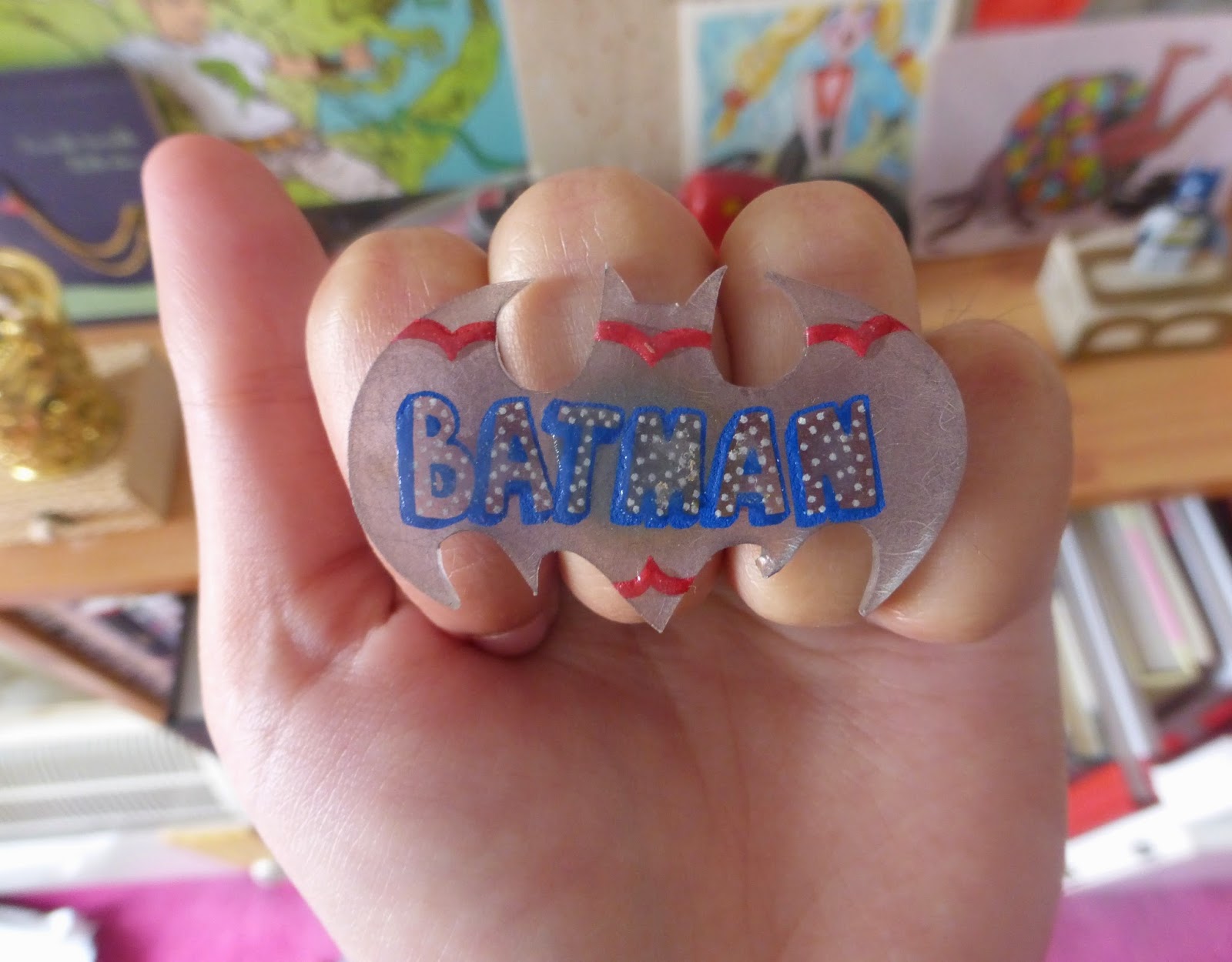 You know how mums and dads are aware you like something but don't quite grasp how? This, um, hear-shaped mini Batman-knock-ff notebook was something my dad bought back from Yemen? Pakistan? and proudly gifted me. Obviously, I love it in all it's kitsch, Bruce Lee yellow tracksuit homage glory- although I'd say it sort of defeats the 'I am the night' thing somewhat. 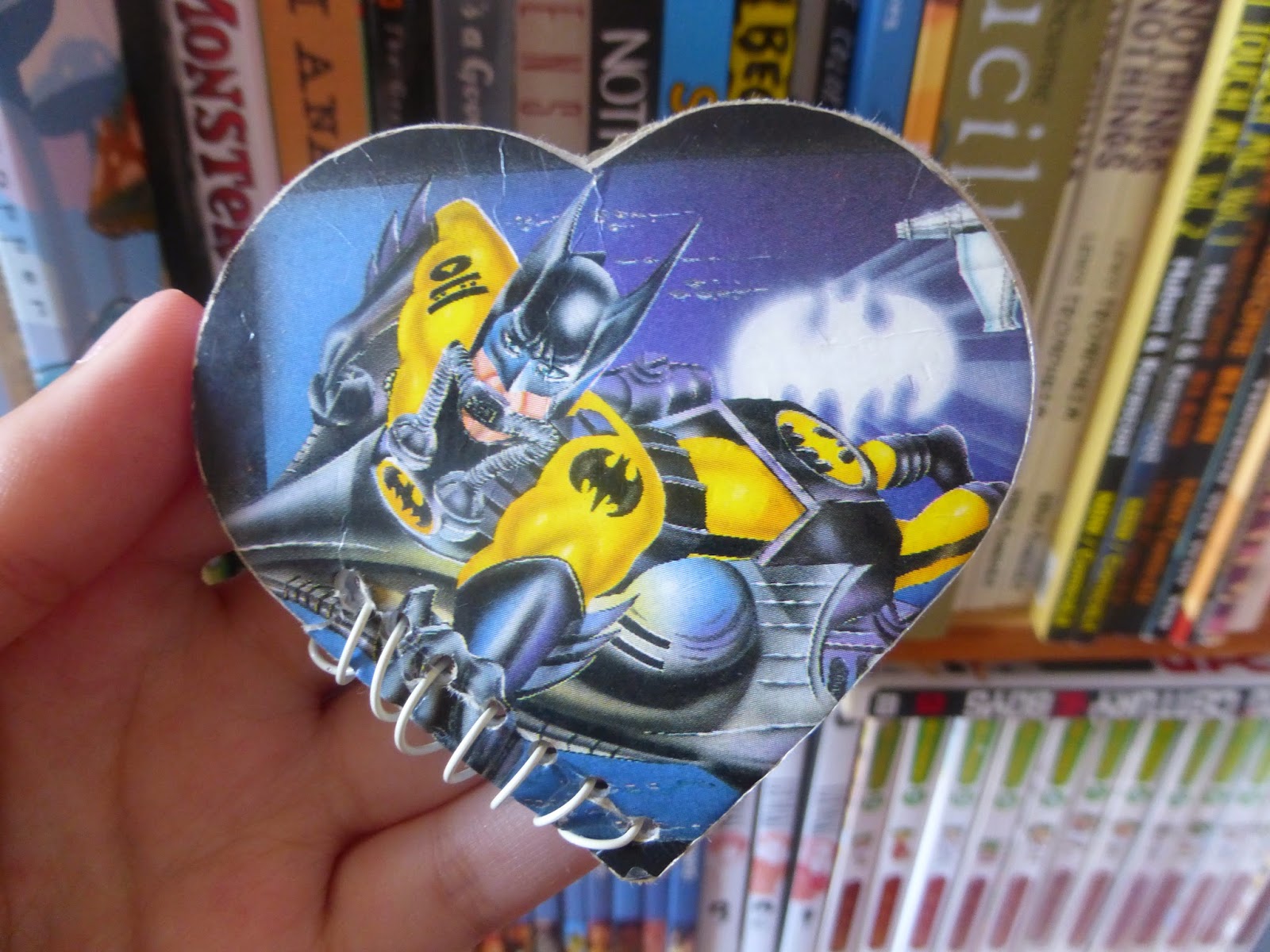 The best postcard by Corinne Mucha: 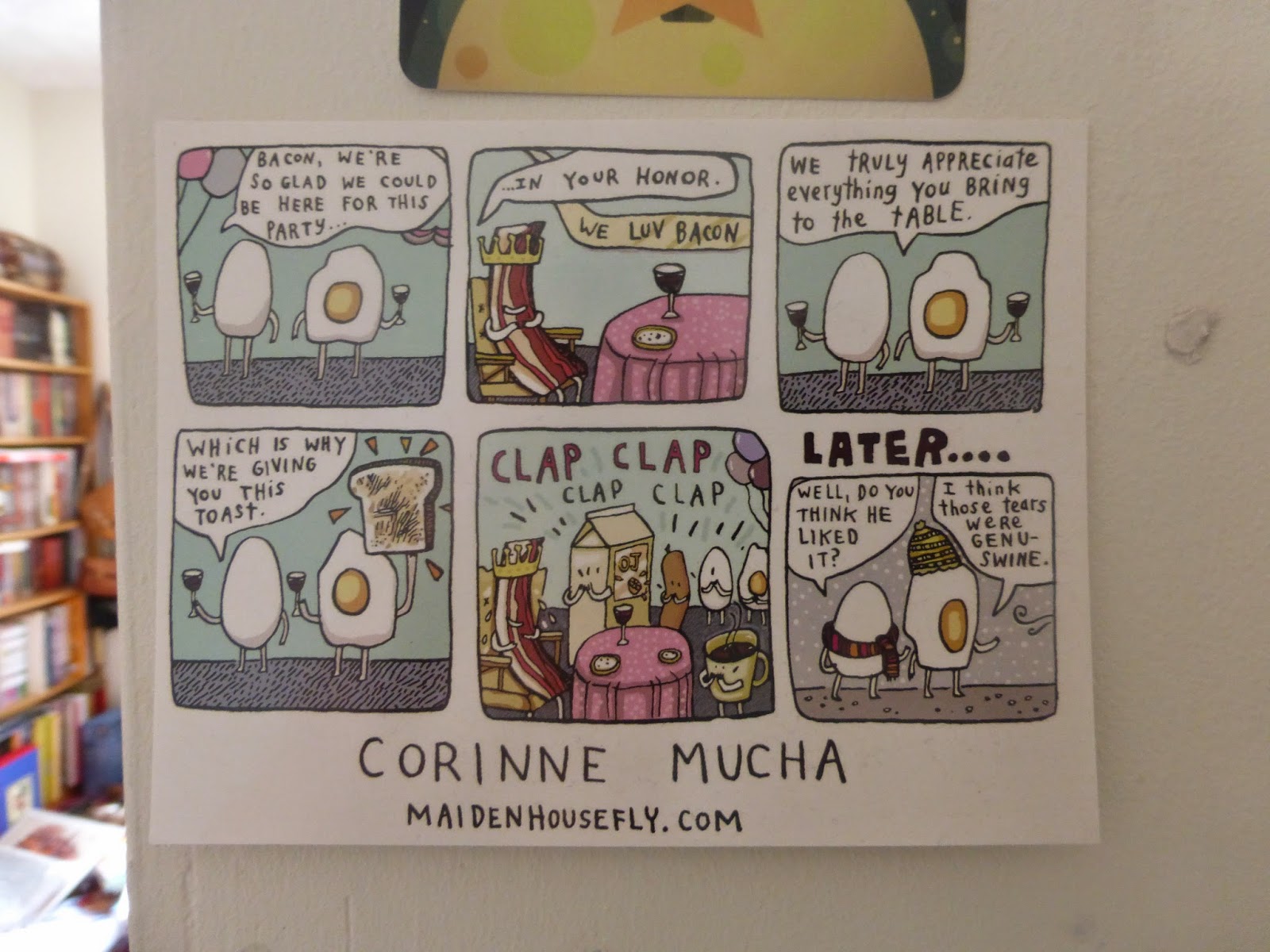 It got really sunny here for a bit, but this is a Raphael Lego mini-figure on my bag. It was tough choosing just one Turtle key-ring, but we felt Raphael probably represented my fiery temperament best. Angry alla the time. 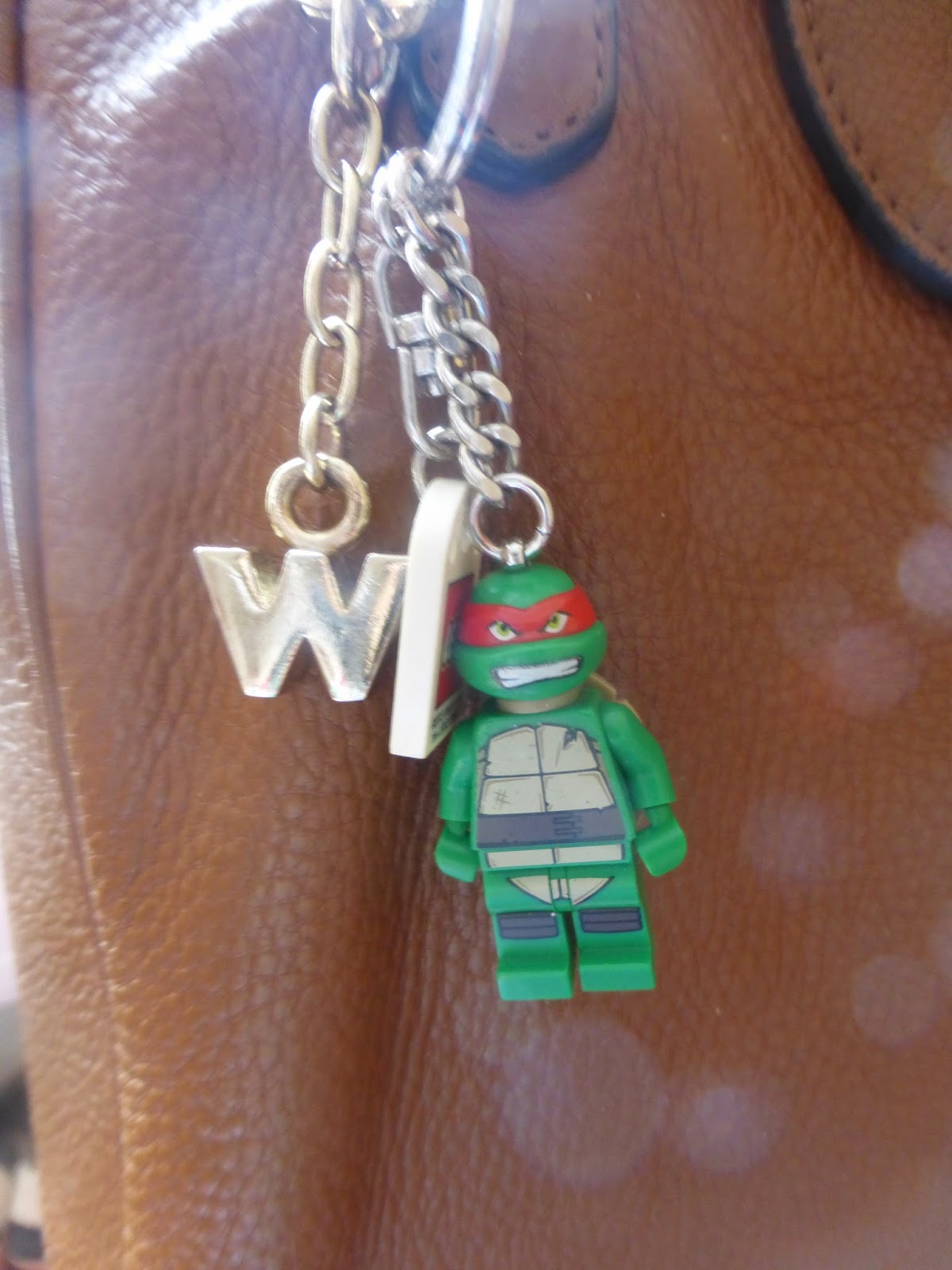 This was one of those happy mistakes- I ordered this but had no idea it was going to be in this Ladybird digest-hardback format. the art's a teeny bit squashed, but it really works. I did try finding out if more were done, but came up empty. I think the Batman Adventures are some of the best Batman comics made- a perfect synchronisation of art, tone, writing, content- everything, so to have it in this cute weird little package is pretty sweet. 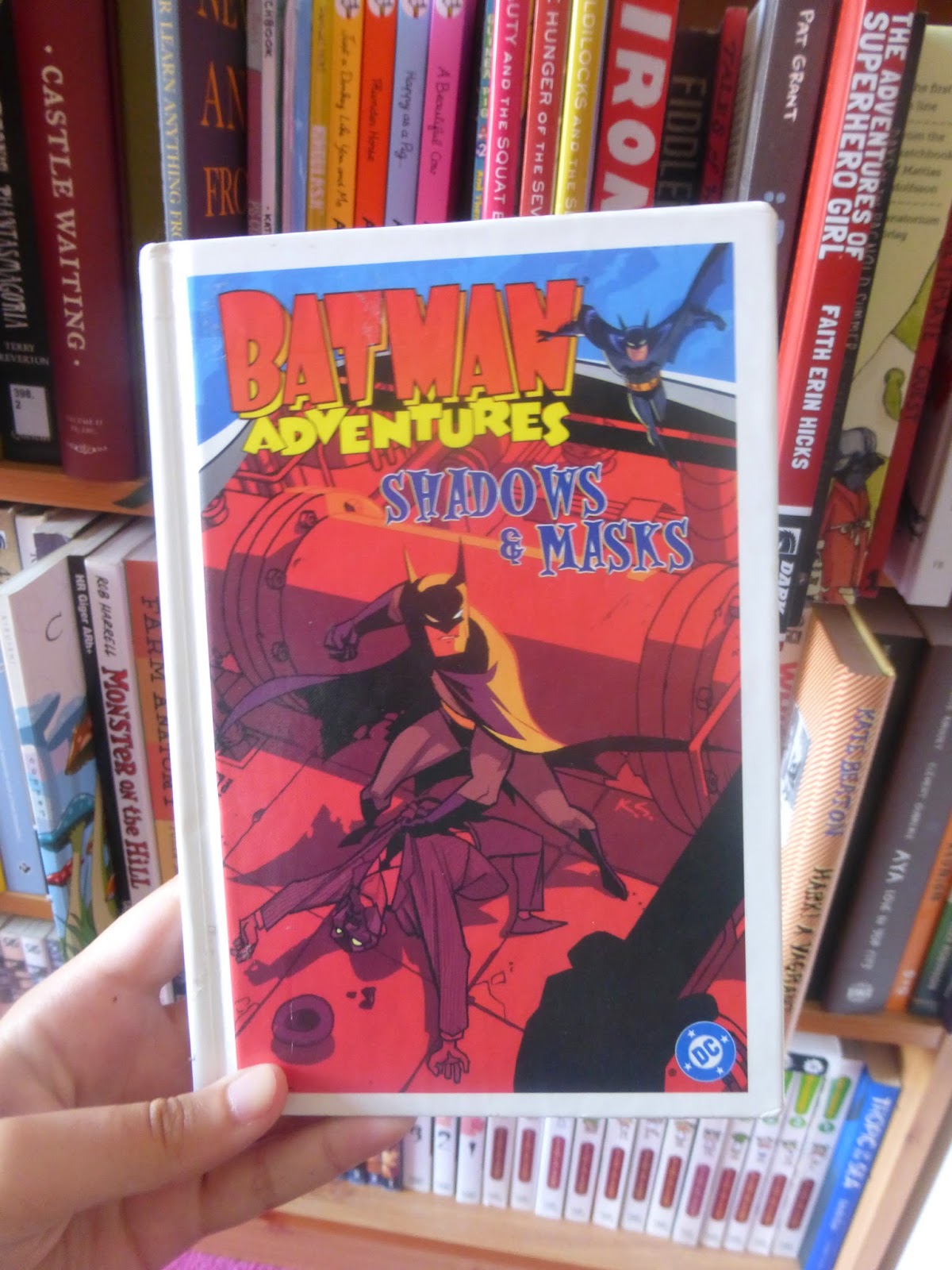 Is it terrible that I'm yet to read this? I actually only got around to buying it last week. I like because it has 2 simple design features: the rounded corners and the elasticated band, that make it so much more attractive a product to have, it just makes the book a bit more special, something you'd treasure. I really don't get why more publishers won't incorporate little facets like this to their books. It's gorgeous on the inside too- man, I wasn't expecting the colours- I'd only seen some black and white pages prior to this. 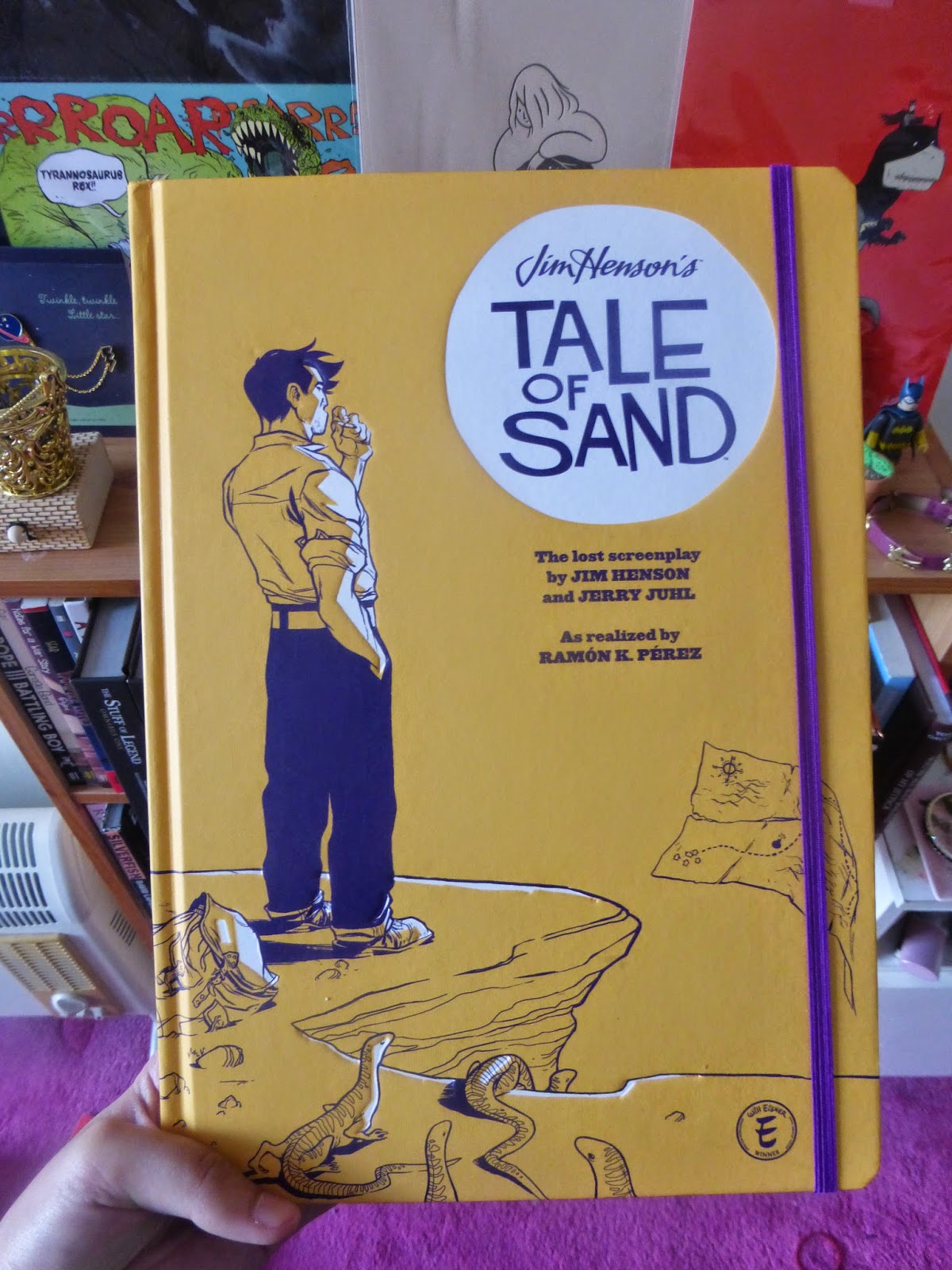 This is my complete collection of Yosuba! These books are my happy place, I'm a little sad I'm all caught up, but looking forward to the new volume. I used to stock up and buy a couple of volumes at a time, and whenever I was feeling a bit rubbish, I'd read one- they'd invariably make me feel better.I like the spine design: the 'Yotsuba!' encased in a green exclamation mark bubble, with the volume number serving as the dot, followed by a figure of Yotsuba doing something Yostuba-like. I particularly like volume 4, where she has her back turned to the reader. That's the first book of 20th Century Boys on the top- jury's out on that one- there's a lot going on it- switching between a number of people, and times. 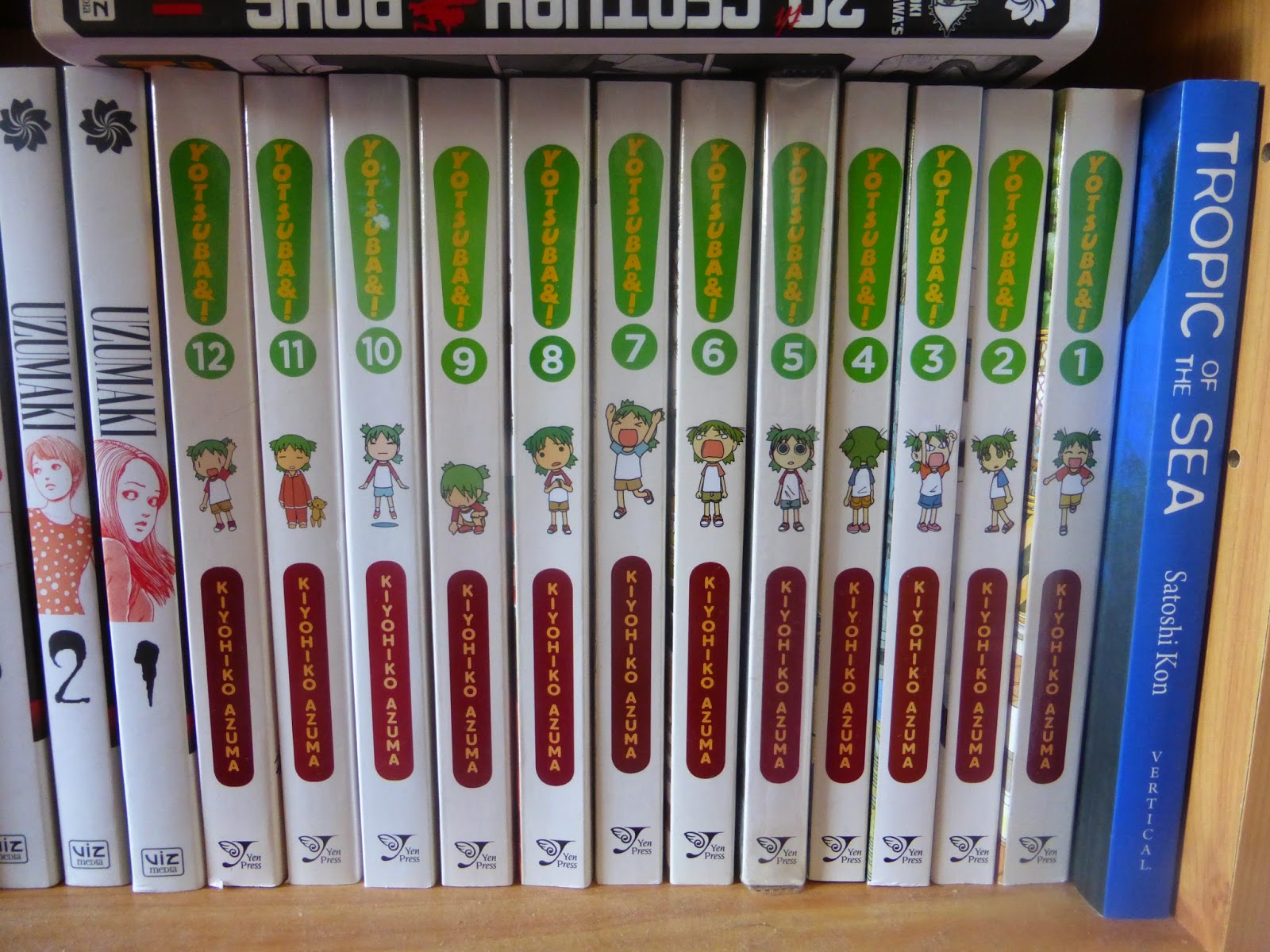 Another gorgeous print I have laying around, which was a present from Oliver, by German cartoonist Sebastian Stamm. You might remember I wrote about his comic, Leschek's Flug, last October. I believe they're working on a English translation. Need to find some protective covering for this. Or, y'know, a frame. 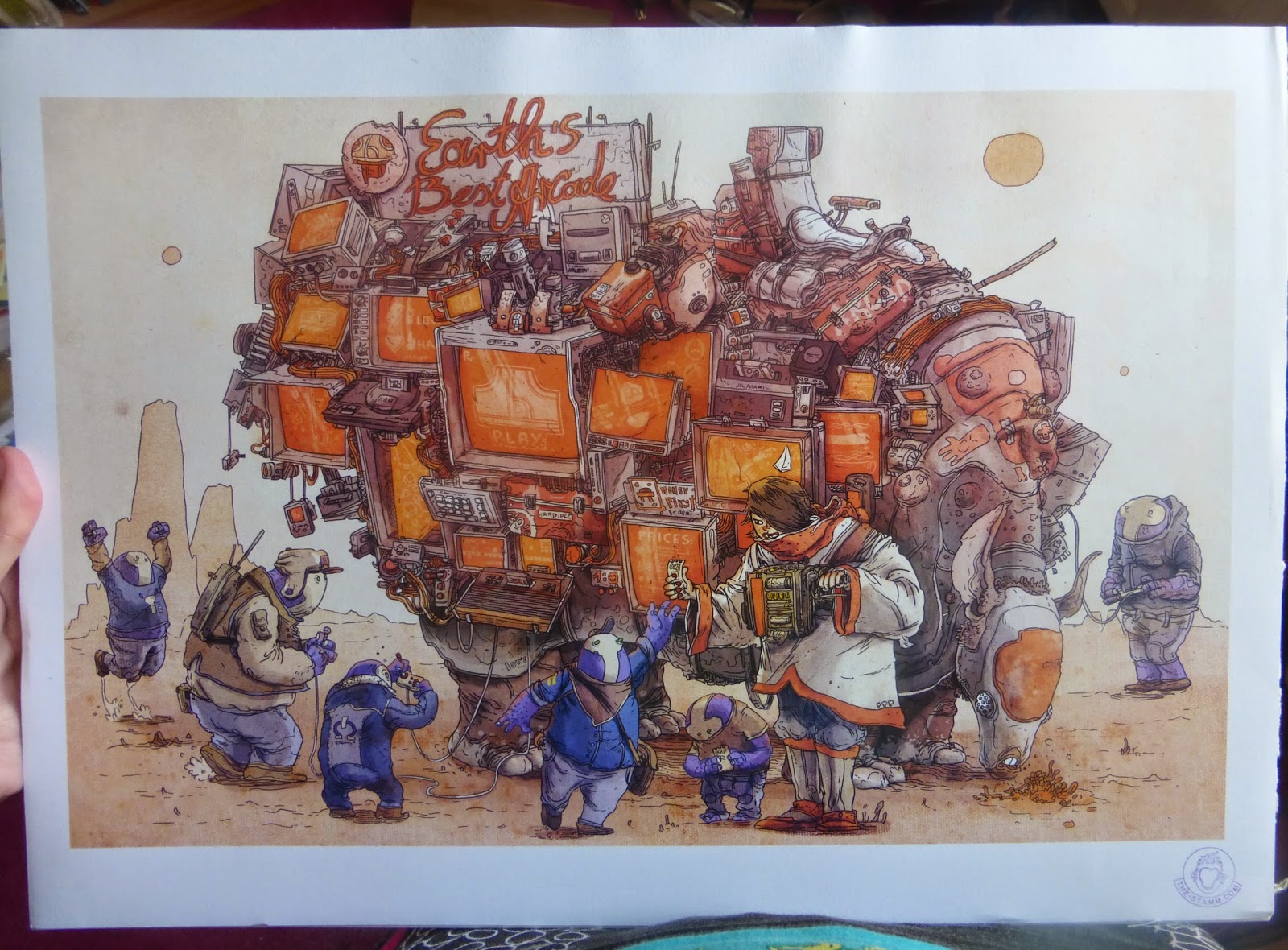 Ah, I was looking for this for the longest time: McFarlane's version of Kaneda's bike, released back in 2000. I'm not even a toy or figure person, but this thing is a beauty. This was from the first series, I believe- they also produced some of the character figures, but the Kaneda wouldn't sit on the bike, which they rectified in series 2 by producing a boxed Kaneda with bike. 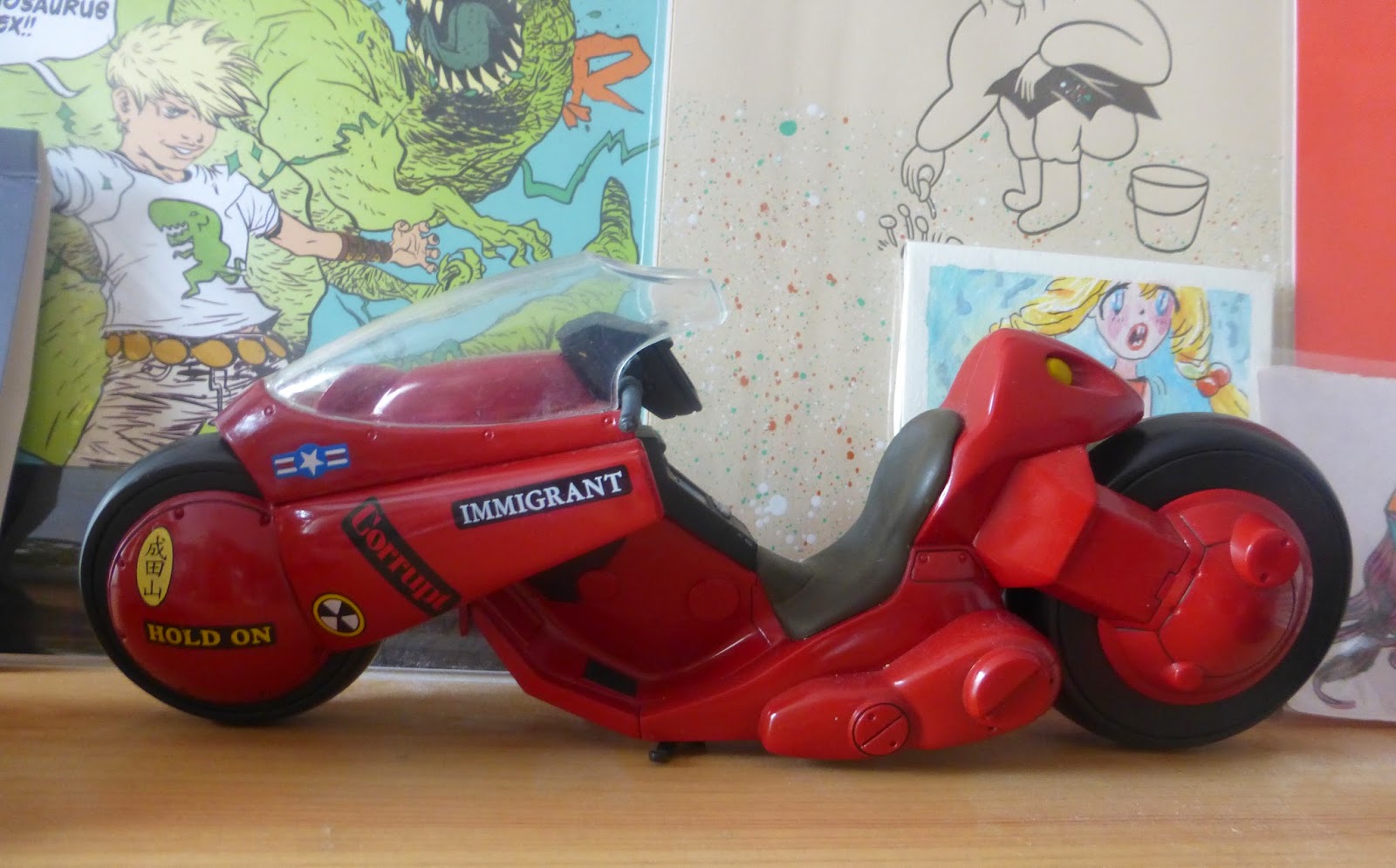 Three of my favourite, random one-shots: Batman/Spawn (that title's wrong, yo). One of the reasons I love this is it actually doubles a game: count how many times Frank Miller uses the word 'punk.' List how many sentences this contains that re longer than four or five words. Endless entertainment. Below that you have the Hellboy/Beasts of Burden one-shot which was all kinds of perfect, and then probably one that sank into obscurity, but I randomly decided to cherish: Buddy Cops by Nate Cosby and Evan Shaner. The definitive android partnered with a drunk, super-being buddy-cop comic: the Shaky Kane one had nothing on this. 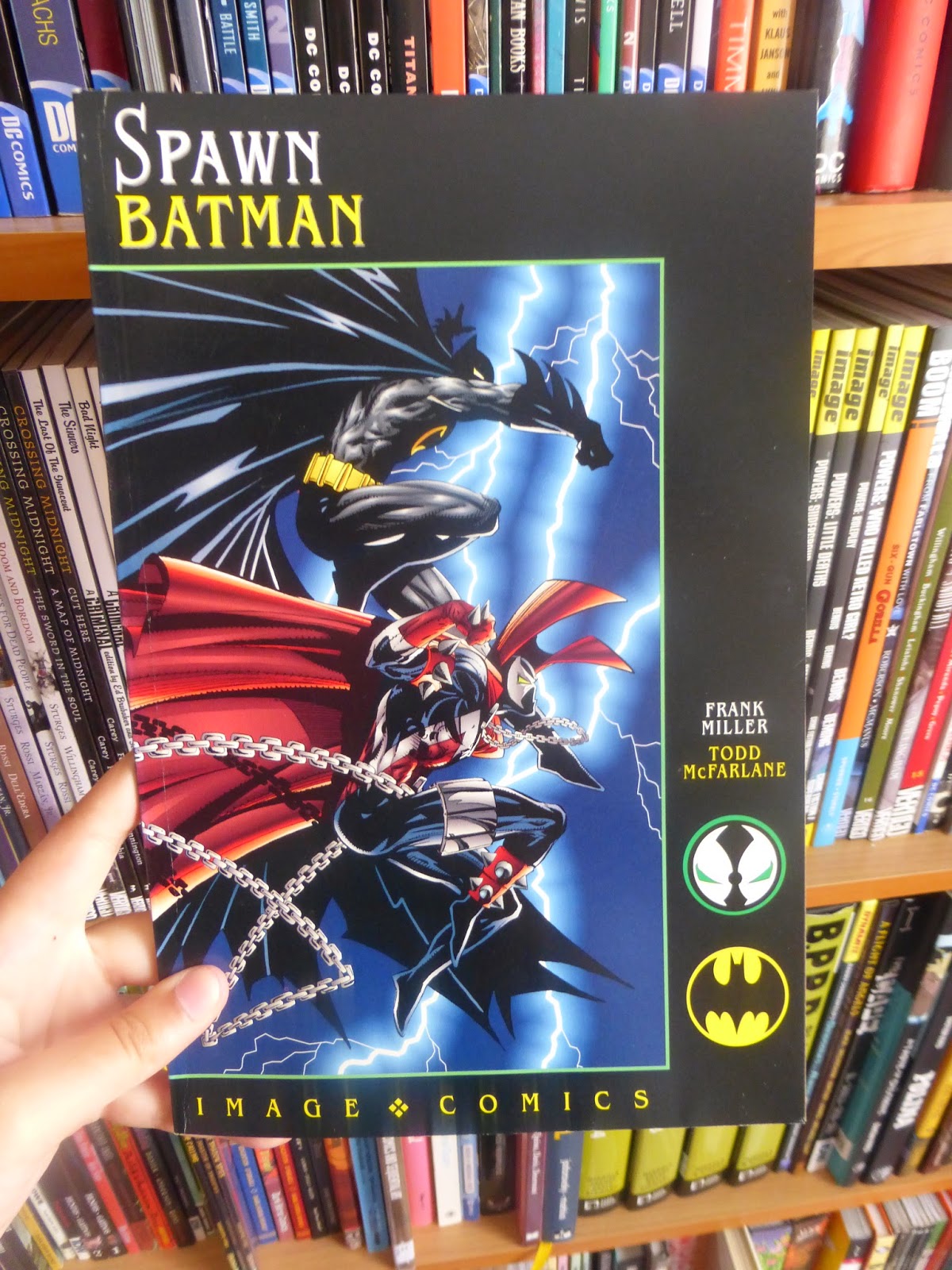 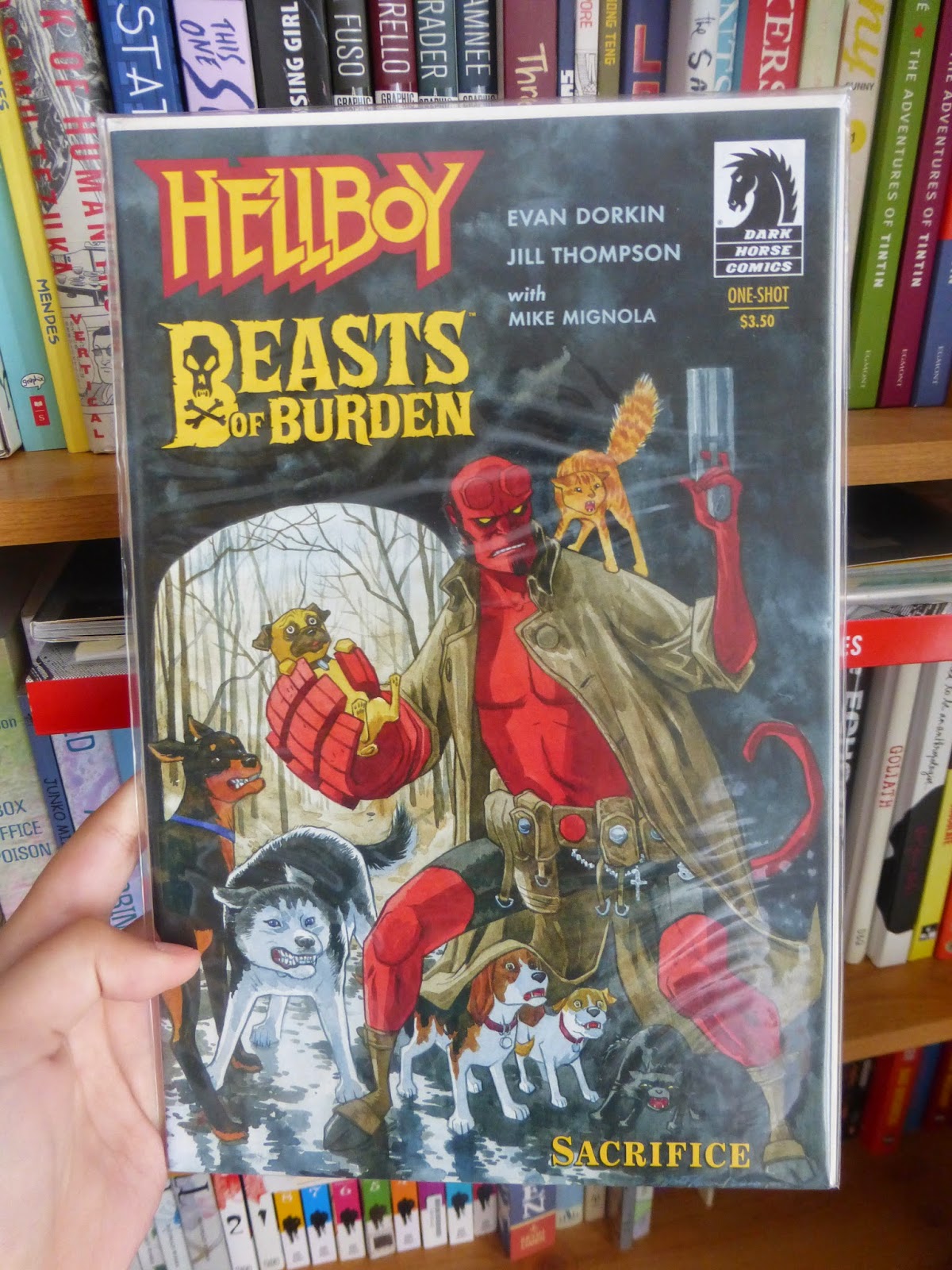 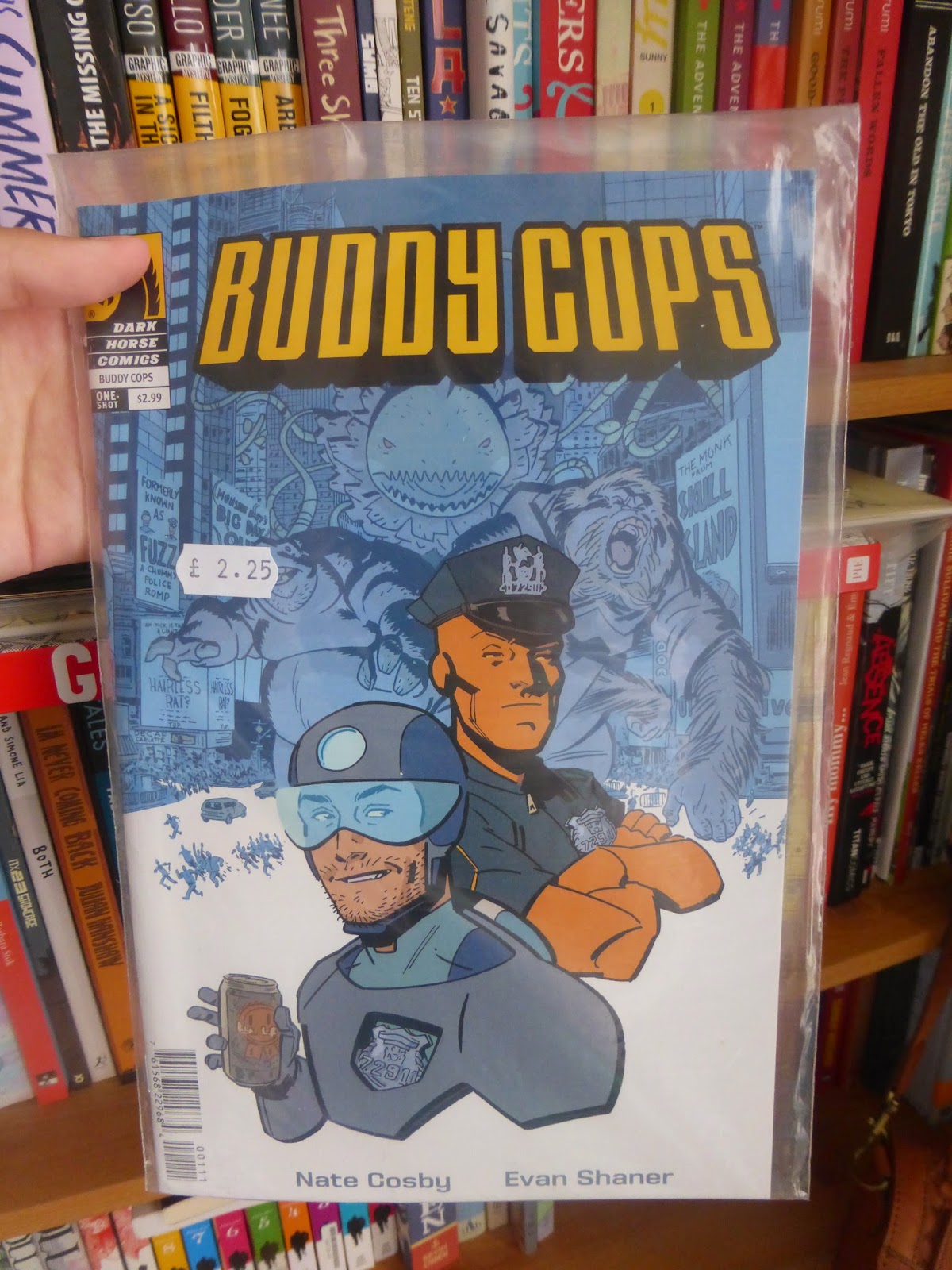