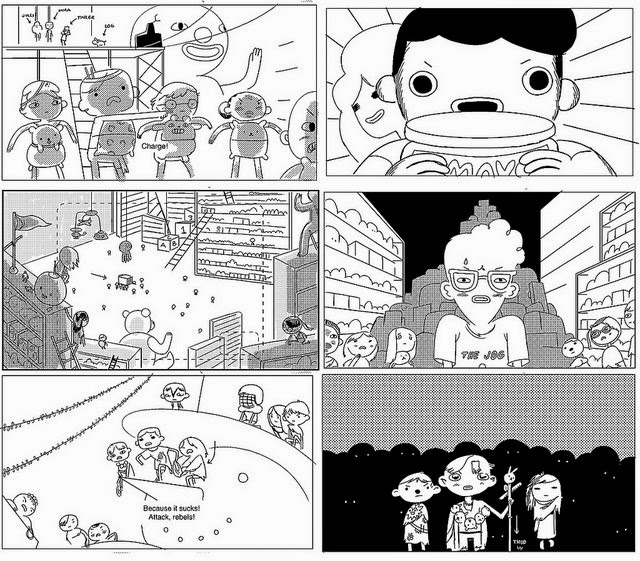 I don't write often here about texts outside the medium of comics, and less so about projects that haven't come to fruition for some reason or other, but I'm making an exception today, as this one involves one of the finest cartoonists currently working- Michael DeForge, and one of the most well-respected publishers and 'voices' in comics in Ryan Sands (of Youth in Decline). Over the past year, the two have been collaborating on the creation of a cartoon series, titled MallNation, that was being optioned for the Cartoon Network, with Sands and DeForge working on concepts, design and story together, and DeForge on all illustrative duties. Although the project got as far as finishing the storyboard, Cartoon Network decided not to green-light a pilot, which means Sands and DeForge are now allowed to discuss the project, and have shared a variety of character illustrations, storyboards, and more.

It's a show involving one of those weird situations which you kind of secretly hope happen to you: getting locked inside a shopping center or mall (as they're referred to in the US and Canada). It would be creepy, but it'd also be cool being the only person amongst all this stupefying range of things. Well, DeForge and Sands took the idea further- here's an overview of the general concept from DeForge:

'MallNation is about the entire student body of an elementary school getting locked inside of an abandoned shopping mall as punishment for scoring lowest on standardized testing in the country. All the cliques of the school branch off into their different storefronts – the goths take over the arcade, the popular mean girls build a tent city out of expensive textiles in the department store, etc. The show would be about the all the kids learning how to live together and get along with each other in this unsupervised, anarchic society. Episodes would feature the children squabbling over territory, exploring weird, uncharted parts of the mall, and working together to build something new and cool out of their situation.' 'The three main characters (above) are all siblings who, on a fluke, were locked in with the rest of the students on their first day of school. Jules is the “responsible” one, Mira is the “punk” one, Davey is a boy with an oversized t-shirt.' Sands writes that the have to 'band together to navigate roaming gangs of school cliques, escaped pet shop animals, and other strange surprises while building a cooperative kid nation within their new home.'

More characters: 'Ke Gong-Liu, the jock (A happy-go-lucky strongman... He’s a year older than Jules and speaks five languages, since he transfered from a weird Singaporean school system); Daniel Isherwood, the goth leader; baby Danzig; Sanjay Lash (tiny and energetic leader of the Mall Monitors, a group of self-appointed do-gooder kids who miss the authority of adults. He and the goth-emo gang that hangs out in the arcade clash often), the hall monitor/mall monitor; Beth, who runs the mean girls. Not pictured: Aiden Wildberry: overgrown 5th grader who tends the garden in the mall’s food court, which is fed by sunlight coming down through the broken mall atrium. He has a crush on Jules.' 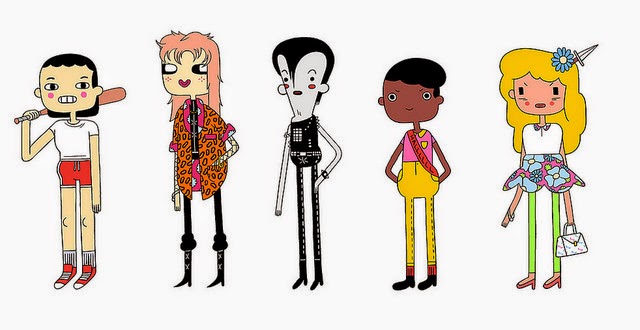 You can read more about Mall Nation on the Youth in Decline blog (run by Ryan Sands) and Michael DeForge's Wordpress blog, where you'll also find more design illustrations of the mall, it's levels, etc. I'm actually gutted this didn't get made; it looks and sounds amazing- and the concept presented with the illustrations seems so solid and well-realised- you can so easily see it as a cartoon, see the characters in your mind. I really hope  it gets to continue in some iteration.
Posted by Zainab at 15:03