Comics carousel: In need of a human touch 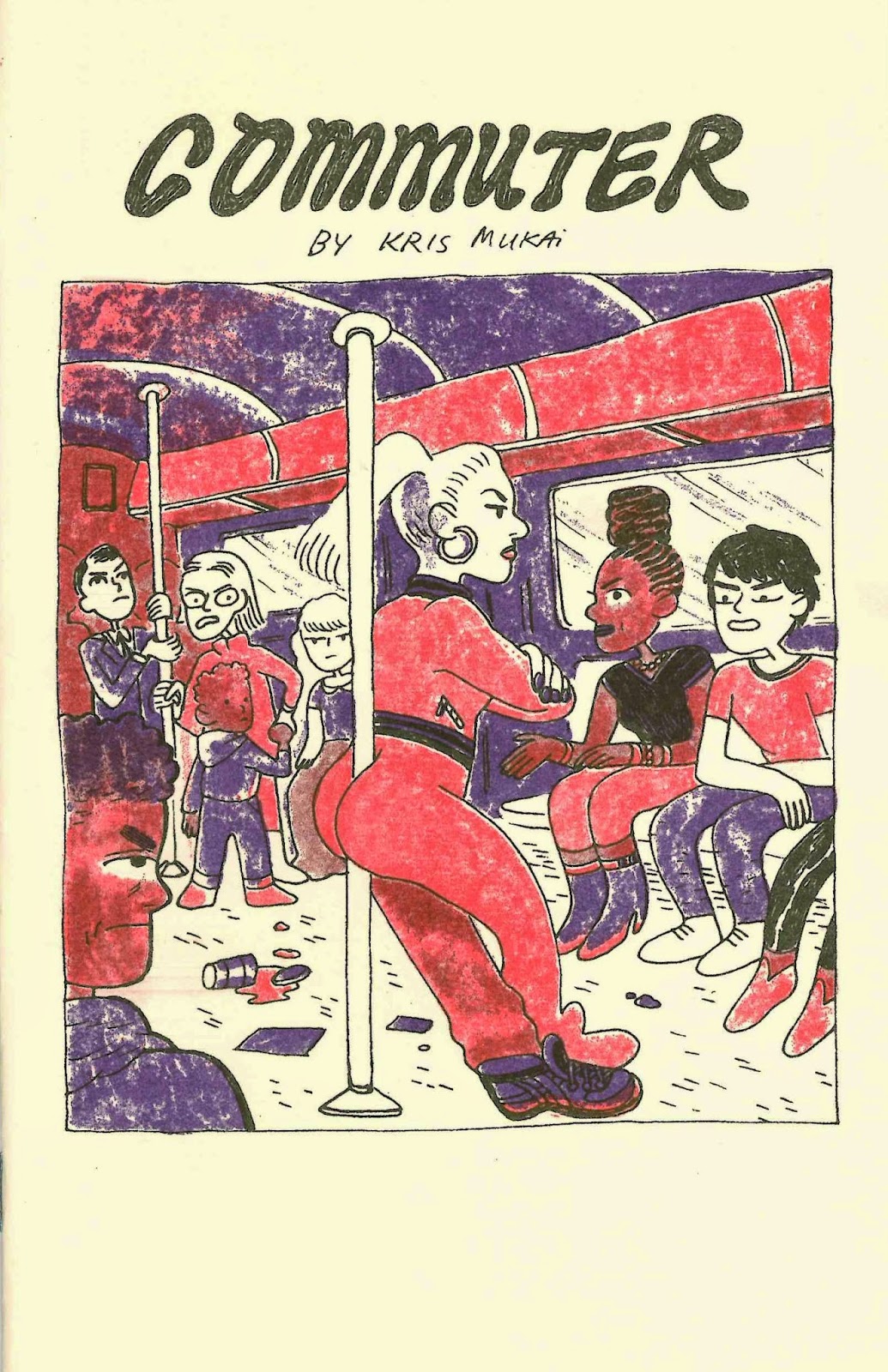 Commuter by Kris Mukai: I can't think of a comic that's been wholly set on a train or bus (Snowpiercer aside), but it seems like there should be one; public transport has an ineffable aptitude for capturing a wide-ranging prism of human experiences. Mukai's use of 6-panel strips is effectively paced in parallel to the journeys to and from work that are narrated here. From the mundane to back-away-weird, if you've travelled on bus or train regularly for any period of time, Commuter will resonate on some level- the food eating, the avoiding eye contact, the suspicious stains and substances, the fashion, the people watching: the regulars, the dodgy characters (there's a great silent strip where she just looks around, and each panel shows you something she's looking at: a film poster, college advertising, etc).

There's a unifying aspect to public transport- regardless of how efficient and clean a service is, or where in the world you may be: commuting is largely done by people going to study, or to work, and that ties in with purpose and meaning... the quiet time spent  in between which gives way to pondering on what you're doing and where it's leading... leaving tired in the morning, leaving tired in the evening.. overarching journeys and destinations- literal and figurative. The thing I love about Commuter is how Mukai gets to the quick of that, whilst entertainingly eyeing up other people's bags and clothes, and keeping an eye open to the dangers of late-night traveling alone- the manner in which she deftly manages to round up and sift though these various situations an indication of her capabilities.

The red/pink paper and colours combined with Mukai's drippy, melting style lend a tangible sense of the heat, odours, and clamminess (not to mention the stickiness of spilled foods and liquids, body fluids and god knows what else) that mark so many public transport vehicles, in addition to being strangely reminiscent of transport upholstery and weird plastic and metal grills and rails. Mukai's facial expressions and loosely rendered body posture are fantastic; helping to give nameless bystanders character, bolstered through clothing and style and accessories.. Commuter is funny, thoughtful and engaging- a book that's rattled through with pleasure and ease and then read again for fuller appreciation. 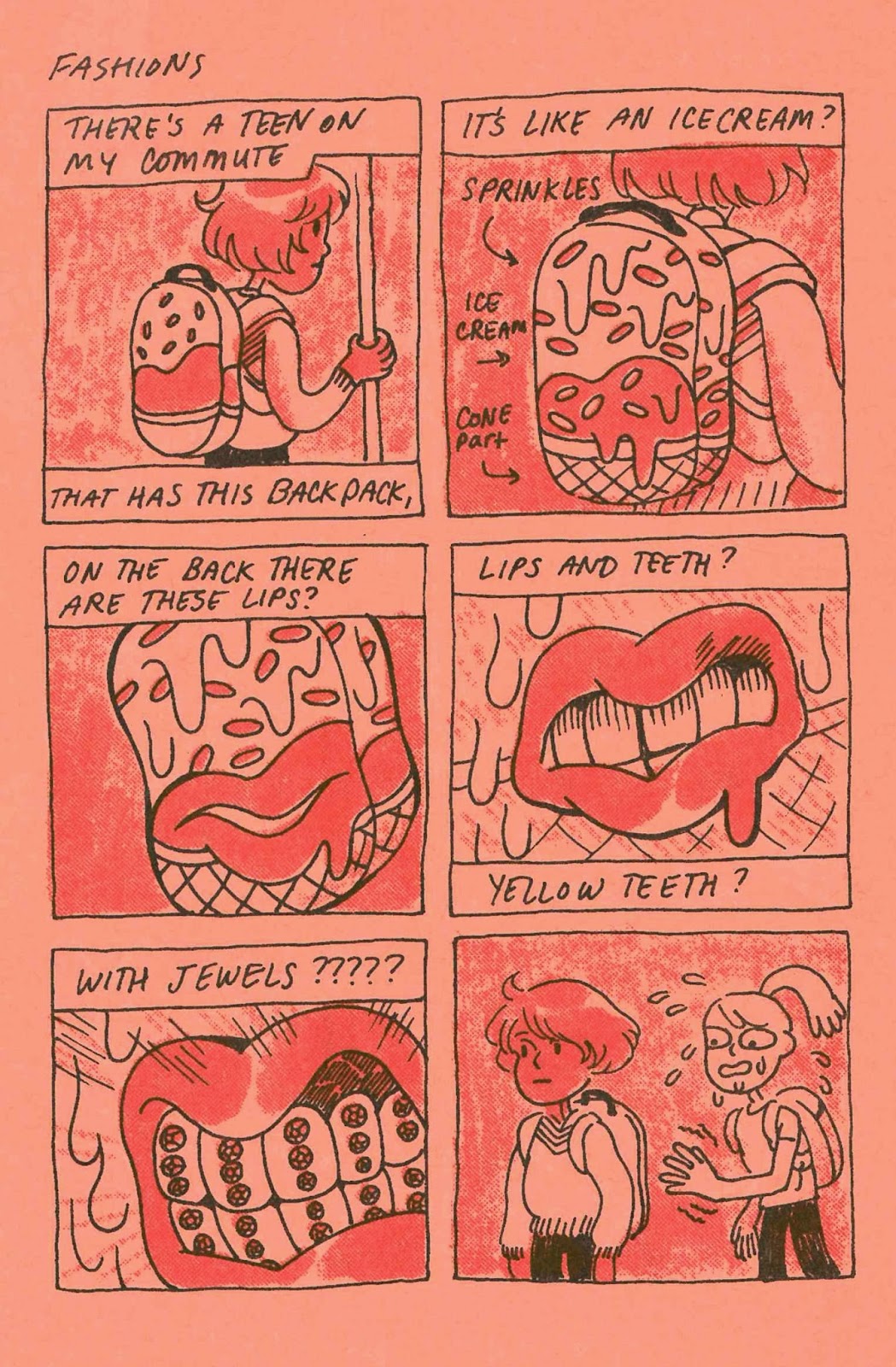 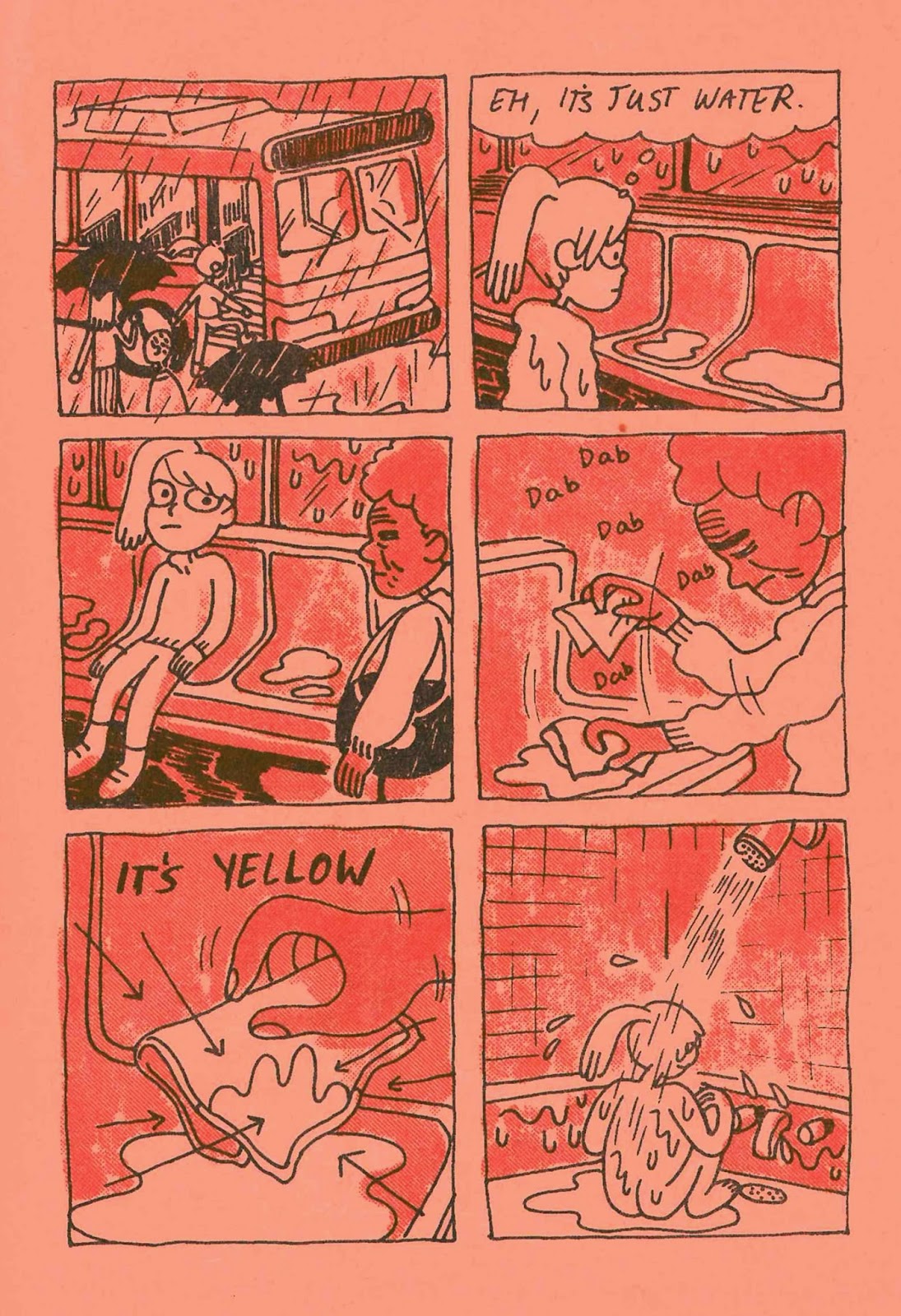 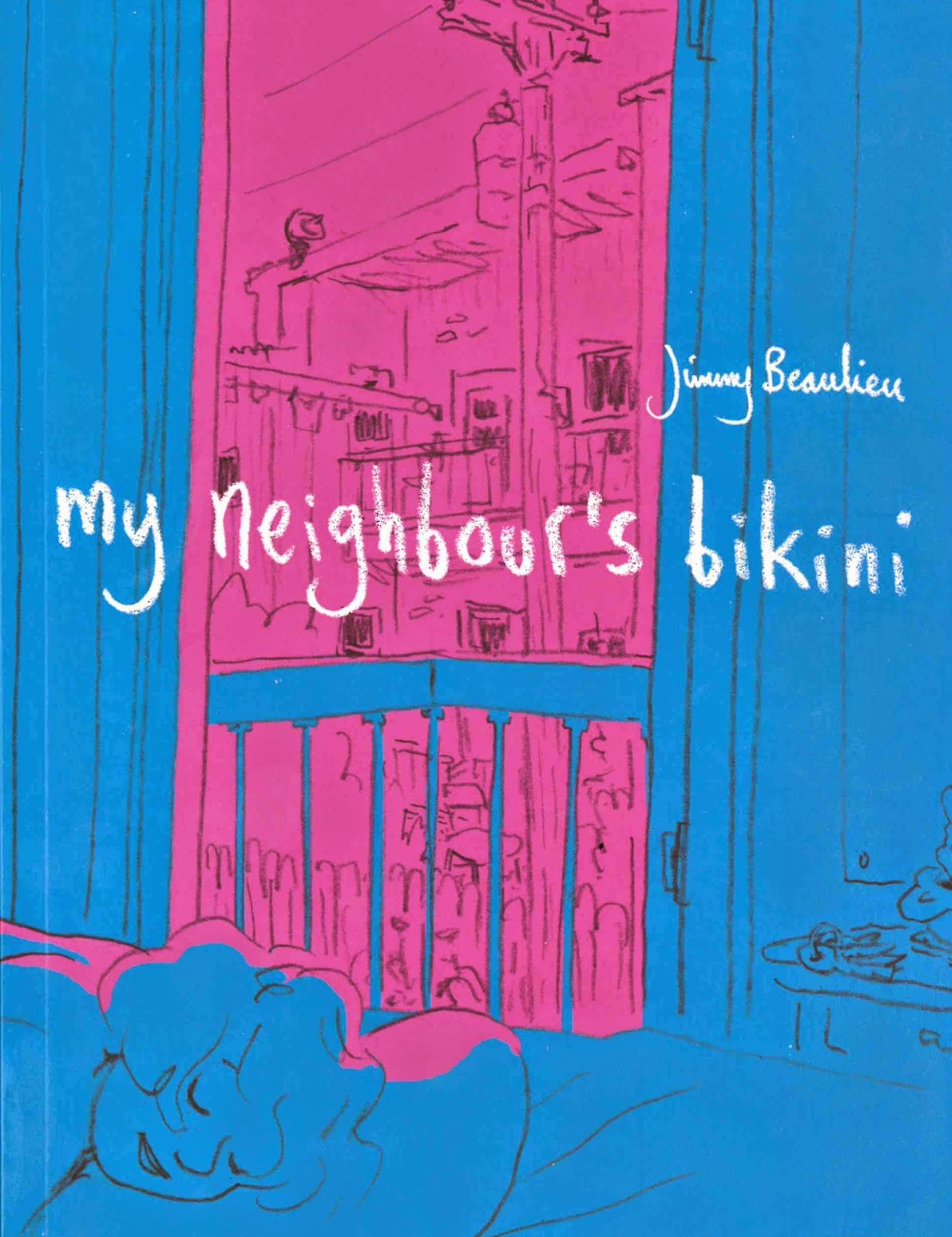 My Neighbour's Bikini by Jimmy Beaulieu, Conundrum Press: Joe Decie introduced me to the work of Canadian cartoonist and illustrator, Jimmy Beaulieu, and being pretty much instantly sold, I ordered his new book, My Neighbour's Bikini. Released in May with Conundum Press, it's only the second (I believe) of Beaulieu's books currently available in English, after 2006 autobiographical collection, Suddenly Something Happened.

There's no question over Beaulieu abilities as an artist- he has a lovely, light touch, but Bikini is an odd, slightly mis-judged book that leaves you feeling a bit uncomfortable. The main character is a man in his mid-twenties, who is forced out of the house due to a power-cut, where he seizes the opportunity to talk to his neighbour, Bernadette, for the first time, and who he's been admiring from afar for a while. You get the feeling that Beaulieu's aiming for charming/ bumbling with regards to his protagonist, and that this is supposed to depict a sweetly awkward first encounter, but it comes off as voyeuristic in places, especially because it's told from only Simon's point of view, which makes it incredibly male-gazey in parts. For example, there's a segue into another neighbour's house where a couple is having sex, an interlude which adds absolutely no dimensions to the narrative whatsoever. It's difficult not to interpret the lesbian sex scene as gratuitous when you take into account Simon's  less-than-faultless narration, coupled with the fact that they serve no other purpose whatsoever (apart from one of the ladies later suggesting they go to the pool, which results in a splash page of Bernadette in a bikini). The women here, Bernadette included, are the least fleshed out as people, and subject to Simon's idealisation -which is often largely sexual, and made all the more icky because he doesn't know a thing about her.

I'm sure people will read this -and Simon's character- in different ways. We all have expectations and do crappy little things like look at a person's music collection and feel inordinately pleased that they like the same things we do, as if that's going to be  a major, meaningful factor in how a relationship will pan out, but there's an undeniable 100  Days of Summer vibe here that sits uneasily. The worshipping and idealisation of women you do not know at all- shown literally when Simon has a dream in which he encounters a huge, naked, silent (dubious, dubious) goddess version of Bernadette, and asks her, 'Tell me this time is she the one?'


Bikini is not intended as a particularly deep book; done right it would have read very well as another summer concoction of a young couple meeting for the first time, but it's charm, though visible in places, gives way to a more prevalent and juvenile leery tone. Beaulieu can draw beautifully, alternating from looser to a more deliberately drafted style, and the auto-bio strips he includes as back-matter at the end of the book detailing how the book came into conception are really good, but on the whole it's an unevenly presented book that fundamentally misses its mark. 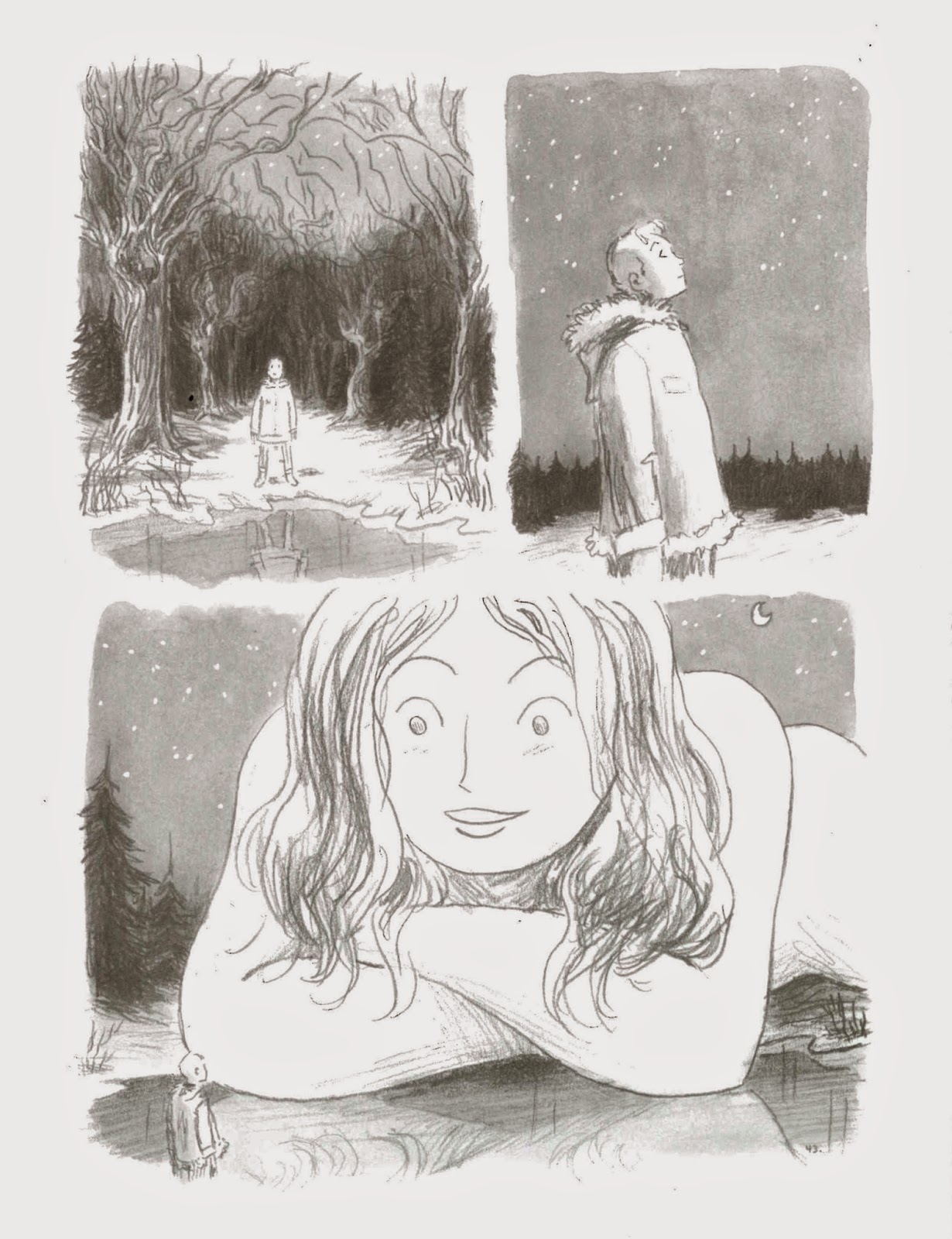 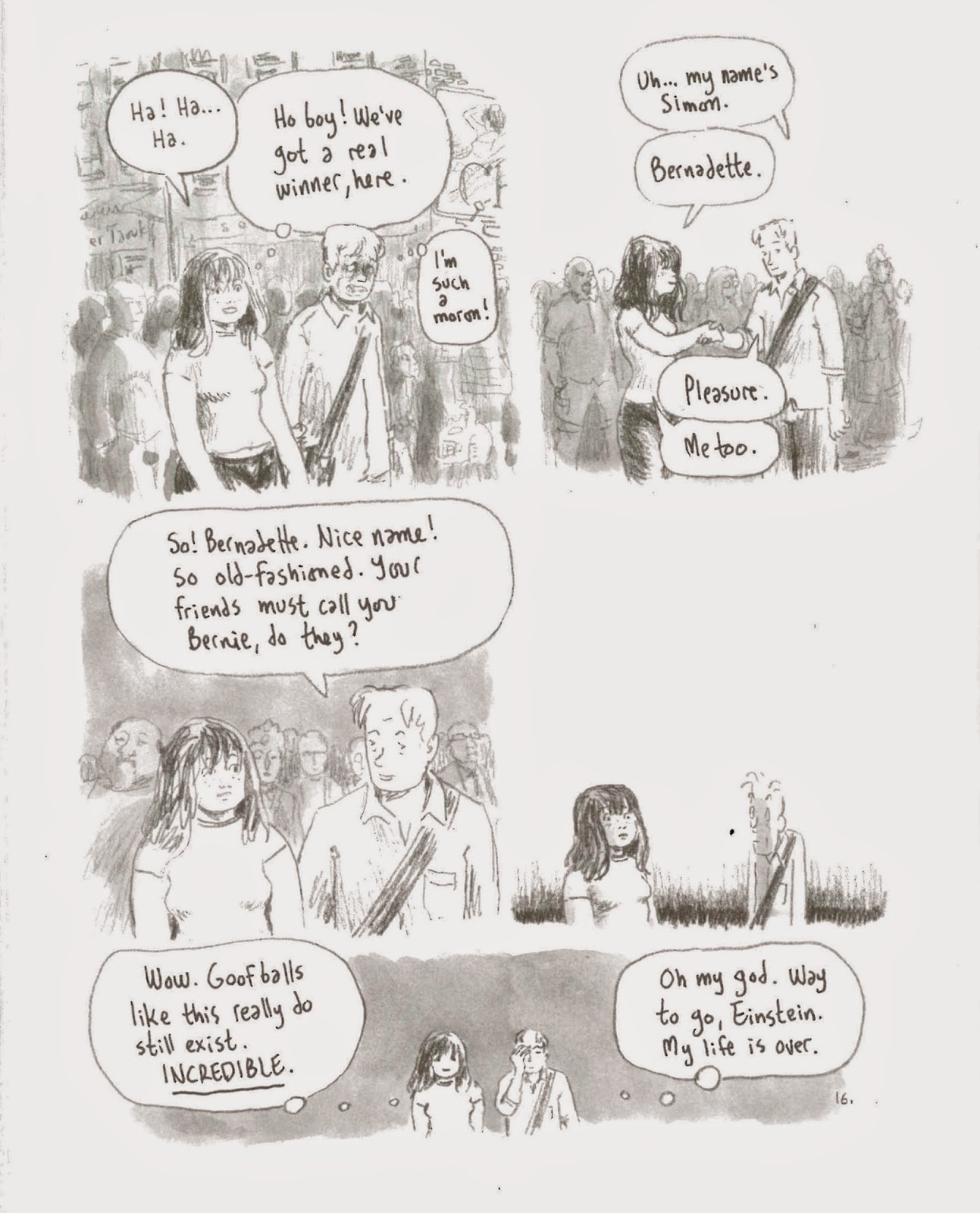 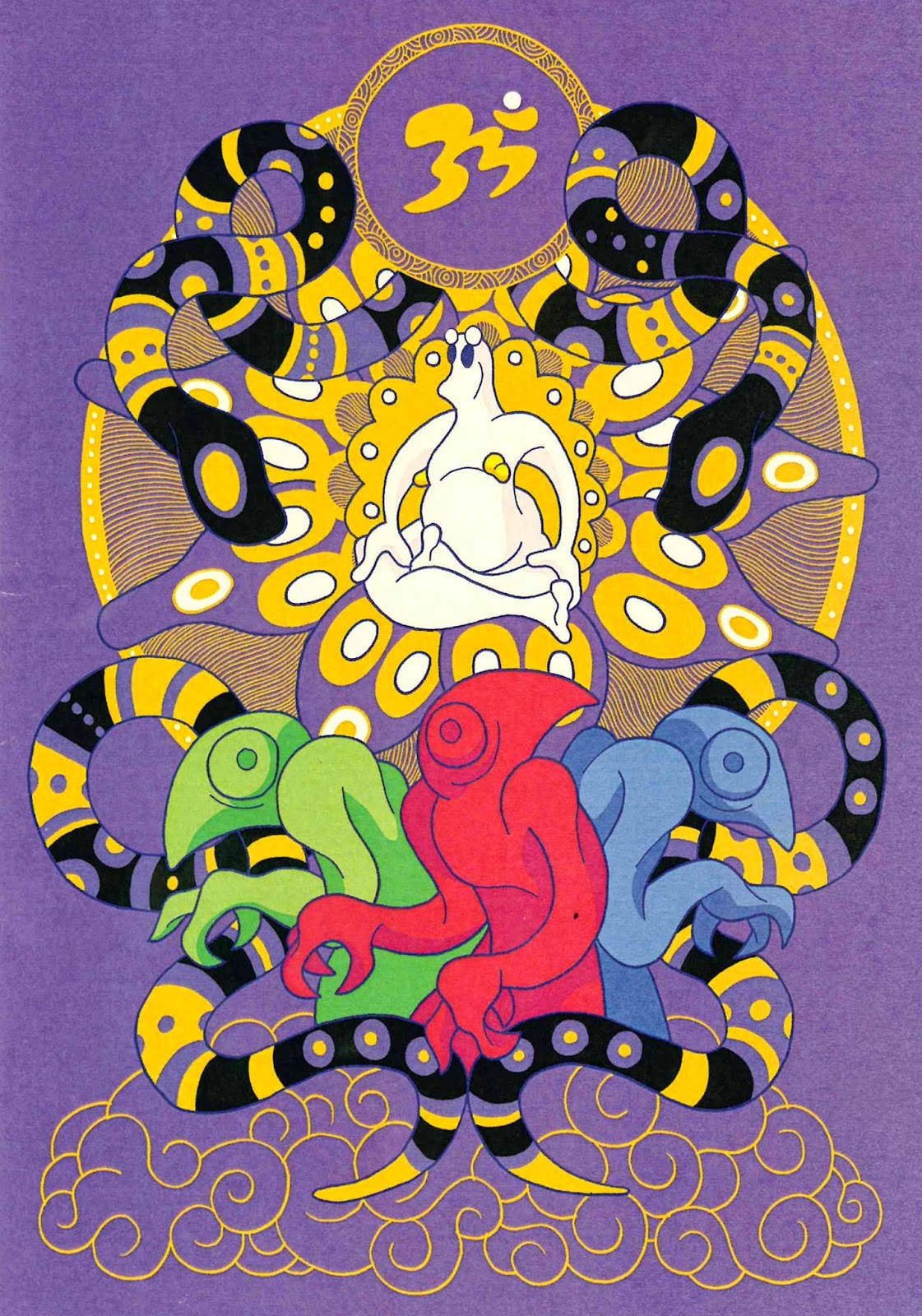 Om by Andy Barron: A short, 10-page, wordless story on the merits of intervention, sumptuously coloured. A yellow-nippled, white figure is out wandering in the desert, when he chances upon 3 shifty figures transporting a large container from their ship. Quickly hiding behind some rocks, he watches as they pull out a bloodied and beaten small creature from within, and proceed to tie him to a stake and burn him, whilst dancing around it enthusiastically. All the while the white figure watches, increasingly horrified and unsure, from his vantage-point behind the rocks, wondering whether to intervene and at what point, as things quickly escalate, and his windows for action tighten.

I admit I was unsure what this was going to be like initially, but Barron's done a clever, clever job. The relentless bright, cheery colours, clean lines, and cartoony characters are a brilliant, surprising contrast with the darker undertones of what's taking place. Barron simply signifies the untoward nature of the dastardly trio by giving them big, sharply-pointed beaked head and a single unblinking eye on either side, as opposed to the more humanoid appearance of the other two characters, I love the use of a line of circular panels to track the swiftly altering expressions of the white figure, through which the reader gauges what's going on, even as we get to see glimpses of it in the rectangle panels alongside.

The central questions here (and I could easily be reading too much into it) are inherently political: is this a message of pick your battles? Do you speak out against wrong-doing and injustice, whether your speaking out will make a difference or not? Do you speak out, even if it's at cost to yourself? At what price a conscience? I'm not familiar with Barron's work, but this comic is apparently one from a series set in the Om world, and on the basis of this, I'd happily read more. 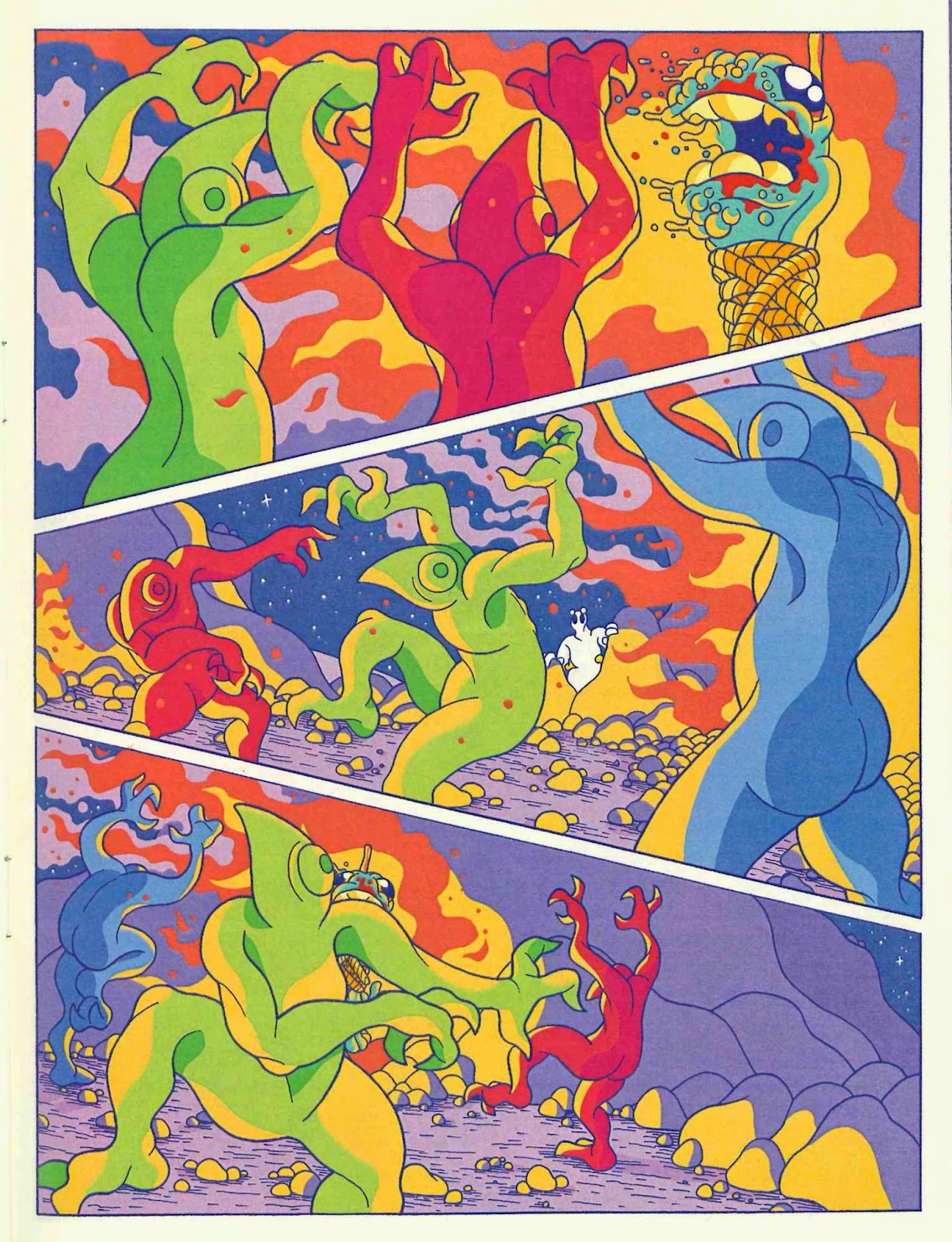 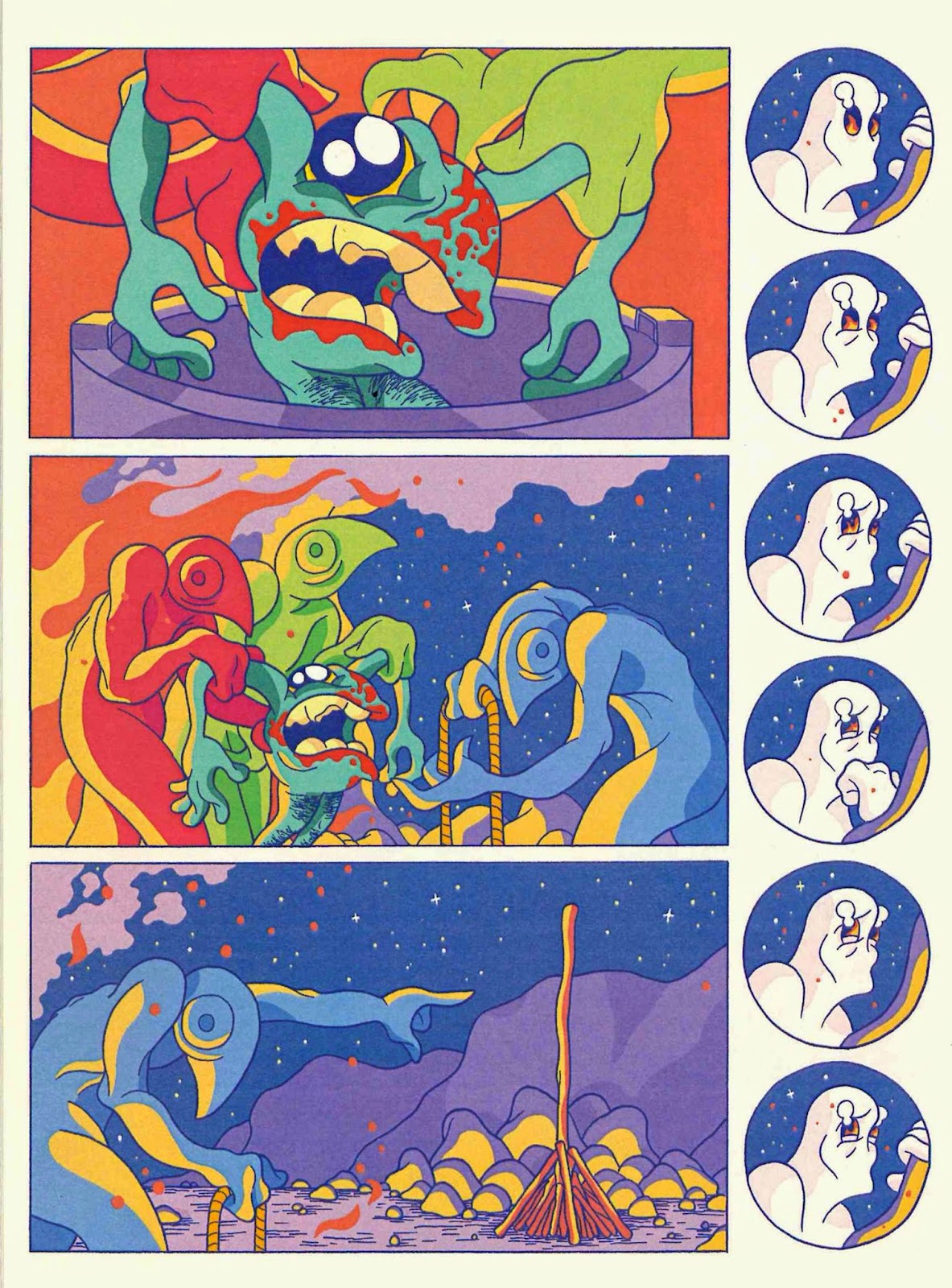 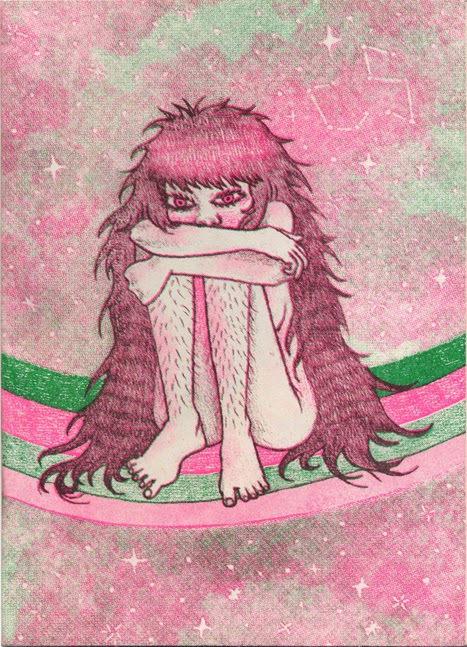 CS by Ines Estrada, Sacred Prism: Another beautifully risographed comic- still so much more pleasing aesthetically. I'm not good with squeamish body horror; you know, reading those stories about someone licking an envelope and larvae hatching inside their tongue, or seeing a video of a worm being pulled out of someone's eye- that sort of invasive, stuff being alive inside you leaves me queasy and sick, and imagining I can feel all sort so wriggling and crawling in and on me for the rest of the day. I'm fine with gore, but open wounds and inserting things inside, either animate or inanimate- nope. Can't deal with it.

One of Estardas themes has been to present women fully and in all guises- not only as the superficial, but also the visceral- the bodily functions, the blood and dirt, embracing the urges,- all of that. In CS, she pulls on that thread a bit further  a tiny woman living amongst the hair on the neck nape of a man is woken by hunger pangs. Looking around for something to eat, she watches as a fly settles onto his skin, and bores a hole through which to suck his blood. Using the fly's example, she eats away at the skin and blood of the wound, quieting her tummy, before falling through the hole and inside the man's body. She rides veins and bronchi, before trying to hitch a ride to the central system, but her explorations and declarations of love for her host body make the other organisms going about their jobs suspicious, and they send out antibodies to destroy her.

While all this is happening the man is sat on a hill beside his companion, contemplating the view, and scratching at his neck. Described as about 'the primitive urge of wanting to feel connected, transcending the microscopic to the macroscopic,' the tiny woman trying to get to the man's central nervous (nerves transmit and receive messages to the brain) system to tell him she loves him, only to be beaten off and dissolved by the other elements, is also interpretive of how we allow ourselves to feel and confront certain truths or realities at specific times. Self-sabotage of a sort. The woman could be representative of an outside member, but is more likely a part of the man that he both desires and yet is not ready to acknowledge at this moment. The muted fluorescent pink and green connote both aspects of that : the pink very raw, all blood and warmth, where the green is calmer, reflective. Estrada tops it with tinges of comedy and cute. 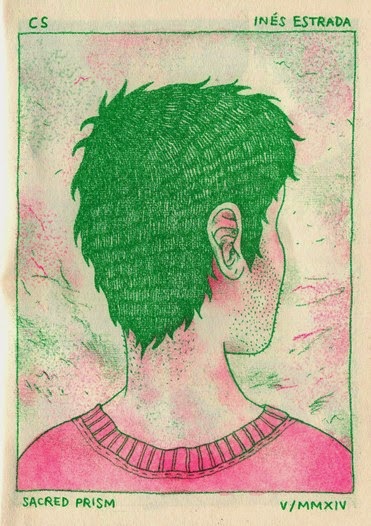 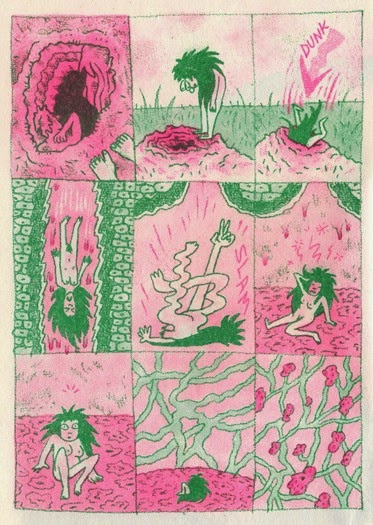