Comics is a flat circle... with bumps 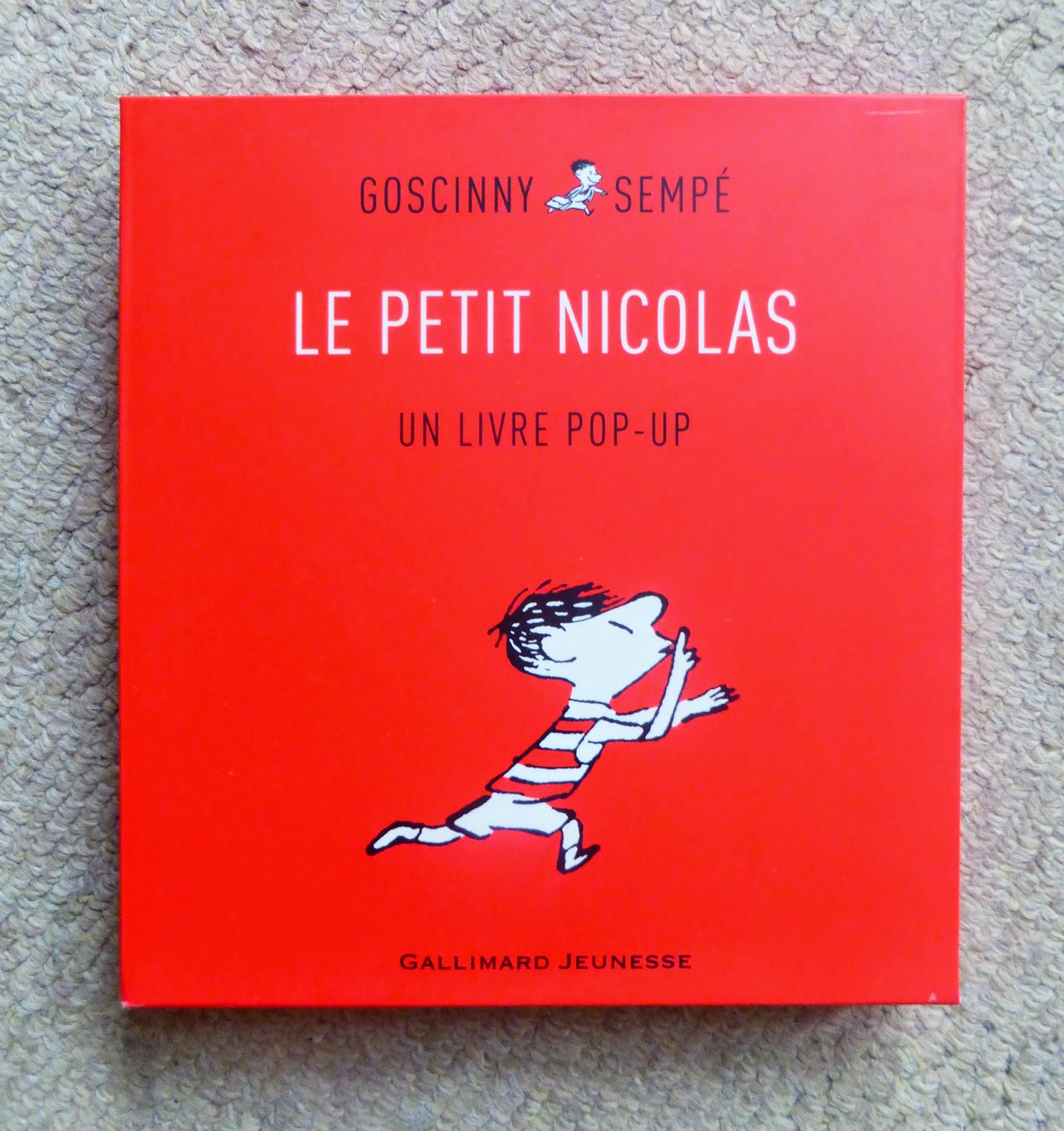 A new pop-up book! It is such a lovely, lovely thing: a solid little red square that comes in a matching slipcase, Le Petit Nicolas was released in 2008 (I'm only 5 years late) and is based on  a series of French children's books, penned by René Goscinny and illustrated by Jean-Jacques Sempé in the 60's. I can't remember where I saw some picture of this, and had to investigate further. Obviously I can't read it, having no French, but that's secondary, really- there's only about a line on each page anyway. It's beautifully done in largely black and white with only minimal pops of unobtrusive colour- some red here, some pink there. I like the use of clear plastic -particularly to subtly connect two aspects, e.g. a flying football and the leg it was kicked by, and the reflective mirror card and cut-outs. Nice perspectives too, with layered elements to provide depth, and raised platforms. It's just so charming. A little treasure. Have some photos: 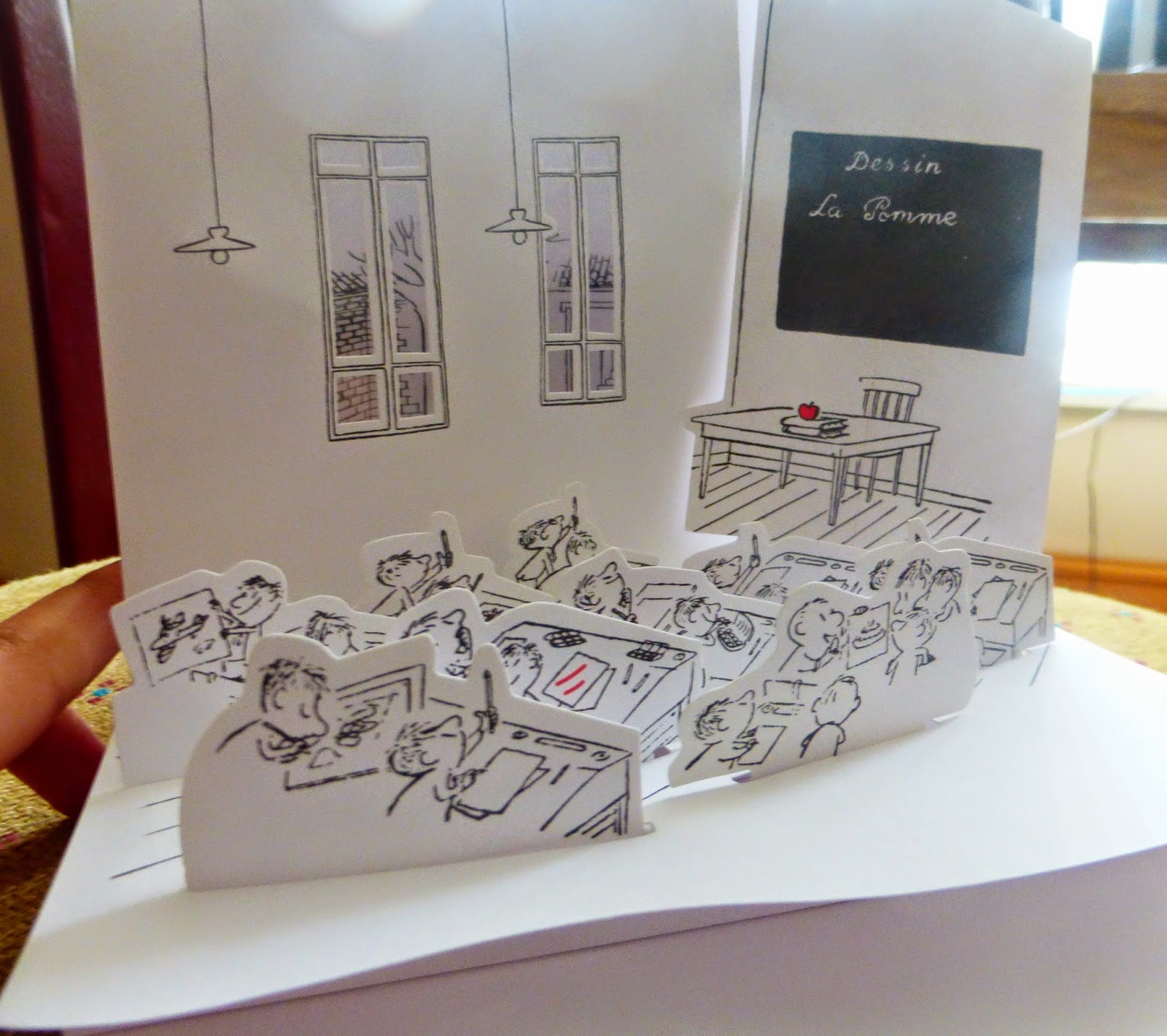 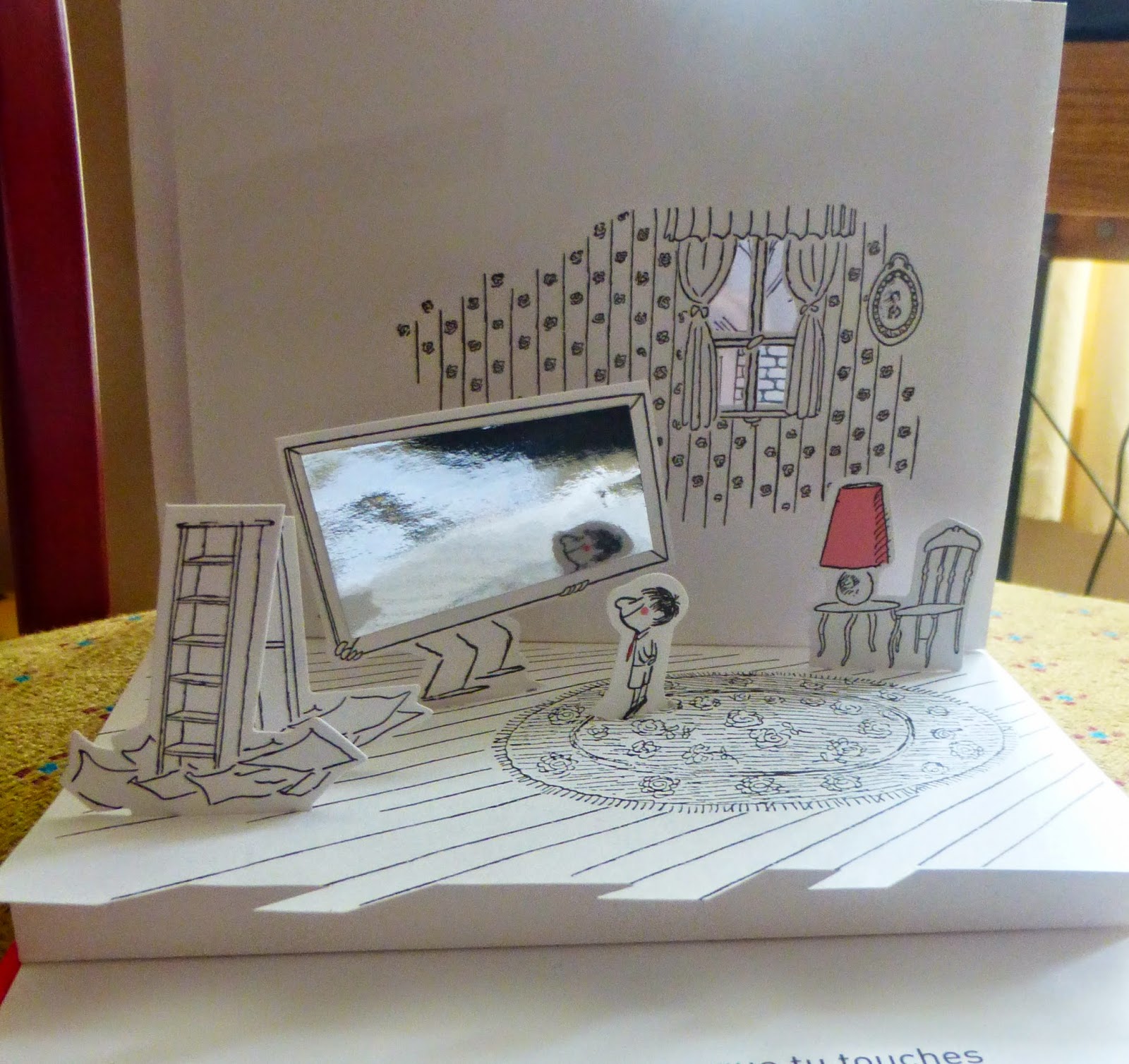 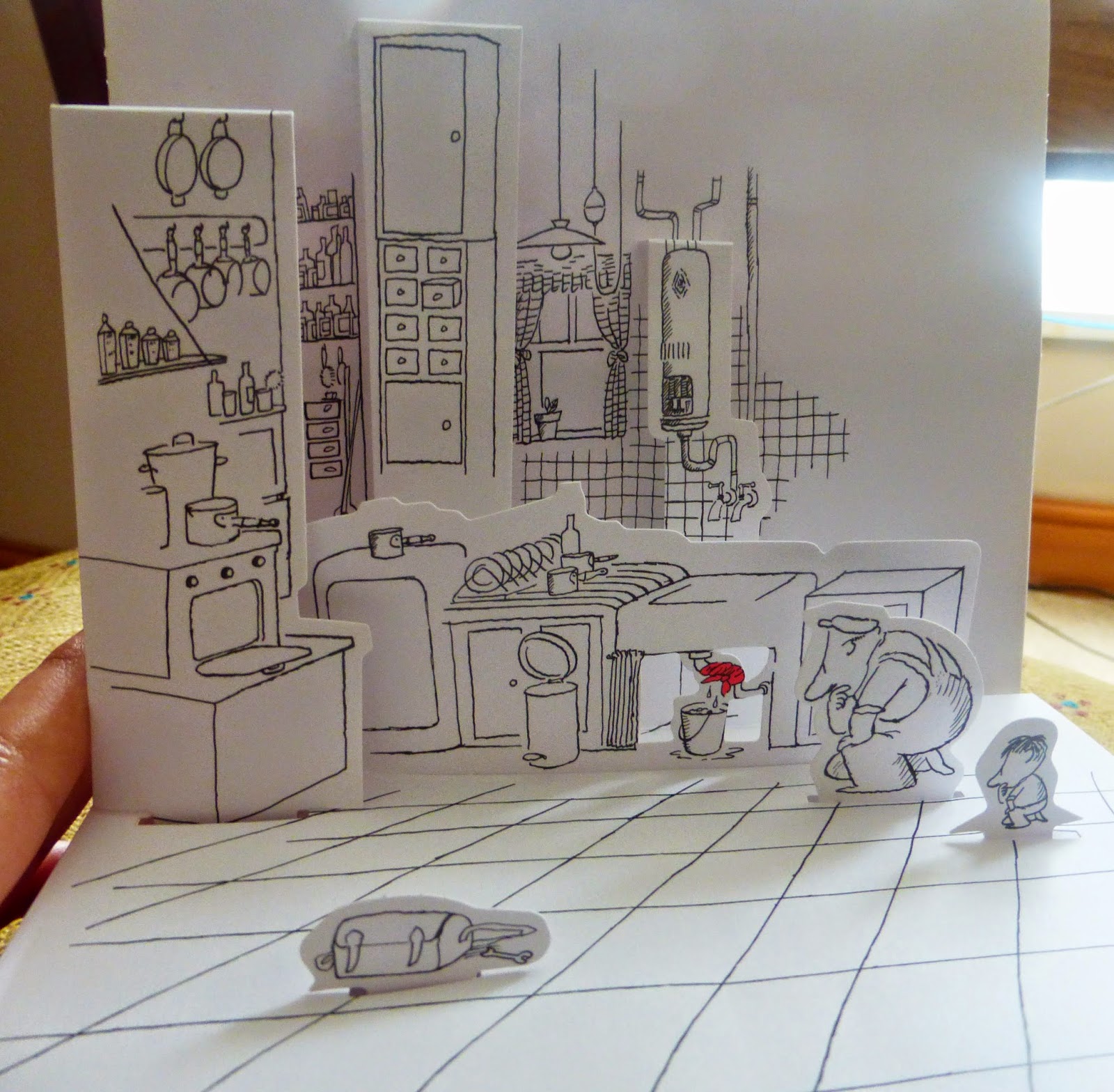 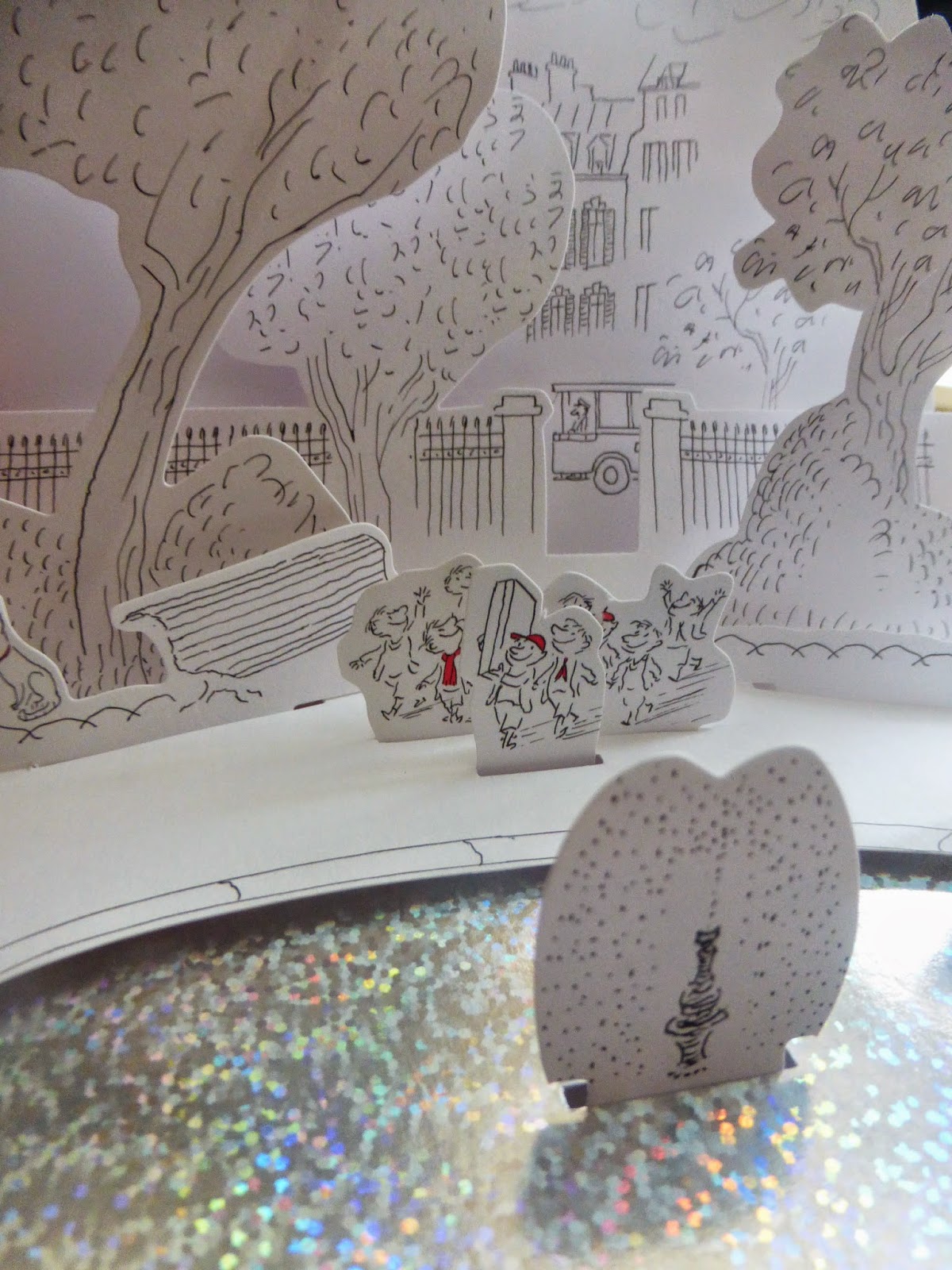 Oily comics- Have to confess I haven't checked out Oily in a while, but I've been reading the awesome-ness that is Daryl Seitchik's Missy comics on Tumblr and realised that Oily had published print editions, so had to get my hands on some. The Missy strips switch between being seemingly loosely based on Seithcik's own experiences and those of the Missy persona as she grows up, navigating school and friendships. It's caustic and vulnerable and funny all at the same time, and most of the strips are freely available to red on Seitchik's Tumblr, which you should take immediate advantage of.. Charles Forsman's risographed Luv Sucker looked too appealing to pass up- seems to have an 80's aesthetic going on, along with that minimal fashion illustration line- looking forward to reading it. 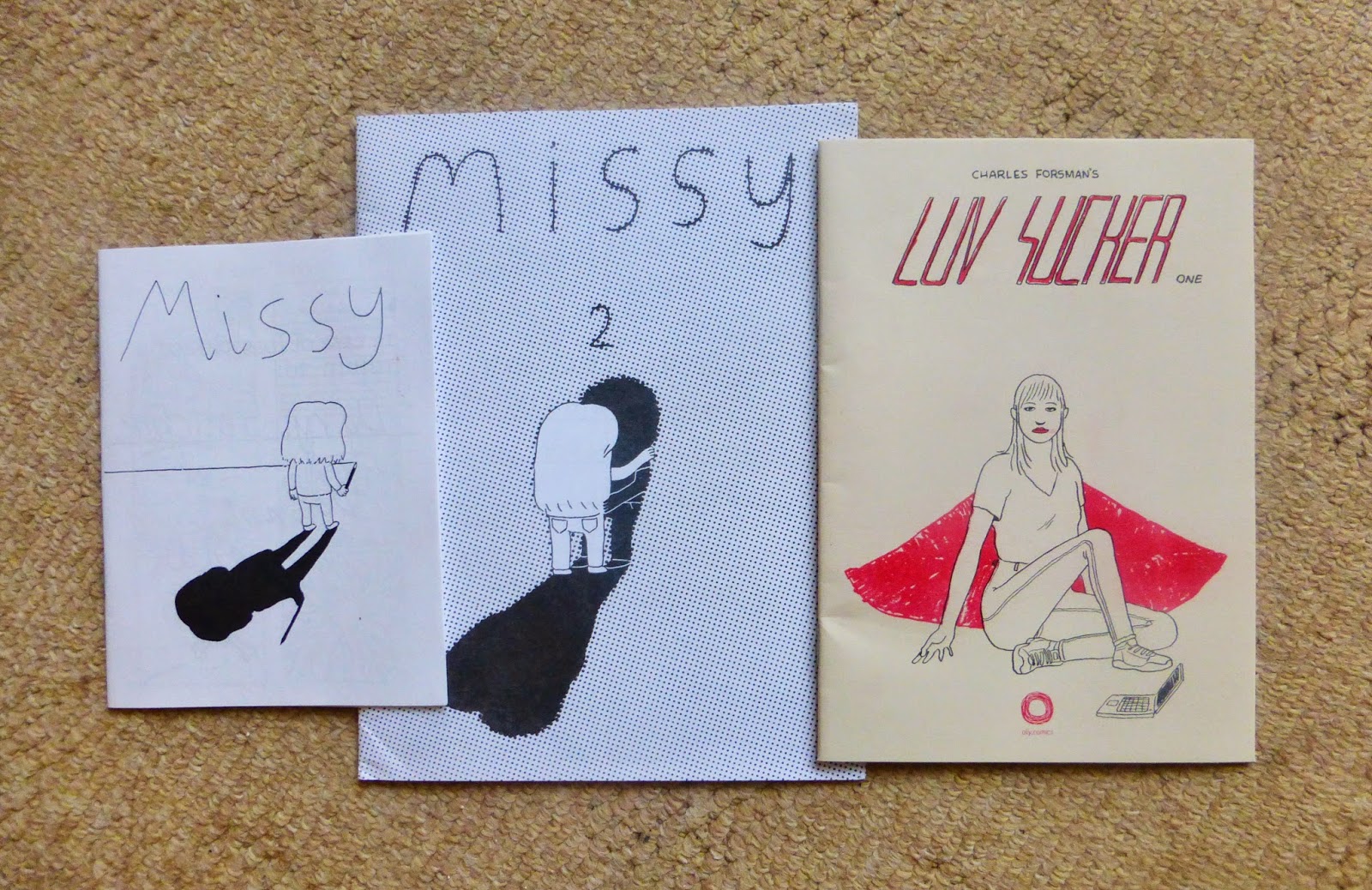 I popped into OK on the way home from work, and Oliver -being so fucking good at his job as he is- showed me Cinebook's latest, Kenya, just as I was about to leave, so of course I had to buy it. It's written by Rodolphe and drawn by Leo (of Aldebaran, Antares, and Betelgeuse fame), who I like very much- he's great at drawing beasts and dinosaurs- but whose people all look the same: characters with neatly symmetrical features, very white teeth, distinguishable by hair and skin colour only. Kenya continues a dubious European tradition of containing copius amounts of racism and sexism explained away by being set decades back (1947)- aka When Things Were Different, so that's okay, right? 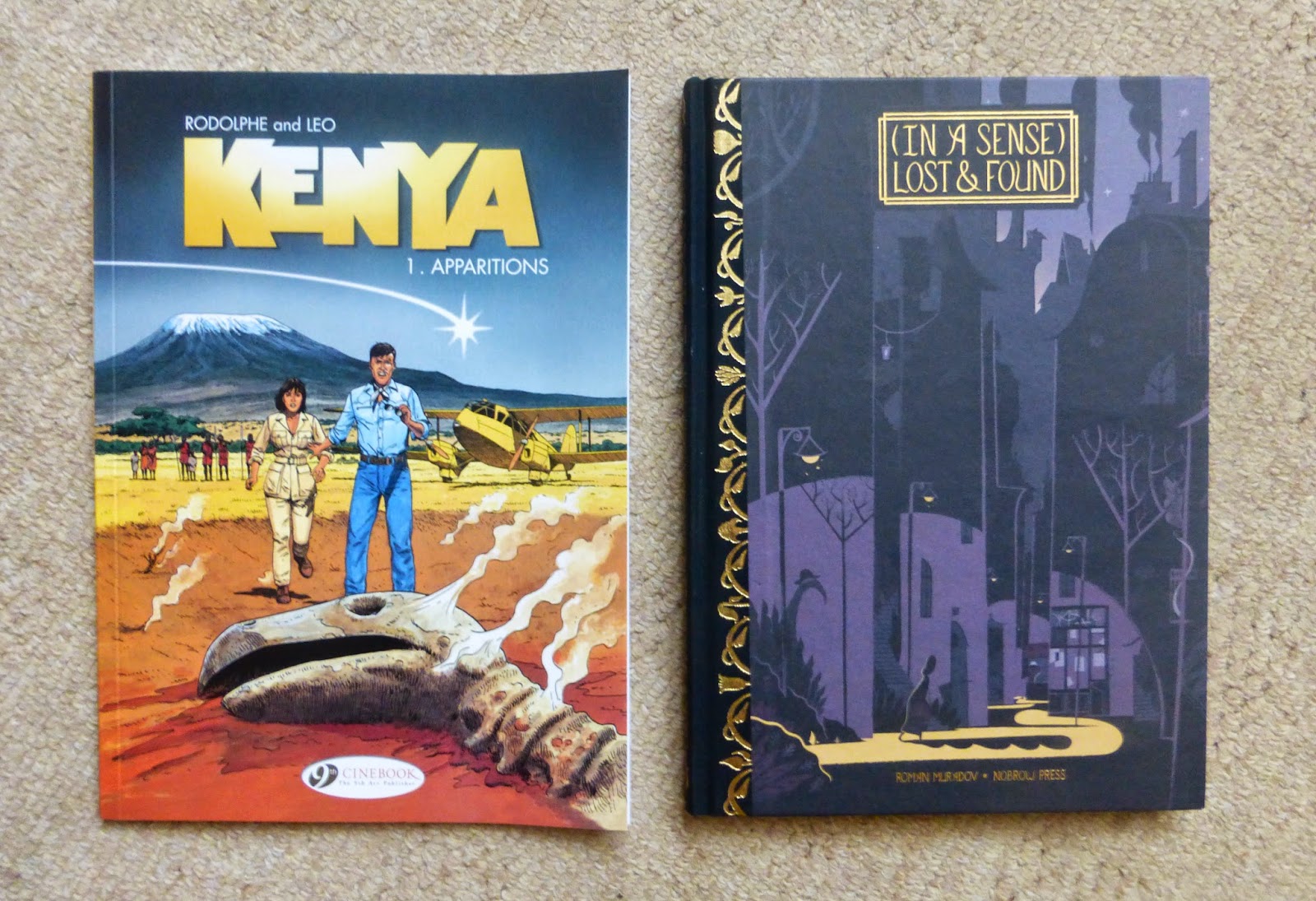 This is the first in (I think) 4 volumes- maybe more- which sees a hunting expedition disappear without trace after they encounter an impossible creature. Naturally, the British, being the nosy meddling types they are, send an undercover schoolteacher to investigate further, and as she picks up the trail, she makes startling discoveries of her own. I wouldn't be into this, apart from, y'know, weird and wonderful beasts and dinosaurs being my Achilles heel. Some panels from Kenya below: nice splash page of the huge, furry, brown giraffe the writing expedition bumps into, an opulent castle in the desert complete with eccentric rich dude, another mysterious hairy, stumpy creature viewed from a plane- it's all lined up to keep me reading, dammit. 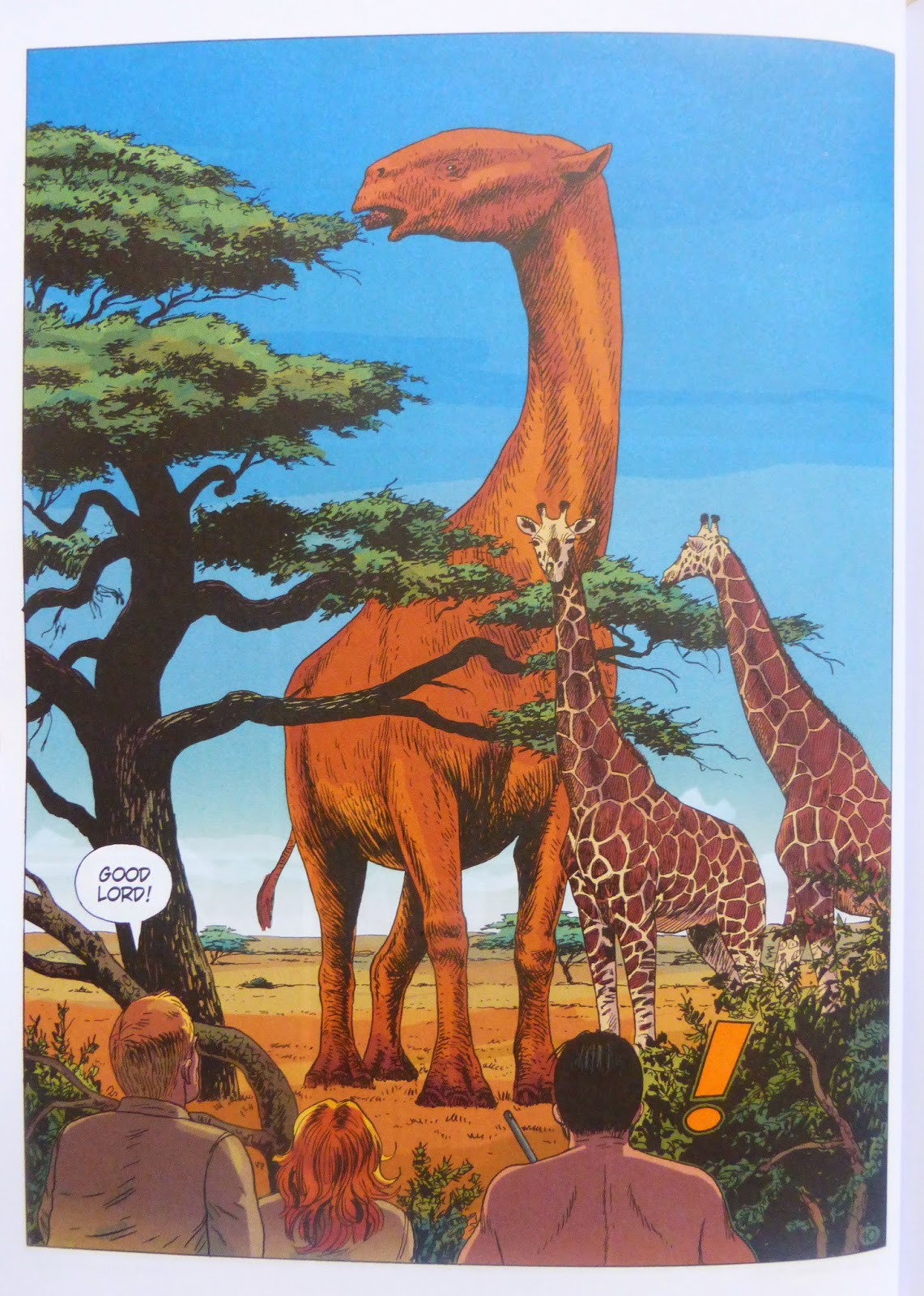 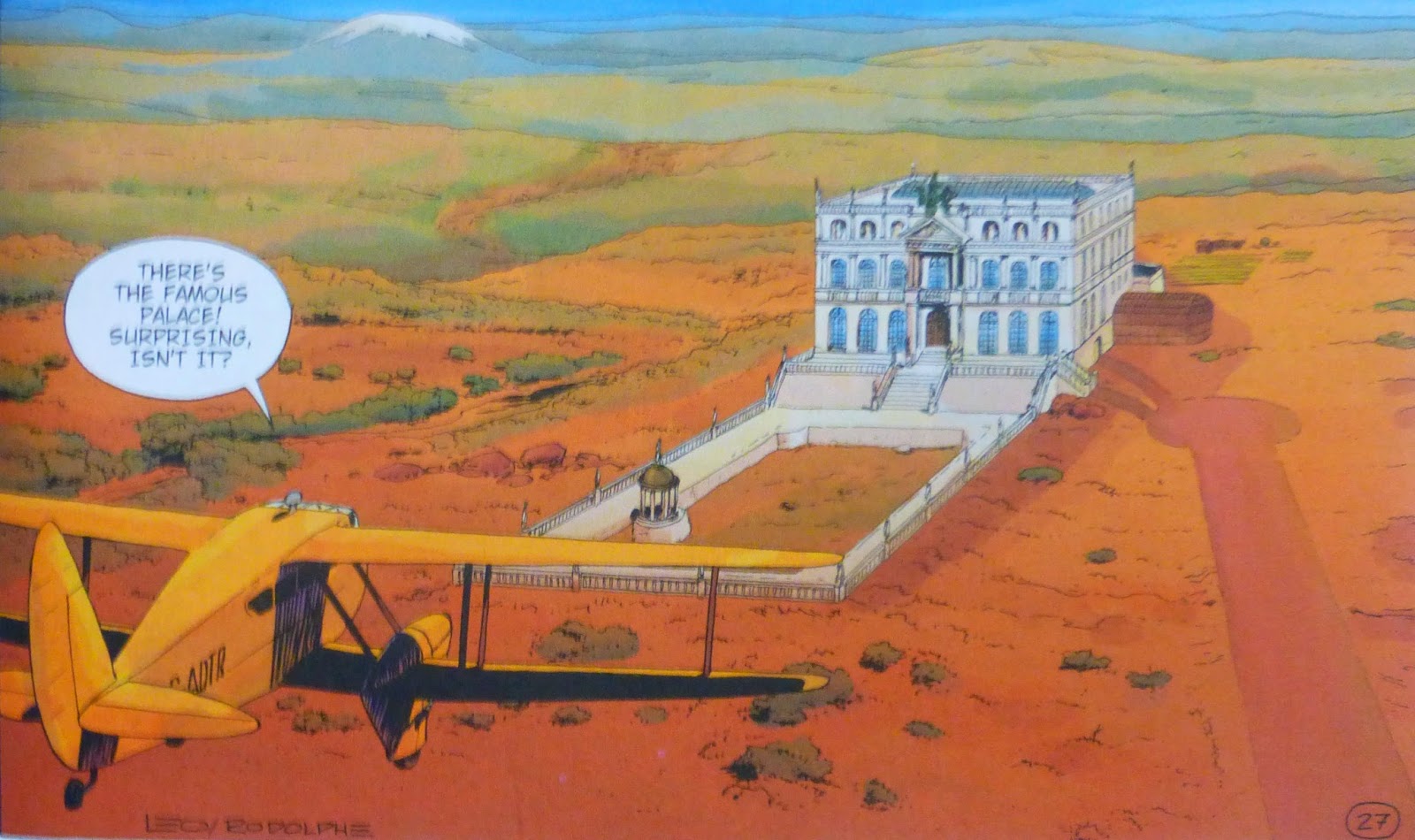 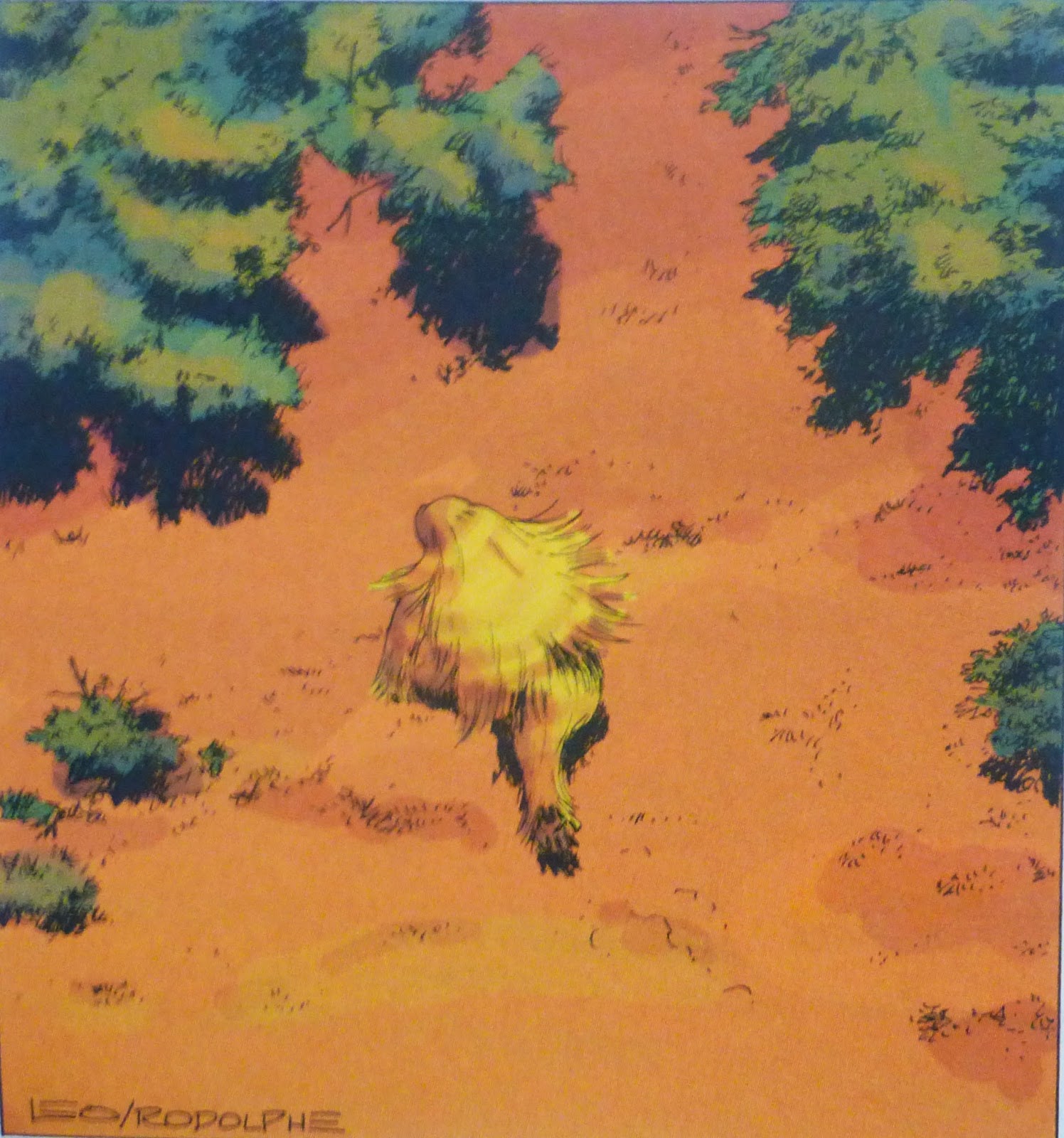 Nobrow have done such a gorgeous job with the printing/production of Roman Muradov's (In A Sense) Lost and Found- gorgeous cloth-covered spine with gold embossed pattern. I saw Michael Cho's Shoplifter in the flesh for the first time the other day, and the production job on the cover is pretty horrible: a stiff, shiny glossy paper that seems to be poorly glued around a thicker cardboard cover. Pantheon sent me an uncoloured advance proof a few months back, and I liked the book enough to want to buy a copy upon release, but that wrinkled, shiny paper put me right off. That sort of thing baffles me- Cho's done a beautiful job with the art and cover, it's his first graphic novel, I read somewhere it's Pantheon's first comic as a publisher, and that's the treatment it gets?

Roman's book is the best thing I've read from him yet, and as mentioned, it's fantastic to see it given proper treatment: larger pages, lovely paper stock- all the better to show off his stunning art. Here's an excerpt from the review I wrote of it for Publisher's Weekly: 'F. Premise awakes one morning to find her innocence has gone missing, much to her father’s shame and also to the horror of strangers, as she discovers after fleeing her home. Innocence here is depicted as a literal, tangible thing that can be seen —or visually hidden from—and the story examines the manner in which society labels and judges this quality. As Premise pursues the thieves who stole her innocence to a mysterious lair, she becomes more and more ensnared by a strangely mundane world, one in which she must decide what it means be innocent and what that might be worth. The art that takes center stage in the metaphorical narrative, shapes and colors working together harmoniously to produce an utterly immersive beauty.' 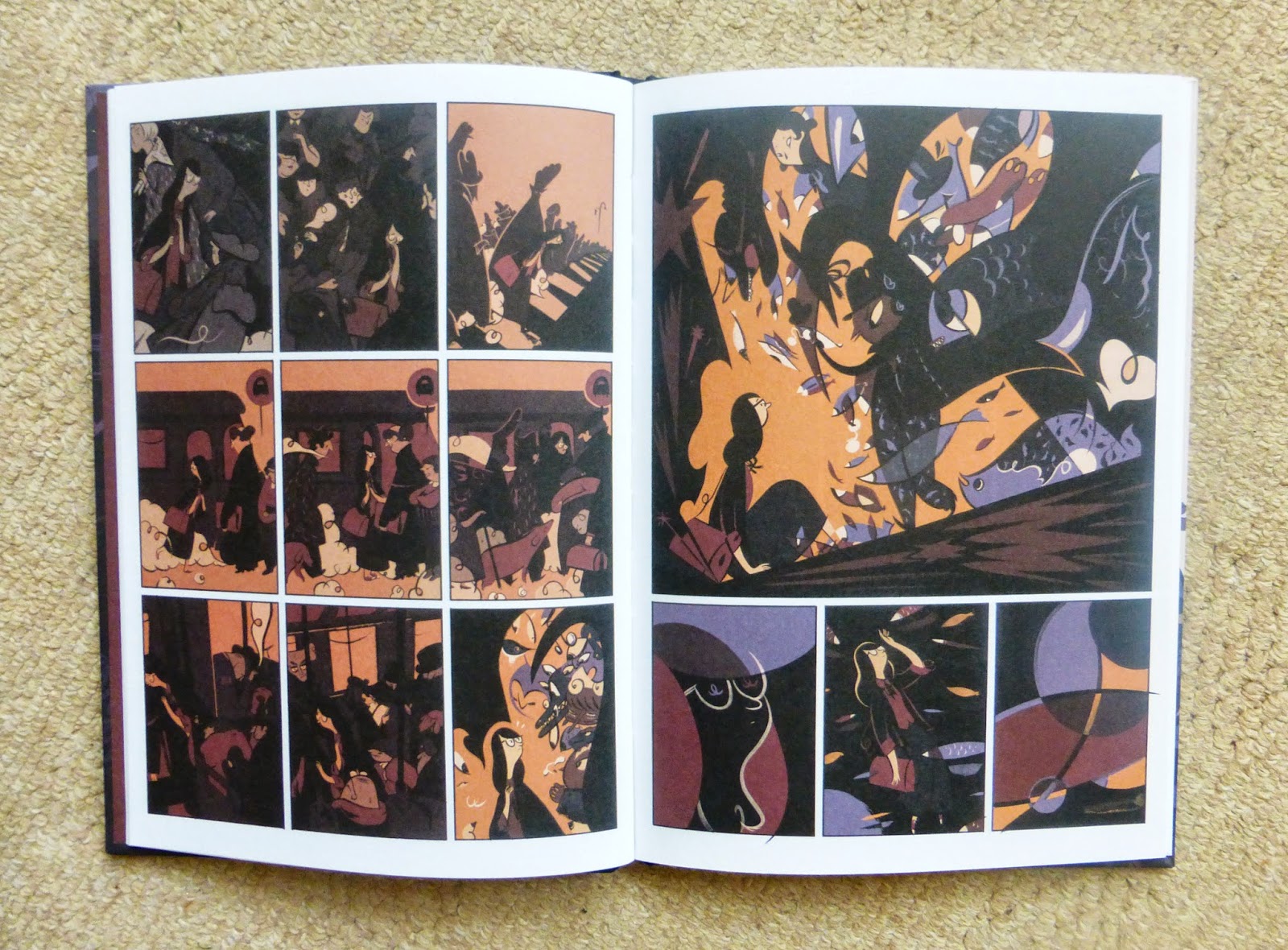 Andy gave me this ages ago (my friends all have better taste than me), and only now that my feelings towards the Dredd-verse -namely Judge Anderson- are warmer, have I opened it to read. That cover is so good, especially the fluorescent pink and green which really gives it life, coupled with the image of Anderson trapped in that eyeless grill. This is the Judge Death story that contains the iconic 'Gaze into the fist of Dredd!' panel, which is cool, but the visual I liked much better was the double page spread of all four dark judges together, looking bad-ass and bat-shit, although it's illustrated by Brian Bolland and he's done a unarguable job on the whole thing. I'm still at that stage with Dredd, Anderson et al, that I'm reading all the widely considered excellent stories first, and this is another one of them. 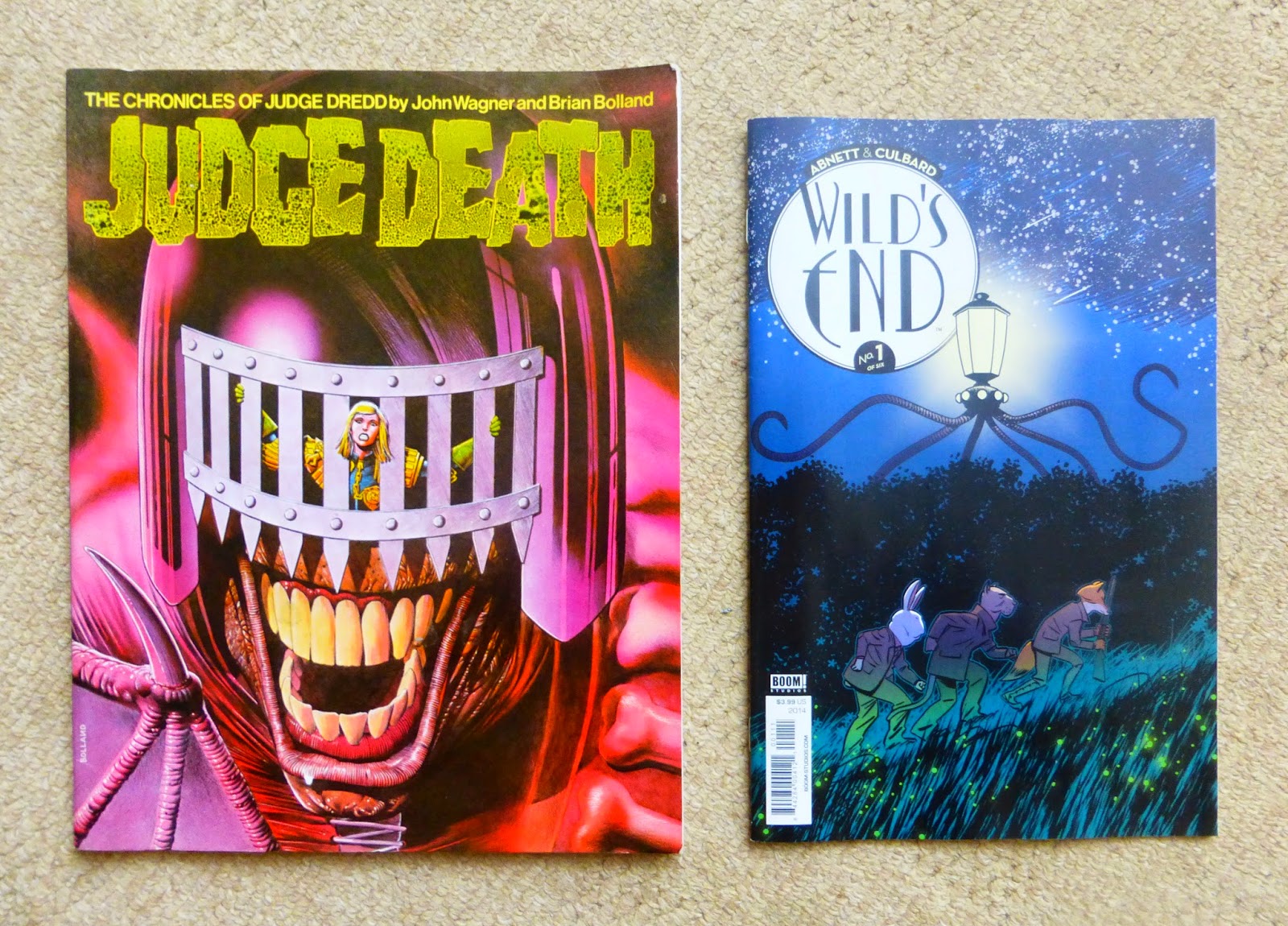 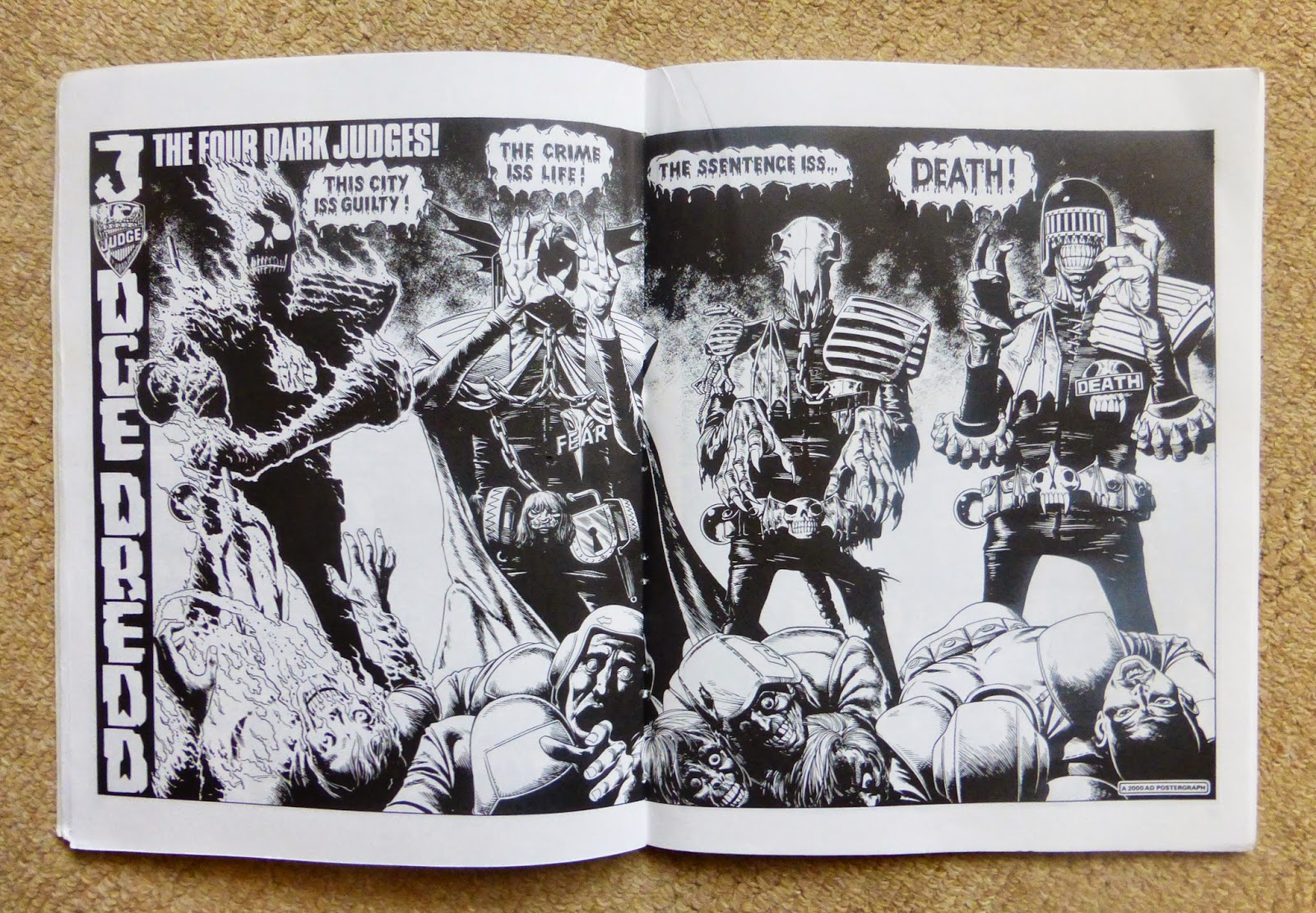 Been in two minds about whether I was going to pick up Wild's End or not- it sounded like I might enjoy it, but also something that could go wrong- it's being pitched as Wind in the Willows meets War of the Worlds- but after seeing what a magnificent job Ian Culbard's done on the art here, I was swayed. Don't want to reveal too much, but a space ship crashes in a field, witnessed by a fox, which eventually leads to a small group of animals going to the alleged crash-site to investigate further. I'm trying to scale back my spending, but it's impressed enough that I've added it to my pull- it's only 6 issues, so hopefully the damage won't be too bad. Credit to Abnett and Culbard- they're created a strong first issue with a real sinister undertone to it, despite the bright colours and rotund cheerful amiability you see.

Snapped a couple of pages I liked: the pink page on the left is near perfect; look at them colours- the pinks, green, purple, and the turquoise of the sfx. The way the pink window frame cuts through the green and purple, the outside looking in, drawing closer, giving a sense of crosshairs and entrapment. Love the blue and orange combination of the night sky and fox-fur on the right page, as well. All Culbard's animal characterisations here are superb- look at that pig, and the fox- they retain their inherent animal features, shapes, and associations, but on two legs. Excited about this now- hope it lives up to he standard it's set. 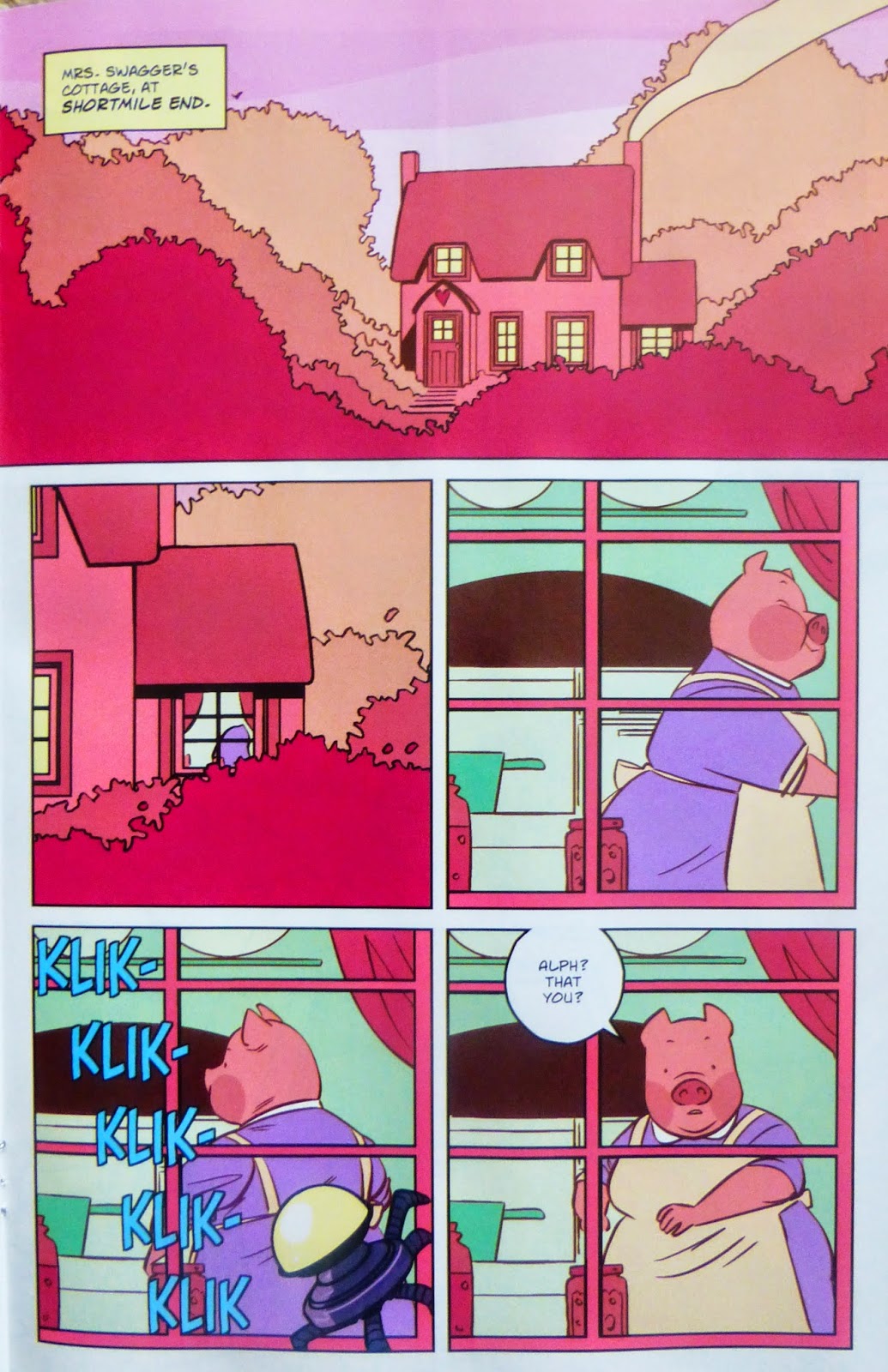 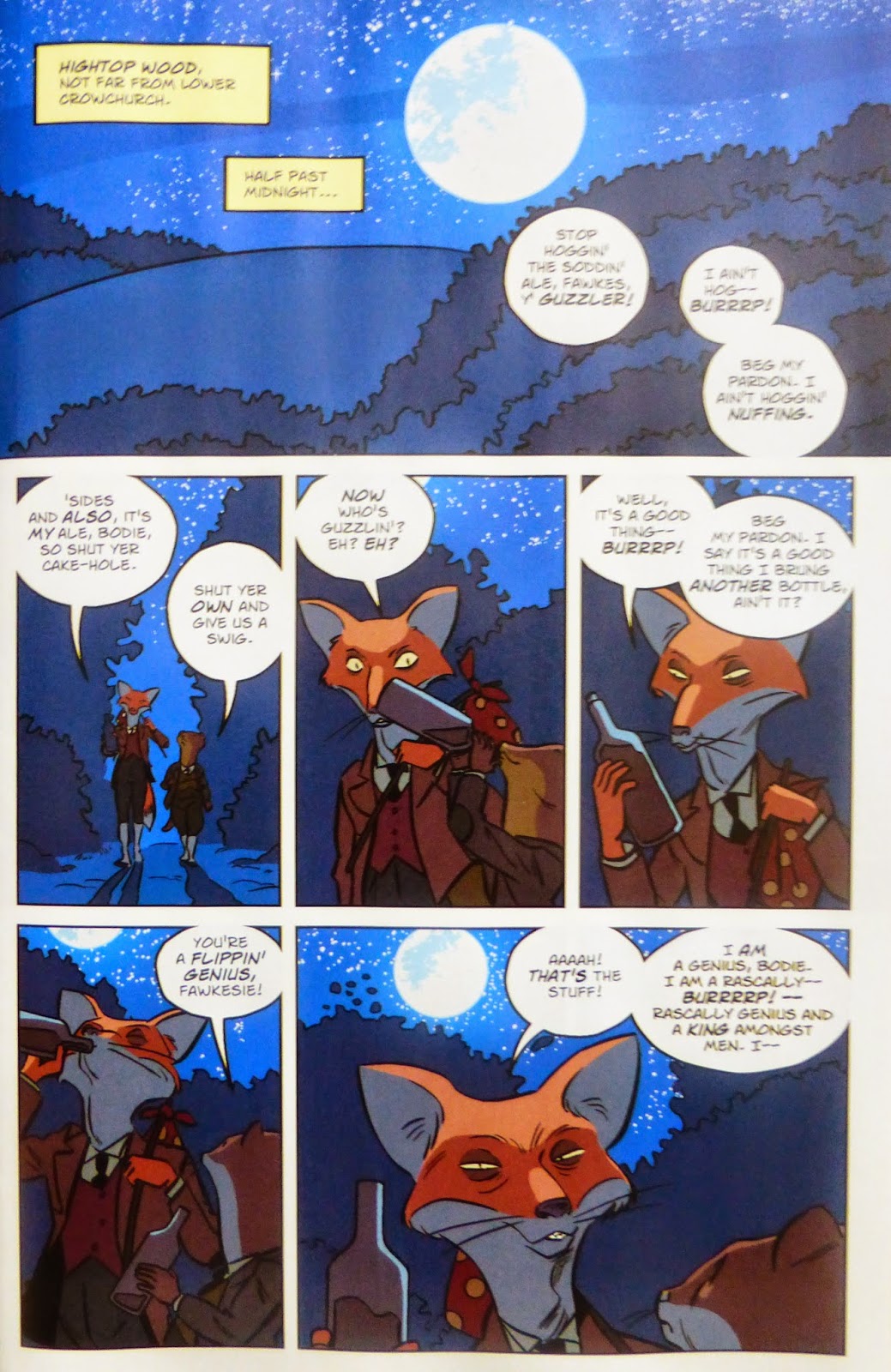