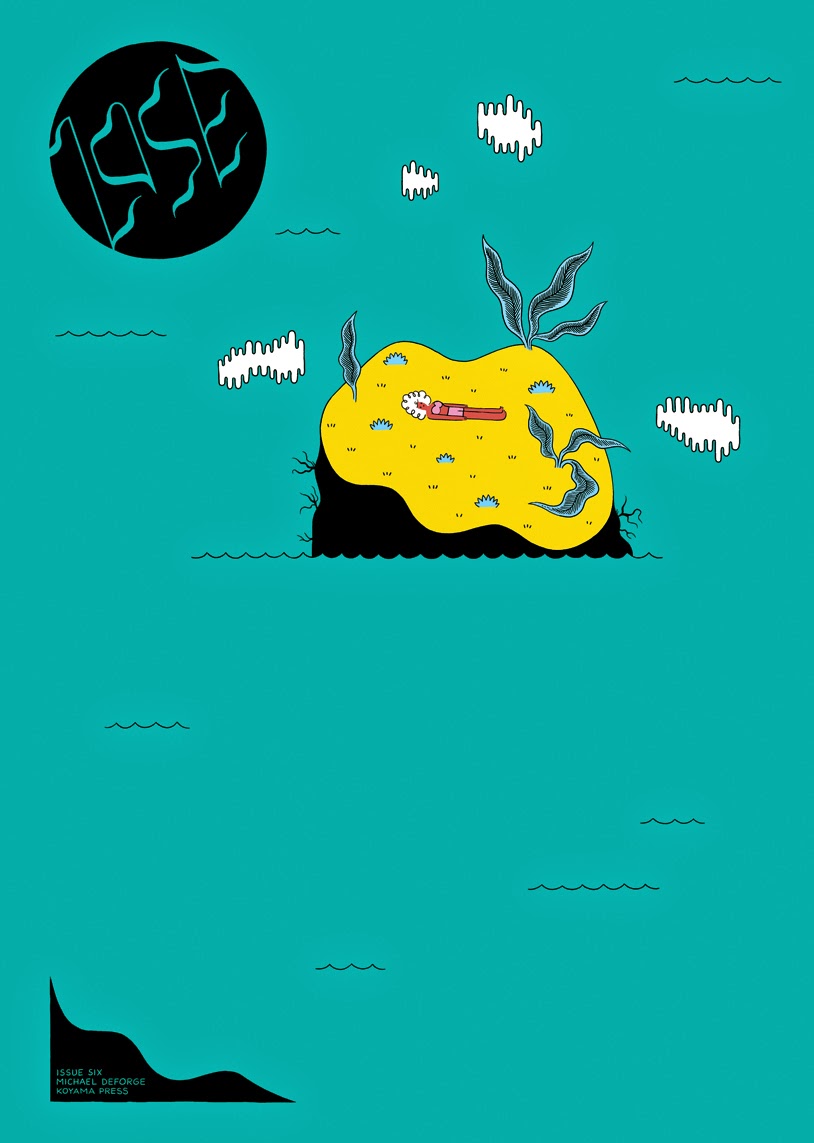 It's that time again, as we go on a wander around another comic creator/authors/whatever's the acceptable term nowadays bookshelves and tie ourselves into knots of envy as we gaze upon other people's collections. Today it's the turn of the man who's pretty much trademarked the 'finest cartoonist of his generation' (I'm getting really good with these introductions, eh) tag for the past few years, Michael DeForge. I've not written about DeForge yet, but I think one of the most impressive things about his work is how it's very distinct and individual and yet very fully formed and realised, so you get the freshness, the feel of something new, but in a complete, whole way. As well as being ridiculously good, he's also impressively prolific with a number of releases this year: Ant Colony, A Body Beneath, and most recently, the latest and sixth installment in his acclaimed Lose series.

Today, however, Michael's here to talk about his comics/book collection, and introduce the world to a new system of storage: milk crates.

'Okay, so I tried to only include photographs of the shelves that have comics on them, but there was a bit of spillover. I store most of my books in milk crates. 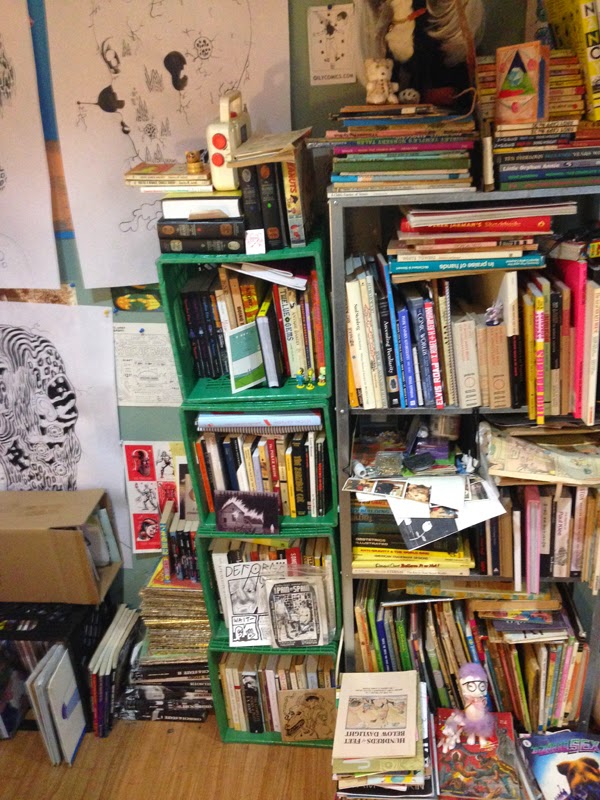 During my last move, I was leaving an apartment that was only a twenty minute walk away from my new apartment, so I had the bright idea to do it all myself and without a car (I don't know how to drive.) I rigged up a dolly so that I was able to stack about twelve crates on it, held together with duct tape and string. I took trips back and forth between places, moving everything by hand over the course of a week. I was overly ambitious about how much the dolly could balance at a time, and the on one of the two dozen trips I took, the whole thing came apart in the middle of traffic. I lost a full box of Richard Corben issues to the road, plus some other stuff. An elderly Portuguese-speaking woman saw me trying to gather all my books while stopped cars honked at me. She very generously came out to help me, until she picked up a stray Shintaro Kago comic, examined the cover, and silently turned around and walked back inside of her house.

Anyway, I'll go through "stack by stack." This first one has some miscellaneous visual reference (books and clippings), some illustration books, and the small portion of my children's book collection that I have left (I cut 2/3rds of it out during the aforementioned move.) 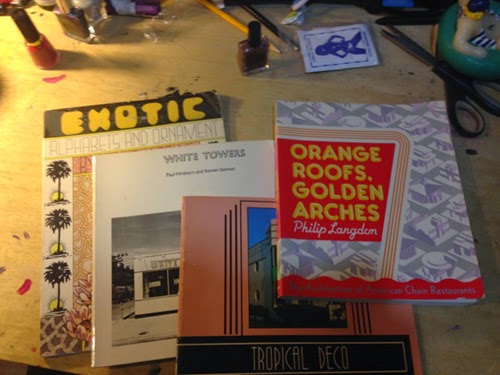 An example of the sort of reference materials I keep, and how I group them. These were all purchased for a comics project I was working on last year that I've since abandoned, but the "Orange Roofs, Golden Arches" and "White Towers" books are now part of a small collection of material I'm amassing on fast food architecture. 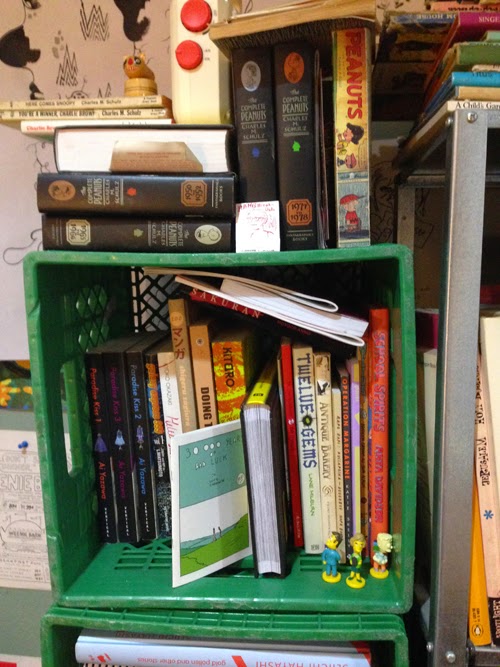 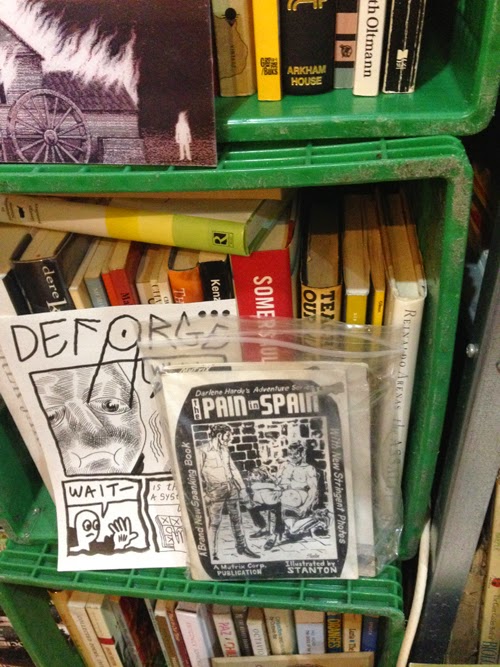 Visible is art from an Andy Burkholder strip, and "Pain in Spain," an S+M book with Eric Stanton illustrations. 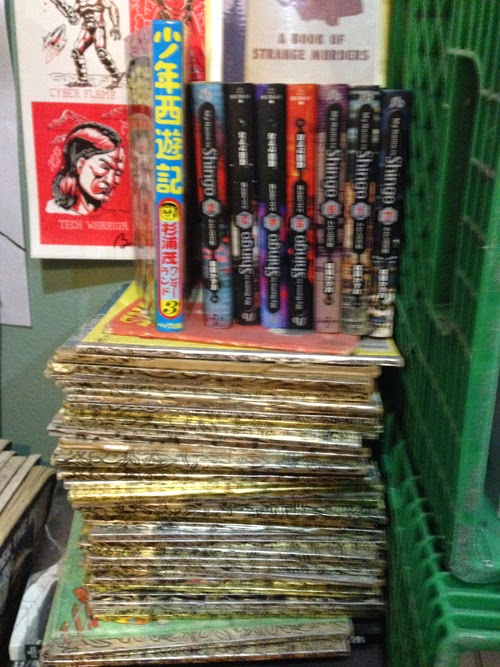 Some Little Golden Books, and volumes of Kazuo Umezu's My Name Is Shingo, which Peter Birkemoe kindly brought back from Japan for me. 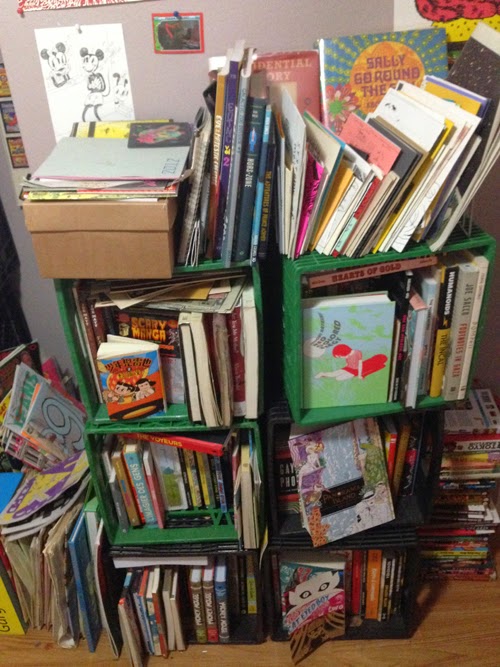 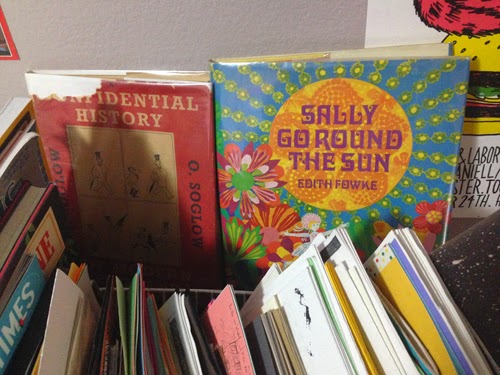 Second stack. Sally Go Round the Sun is my favourite children's book. It's a collection of children's rhymes and folk songs. The illustrations by Carlos Marchiori are gorgeous. I don't have any other print work to his name, except for some drawings he made for a pamphlet full of recipes that Chatelaine published. You can watch an NFB short he animated about smoking here (https://www.nfb.ca/film/drag). Edith Fowke was a CBC host who produced a number of records of Canadian folk recordings, including one for Sally Go Round the Sun. 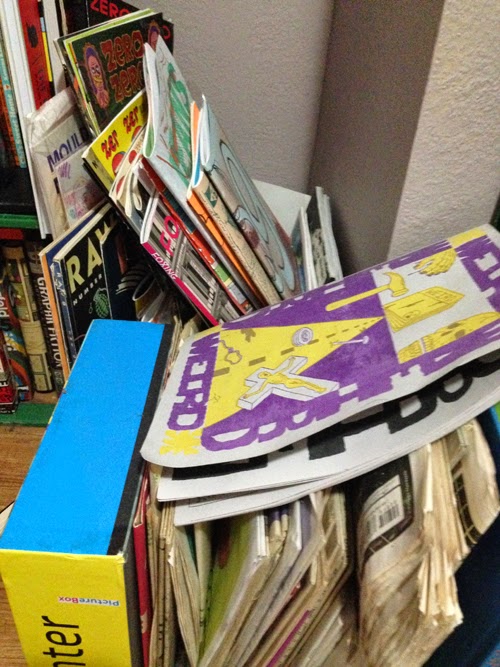 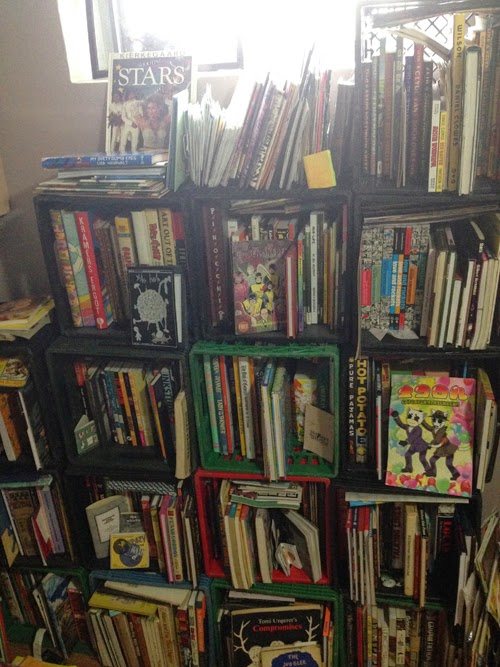 Visible on this third stack is "Shooting Stars" by Rod Kierkegaard, which Noel Freibert gave me as a gift last year, Noel's most recent comic "The Hole," and some furry Watchmen doujinshi I found at the Beguiling once. 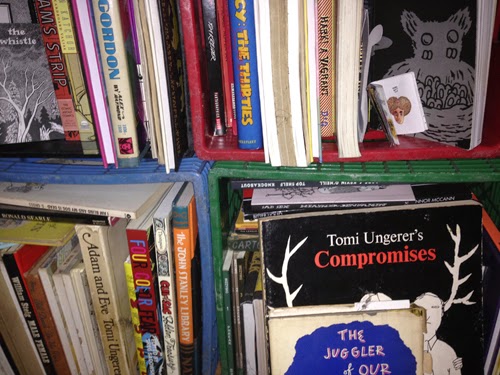 On the left is one of Chester Brown's Christmas card horror comics. Also visible is my Teratoid Heights copy. I used to own a few small Mat Brinkman zines that I bought in high school for a buck or two each. My friend had a spare copy of Teratoid Heights, which at the time was too expensive for me to buy, so I traded the zines for the book. Now those zines periodically pop up on eBay for a ton of cash. Oops. 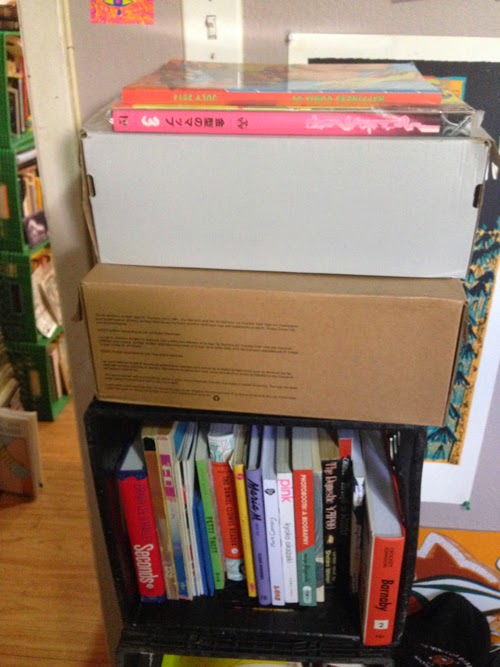 The shoeboxes are full of zines. 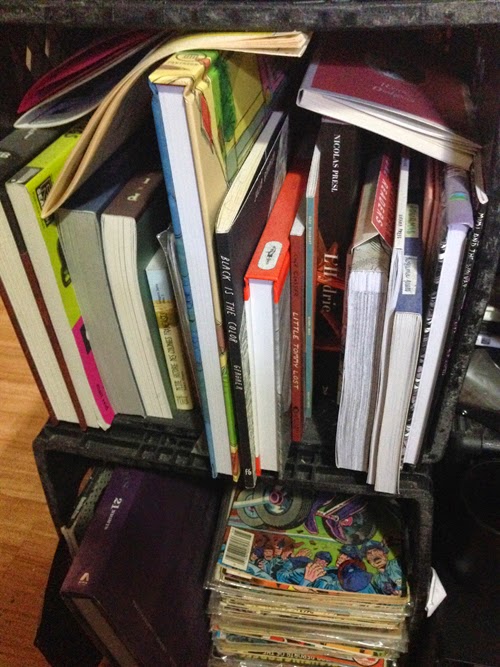 My Jack Kirby pile, next to some Prince books, which are sort of obscured in the photo. 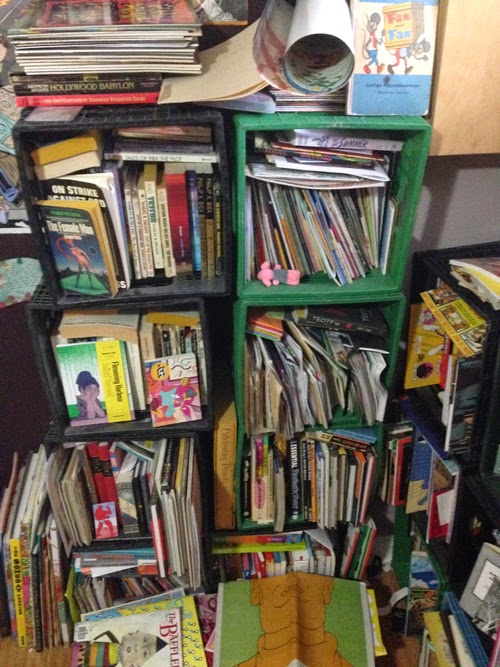 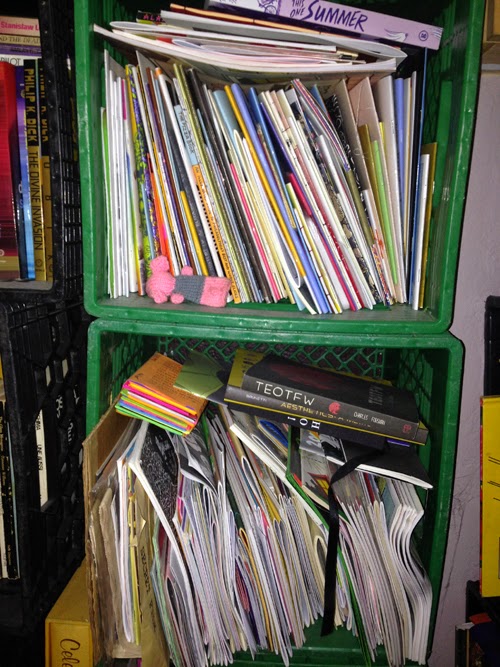 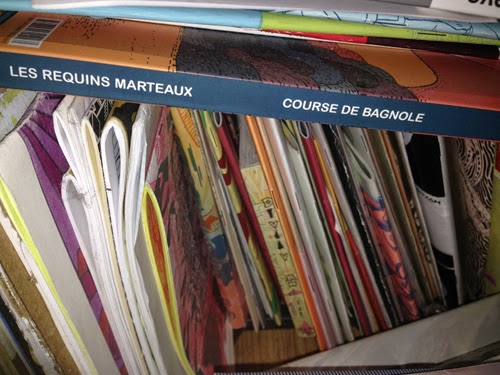 I've managed to sort most of these by author or subject matter. 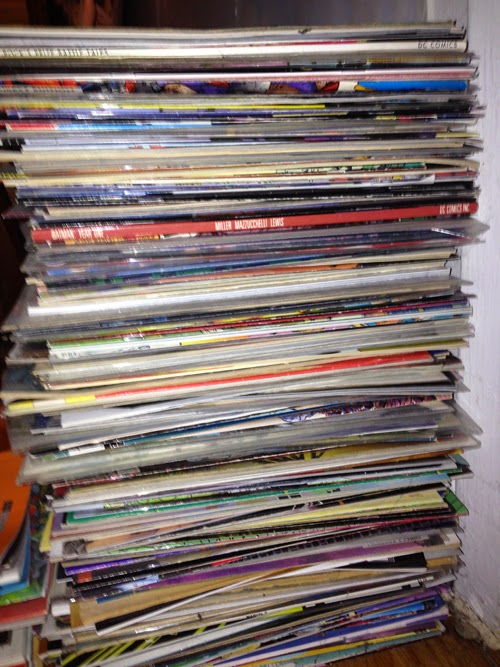 And for completion's sake, here is one of my many floating piles of unsorted floppy comics.

Zainab said I should also pick three books to expand on, so here's three: 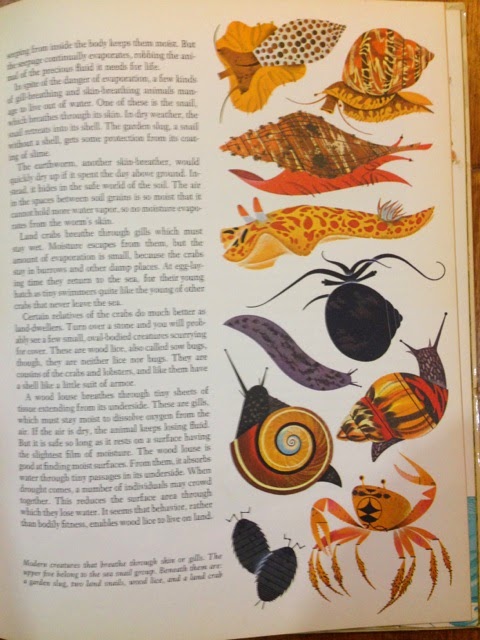 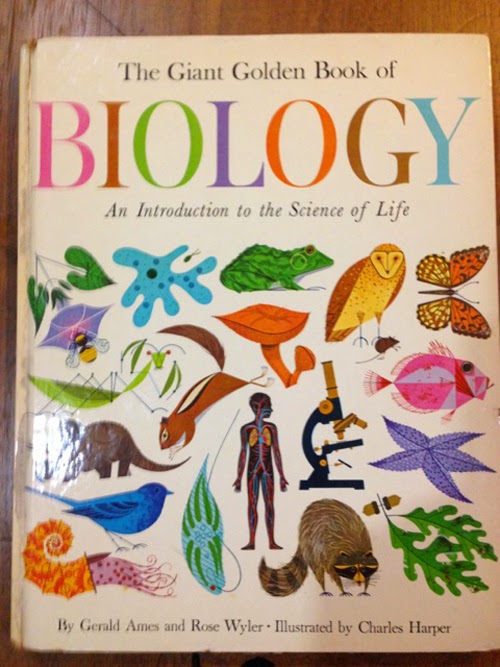 The Giant Golden Book of Biology, with illustrations by Charles Harper
This took me forever to find, and I lucked out and got it for a three dollars from the basement of a used bookstore that was going out of business. It was surrounded by a stack of other illustration books covered in mould. I was really floored by Harper's work when I first came across it, and it prompted me to try to make my own drawings more minimal and efficient (something I still struggle with.) My sister now has a Charles Harper back tattoo. 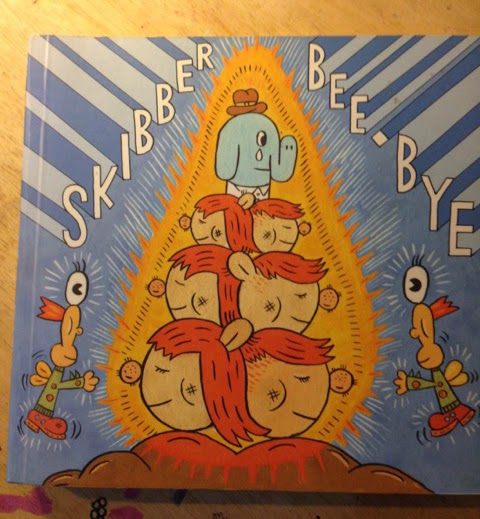 Skibber Bee Bye by Ron Rege Jr
My first Ron Rege comic, and one of the greatest comics ever made. When I was in high school, there was a head shop in Ottawa that sold underground/alternative comics that Silver Snail (the mainstream comics shop down the street) never carried. Since they made most of their money off of weed paraphernalia, most of the comics would be left untouched, and I'd always find a bunch of cool, cheap shit.

This comic has an original drawing by Rege on the inside cover, and is lovingly inscribed to (NAME REDACTED). (NAME REDACTED) was one of my favourite cartoonists at the time, and I guess he sold it to to the head shop with a chunk of other books from his collection. 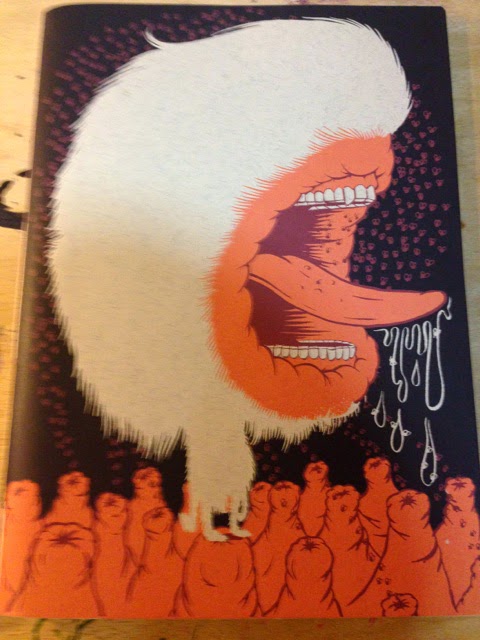 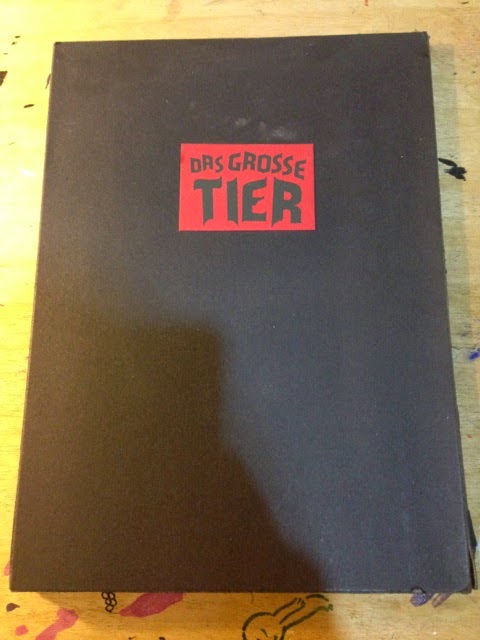 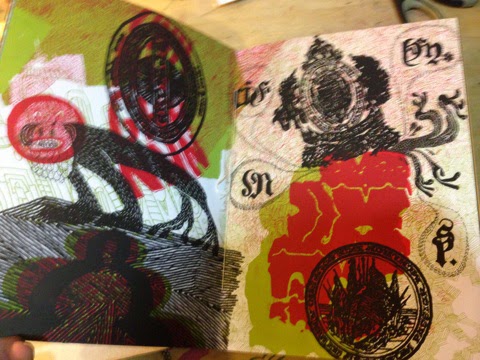 Das Grosse Tier by miscellaneous
A silkscreened anthology book by Bongout, who now produce work as Re:Surgo. I contributed some drawings to this in high school. It felt crazy to have the group put me on, since I was just some shithead kid drawing gig posters at the time. I looked up to so many of the contributors. Zeloot drew the first illustration I photographed, Seripop drew the spread. I'm not photographing the drawings I made for it, since they are terrible.'

A massive thank you to Michael for his time and participation. You can view all the previous installments of Comics Shelfie here. Next installment will be up in a fortnight.
Posted by Zainab at 13:32