Schedule's still in a state of flux, so posting when I can, but comics shelfie is still here every fortnight, this time with Sam Alden. I've written about Alden's work a few times and it's difficult to pithily sum up why so many people are excited about his work. I think the thing that makes me excited about it is the sense of passion and investment in the medium I get from him; he's unafraid to experiment from penciled comics to water colour and pixelated comics, playing around with narrative, addressing difficult, knotty subjects -and to be immensely prolific on top of all that- it's hard not to be interested. Uncivilized Books published Alden's It Never Happened Again this year, which contains the story Anime, which, along with the Haunter, is probably my current favourite comic from him (and the ones I'd recommend picking up). More on both soon, but for now, here's Sam to talk you through his comics/book collection:


'So it's important to note that I've moved around a lot in the last few years, and that constant process of sloughing off books after every move does weird things to my comics collection.  There's a handful of books that follows me everywhere, which I know that I'll actually look at in the future (off the top of my head: Tank Tankuro, Krazy Kat, Moomin, Susumu Katsumata, Chihoi, Jim Woodring, and some minis). But then my childhood bedroom in my parents’ basement is still full of boxes of like, Transmetropolitan and Rose Is Rose anthologies. Plus some books that I feel like I ought to have in my library that won't change my life anytime soon. So here are those books! Welcome to my parent's basement, everyone. 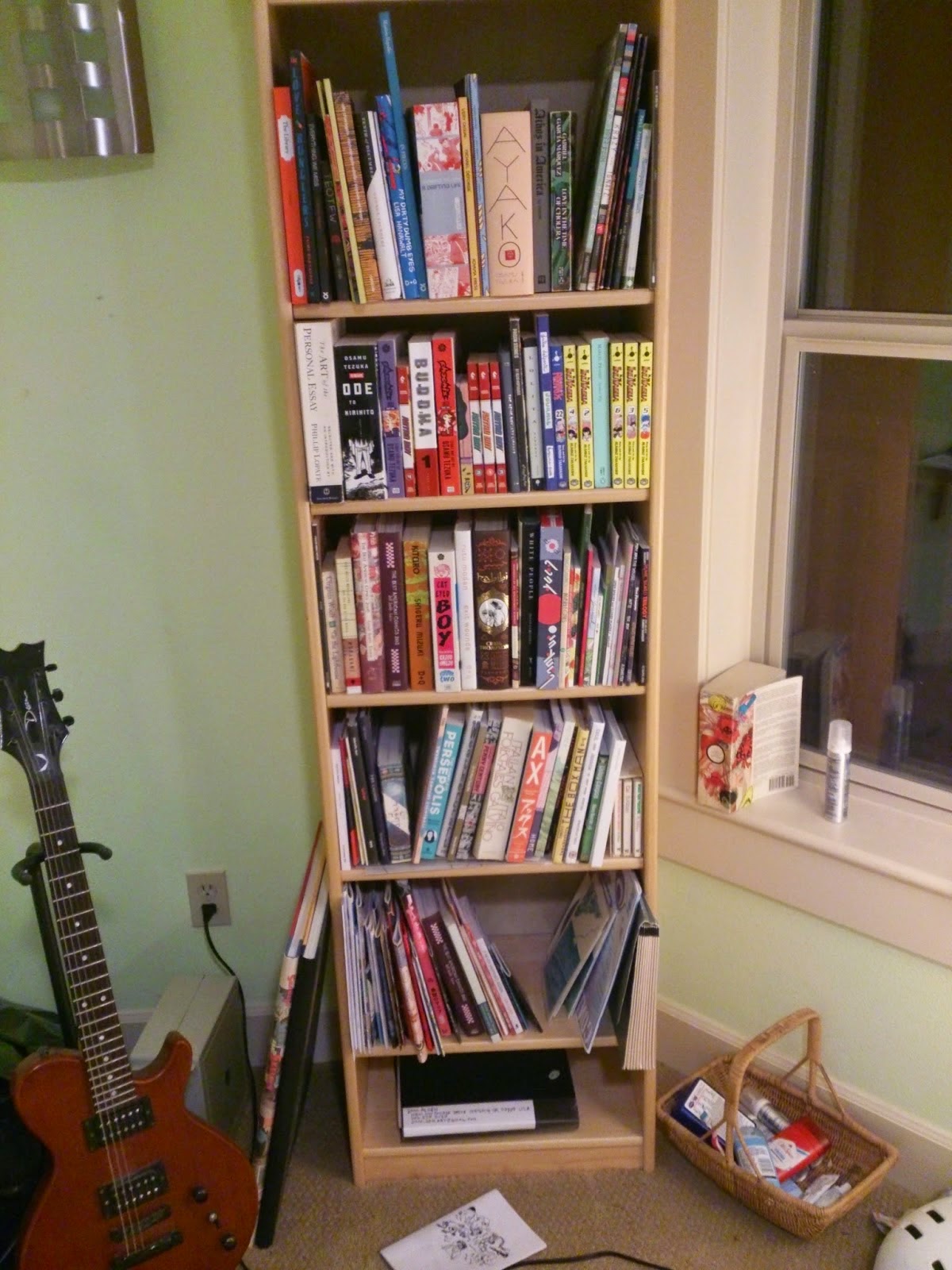 This is the aforementioned childhood room in parents’ basement, where I’m staying for this week before I move back out. This room is now this weird empty storage space for whatever detritus I accumulate elsewhere. Like, what grownup lives like this. That guitar is not mine, I don’t know what that’s doing there. Anyway, here is bookshelf 1. 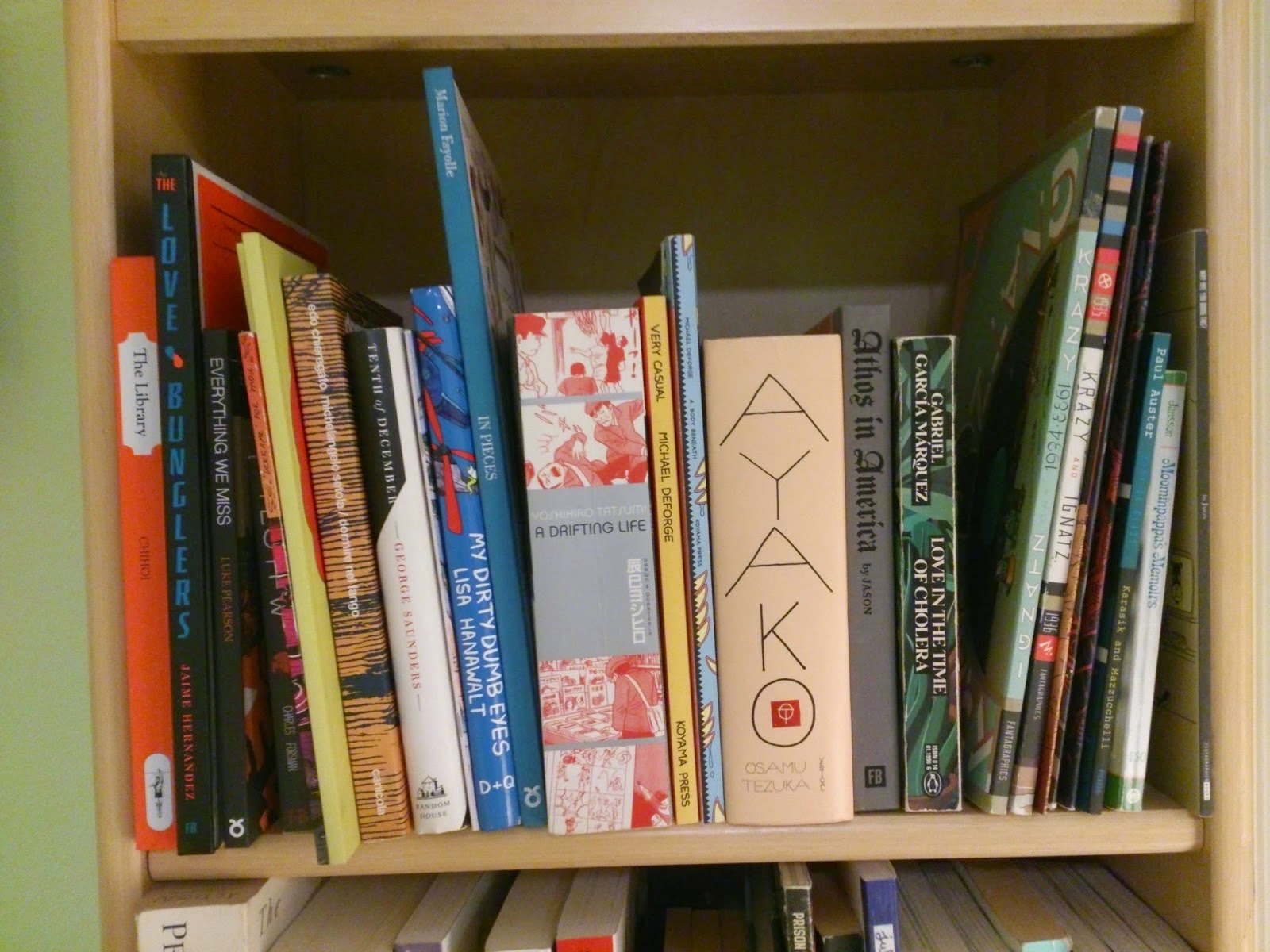 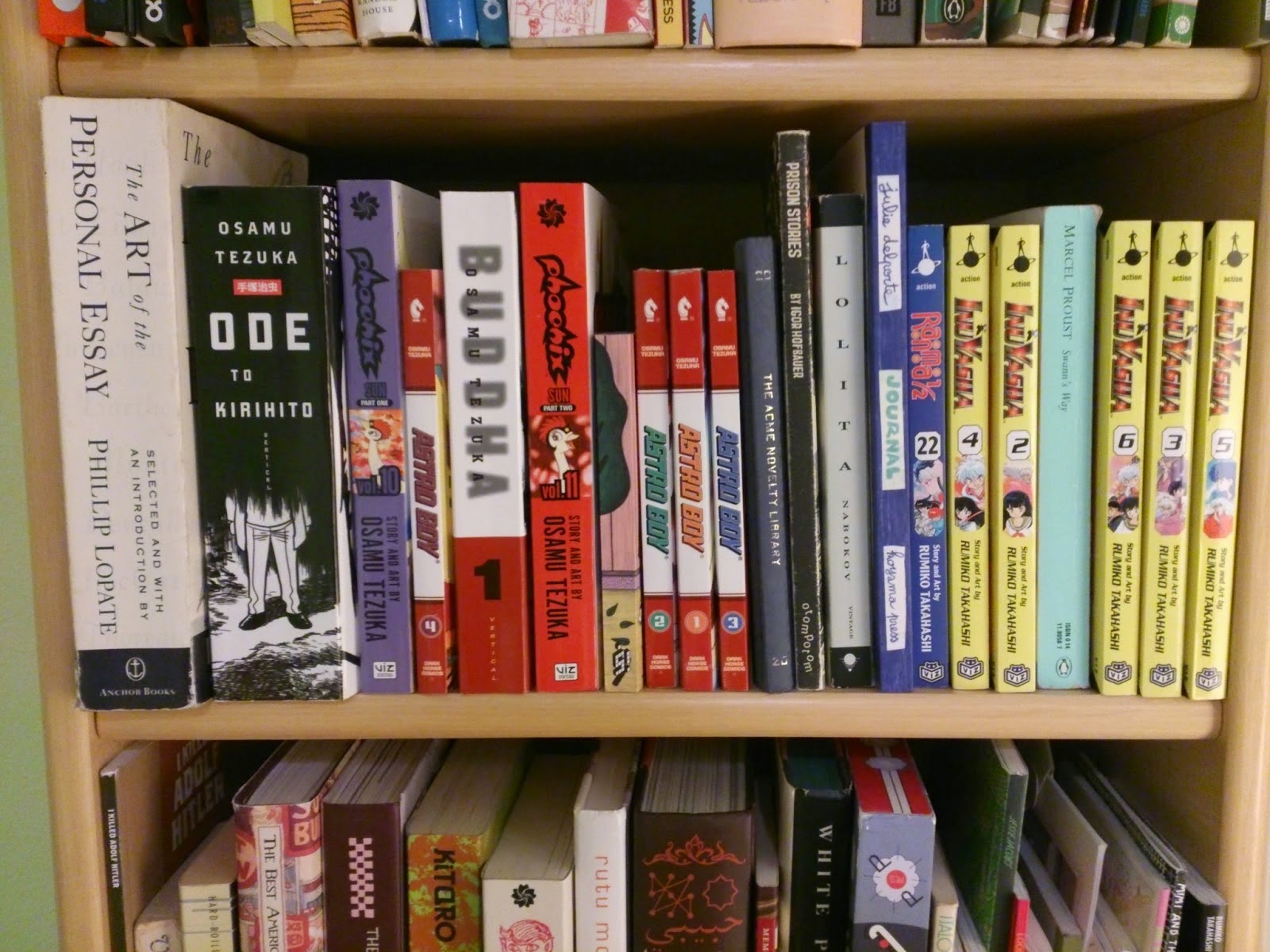 I own a lot of Tezuka because I love having big, bricky books of fast-burning manga. Some Krazy Kat up top, some DeForge books. All my Weird Heroes. And there’s Swann’s Way in between Inuyasha 2 and 6 because comics aren't just for kids etc.

Rumiko Takahashi's rad; I think I've still got a bunch of Maison Ikkoku volumes somewhere but I can't find them. We used to own this 90s mangaka interview book that featured her, and her interview was about two pages shorter than everyone else's because halfway through she was like, I'm sorry, I have to go, and then the interview ends "[Rumiko Takahasi rises and returns to her studio, where she continues working]". It was badass. 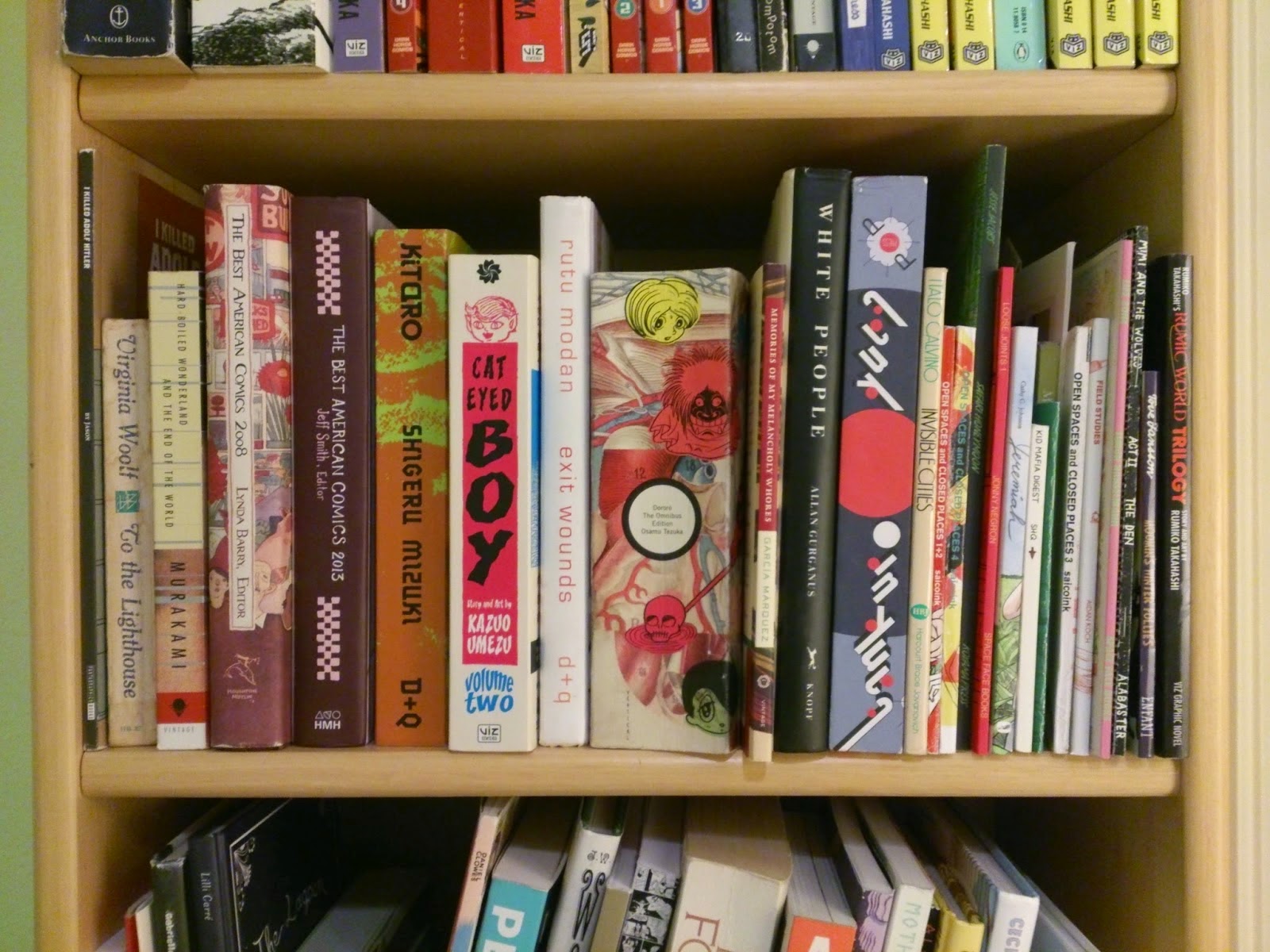 Man, yeah, a lot more manga than I knew that I owned. It accumulates so fast! I’m not cool enough to own any original Garos or obscure anthologies, I mostly just buy whatever big D+Q tome is out. I think Sophie Franz is still borrowing my Seiichi Hayashi books.

Two shoutouts on this shelf, first to Alabaster’s gorgeous allegorical comic Talamaroo– I think this predates Mimi and the Wolves by a few years. It’s still got her design-based Tove Jansson texture to everything, plus an unbelievable five-color screenprinted cover with French flaps. It's just a perfect print object. 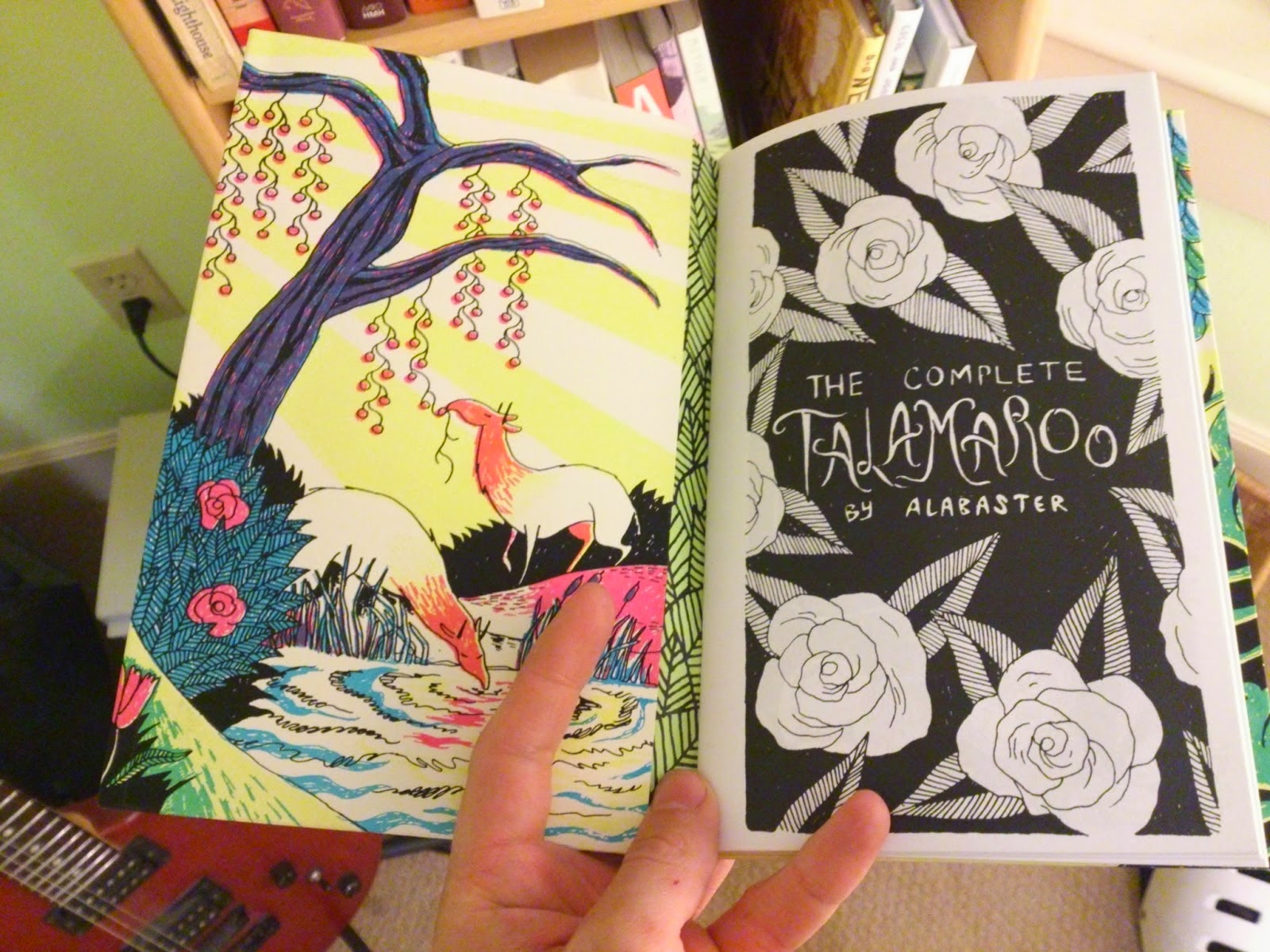 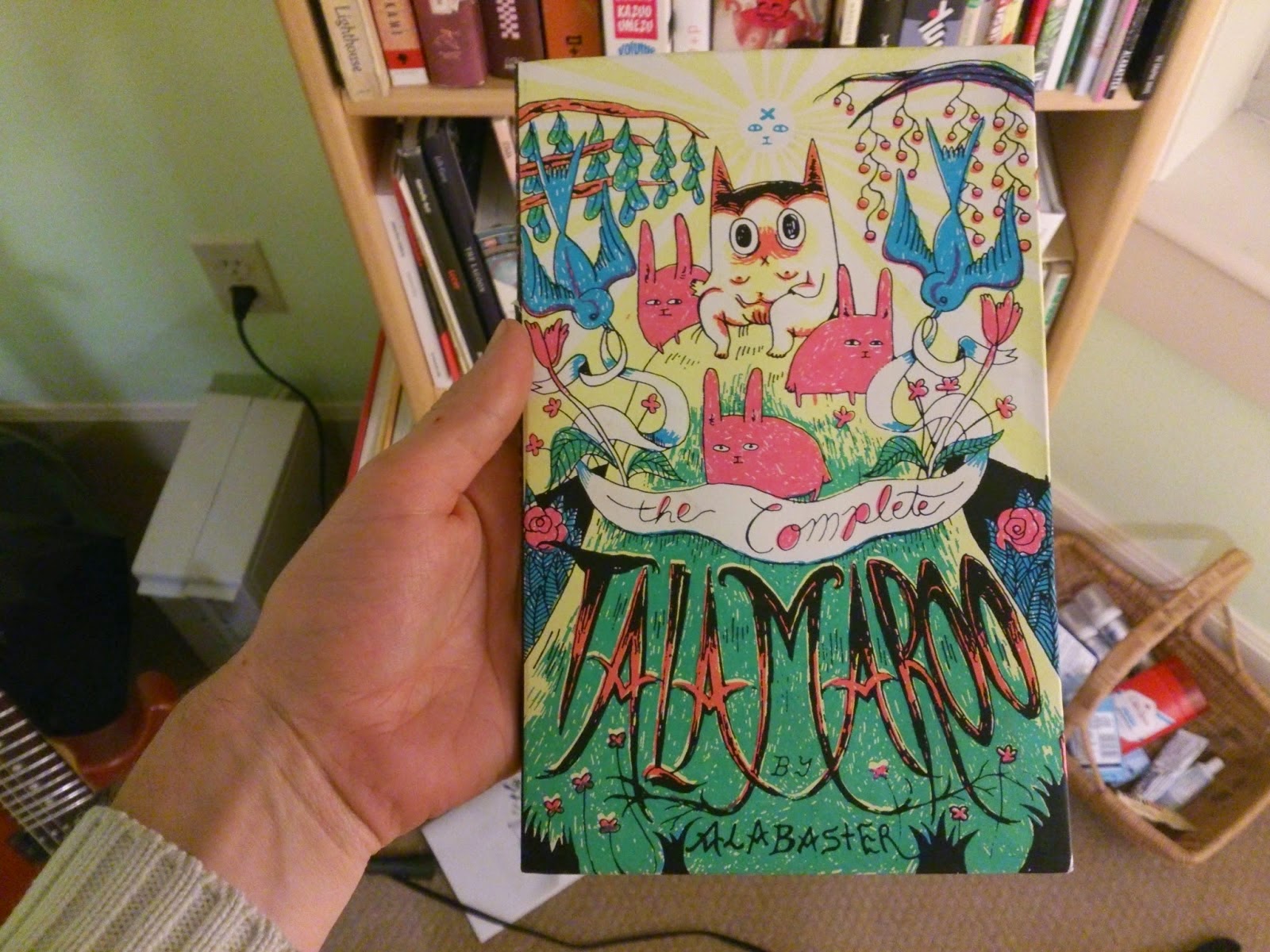 I forgot to take a photo of it but of note: I’m glad to see in other people’s shelfies that there’s usually a shelf where cartoonists keep their own books, or books they were involved in. Mine are on the bottom shelf where they belong. 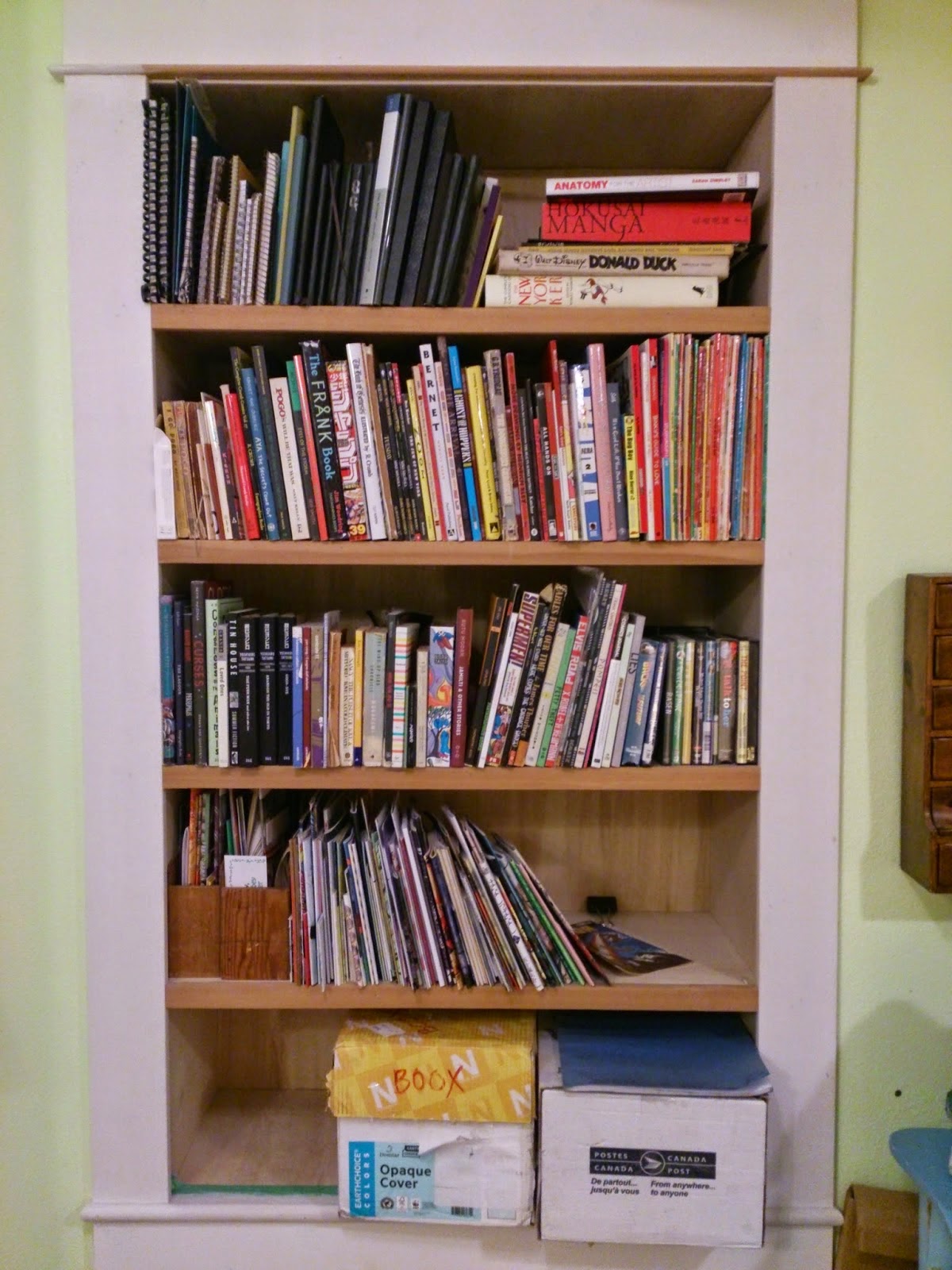 Up here are all my sketchbooks dating back to babytimes, plus some big heavy coffeetable books. The second shelf down is weird; is there even an organizing principle? On the left are a ton of ancient Pogos, and the right are all my Tintins and Asterixes, which were jointly responsible for my literacy. Also my entire Akira collection is just volume 2? My brother probably has the rest. 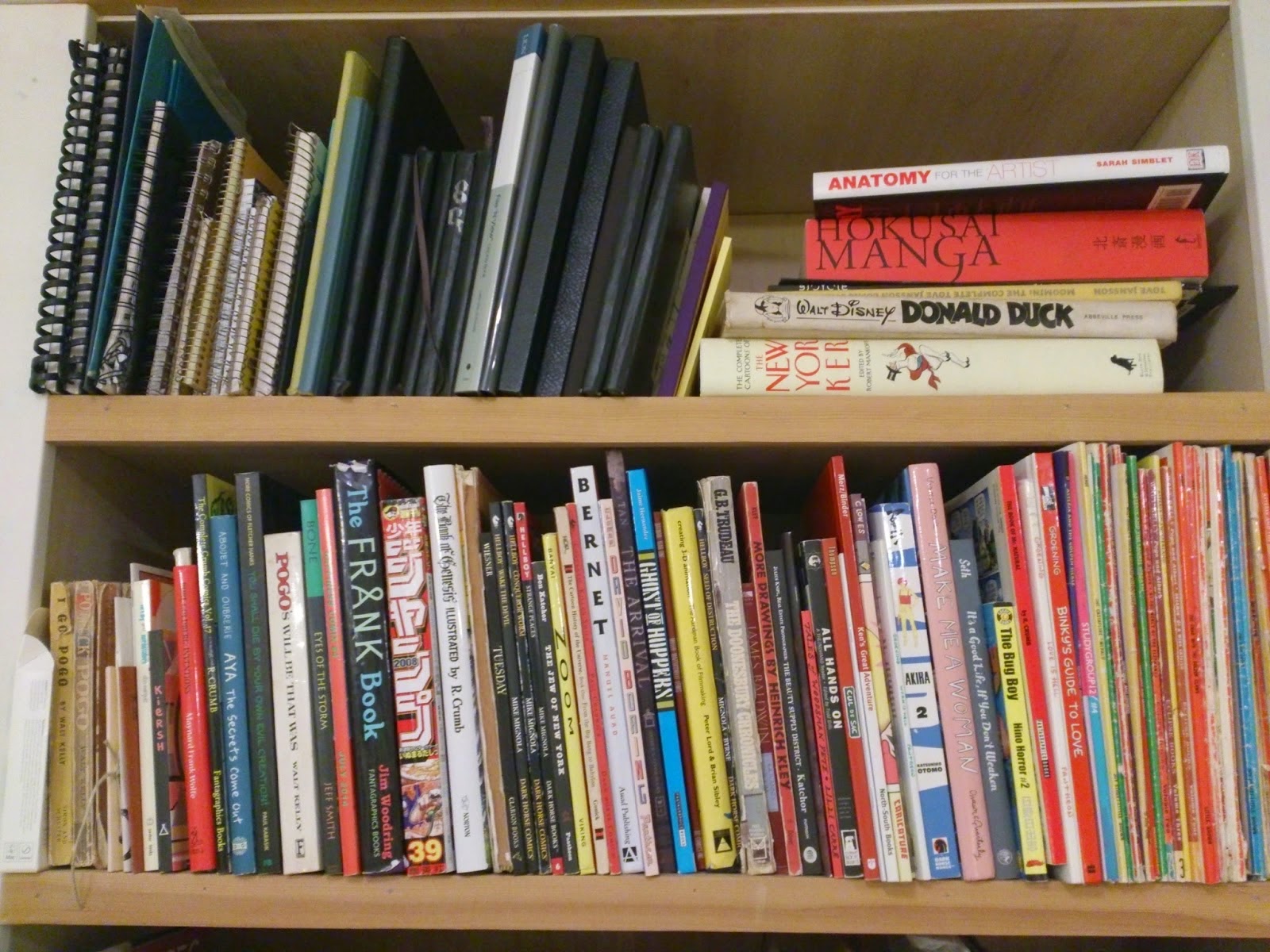 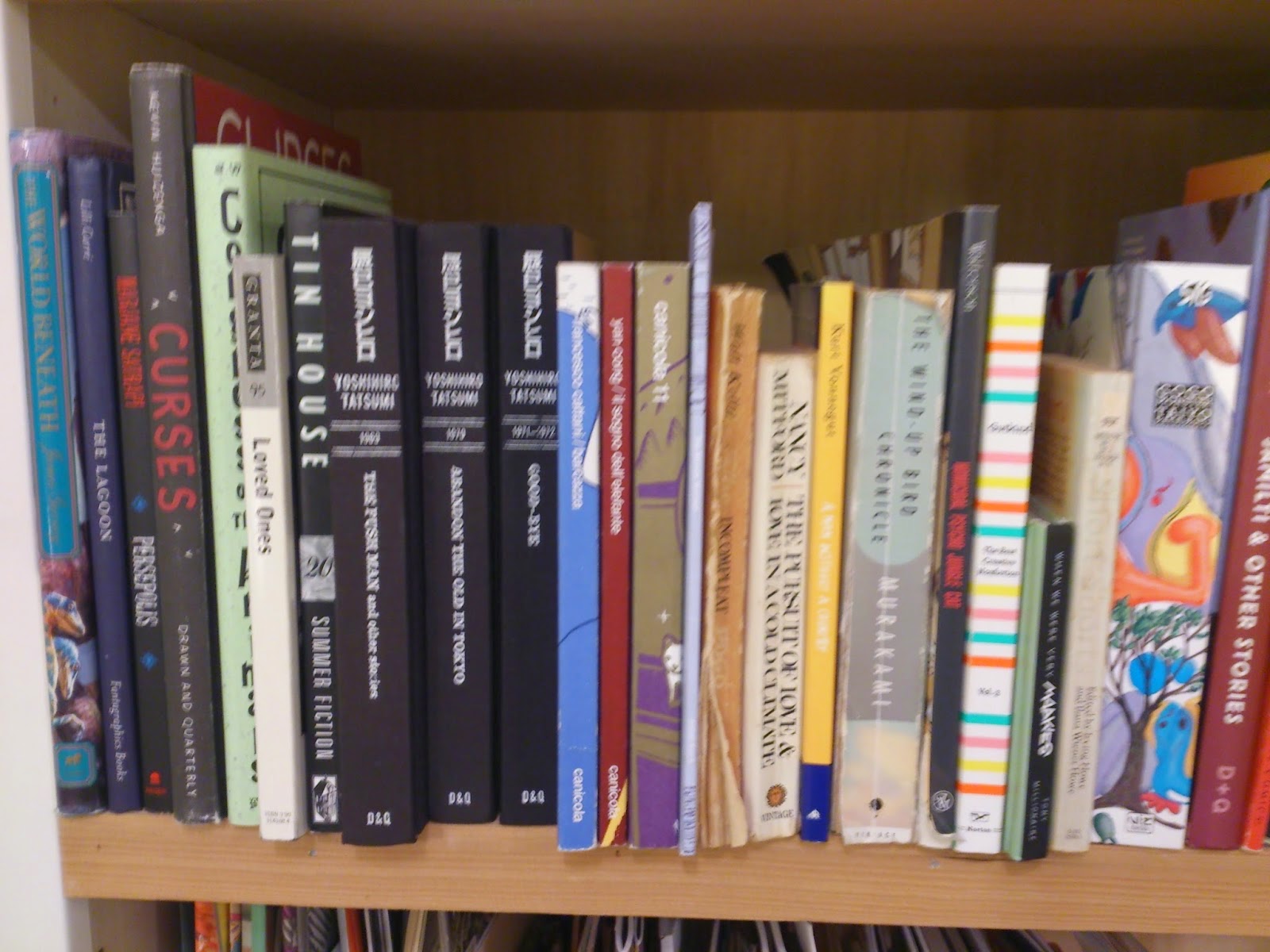 Yoshihiro Tatsumotos snuggling up with a lot of Canicola books… both of those blocks of comics were pretty formative for me. Canicola is a rad Italian publisher that I learned about at Bilbolbul; pretty much everything they put out is gold. They introduced me to Aisha Franz, Yan Cong, a bunch of Chinese authors… I dunno, it’s just really well-curated, even though I can’t actually read it without a translation sheet.

O. Horvath and Cathy Johnson sent me this gem. A lot of 80s digital wizardry and wack anatomy. Plus those colors! 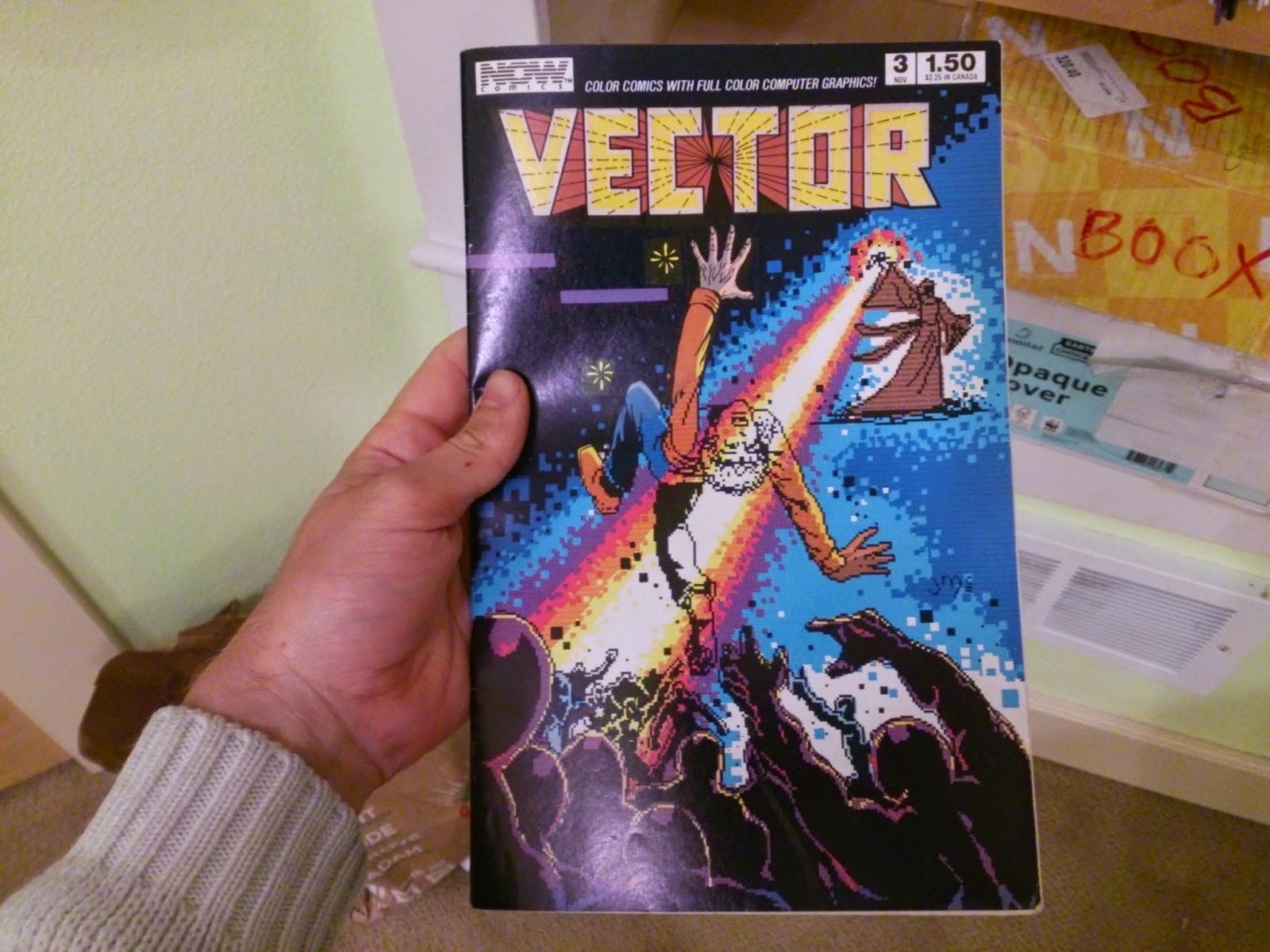 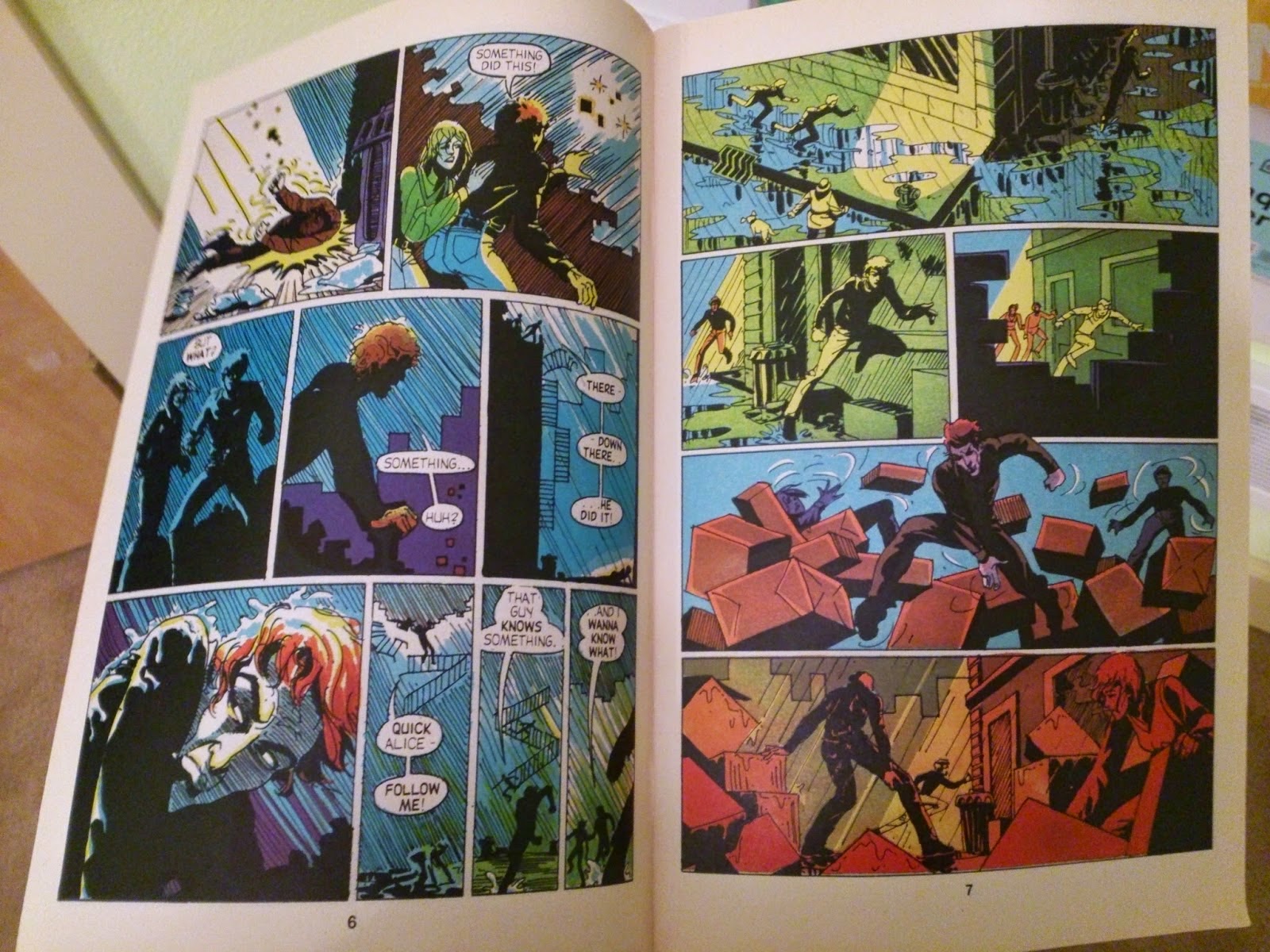 My mom grew up in England in the 70s, and this is copied from a book she had as a kid. I have no idea how they did that back then– was it, like, mimeographed? It’s an illustrated folktale about a boy hiding from giants, done with either woodblocks or pen-and-ink designed to look like woodblocks. This drawing of the people in the giant lizard is one of those foundational images that’s been lurking in my visual vocabulary  for as long as I can remember. 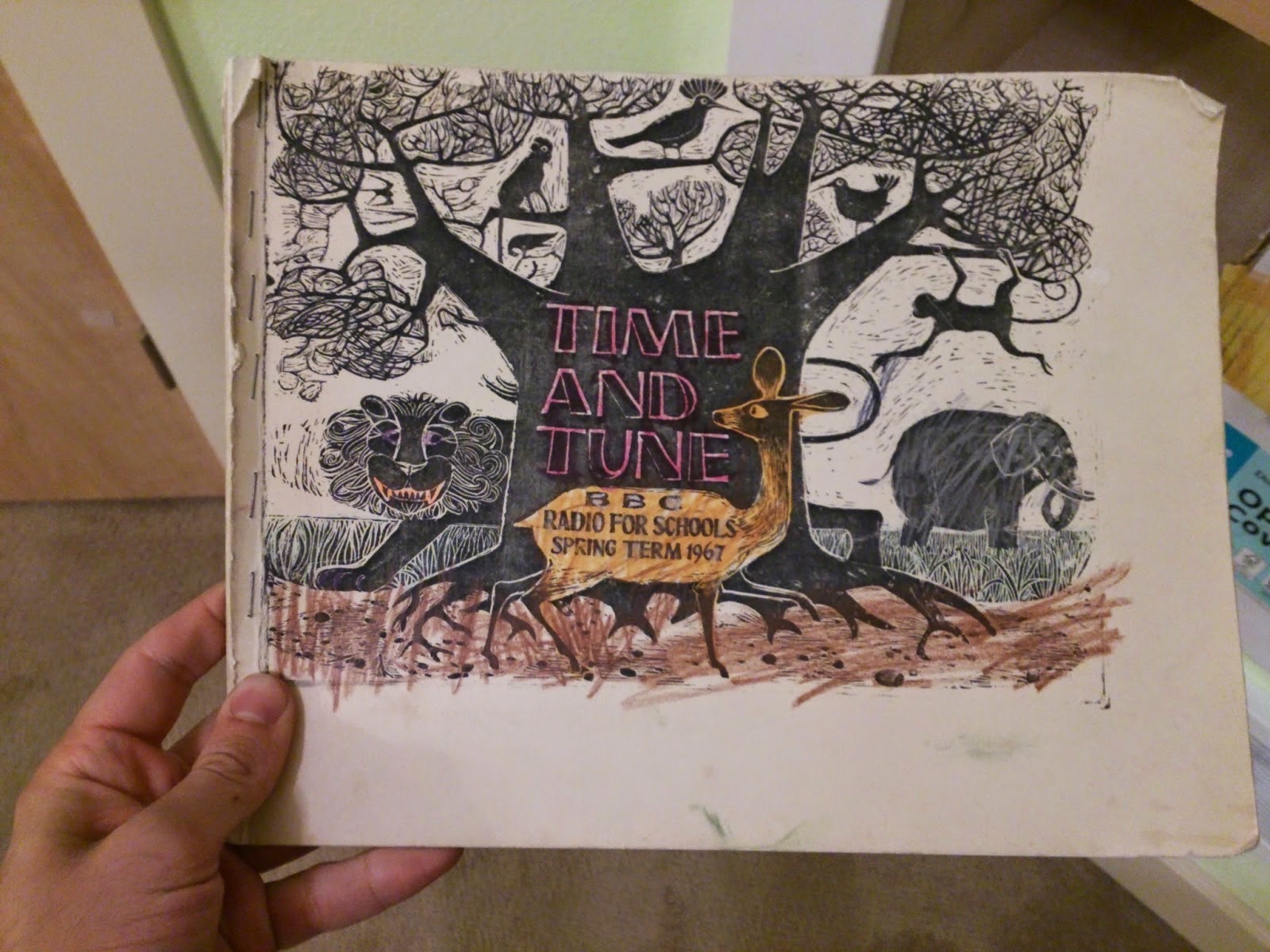 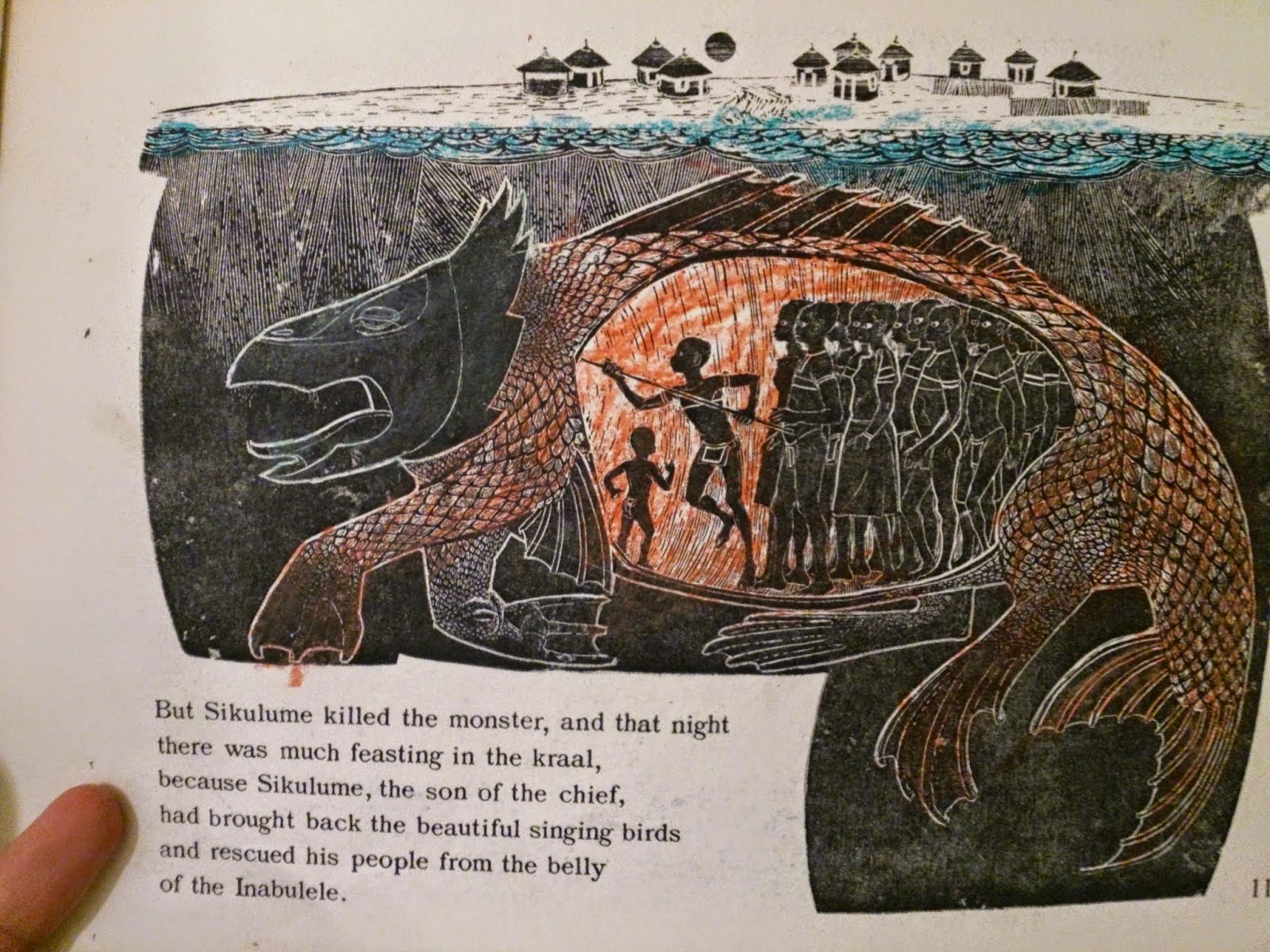 And just to be thorough and show you how rarely my books ever actually end up on a shelf, here is my closet, where most of my books are: 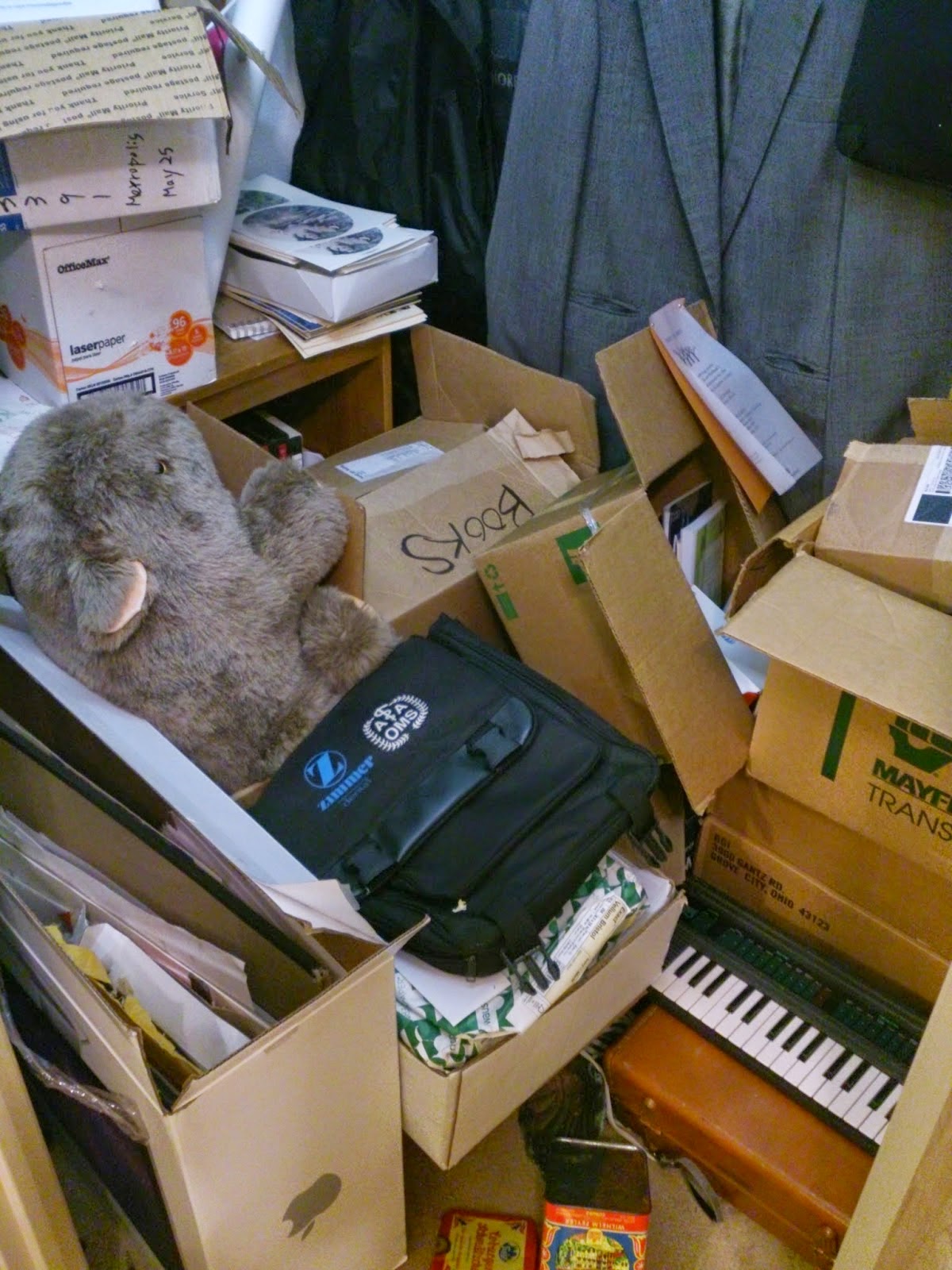 I don’t even remember what’s in these things; most of these are books from two years ago. Yup, there’s that Contemporary Chinese Literature anthology I’ve been looking for. 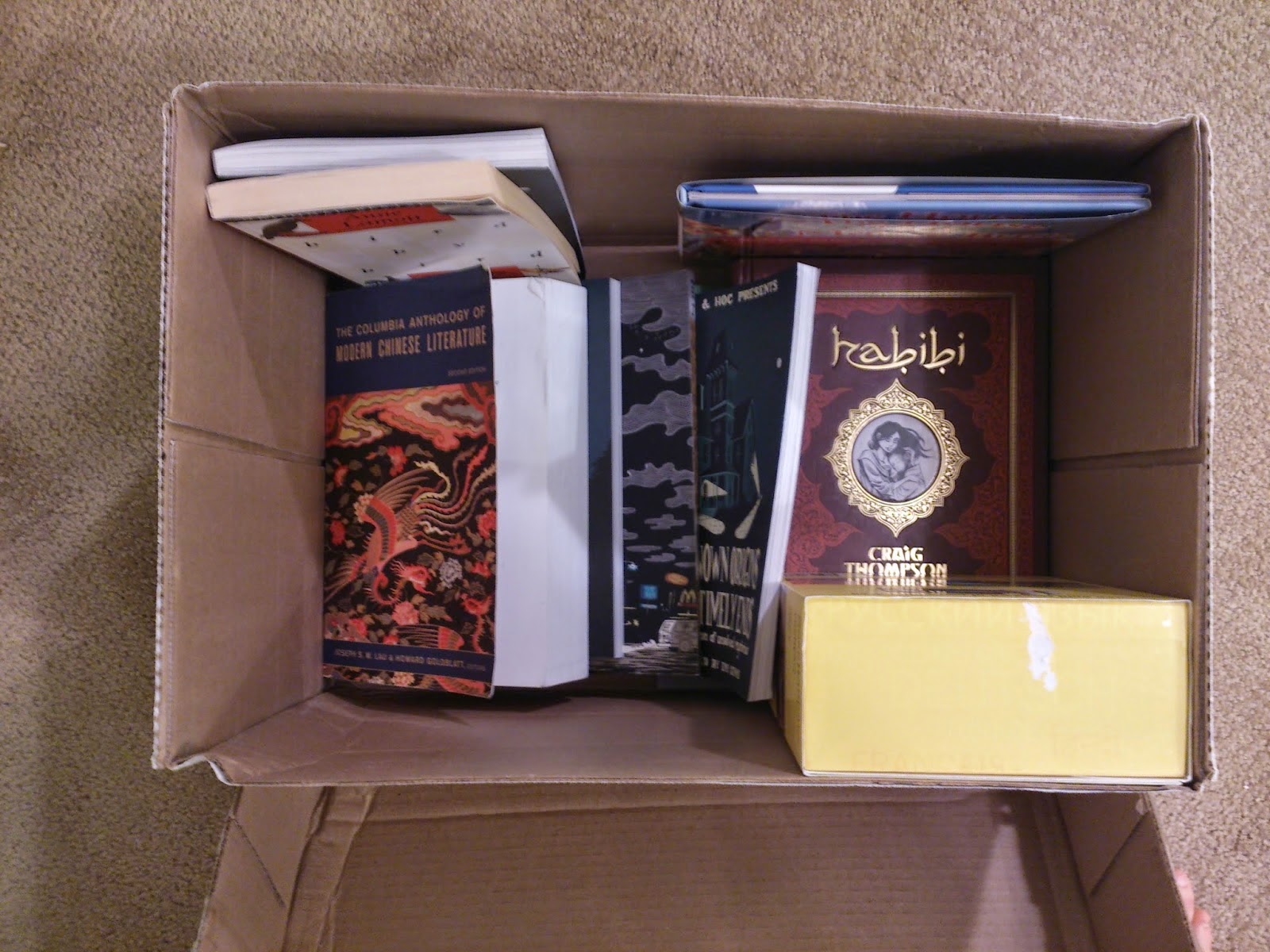 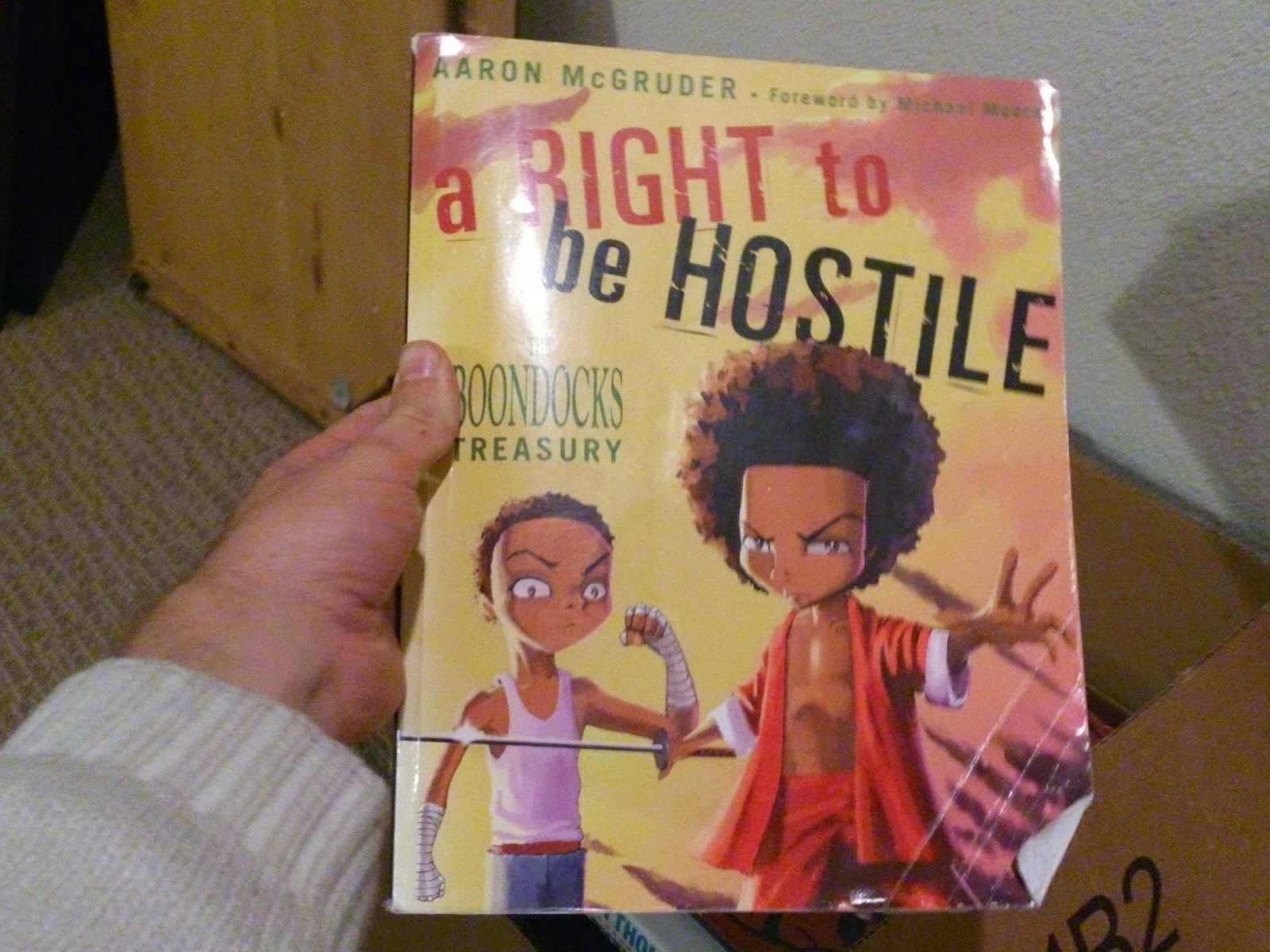 Remember the Boondocks? Me too. Okay, that’s probably it, there’s my shelfie.'

A massive thank you to Sam for his time and participation. You can view all the previous installments of Comics Shelfie here. Next installment will be up in a fortnight.
Posted by Zainab at 10:08