Continuing a (very loose) series of posts looking at book design, this time at the actual hard-back covers of dust-jacketed books (rather than the actual dust-jackets themselves- that's for another day). Prior to deciding to focus on this aspect, I'd wanted to do a piece looking at book-spines, but came up short, despite owning almost 1000 comic-books (and I mean books, not floppy issues) now- most simply have the title and/or author in a particular font, with perhaps a small image -often a partial of the cover illustration-placed at the bottom; not really much innovation going on there. There's somewhat of a better effort made with jacketed hardback books covers- there isn't really a separate term for the cover underneath (that I know of), but there should be!

Ostensibly, you have the same options available -spot gloss/laminate/emboss/deboss/cloth binding (like these sweet Batman covers) etc.- that you would with any non-jacketed hardback book cover, but the tendency is to favour designs that are smaller, more subtle, minimal, and less expensive. Which is understandable on a level, because the jacket is rarely going to come off, but to my mind, the jacket acts a protector for the book and its 'real' cover, so an effort should be made with what it conceals. Below, I've put together various examples, showing books with and without their jackets, and looking as what makes both good and bad 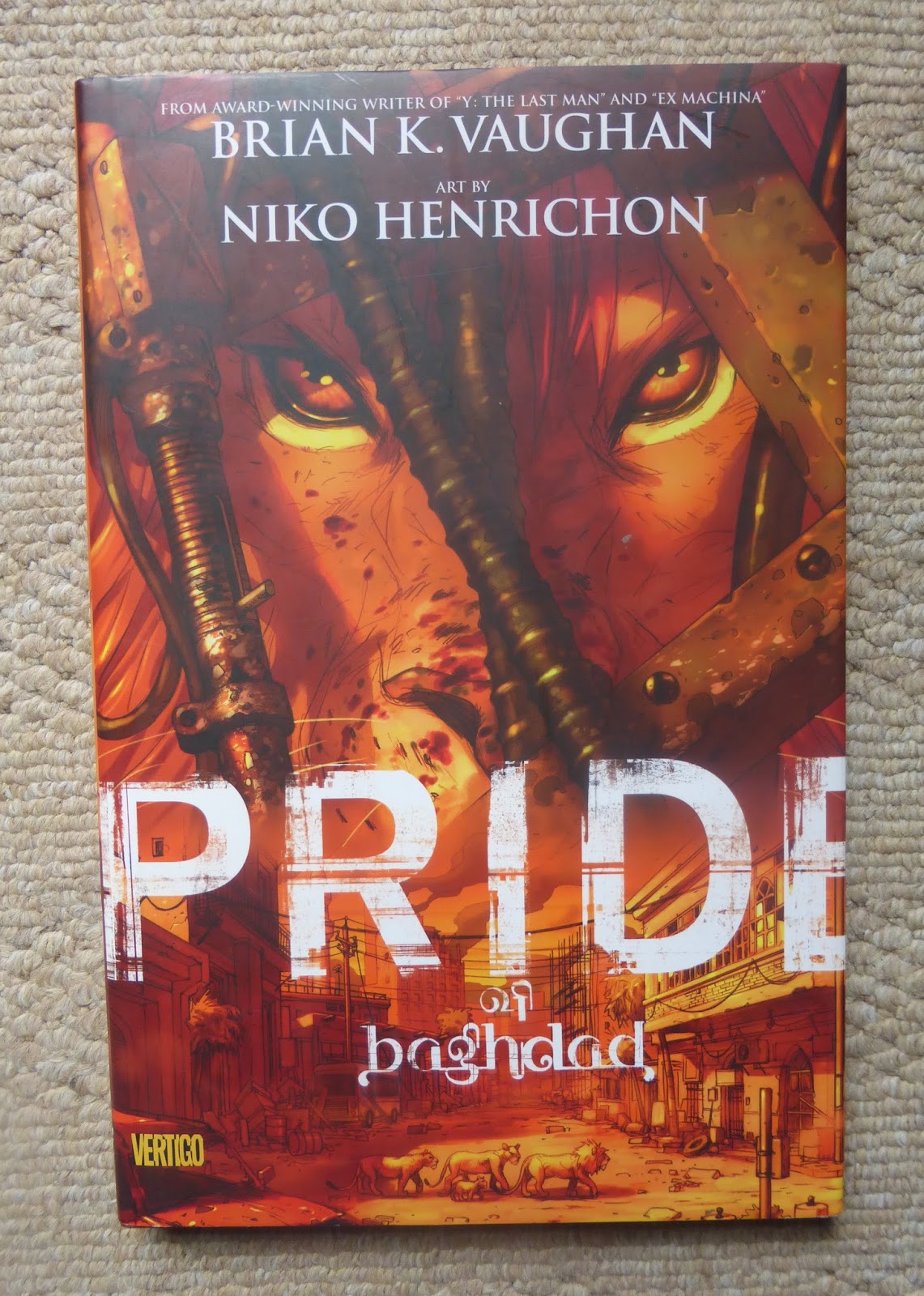 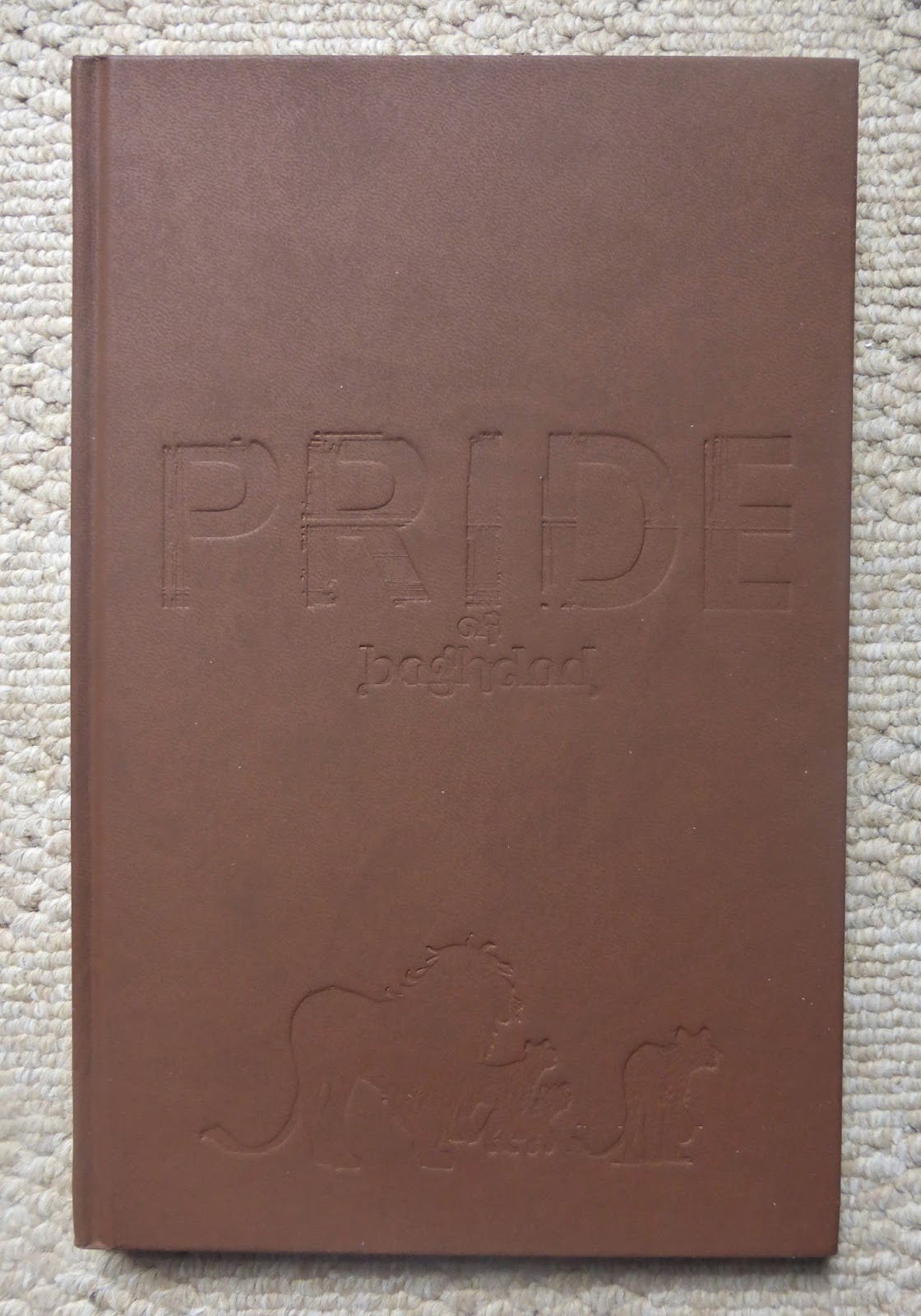 Pride of Baghdad by Brian K Vaughan and Niko Henrichon: I like this- the brown earthiness of it, the simplicity of the deboss (only recently learned that emboss is raised, deboss is impressed). I like that the stylised 'Pride of Baghdad' font has been carried over, so you have that connection between the two covers, but moved to an upper central position, making room for the softer pride of lions below it, and bringing both elements together. A spot gloss/laminate, or foil wouldn't have fit here- too flashy, and not really in keeping with the subject at hand, so a blind deboss is a good choice, with the addition of the lions giving it a point of visual appeal. 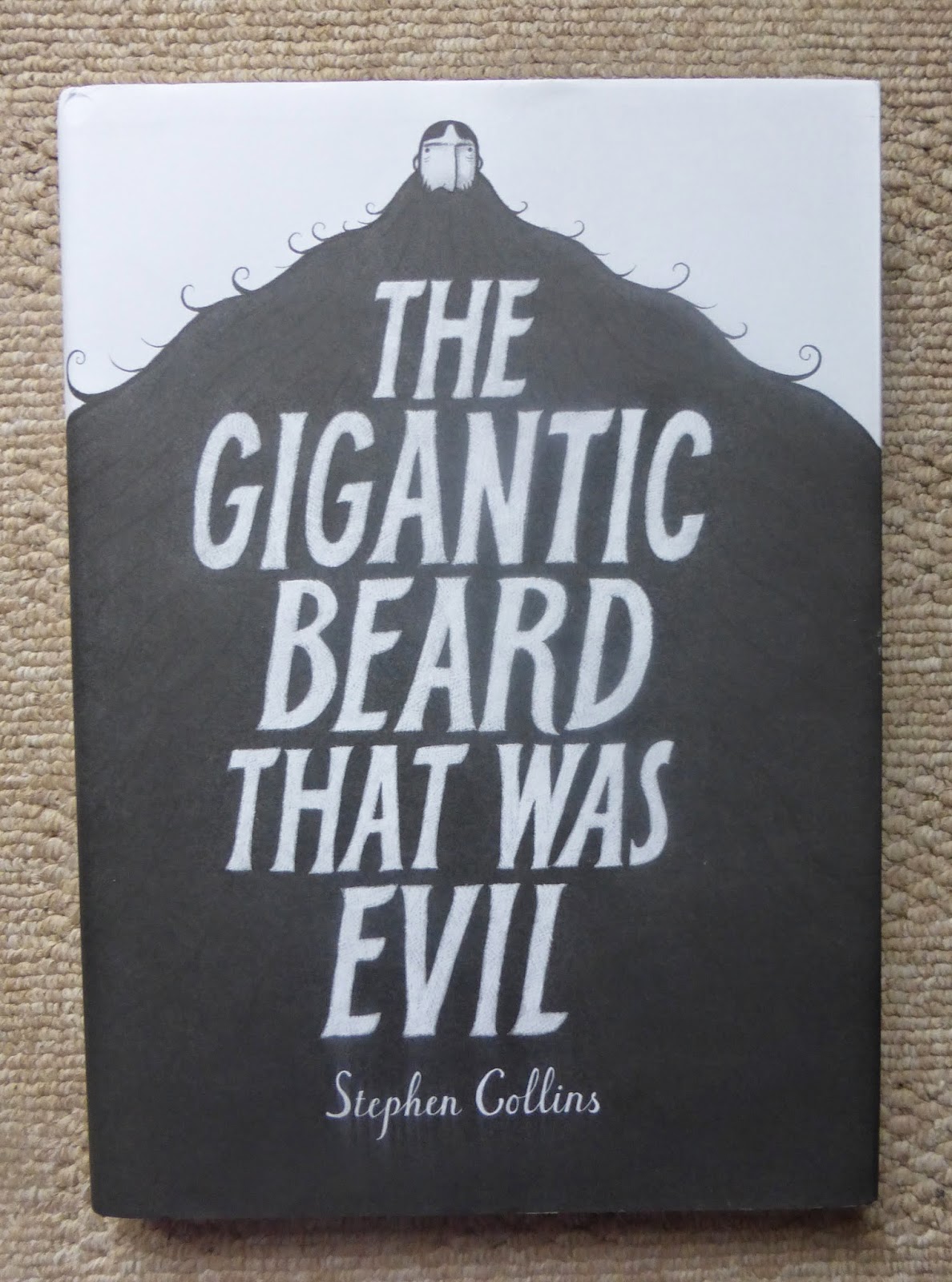 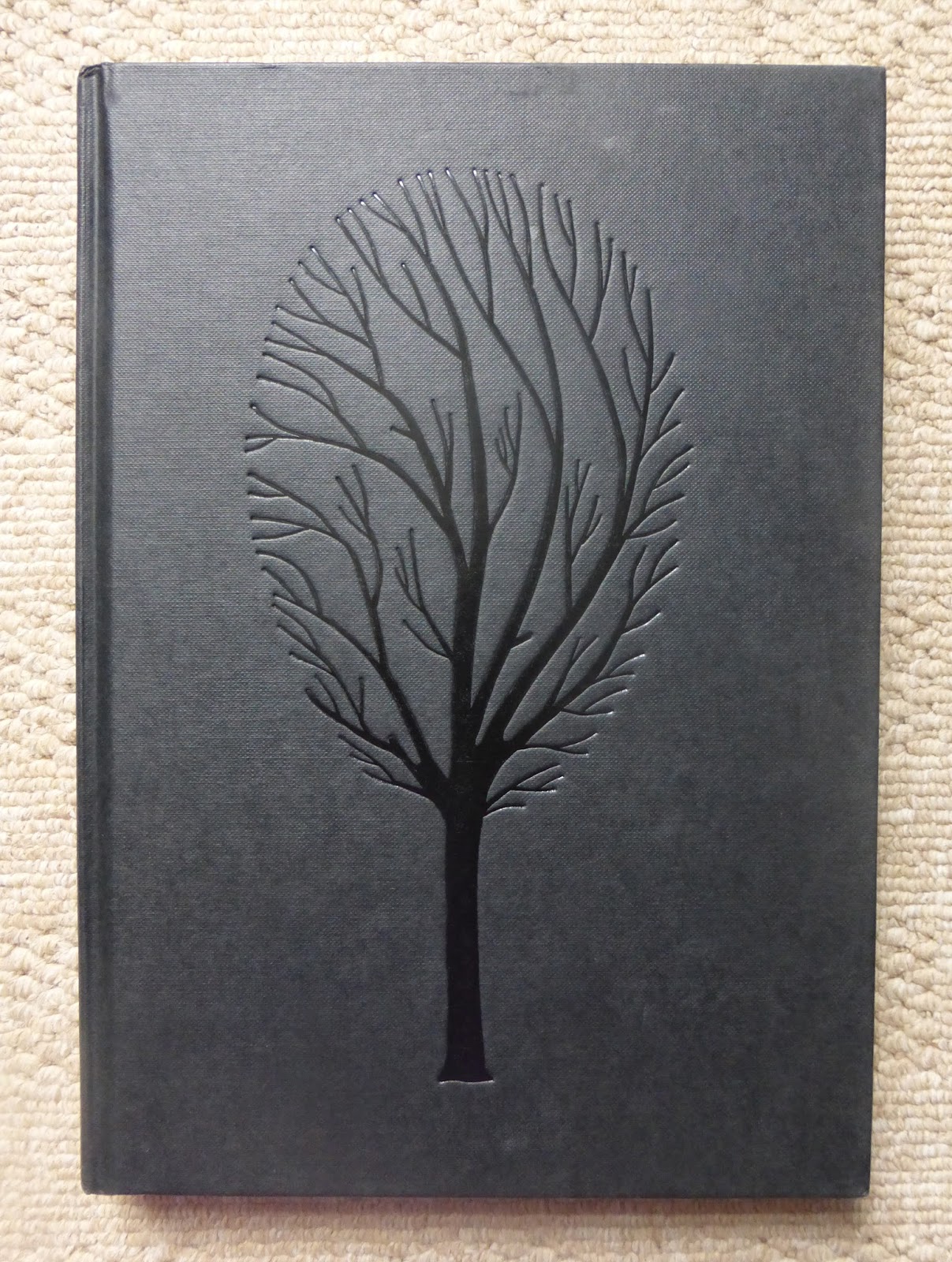 The Gigantic Beard by Stephen Collins: Simple, but effective. I know it's only a tree, but the size: taking up almost all the A4 cover, and central positioning, along with the black glossy deboss make it just about intriguing enough to hold the attention. The tree mirrors the growth/life theme, but its also doesn't give anything away- a lot of jacketed hardbacks lost title and author credits when it comes to the actual cover (usually reserved to the spine), and the very precise oval shape adds another dimension of interest. This maybe loses some of it's effect in photographs- there's something more imposing in holding a large black hardback book in your hands. 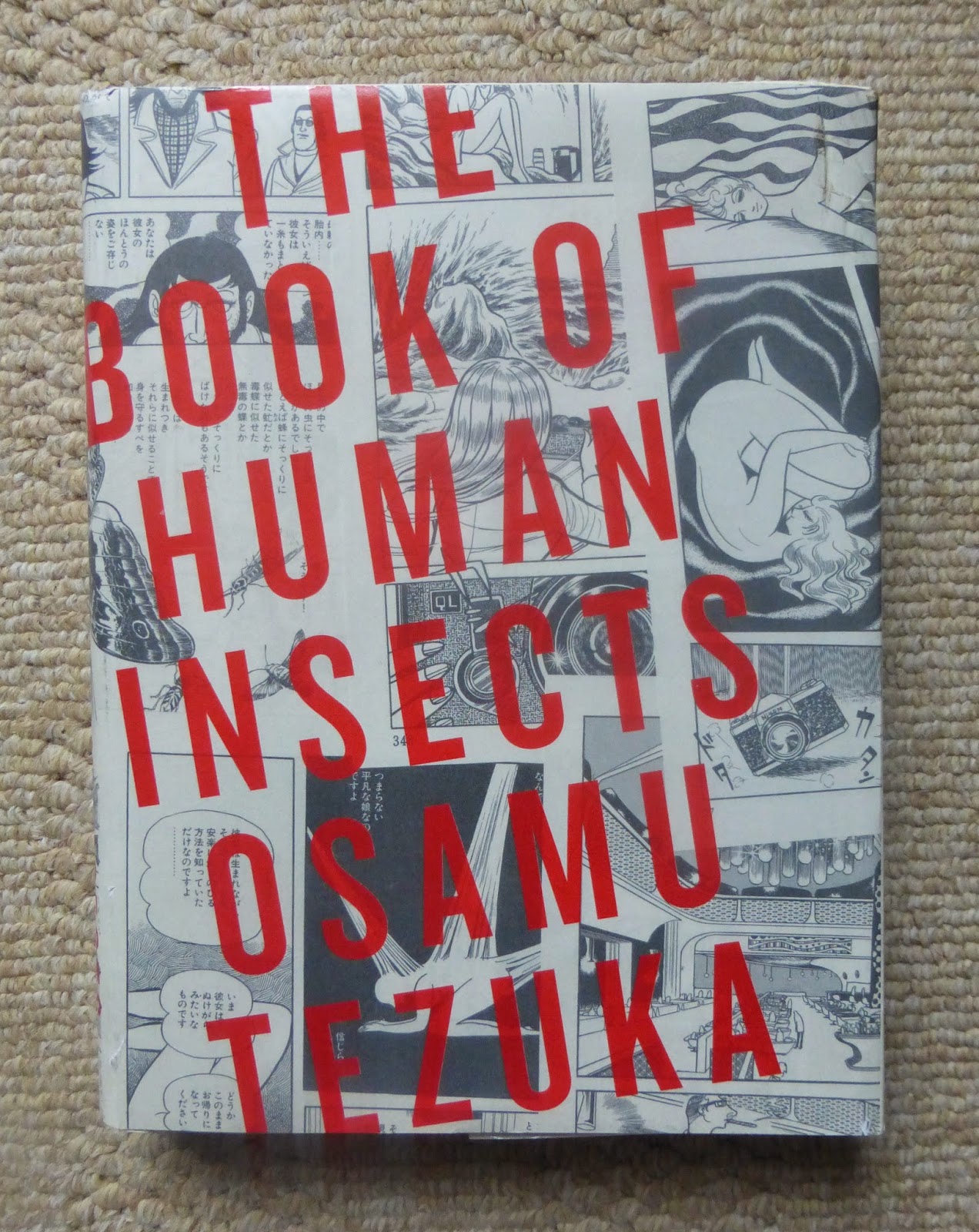 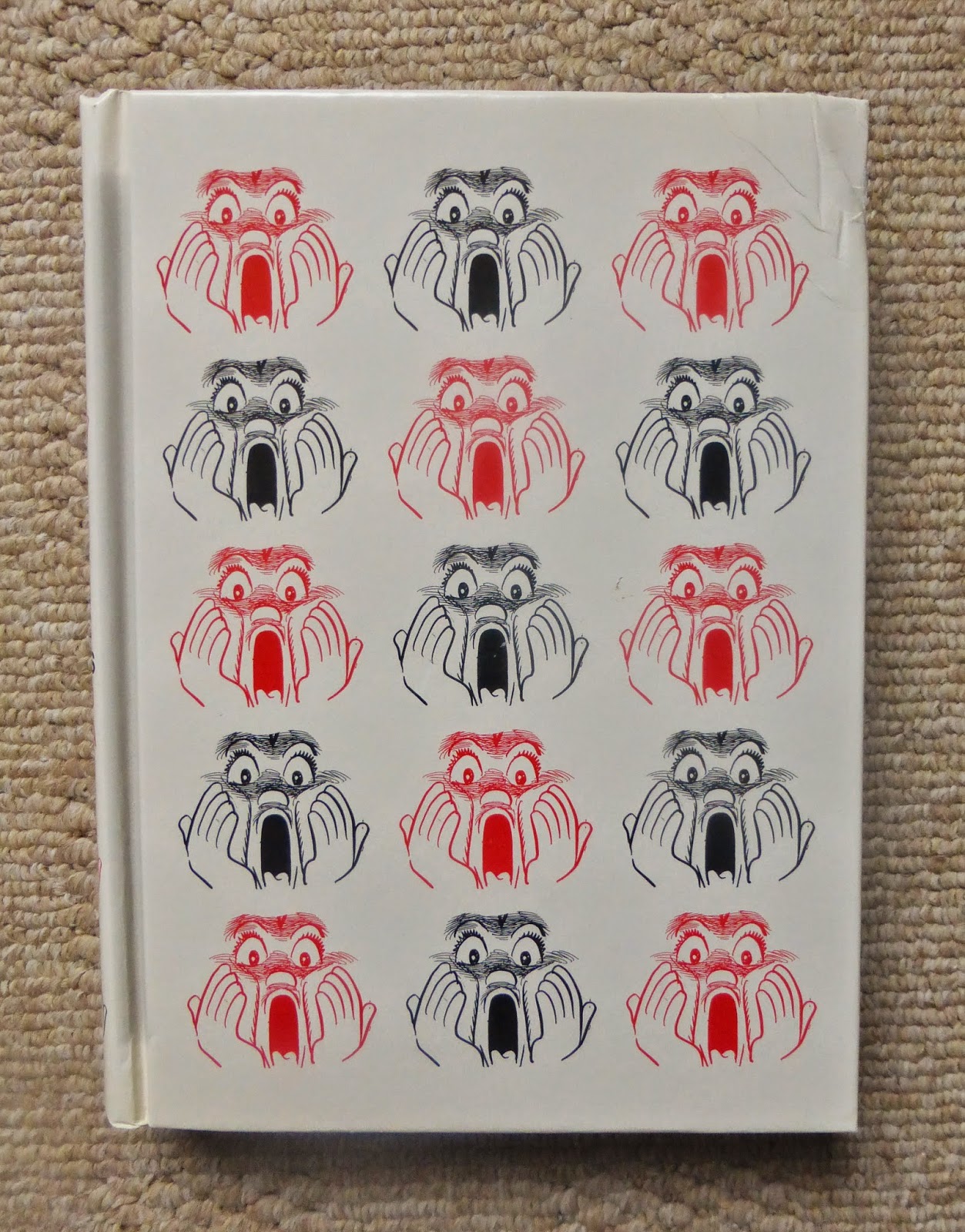 The Book of Human Insects by Osamu Tezuka: This is probably one of my favourites, because the jacket design, while incredibly effective in its own right with those tall, bold red letters emblazoned  at an angle over the newsprint collage of images, is totally different to what's underneath, and someone's taken the opportunity to come up with a cover that's thematically unifying and incredibly striking in its own right. The expression of the horrified face (taken from the comic) is pretty great: the horrified eyes, the hands pushing the cheeks upwards, the gaping mouth, but isolating it to create a black and red repeat pattern is what makes it excellent. The use of the red, the only pop of colour- but strong enough that it's the only one that's needed, is what sets off both covers; imbuing them with connotation (the images on either cover, in association with the red bring to mind certain situations and ominous events) and visual strength. 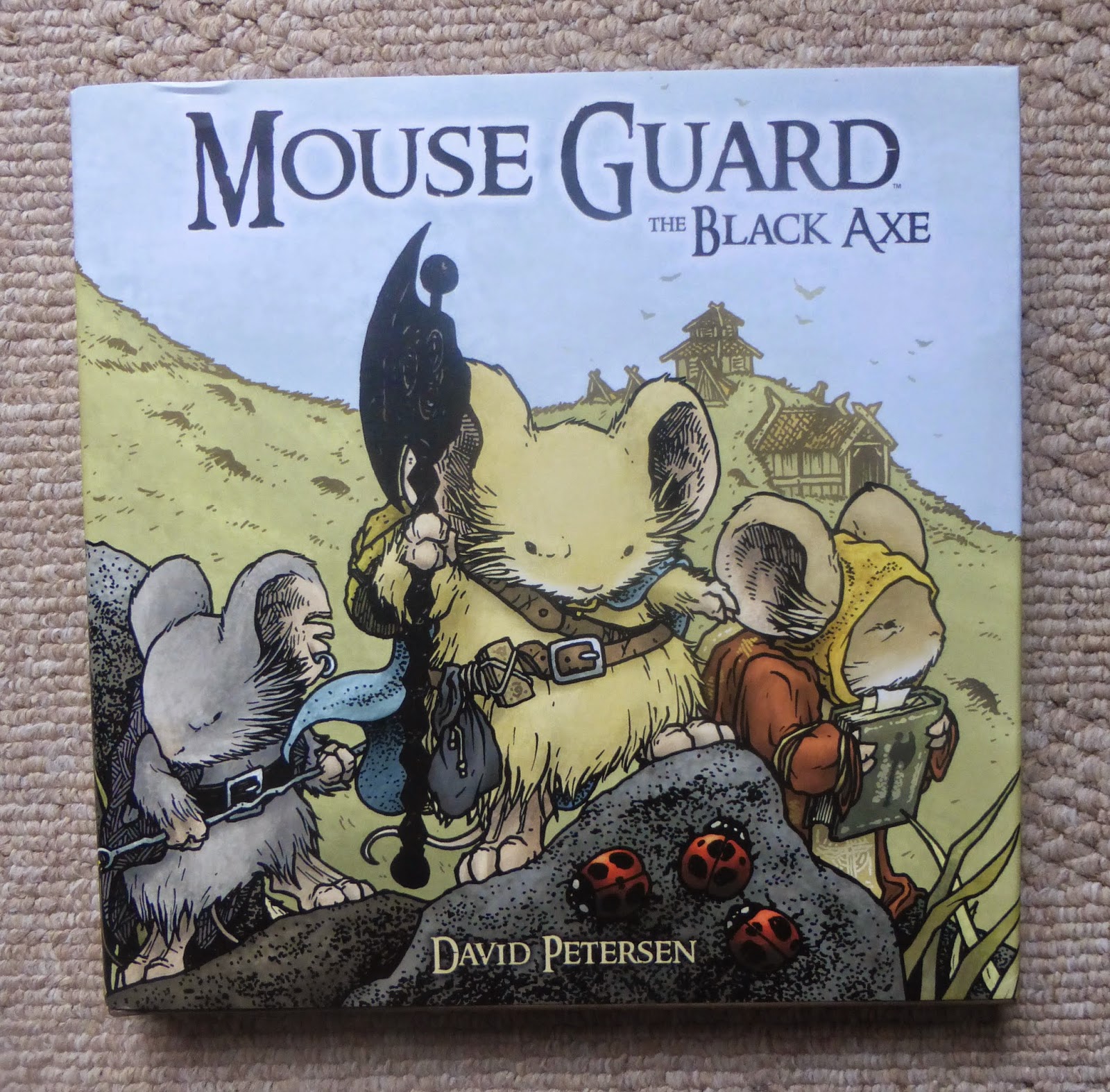 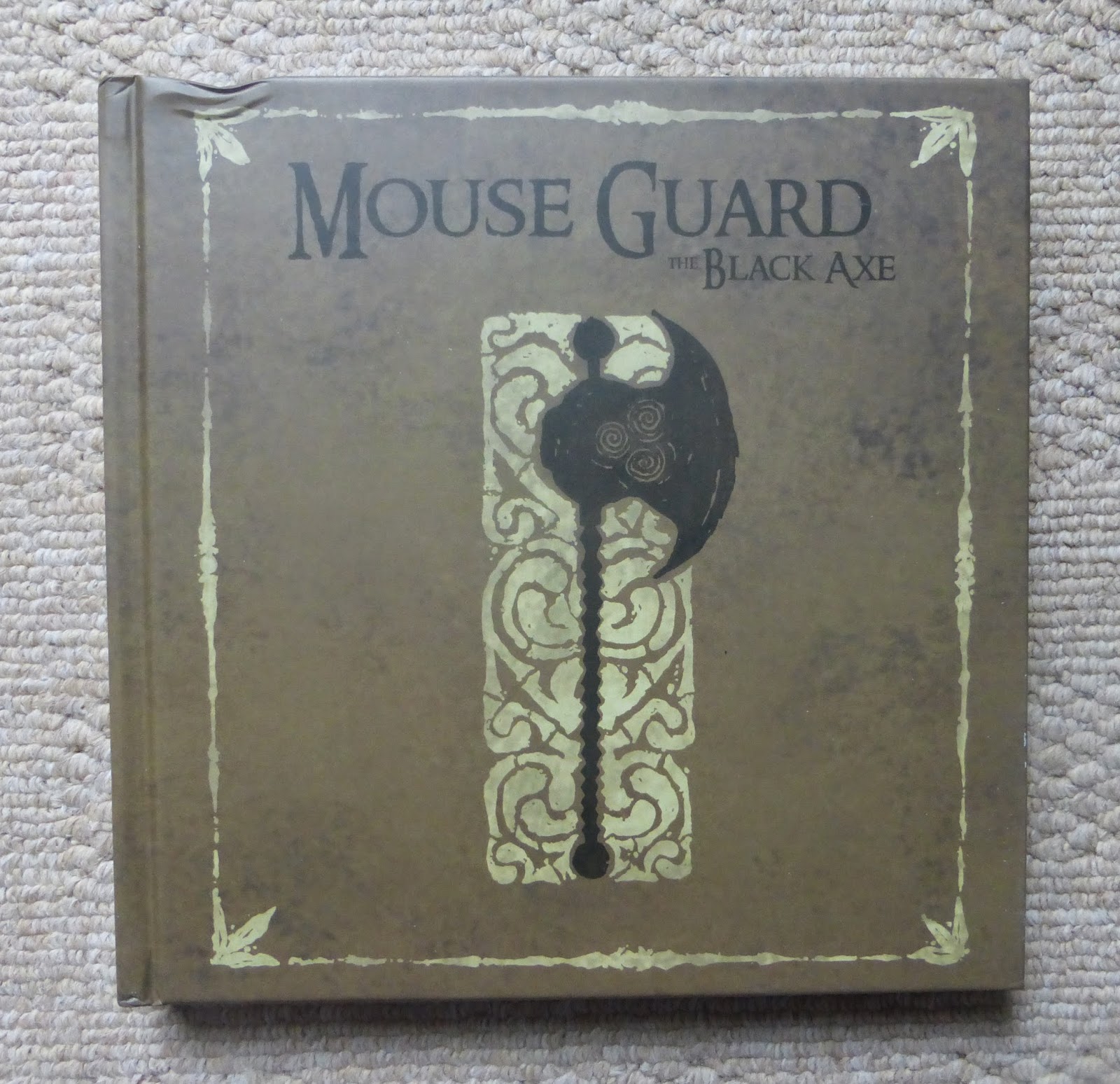 Mouse Guard: the Black Axe by David Petersen: I think this is a poor cover- muddy and boring. I can see what it's going for: a sort of olde epic feel, with the axe being an object of significance placed emphatically in the middle, but the mint/yellow border is nondescript and doesn't do enough to frame, the pattern behind the axe is rather bland. The eye should be drawn to particular points of focus, but here they skim over the whole thing, not resting on any aspect. This is a good example of a hardback cover that could be vastly improved by either a metallic foil- imagine some gold or silver emboss picking out that border and pattern instead of the lighter green- much more arresting, whilst still retaining the mythic tome feel. Love the dust-jacket cover though; there's not much that David Petersen's illustrations can't improve. 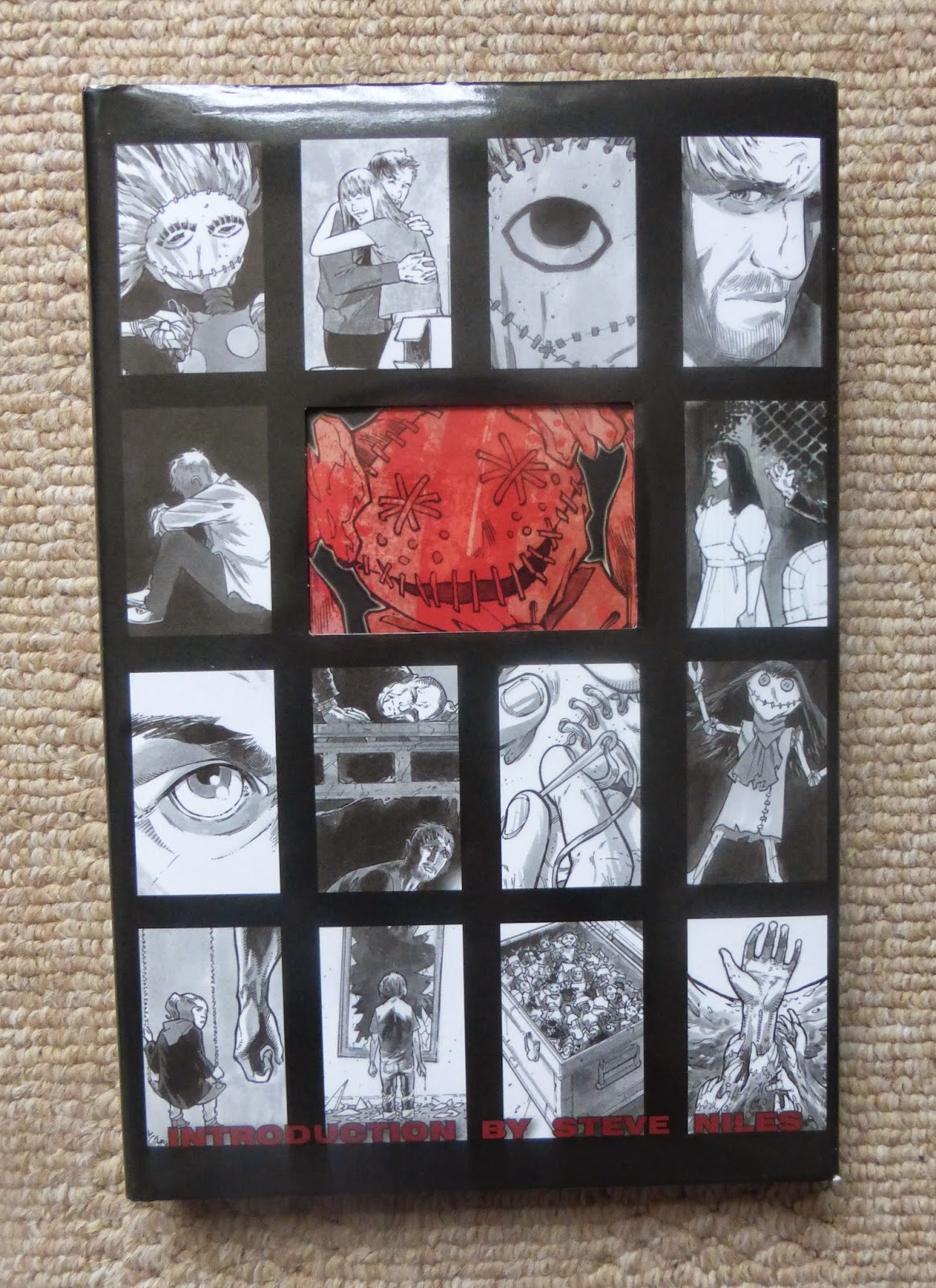 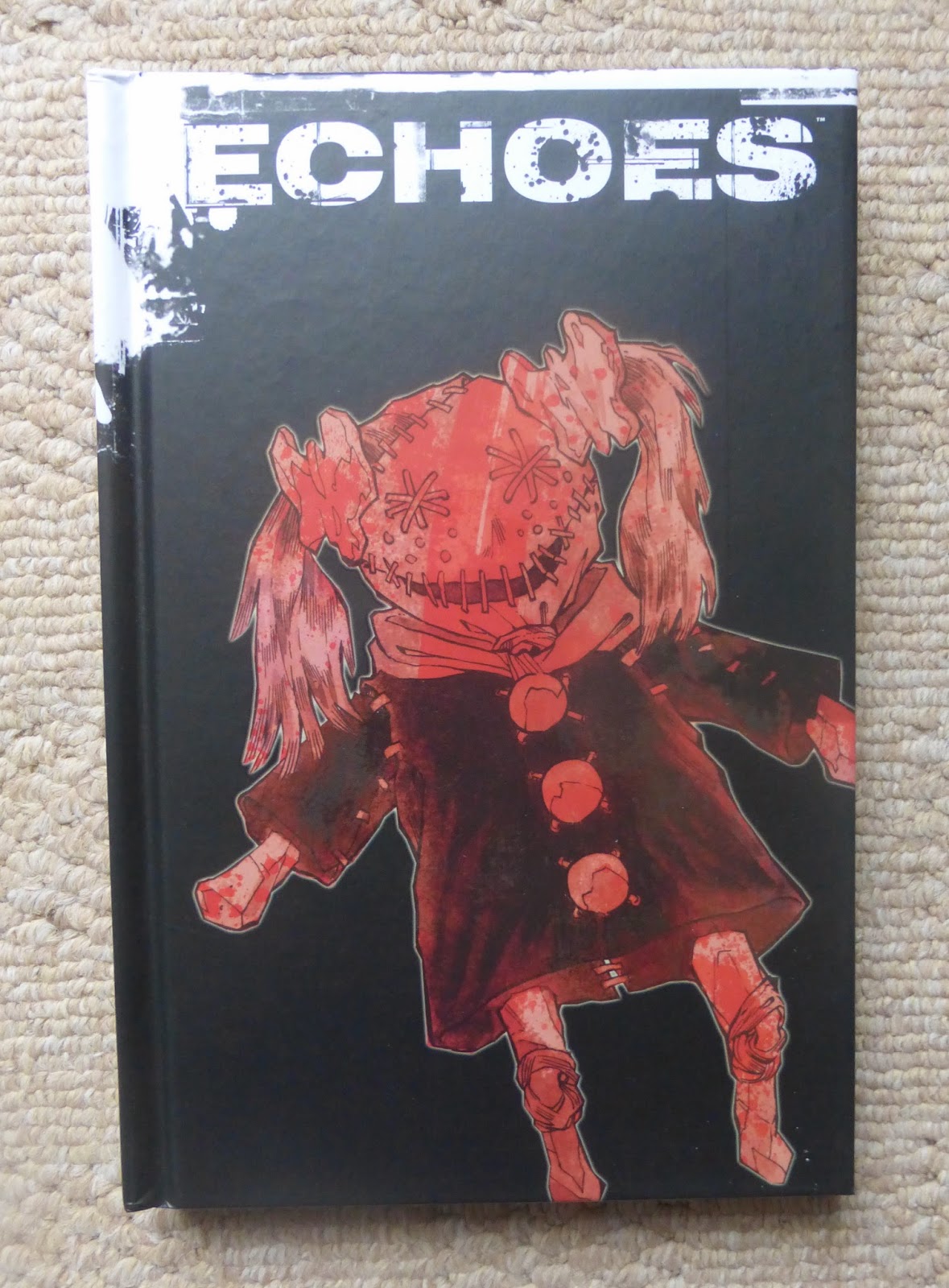 Echoes by Rahsan Ekedal and Joshua Hale Fialkov: Transparency is effective when innovatively used, especially when it's interfaced with both the jacket and the cover, as here. The  only section that's transparent here is that one small central window which gives the reader a glimpse into something bloody and sinister. In removing the jacket you get the full horror of the bloody, creepy doll. Again the splash of a single, vivid colour breaks up the monotony of black/grey/white. It's also a rare case where the title is not on the dust-jacket but on the hard-cover, in keeping with the 'uncovering/unearthing' theme, although I'm not sold on the 'Introduction by Steve Niles' text running across the bottom, considering neither artists or writer are credited- it's out of place and the red lettering draws unwanted attention to it. 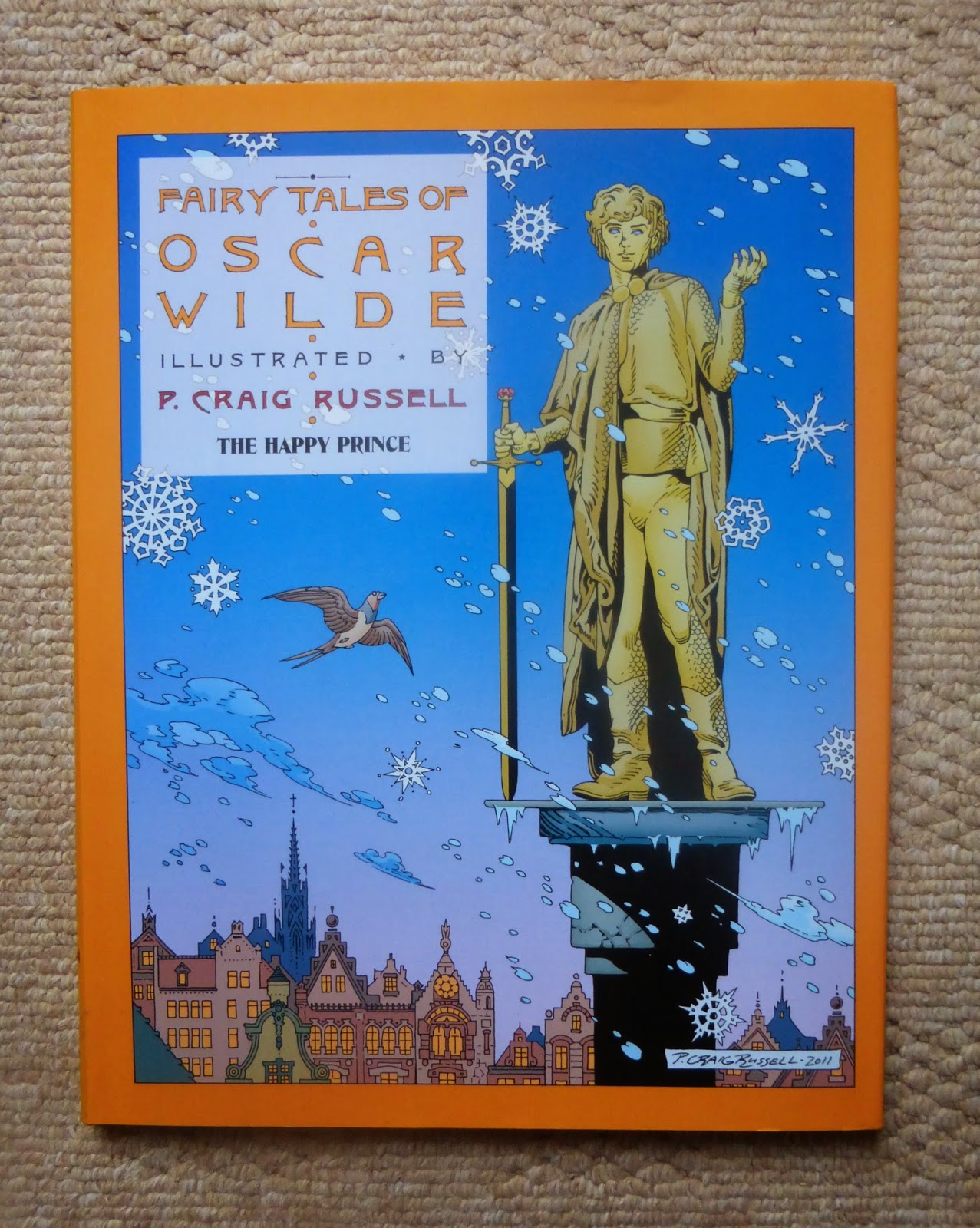 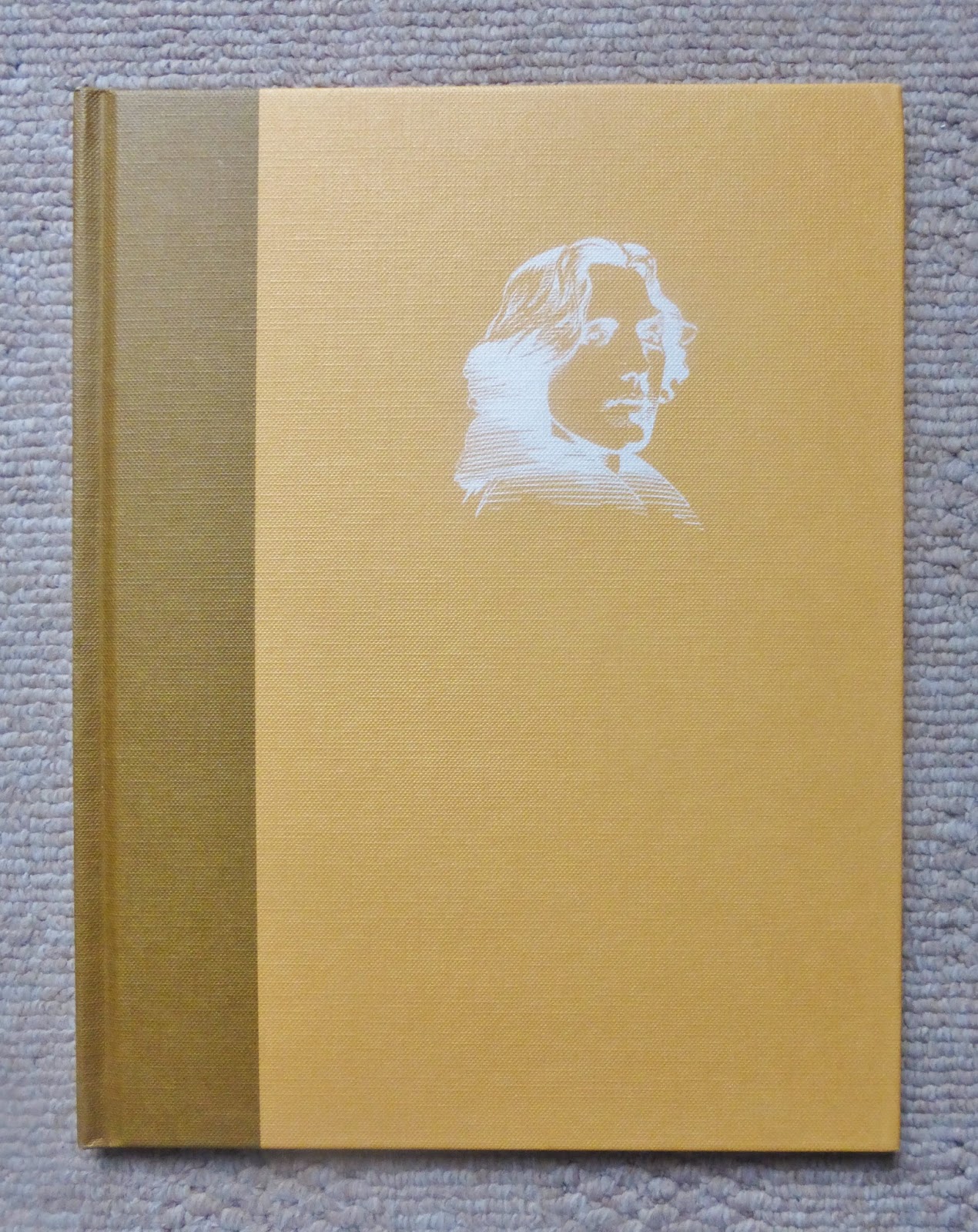 The Happy Prince by Oscar Wilde, illustrated by Craig P Russell: So you've got Craig P Russell illustrating a lovely glossy dust-jacket: job done there. but what about the cover underneath? What I appreciate here is that they've used the opportunity to pay a little tribute to Wilde, with a simple, familiar portrait, picked out elegantly in white, positioned centrally towards the top. The use of white is an unusual, unexpected choice, which I think works because the illustration is fine, and not large, so it's not as stark. The olive spine, whilst not the most inspiring colour, combines with the cheeriness of the yellow, providing a block of contrast. 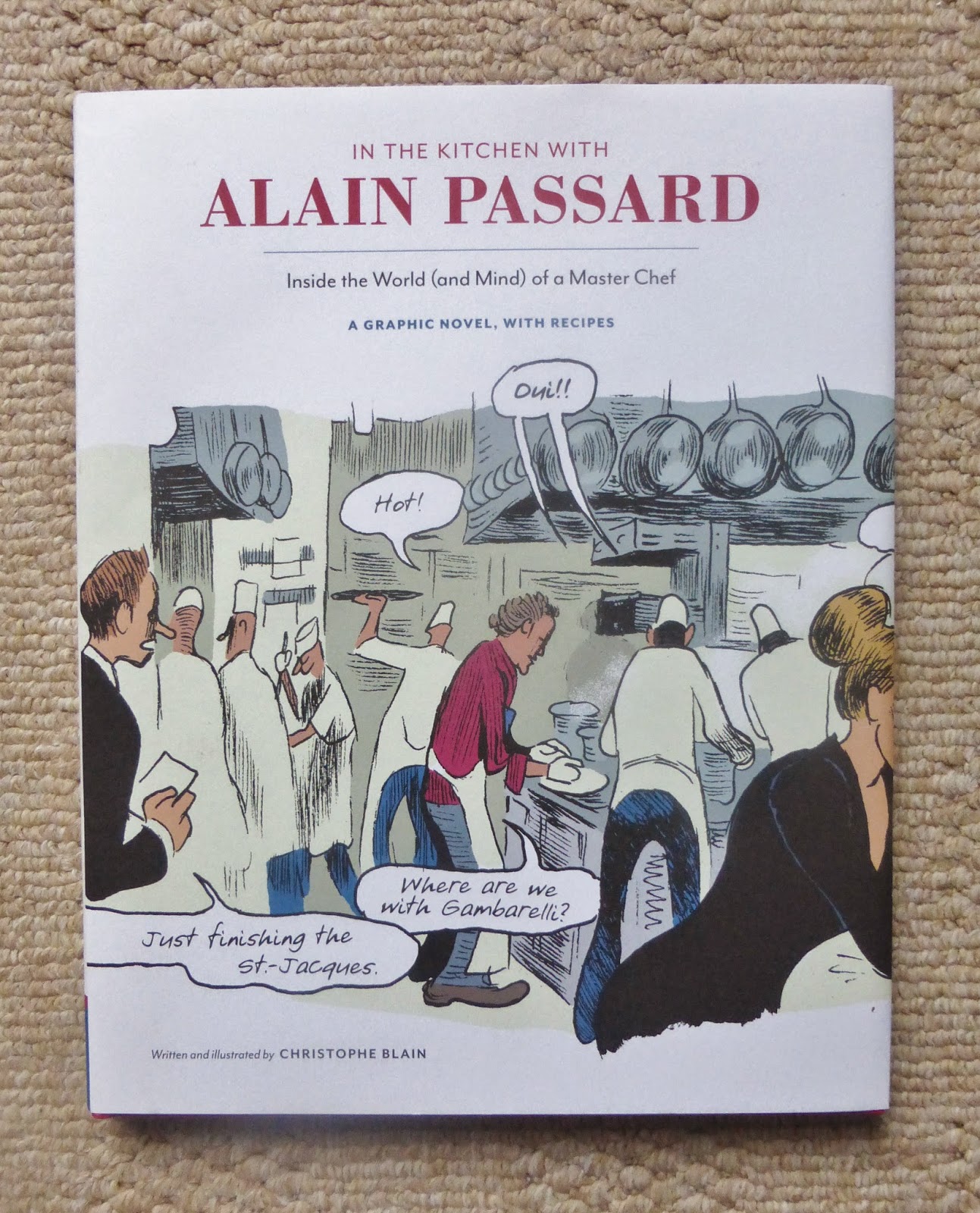 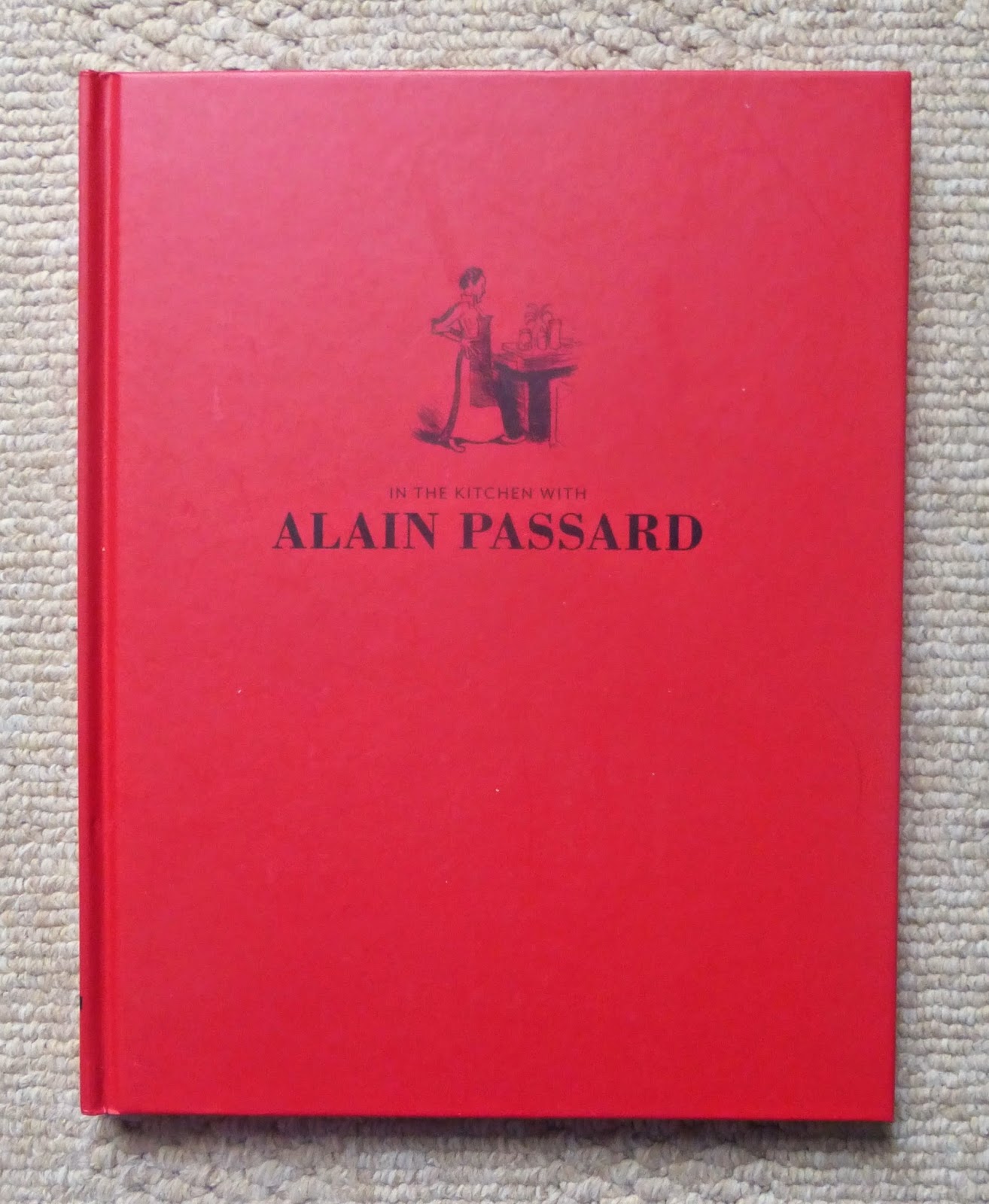 In the Kitchen with Alain Passard by Christophe Blain, and Feynman by Jim Ottaviani and Leland Myrick: Three keywords here: simplicity, colour, and placement. Similar to the Wilde in  different ways: Blain's use a deep shade of red with a contrasting black deboss illustration and the repetition of the title (in a nice touch, a partial of the illustration can also be found on the spine). The Feynman book uses it's background sea of turquoise  and a white motif, which provides a sharp, refreshing contrast that again serves the fine lines better. The choice of illustration is a loose and dynamic, complete with sfx, and a lower right positioning. You'll note in all three covers, the placement of the image is never slap-bang central- you don't want a small picture drowning in an ocean of negative space. Keeping it in the middle, but moving it definitively towards the top or bottom is compositionally pleasing, with colour curtaining away from it. The Feynman's lower right is unusual but effective, because it's not too extreme and fits with the activity and motion of the character. 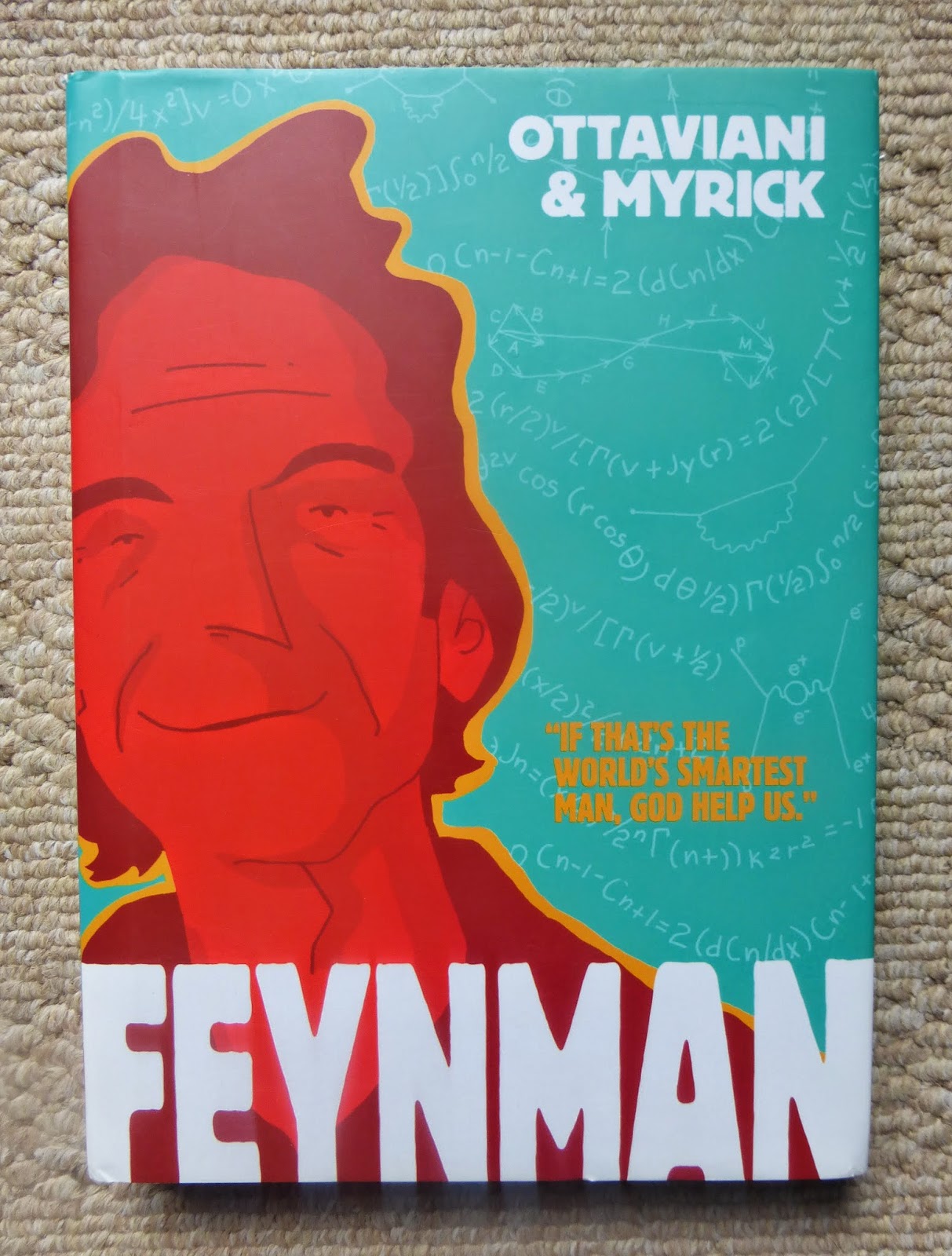 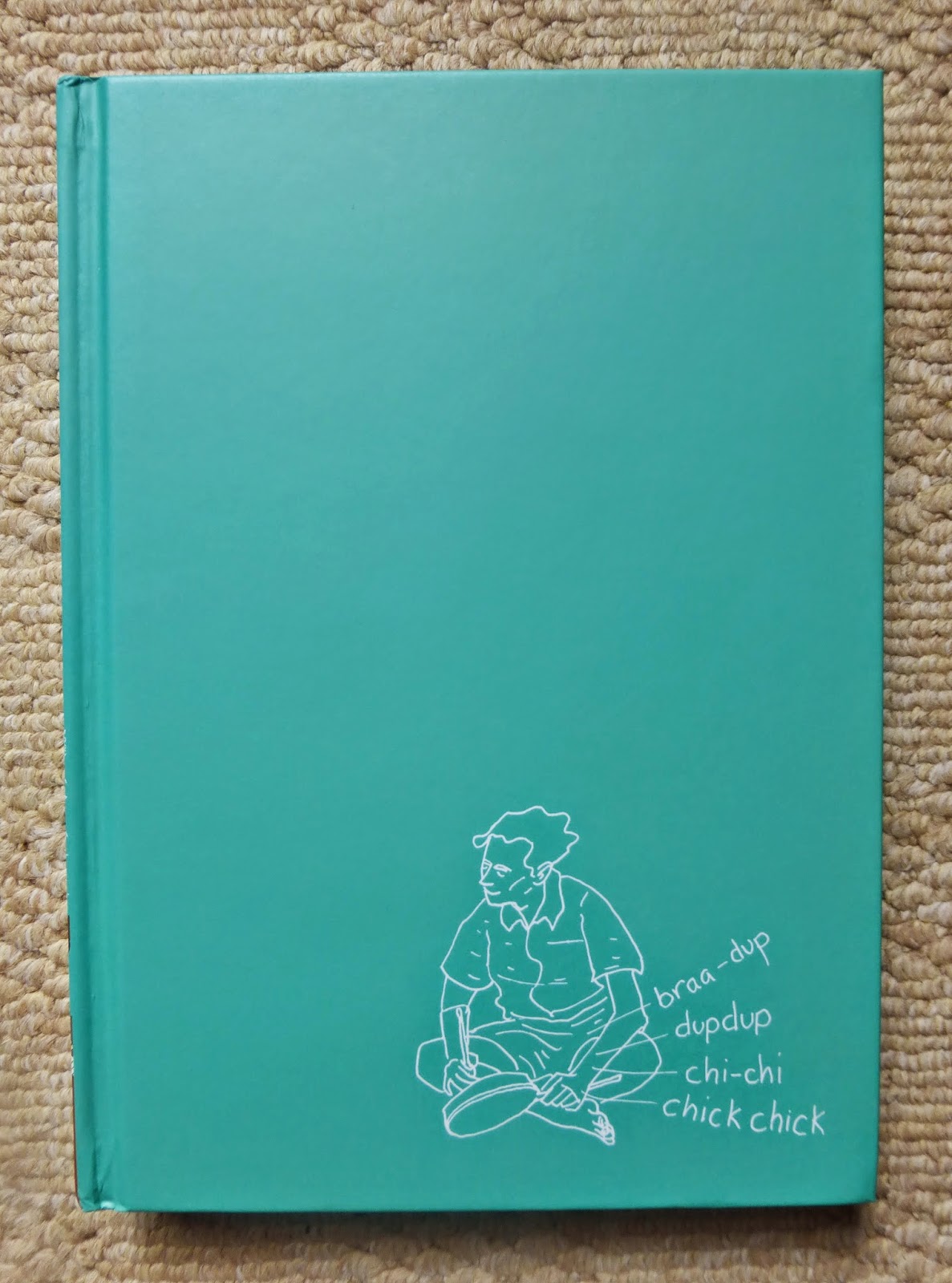 Batman: The Killing Joke by Brian Bolland and Alan Moore: I haven't included the original jacket cover for this, because we all know what that looks like, right- it's as iconic as they come. This is brilliant, and the kind of thing that sets print apart, for me; these sort of touches that can be felt and admired in physical form only. It's rare, too, that you see a full cover deboss illustration like this, particularly a coloured one, but look at how amazingly special this is. There is what looks like a purple metallic edition of this also- I believe the older editions are in green and the newer reprints in purple, but I may be wrong. Neon green and purple- the Joker's colours, and pretty arresting when used in this manner.

The illustration is, of course, from the famous joke-telling sequence, the panel in which Batman's clapping the Joker's shoulder, both of them laughing hysterically at the latter's joke; the rain lashing around them, the 'EEEEEE' of the sirens clashing with the 'HA HA HA HA's.' Colour deboss just looks gorgeous, here and it's actually rather liberally applied, in a way- the main blocks of green filling the Batman's and Joker's silhouettes, and then used to outlines the sfx, as a framing border, and for rain. The title at the bottom is there if you need it, but secondary, really. On the back cover -and now I'm going to eat my words and take back what I previously wrote about central positioning- is a playing card featuring the Joker and Batman, a cherry on the icing. The central positioning isn't as relevant here (although it still holds true- all you have to do is imagine this as a main front cover, and it's nowhere near effective)  because it's a back cover- it's impressive enough that the back has anything on it at all. A fantastic cover, and worth protecting. 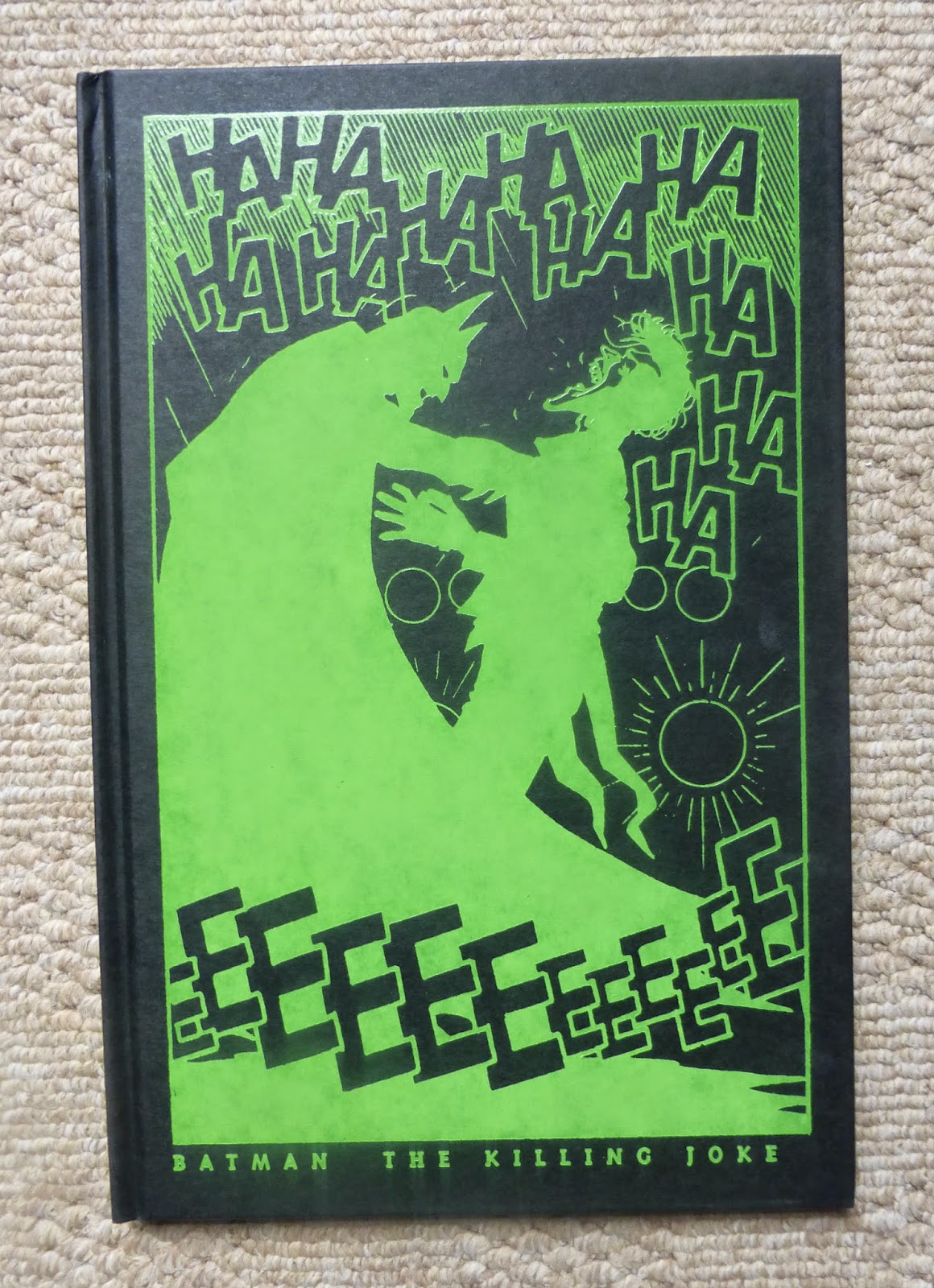 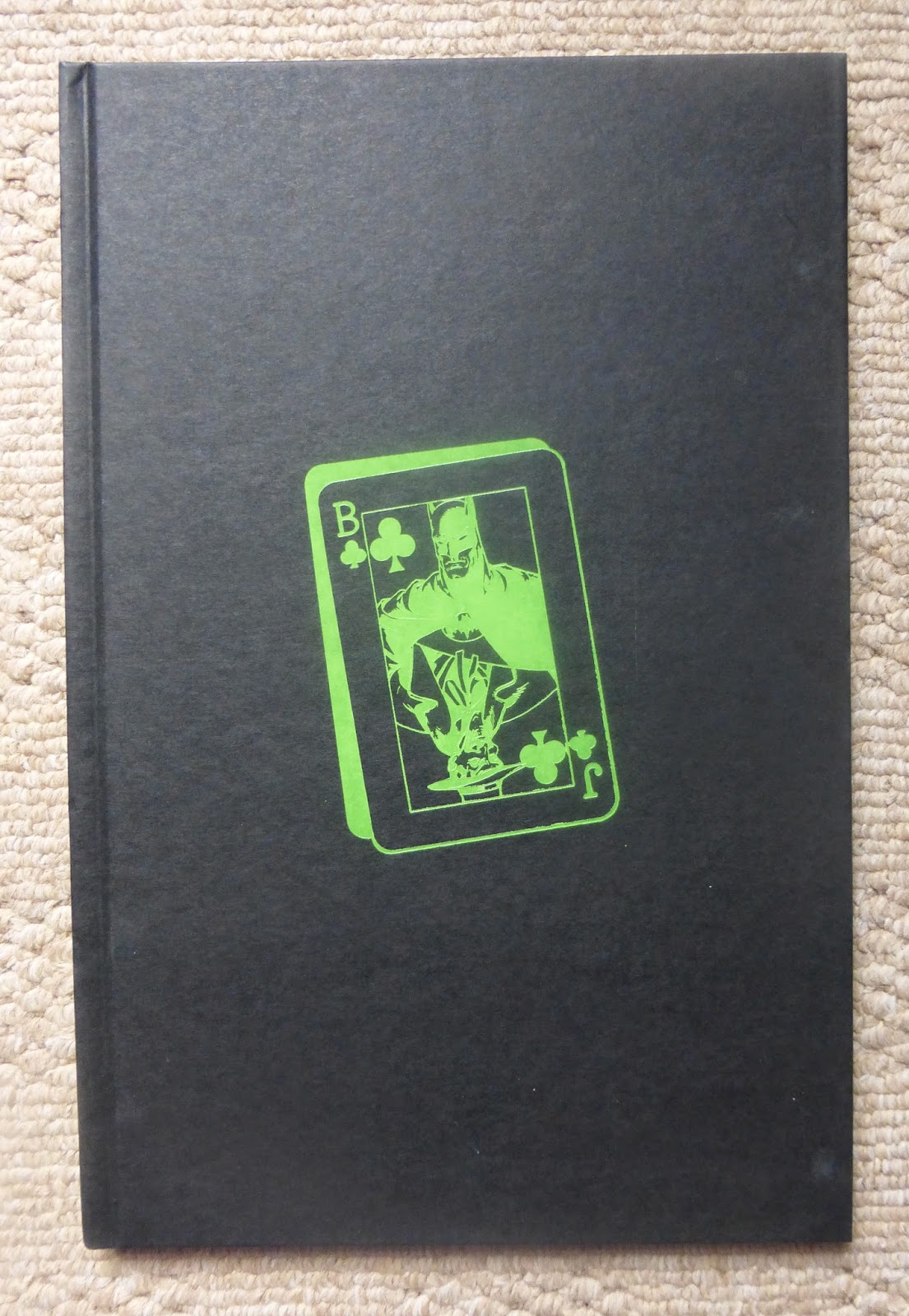