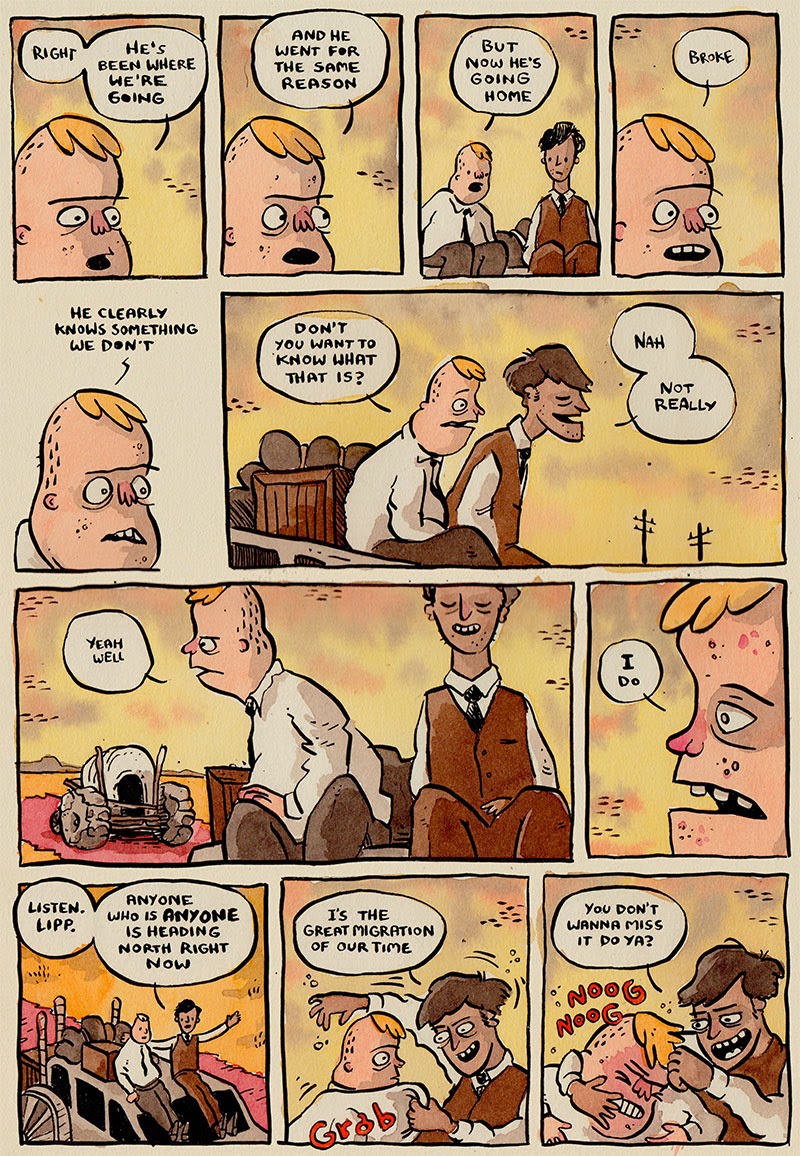 I've been meaning to direct your attention towards the latest, newest, shiniest comic from Pat Grant, whose name you may be familiar with from Blue (surfer comic/childhood haze days/discussion on prejudice and racism) and the superb Tooriyama, his evocative memoir detailing his relationship with his father. Luckily for you and I, Grant's a great champion of making comics to read online, and you can read both those titles for free simply by clicking on the name of each. He's just begun publishing his newest work, Ambient Yeast, online, and tells me he plans to also release it as a regular floppy comic every now and then, with an eye to publishing it as a graphic novel or series of graphic novels in the unforeseeable future.

So, I've not actually told you what Ambien Yeast is about, and I'm not going to, because I got in touch with Grant, and if you read on, you'll agree with me that his summation is brilliant:

'It’s a story about teenage confidence men in a weird post-industrial future time. Two brothers are heading north to a frontier boom town to make some sweet money and they get caught up in a grifter syndicate headed by a couple of older girls who are a bit hot and a little bit scary. There are lots of entertaining short-con operations like in the opening scene of The Sting.

There is a lot of weird and grotty technology in the world, most of which is made from salvage and scrap and powered by human bodies working on elaborate pedal systems. There is teenage heartbreak with a weird yeasty residue. Kids being nasty to each other. Kids being nasty to grown-ups. Emotional fuckwittage etc. It’s set in Australia. Somewhere up North where there are festering wetlands. The sort of place where fungus lives in your shoe and the bloated carcasses of Water Buffalo float around in the fresh water supply.'

And god, it looks bloody lovely, doesn't it? I'm loving the watercolours- and the colours, full-stop: the dry heat of the yellow/orange/red. I'm really digging all the concocted mash-up vehicles, and the diagramic way he's illustrated the wagons (see below), in addition to the burgeoning relationship dynamic between the two brothers- I smell trouble ahead in that direction. Go read it now, and then bookmark it for future updates. For all you process nuts, Grant's also set up a Tumblr blog that where he posts pencils, step-by-steps, colour tests, and snippets of the comic itself. You can find it here. 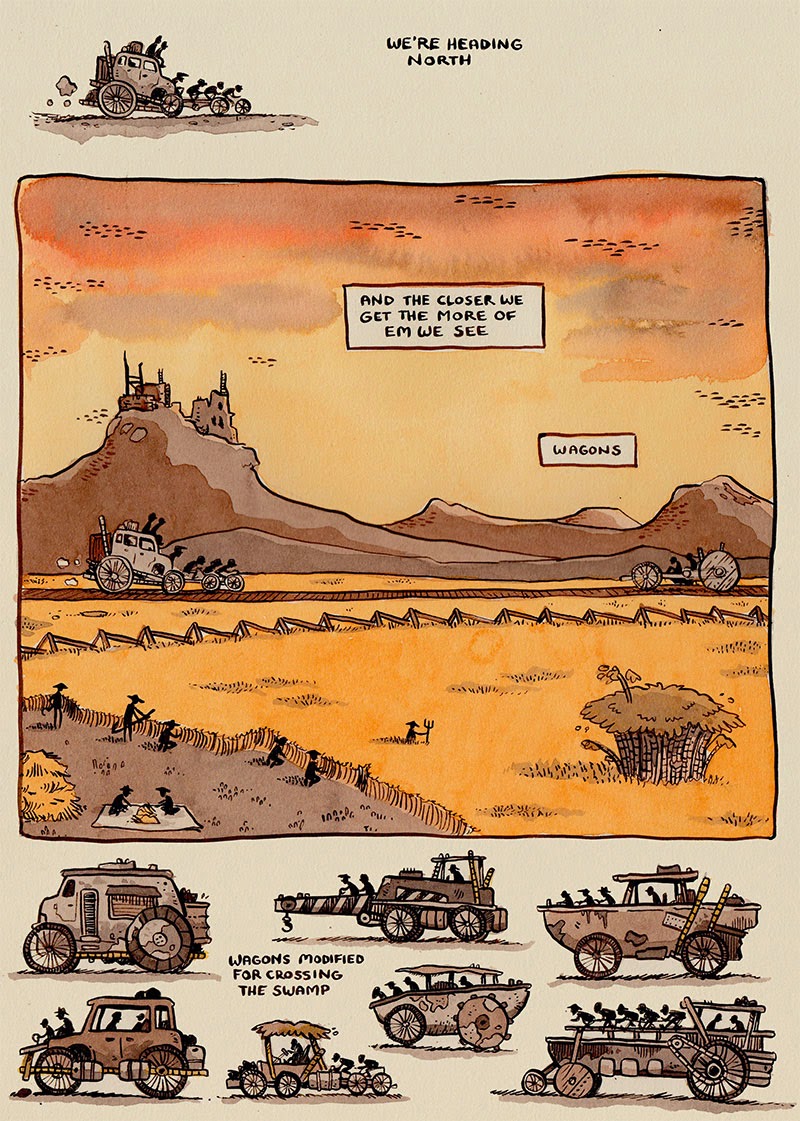 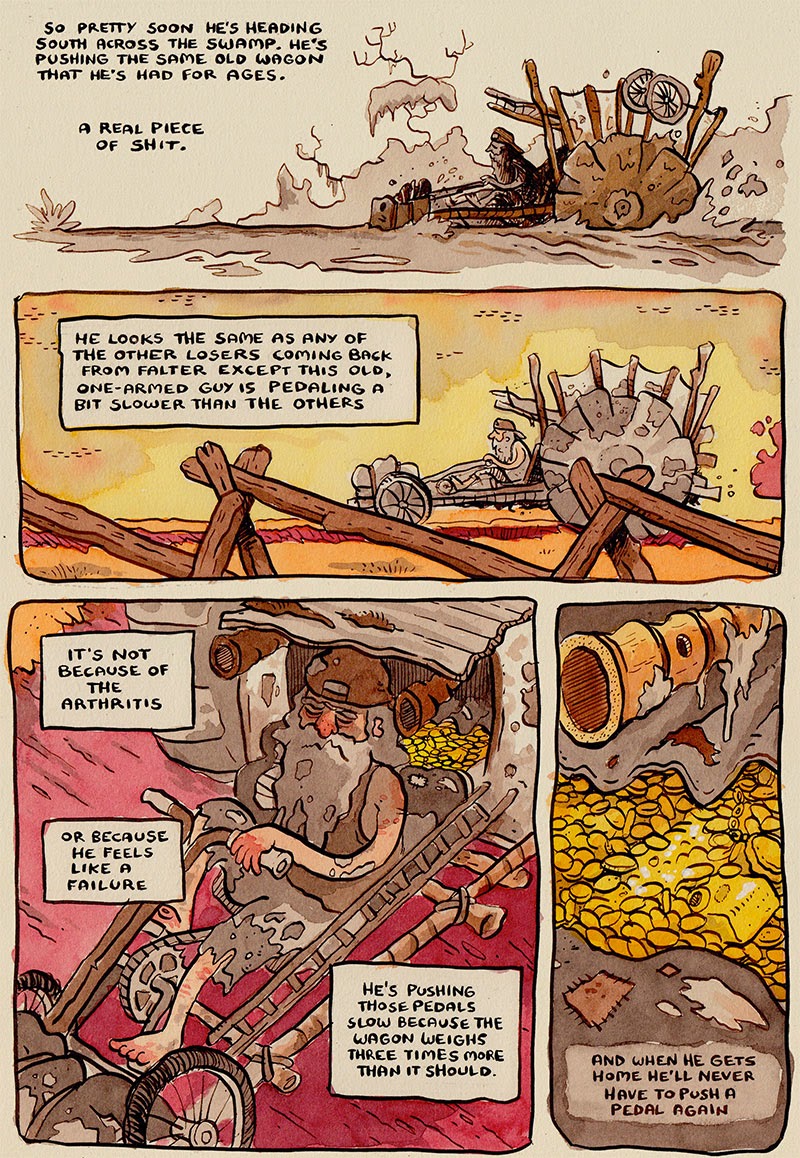