A simple idea behind the Take 3 Panels feature: introduce a book and its authors, with a brief overview/outline of plot, and then pick out 3 panels from it to deconstruct and chat about.

The comic: Batman: Dark Victory by Tim Sale, Jeph Loeb, Gregory Wright
The story: 'The sequel to the critically acclaimed BATMAN: THE LONG HALLOWEEN, DARK VICTORY continues the story of an early time in Batman's life when James Gordon, Harvey Dent, and the vigilante himself were all just beginning their roles as Gotham's protectors. Once a town controlled by organized crime, Gotham City suddenly finds itself being run by lawless freaks, such as Poison Ivy, Mr. Freeze, and the Joker. Witnessing his city's dark evolution, the Dark Knight completes his transformation into the city's greatest defender. He faces multiple threats, including the apparent return of a serial killer called Holiday. Batman's previous investigation of Holiday's killings revealed that more than one person was responsible for the murders. So the question remains: who is committing Holiday's crimes this time? And how many will die before Batman learns the truth?' 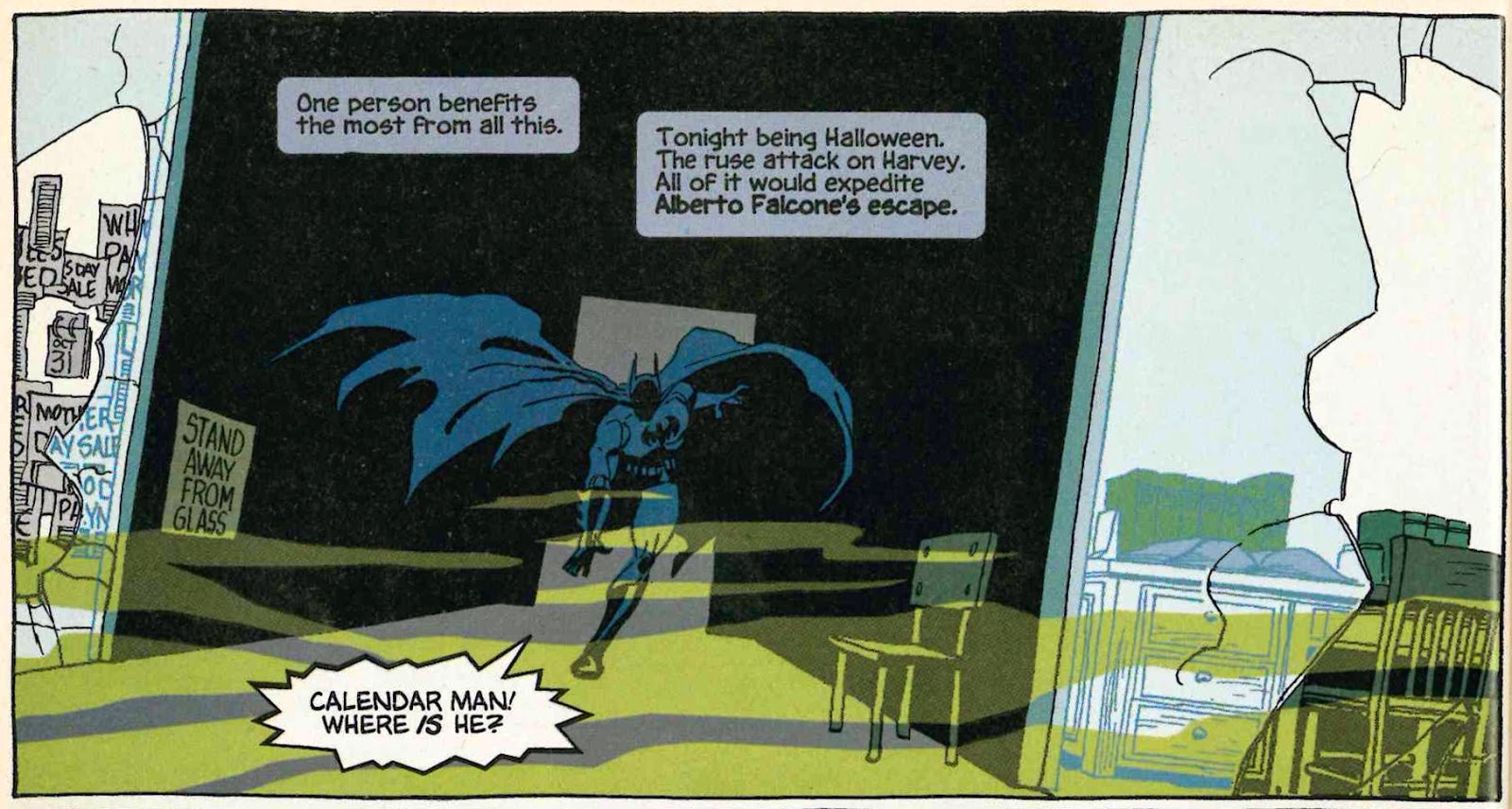 I really like this panel- the almost abstract nature of it, the half-tones, the angle. One of the things I enjoy most about Batman is the drama and bombast- the swagger that you can find even in more understated stories- it can be really over-used by authors eager to provide that cool moment, but it's best when conveyed in slightly more subtle fashion. Here, that frisson is provided by the figure of Batman running faceless through a doorway, cloaked in shadow, cape billowing, green fumes of gas swirling out towards him (the fumes form a pathway that point triangularly outwards, directing the gaze to Batman). Gregory Wright did a stupendous job colouring this trilogy, and this is a tiny example- try to imagine this panel without the green, and it immediately kills most of its power; the colour and the fumes pull it all together. The reader is getting the Calendar Man's point of view from behind the glass here, and it's a reminder that this is the way people usually see Batman- the trepidious effect he strives for, made more compelling as he's coming at the reader. There's a few things going on here, visually- the tilt of the panel suggests the gas is taking a toll, where the broken glass produces another layer of interest, by breaking up the colour scheme and giving the panel air. 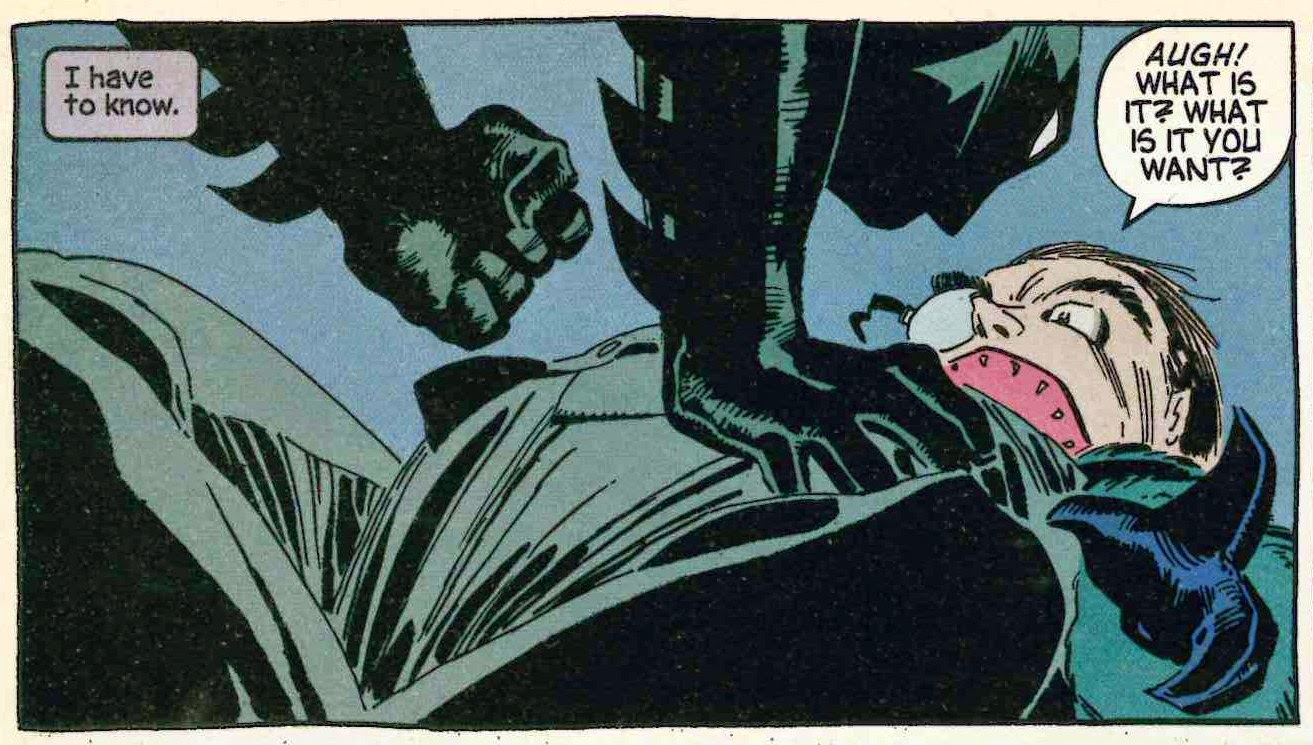 I love this panel- the expressions and body language are superb. A weird thing to pick up on, perhaps, but one of the things about The Long Halloween/Dark Victory/Haunted Knight trilogy I like is is how Sale uses teeth as a characteristic to further define his rogues gallery-especially the Joker and Penguin. Joker's given this slab of an elongated grill, and as you can see from this panel, Penguin has these strange little, sharp pointed teeth, set far apart (penguins don't have teeth, but sharp spikes on the tongue which help to grip prey), which, coupled with the round wide-ness of his mouth, is reminiscent of  a shark, more than anything else. Again, the choice of angle here is fantastic: Penguin looks very much like a stranded, belly flopped creature, his beached status emphasised by the  manner in which his legs are bowed- bent inwards at the knees. Sale plays up the 'animalistic' aspects with deft touches: the odd pawed gloves he's wearing, the beakiness of his nose. The textures here- on Batman's gloves, on Penguin's paw and legs, and the rich, soft quality of the colours: blue/black/green, with a pop of pink to set it all off is lovely- so well done. Sale's inking paired with Wright's colouring is a dream combination for me.

The underlying humour of the situation -topped by Batman's hand placed on Penguin's rotund belly- is nice, too. 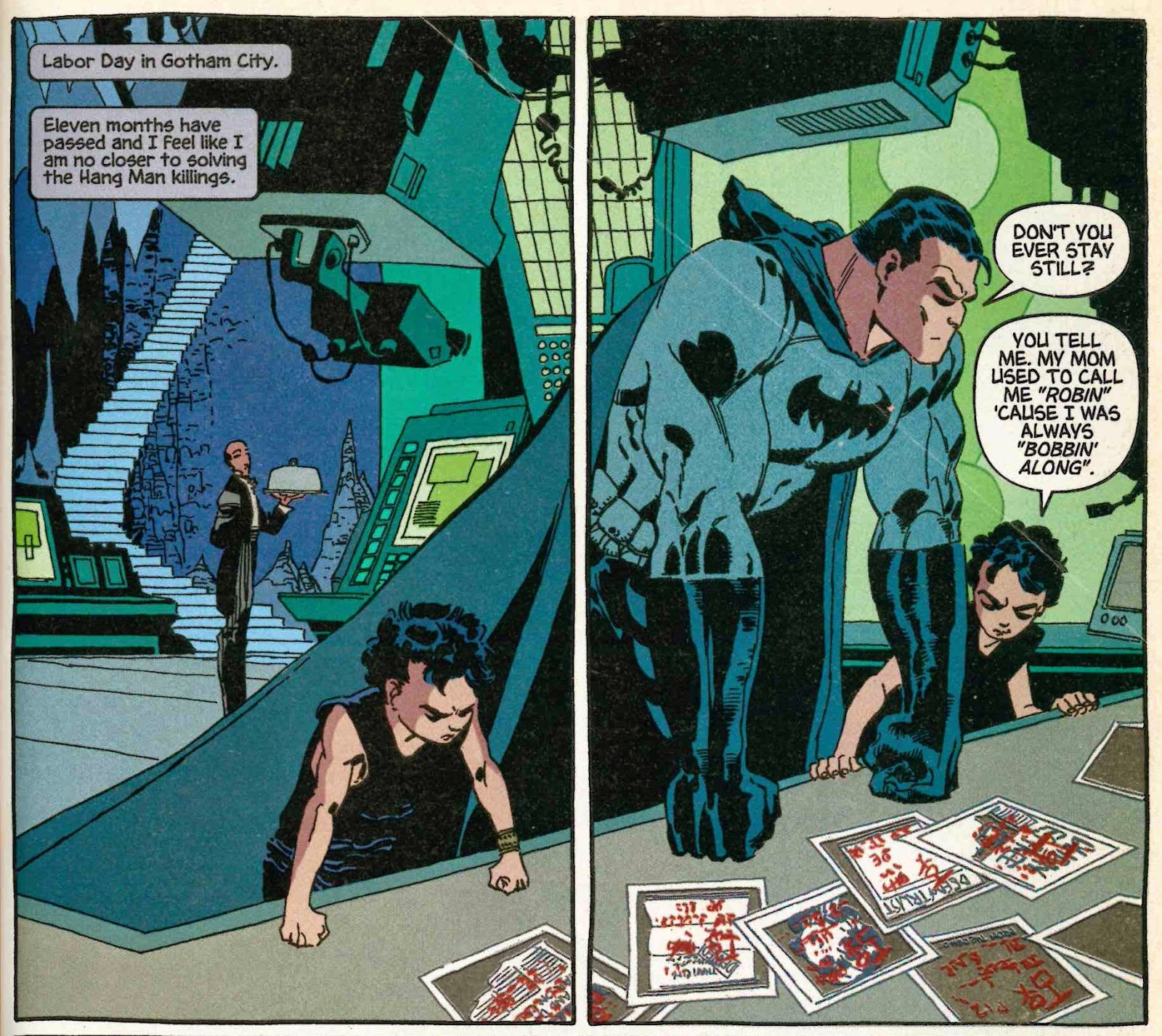 I'm the biggest fan of Bruce and Dick: the BIGGEST. So even as I'm aware many people consider Dark Victory a lesser book in comparison to Long Halloween, I love it for it's portrayal of Robin's introduction, and that relationship. Batman's effectiveness as a character depends on how he's written- it's easy to take the superficial or the known and run with that, but Loeb does a great job without dwelling overtly on the making of a partnership: a kid and a bigger kid (essentially) who come together naturally bit by bit, epitomised in the sequence where Bruce reveals himself to be Batman: the expression on his face open, nervous, soft at the same time.

This panel is a wonderful example of character exposition via art, simply conceived and executed to brilliant effect: Sale's illustrating Dick's constant movement, kinetic energy and zippiness by actually drawing him twice. Ostensibly it's one panel, but the border line indicates the minute shift in time (God, I love comics!); so minute that nothing else has moved apart from Dick. It's indicative, also, of how fast he is: the scene reads left to right- Dick starts on the left, and as the reader pans across to the right, he's over there already, talking to Bruce. So you get that quick cockiness combined with the child wanting to impress: in the initial pose on the left, he's copying Bruce's stance: arms apart, fists closed down on the table, his tiny hands juxtaposed against Bruce's huge gloved ones.  He's still wearing the little gold band on his right arm; the only marker of the Flying Graysons and his circus background. I love Alfred hovering in the background there, just being watchful over things- it's all still a new equation, with everybody getting used to one another.

The placement of thought and speech bubbles is thoughtfully composed: we begin on the left with Bruce's inner monologue, which is interrupted as we continue reading on the right, by Bruce asking Dick if he ever stays still. He literally breaks off his thoughts to speak to Dick.

I know people love The Long Halloween and Dark Victory for the whole noir mystery, mafioso leanings, but honestly, these are two of my favourite books to simply pore over for Sale's and Wright's art- so dense, so singular, and so much to appreciate.
Posted by Zainab at 12:00