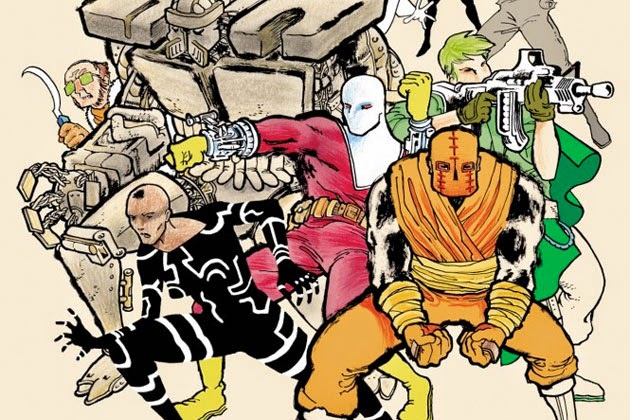 Comics shelfie time, this week with Michel Fiffe. Fiffe's self-published comic series, Copra, has been a bona fide break-out hit for the artist, one of the most acclaimed titles in recent years. he's been credited with breathing new life into the superhero genre, a talent which hasn't gone unnoticed, with Marvel hiring him to write their All-New Ultimates title. Today, he's here to share his comic collection, and discuss some of the books and artists which have impacted upon him. 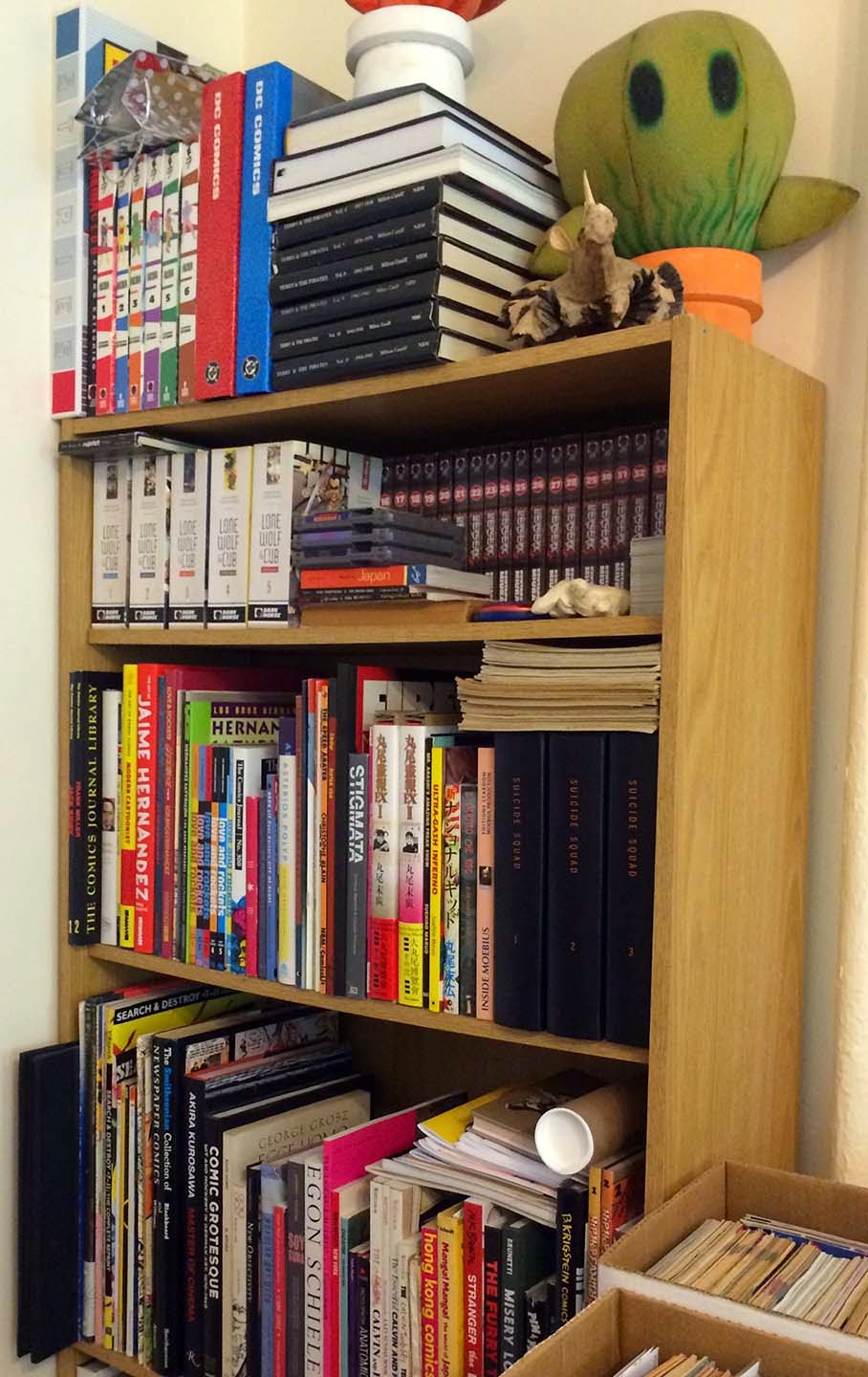 'I don't want more comics, but they're endless and I need them and sometimes I can't help it. I'm constantly resisting the urge to amass and hoard the comics from creators I like (as opposed to collecting that which I thought I had to own - that's some old school collector tic that I've long gotten rid of). Why would I resist collecting comics I would enjoy, then? Because clutter bugs me out, especially when it's mountains of unread, unopened objects that feel more like homework than something to get excited about. I've also schlepped enough crates and long boxes between apartments to make me want to throw it all in a shredder and then set the shredder on fire.

Instead, I've whittled it down to this one modest bookshelf. 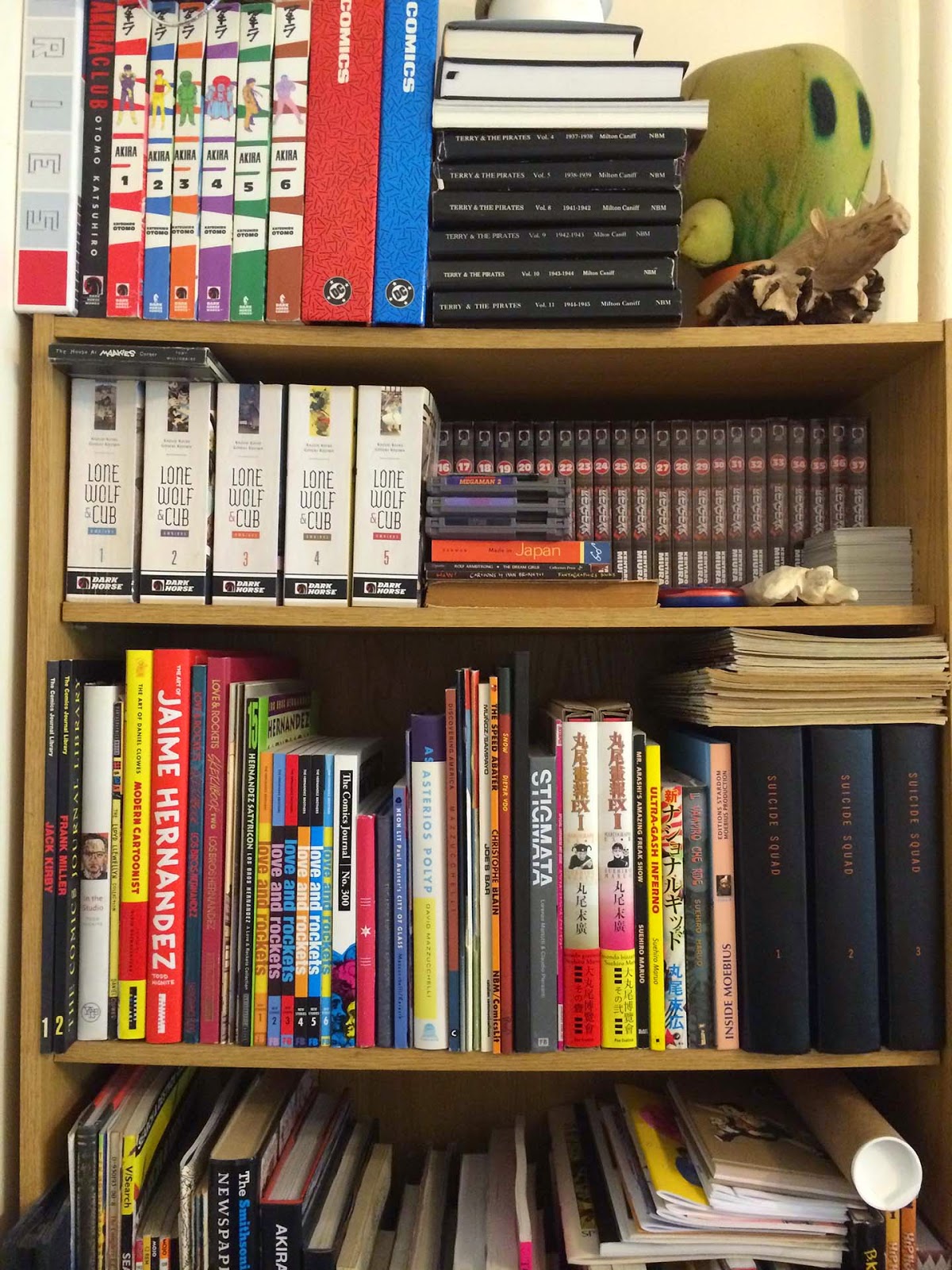 It occupies a corner in my studio and accommodates just the right amount of comics that I care to absorb. It's stories I know I'll want to reread, art I'll never get tired of looking at, and shit that cracks me up. 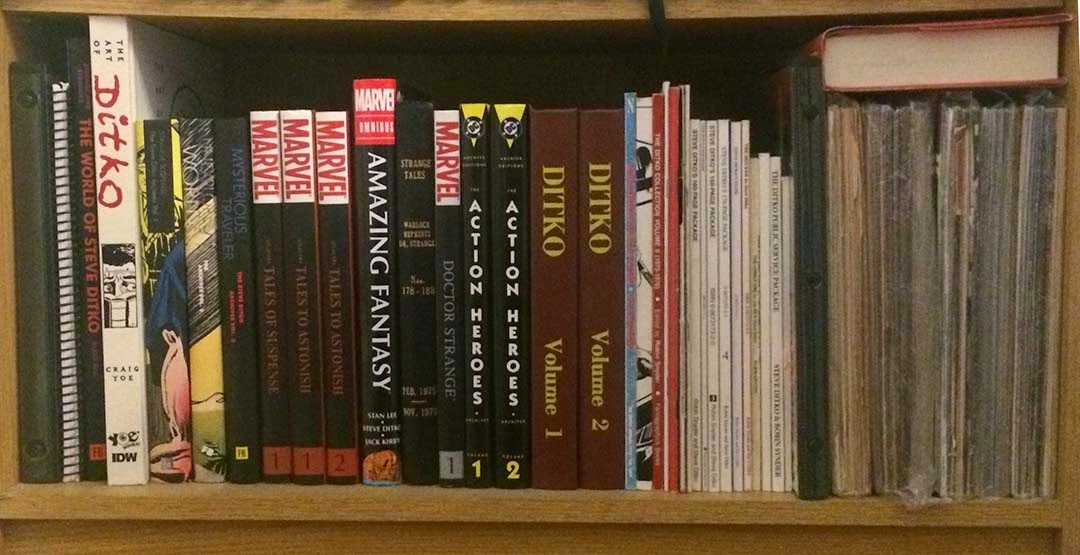 The bottom shelf is occupied by Steve Ditko related books. I have a box of newsprint Ditko comics, too, but this shelf is strictly for collections, folders stuffed with clipped  odds and ends, and my own bound books. That plastic mess at the far right is material ready to be sent to a bindery. Four bags full of ripped up comic book pages, each bag dedicated to a specific artist, Ditko being one of them. Looking at this picture, I should go ahead and toss that goddamn Yoe book. Didn't Fantagraphics release a 4th Ditko book? Perfect replacement. I love it when things work out. Aside from the comics shelf, I have a handful of long boxes. Those are always in flux, too, since that's another layer of my collector attitude. I like to buy old stacks of comics, read them, then get rid of them. Not even for trade or anything, they just gotta go. I once bought hundreds of Legion of Superhero issues in order to force myself to understand what their appeal was. No, you're right - it's fucking stupid. And who has the time? It's even worse when it's titles that I used to own, purged them once before, and I'm now hurting for seconds. It is a sickness.

Anyway, I have these 2 short boxes out in the open, consisting of issues I like to regularly look at for inspiration. These are mostly categorized by individual artists. Guys like Zaffino, Salmons and Steranko have relatively smaller bodies of work, so they can all fit in easily and still leave room for some Damage Control comics. Shown: one of my favorite Daredevil comics by early Barry Windsor-Smith. Crude but super appealing. 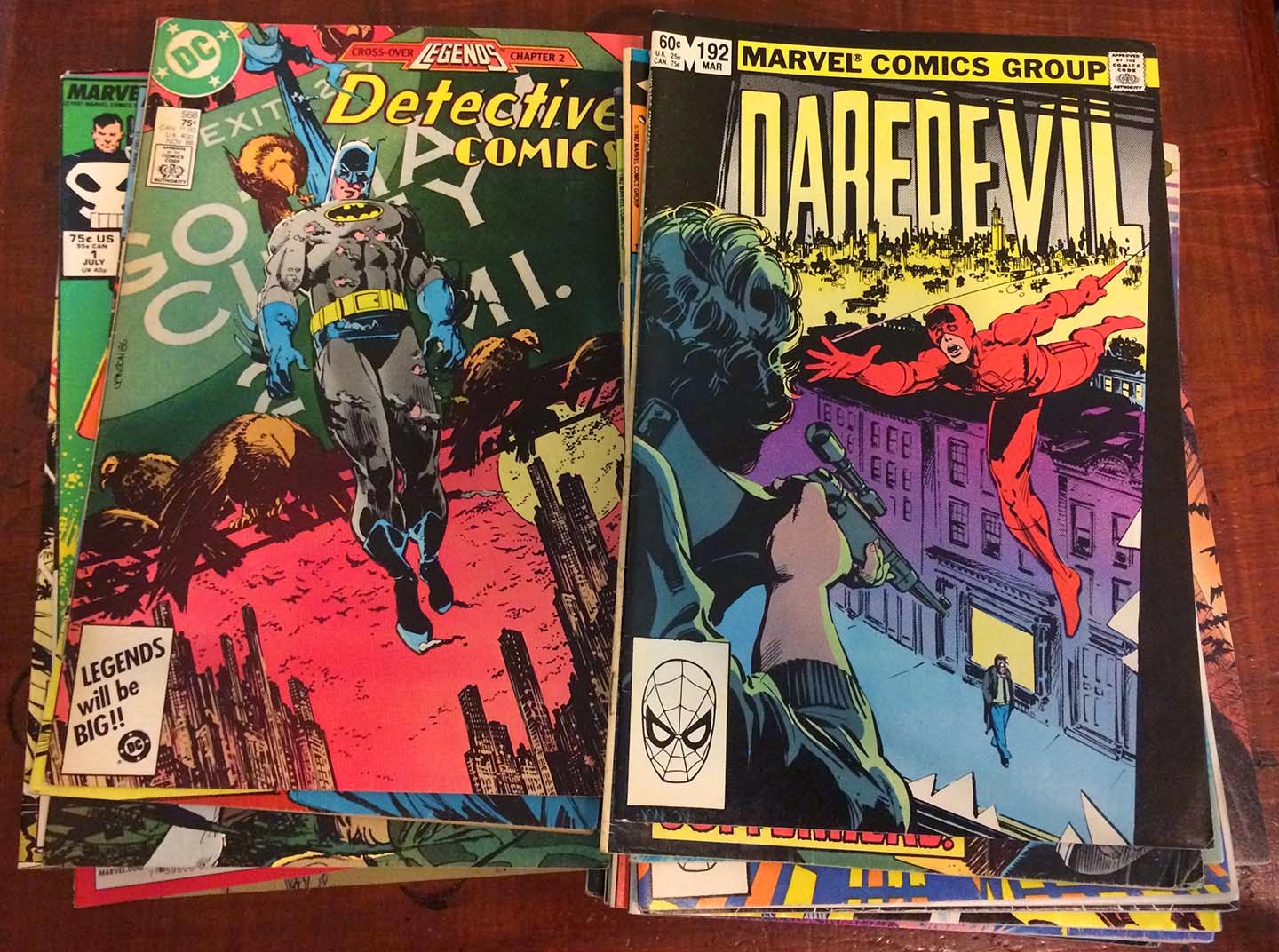 Speaking of favorite Daredevil comics, here's an artist-specific stack: Klaus Janson. From the time he was inking Deathlok to the handful of stories he's written, I've been studying tons of Janson. I keep returning to that one issue of Daredevil, though, that #192. 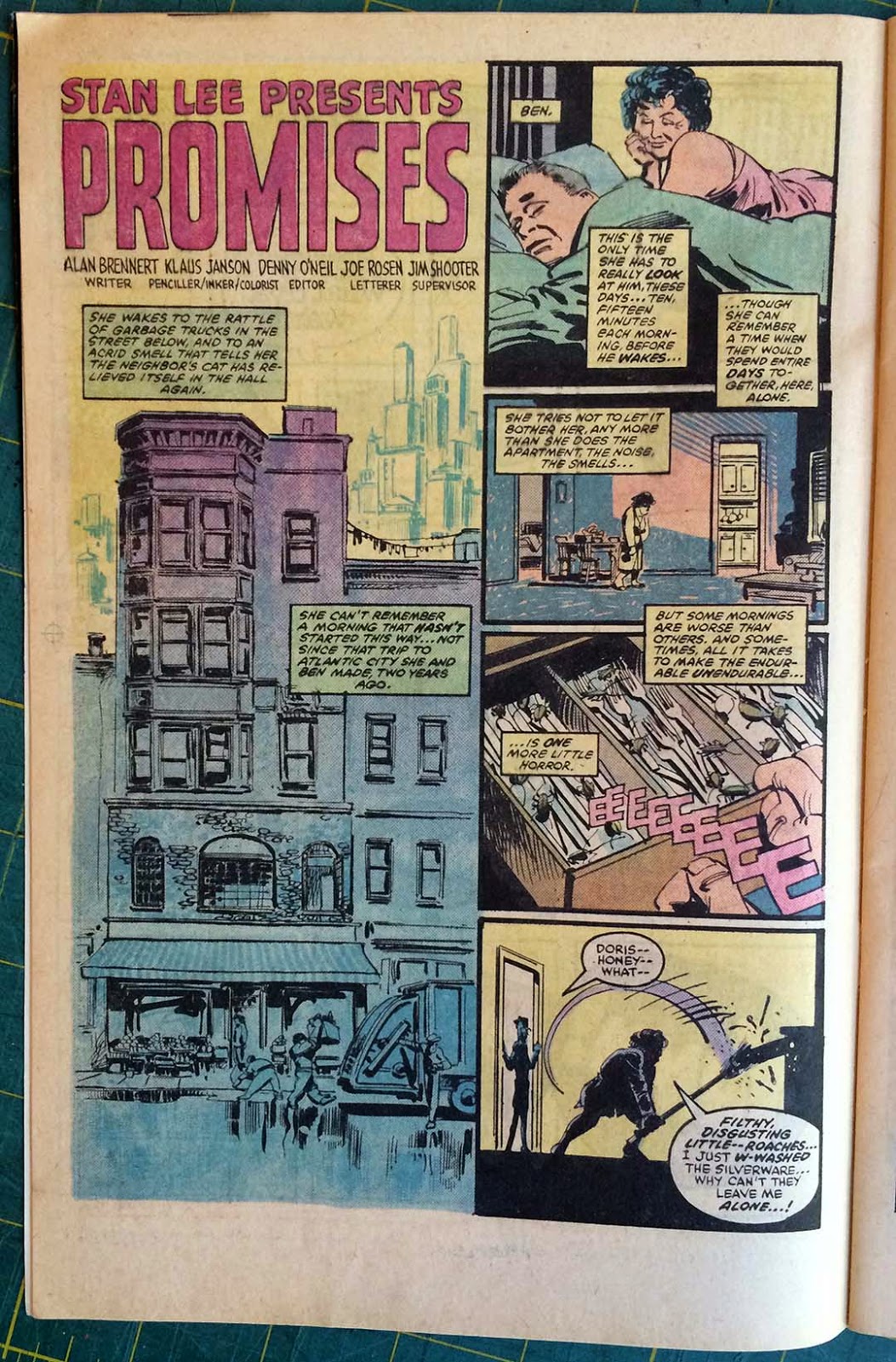 My God, that cover. It's all in harmony, the logo, the composition, the quiet desperation, it fully represents this exceptional stand-alone issue written by Alan Brennert. Janson was doing all the art chores at this point and it's all incredible. The title page hits the right notes for me. It somewhat has this Katchor quality to it. I like how the styles flip flop from the naturalism of the second panel to the cartoonish 3rd & 5th panels. It's not jarring, it makes complete sense within Janson's vision. The color's a huge inspiration, too: the gradual fades on the main building and the green color hold in an all yellow background? I drool over those decisions. 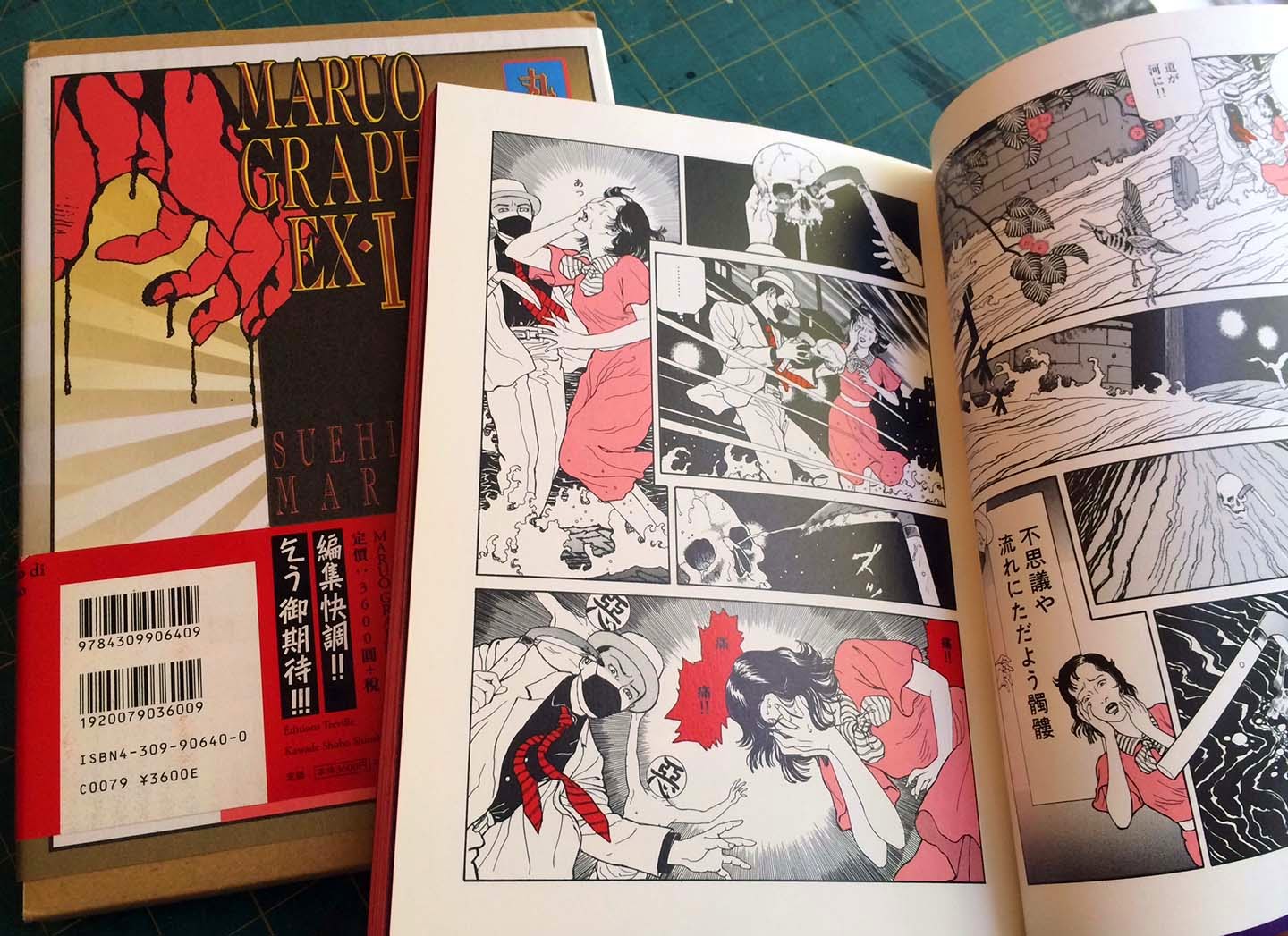 From the book shelf itself are the two Maruo Graphs that I was lucky enough to order from Last Gasp when they had them in stock. I saw Suehiro Maruo's work way back in a Naked City album, but the first narrative work I saw was when the Ultra Gash Inferno collection came out in 2001. Maruo is perhaps the last artist to have profoundly influenced me during my formative years. I would hunt for his work and never find any. I would sometimes print out images from this website that had tons of scans. Then these two handsomely packaged books were dreams come true - collections of comics, prints, sketches, and paintings. I actually thought that the Graphs would be held up by the publisher or something or that it was all a scam and that such books would never exist. I still sent that check. 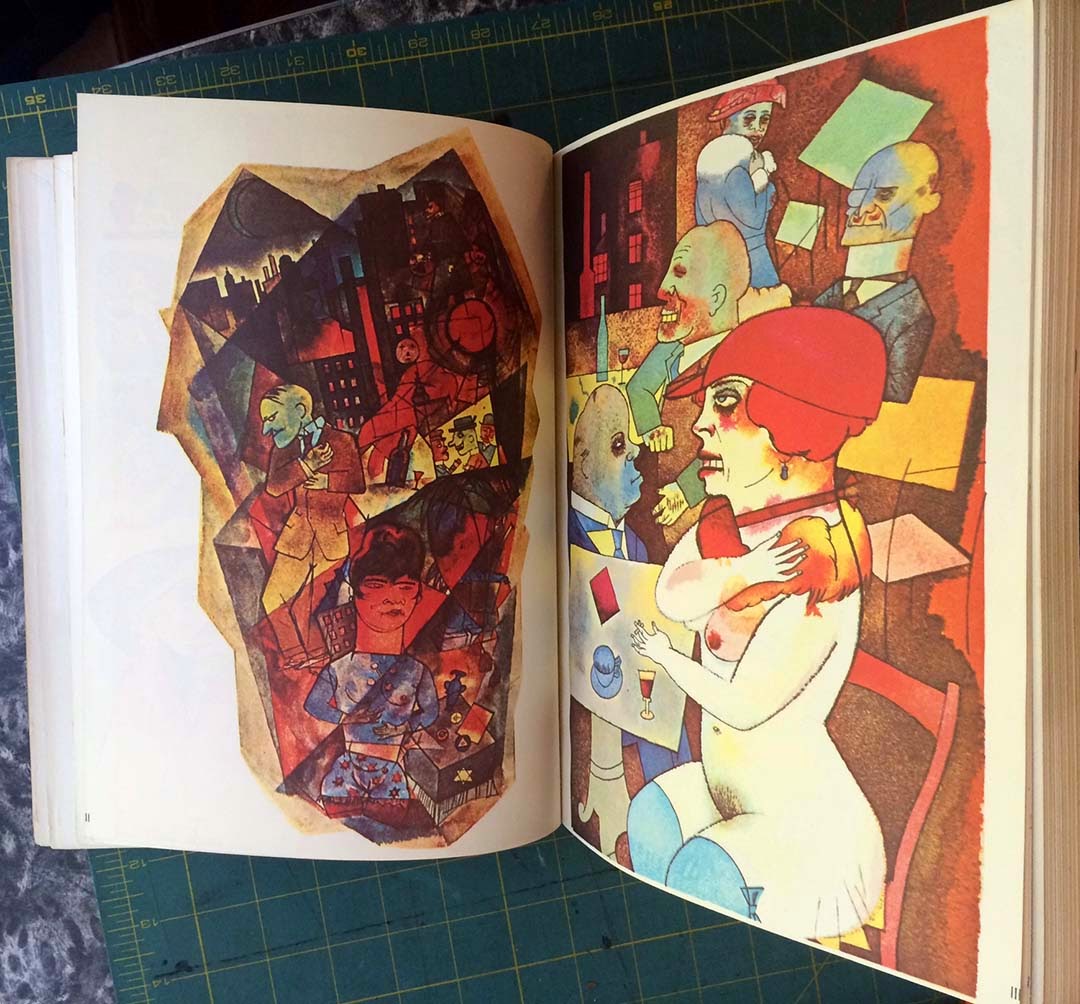 The work of George Grosz in Ecce Homo has informed the way I approach ink, color, and composition like nothing else has. All of which I use directly with my work in comics, so I think it more than counts. As someone who never worked with color up until recently with my Zegas material, I was really emboldened by Grosz's aggressive application of tones (and black ink lines for that matter). I'm referring mostly to his watercolor work (although his paintings are just as fiery). The watercolor section in this book is unlike anything I'd seen before. Reaching that level of intensity… well, it's always good to have something to aspire to.

Okay, time to pick out some books to get rid of. I need to make room for some new ones. Or I can just go buy another bookshelf.'

A massive thank you to Michel for his time and participation. You can view all the previous installments of Comics Shelfie here. Next installment will be up in a fortnight (ish).
Posted by Zainab at 09:30