Something pretty: Walrus by Brandon Graham: art-books do it like this 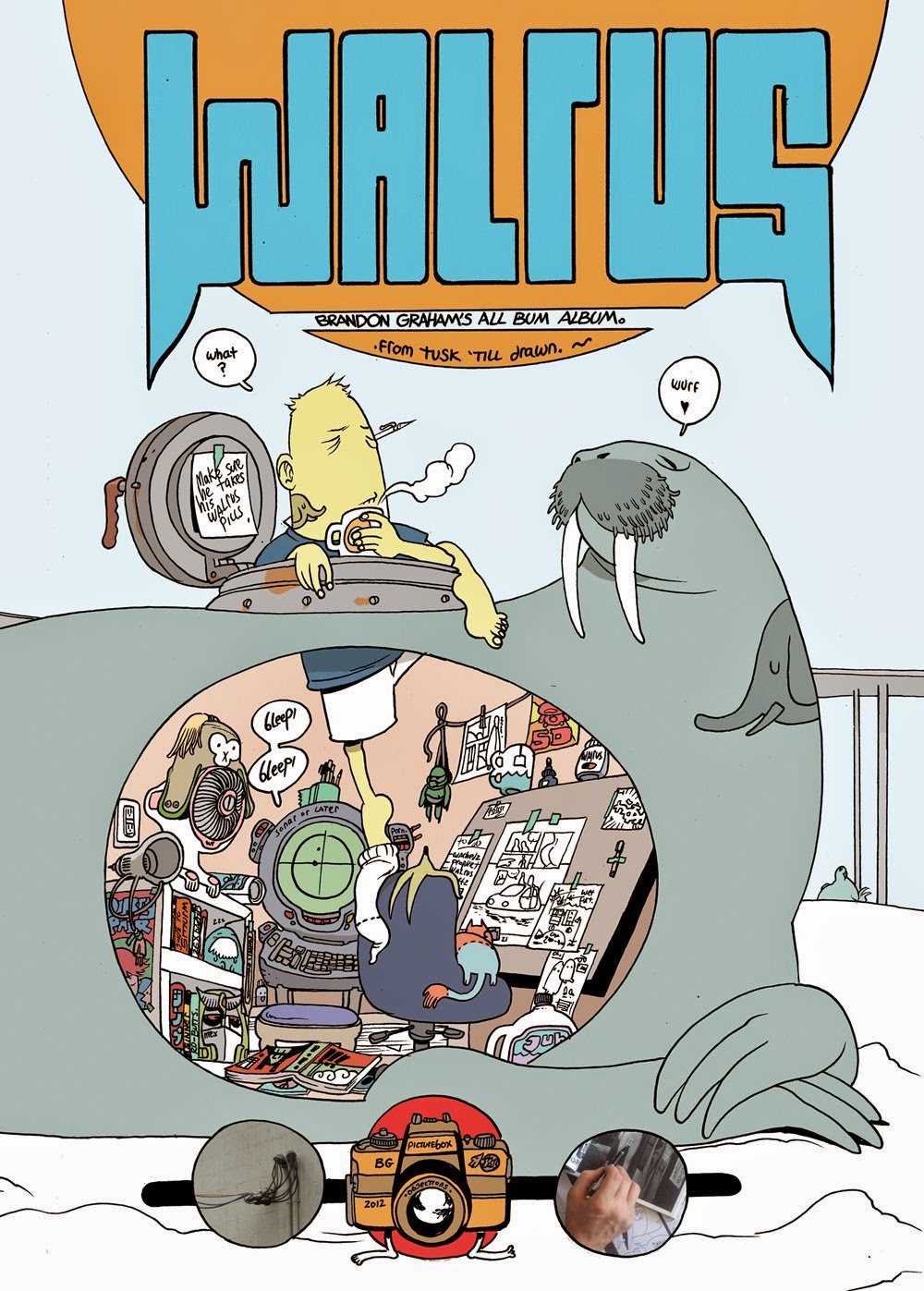 Walrus by Brandon Graham, PictureBox: There's a discussion that raises its head in comics every now and again, that if you're not knowledgeable -in a studied or professional sense- or trained about art -perhaps an artists yourself- your ability to discuss it effectively is impaired. And it's something I agree with, to an extent. As much as I try to elucidate the techniques and effects of what I see on the page, how it makes me feel, why I think something works or doesn't, I find myself frequently frustrated and grasping to properly express what's being conveyed- particularly in terms of talking about influences, derivations, and stylistic strains to the fullest.

Paradoxically, I don't think a deep knowledge of art is what's lacking necessarily; to me it seems more like a matter of context, of history, of wider reading and awareness of a range and variety of work: the more you see the more you know. I  also partly think the lexicon of comics is shallow, and although the fluidity of the manner in which the medium is discussed is something I find positive, it does make it difficult to ascribe definitions and thought, and a scale of specific meaning.

I mention this prior to an attempt to discuss Brandon Graham's artbook, Walrus, because a) well, it's an artbook, and b) having read King City and some of Multiple Warheads, I've never really connected with his writing; the art is the thing for me. Discussing art is even harder for the blunt layman when it comes to styles which appear as if they're not doing much (a style I consider Graham's work to be in); art that looks organic, effortless- it's not the most textured or doing crazy things, and yet it is doing something special. The reason I love Graham's art, or drawing style is because it is so  broadly recognisable as an amalgamation of the ligne claire tradition, married with elements dominantly associated with Japanese comics: the clarity, lines, and colour palette European, the sfx, fonts, nuances, and stylisations Japanese. Even in material like King City and Warheads, the sci-fi leans European in landscape and design, where the humour and lightness/quirk and energy is more manga-like in tone.  His people are a mix of both- the sketchier illustrations of women here evoke Manara but he can switch from that sensuality to the squeaky-bubble 'fun' sexy cartoon characters just as easily. there is such a quality of clean-ness , of clarity to Graham's art, the lines fine yet assured, never appearing tight or overly controlled or precise; there's still a sense of fluidity, but not really a looseness.

My friend Andy is just beginning his PhD in nostalgia and design, and he was explaining to me some of the things he'll be researching. One of the theories that stuck with me was the concept of notalgia and colour memory association; this idea that people retain a linked memory of certain colours and palettes from childhood memories- toys, books, cloth patterns, posters, furniture, interior design, etc. and that initial psychological bonding almost, with the colour affecting how you see colour-ways from then on- whether you gravitate towards particular shades and dislike others- consciously or not. You form a relationship. One of the major, informative texts -hell, influences- of my childhood was Tintin. It was my very first comic, and after reading them all, I would then borrow them in cycles from the library, depending on which one I wanted to read. Herge is pretty much seen as the definitve ligne claire master, but there's some aspect in my brain that links his colours with Graham's. Which is kind od odd, considering the majority of Graham's work hasn't been in colour. However, a lot of Walrus is, and a lot of the artwork and pieces he'll post on his Tumblr share the same bubblegum pink/blue/green colours, and it's all a little too much when my brain sees that style coupled with those happy shades of my childhood- it goes to the good place. Aesthetically, it's very pleasing. It's the equivalent of good writing being immensely quotable; you could pull any image or section of an image and more times than not it's striking in its own right.

To talk less arbitrarily about Walrus, it fulfills its function as an artbook from a cartoonist perfectly. Things I want from an artbook: process, sketches, notes, doodles, along with some more polished pieces,and if it's from a cartoonist then you want some comics in there right? That may sound clunkily obvious, and as much as I appreciate tomes of dry, single-page images with little text, or one-line explanations, that's really the sort of thing I associate with photography and painting, big projects or career retrospectives... it's essentially a different remit. Walrus has all those and is a nice size to boot, good paper stock, with a thick matte cardboard french-flapped cover. The book collates work from 2009-2011, and it's filled with pin-ups of various comic characters, Fantastic \Four, Conan, Tintin, Akira, and a lot more, sexy ladies, comics, collages, diagrams- that's another of those things I like- labelling and notations. When you would draw something and had to list next to it what each but of it was, and how it worked- there's lots of that kind of writing here, which is very enjoyable. It's interesting to see beyond what we normally associate certain artists with- the expansion of their capabilities. The loose, pencilled draftsmanship of some of the more traditionally rendered illustration is quite beautiful: bridges and buildings over water. I like that you can go from there to comics, to collages, to cat pictures, and Once Upon A Time In The West parodies.

At one point, I started writing an article about the auto-bio comics Graham does (his humour in these is much more in alignment with mine, than the pun stuff and wordplay), and how good they are- I think there were a few earlier in the year while he was travelling, especially, which made me take notice, and there's more here, often in collaboration with his partner, the artist Marian Churchland. They'll do little one-twos in response to one another, or simply draw each other while gently poking fun, and the affection is palpable- I know it's not fashionable to have sentiment in art, but it's lovely to see- mainly because it works! Their styles complement each other very well, and you get a sense of each, too.  There's even a little pencil Predator strip by James Stokoe, which provides a shot of zany energy. I'm a big believer -and I know some people think it romantic- that passion and sincerity is imbued on a page it elevates good art to another level, where you can have the most skilled, proficient artist working on something he doesn't believe in, and I'm not talking an intrinsic belief, but an access point, and the art will lack something unintelligible... you can just tell when someone's having fun, their level of involvement, and the love for what they're doing- and that's what makes Graham's art special for me right now- he's probably one of the most self-invested cartoonists out there.

I'm not sure how I feel about the amount of naked ladies in sexual positions here. It's understandable considering Graham's background in porn comics and the general magnificence of naked ladies, and while it avoids being exploitative, it does get a bit boring, as with seeing anything over and over. If it were dinosaurs maybe I would feel differently. Possibly I have revealed too much of myself... Another of the things I appreciate is the composition and layout of Graham's pages; he uses so much of a page, filling it with details and things to look at in every nook and cranny, there's such a pleasure to be found in discovering and absorbing each aspect as you make your way over it all; he pours so much into it, yet it's never cramped or over accessorized or that he's trying to fill spaces. I like the softer, rounded panels, the inset boxes, and interposing elements layered with fonts and blocks of sfx. It's a really great book, and genuinely one you can return to, knowing there's yet more to see. More cartoonist's artbooks like this, please. 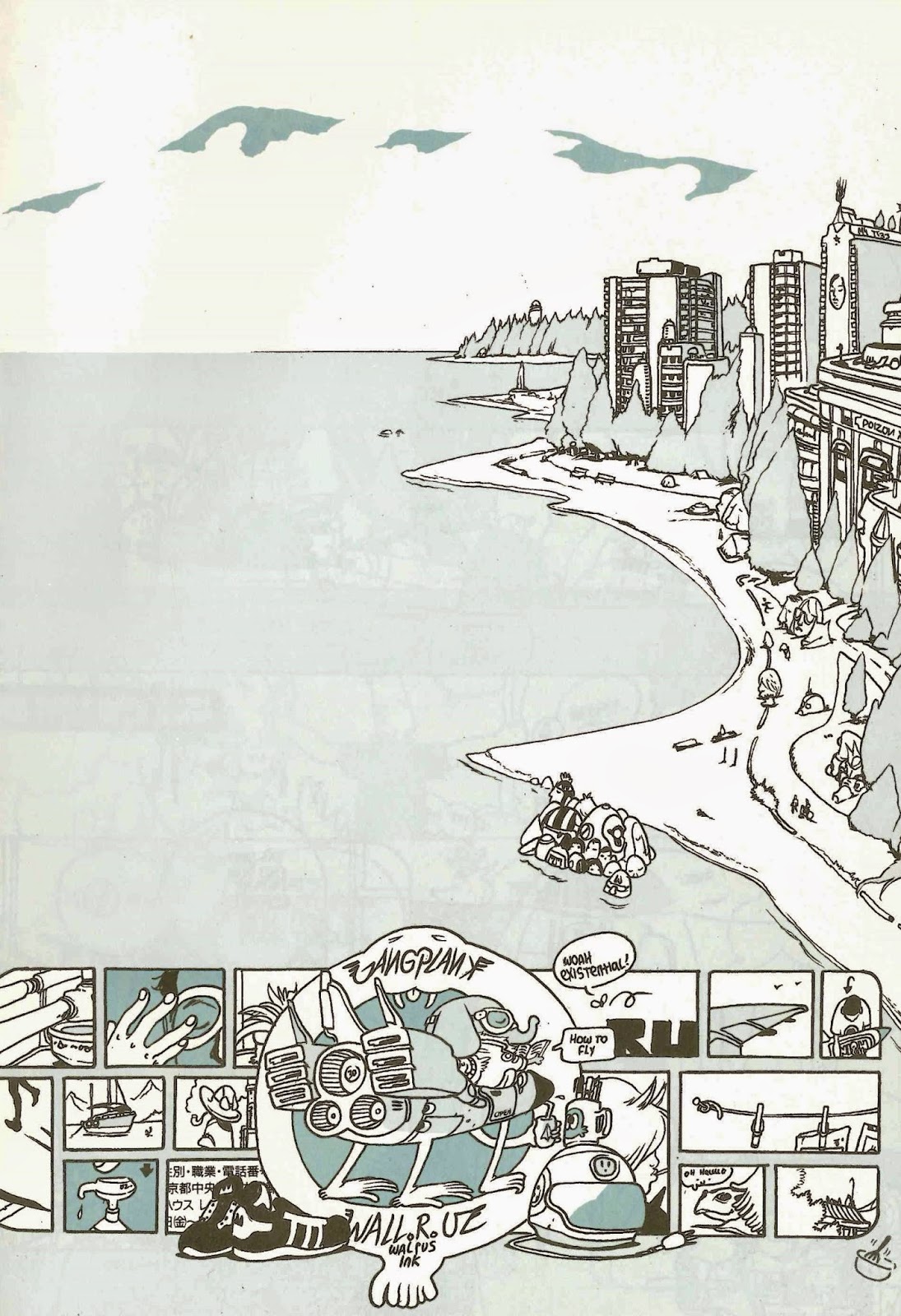 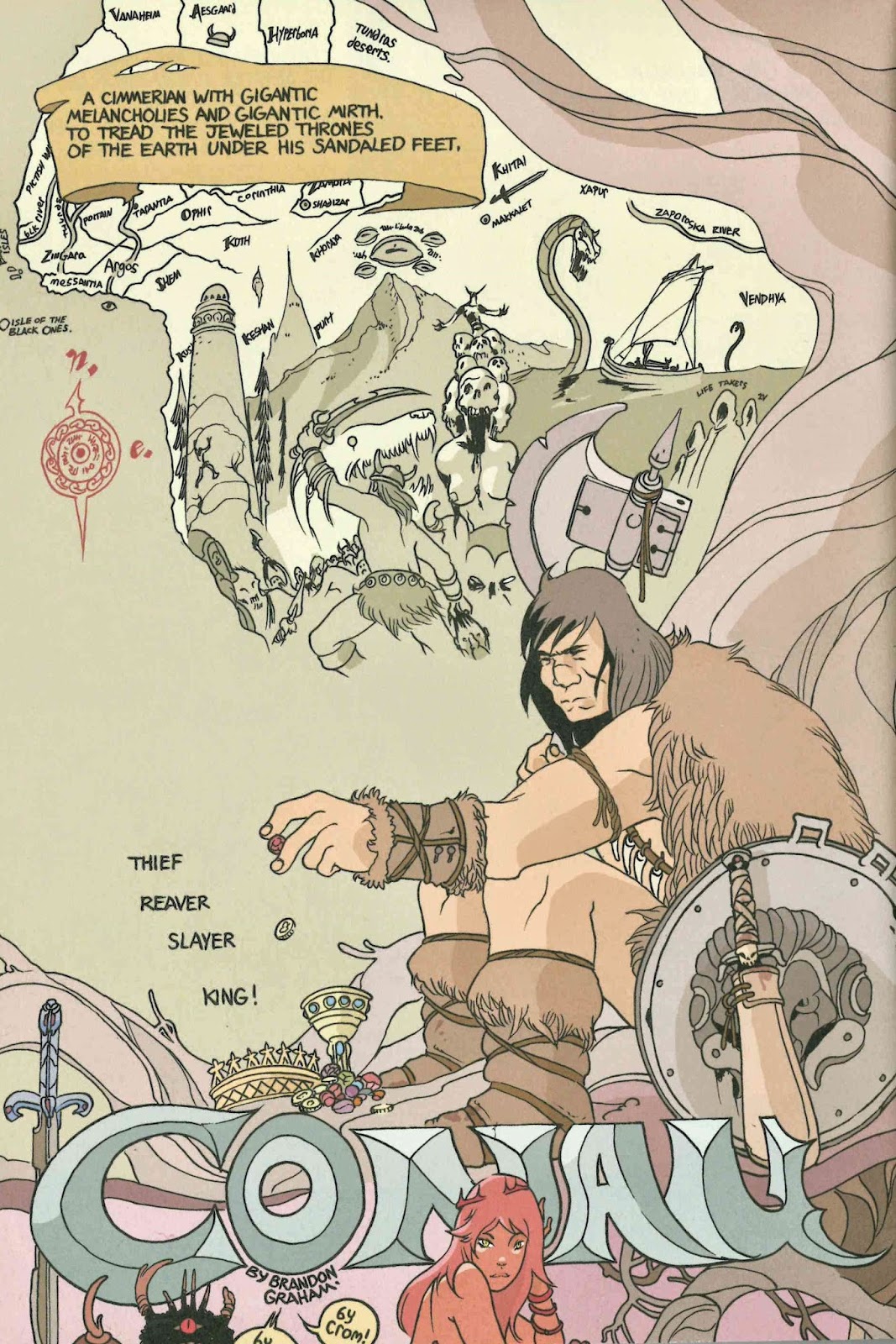 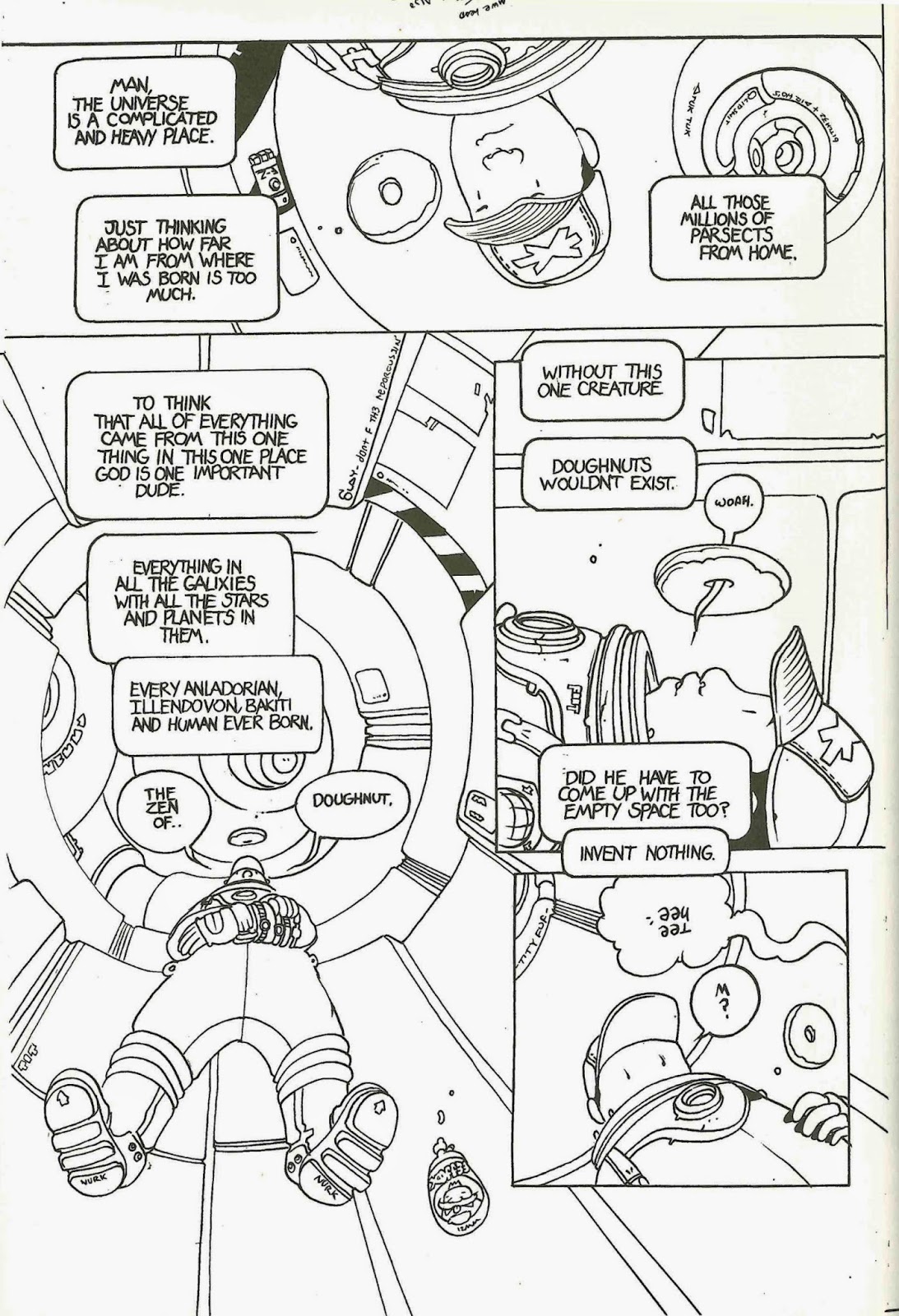 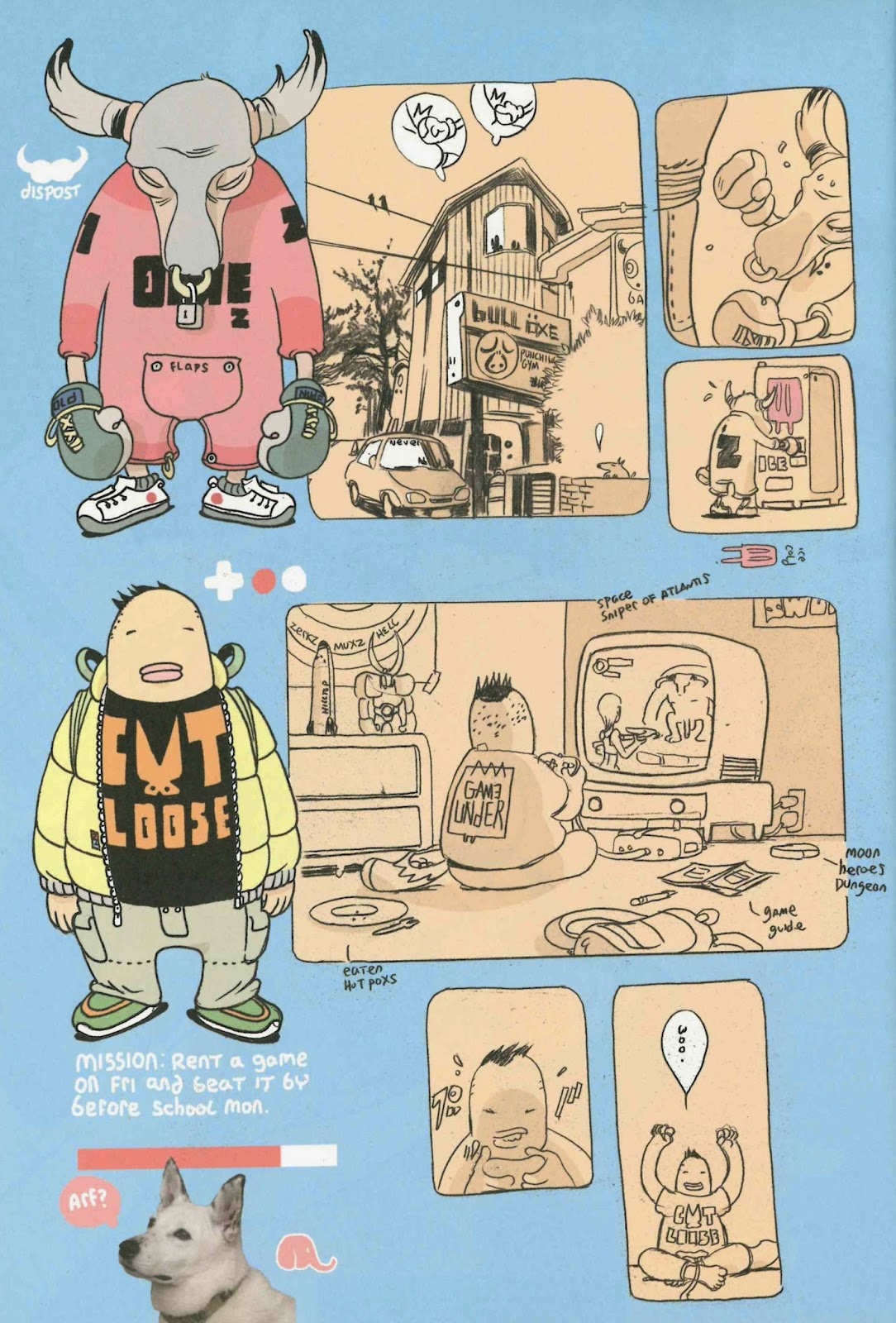 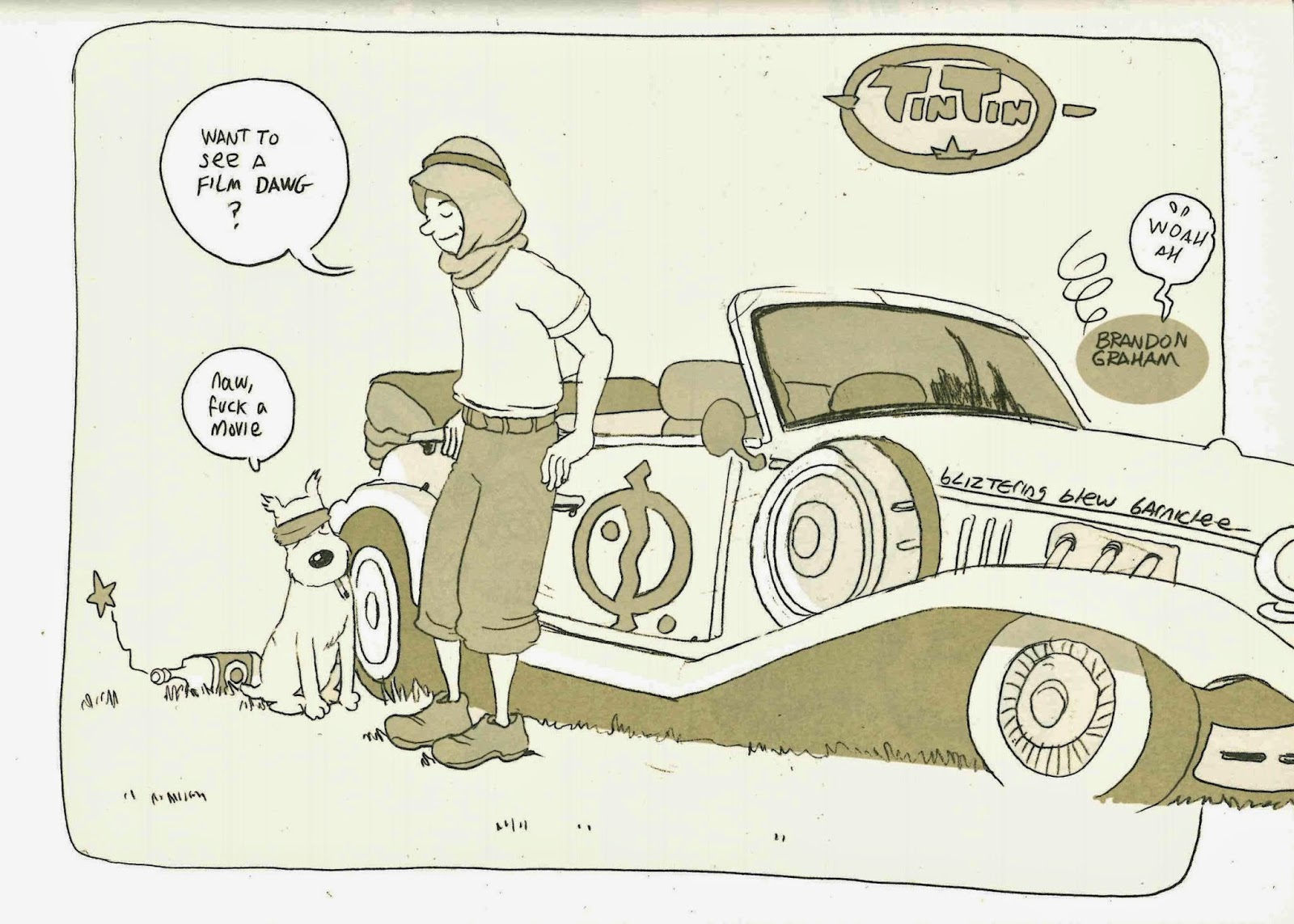 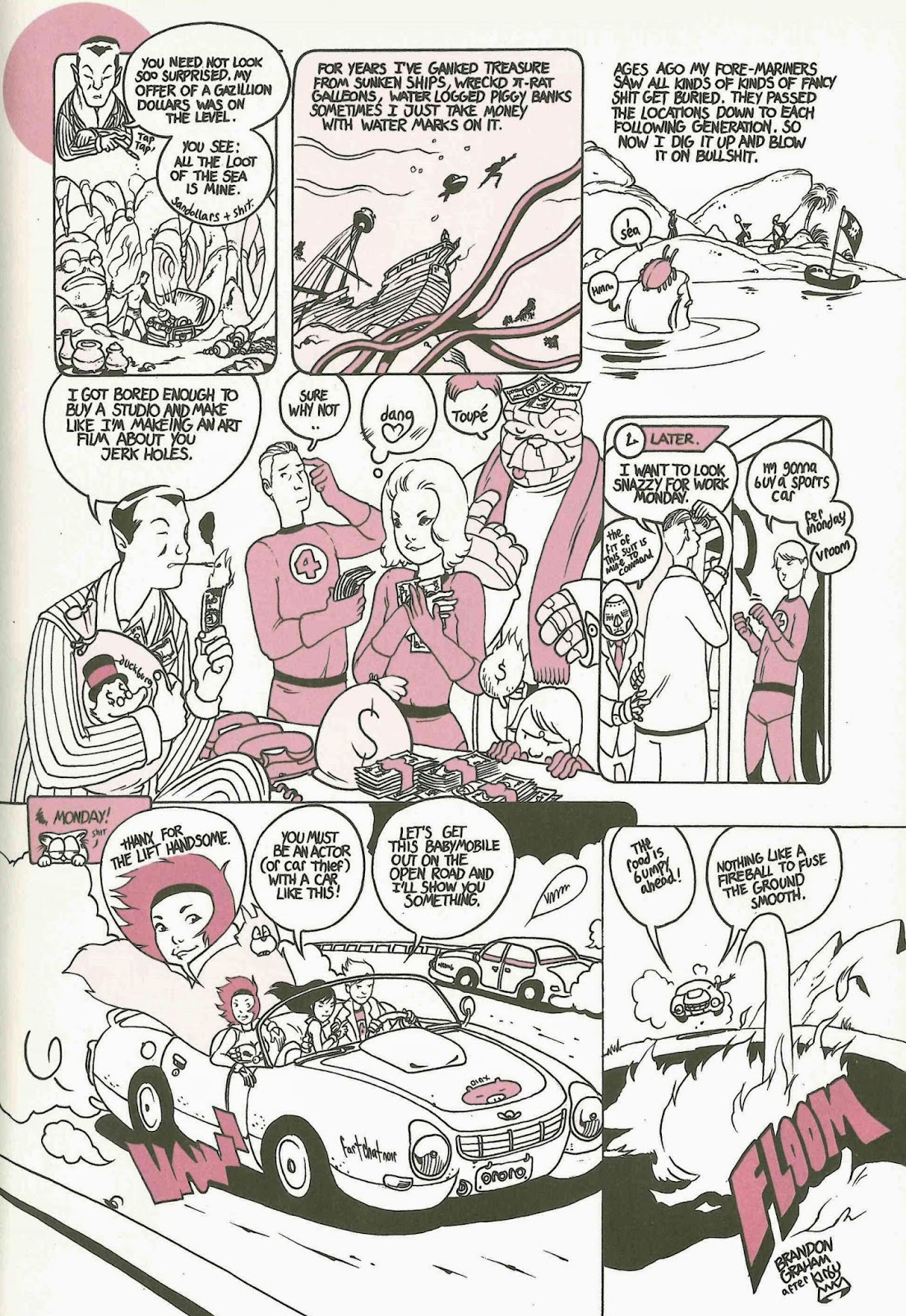