On the mind right now- Thought Bubble is crazy close: 4 weeks away. I'm a tad more nervous about it than usual as I was asked to participate/moderate on a couple of panels this year, and I said yes. Right now it doesn't feel like a stupid decision, but only time will tell. Of course, this would be the year they announce they're going to record all the panels for prosperity and so that they can be uploaded onto the site and viewed by those not at the convention. I'll try not to mumble as much. On Saturday I will mostly be at the OK stall bothering Jared and being crap at selling stuff, and wandering around on Sunday in between my panels, both of which are in the afternoon:

I'm not the biggest fan of panels or indeed, public speaking (remind me why I'm doing this!), but I want to push myself beyond my comfort zone. So, come and watch and listen! The whole programme for this year looks superb, especially the inkstuds panel, hosted by Robin McConnell and Brandon Graham which will have Boulet, Emily Carroll, and Becky Cloonan as guests. As usual, though, there's a tonne of great events lined up, some in partnership with the Leeds Film festival, which will even see Alan Moore in attendance at a screening of his film Show Pieces.

That announcement out of the way, I got sent something cool in the post from the kind guys at Comic Cartel. They've created these new boxes specifically designed to store floppy comics/issues, and they're a pretty nifty design: good-looking, well-made and sturdy, fit on your bookshelf, nice slot top closure which helps keep the comics straight/upright. I should point out: the cream box is the actual thing we're talking about here, it comes encased in the black box for protection. 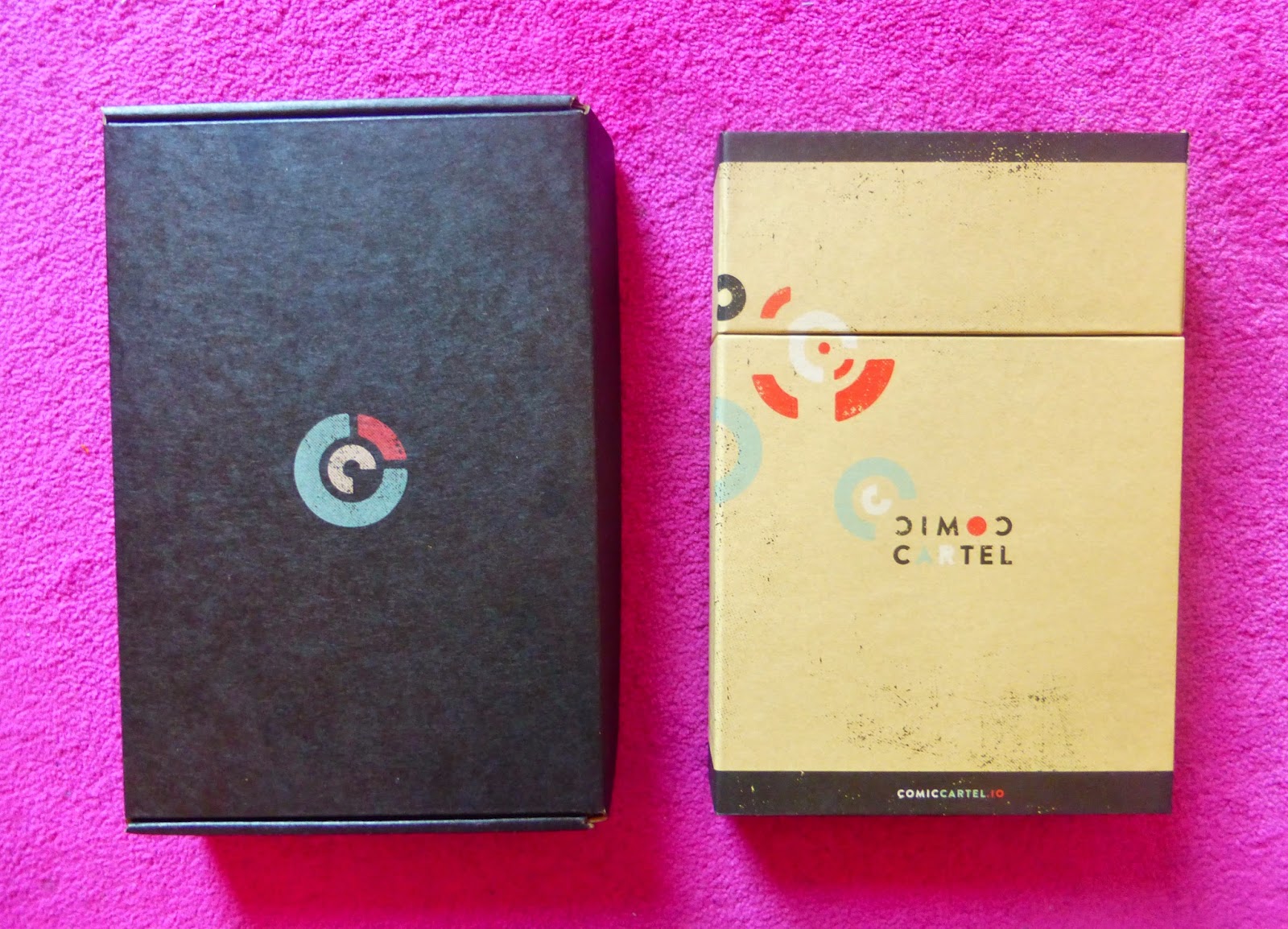 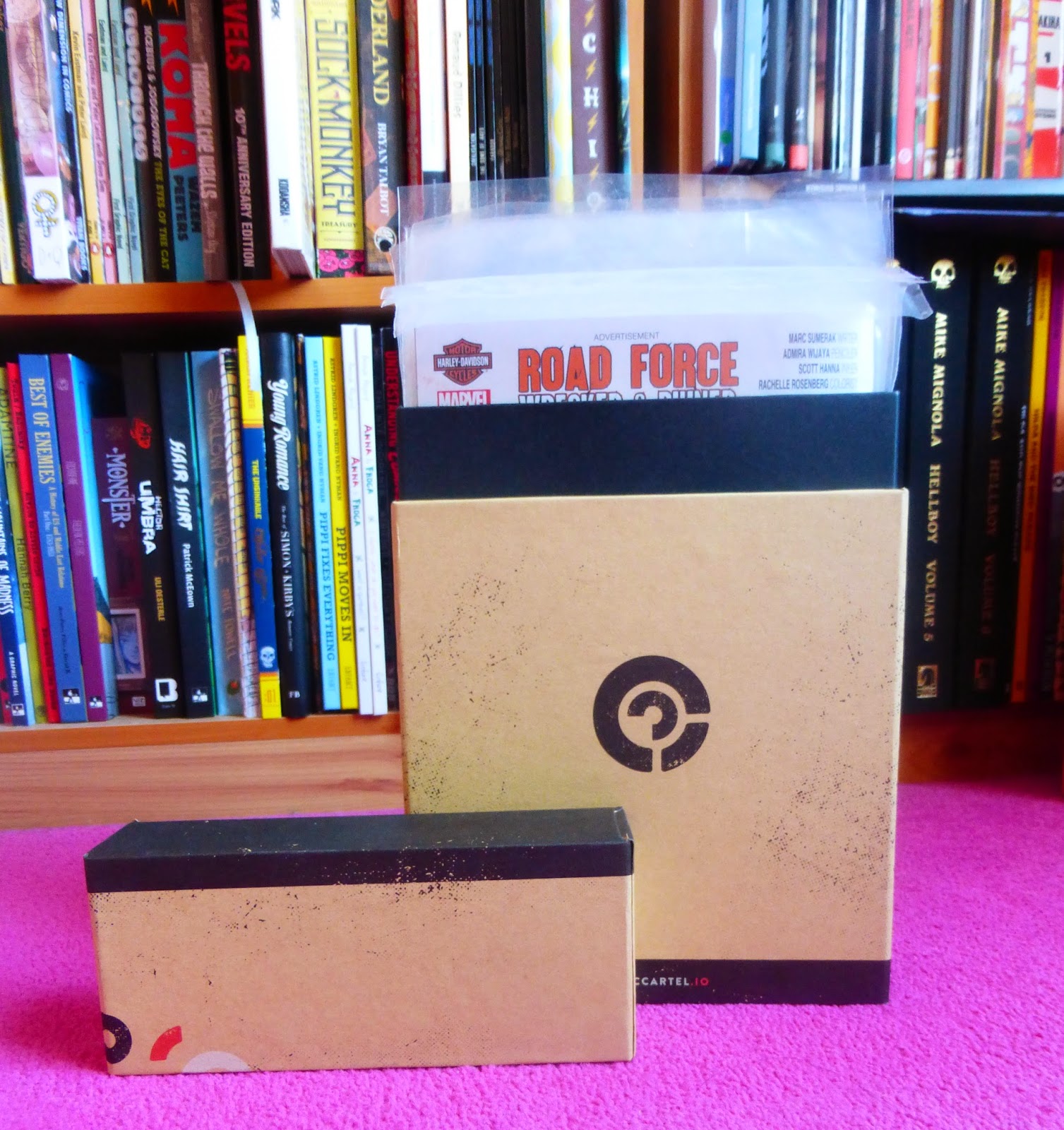 Here's the cream box on my bookshelf. As you can see, it has a ruled section on the spine where you can write what's inside in terms of runs and organisation, etc. It's a good, snug fit. 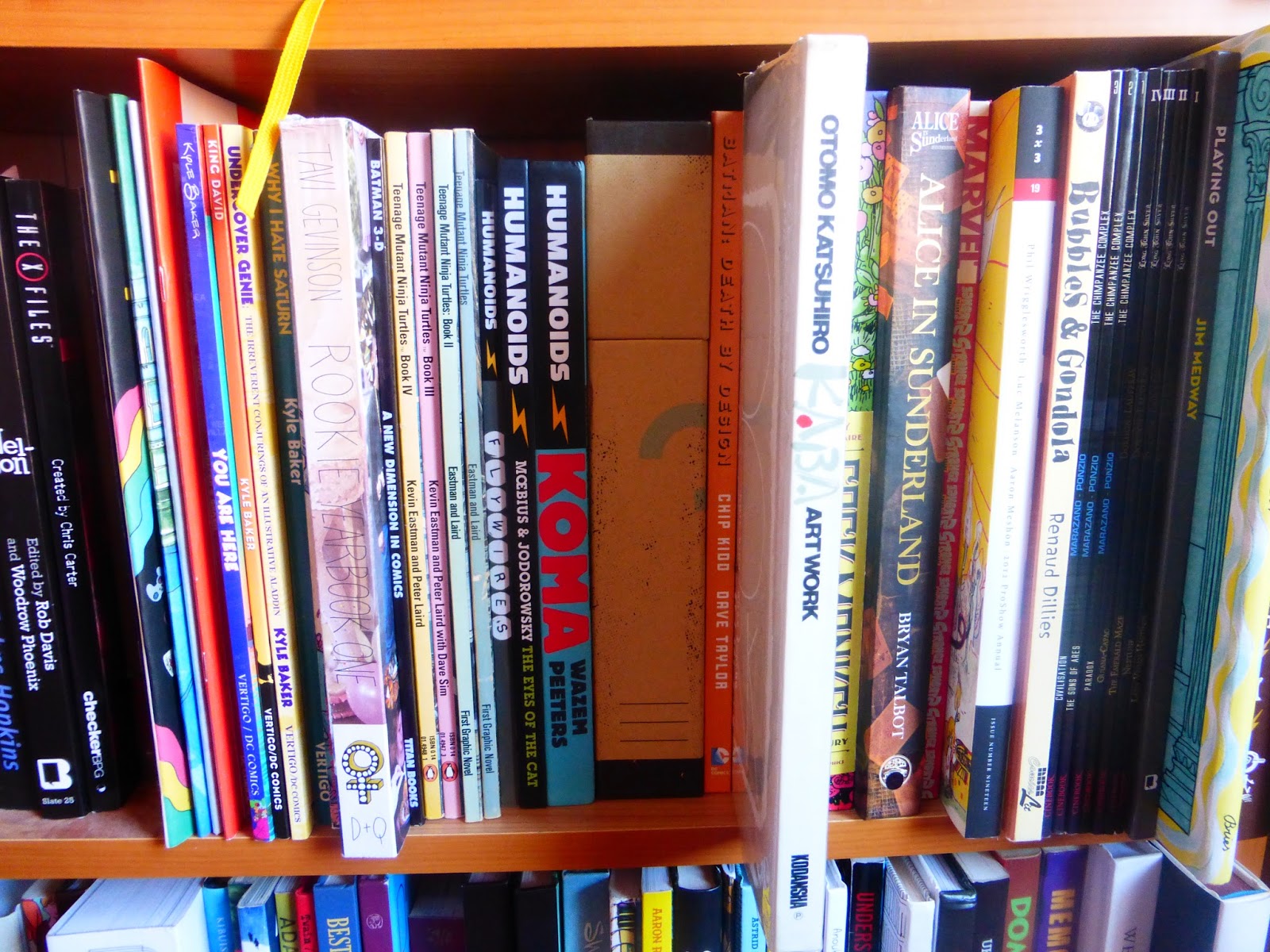 The boxes cost $7.99 each  and are supposed to fit up to 15 bagged & boarded, single-issue comics (not yet tested this)- the price decreases the more boxes you buy. Some might think that a little on the expensive side, but for someone like me who doesn't have a ton of issues, but enough to require some sort of storage system, it's ideal. I don't like long-boxes: I don't have the space for them and I dislike the idea of shoving so many comics in there together. Most of my issues are currently in random, re-used boxes in with my small press and mini-comics on the top of my wardrobe, which isn't great considering these are supposed to be the comics I value enough to buy in issues (paradoxical reasoning, I know) or have taken the trouble to track down. I probably need a few of these boxes and I'll be nicely set. I like that there are people thinking about this kind of thing, you know, more focus on the quality and aesthetics combined with practical functionality- smart. I hope it takes off for them. Below is a picture of roughly what my main shelves look right now (I have a spare bed in my room, which is filled with teetering piles of books which I picked off the floor so I could vacuum it). Thinking of buying another bookshelf this size and then stopping. It'll be nice to have all my issues on hand, instead of having to lug a stool and be drowned in dust 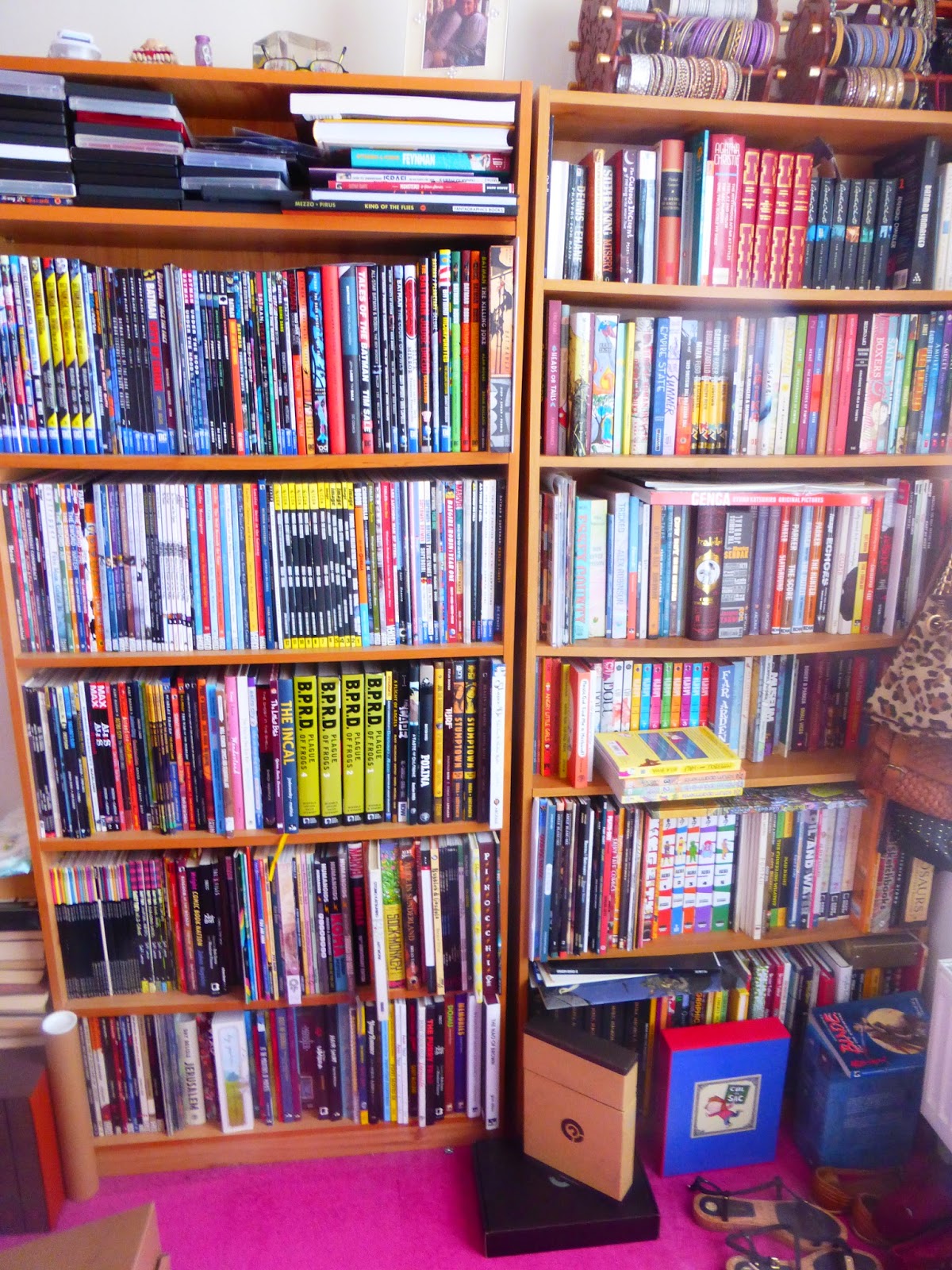 The black outer box is so nice and sturdy, it seems a shame not to put it to use, so it's now also filled with comics: 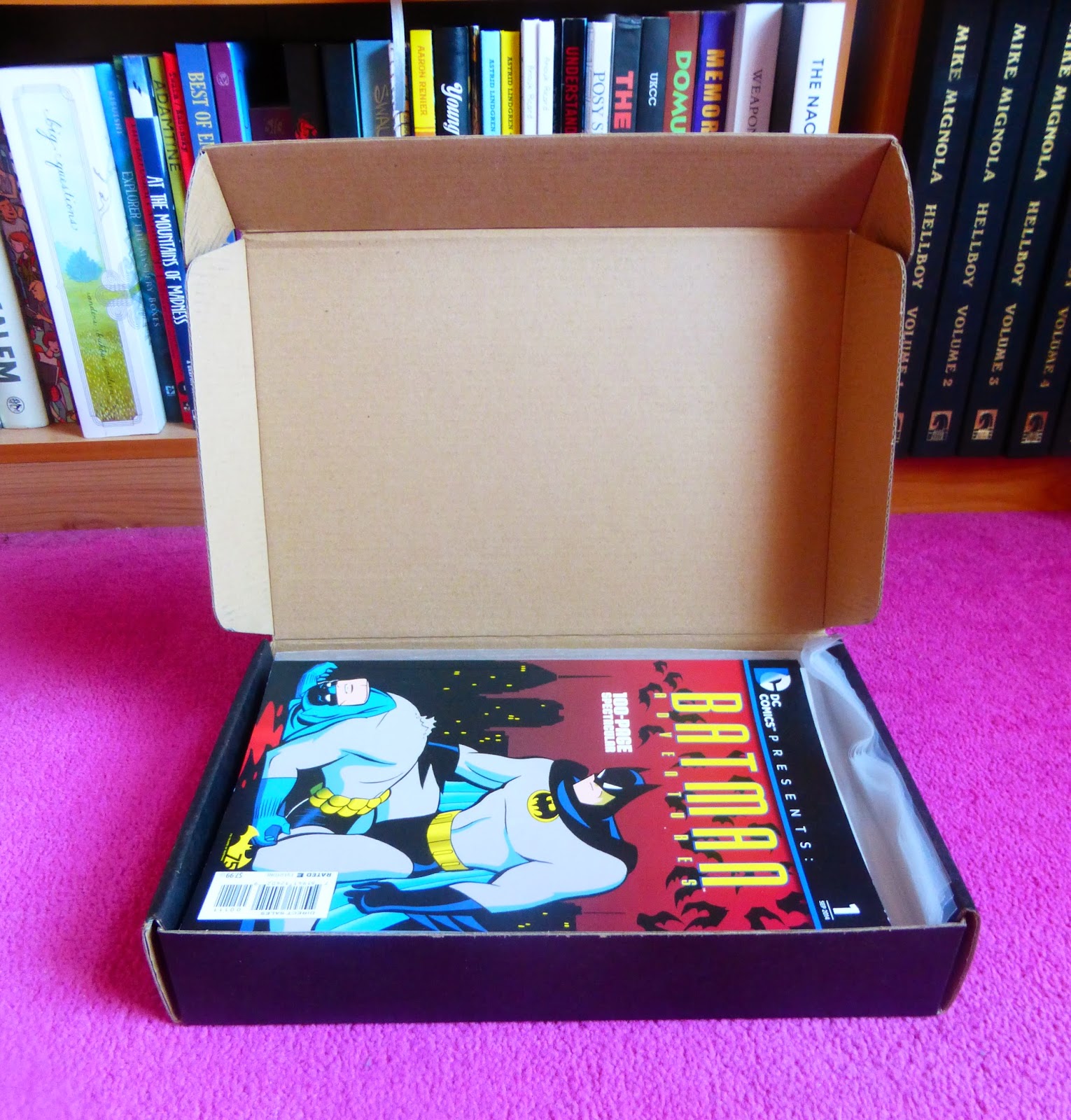 They popped a few things in the box, too, to get me started off- thanks guys! 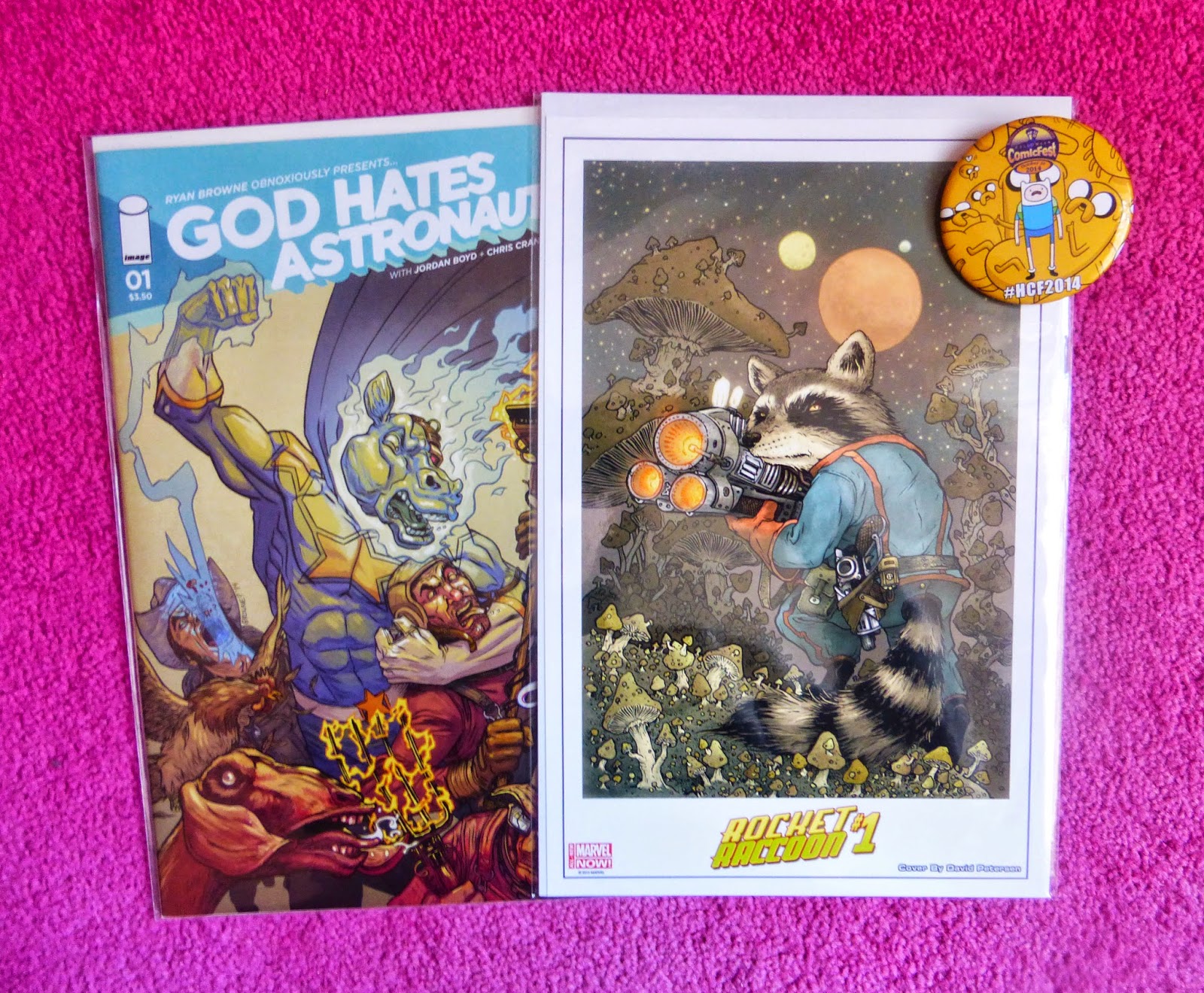 On issues, I started at a point where I was 'nope. never gonna buy issues, expensive, flimsy, less prettier to store,' but I've given in as far as more obscure runs/mini-series are concerned; one reason being the art is so more accessible than in tight trade bindings. Arthur Ranson's and Alan Grant's  2-issue Batman: Tao story, for example is collected in the Batman International trade, which isn't a bad volume to have- there's Frank Quietly's Batman in Scotland story in there too (although that's also included in that big, new Quietly book), but the paper it's printed on is glossy and not very good, which prevents you from appreciating Ranson's art in the same way. Issues are obviously a lot more open in that manner, I guess, in that that is the first and original format for which they're intended, so the comic tends to be geared towards that.

And, of course, some runs are never collected in any sort of book, I'm currently trying to track down all the Batman: Alien stuff -Wrightson/Marz, Edginton/Johnson/- hardcore into Aliens right now: re-watched all the movies and Prometheus, buying the comic omnibuses (which most probably collects a lot of that material), buying the new mini-series from Dark Horse, which have been surprisingly good so far. Tom Spurgeon tweeted about the Cosmic Odysseys series, and I ended up heading to Ebay and buying the four 'prestige format' editions which was how they were originally released -supposed to be a little bit bigger, I think- rather than the trade. So I'm starting to eschew sturdiness of format for what allows the art and comic experience in general to be better. With regards to 2000AD/rebellion, I've got a few of those big (in breadth, not thickness) ass paperback books they used to put out- bigger than A4-: Bolland and Wagner's Judge Death, Ranson's and Grant's Satan, etc. Again, most of these are collected in Judge Dredd or Judge Anderson volumes (the latter can be found in Shamballa) but it's a crime not to own Satan in that large format- you lose a lot of the epic feel and the magnificence of Ranson's art, that effect it has. 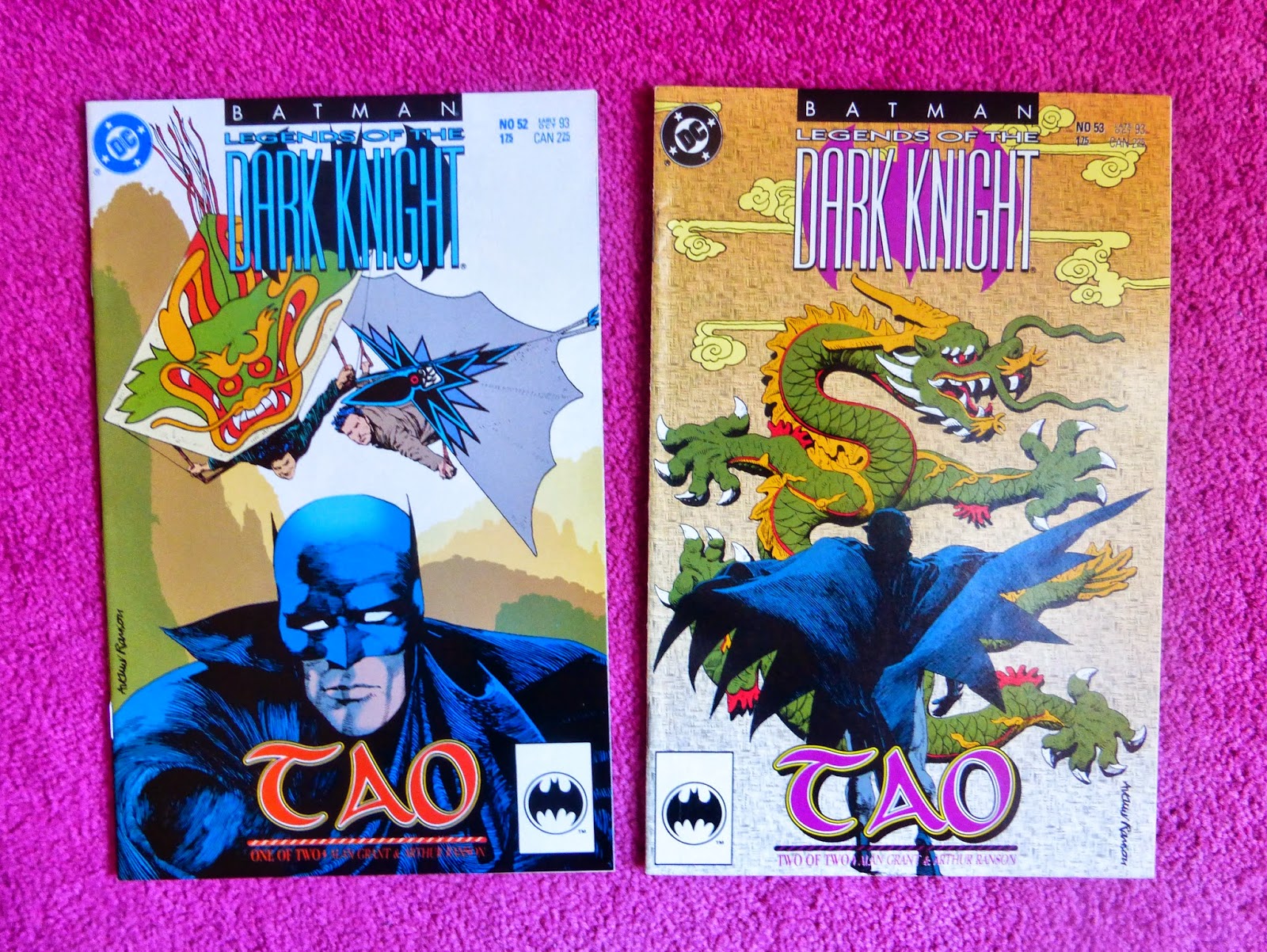 Uncorrected advance proof of Philippa Rice's Soppy, which will be released in January 2015. It's a coloured version, which is great; I don't really understand the practice of sending out advance uncoloured proofs of something that's going to be in colour and being asked to work from that. It's essentially saying that colour doesn't matter- where it makes a HUGE difference to how you read and perceive a comic- I really wish people would stop doing this. Gilbert Hernandez's Bumperhead, which is good, but just so depressing. A life lived in all its banal glory. Hoe important people perceive themselves to be, how self-satisfied they are -even when it's stemming from insecurity- that they end up not sharing anything because nobody is really worthy. I really loved the bit with Lalo and his Ipad- a lovely weird detail. I was wondering how it fitted in, but then I don't think it really is supposed to- it's a neat touch. 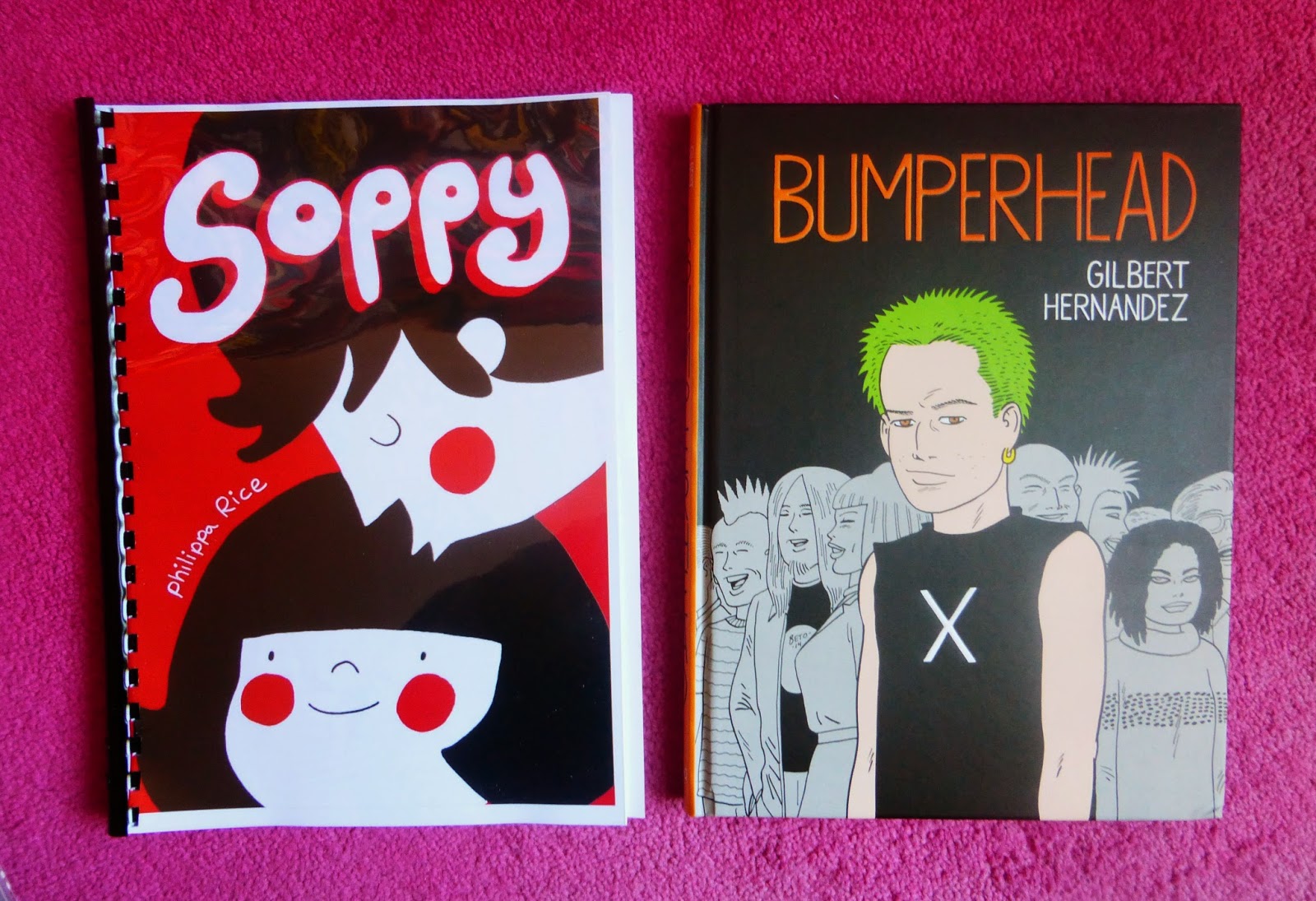 I didn't really care for either of these. Well, that's partly true. I liked DeLisle's little book of cartoons, but it's not the sort of thing I'd buy at all if I hadn't been sent it. They're light, fun cartoons, and I ran through them easily enough, but just not very substantial at all; I can't imagine anybody ever re-reading them, and yes, I know- that could be said of many comics. Cat Eyed Boy has a fantastic cover, and some of the stories about this strange cat-boy creature borne of goblins are really good: weird intertwined with the horrific and an element of guilessness, but the volume is spoiled for me, by the whole 100 monsters storyline which starts out promisingly enough and then stretches out too long (and presumably into the second volume) without being as interesting as the accompanying tales. Worth a look, though. 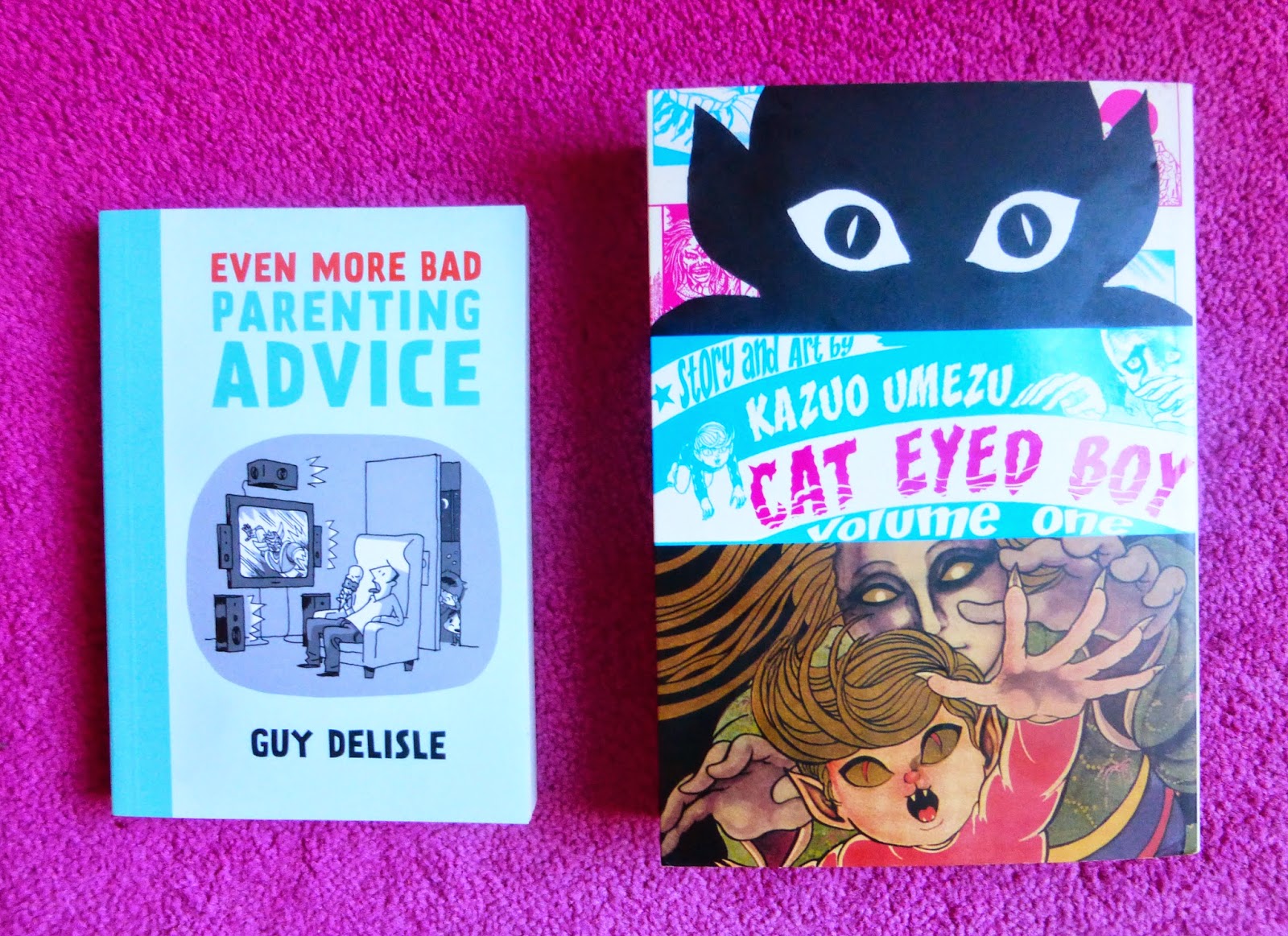