Bibi the witch, and the comfort of the small 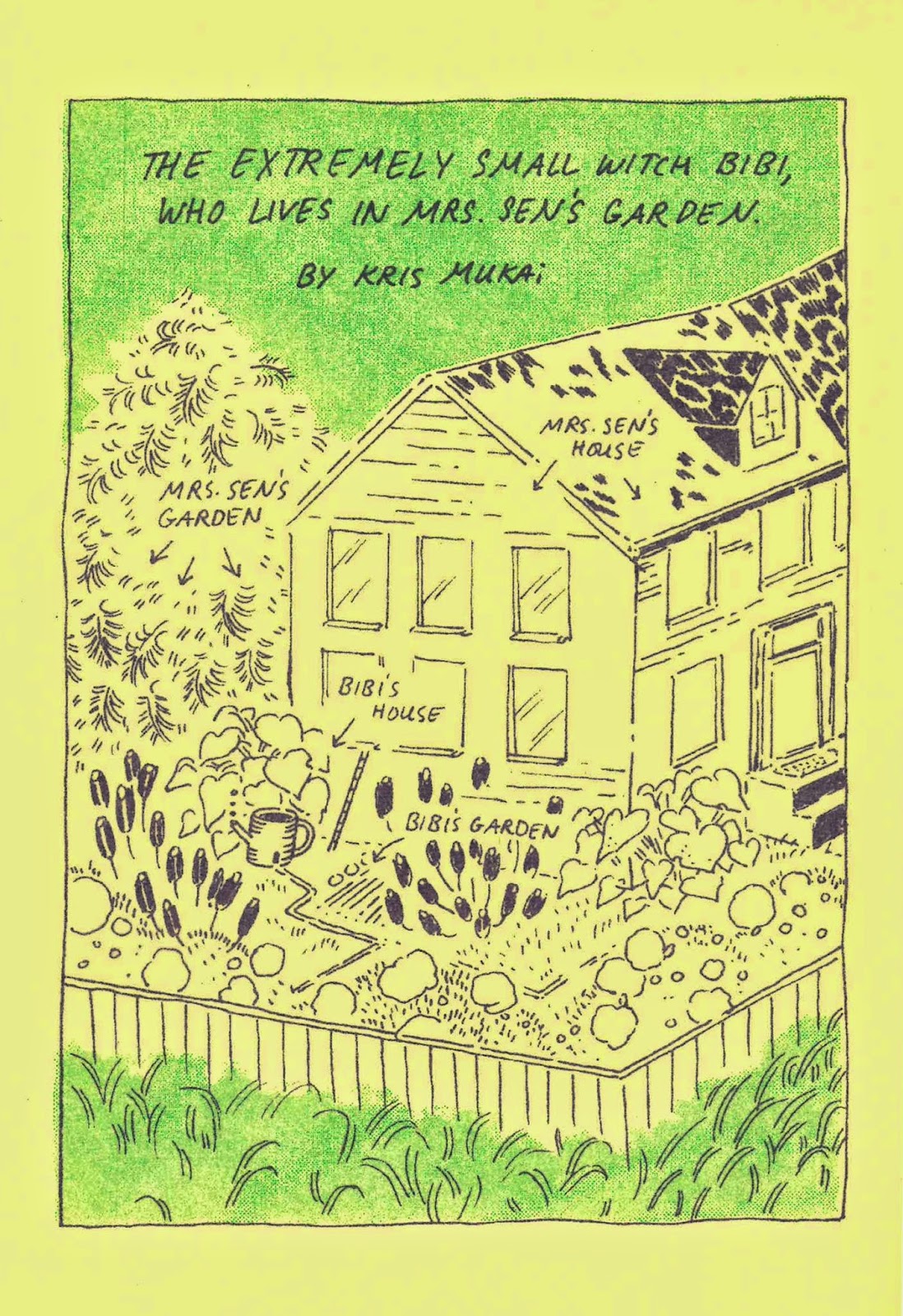 Perhaps today it would be referred to as an aesthetic, or maybe there's a proper term for it, but I have always harboured a warm delight in narratives that depict tiny or small characters struggling to survive in an environment that is hostile to them due to the nature of their being (this, surprisingly, hasn't been ruined by Beautiful Darkness). It's that whole Borrowers, Land of the Giants, Wombles scenario, where they would salvage and re-purpose human junk and use it in innovative ways to make new and useful things. I was fascinated by the ingenious imagination and invention of it all as a child, and still love the concept of creating these cosy and safe spaces, burrowed away in nooks and crannies. Most things seem to appear cuter when miniaturised, maybe because they are more manageable and non-threatening in that way.

Kris Mukai's wonderfully-titled The extremely small witch Bibi, who lives in Mrs. Sen's garden is a variation on that theme. Bibi is a tiny person (and witch- although no witchy occurrences take place in this installment) who lives with her brother Adi in -what is to them- the  huge jungle that is Mrs Sen's garden. It's Adi's 9th birthday, and a celebratory party is planned for later, but first Bibi must go and collect a package of cheese from Mrs Sen, who they have a good relationship with, and do some exchange and bartering with. Adi wants to go himself, but the ladder to Mrs Sen's window is very, very long and steep, and climbs out well beyond the tall plants, making them visible, and it even more dangerous. Adi's still too young to take the ladder, so Bibi goes herself, strapping on what looks like fresh sycamore seeds or similar, to parachute back down from the windowsill to home, but gets blown off-course by the wind and into a sticky situation.

Tiny people in enormous worlds is generally a literal manifestation of the 'big. bad world' notion, with everything becoming a very real danger that must be navigated: huge people stomping on you, insects eating you, the fear of getting easily lost or going unseen. The natural world becomes an attacking jungle, and everyday, familiar environments and objects are transposed into unknown strangeness; a negotiation of real fears explored in a place that is recognisable, albeit at a different angle. The shifting scale provides perspective, too: what is easily surmountable to one, is immensely daunting to another.

Mukai's comic is 6 by 8 1/2 inches and the decision to make make each page a large panel, so that sense of small and big, and scale, is conveyed incredibly effectively is perfect. One of the best aspects of Mukai's art is the expressions she gives to her characters- it never looks like much's going on, but if you look at the faces and the emotion, humour, and strain she teases out simply by drawing eyes at a certain angle, it's great. I like the different things she does with eyes: the characters eyes are big and buggy, taking up most of their face, while the flies stuck in the web look funny the way they're wrapped up tightly with their eyes all zonked out. Mukai's lines are loose, not about precision- there's a real sense of free-flowing instancy in her work. The green colour is an unexpected choice- it doesn't really fit with 'nature' as used here, but works as fresh and interesting enough to hold the gaze.

This was a fun, engaging, and attractive comic- as long as people keep making very good comic using risograph, I will continue to love it with all my heart. On an aside, I'm very much enjoying short, episodic comics like this, and Mathhew Petit's 26652 series at the moment- the affirming goodness and lightness of them- they're not out to be anything, they just are. I hope Bibi gets to continue her adventures. 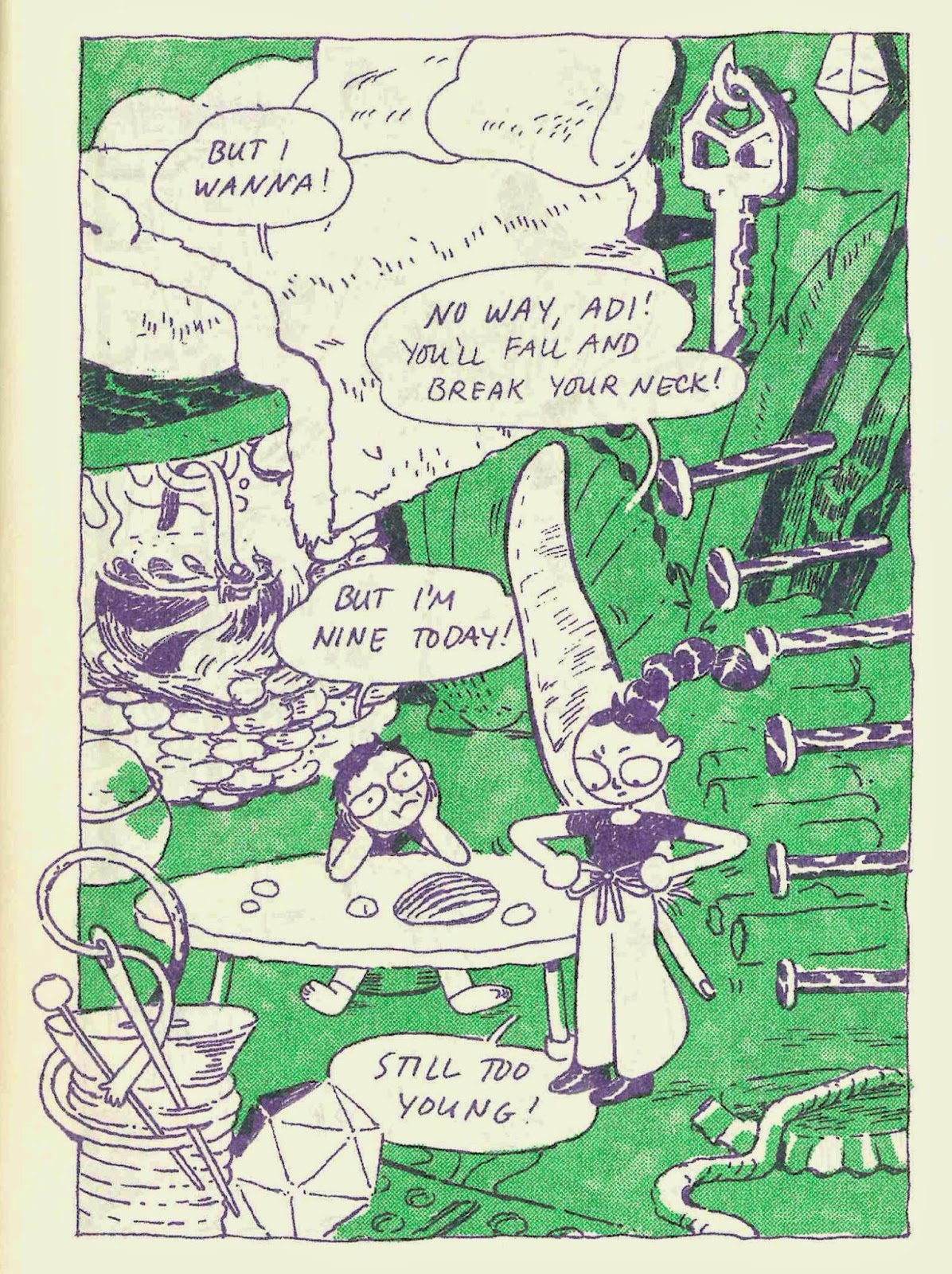 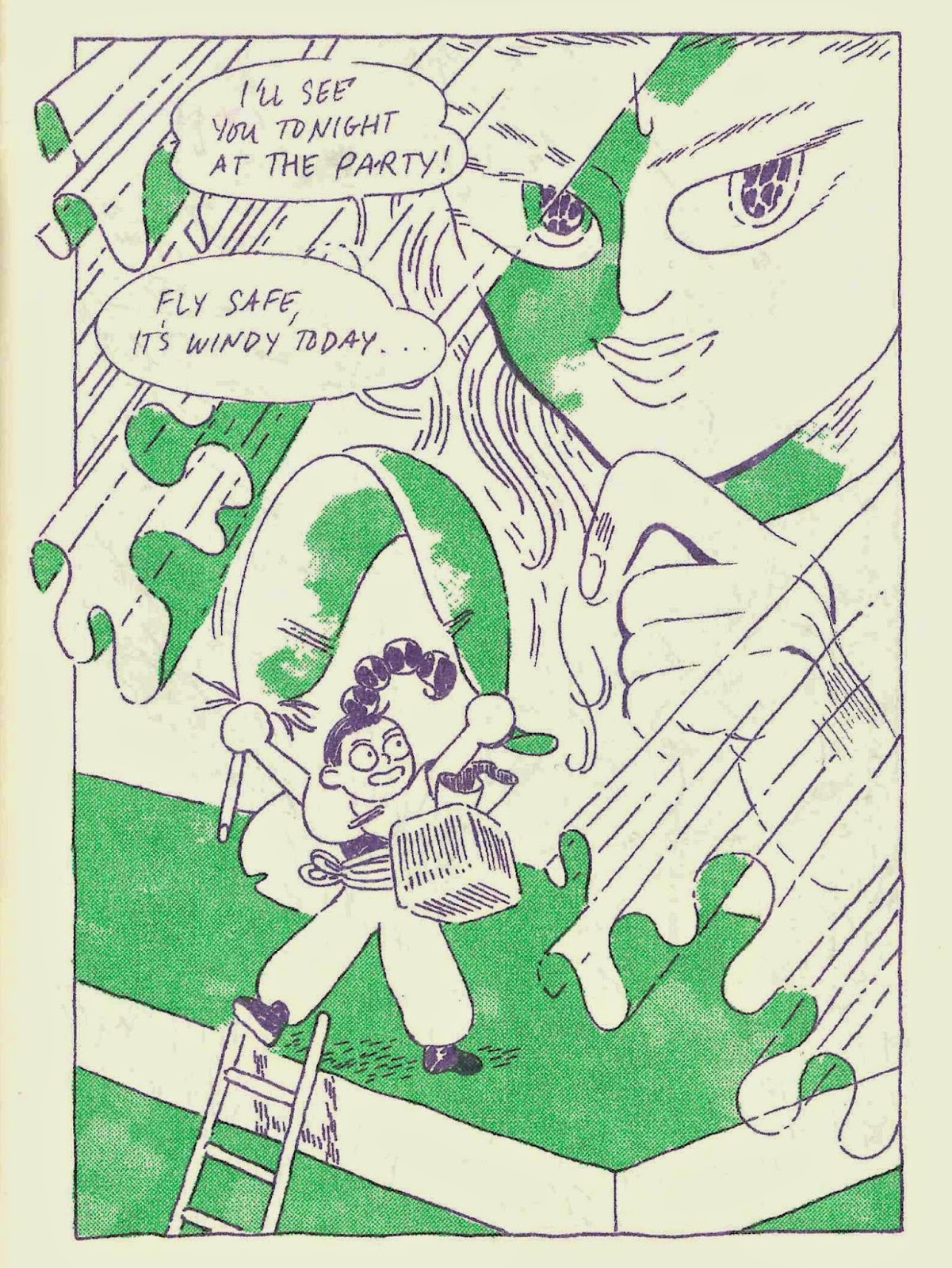 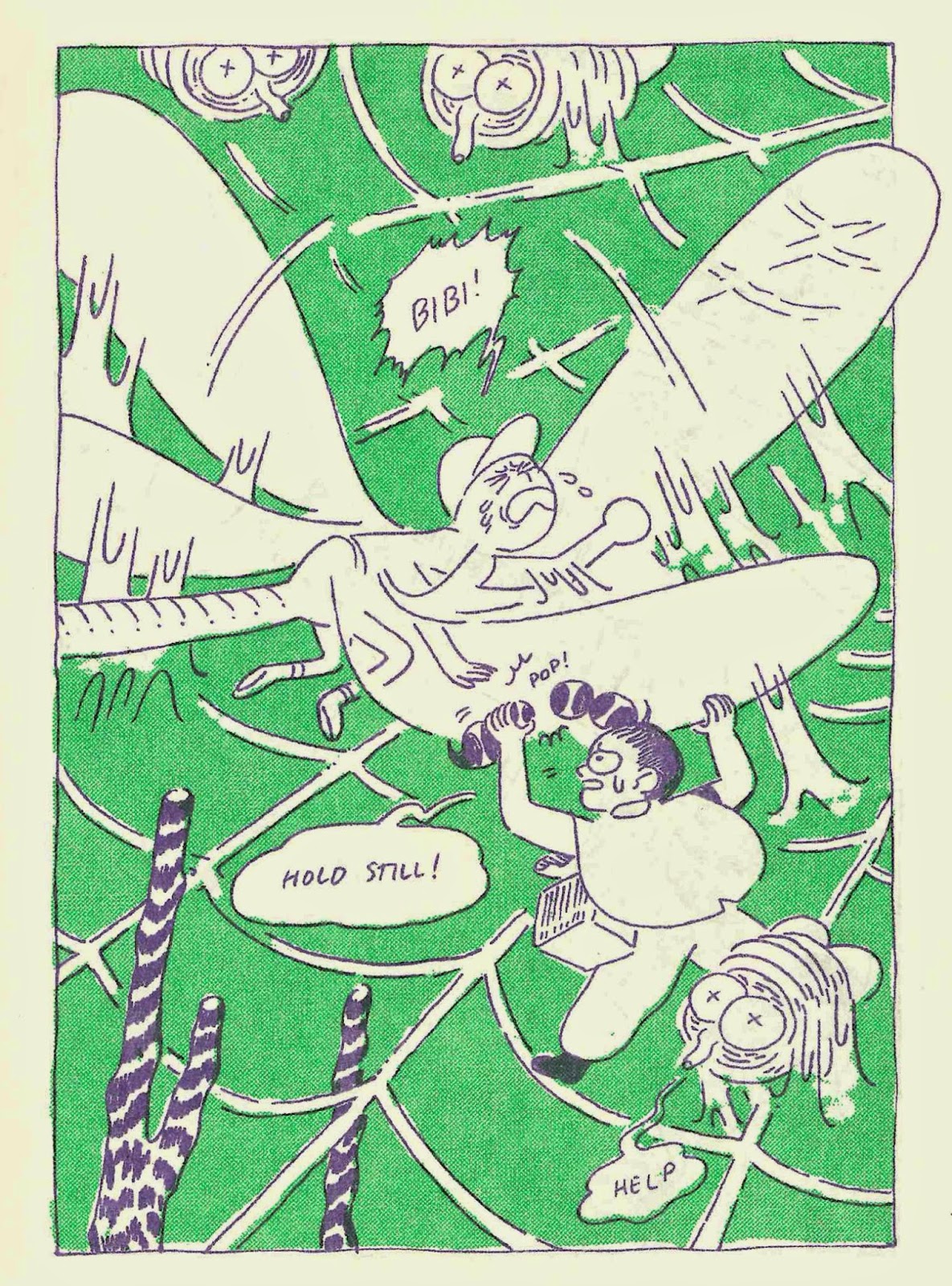