Reviews! Or something approaching them... 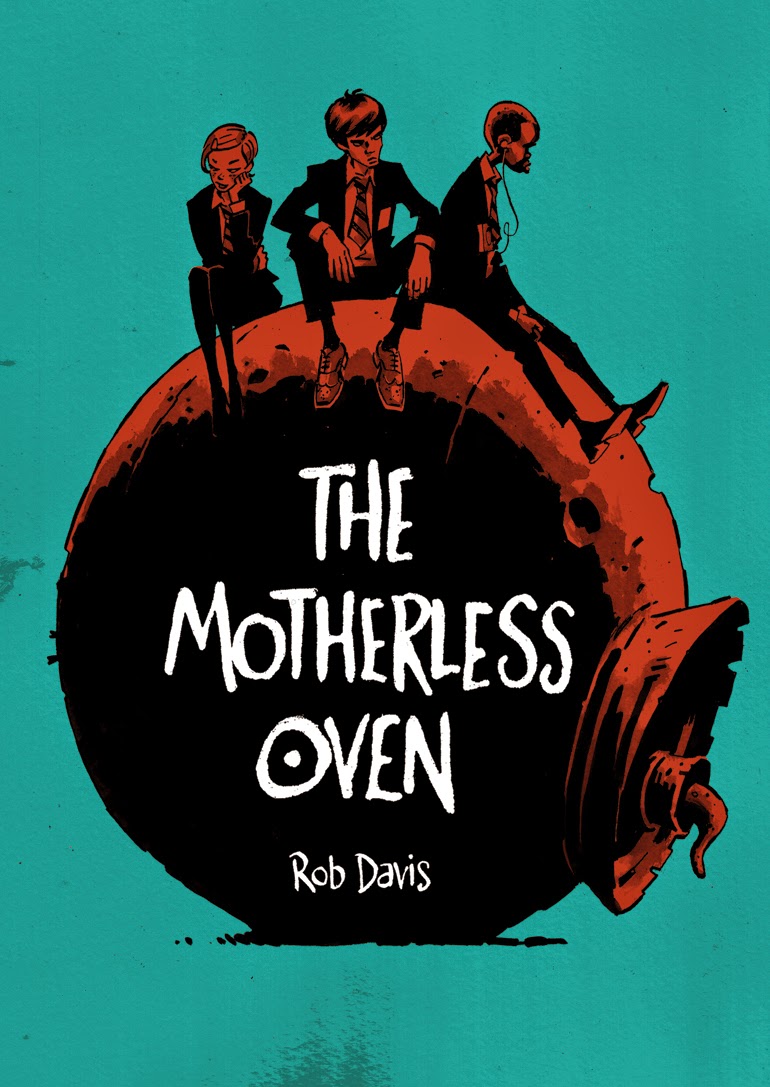 The Motherless Oven by Rob Davis, SelfMade Hero: The Motherless Oven sounds like an incredibly exciting proposition on paper: an original graphic novel by the very capable Rob Davis, set in a semi-dystopian world where children's parents are machines they themselves build, and each child has an approaching 'death-day' (rather like replicants in Blade Runner). It begins promisingly, too- a sharp, spiky, time-piece of a clock centered in inky blackness: 'The weather clock said, 'Knife o'clock.' So I chained Dad up in the shed.' A strong ominous opening, and yet the rest of the book is a jumble of ideas that fail to congeal or make an impact.

The story swills around Scarper Lee, who's mum is a bakelite hair-dryer, his father a huge brass contraption who has to be tied up in the shed, and whose death-day is in 3 weeks time. Scarper's beginning to feel differently about things now his death-day his approaching; he cant' focus and carry on as normal, despite his friends attempts at reassurance and his restlessness is exacerbated by the new girl at school- Vera Pike- who's decidedly odd and seems to have honed in on his turmoil, following him around and needling him further. Events come to a head  when Scarper's dad escapes and disappears and he's coerced into running away with Vera and Castro (who she's befriended from the 'special needs' unit at school) to find his dad and generally try to outrun or get to the bottom of the system of which they are part.

Yet The Motherless Oven never convinces me in its world or its characters. I appreciate Davis obvious intention to create something unique and singular, but I can't help but think the result is affected by that very overt trying- with elements sticking out, rather than woven in bump-free, as part of the tale. Nobody wants a comic that's all exposition; you want to engage, you want to think and participate, for the text to prod you into a reaction, but too much here is vague, affecting the story and its flow. Scarper's motivations are sudden and difficult to reconcile- one day he's hanging with his friends, the next he's been on the run- believable at a stretch when you factor in the problems he's been having with his dad, and a gradual build-up. Vera Pike is blatantly introduced as a 'disturbing catalyst figure,' and not much beyond, appearing and randomly beginning to follow Scarper around, while Castro's portrayal as (and this is my reading) the only person of colour and the slow one with mental problems sits very uncomfortably. Davis may be commenting on the labelling and treatment of people in similar situations, but that intention relies on the effectiveness of the message, which is weak.

One of the things I dislike in literature is when a metaphor overwhelms the story. Ideologies- intentional or otherwise, overt or covert- are present in all work, and  but when it's so loud that your characters, your tale becomes background, it's a problem- it throws off pace and attention, because THINGS ARE BEING FLAGGED AT YOU. Too much feels too consciously inserted. So yes, The Motherless Oven discusses a number of issues: the  fear of growing up, the structure and inadequacies of school, conformity and prescription, the feeling that your parents are so vastly different from who you are, the worshiping of gadgets and technology. Art is about ideas, expression, but they're just never quite formed or articulated here in a substantial manner- things begin and aren't followed up. It's interesting, but those facets are lost in the confusion of elements of a vision that never quite comes together. 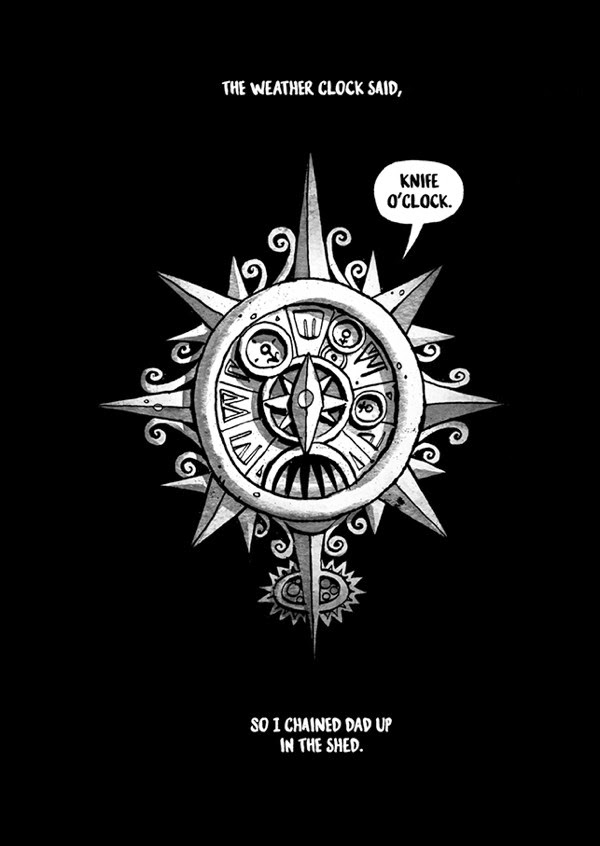 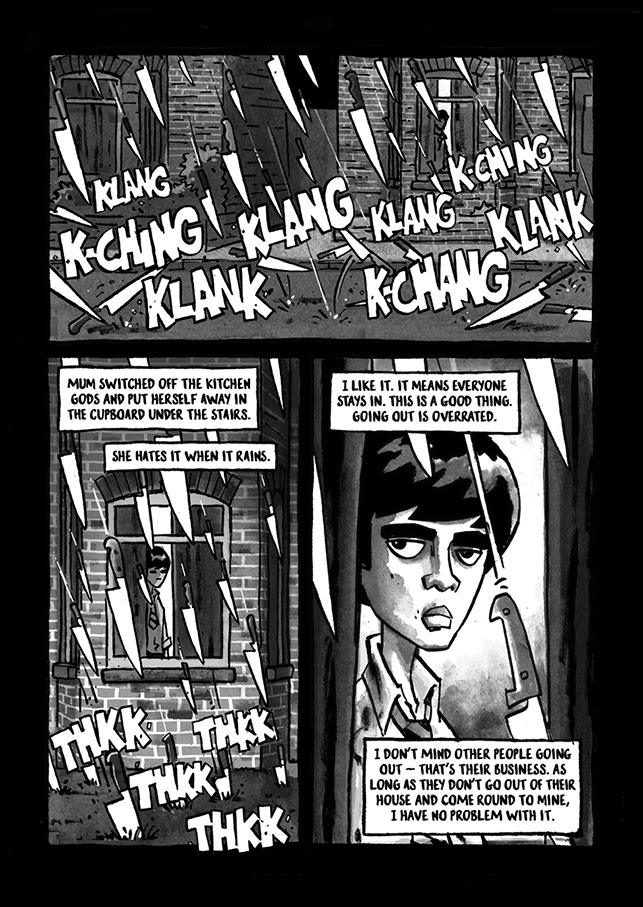 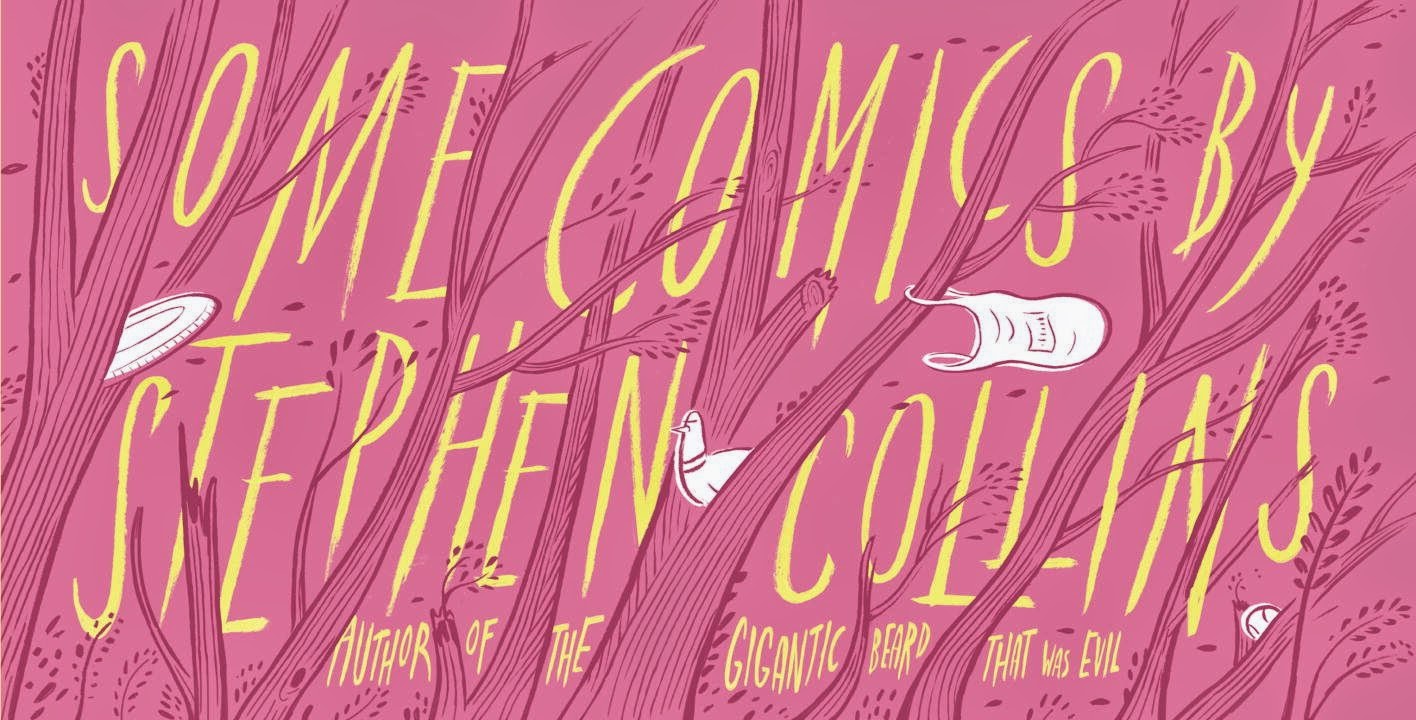 Some Comics by Stephen Collins, Jonathan Cape: Collins draws a weekly strip for The Guardian, and a monthly one for The Prospect, and this is a collection of his work  Often with the Guardian, there's a particular tone and point of address in their strips that carries across from artist to artist, where the concerns addressed are white and middle-class, or with a very literary allusion bent, but I find Collins material more accessible. It is tempered with a more dry, caustic wit, and his approach more inclusive, the subjects more universal, often with a touch of whimsy, even when he's discussing more weightier issues. What this volume highlighted to me more than anything, is how easy it is to take a very, very good cartoonist for granted- I think the ratio of hits to misses in terms of strips here is about 85/15 which is remarkable.

The thing I enjoy most is the real beauty of Collins strips: the detail he manages to fit in, the number and orientation of panels- up to 16 and more- his gorgeous use of colour, all achieved without it feeling cluttered or confined. With Collins strips, each one feels as though you're getting a rich, mini narrative, just look at the two I've included below: the first a smart juxtaposition of a classic children's picture book and its message with a comment on obesity culture and inaction. In the second, the clean colours and lines of the blue sky and the pink and white ice-cream van popping against a not very terrifying depiction of terror being made to toe the line and spend time with his wife.

I love the presentation of this collection- the slimline horizontal strip design of the book they've opted for easily fits into bags to dip in and out of, perfect for commuting, but still solid thanks to the hardback pink and yellow cover. Just an absolute pleasure to read and look at, whilst being witty and sharp enough to get the old cogs into gear- easily ingested but difficult to pull off. I can imagine many a person will be gifted this over Christmas, and they'd be lucky to. It's been a fantastic year for collected volumes of authors works, and this ranks amongst the best. 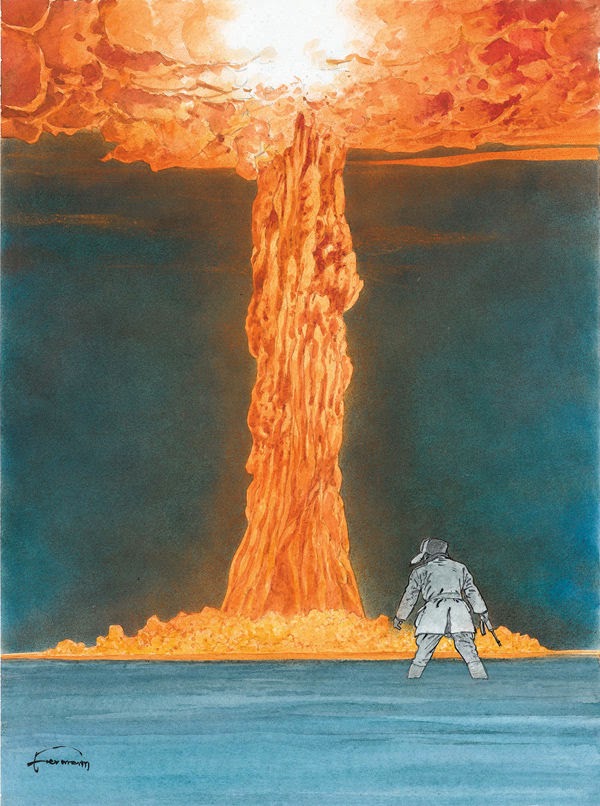 Station 16 by Hermaan and Yves H, Dark Horse: This is the first book I've read by Hermann, the Belgian comic book artist whose Jeremiah was translated into English by Fantagraphics, as well as other works over the years by Titan, SAF Comics, with now being the turn of Dark Horse. Station 16 is essentially a time-loop story that riffs on war and consequence. A small Russian army encampment picks up a distress radio message from a long-abandoned outpost and are ordered to go investigate. The site has been the location of various nuclear tests and scientific research of various kinds, and upon landing, the soldiers find the place empty, but are quickly lost and disorientated as buildings and people begin appearing and disappearing.

Hermann's art is wonderful, both realistically rendered and attractive-the snowy landscapes and the armed soldiers providing an unsettling contrast, which sets the tone for the direction the story takes.  It's all very much like an episode of the X-Files, with human experimentation and zombie perfect soldiers thrown in- that may actually make it sound better than it is. It's solid, but slight- a conventional narrative and nothing that hasn't been told better before. No great character work or the like to be found, no exploration of ideas, just very passable entertainment, easily forgotten. I bought this for £14.99- it's a hardback and 56 pages in length and felt I didn't get close to my money's worth- I just think that you have to offer better value all round when you're charging that much.

I've honed in on page length, and that's disingenuous- if a comic's that good, it wouldn't matter (there are so many comics that are a similar length and much richer and more satisfying)- the problem here is a) it's standard fare, with which nothing inventive is attempted, and b) if you are going to go ahead and choose to tell this story, you could do so effectively in an issue (and in fact, the closed time-loop is something I'd just read to much greater effect in Dan Berry's 24 hour comic, Nicholas and Edith) Presumably the hardback treatment is aimed at existing fans/collectors of the author's work, but a paperback would be a so much more accessible price point and allow curious readers (like myself) to pick such books up easier, and not feel cheated when they turn out to be below par, especially when you take into account translations aren't generally given paperback treatments. You only need to look at Cinebook to see it is very much doable. 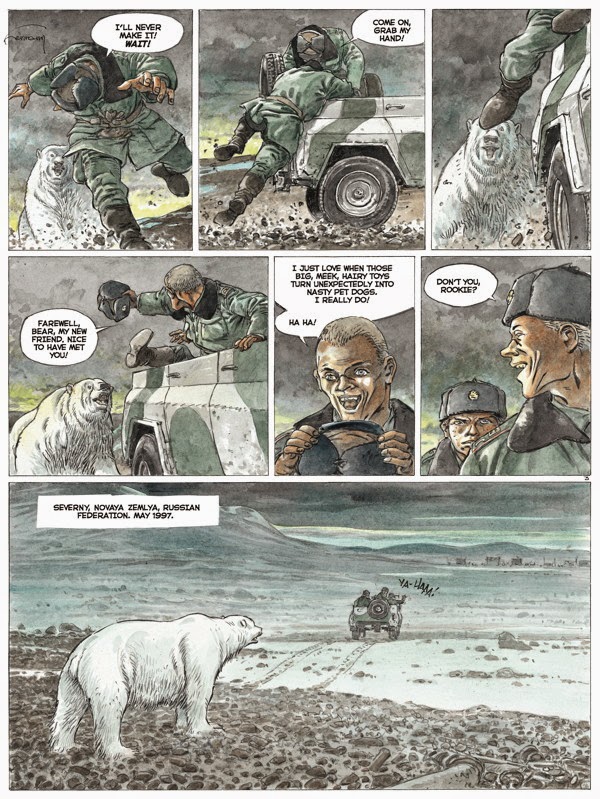 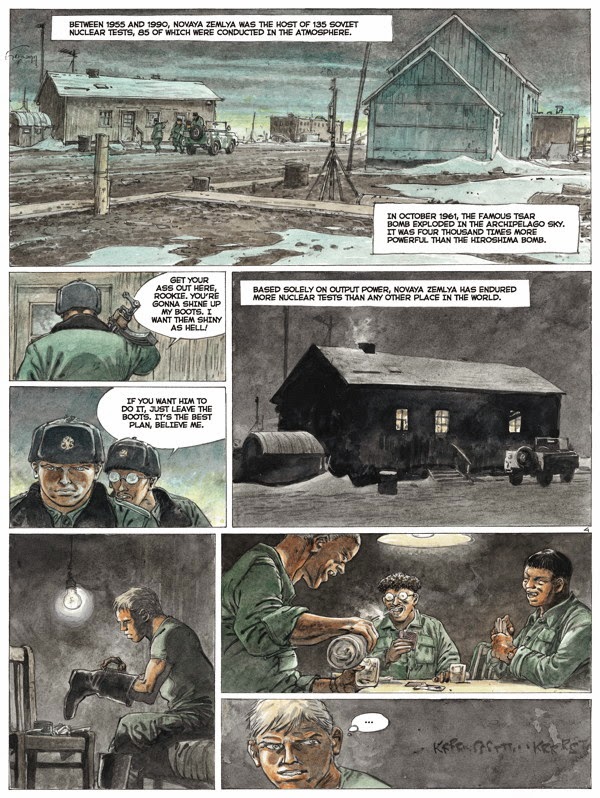