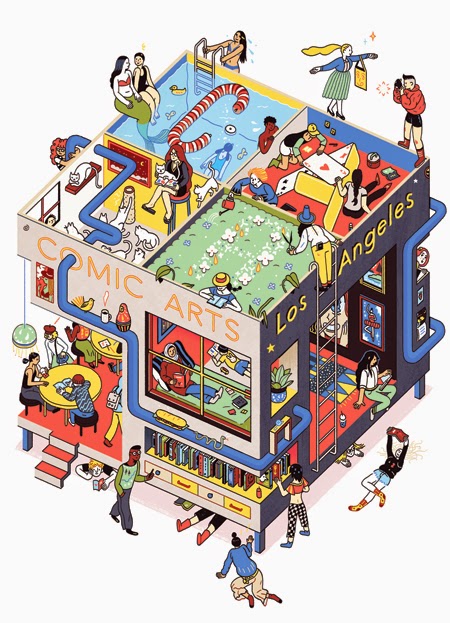 New comics shelfie time. I was going to post my own shelves and books today, but luckily you have all been spared that fate because the excellent Sophia Foster-Dimino is here to share her collection and it's an infinitely better experience. You may know her work from the Google doodles, where she worked until late this year before leaving to focus on comics and illustration full time (yay!). Her style is sort of an amalgamation of formalist and ligne claire, her work smart and thoughtful, and she is frankly one of my favourite artists working right now: case in point- see the superb poster she created for the Comic Arts Los Angelese festival, above. I love seeing people's shelves and storage and books and comics and art, but it also gives me major envy, and that's especially true today after seeing Sophia's Beaute prints folio by Kerascoët. But over to Sophia:

'Roman (Muradov) and I share a 300 square foot studio apartment in a basement in San Francisco. We do not have much room... but we still have a lot of comics. We're constantly at max capacity, even after selling tons of old books earlier this year. I dunno what to do. Probably nothing – after reading through everyone else's shelfies I feel pretty validated in my hoarding so I guess I will never change. 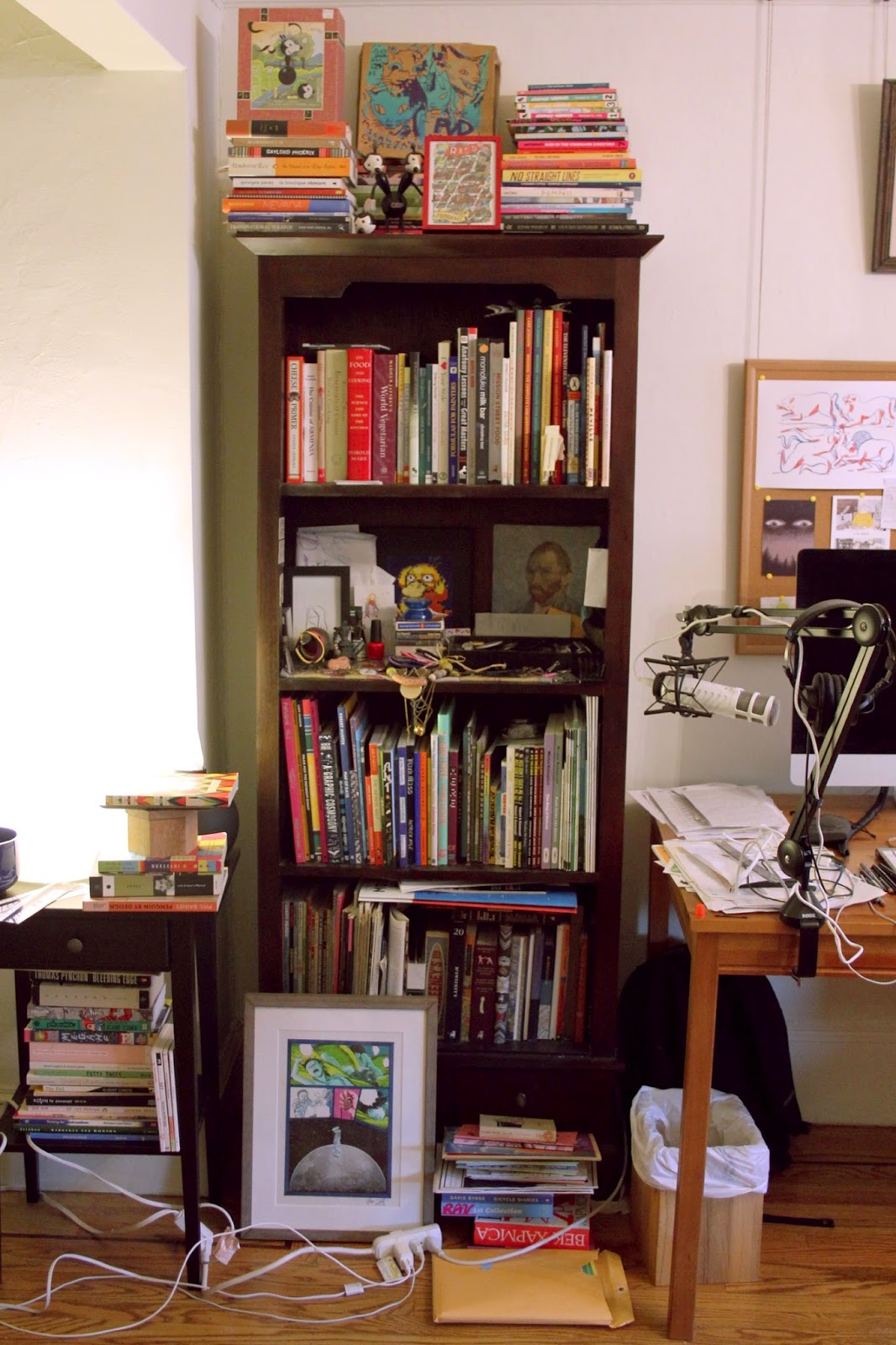 Here's shelf #1, near the bed. The bedside table to the left (with the lamp as bright as the sun) has our "currently reading" stack, which for me includes Megahex, Sunny, and some CAB zines. Notable on this shelf: at the very top, a pizza box designed by the wonderful Mickey Zacchilli. Grabbed this from Nice Slice in Providence when I was maybe a junior at RISD, in 2009 I think?

Forgive the crude photocollage. Stuff on top of the case is unsorted, top shelf is like food/cooking books and some kids' books (AND MOOMIN!!! the most important comic book), followed by an egregious vanity shelf filled with my earrings and garbage... then there's some French (and Québécois) stuff, plus Picturebox, Koyama, Nobrow... even D&Q DeForge books go in the Koyama section! Bottom shelf is periodicals – mostly a million McSweeney's I haven't even read 'cause I'm a fraud. I got into McSweeney's from being a Ware completionist when I was 19 or 20 and then I had a subscription for a few years but I cancelled when I realized I would never have time to read them all.

That pile on the floor is stuff from CAB that may never find a dignified home because we have too many dang books!! 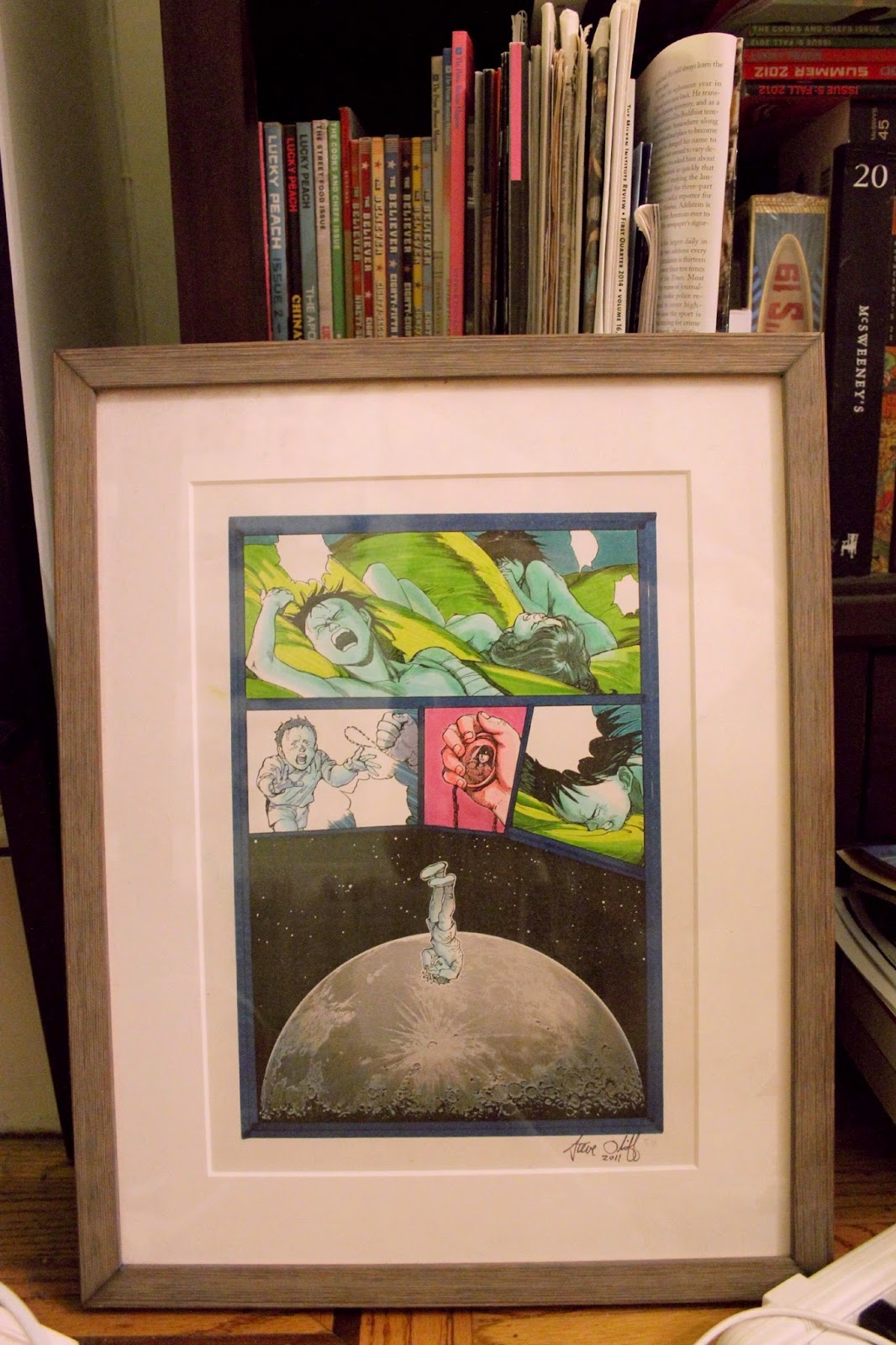 Folks who have been to comics shows on the west coast have probably seen Steve Oliff and his Akira color guides. Ryan Sands wrote a Same Hat post about them once upon a time. I bought this one at APE many years ago, I was rifling through a stack alongside some guy and he was trying to decide between this page and another page, and I was like, hovering breathlessly over his shoulder praying he'd go for the other one so I could grab this one. And he did. And I did. So... good! Despite it being one of my most prized possessions I have not gotten my life together enough to hang it on the wall. 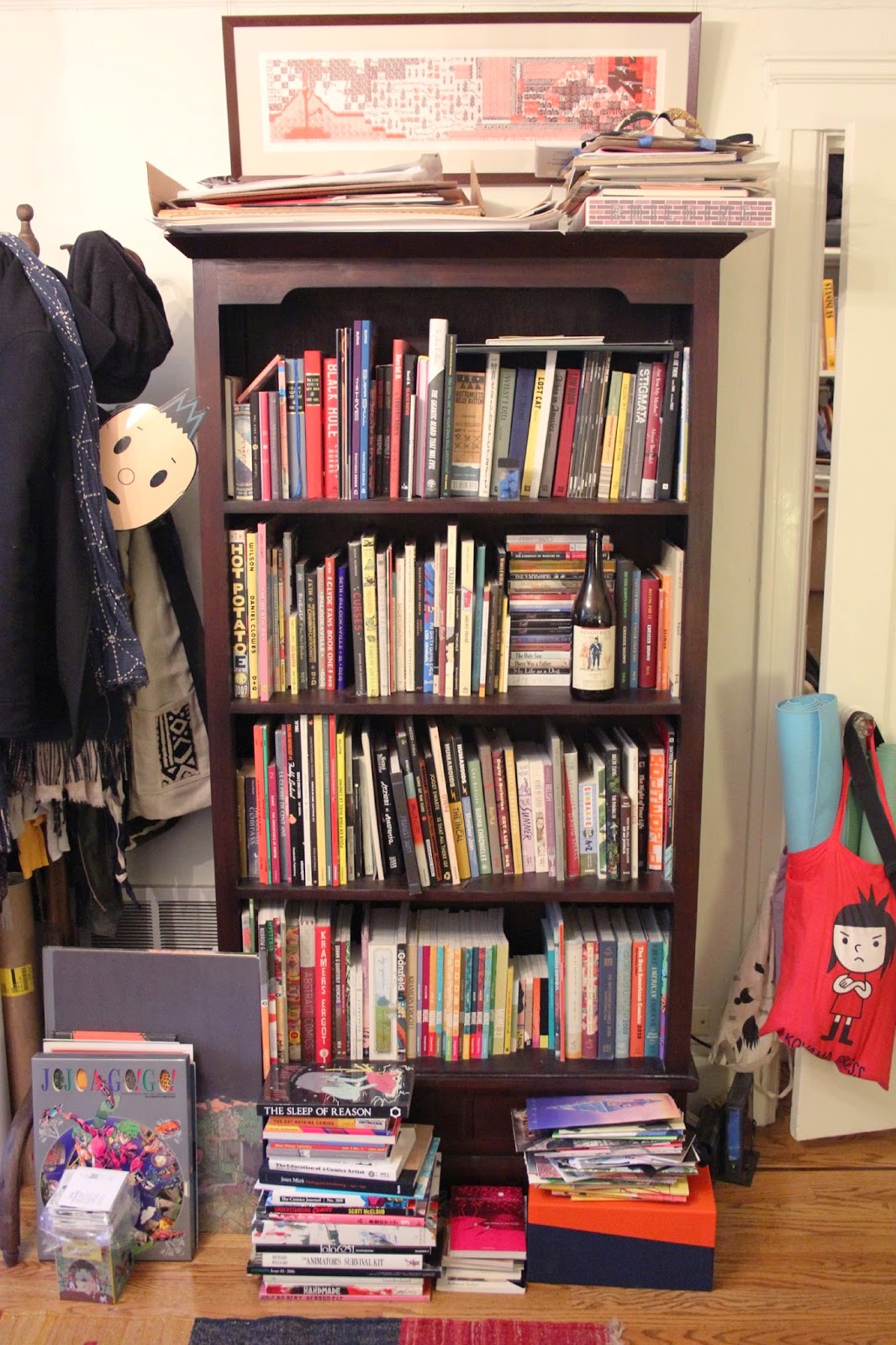 Shelf #2. That beautiful silkscreen at the top is by local collaborators Most Ancient. I adore their work. This piece is called "The Map of Neighboring Territories III." 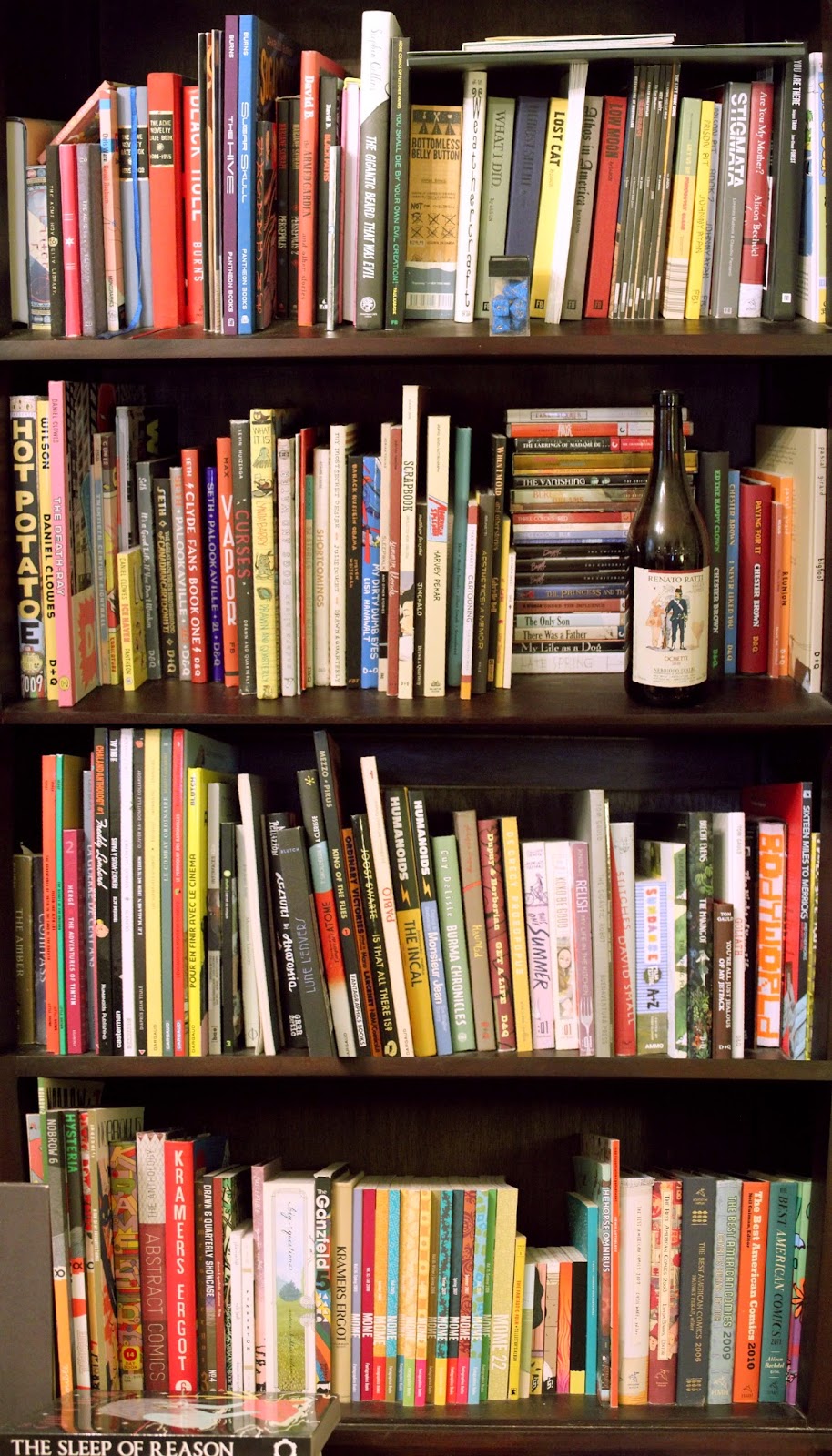 There's Fantagraphics up top, roughly organized by author, though I guess we put all the David B books together even though they're from 3 different publishers. Whatever. Wait, now that I look at it, the Uncivilized David B book is not there... argh! I'm upset when the shelf is not properly organized... next is D&Q, plus some attractive criterions that are mostly taking up space now that we don't have a DVD player or a DVD drive in any of our computers.

Next I think was supposed to actually be our French shelf, but it's a bit of a hodgepodge now with Drawn and Quarterly spillover and also some First Second, and now that I consider it I think This One Summer should go on the shelf above with Skim and Indoor Voice, that seems more sensible... next, the "anthologies with spines" shelf... I suppose. Why would Big Questions be on that shelf though? I am being forced to confront realities that make me uncomfortable!!

This is Big Book Jail. Publishers who think they are too cool for bookshelves wind up on the floor. Araki, Killoffer, Chris Ware, Ivan Brunetti, and Kramers Ergot 7 are all here. There's more Ware elsewhere, I think Building Stories is on top of one of the cases. 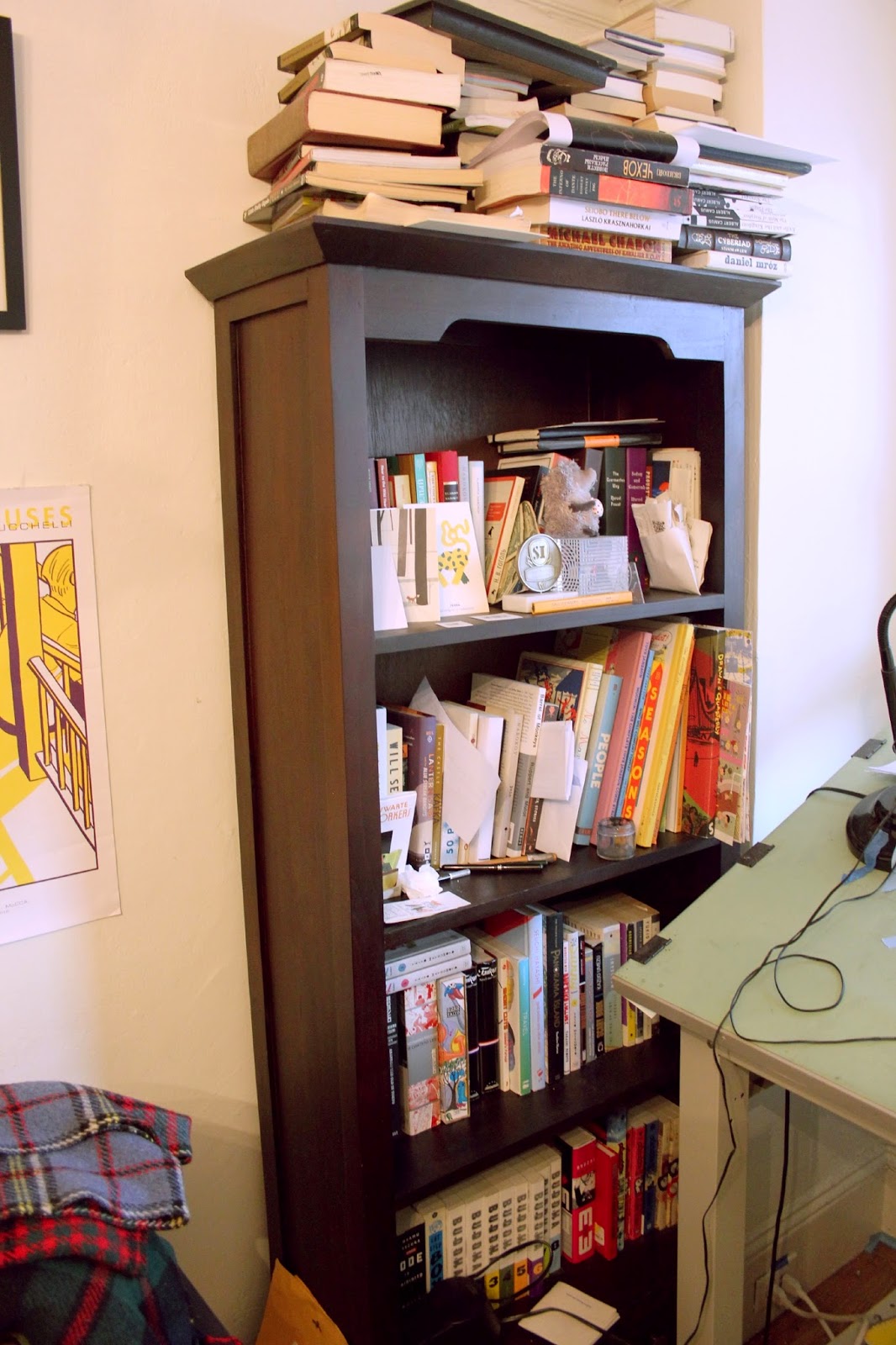 Shelf #3 is mostly Roman's shelf because it's tucked away by the drafting table. It contains literary fiction, old textbooks, misc. books Roman likes, and (my) manga on the very bottom. Roman already did a shelfie so you can see what he had to say about his books here. Ha ha, it looks much tidier in that post... 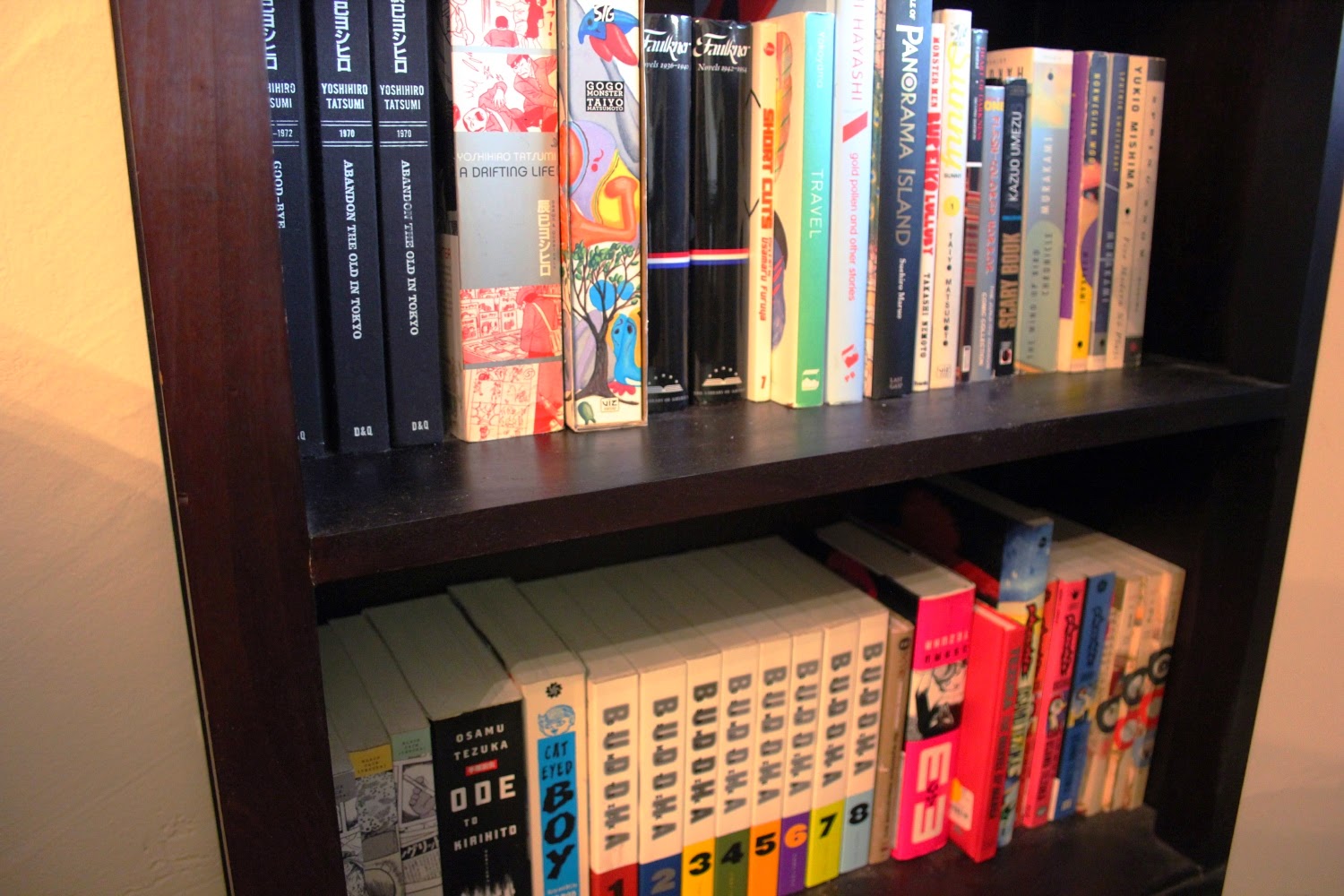 Here's my presentable manga. I like all the Tezuka books that Peter Mendelsund did covers for, put out by Vertical.

The manga you see here is very attractive and classic and hardcover and etc. In the closet, in some cardboard boxes (not pictured) I have scores and scores of tattered Viz paperbacks I haven't touched in years, along with all my Transmetropolitan and Sandman and Alan Moore stuff. 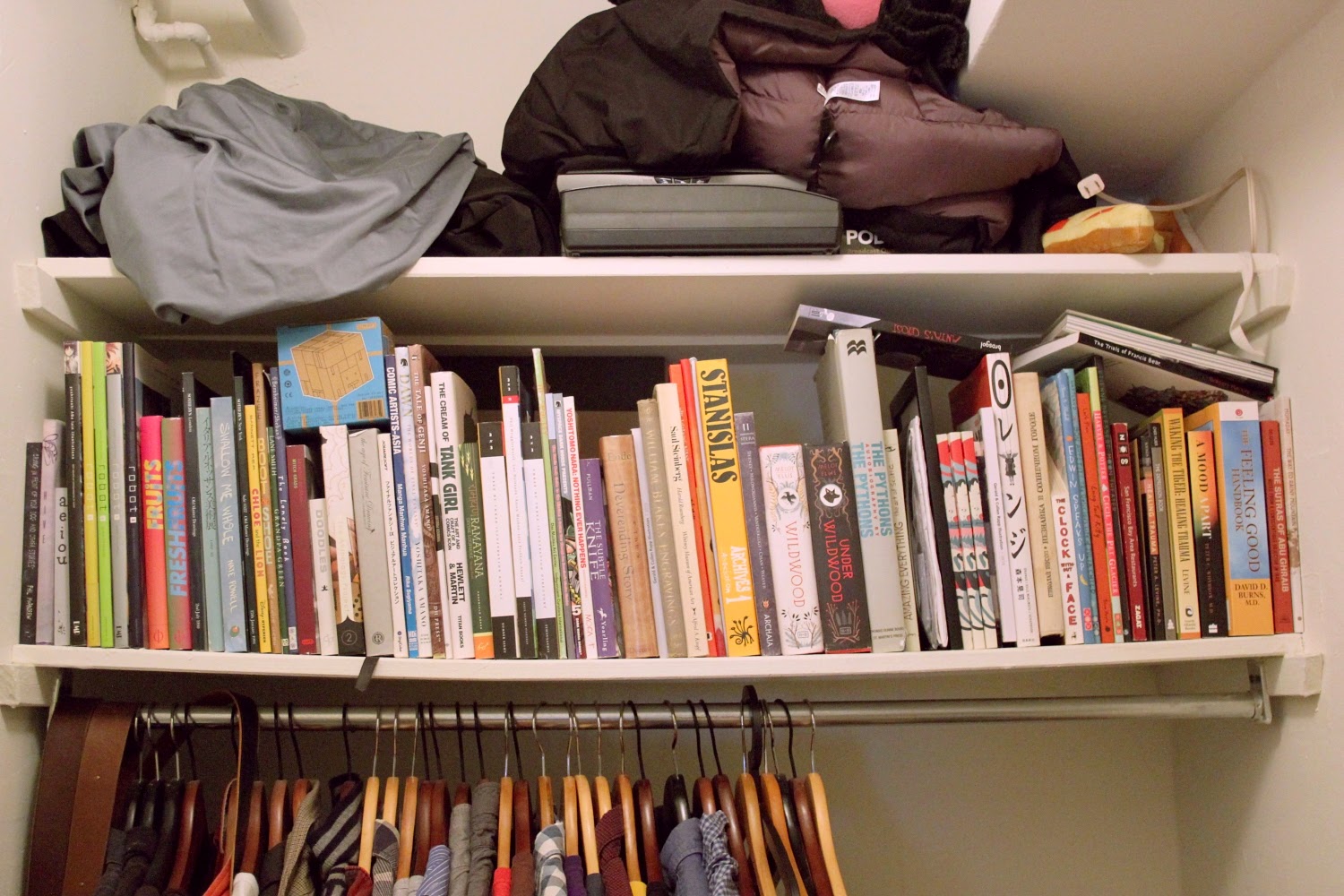 This is a miscellaneous shelf in our closet that may collapse one day and kill us. 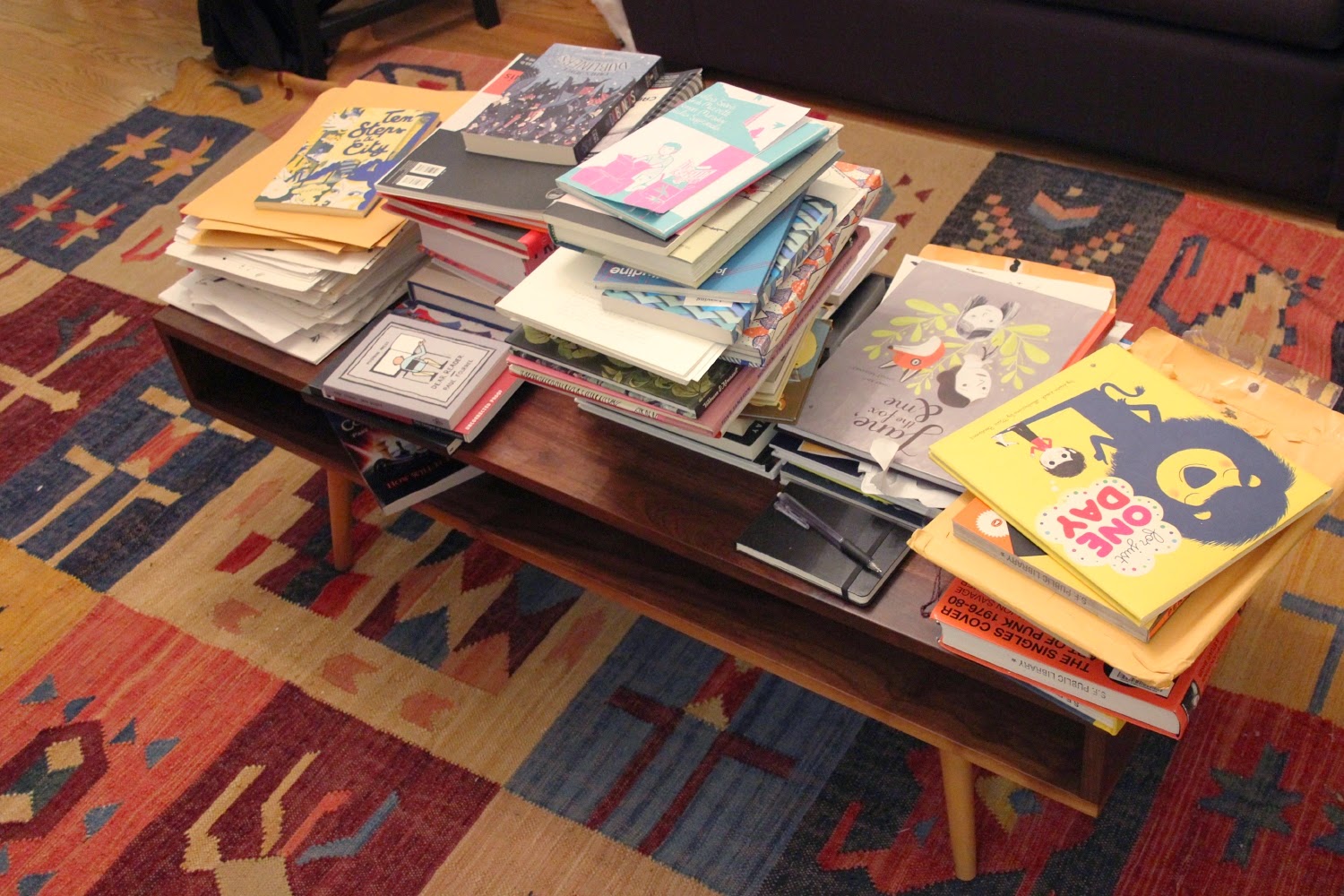 Here's our coffee table which is not functional as anything other than excess book storage. 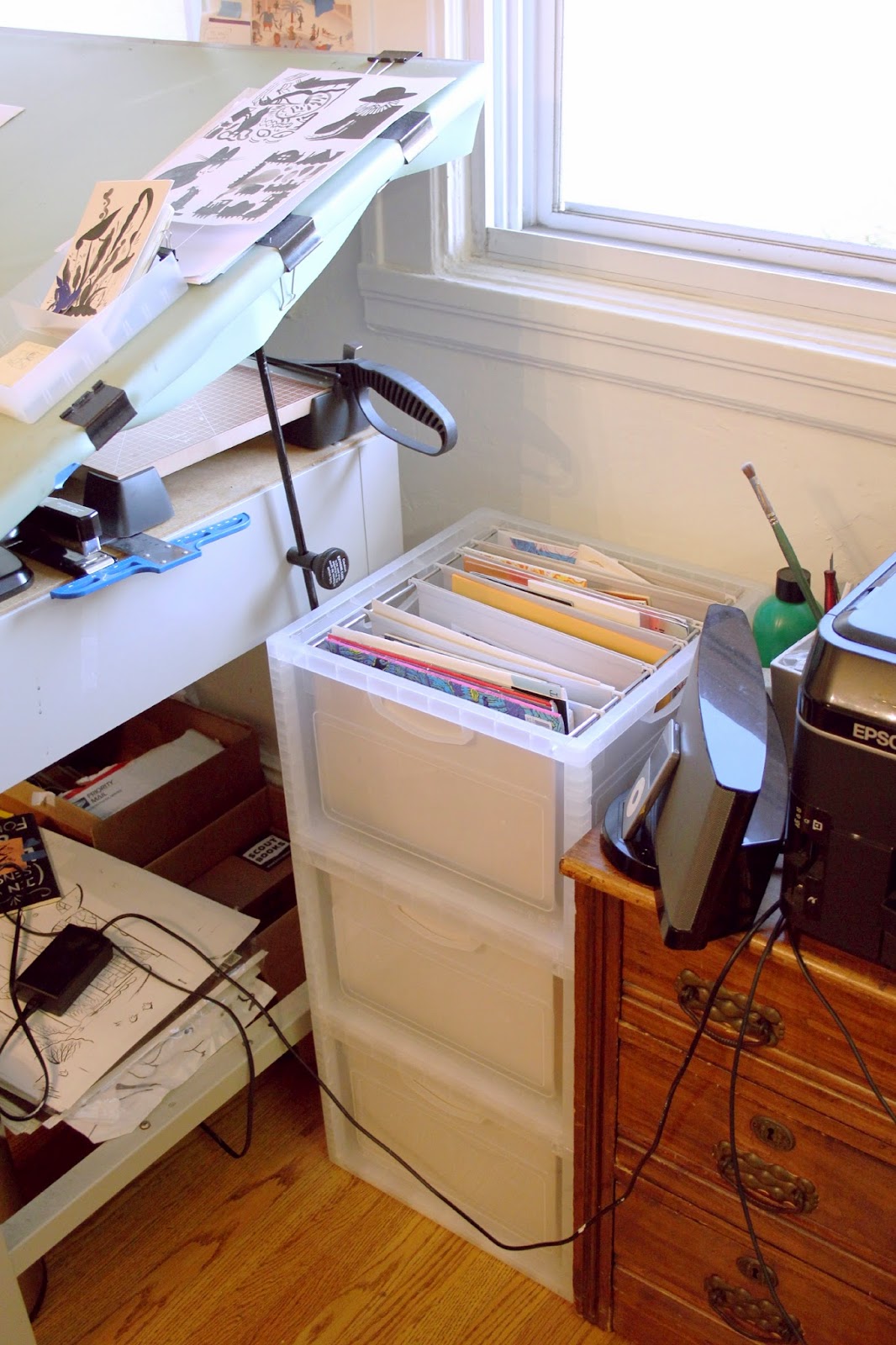 I keep my zines in these handy stackable file boxes. These ones are livinbox brand and I wanna say I got them at the Container Store? 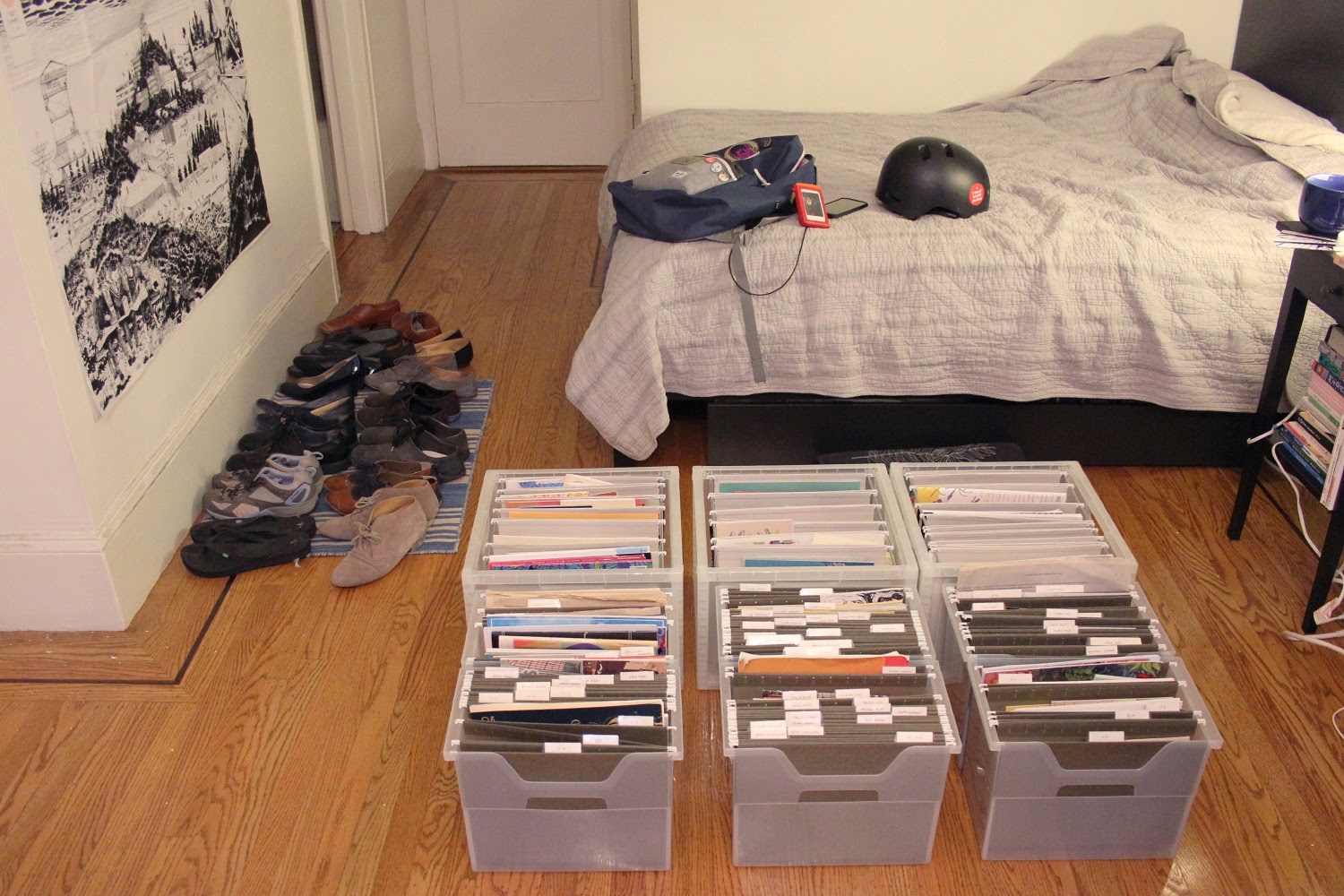 In the closet I have some less handy but still serviceable open-top file boxes. Here you see all my zine storage assembled in one place..... and also our shoes (and a big wonderful poster by Henry McCausland) 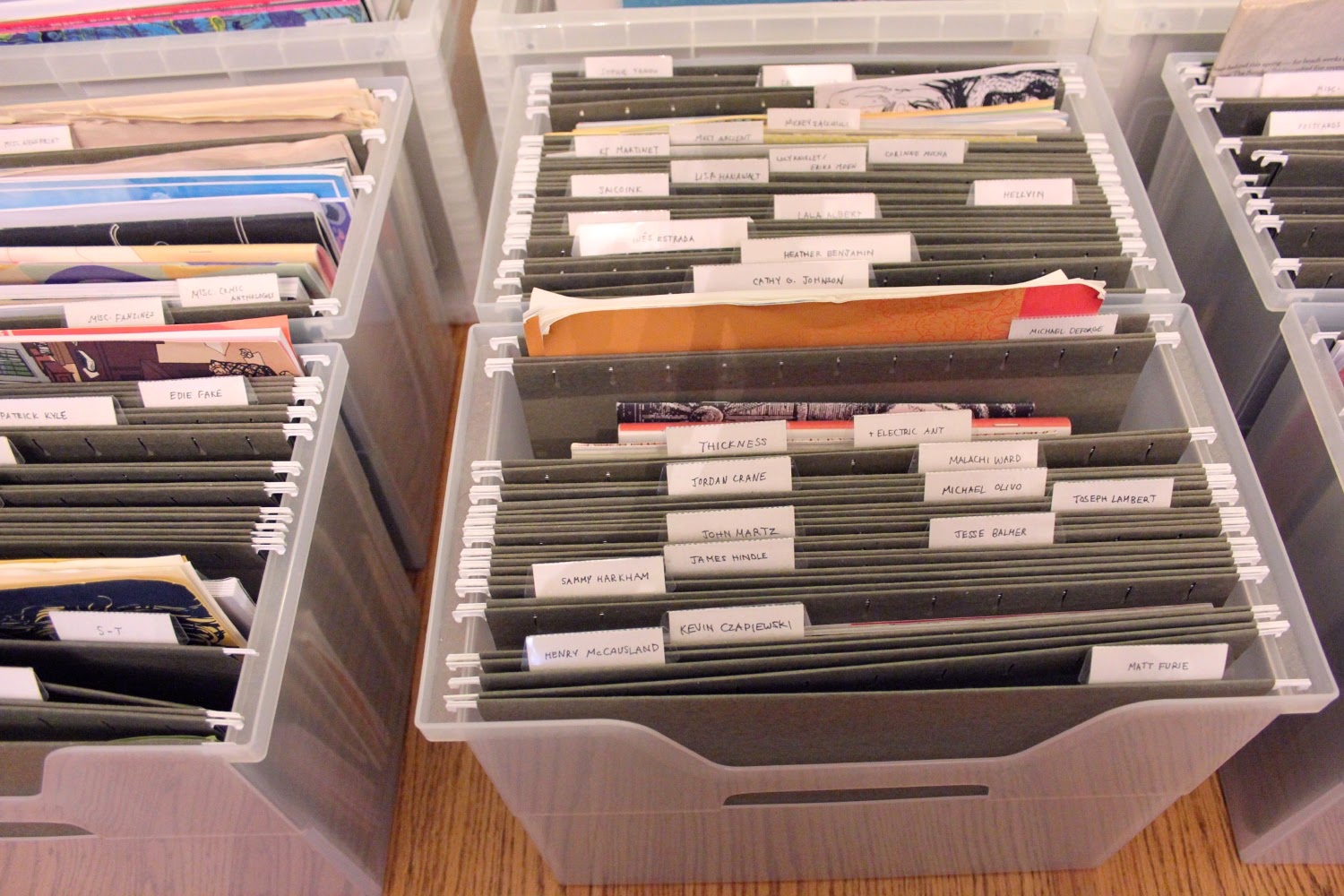 When I first started storing my zines this way, I had the noble goal to sort them all with these useful labels but that dream has long since died and 75% of them rest unsorted. Zines are so annoying, they're all different sizes and they get damaged so easily! Why would anyone make them!!! No but to be honest I cherish my zines far more than my hardcover books, truly.

Now, here are some books that are cool-looking and maybe a little rare that I can show off. 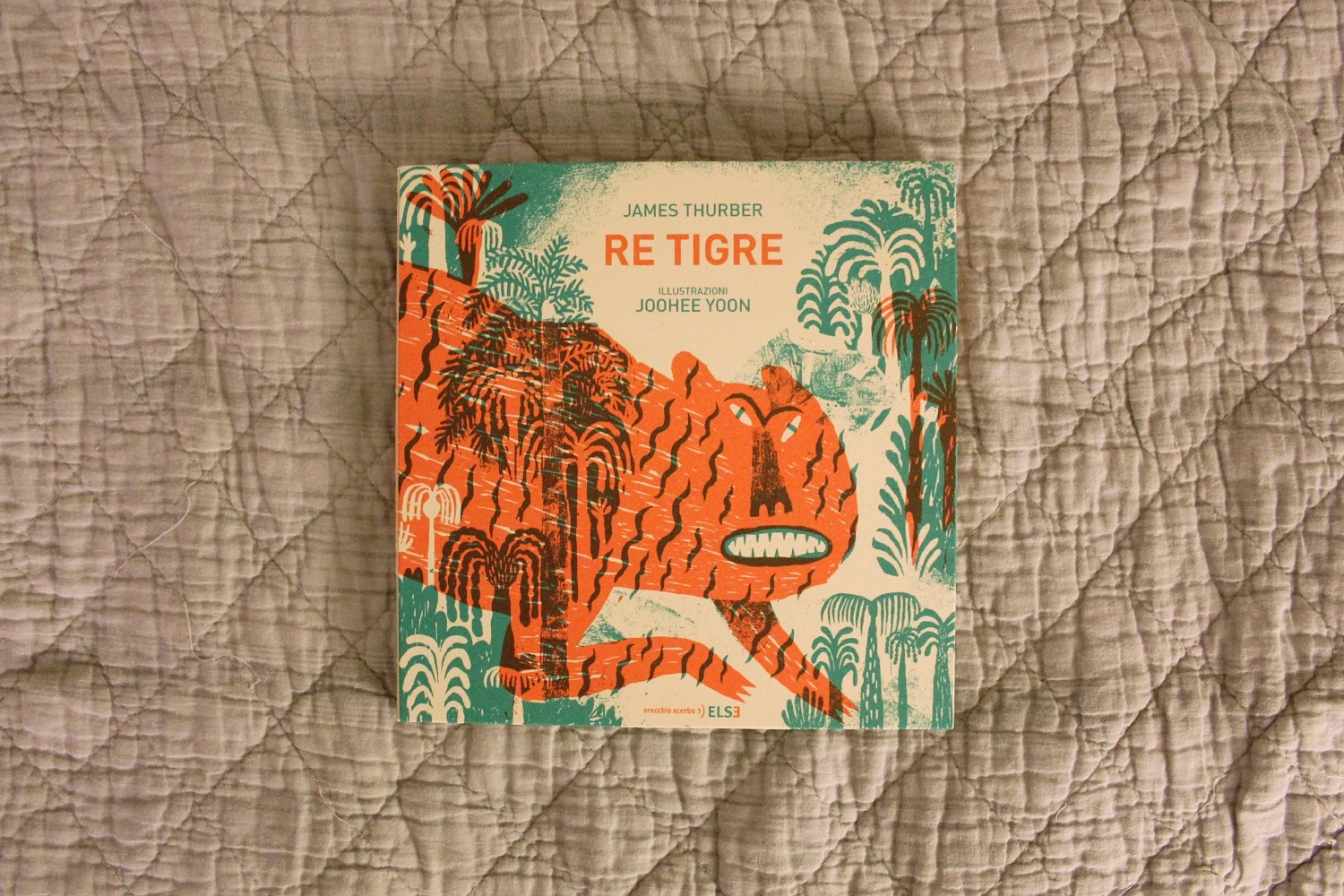 Re Tigre is a silkscreened Italian picture book illustrated by my friend JooHee Yoon. 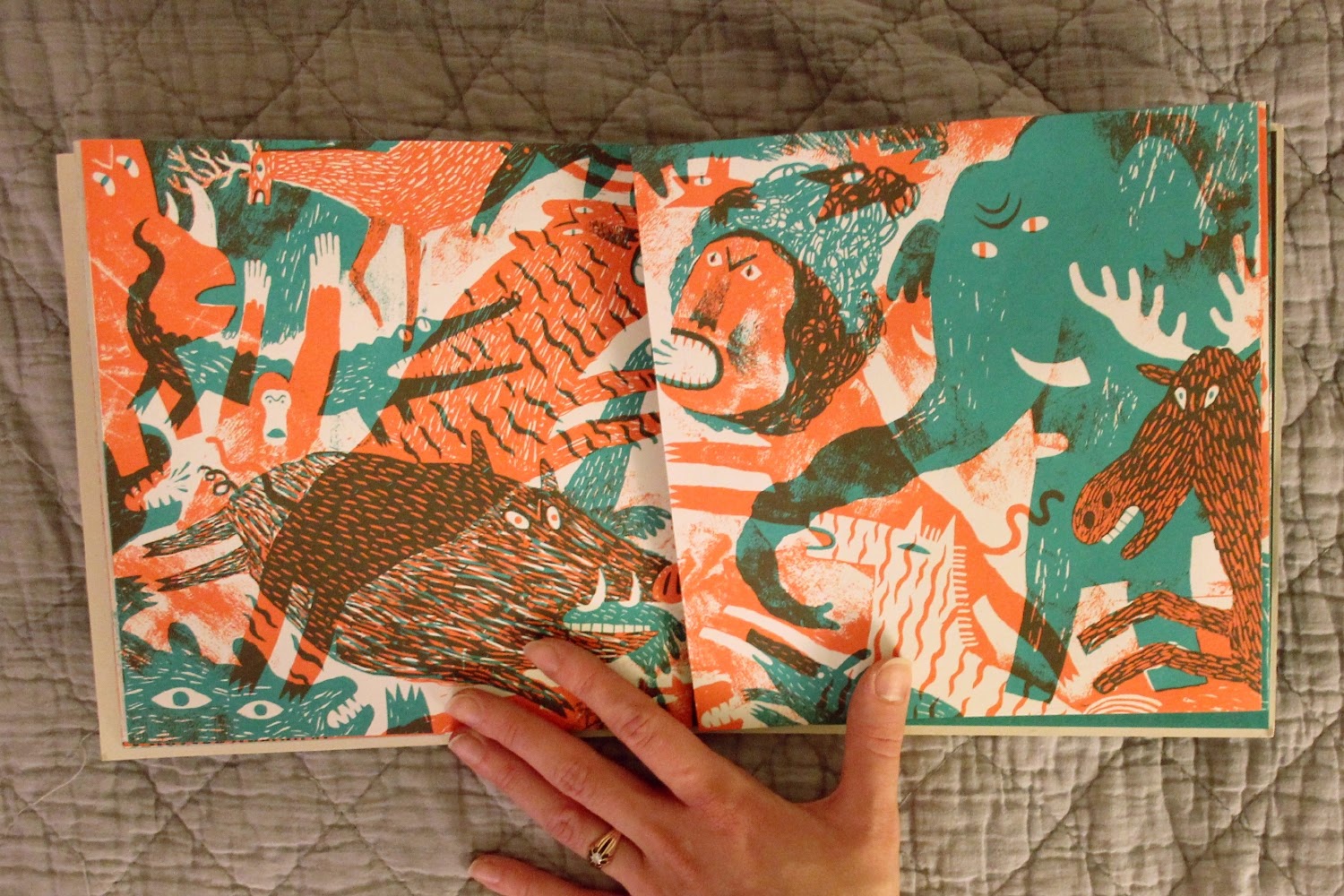 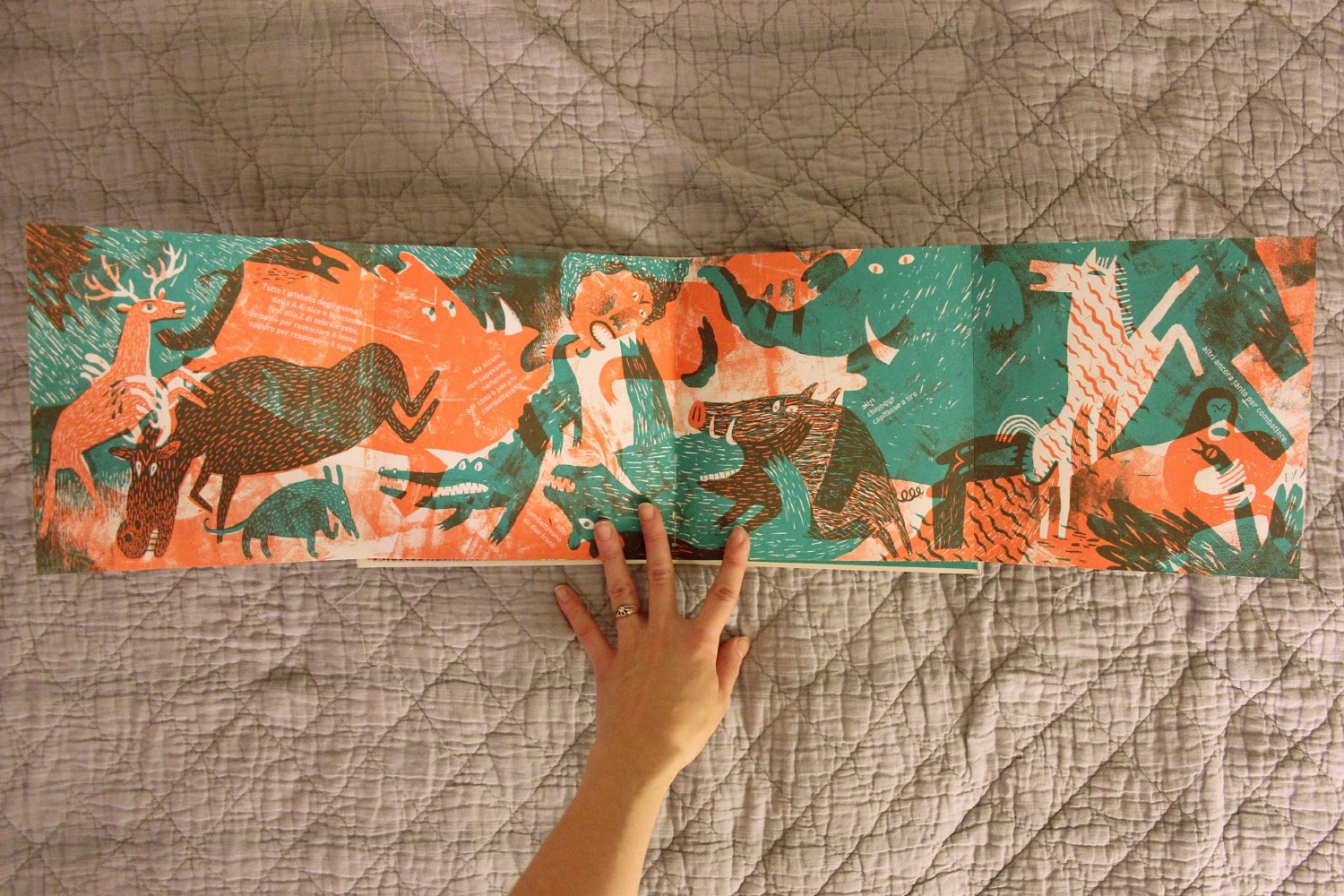 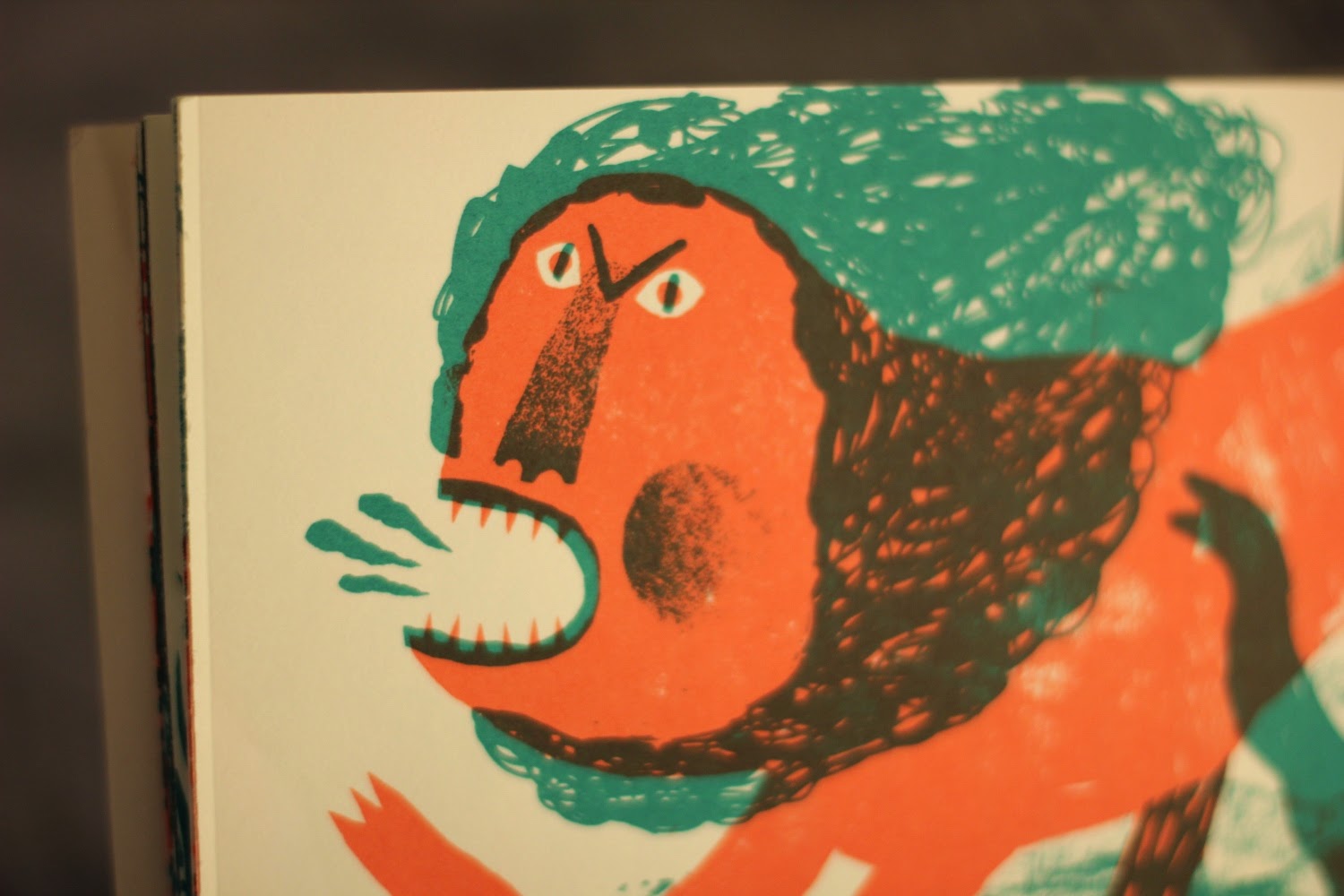 It's got foldouts and everything. I love silkscreened books. I love printmaking. I think JooHee is fantastic. 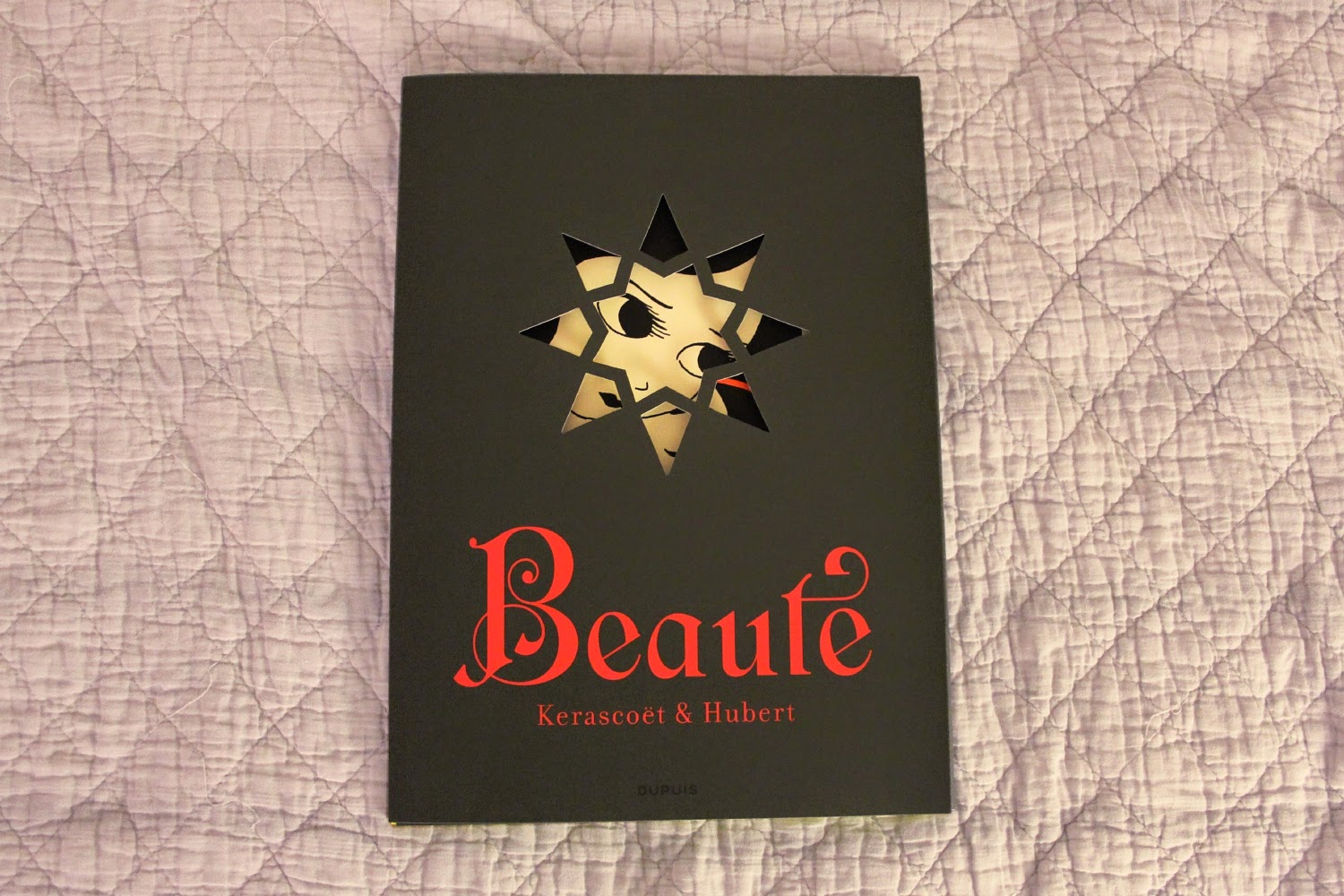 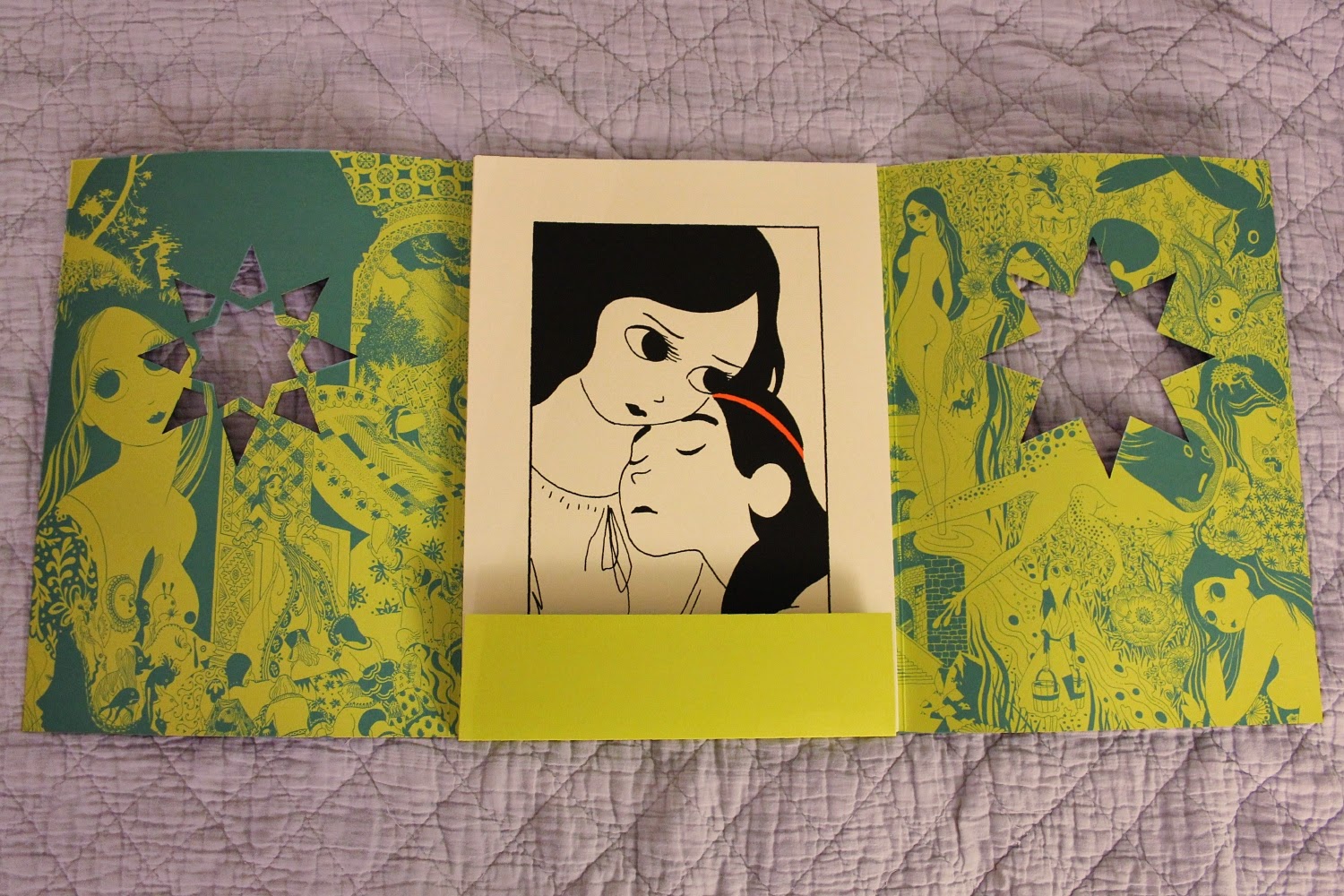 I'm sorry... this is not in truth a "book..." but as collateral material for a comic maybe it will be interesting. 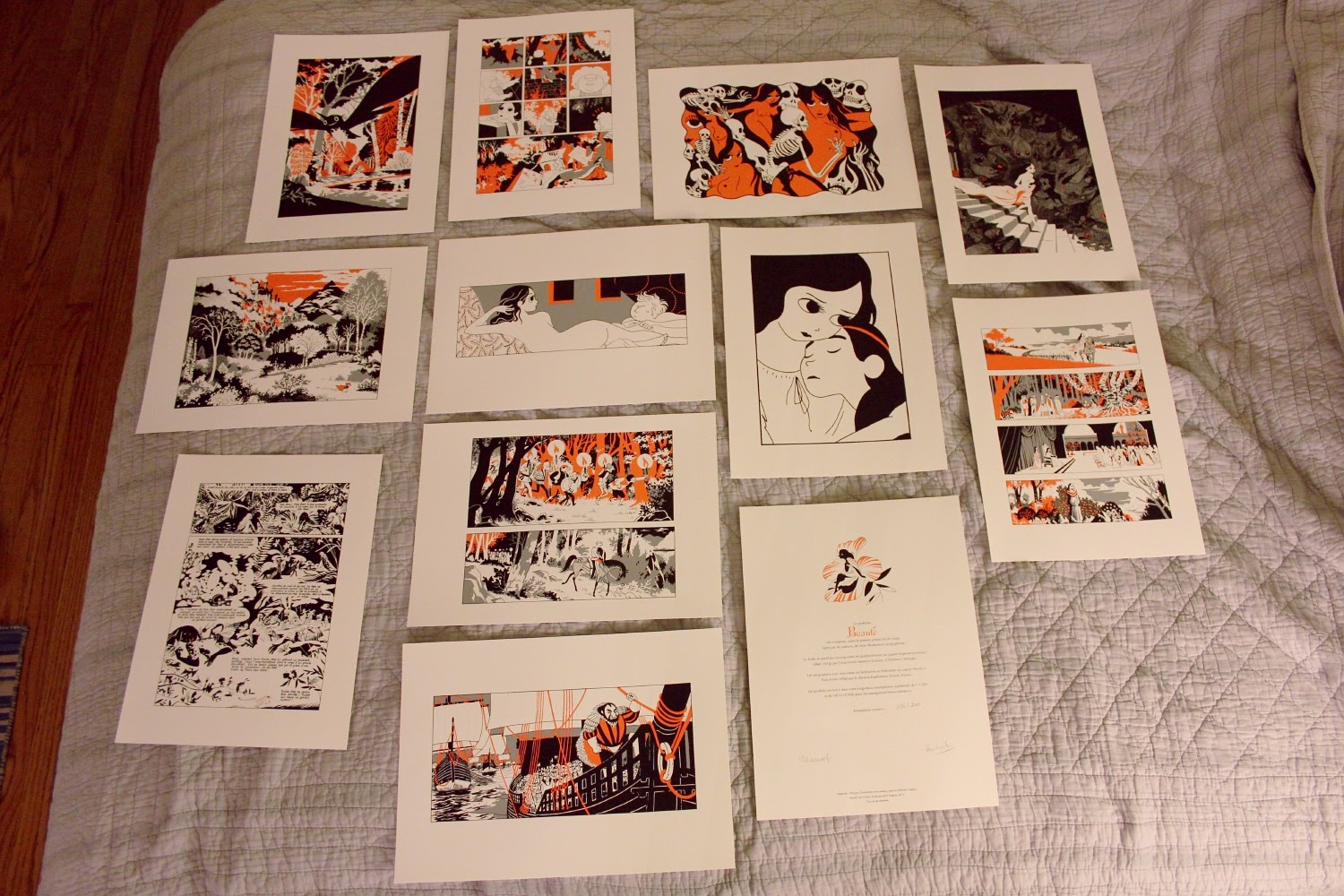 This is a collection of 12 two-color serigraphs (I think there is no difference between a serigraph and a screenprint?) from Beauté, the Kerascoët and Hubert series. 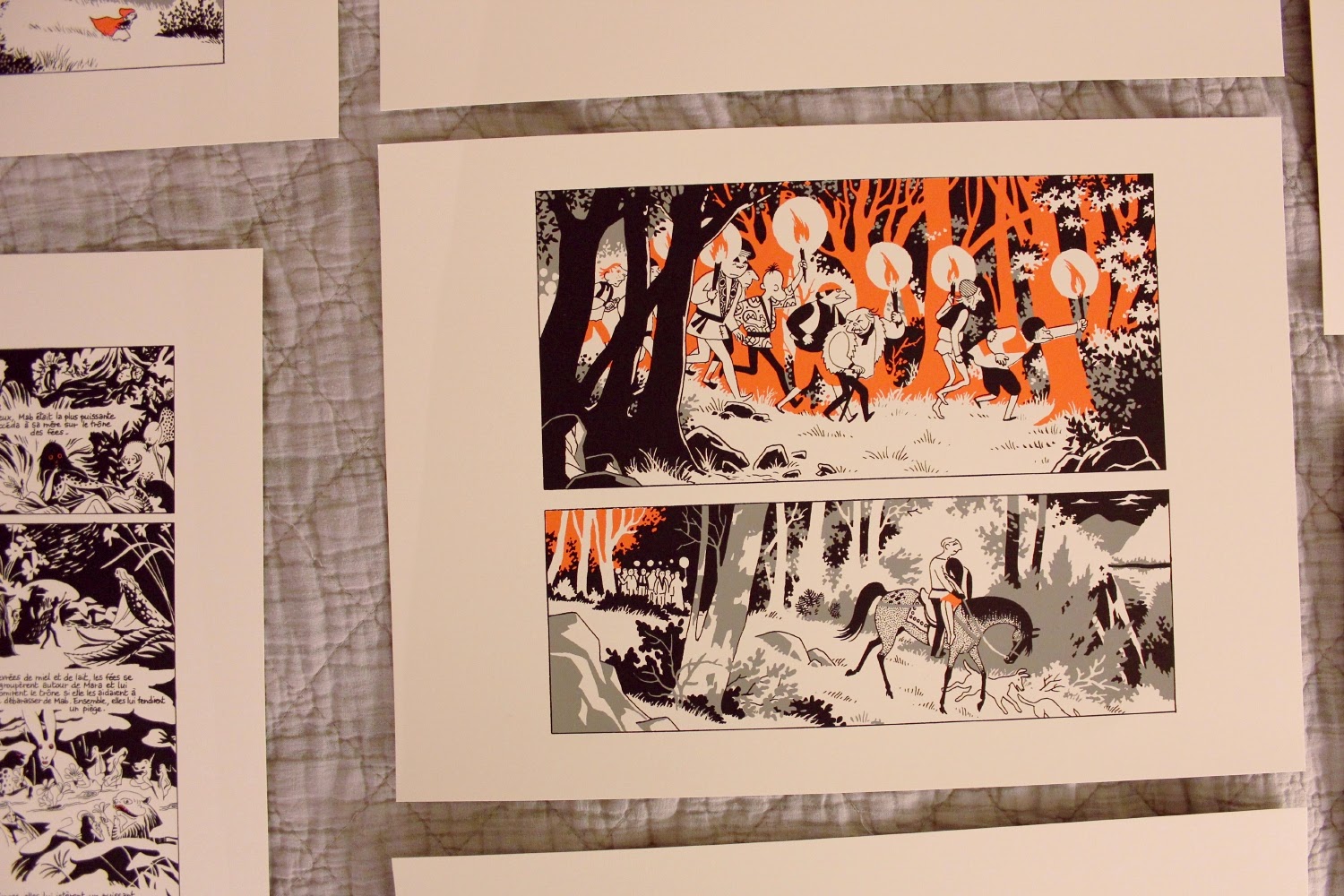 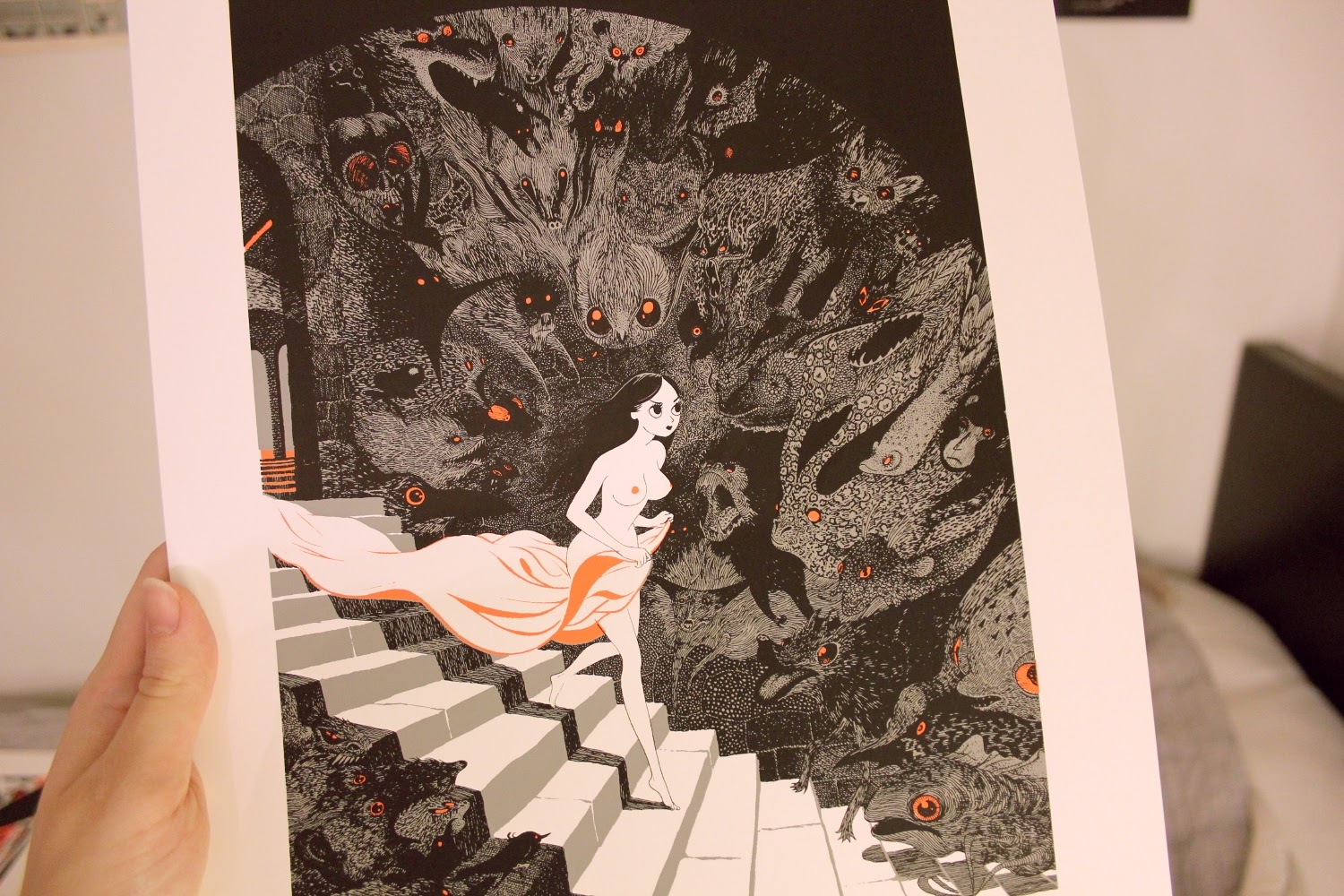 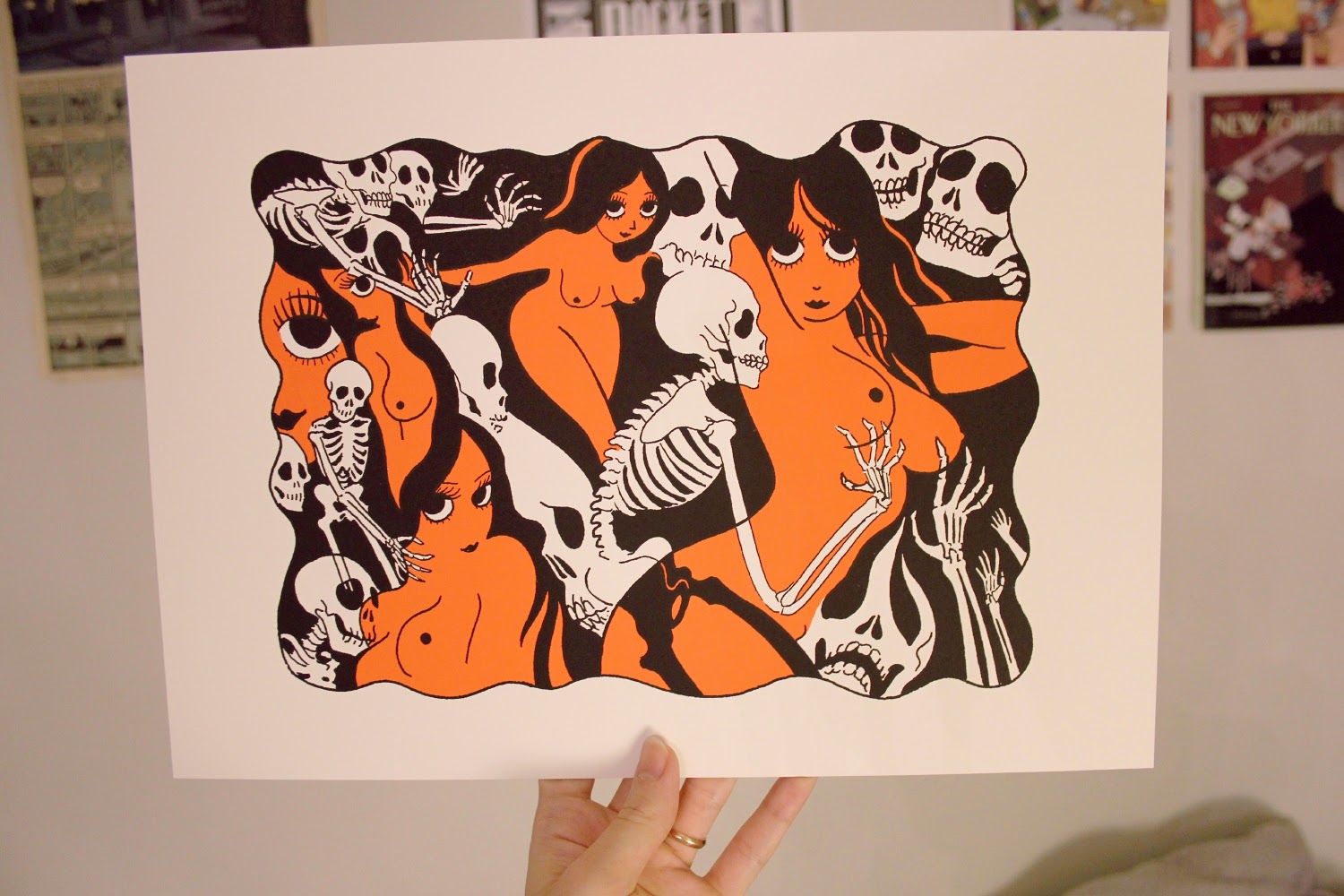 Kerascoët are truly incredible and without equal. Their work is so lush but so clear. And so funny but also so messed up? I love that kind of sensibility that is lighthearted and serious at the same time. 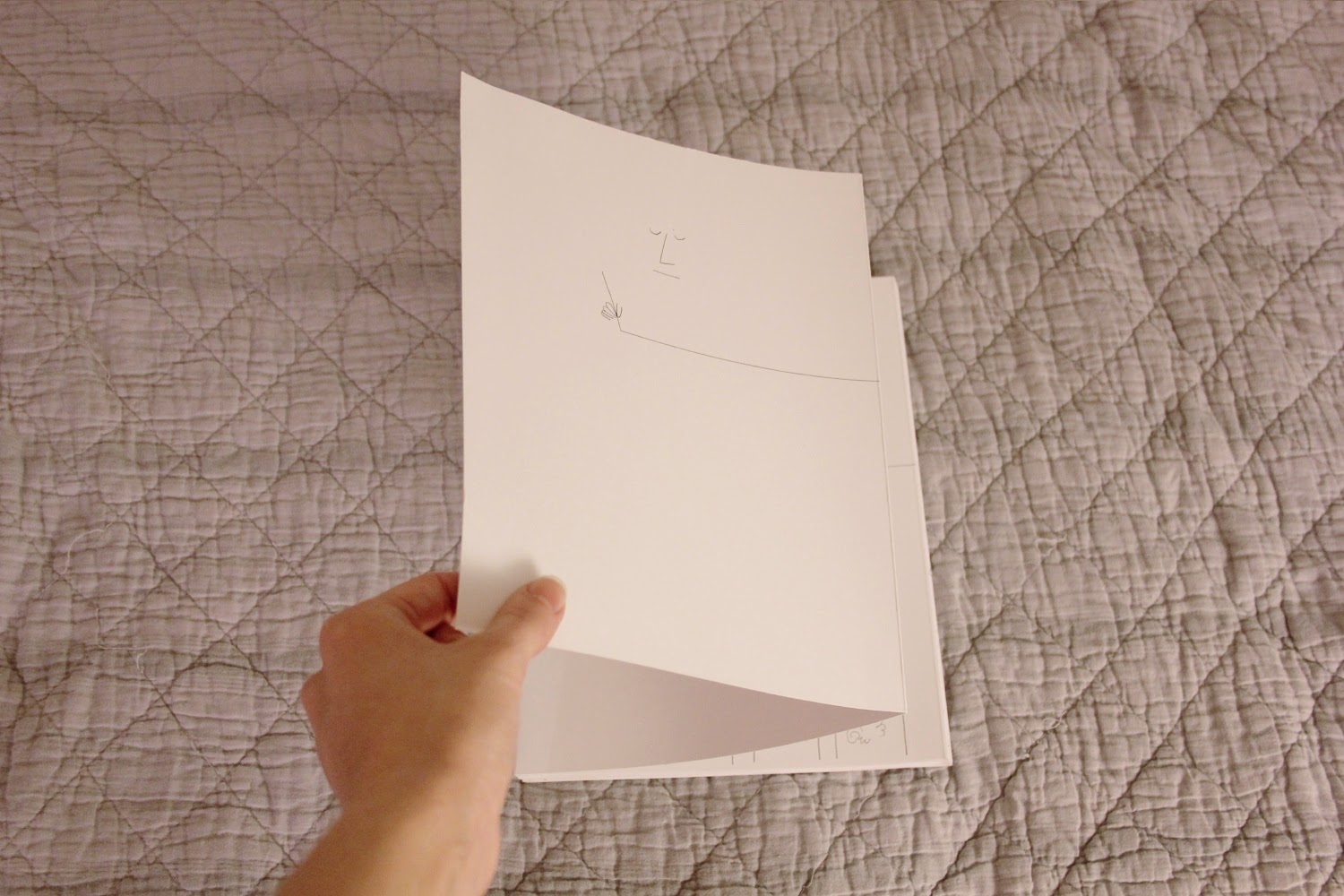 This book belongs to Roman but it was a gift from me so it's fair game. 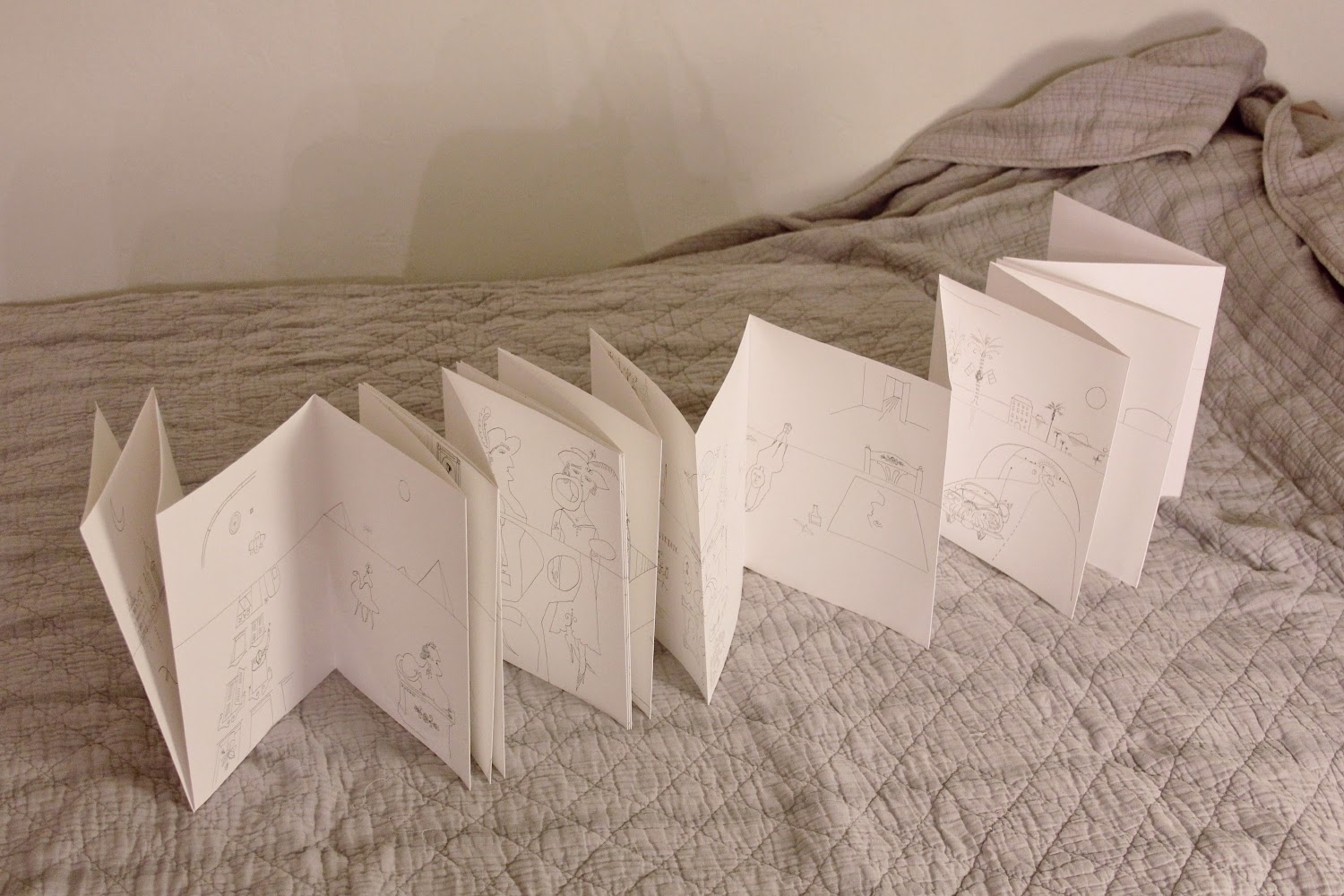 Nieves, a publisher from Switzerland who put out fantastic stuff (Yokoyama, James Jarvis, Andy Rementer) made this amazing accordion book from Saul Steinberg's 10-meter-drawing The Line. I think it was originally designed to be a large mural but I think you will agree it should qualify as a comic.'

A massive thank you to Sophia for her time and participation. You can view all the previous installments of Comics Shelfie here. Next installment will be up in a fortnight.
Posted by Zainab at 12:11