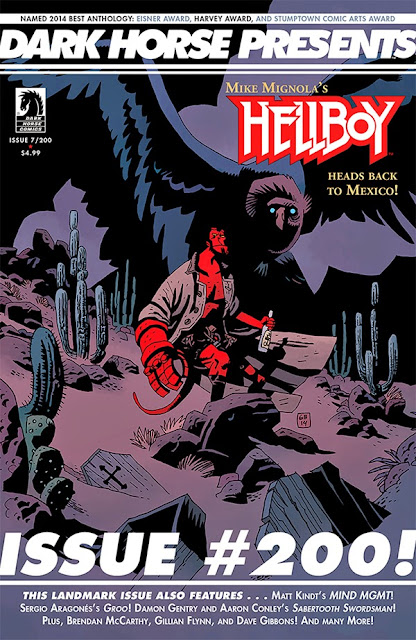 Got the press release for this, and while I tend to overlook most of these kind of things due to a wider contextual unfamiliarity with the material, this is worth noting for historical purposes and more importantly, because it's going to contain some comics by artists I'm into (and I really like that cover). February will mark the 200th issue of Dark Horse Presents, the publishers flagship anthology title, and the first book produced when the company began life in 1986. The anthology continued to run in print until 2000, then moving to a digital incarnation on MySpace as MDHP between 2007 and 2010, before returning to print in 2011. It has won various awards, triumphing at both the Harveys and Eisners, and seen artists such as Moebius, Geof Darrow, Arthur Adams, Eddie Campbell, Paul Pope, Frank Miller and more contribute to its pages.

On February 18th, the publisher will release a bumper, 80-page 200th issue, featuring a Hellboy cover by Gabriel Bá, and an Ape-X variant cover by The Goon creator Eric Powell. It will also include a new Hellboy story penned by Mike Mignola and illustrated by Bá- revisiting Hellboy’s time in Mexico and acting as follow-up to The Coffin Man, a mermaid story by Gustavo Duarte (whose cartooning I love- check out Monsters if you haven't already), and Masks, the Dave Gibbons and Gillian Flynn comic originally created for the Guardian, as well as: