In praise of: Daryl Seitchik's Missy 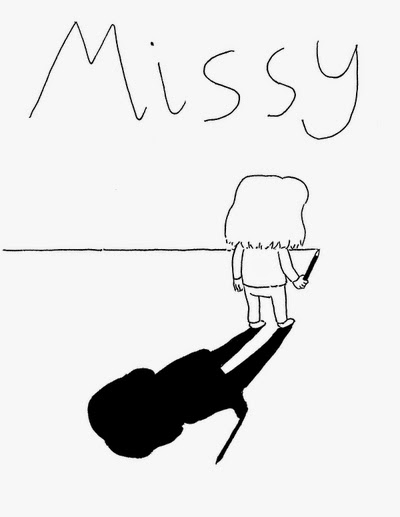 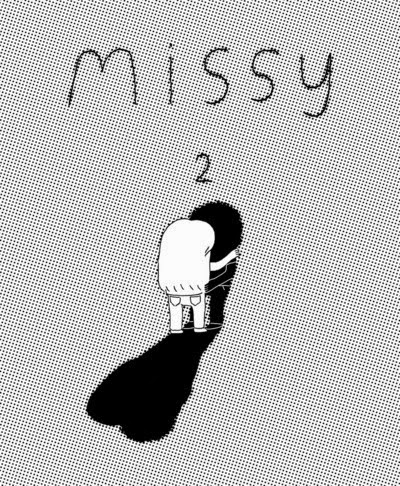 This second half of the year, I've not really been into comics. I read them because it's what I do -and not in terms of profession- but because I read them and there's so many always around, but have been impressed by very little.  I've been regaining some of the passion slowly, and as per previous patterns, it's been in the small press and self-published work that I've found the freshness and exciting engagement of ideas and the medium itself that's helped me to steer through the stagnancy. The rehabilitation was sparked by Daryl Seitchik's Missy comics- a diary comic of a Daryl persona (I'm not sure to what extent this may be auto-biography) starting as a young girl and jumping forward in years as she grows. I like the 'straight' superficial reading of the Missy comics -especially Missy 1 when Daryl is still a kid- as this sharp young girl observing people, the way they behave, relationships, and working through her thoughts and feelings, as much as I like digging into it a bit deeper.

However, there's much more going on that that, in relation to both Daryl's (talking persona Daryl here and throughout) thoughts and what's being presented, and the comicking on the page, as is evident even from the covers above: in both, the reader is  shown the back of Missy- rendering her faceless- a refusal to identify herself ('Missy' is the name of the diary) or be portrayed in a conventional, expected manner. It plays up the diary facet of 'looking in' or voyeurism- we're reading her diary, her life, and she's not aware, which is why she's not facing us. In the first cover, she's surrounded by a space of white nothingness, and in the second a sludge of grey. A focal point in both is Daryl' shadow- her own (although almost separate from her- the lack of mirrored line makes it seem as if it has independent autonomy), and then the shadow being created by the embrace of her and the person she's kissing (which at first glance looks like she's about to enter or disappear into a large hole, losing herself somewhat).

The comics alternate between being the diary of a young girl and a growing woman. Missy 1 is dated 1998 and doesn't move beyond that year, where Missy 2 collates entries from 1999, 2001, and then 2006 through to 2010. In Missy 1, Daryl talks of her parents' divorce and using all her wishes- dandelion finds, birthday- on wishing they would stay together, wondering if angels and fairies exist, contemplating the mean nature of her friends and younger sister, and trying to figure out how she feels about various boys she might like. She's rather isolated internally, but where Missy differs from other comics featuring people finding themselves and sorting through life's banal nuances, is -in the first instance- her age. her explorations feels very true to a 9? 10? year old but she has and makes friends, forges relationships, she's more engaged than she may like to admit, or perhaps would like to be, she simultaneously wants to be removed and involved; like all of us, she simply wants things to be a particular way- her way. She wants for things to improve and be better. She's introspective but also aware, trying to reconcile and adjust emotions with actions. 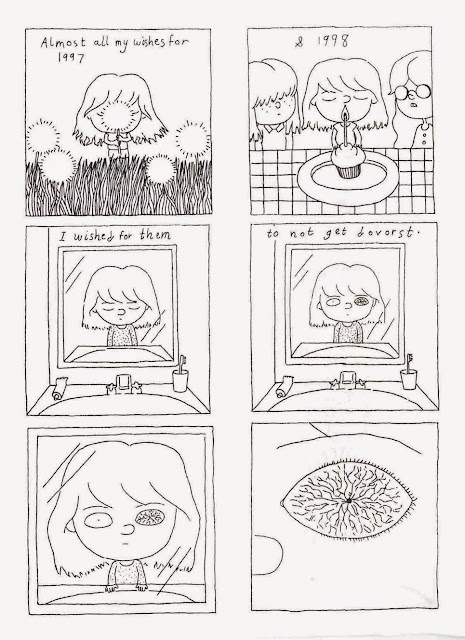 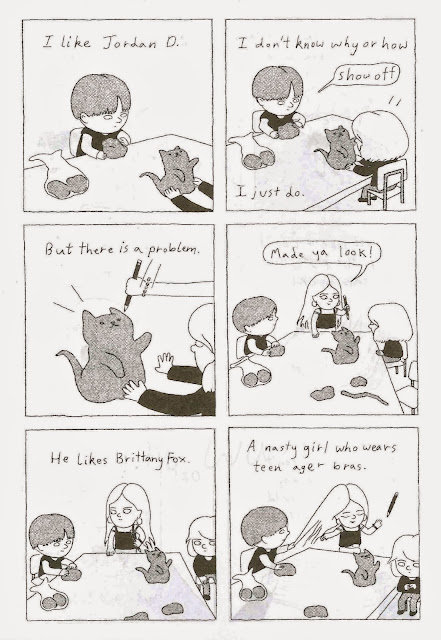 Where you can possibly only go so far with a little girl's thoughts, Seitchik offers complexity via the images- a repeating motif of obscured or faceless faces -alluding to watching and seeing, wanting to be seen, not being seen, of an identity sometimes unknown or being formed, hiding. In Missy 1 there's a recurring image of things extending, growing beyond Daryl's reach (her parents divorce for example), depicted via an illustration of first the bronchi in her lamp which contains a strange, nerve-type shape and then in the veins of her eyes. Seitchick starts with a full-view and then closes in tight on both the lamp and the eye, so you get a panel-full of lines branching out, with the pupil a pinprick nucleus in the middle (representative of Daryl).

Seitchik uses a 6 panel page, and there's a rhythmic intonation to the lines and pacing, mirroring a child's cadence (she starts out with spelling mistakes which clear up as she gets older) and the short, carefully structured sentences constructed sparsely but to provide emotive impact. One of the things I found very interesting and liked was the manner in which Seitchik places these sentences around a panel for a desired effect. For example, 'I think that they should tell' in the top left hand corner- the first thing you read, then directing the gaze towards the main illustration, and finally at the bottom, more centered, you have 'the real trooth.' It's both one, a continuation, but also work separately, mimicking thought process and adding dramatic resonance. Instead of  the full 'i think they should tell the real trooth' the pause in between, and the separation of the phrases reinforces her feeling. This is done often: 'I made a bed' at top center of panel, then a centralised picture of Daryl lying on the floor, and 'out of sticks' at the bottom center. That one I appreciated even more due to the black background of the 'i made a bed' suggestive of darker undertones, and then the lighter framing of 'out of sticks.' This carries through to the diary as she gets older, but with sentences now parsed between two panels. So in panel 1: ' she looked' panel 2: 'empty.' And again, panel 1: 'she looked' panel 2 'absent.' 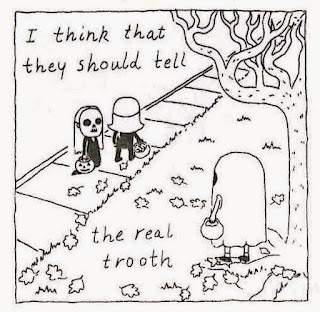 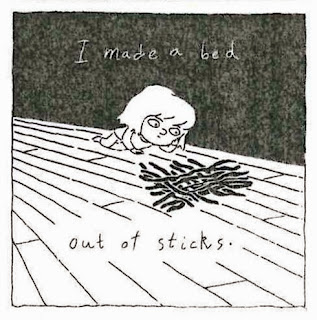 In Missy 2, Daryl's growing, there's more riffs on the themes of 'removed' connections- online conversations with faceless guys, getting involved with a guy who's a life model and she has to paint in the nude but doesn't know, and still adjusting expectations. She doesn't feel anything when kissing people (that page below where she's kissing and Seitchik drops three panels, letting the white space be an empty vista of nothing-ness, so the ones with Daryl in feel real and alive), but holding hands and smiling makes her feel warm. She feels as if there should be more to connecting with people, or more in connections, bridging the gap between what's inside and what's playing out in front of her. But shes assured; she's not unhappy. I like that.

I like that Daryl's constantly working to figure things out but not in a frenetic 'what does life MEAN?!' way, but simply living and learning. She wonders if she should be putting in more, giving more of herself, but then sometimes find that absurd; the strip where she's breaking up with her boyfriend and lying on the bed with her face buried in her pillow ('I didn't want him to see my face'), 'Look at me,' he says. 'If you don't love me, say it to my face.' And she turns to face him and tries to say it but gets the giggles- just brilliant. The other day I was discussing how when artists want to talk about a certain issue or point, it should be in the service of the narrative and not the other way around, and what impresses me about Seitchik is how much she weaves in naturally, as part of her story: undercurrents to be picked at.


I think what I appreciate most about these comics is the tone Seitchik manages to strike: so many people go for realism and end up in grim depression. Missy isn't as insular as diary comics very often can be- even the ones that use lashes of fiction and personas- its dramatic but not histrionic, it takes itself seriously without being self-absorbed- it's level and involving and just immensely good. Seitchik does more with the medium and manipulating and arranging panels and art and words than I can describe, and every stage of her life feels true to the age represented. I'm sure we're all weary of the worthy, narcissistic, white artistic struggles memoir or auto-bio comic by now (look, I'm eminently and endlessly interesting to myself, but I'm under no illusions about how many people that extends to, i.e. no-one); this reads like an incredibly invigorating take on the quasi fictional auto-bio genre and one that I could go on reading for a while. And in closing I would also like to add that I loved the torn page at the end of Missy 2- the final strip sees Daryl writing a page in her diary, tearing it out and making it into a paper aeroplane, so the very last page before the back cover and after that strip is the stub of a torn out sheaf. Great way to finish.

Most of Seitchik's Missy comics are available to read on her Tumblr (this review is of the print editions of |Missy 1 and 2). You can buy Missy 1 here (for $1!) and Missy 2 here. 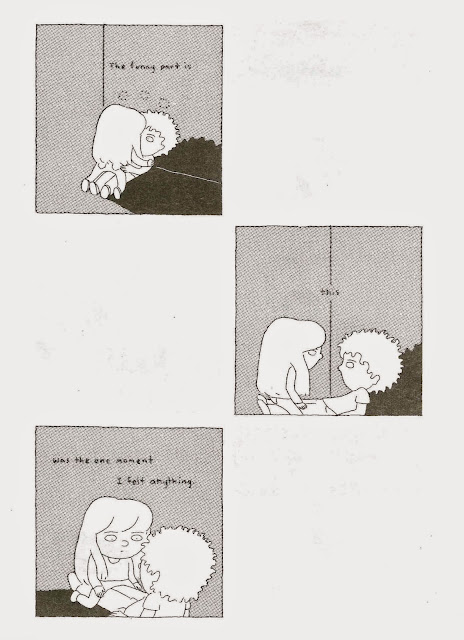 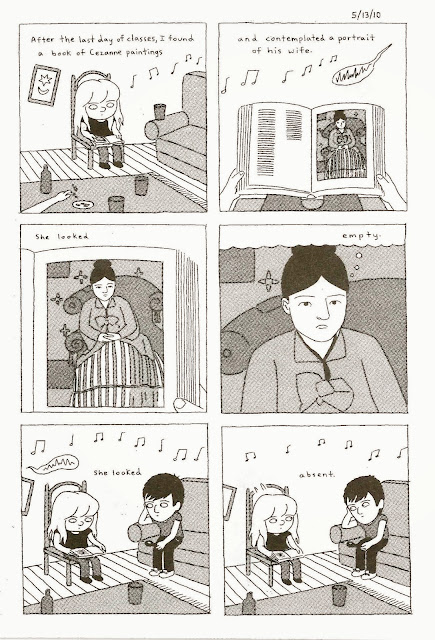