Interview: Erik Svetoft 'We walk around with all these shapes and layers inside that keep us alive' 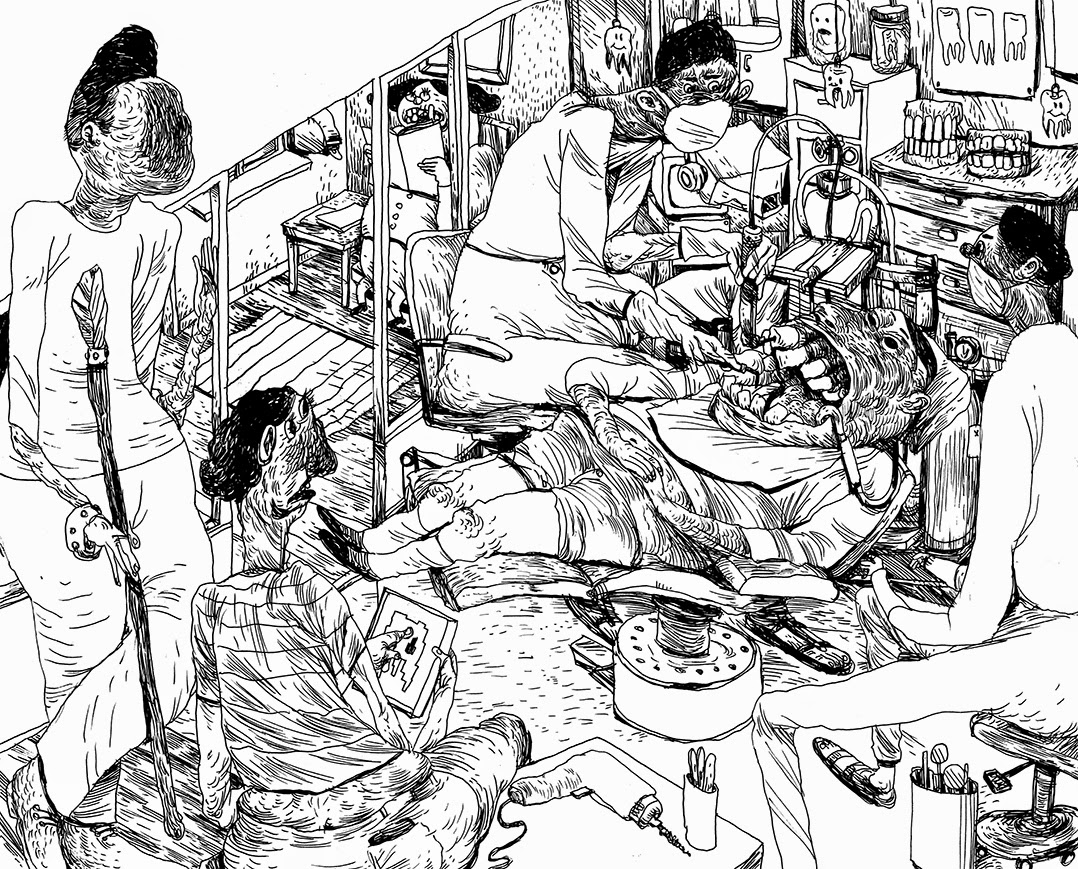 If you read this blog regularly, you'll know the most exciting take-away from ELCAF festival earlier this year for me was the discovery of a fantastic new (to me) artist in the form of Erik Svetoft. While Svetoft wasn't at the festival himself, Swedish publishers Santorium, who had put together and published Limbo- a gorgeously stitch-bound book of his artwork, were (it's currently the only work of Svetoft's available in print). They'd sold out of books by the end of the day, despite Svetoft being a relative unknown quantity, and it's easy to see why: his illustrations depict a singular vision, his handle on technique is impressive, his textures building layers of character and personality; unencumbered, without losing dynamism. There's an incredible sense of narrative in some of his illustrations: particularly the interlocking crowd scenes, but more than anything there's a very palpable live-ness, a warm viscerality: you're not just looking at a well-drawn picture, you're looking at a happening, something taking place- that feeling, the strand of emotion is present even in more stationary, traditional renderings, I've been wanting and meaning to ask Erik to chat for a while, something which we finally got around to this week.

Can you introduce us a little to yourself: where you live, what you do, etc.?

I am 26 years old and I live in the suburbs of Gothenburg, Sweden. I grew up in the cold north of Sweden in a big house out in the woods. I mostly just study in school and sleep or work at home right now, it's pretty busy. I found my old Game Boy recently so there’s also been a lot of Tetris going on here.

Am I right in think you're currently studying design, and also working as an illustrator? Where did this interest stem from? How did it develop?

Yes, I’m on my third year of a Design bachelor degree, graduating this spring and freelancing as an illustrator/graphic designer at the same time. I’ve only just started working professionally as an illustrator, mostly smaller projects right now, I’ve started looking for internships or studio jobs for next year, nothing is decided.

The education is pretty varied and so I get to try out a lot of different elements of design which is nice. The design interest has been building up for a long time along with all the drawing I guess, Just a general interest in visual arts and solutions. I did a couple of years of preparatory art school, did a lot of painting but mostly drawing, that was always the focus.

I was drawing constantly when I was very young but maybe somewhere around middle school I started to actively push myself to get better at it. I would draw people at bus stops or on the way to school, trying to capture poses and gestures as quickly as possible or fill out sketchbooks with just studies of hands or feet or shoes or whatever, just trying to improve my skills and figuring out things, mostly for my own enjoyment, I felt really comfortable using my imagination. If there was nothing else to do there was always pen and paper and that was always very immersing so I just kept going with that and then started to pursue a career in visual arts. 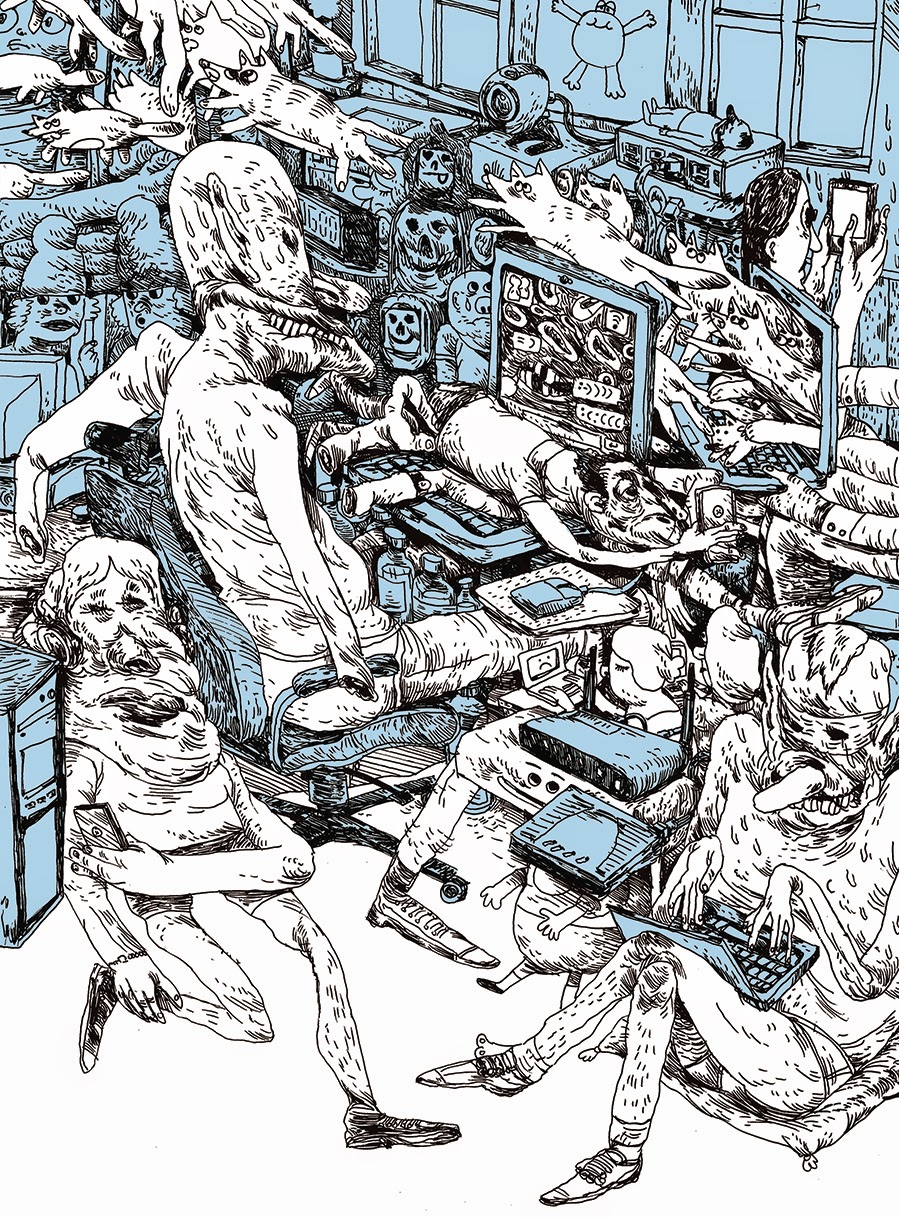 Do you draw digitally or analogue?

Almost all the drawing start out as analogue, I usually work in sketchbooks and on any paper I can find, then I scan everything and use the digital tools for coloring and composition.

I always draw straight with ink for the most part unless it’s very specific poses or settings or compositions I want to make, in that case I do some outlines in pencil first but they are mostly guiding lines, very rough. I like that it’s more challenging to make things work on the paper right away, there’s no second guessing and it feels more risky and I get more focused that way. I still really like pencil though, it has a great texture and I like the depth it gives. I should use that more and I probably will now that I’ve just been inking for so long.

Can you tell us about anything you're currently working on?

Right now I’m working on a textile pattern for a school project and also planning my exam project for next year, it will probably be a publication project, like an art book of sorts, very graphic design-y. I’m making some posters, there’s some ideas for larger scale drawings and paintings when I have the time and I’ve started on a small comic project, it might turn into a fan zine publication type thing this year or maybe end up in some other publication project next year, we’ll see. It’s mostly practice, doing sequential art.

Also I am adding the final touches to an animated music video I’ve made for a Swedish band called Lejonsläktet that will be finished soon, still waiting for a release date on that, that’s been really fun to work on.

You're fantastic at drawing faces and really showing the character of people from the details and features. Is there something specific you're thinking/ or wanting to get at when you're drawing faces, is there a process involved where your'e attributing certain characteristics to each- what is it you like about faces?

There’s just so much room to add personality and variation there and it can be really complex or simple, mostly it’s just experimenting with features and expressions to see what happens, like stretching out or pushing around and distorting. I don’t plan anything out, I just try to think of an emotion or reaction and then I guess I try to play around with different levels of abstractions and expressions. The most important thing is that it feels like there’s energy in there in some way, that it feels vivid.

I don’t know, I’ve always drawn a lot of portraits of friends and strangers, at first to try to depict them as accurately as possible and then sort of leaving that after a while and just doing lots of variations and playing around with it, it also goes into the idea of non-verbal communication, to express things without words but with faces instead. 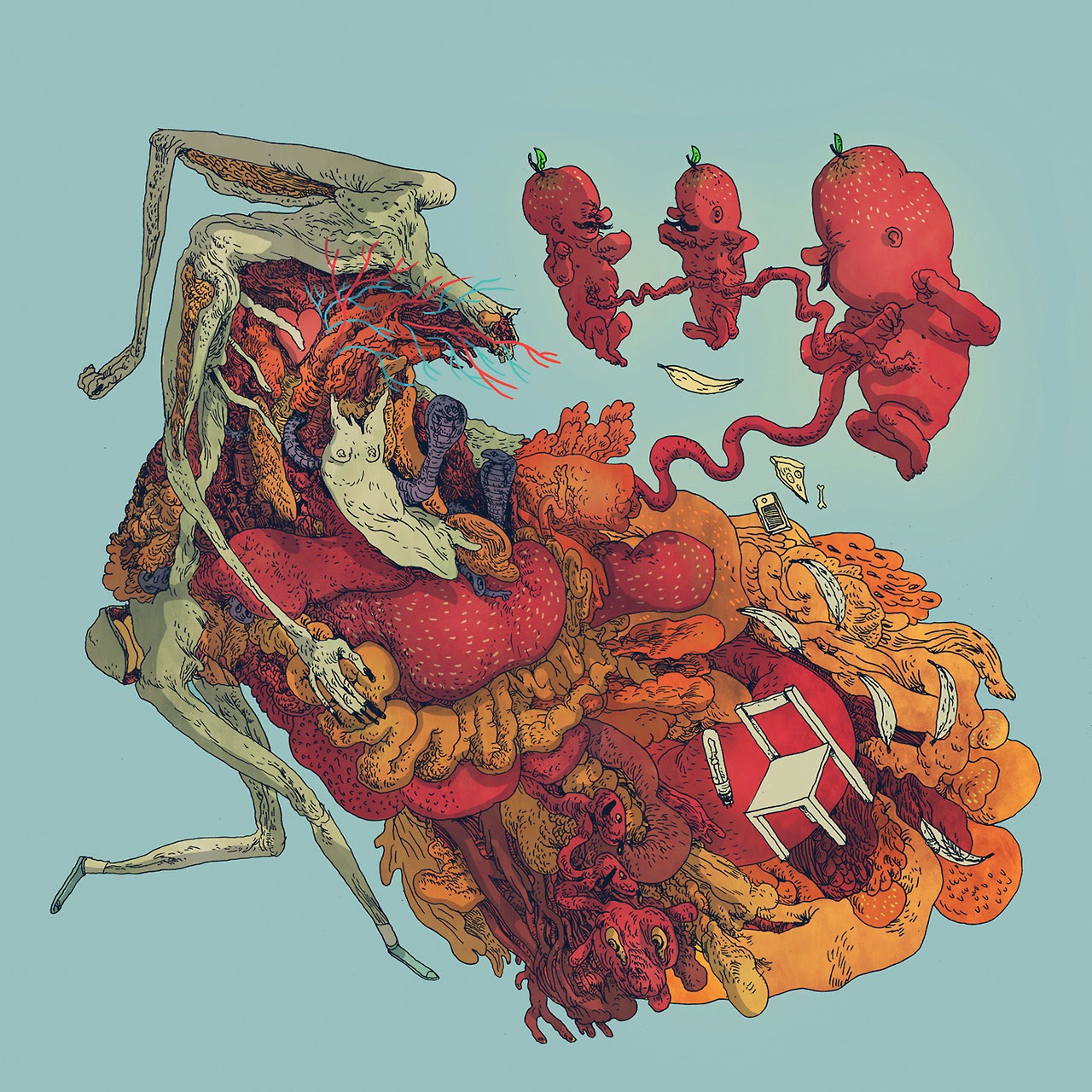 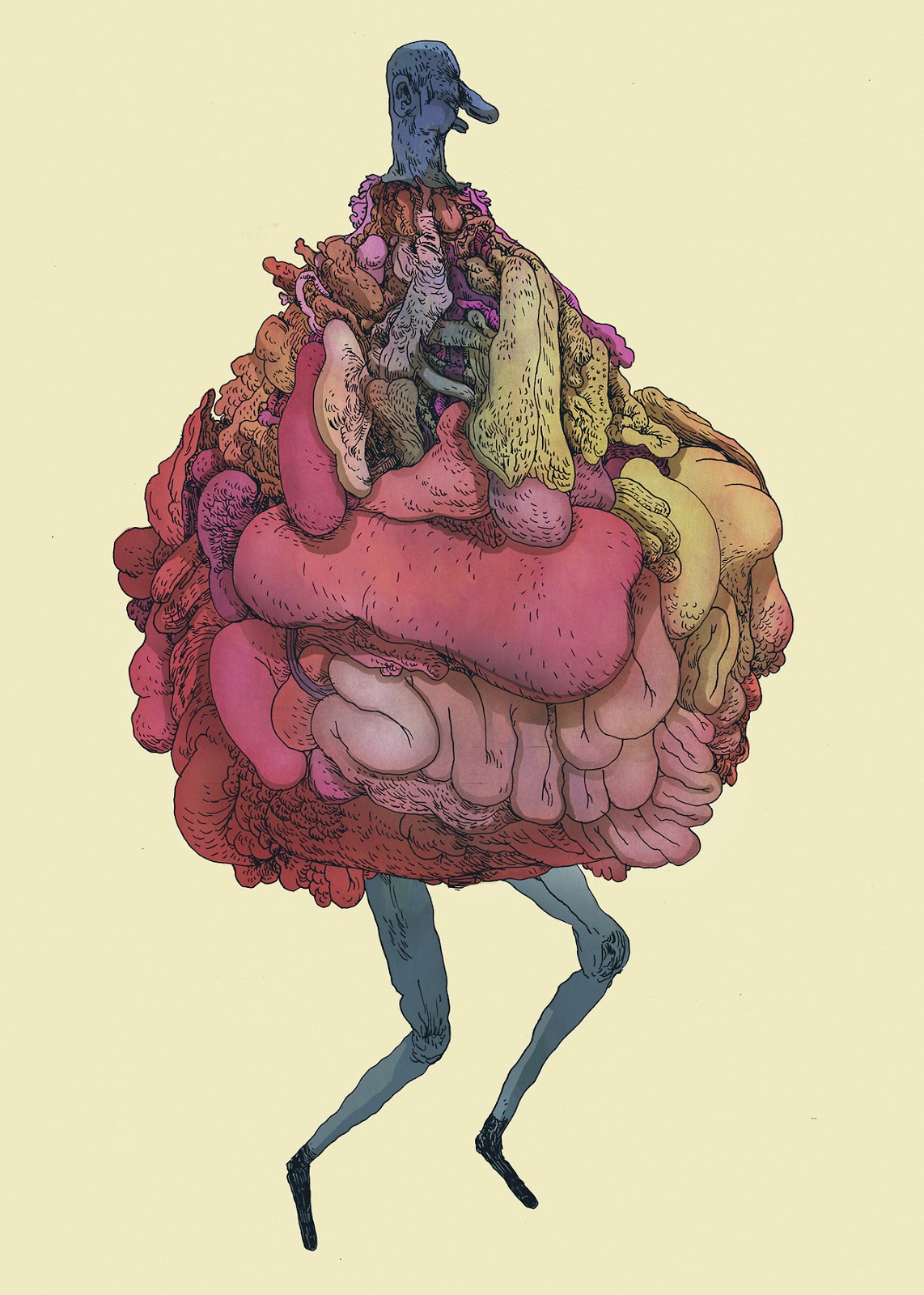 Two of the common denominators I've noticed from your illustrations on your blog and book are people- you seem to enjoy doing crowd scenes a lot, packing in a lot of people into one space, and deconstructed or exploded objects and people- taking things apart, showing the innards and bits, going beyond the surface. It seems to be a bit of a theme.

The crowd thing started a couple of years ago and was something I started doing gradually, I had been drawing a lot of characters and environments in my sketchbook and was annoyed by how much space was left on each page so I started challenging myself to completely cover the pages.

At first I would just do portraits or characters standing around and then I started adding more characters and then I had to start adding backgrounds and then it turned into these crowd scenarios which was just really fun to do, figuring out what was happening on each page and how the characters were interacting, just start somewhere on a page with an object or a character and then I had to figure out how to fill the whole page, very chaotic. Then I started connecting pages together, imagining that all the drawings were connected and that’s how I see it in my head now, that all these crowded rooms are next door to each other in their world that I can add new rooms and levels to, a few every week. Sometimes I think of scenarios in advance, like it’s going to be a dentist office or a supermarket and sometimes I come up with a theme or story halfway when everything starts to come together, sometimes there is no story at all but still really crowded so it’s a challenge for each drawing.

Deconstructing and picking apart things is probably from when I started out and was really interested in the technical aspect of drawing, learning shapes and form.

I got really into drawing things in layers, what things look like beneath the surface, I figured out that I could add more details to things if I showed or exposed more than one layer at once. I also really like anatomy and biology, that we walk around with all these shapes and layers inside that keep us alive and/or dead. So last year I started doing a lot of illustrations on that theme, just trying different ideas.

What do you draw influence from? I've noticed you also draw a lot of amazingly intricate architecture and buildings.

My mother is an architect so I grew up with some influence from that, architecture and construction and form, I get very focused when I have to figure out and work with perspective and angles and it’s very rewarding. My main influence is things that are personal and honest and maybe a little weird, things that stick out in some way. Internet media and video games and films and cartoons are also influential, I grew up with that and I still get inspired by a lot of media in general. Or at least I watch and consume a lot of media, not sure if that’s the same thing.

I also draw a lot of influence from history, that’s always interesting and there’s so much to find. 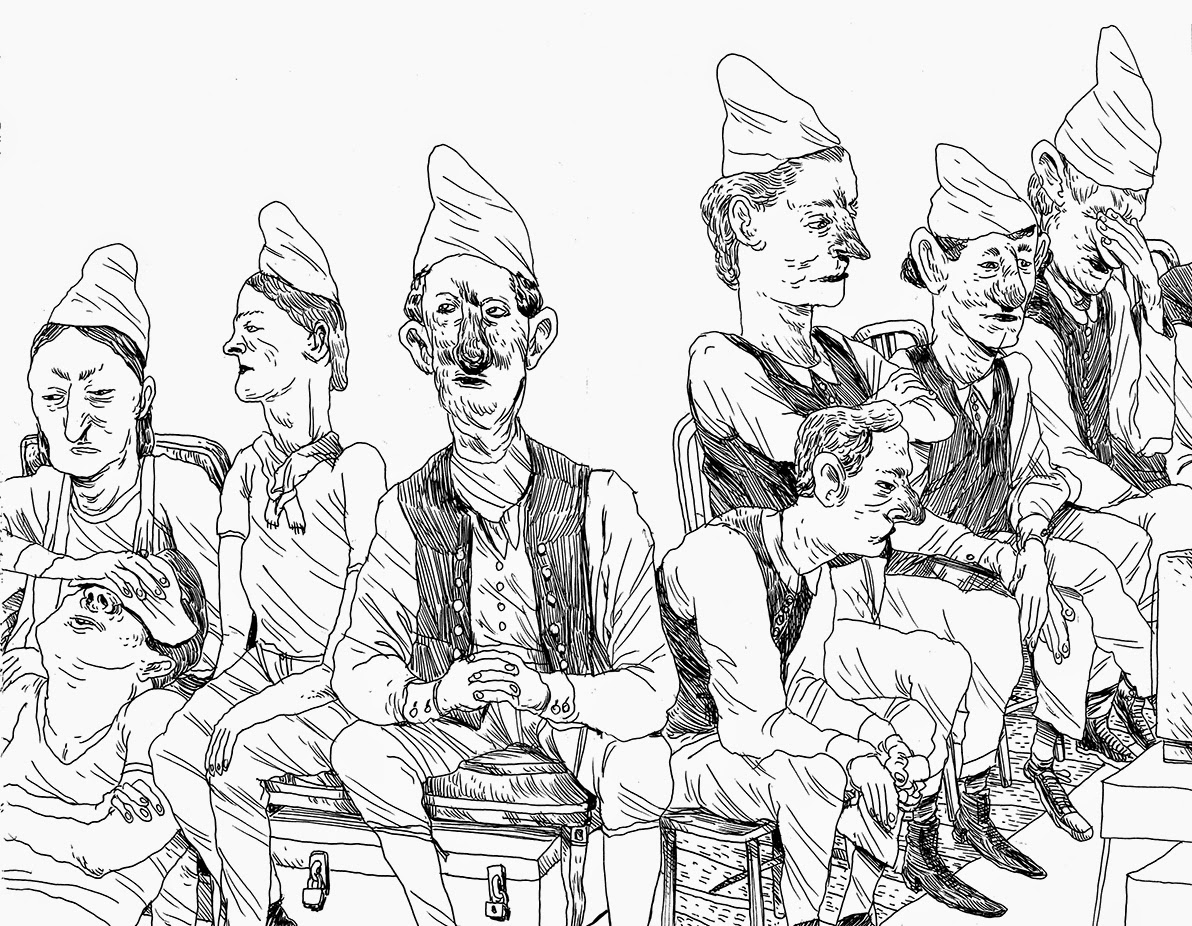 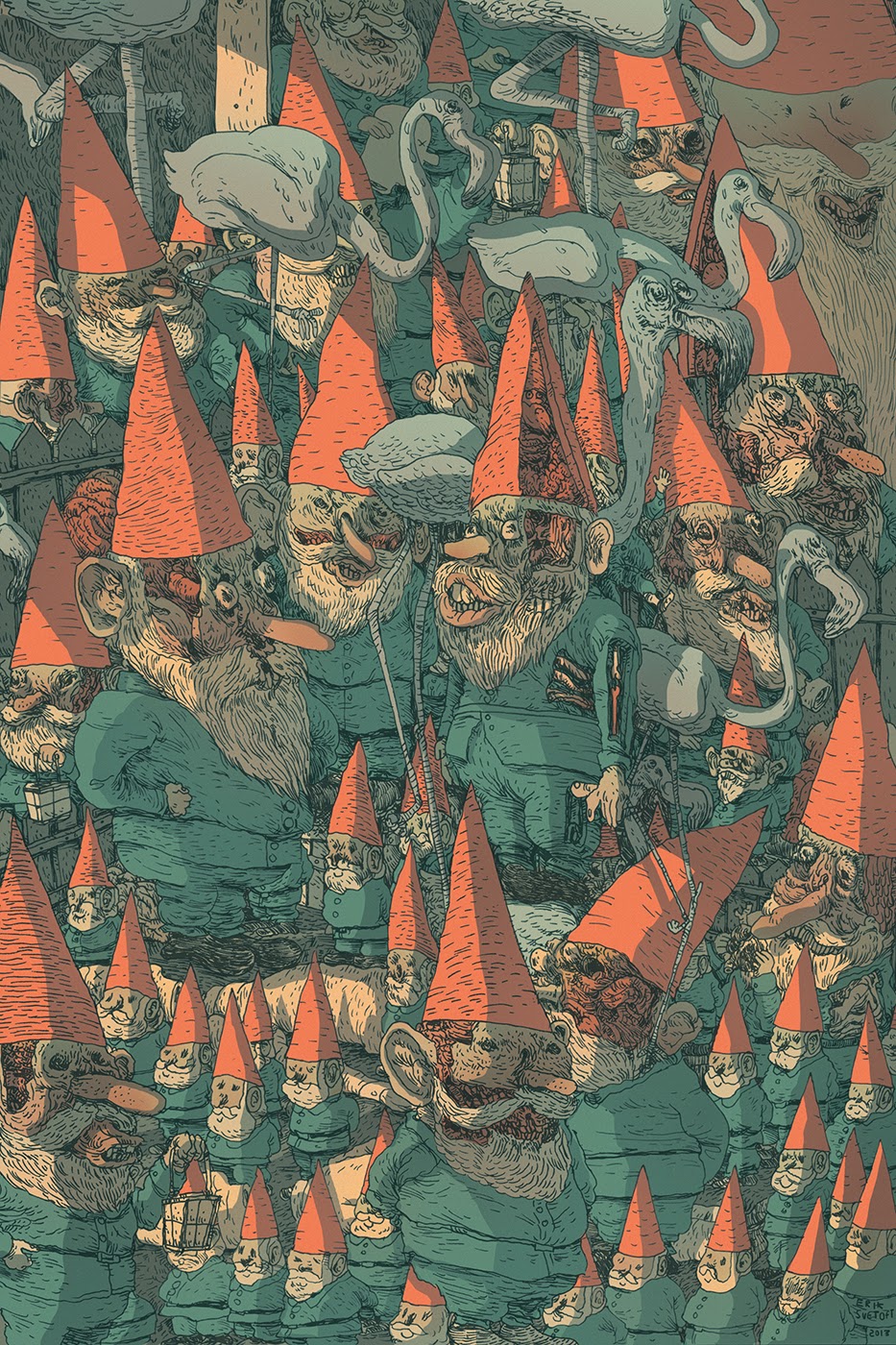 You illustrate in both black and white and colour. Do you have a preference for either? How do you decide if a piece requires colour?

Mostly I prefer coloured drawings just because they feel more like ”finished pieces” but it depends, a really good black and white drawing is always nice, it has a quality to it.  A lot of it has to do with context I think. I want to try to work the other way around because most of the time the images start out in black and white and then everything is coloured in, it might be the next step to turn that around so I don’t have the option to not use colour.

Do you have any plans or goals in terms of what you want to do/achieve in design and illustration, or are you taking a more organic approach?

I just try to draw as much as I can every day and then find new places and opportunities to use those drawings and just keep thinking of new ideas and new projects. I don’t have any long term goals except to improve and challenge myself artistically, I see illustration and drawing as a tool that can be incorporated into a lot of different fields and I always try to find new directions, just see where it goes and what I get interested in. Of course there are some dream projects, bigger things.

Right now it feels like it would be really fun to branch out more and maybe work with game design or concept design and do more animation projects, I haven’t decided what to go for first but we’ll see! If I could I would do everything but time is finite and I can only draw with one hand unless I train myself to draw with both at the same time. 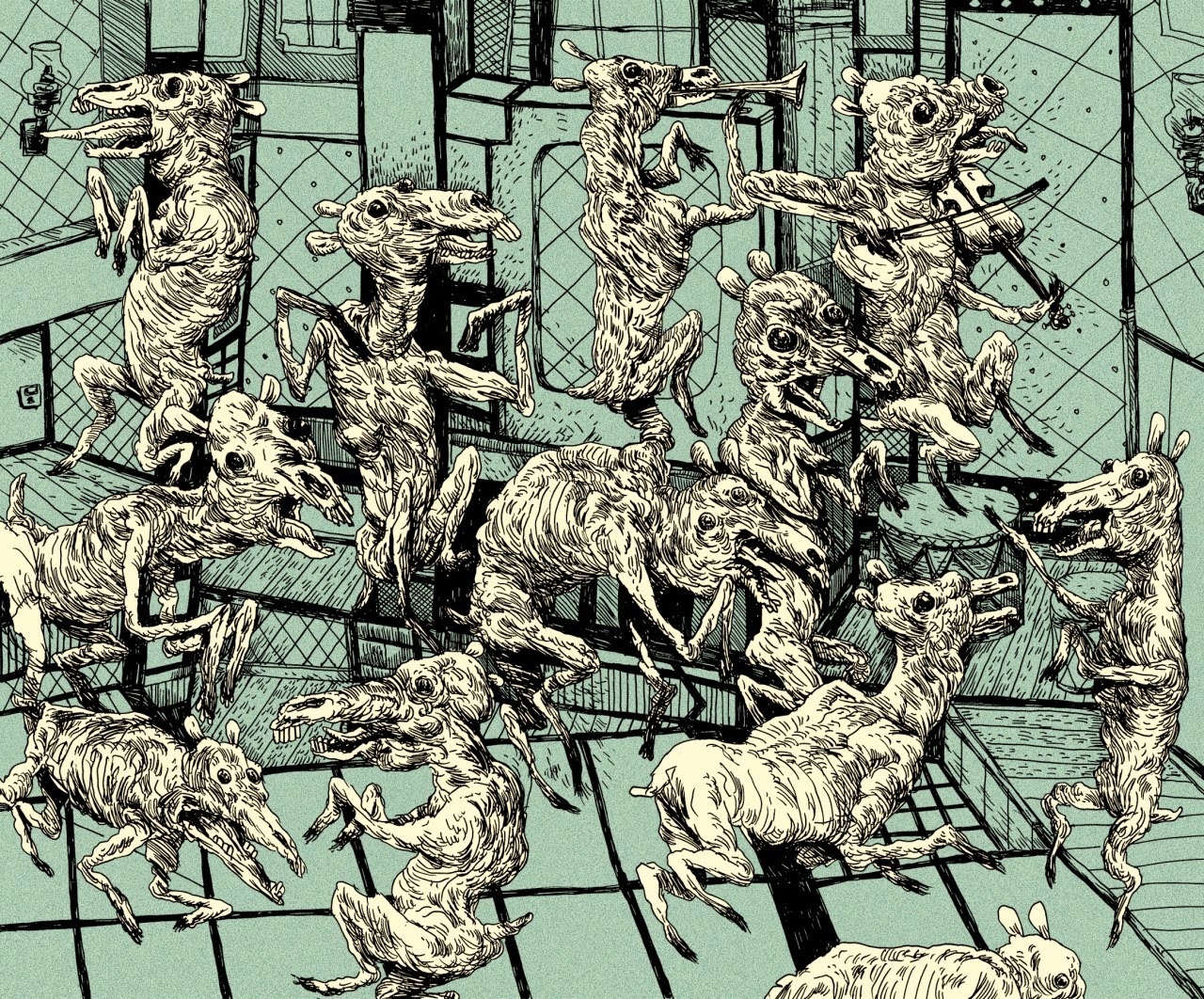 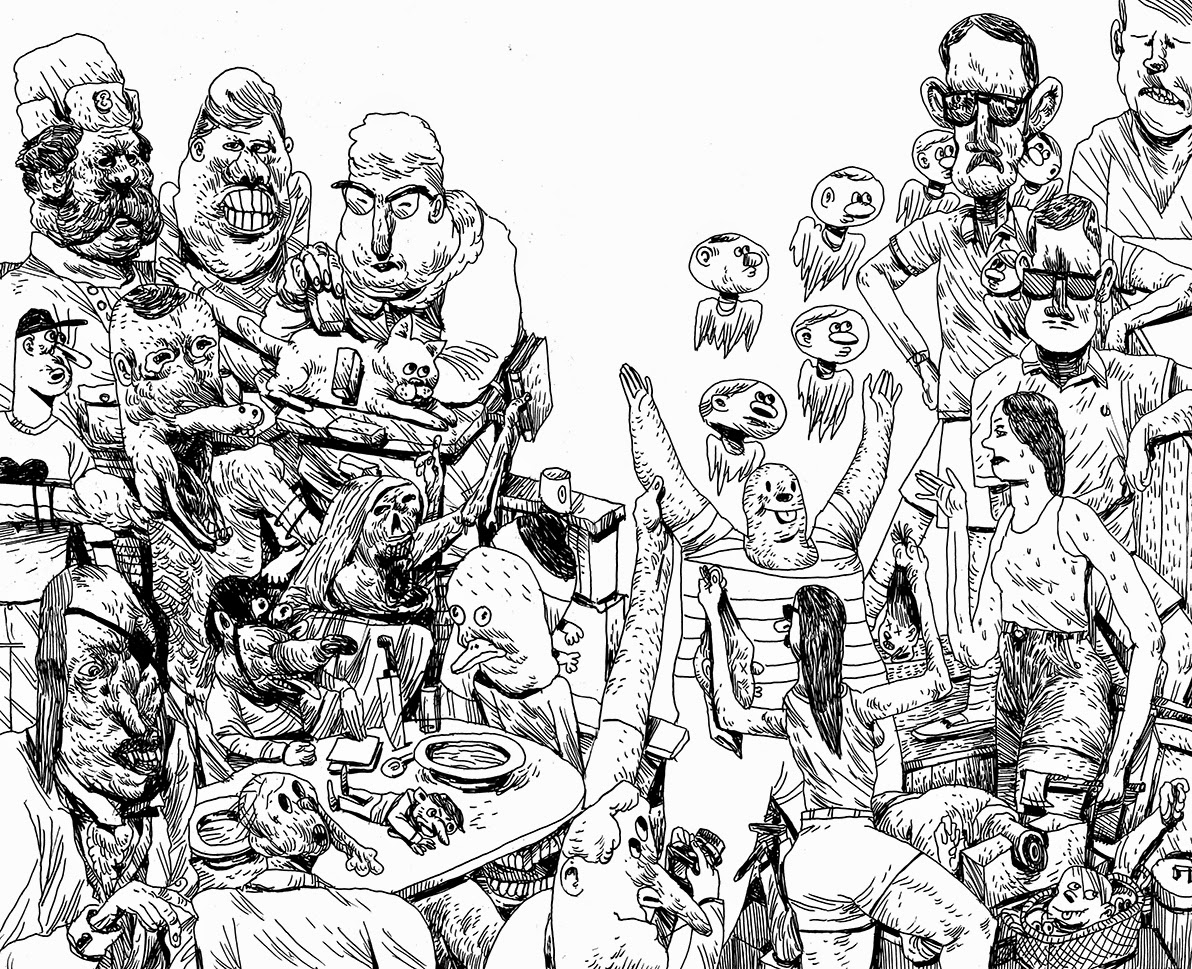