Koyama get it right for the kids; Martz and Wilson come up trumps 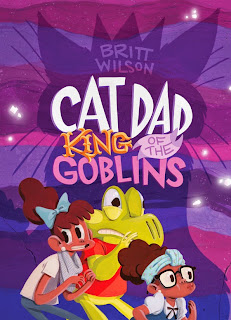 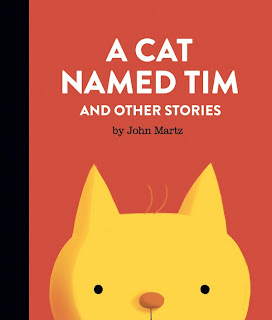 Canadian publishers Koyama Press marked their first foray into children' comics this October, publishing two excellent, very different books by John Martz and Britt Wilson. Within comics, one often hears of a bemoaning in regards to a lack of suitable material for children, but frankly, over the past few years that has become a void argument (you need only to view the in flux 'Comics for kids' list at the top of this page to see the growing breadth of choice on display). Koyama's two new offerings are a shining, robust example of the variety in approach, genre, style, and narrative comics for children and young people can take.

Mart'z A Cat Named Tim is aimed at younger readers, from 3 and above; largely wordless, it sees a cast of animal characters: a duck and a mouse, a married pig couple, the titular feline, Tim, and a pink bunny engage in variety of adventures and scenarios: from waiting for the bus to exploring underwater. It's a lovely, hugely engaging book, with a timeless quality- this will read equally as well in 15 years time as it does now.

My nephew is four and only just learning to read, but the stories and sequences here delighted him and he loved telling me his own version of events, poring over the details in concentration, in turns silently absorbing and chatting and laughing. He especially loved Duck and Mouse and the contrast of big and small their friendship presented. It's interesting watching him choose from where to begin and start with panels. I like that Martz's book is subtly instructive in teaching how to follow the direction of the action and playing out of events, as well as ideas about time and space. A double page spread in which Duck and Mouse go boating shows them 6 times in various stages of the trip as they float along, but kids know it's the one and same Duck and Mouse, not a multitude of duck and mice. That's again simply reinforced in Mr and Mrs Pig waiting for their bus as the seasons change- one page it's summer, then autumn, then winter. The bus is taking quite the while, and Mrs Pig now thinks she may have left the oven on, so they rush home as the bus pulls by. Mart'z comics are essentially joke narratives in comic form, so the timing and pacing is also crucial to the loop of his story, and he never misses a beat.

I've long been a fan of Martz's illustrative style: crisp and appealing, always infused with stout humour and personality. His images take on an almost pattern-like consistency in the control and precision of his lines, a facets that's perhaps more prominent here due to repetition, and square panels being sewn together in a patchwork-like manner, with blocks of colour as background. The underwater sequence in a black sea with beautiful coloured lines of fish is gorgeous, and reminiscent of  old-school video games designs. The way each character is drawn is exquisite: easily identifiable, with little markers of personality: expressions and tiny nuances. I have a particular affinity for ducks: they're so funny-looking that they take on various characteristic really well, especially comedic facets; it tickles me that the duck is named Doug (sound it out)!

The book itself is beautifully produced, a sturdy hardback with a black cloth bound spine and lovely interior printed end-papers, with a 'this book belongs to' nameplate. You'd be hard pressed to find a better example of a superb children's picture book. 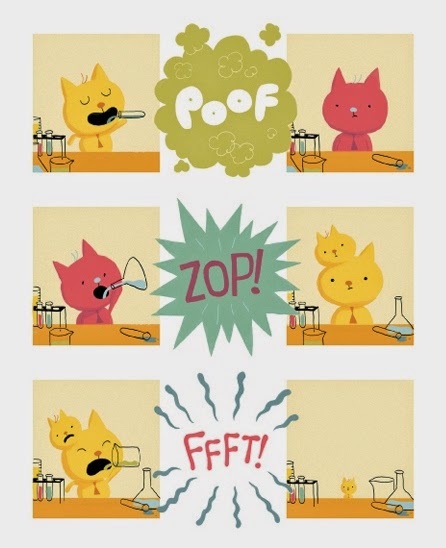 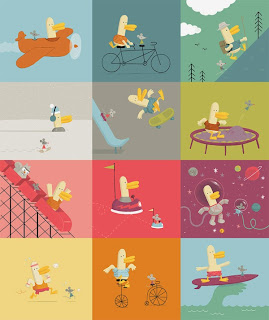 Britt Wilson's Cat Dad, King of the Goblins is geared more towards older children who can read independently- 7 years upwards, I'd say, although I'm sure younger kids will find it hard to resist the sheer enticement of Wilson's dynamic art; I'd imagine it's very hard to put down and not engross yourself in once opened. The force and power of Wilson's art is such that it grabs you from the off and pulls you along on a riotous, charming, and inexplicable ride.

Sisters Miri and Luey, age 10 and 5 respectively, and Miri's human-sized frog friend, Phil are busy contentedly reading, writing, drawing around the table, when their cat rushes in, breathlessly being chased by their mother: 'Don't just sit there! help me catch your father!' she exclaims. You see, Miri and Luey's dad has been turned into a cat by their mum, for reasons unknown. Everyone is very accepting of the situation, and there seems to be a silent acknowledgement that sooner or later dad will return to his human state. But in his own time. They chase after him leads to the linen cupboard into which he escapes, and the girls are slightly surprised to see a lush, green world beyond (the cupboard is bigger on the inside) where it appears goblins have carried off cat-dad to make him their new king.

I really like the way in which Wilson opens the book, with  full page illustrations of each character and a few biographical bullet points about their likes and personality. It's a grounding element that allows you to familairise yourself with the characters quickly in what is a zany, rather, mad-cap adventure. Cat Dad is such a gorgeous book- richly coloured, with an incredible sense of movement and frenetic energy and lines, that feels so fresh and vital- it's difficult not to be embraced by it wholly. The story's a mixture of goofiness and (presumably) magic that you just go along with because it never questions itself- a surety that's anchored by the art. It manages to retain a warmth, thanks to it being simultaneously big and small in feel- the action never leaves the house, but world-spanning exploits are achieved thanks to the land in the linen cupboard. I like, too, that it has a familial focus which offsets the quirkiness some, featuring two individual sisters getting along and teaming up, and overcoming.

It's a bright, bold and funny book, that turns various scenarios and conventions on their head in neat, knowing ways: getting lost in a dungeon, finding a map, creating distractions. I can see kids appreciating the energy that's brimming from each page. Impossible to resist. A faultless double triumph for Koyama; I hope they continue in this vein. 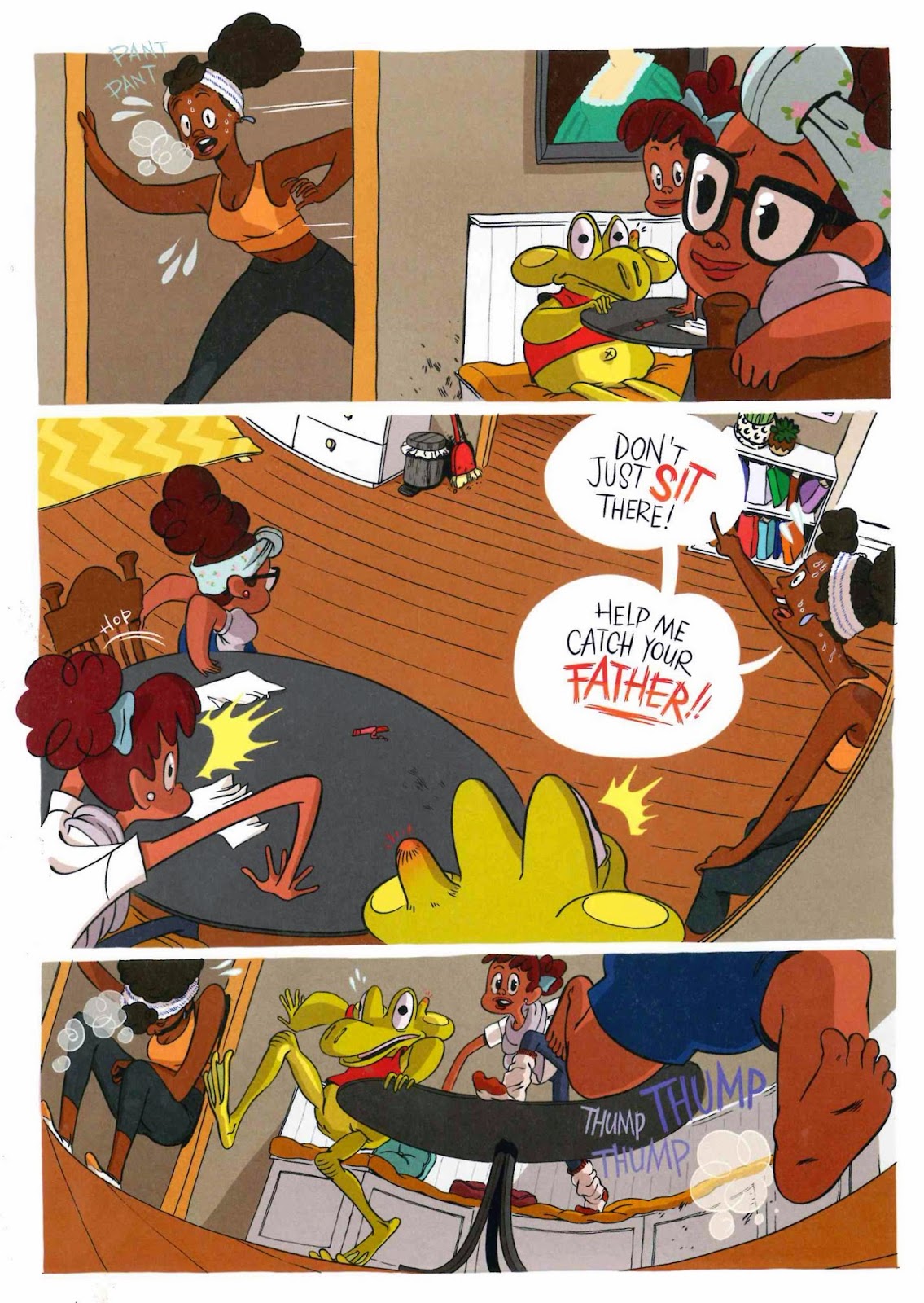